Lamborghini Athon, an Amazing But Forgotten Concept Car From 1980 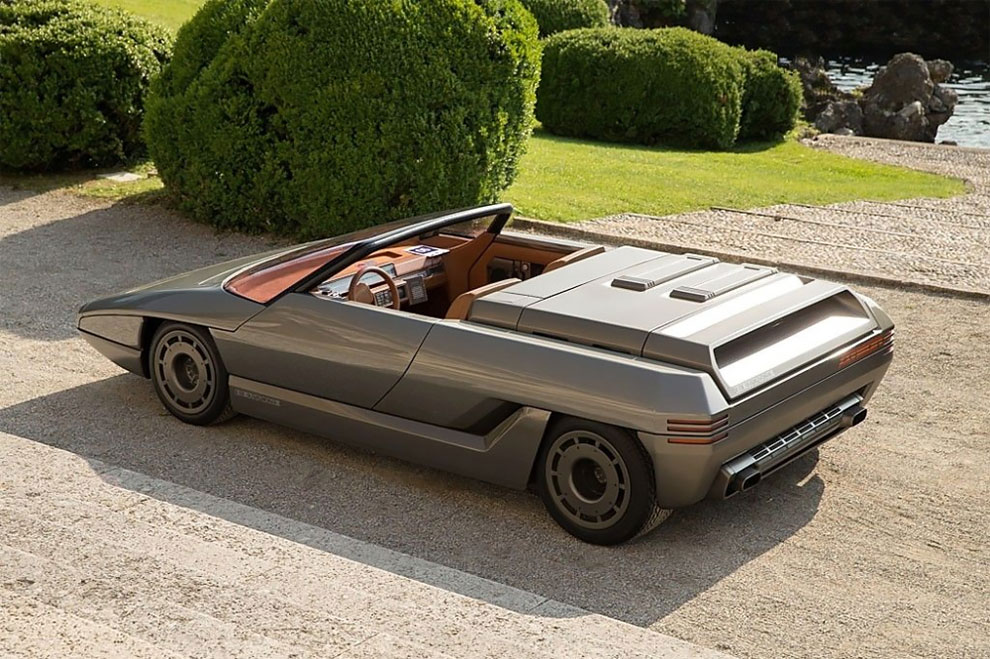 At the 58th Turin Motor Show, held in April 1980, Bertone introduced a new concept car based on a Lamborghini chassis – a slightly unusual choice, given that Lamborghini was in dire financial straits at the time. The press release from the Turin coachbuilder made it clear that Bertone wanted to support the company. The name Athon, referring to the Egyptian cult of the sun, was appropriate as the car was a spider, completely devoid of a top and intended as a fair-weather car. 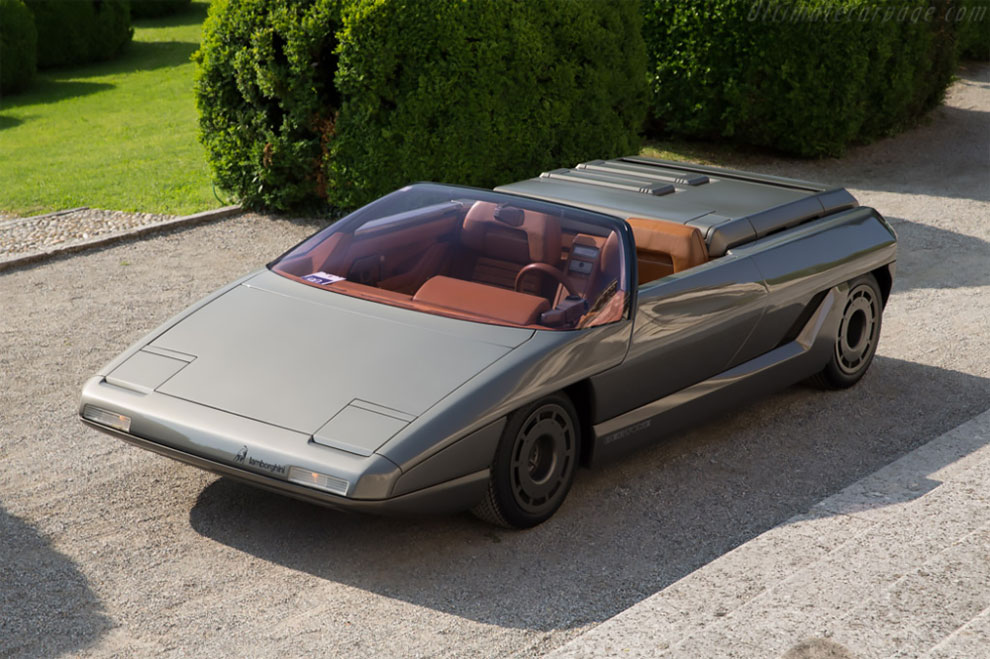 The Athon was the first Bertone concept car created under the direction of Frenchman Marc Deschamps, following the departure of Marcello Gandini at the end of 1979. Some observers had expected Bertone to embrace a different school of design, but under the guidance of Nuccio Bertone, Deschamps seemed to follow closely in the footsteps of his predecessor. The Athon was thus based on similar aesthetic codes to the Bertone concept cars shown since the 1970s, with tense surfaces and highly sculpted geometric volumes delineated by clear edges and cut-lines. Likewise, the Athon explored themes close to Bertone’s heart in the treatment of glass surfaces as integrated parts of the bodywork or as openings. 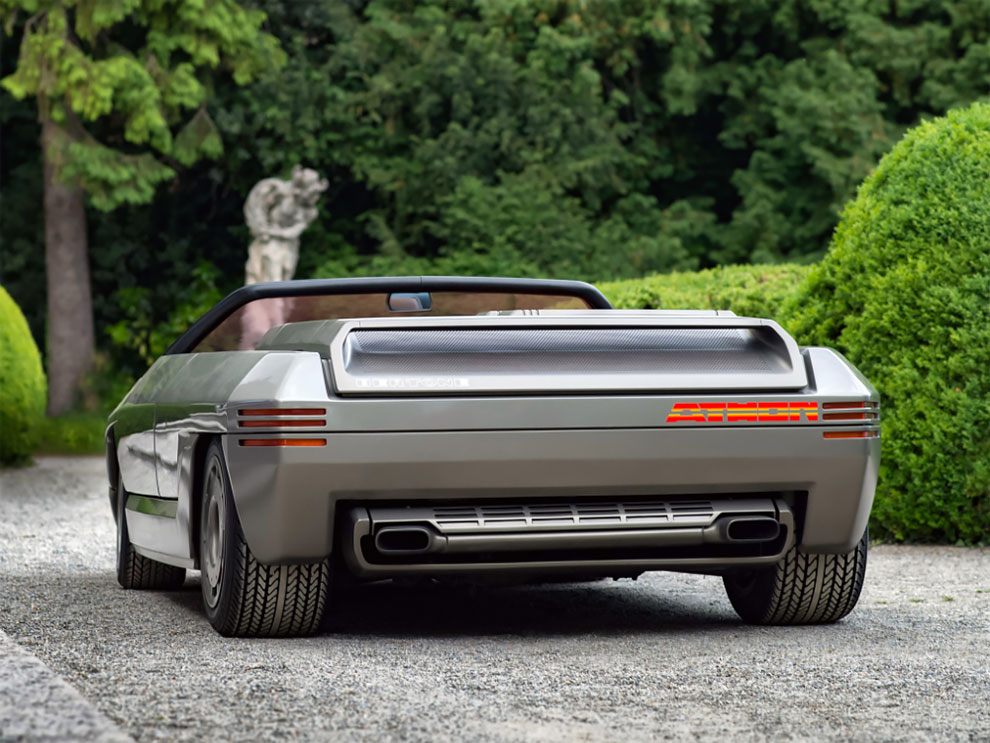 Mechanically, the car was based on the Silhouette, itself closely derived from the Urraco. The three-litre V-8 gave 260 bhp at 7,500 rpm fed by four Weber carburettors and was mated to a five-speed manual gearbox. The wheelbase was unchanged, but the overall length was under four metres due mainly to the short rear overhang. With no soundproofing, driving the Athon at any speed was a glorious aural experience, as noted by Italian magazine Quattroruote in its July 1980 test review. Without any serious modification to the mechanicals, the car was reported to retain all the positive attributes of the Silhouette in terms of road-holding and handling. 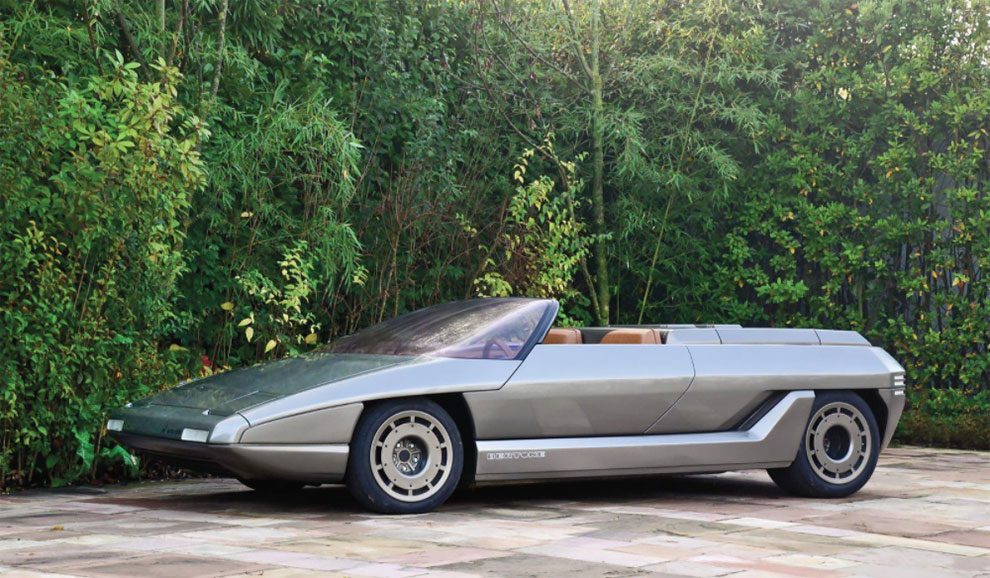 The Athon’s proportions were unusual for a spider, with a forward-set cabin and a long and relatively tall rear deck underlining the mid-engine configuration. The engine cover was treated as a separate item, painted semi-matte to subtly offset it from the rest of the bodywork. Designed in such a way as to intentionally blur the boundary between the body and the mechanicals it contained, it even incorporated “dummy” air-filter boxes on its top surface. In contrast, the smooth wraparound windscreen made use of state-of-the-art glass technology and was smoked to integrate even more with the warm gunmetal grey body color. 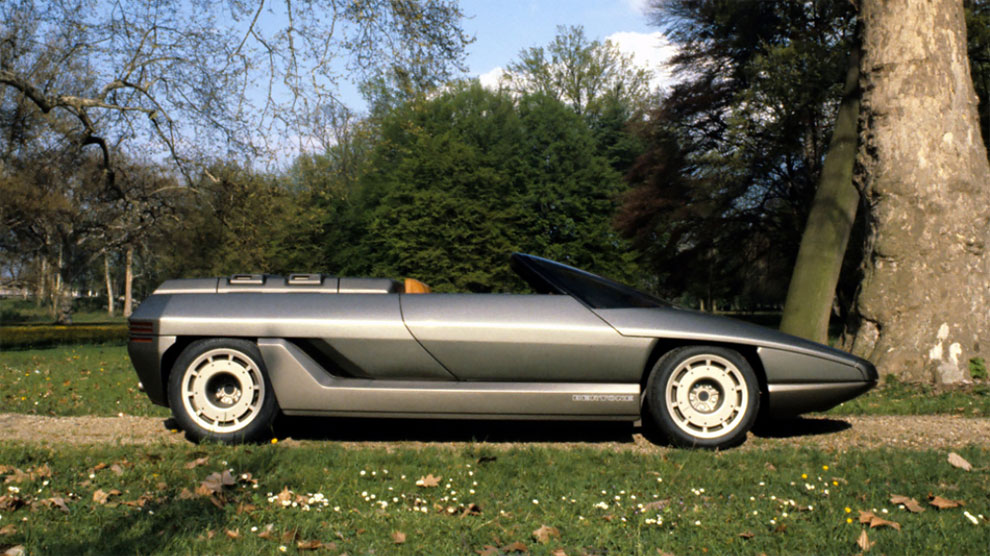 It was a highly graphic but also a highly sculpted car: whilst the overall shape might appear somewhat monolithic – a sure sign of Deschamps’s intention – surfaces were deeply recessed on the flanks. The interaction of volumes between doors and side sills is especially dramatic. Taillights were but thin grooves recessed in the rear corners, so as to interfere as little as possible with the solid appearance of the rear end. The two-piece alloy wheels were manufactured by Campagnolo and were close enough to production form that they would be adopted on the new Jalpa a year later. 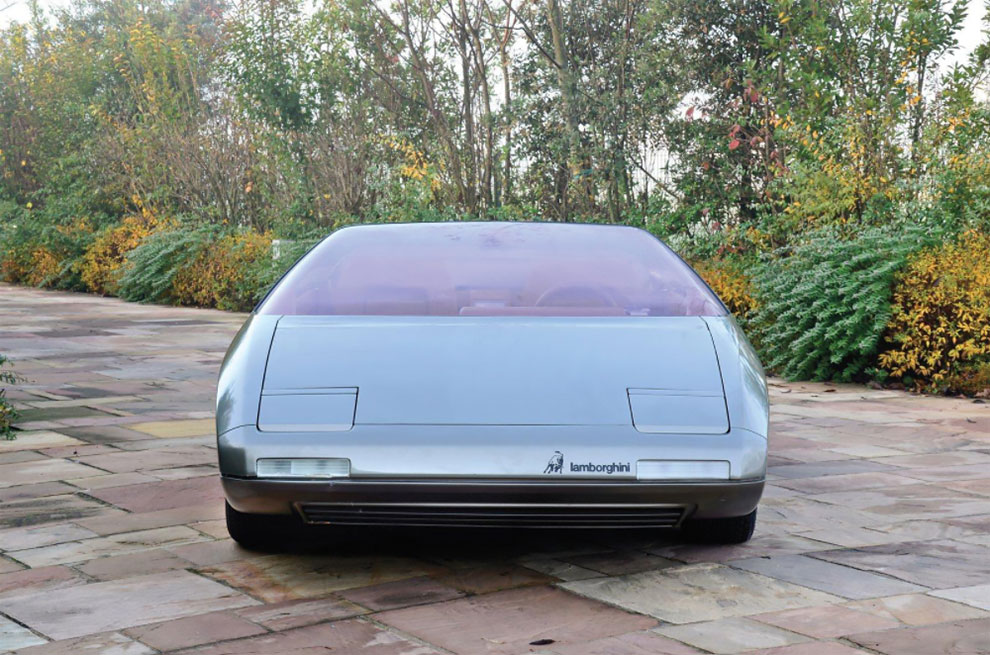 Although built in a short time span, the Athon shows the same quality of construction inherent in all Bertone prototypes, with a surprising level of attention paid to the interior detailing, both ergonomically and aesthetically. The innovative digital instrument display was developed with the Italian supplier Veglia, while secondary controls normally found on stalks – such as the windscreen wipers and indicators – were instead grouped in a pod a hand-width from the left of the steering wheel. These details, as well as the single-spoke steering wheel itself, were good examples of Bertone seeking to push the envelope with regard to interior ergonomics. 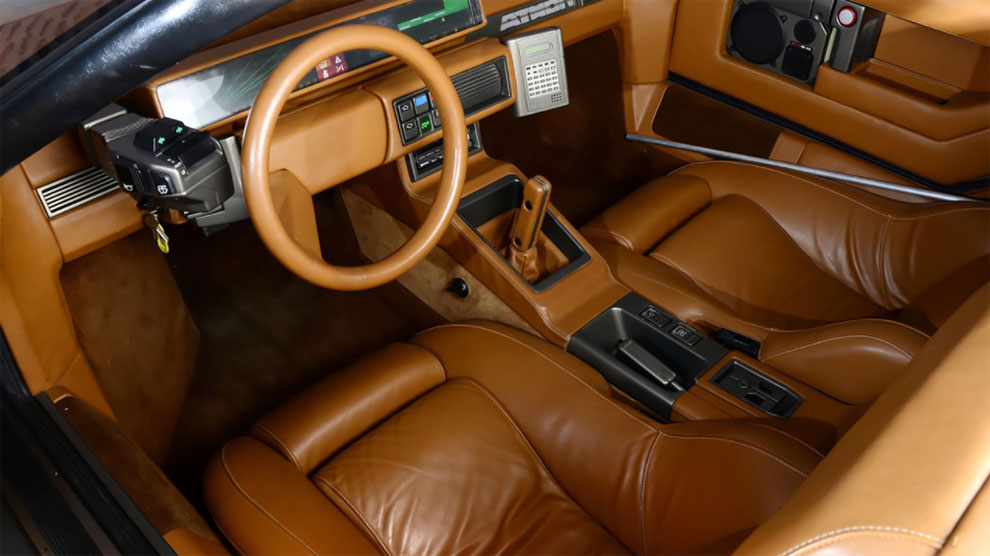 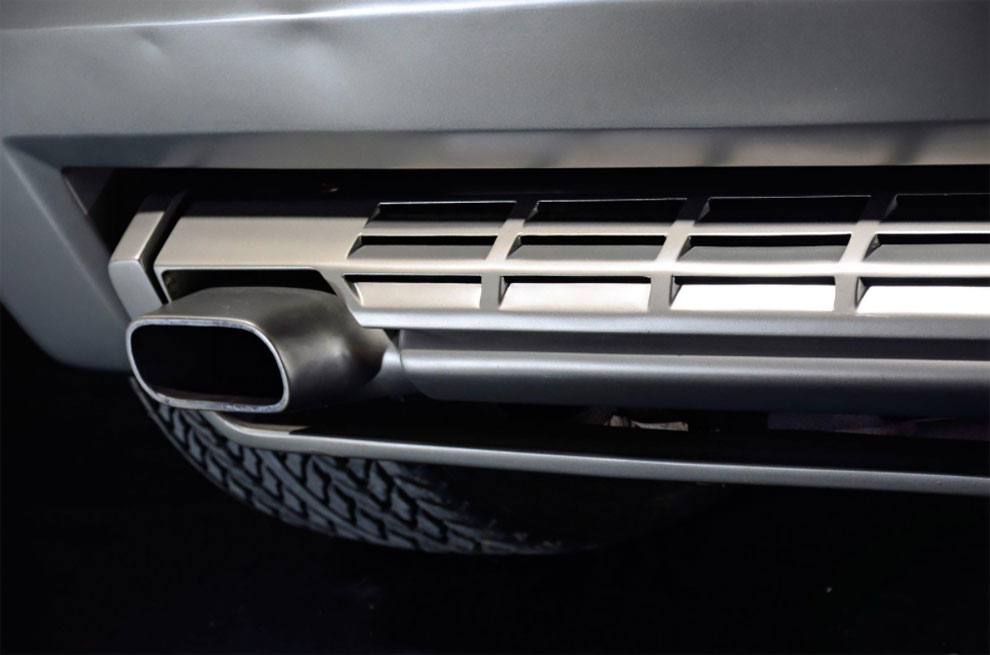 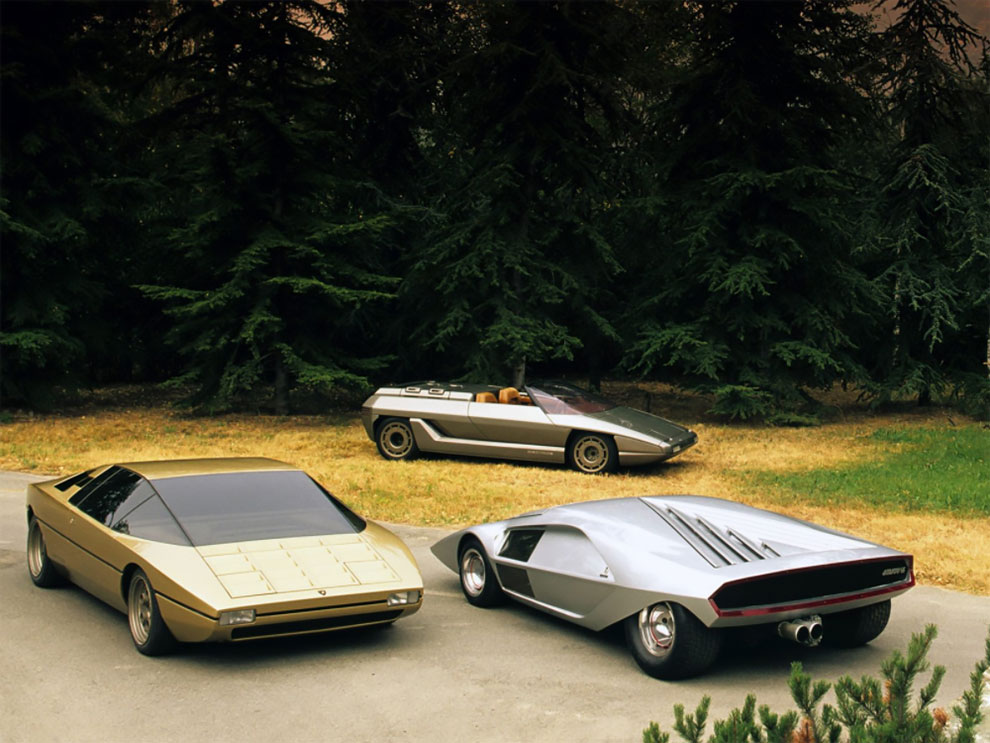 "Belfast Kids": Photographer Dave Sinclair Shows Us the Faces and Lives of Children in The City Affected by Social and Political Change and Upheaval
A Photo Set of The 1960 Dodge Dart Phoenix D-500, a Reflection of The Jet-Age Styling of The Late 1950s
Stunning Photos From The Seventies London Motor Shows
Photos Of 20 Wonderful Reliant Regal Cars
Cheerful Photos of Teenage Girls in the 1940s
Nano Hummingbird
Top Secret USB
Cool Retro Photos Capture People With Their Station Wagons From Between The 1950s And ’70s
Selfies From The Past: Celebrating A Birmingham Community’s Selfies From 40 Years Ago
A Physicist Does 3D Printing Project With His Son: Builds A Full-Scale Lamborghini
Fantastic Minimalist Japanese Cruiser 1989 Nissan Neo-X Concept That Was Ahead Of Its Time
The Ultimate 1980s Barn Find: This Guy Found A Lamborghini Countach Hiding In Grandma’s Garage For 20 Years
Russian Tuning Specialists Put Tank Treads On A Bentley To Create "Bentley Ultratank"
Vintage Photos Proving That The Beauty Of People From Previous Generations Is A Unique Thing
Elephant Hotel: The Prime Example of Novelty Architecture in 1880s
The Wonder Years: Cool Snaps Show Lifestyle Of American Teens In The Late 1980s
Impossible Instant Lab: Turn iPhone Images into Real Photos
This Man Turned Characters Of Popular Series Into Kids by Using Midjourney Neural Network
"Pure White": When Asbestos Was Used As Fake Snow
Sleeping in Capsule Bed
Fight Like A Gentleman: The Art Of Self Defense, ca. 1940s
Meet the 1970 AMC Gremlin, America’s First Subcompact Car
Small is Beautiful!
Rare Hand-Colored Photographs of Japan on The Brink of Modernity in 1870s
1980s, Athon, cars, concept, lamborghini, retro