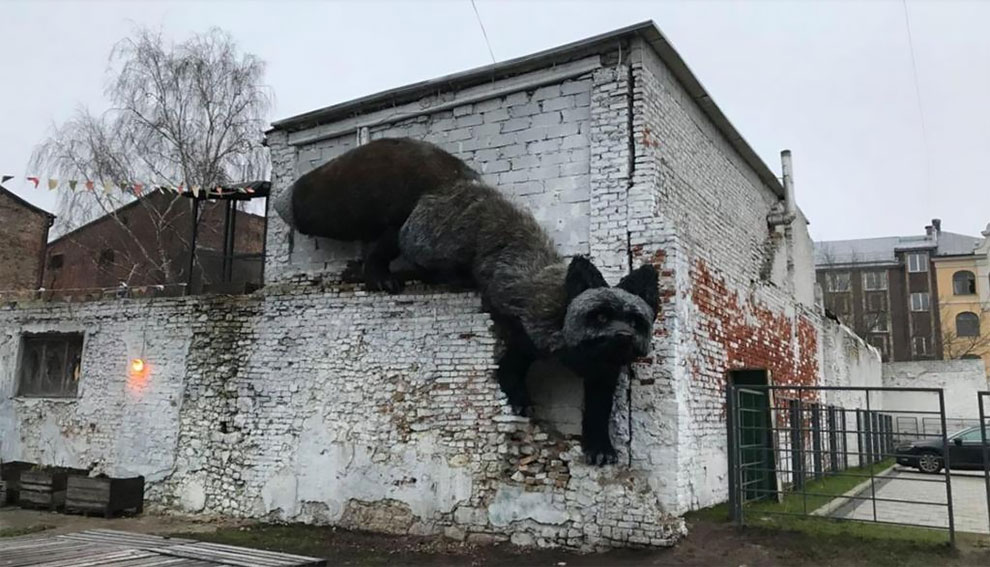 A new landmark has appeared in Riga. On one of the walls of Turgenev Street stands a huge black fox. This installation is made of a metal frame and broken hemp ropes by a student of the Latvian Academy of Art as part of an eco-action. 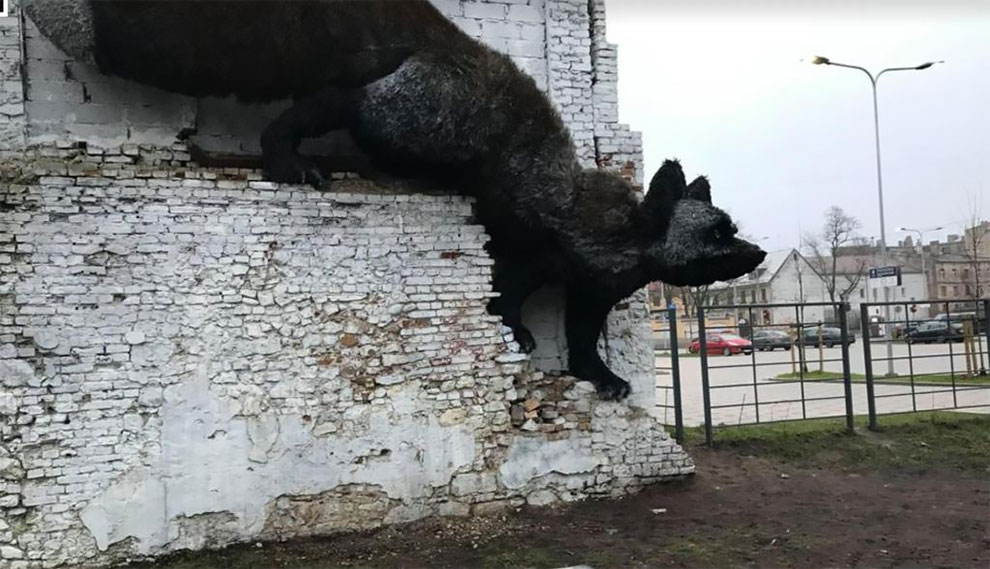 Since Soviet times, fur farming, including furbearers, has been developed in the Baltic countries. Today, however, this activity is harshly criticized by society and environmentalists. 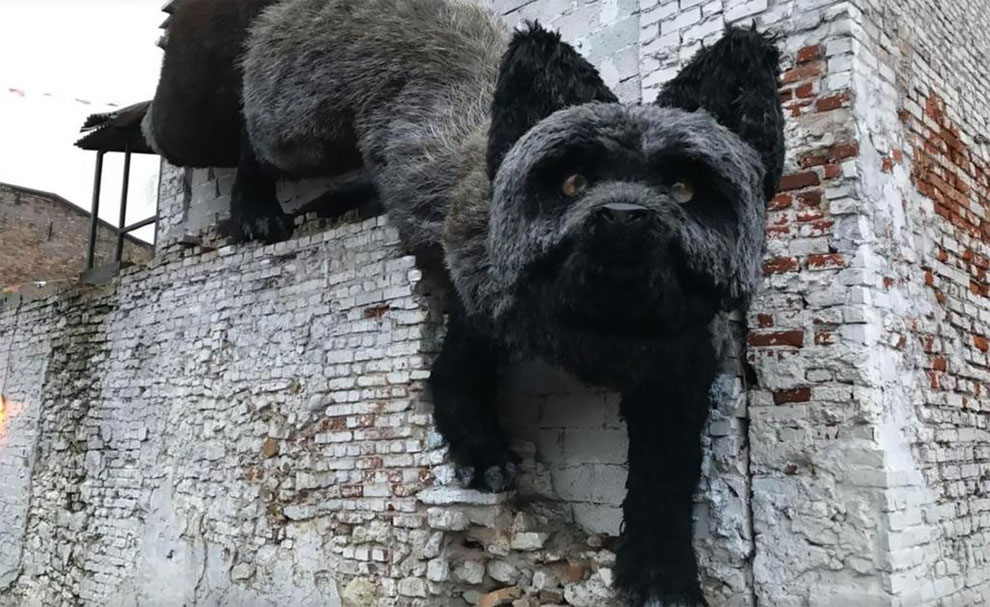 In cooperation with the organization “Freedom for Animals,” the Marinoha family, represented by student Alexander and father Oleg, made a spectacular art object, “The Fox,” which will remain at this site until 2027. 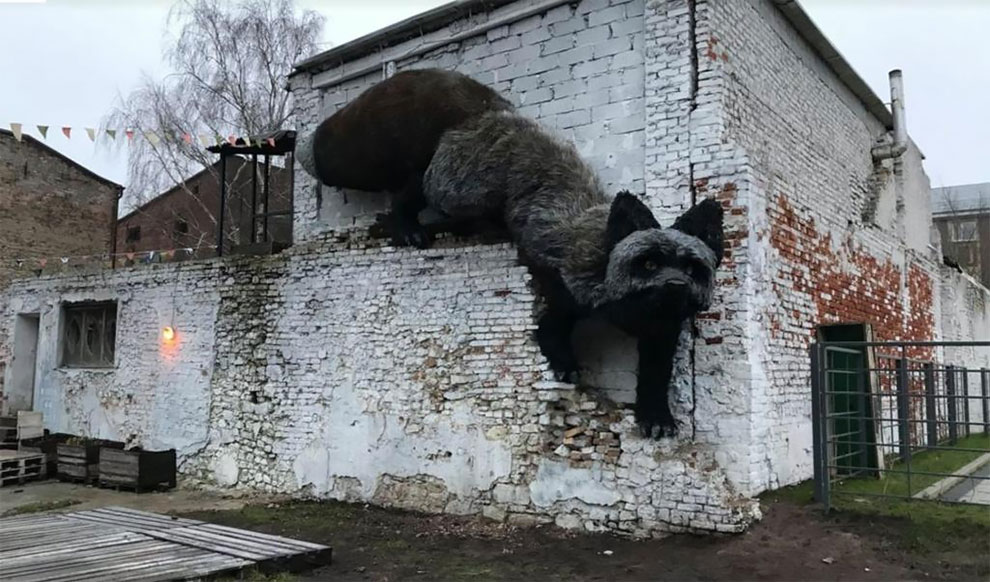 A Badass "Heroic Girls In Movies" Scratch Off Poster
This Cheeky Fashion Collection Reminds Us About The Dog-Eat-Dog World
This Carpet-Covered Lada Is the Most Soviet-Era Car Ever Made
This Craftsman Creates Absolutely Badass Steampunk Masks, Outfits And Accessories
9 Artists Teamed Up To Create Art And Raise Money For Non-Profit Organizations In Hopes Of Raising Awareness Of Important Issues Our Planet Is Facing
2020 Christmas Tree Ornaments That Are Actually Funny
Street Art Sculptor “Unzips” A Building In Milan For Mind-Bending Art Installation
Toy Retailer Hired A Designer To Create ‘Friends’ Barbie Dolls, And They Delivered
Even The Mailboxes In Japan Are Strangely Beautiful
This Graphic Designer Uses Her Design Skills To Make Awesome Cookies
Crochet Taxidermy: Perfect For People Who Hate Harming Animals
Working From Home Has Never Been Easier With This Office-Tent
Slash Of Guns N' Roses Got His Own Custom Bike Created By Adam Zdanowicz Of Mad Bicycles
Russian Street Artist Uses Transparent Wrap To Spray-Paint Animals
Three-Dimensional Human Collages Encased in Layers of Glass
Google Art Project Launched at the Israel Museum in Jerusalem
A Street Artist Creates Giant Mural In A Maximum Security Prison In California
Artist Designs Classic Cars Inspired By Exotic Wild Animals
Minimalist Tattoos By Irina Irchey And Eugenia Vorobej Beautifully Blends Geometry With Nature
Street Artist Unveiled A Giant Artwork On The Roof Of An Abandoned Radio Station
This Paper Artist Has Created Astoundingly Intricate Paper Costumes
"Ballads Of Shanghai": Changing Face Of Urban China
Longboard Combined with Stroller Makes Travel Fun for Both Kids and Parents
Pedro Pires Sculpts Large-Scale Skull Using 140 Life Vests And Rubber From A Refugee Dinghy
black, ecology, fox, latvia, streetart