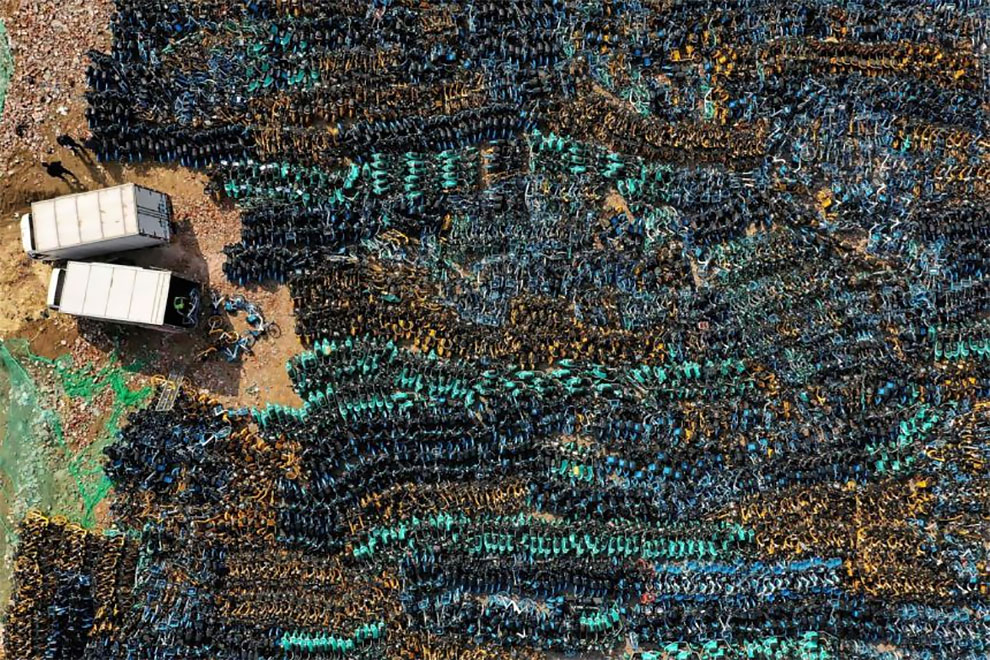 Handlebars tight in snaking rows of colour, thousands of abandoned bicycles line an open field outside the city of Shenyang, relics of a shared bike mania that has overwhelmed China’s cities. The turquoise, blue and yellow bicycles, arranged in long lines, some piled on top of each other, bear the logos of the companies that dominate China’s bike-sharing sector – Hellobike, Didi and Meituan.

Low cost-shared bikes, which users can unlock using apps and park virtually anywhere, burst onto Chinese streets in the middle of the last decade with investors rushing to fund bike startups like the now-defunct Ofo and Mobike. 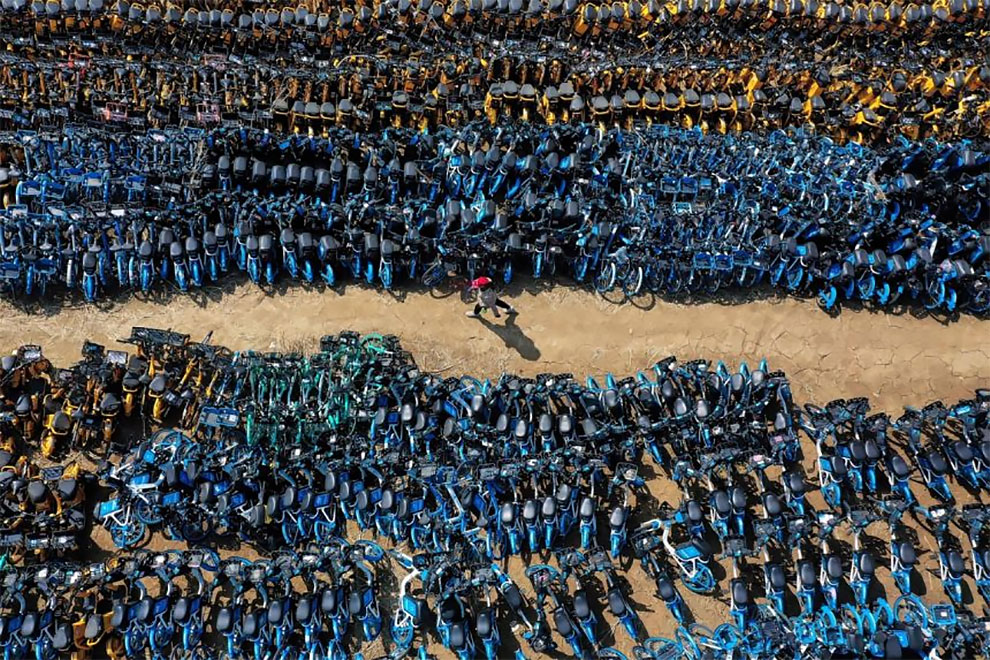 But the two-wheelers soon took over pavements and spilled over into bike lanes and streets, parked haphazardly by users who sometimes simply tossed the bikes into shrubbery, creating a headache for urban authorities and pedestrians.

Many bikes suffered damage or were stolen, while some were even repurposed into makeshift barricades when Covid-19 broke out last year.

The problem is a familiar one to cities around the world battling to round up stray bikes, from metro stations in Washington DC to the bottom of Melbourne’s river. 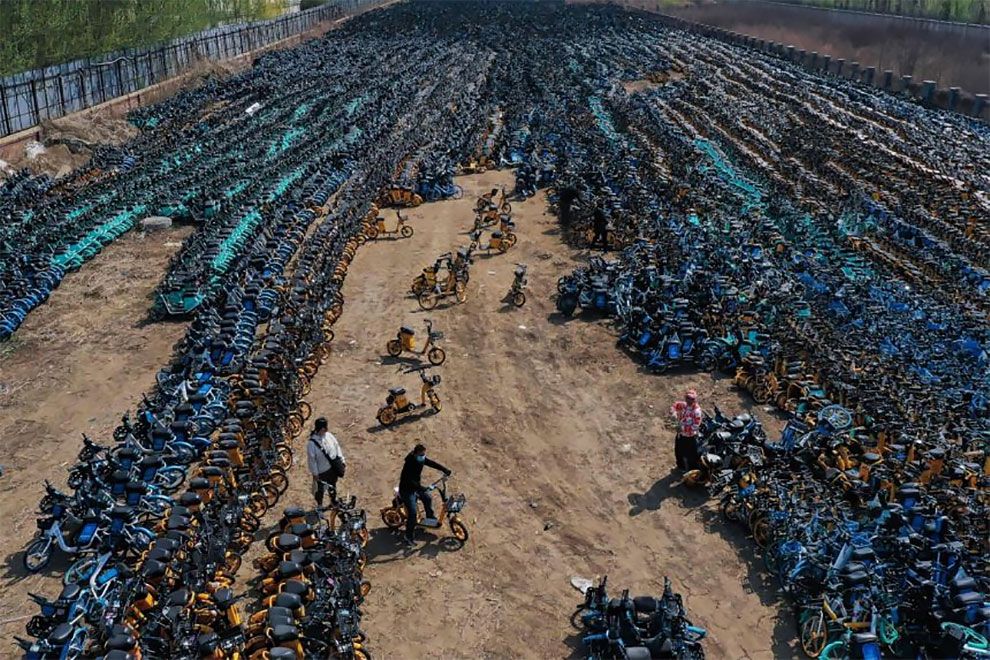 Aerial photographs from the suburbs of Shenyang, Liaoning province, show a bicycle graveyard, one of many which began appearing as early as 2018 as tech start-up darling Ofo imploded, defaulting on debts as its users claimed back rental deposits.

Mountains of damaged bikes belonging to other companies have also been discarded rather than repaired, in contrast to the “green” image usually associated with urban cycling. 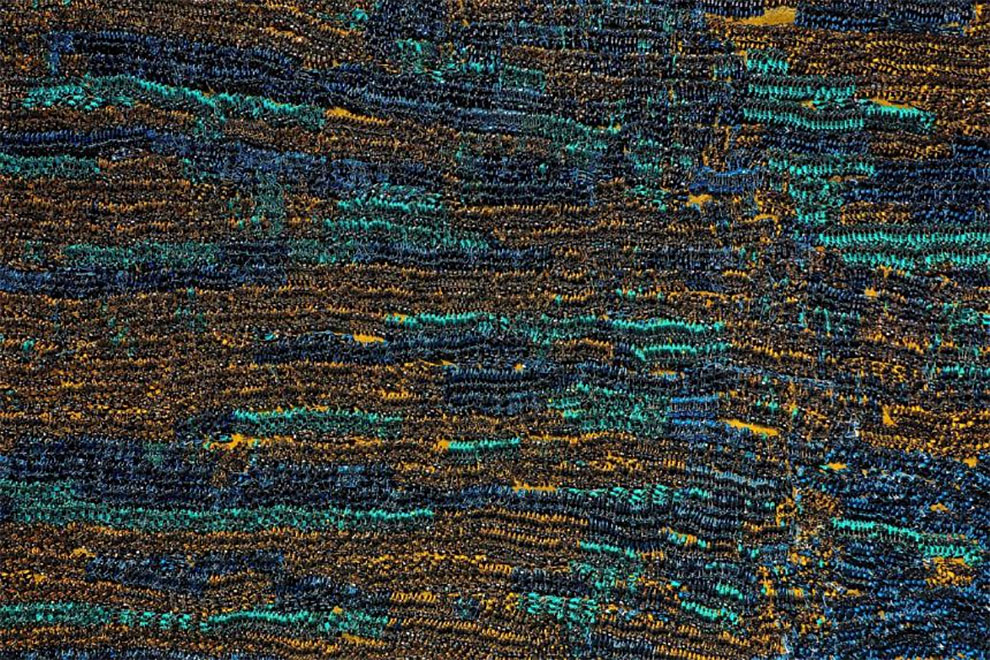 The bikes now jostle for space on Chinese streets with hordes of shared electronic scooters, which have also made their appearance elsewhere in the world including Paris and California.

Chinese cities have vowed to curb the chaotic fleets of bikes, with Beijing saying it will remove 44,000 bikes from the city centre this year in order to cap bike numbers at under 800,000, according to state media.

"Anti-Selfies": Artist Lies Facedown In Tourist Spots And Pretends To Be Dead
Winners Of The Pink Lady Food Photographer Of The Year 2018 Announced
Photographer Jack Davison Captures The Best Actors Of 2019 With A Minimalist And Inventive Approach
Bizarre Pictures Of The Beatles Cover Session For the Album “Yesterday And Today” In 1966
Photo Series Shows Pandemic Emotions, Starts Mental Health Talks
Bloggers Show How Their ‘Ideal’ Instagram Photographs Are Taken
The Best Photos From The First Half Of B&W Child 2018 Photo Competition
Photographer Jacqueline Roberts Uses 166-Year-Old Technique To Shoot Kids
2018 Nat Geo Travel Photographer Of The Year Contest: People
Beauty Over 100 Years Ago: 35 Stunning Postcards Of Beautiful Girls In Over The World From The 1900s And 1910s
Glow Worms Turn This New Zealand Cave Into Starry Night
The Finalists of The 2021 Comedy Wildlife Photography Awards Have Been Announced
Candid Photographs of Superheroes Posing With Their Young Fans at Malls in the 1970s and 1980s
A Daredevil Photographer is Determined to Capture London in a Whole New Light – by Scaling the City’s Many Rooftops
Beautiful Photos Of Marilyn Monroe In New York City By Ed Feingersh, 1955
Photographer Spent 10 Years Photographing The Romanian Countryside Which Looks Like A Fairy Tale
Once You See These Rare Historical Photos, You’ll Never Forget Them
Audrey Hepburn: Portraits of an Icon
Life in the Past Through Stunning Color Photos Captured by Fred Herzog
Moody And Cinematic Urban Landscapes By Kevin Hufnagl
Beautiful Winning Photos From The 2020 Head On Portrait Award
Brilliant Automotive Photography By Daniel Cali
Facebook's New Headquarters in Menlo Park, CA
Fabulous Portraits By Ukrainian Photo Artist Irina Dzhul
Photographer Transforms His Kitchen Into a Skatepark for Fruits and Vegetables
Ivorian Photographer Joana Choumali Shows Modern African Women Dressed In The Traditional Clothes Of Their Ancestors
This Year's Incredible British Ecological Society Photography Competition Winners
Black and White Photos Show the ’80s Street Fashion Styles of Young People
Life Of The 1850s: Amazing Photos That Show How The World Looked Like Over 160 Years Ago
Reuters Pictures of the Year 2014, Part 8
aerial, bikes, china, graveyard