The BirdLife Australia 2022 Calendar is Here! 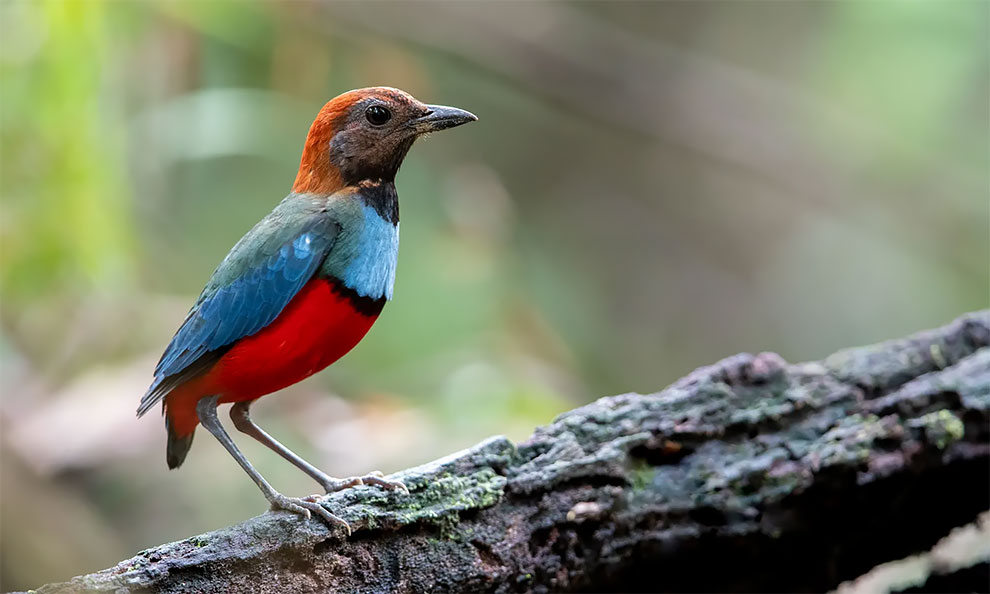 January: Papuan pitta. These small, ground-dwelling birds migrate from New Guinea to breed in the humid rainforests of the northern Cape York Peninsula during the wet season (between December and March). Despite their bright plumage, these secretive birds are more easily heard than seen ‒ but can be spotted alone or in pairs, foraging among the leaf litter for prey. Photograph: Laurie Ross 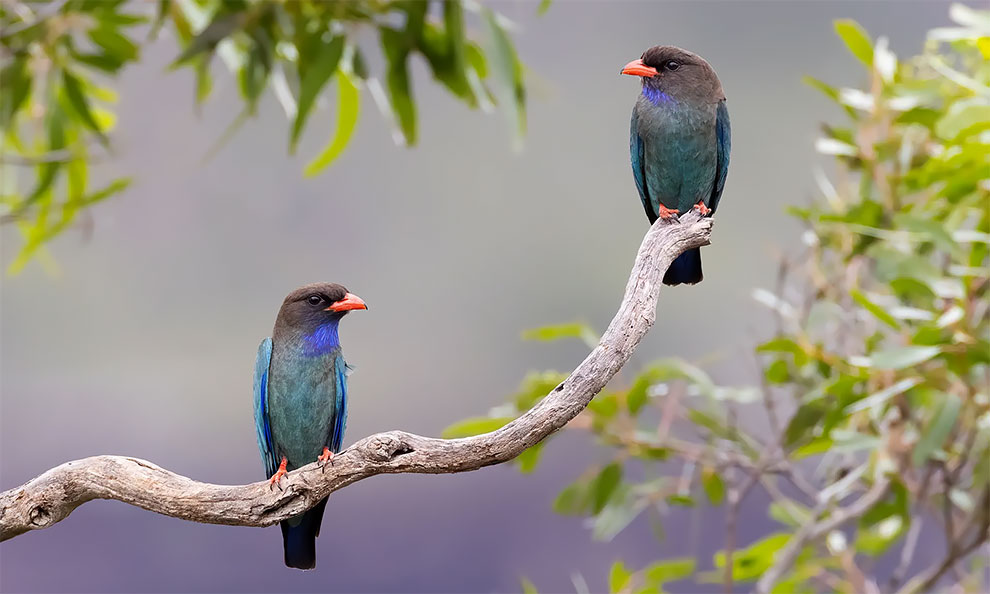 February: Dollarbird. Named after the large pale spot on each wing that resembles a silver coin, dollarbirds arrive in northern and eastern Australia to breed from September, before returning to New Guinea and Indonesia at the end of summer. These high-flying rollers are often seen on exposed perches like dead branches or powerlines, from which they launch in skilled pursuit of their insect prey. Photograph: Mark Sanders 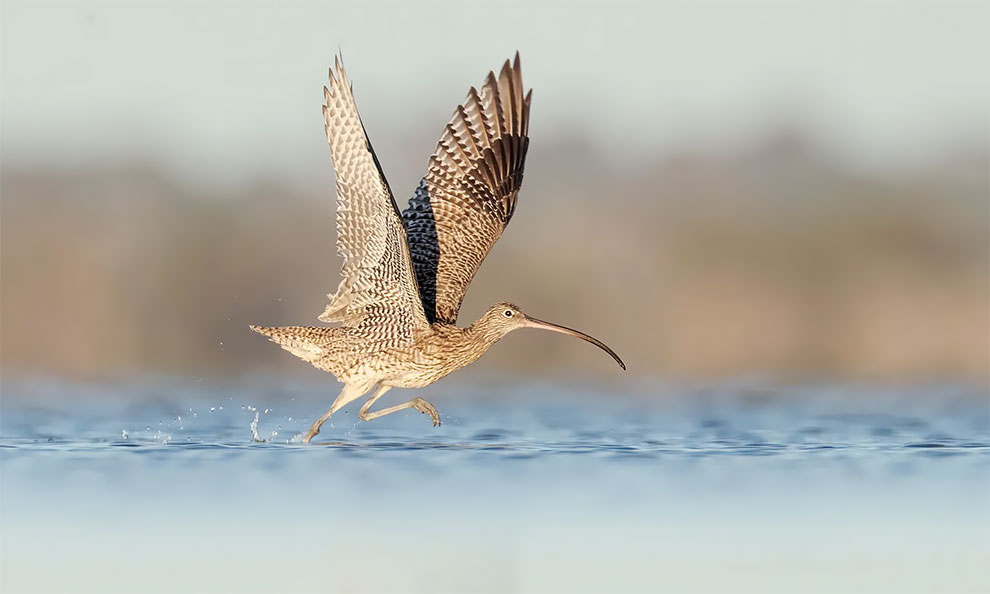 March: Eastern curlew. The world’s largest shorebirds, eastern curlews leave their breeding grounds in Russia and China each year to make an epic journey to the coasts of Australia, using the Earth’s magnetic field to navigate as they trace invisible flyways in the sky. Eastern curlews are found only in the east Asian-Australasian flyway. But the mudflats they depend on along their migration route are being destroyed ‒ and curlew numbers have declined by more than 80% in just over 30 years. Photograph: Shelley Pearson 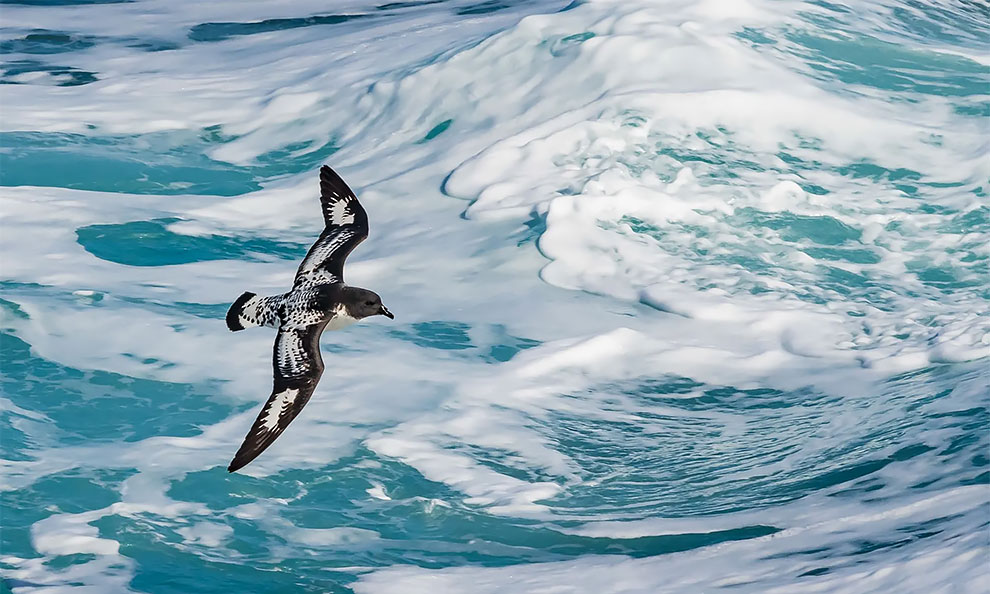 April: Cape petrel. The cape petrel is a regular visitor to southern Australian waters in the colder months, where they roam the seas in search of krill, fish and small squid. These unmistakeable black-and-white seabirds breed in colonies in Antarctica and on subantarctic islands, where they nest on cliffs or on flat ground. While nesting, they are notoriously aggressive, spraying a foul-smelling stomach oil, both as a defence against predators and an energy-rich food source for their chicks. Photograph: Larry Litke 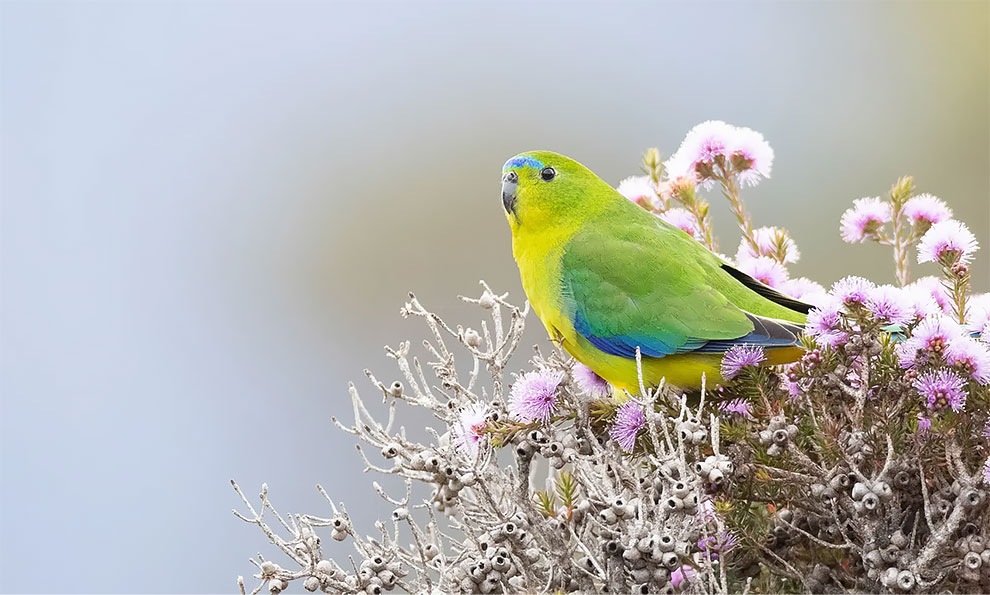 May: Orange-bellied parrot. The critically endangered orange-bellied parrot is one of the world’s rarest birds, and one of only a few migratory species of parrots. Every year, these small parrots breed in south-western Tasmania during summer before making the long journey across Bass Strait to spend the winter in coastal Victoria and South Australia. Five years ago, orange-bellied Parrots were teetering on the edge of extinction ‒ their numbers had plunged to just 17 birds ‒ but today, through careful management, their population is steadily increasing. Photograph: Matt Wright 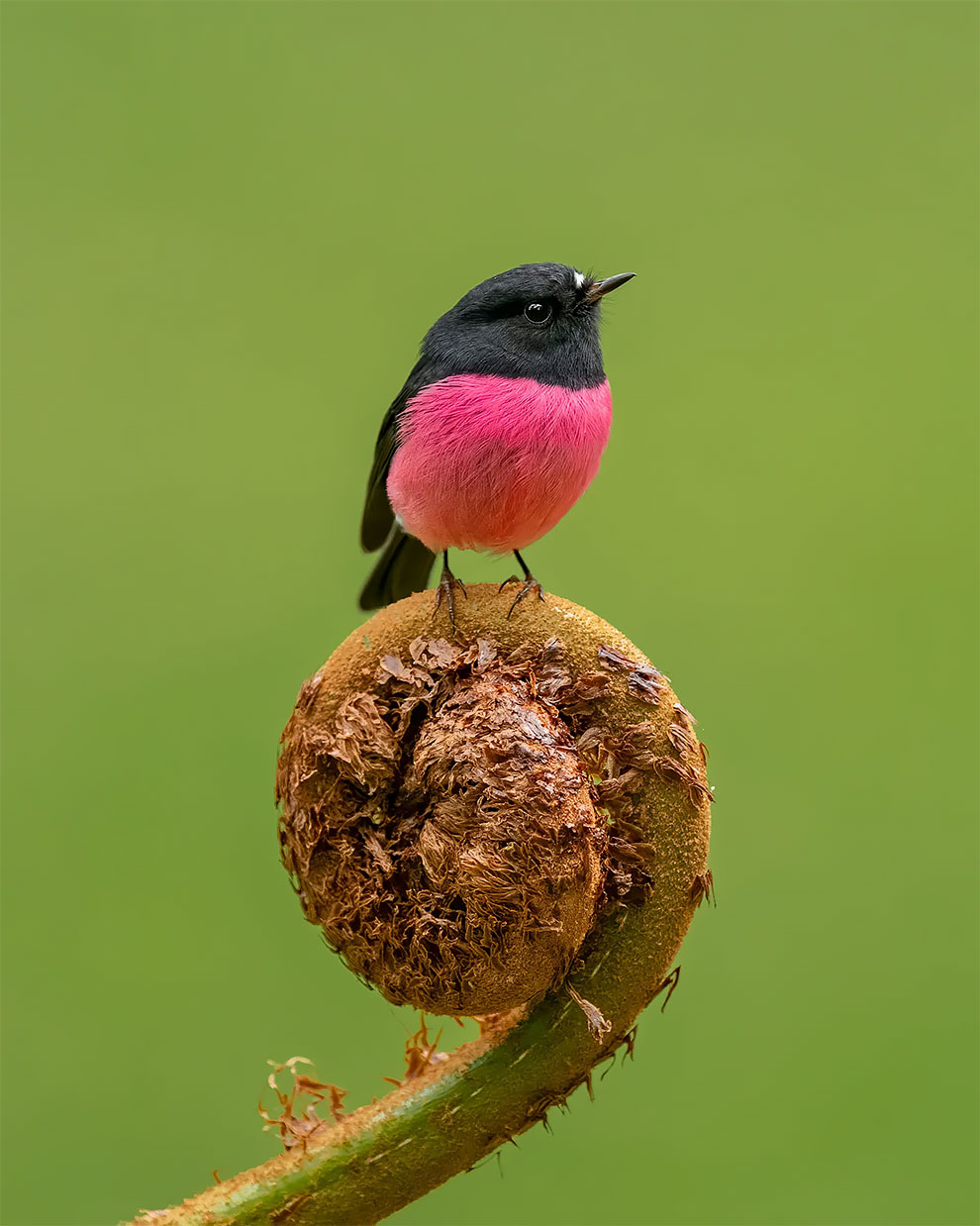 June: Pink robin. If on a still day you hear the tik, tik, tik of what sounds like a twig snapping, you might be eavesdropping on the quiet chatter of the picture-perfect pink robin. BirdLife Australia’s national bird monitoring program, Birdata, shows pink robins are regular winter visitors to the lowlands and foothills of south-eastern Australia, where they breed in dark, damp eucalypt gullies or cool temperate rainforests. In the winter, they often move into drier, more open habitats, including woodland. Photograph: Deepak Karra 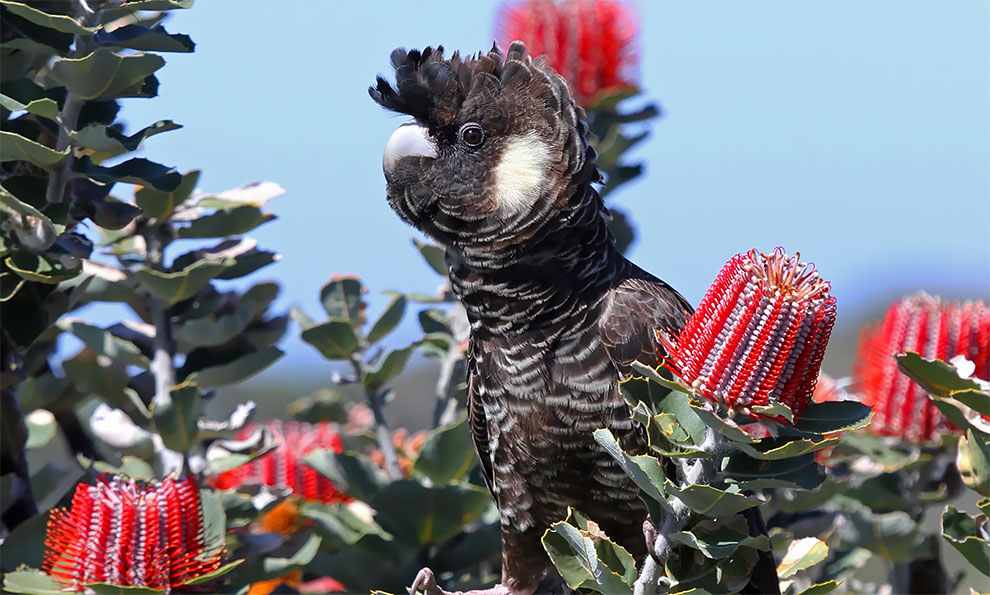 July: For Perth locals, Carnaby’s black-cockatoos wheeling across the city skyline is a familiar sight as they migrate to the Swan Coastal Plain from early summer. Photograph: Raeline Smith 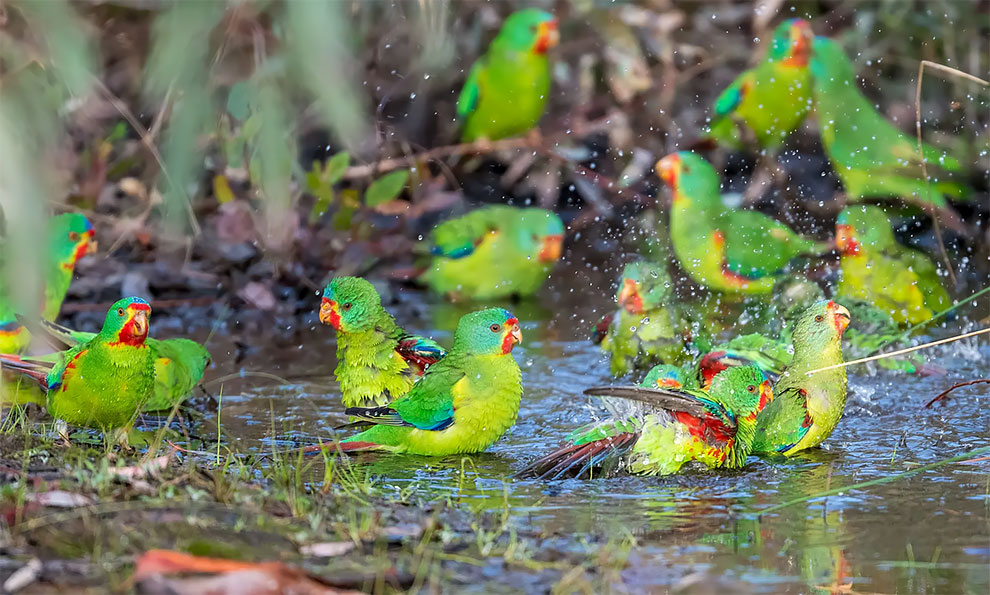 August: Swift parrot. The critically endangered swift parrot is one of only a few migratory parrots in Australia. Twice a year, these remarkable birds cross Bass Strait ‒ one of the world’s most treacherous bodies of water ‒ migrating from their Tasmanian breeding grounds to south-eastern Australia. On the mainland, swift parrots cover great distances in search of food. In Canberra and Melbourne, they’ve become frequent visitors to suburban parks and woodlands, and sometimes backyards. But urban areas pose many threats, including habitat loss, roads, windows, pollution and predation by cats. Photograph: Tony Clark 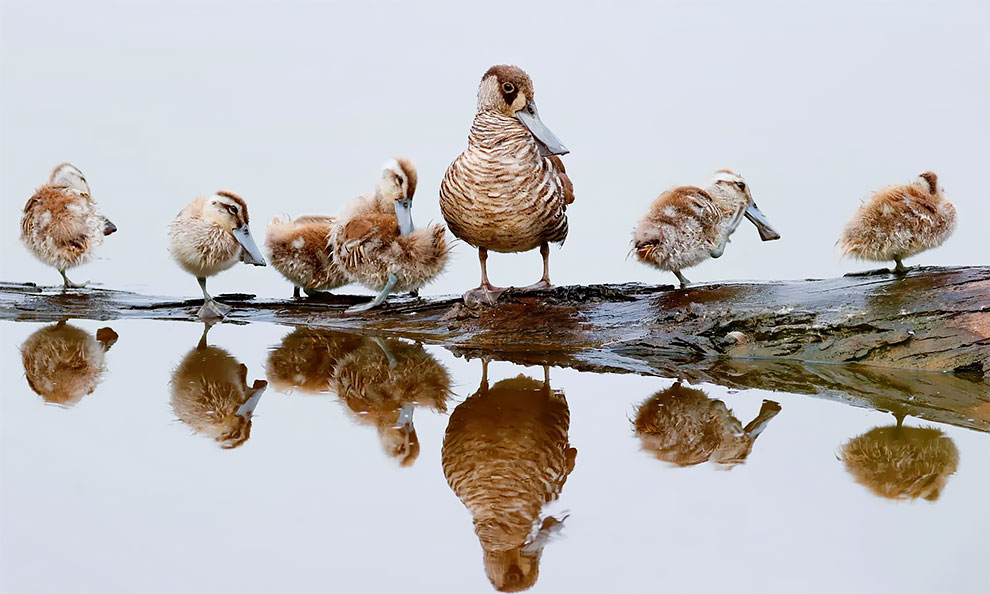 September: Pink-eared duck. Nicknamed zebra ducks, pink-eared ducks are easily recognised by their racing-stripe plumage. Their oddly-shaped bills allow them to suck water through the tip of their bill, then expel it through the grooves along the side, which filter out the tiny invertebrates they feed on.Like many inland waterbirds, Pink-eared Ducks are nomadic ‒ they go wherever there is food and water, moving irregularly in response to rainfall. Huge flocks sometimes congregate on large open wetlands, but they can appear anywhere there’s standing water. Photograph: Rob Solic 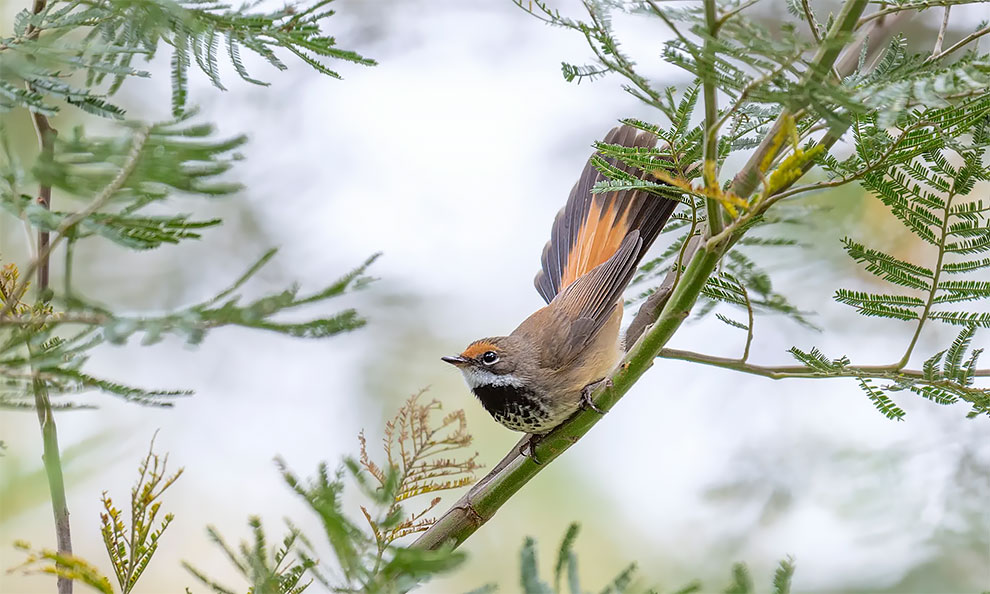 October: Rufous fantail. The aerial acrobatics of the rufous fantail are a sight to behold. Occurring mostly in rainforests and wet forests, these dainty birds feed in the air ‒ diving and twisting about in a blur of colour as they catch flying insects. These restless birds are constantly on the move and in the spring they migrate to south-eastern Australia to breed, before heading back north in the cooler months. While on migration, they can appear in unexpected places like urban parks and gardens. Photograph: Michael Fuhrer 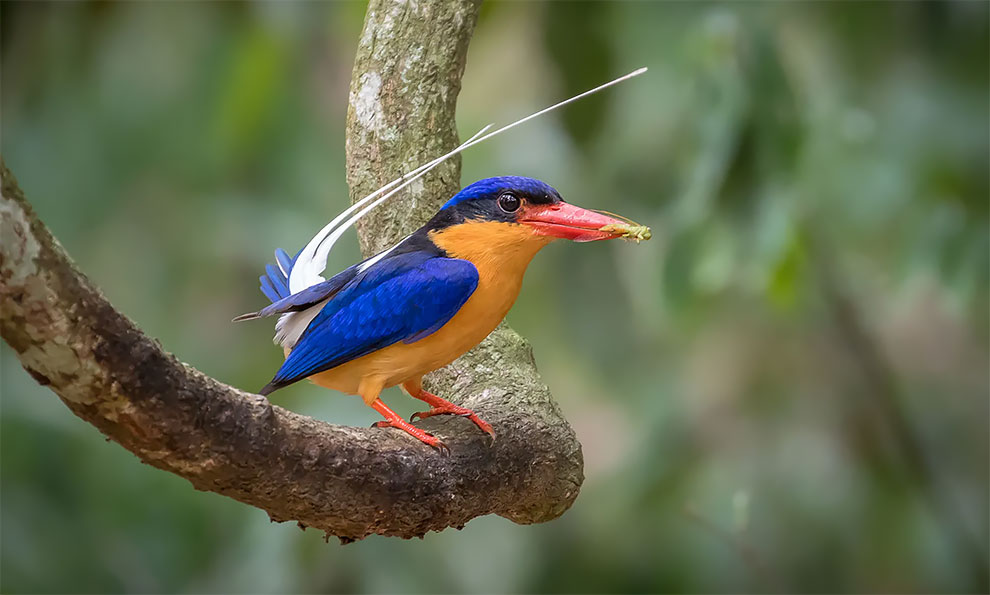 November: Buff-breasted paradise-kingfisher. In November, the spectacular buff-breasted paradise-kingfisher migrates from New Guinea to its breeding grounds in the wet tropics of north Queensland where they nest in termite mounds or rotting logs. Despite their brilliant plumage, they are shy and surprisingly difficult to spot ‒ listen for their loud piping ‘chop’ call, each note accompanied by a flick of their long tail streamers. Photograph: Linda Joseph 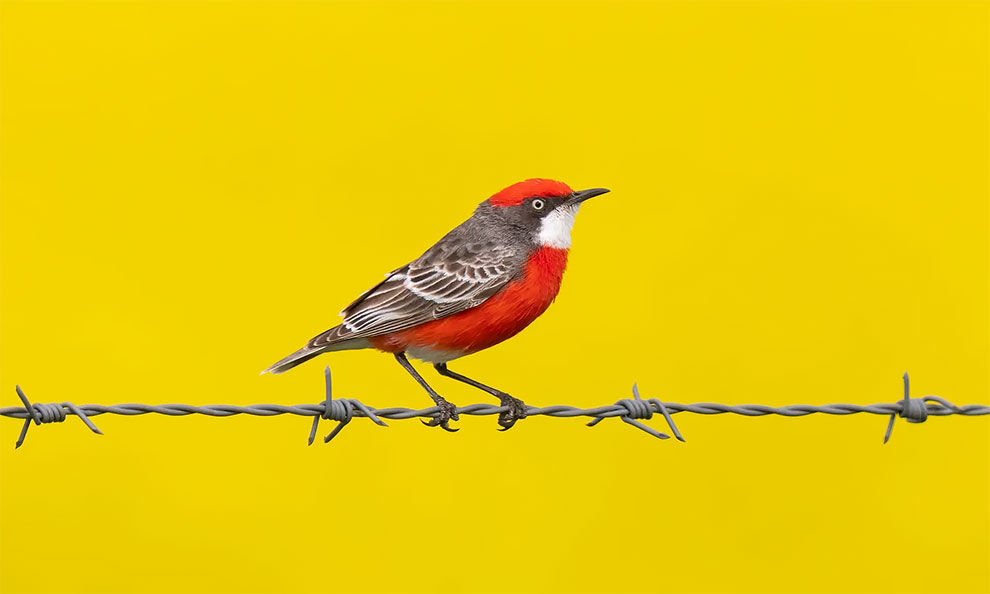 December: Crimson chat. In most years, crimson chats are winter visitors to northern Australia and summer visitors to the south. But when drought hits hard and the saltbush stops fruiting, resulting in fewer insects, crimson chats irrupt ‒ arriving in large flocks in places they’re seldom recorded ‒ in search of food and water. Down south, flashes of crimson among golden fields of canola may be a sight to behold, but it’s a worrying indicator of the severity of the drought they’re escaping. Photograph: Ambika Bone

Finalists Announced for 2021 Women in Sport Photo Action Awards
Elderly Couple Took the Same Photo Every Season but the Last One will Break Your Heart
Previous Generations Sure Knew a Thing or Two About Style
Winning Images from The 2020 Street Photography Competition By Independent Photographer
Stunning Photos Of Ecstatic Teenagers Screaming At Pop Concerts In The 1960s And 1970s
Unique Photographs of Russian Beauties in Old Costumes
Fascinating Vintage Photographs Documented A "Spirit Of Christmas" In The 1895–1930s
Beauty is in the Details
Neringa Rekasiute's "We. Women" Photo Project Places Women In the Throes Of A Major Fear — And Is An Ode To Raw Self-Love
The Red Lights Of Parisian Cafés: Dark And Gloomy Photos That Will Fill You With Trepedation
People of 'Porte St Denis' by Johan Berger
This Artist Takes Magnificent Pictures Of LED Hula Hoop Over The Beautiful Landscapes
Beautiful Pics Of Madonna Photographed In Alphabet City, NYC By Richard Corman In 1982
This Couple Did An ’80s Themed Photo Shoot For Their 10th Anniversary
Arnold Genthe’s Cats : Women Posing With ‘Buzzer’ From A Century Ago
“The East End In Colour”: Rare And Gorgeous Kodachrome Photographs Of London In The 1960s And 1970s
Fascinating Color Photos of Marilyn Monroe Singing to the Troops During the First Show of Her Four-Day Tour in Korea
Candid Photographs of The Rolling Stones Performing at the Alexandra Palace in London, 1964
Photo of the Day: Negotiations
Breathtaking Photos Of The Beauty Models Pose Perilously Close To The Edge Of New York's Buildings
The Breathtaking Geometry Of America From Above
Hong Kong’s 70s and 80s Nostalgic in Keith Macgregor's Photographs
Photographer Mark Rubenstein
Burnouts by Simon Davidson
australia, birds, calendar