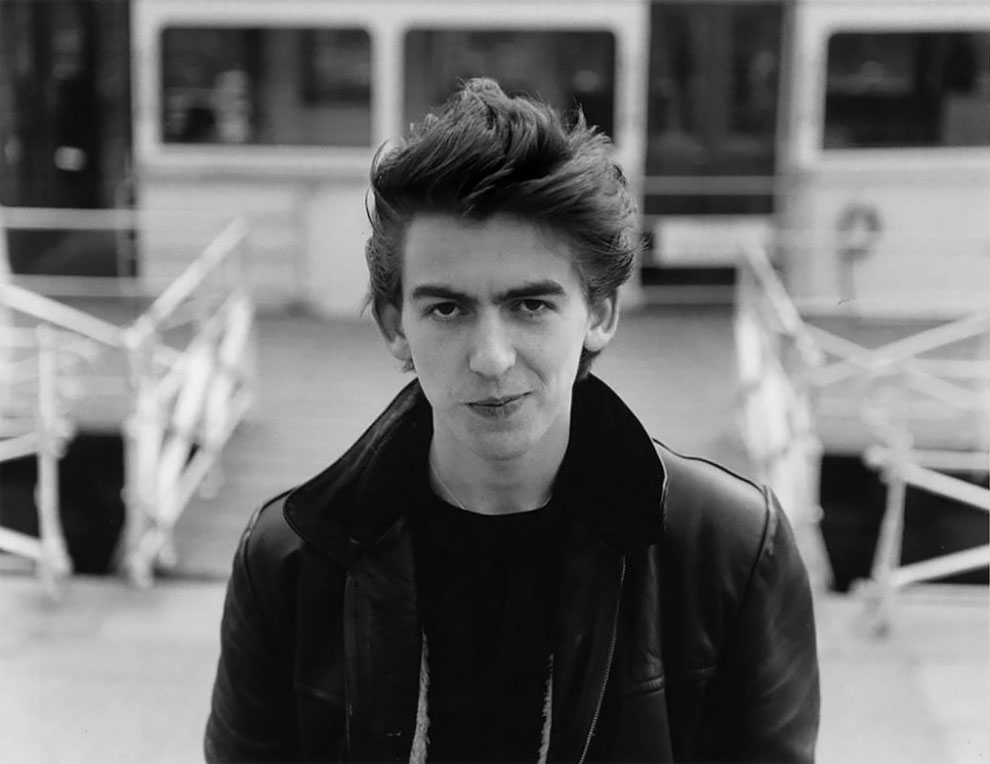 Jurgen Vollmer captured these images of George Harrison with wind-blown, slicked back hair during and after a ferry ride on Hamburg Lake in Spring 1961. By this time, The Beatles had adopted the brushed forward hairstyle worn by Vollmer, Astrid Kirchherr and Klaus Voormann. Vollmer recalled: “…occasionally George would comb his hair forward, but always combed it back again. He said the Rockers gave him funny looks.” 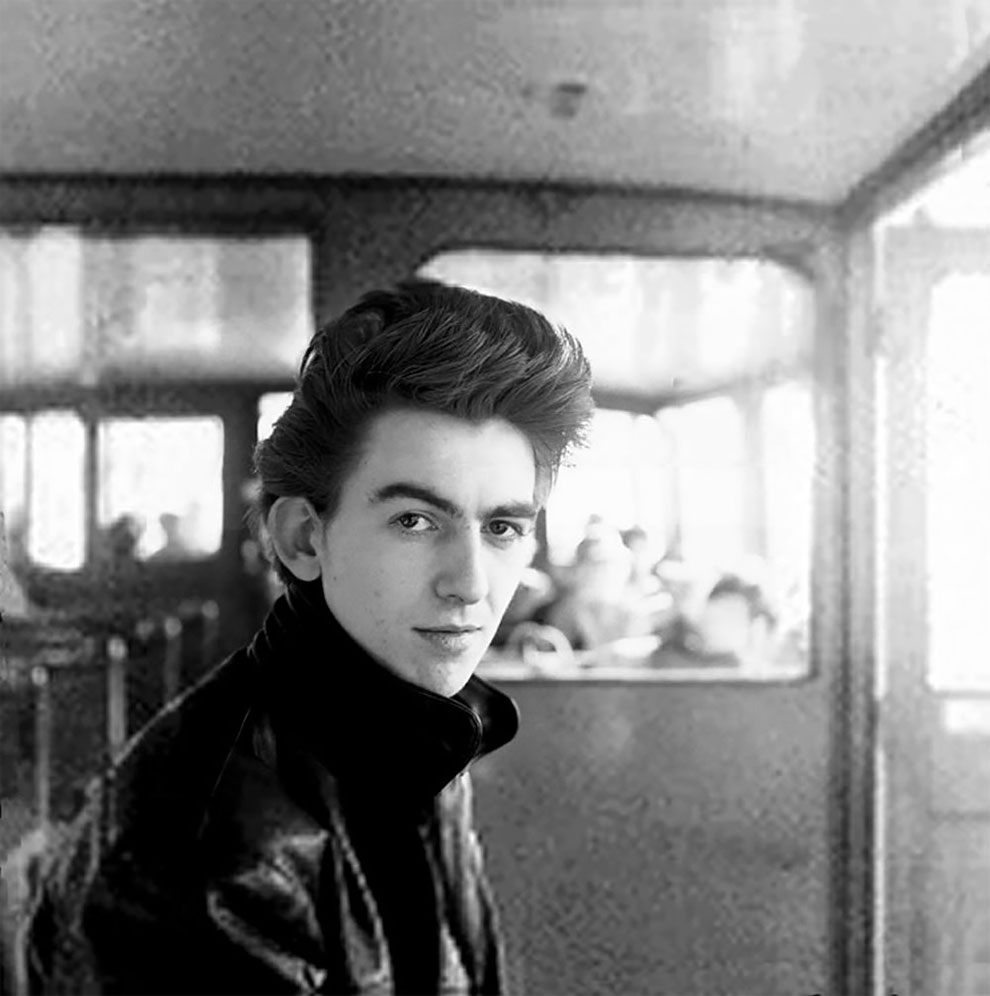 In 1960, Astrid Kirchherr took some superlative photos of The Beatles in Hamburg. She took none at all in 1961, scaling back her work to help out Reinhart Wolf. His other assistant Jurgen Vollmer made up for it. Early in this second visit he asked George to go out with him for a few hours for a solo session, and George agreed, slipping into his leather jacket and greasing back his quiff. The others showed their intrigue with nods and winks. They knew Jurgen had a crush on George; he sometimes wore an I LIKE IKE badge he’d altered to read I LIKE GEORGE. “It was chemical,” said Jurgen. “I liked George the most. He was very quiet and shy, like me, and also a dreamer.” 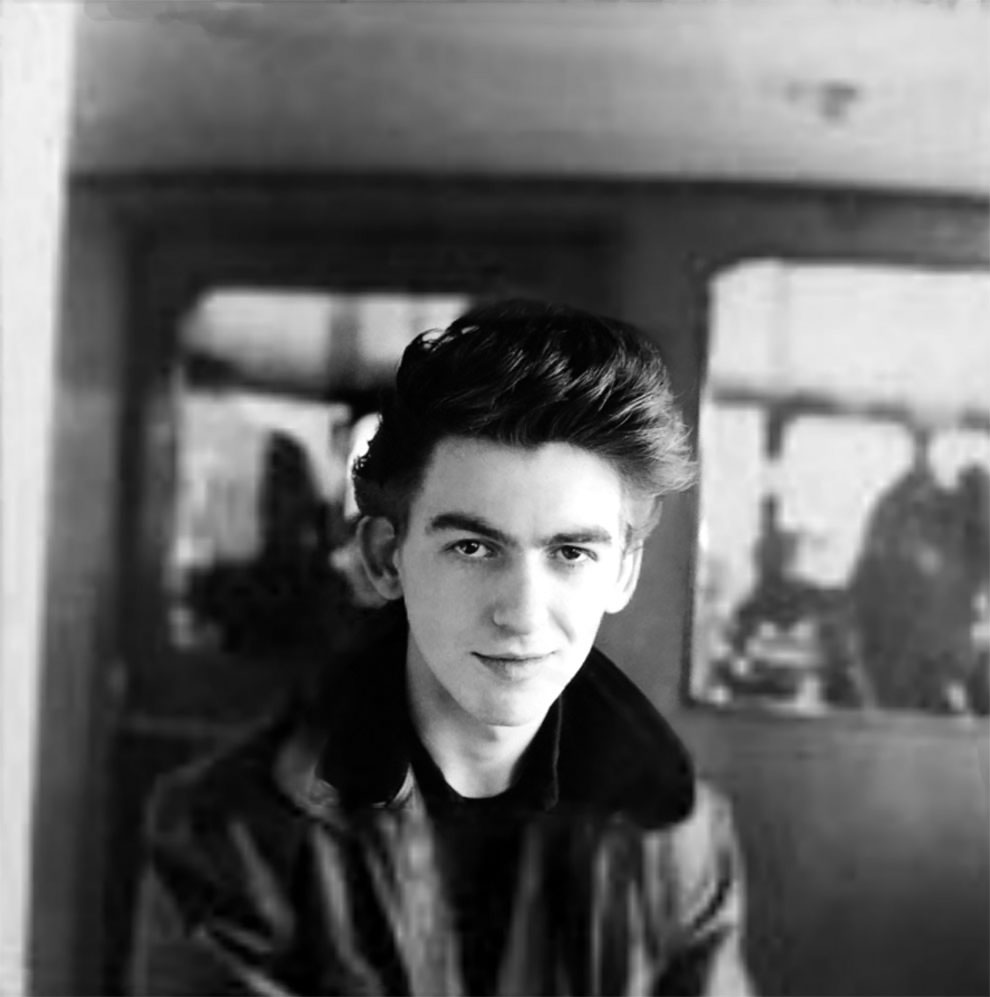 This was an experimental day, because Jurgen had never done a photo session before. He was using a Rolleicord camera borrowed from Wolf, probably the same one Astrid had used for her first shoot. The results were similarly excellent. He fired off a role of twelve black-and-white photos on the Alster ferry, and eight more frames on the landing stage at Winterhuder Faehrhaus, and George’s character and youth shine fresh from the spring images. 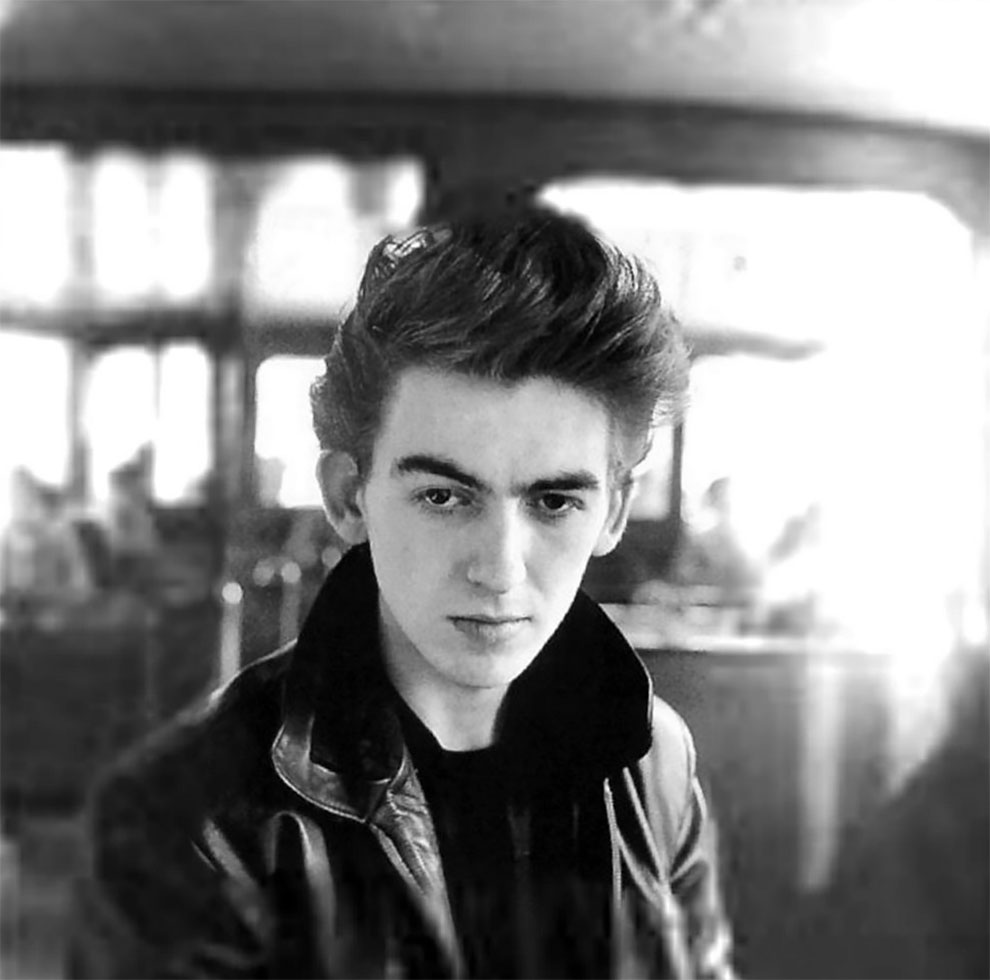 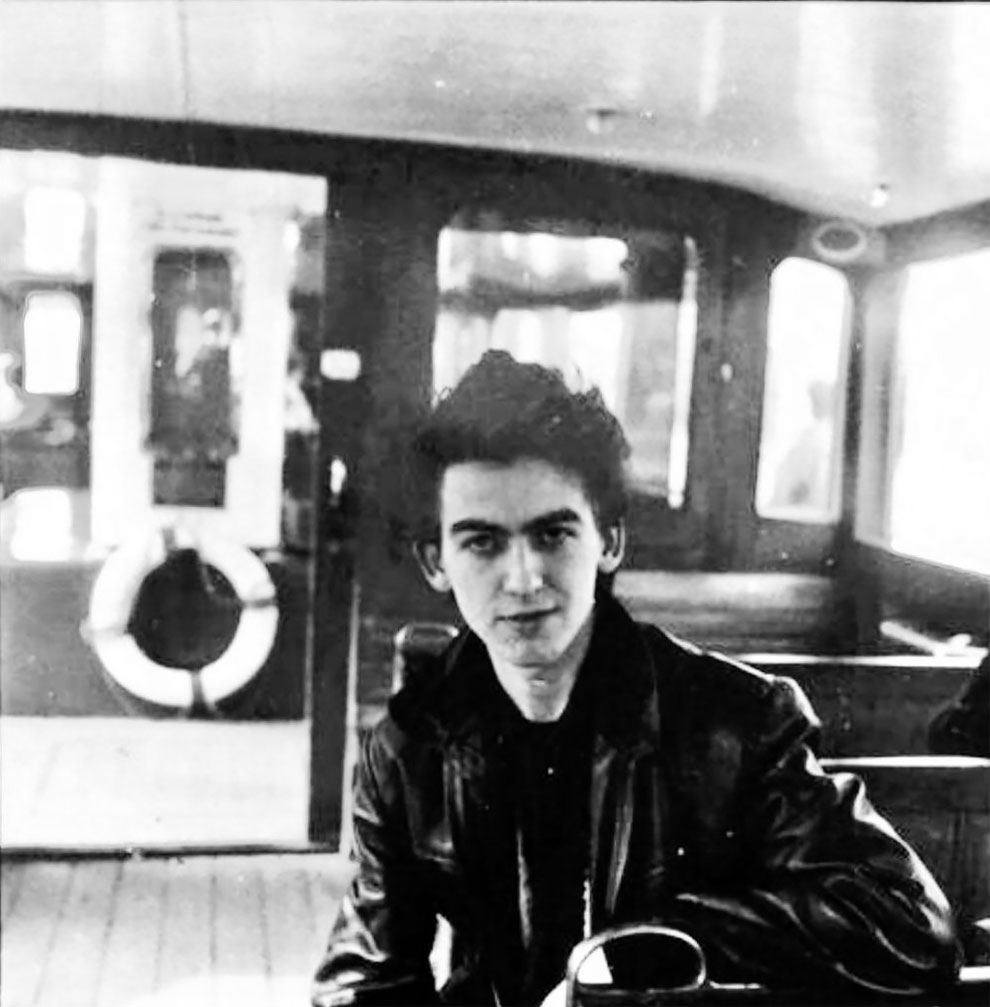 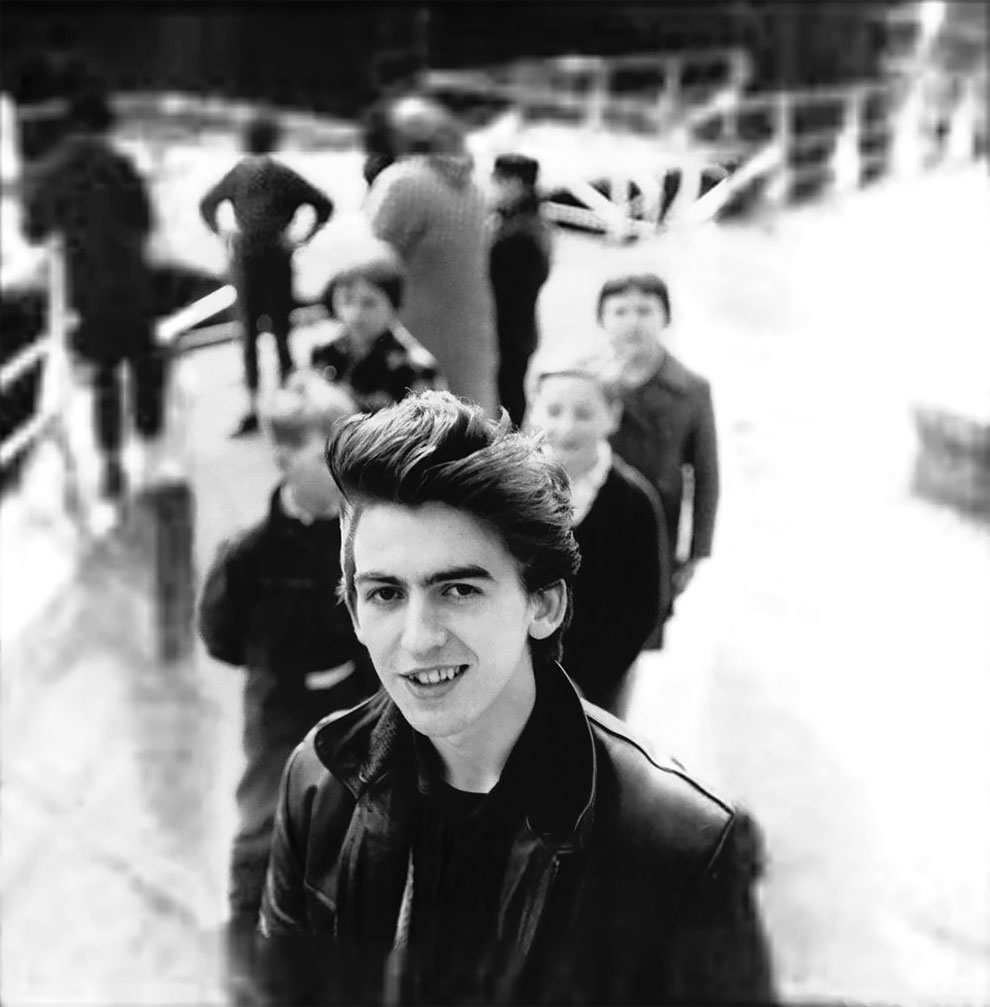 Liverpool In The 1980s: Photographer Dave Sinclair’s Stunning Images Show A City That Refused To Lie Down In The Face Of Adversity
Photographer Captures Beautiful Polish Folklore Costumes In A Painting-Like Style
Woodcarvers Create Christmas Masterpieces
Sujata Setia Photographed Kids With Incredible Hair
Meet Georgina Burke, The Plus-Size Model Who's Changing The Game
The Beautiful Winning Photos Of The Military Visual Awards For 2019
100 Homeless People Were Given Disposable Cameras And These Are Some Of The Amazing Results
Try Not To Gag At These Photos Of Vintage Eating Contests!
Architecture Photography By Salvador Cueva
Selection Of Amazing Photos From The National Geographic 2015 Photo Contest
Photographer Mirko Nahmijas Reveals The 'Star Wars' Architecture Of Soviet Belgrade
"MOTOBAIK" by Christian Rodriguez
Silhouettes Around the World
Katy Perry’s Stunning Looks in First Big Appearance since Filing for Divorce
2014 National Geographic Photo Contest, Week 8
Photo of the Day: "After"
Photographer From Slovakia Took Portraits Of Dogs And They Are Beautiful
The Associated Press: Best of 2014 from Latin America, Part 2
The Bedouin Skate Crew in Tunisia
Balloonists Take To The Skies To Launch The Bristol
Photographer Captures American Apparel Ads in their Gritty Natural Environment
Photographer Teemu Jarvinen Captures The Night Around Asia And The World
Anne Vyalitsyna for Numero #135
Fantastic Photos of the Earth from Above
Autumn Hits Germany
The Dead City Of Pripyat Now Has A Christmas Tree!
Serbian Photographer Brings Slavic Goddesses Vesna And Lada Back From Ancient History To Life
Sofia Vergara for Vanity Fair Italy, July 2012
Pizza In The Wild: A Surreal Photo Project By Jonpaul Douglass
Inside Ciccolella, Italy's Leading Producer of Cut Flowers
1960s, beatles, George Harrison, germany, Jurgen Vollmer, music, retro