“(Revelations 13:15-18) “This calls for wisdom: let the one who has understanding calculate the number of the beast, for it is the number of a man, and his number is 666. I was left alone, my mind was blank I needed time to think. To get the memories from my mind. What did I see? Can I believe it?. That what I saw that night was real and not just fantasy?”, said Bruce Dickinson.” 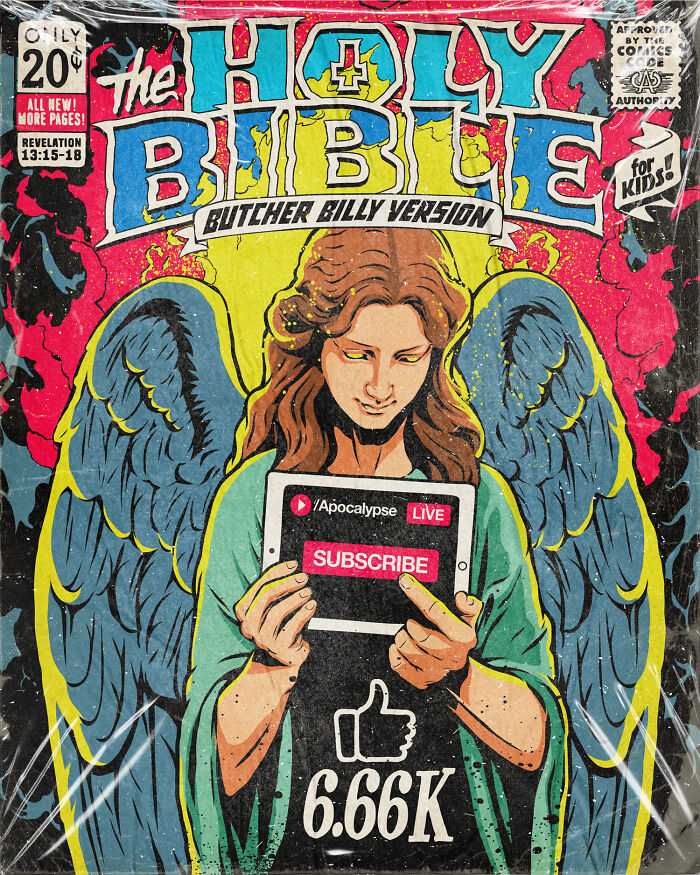 The Brazilian illustrator Butcher Billy likes to keep things simple. Initially he sketches out his ideas on napkins from sleazy bars, then moves over to his Mac to create a clean, clear image. He uses basic colours and strong forms – and a few graphic tricks here and there – for impact. Though he creates his work digitally, he’s absorbed by the typography, imagery and creative concepts of the 70s, 80s and 90s and loves the little imperfections of the pre-web era. He draws on nostalgia throughout his work.

According to an artist: “Pop culture has always been filled with Bible references. It was the inspiration for painters, sculptors and pretty much every artist for hundreds of years.

Almost every modern hero you see today will show a Jesus complex in one way or the other. Also, of course, the Devil turned out to be one of the greatest characters in all fiction. Zombies? Forget Romero. I say Zechariah or John came up with that concept.

This collection is an exercise of reverse-engineering the trend by re-injecting pop culture back into the Bible verses. After all, it’s safe to say that no modern scary story comes even close to being as horrifying as anything that happened to Job in the hands of God and the Devil. Not to mention what happened to Lot in the hands of his daughters when they were in the caves. GROSS.” 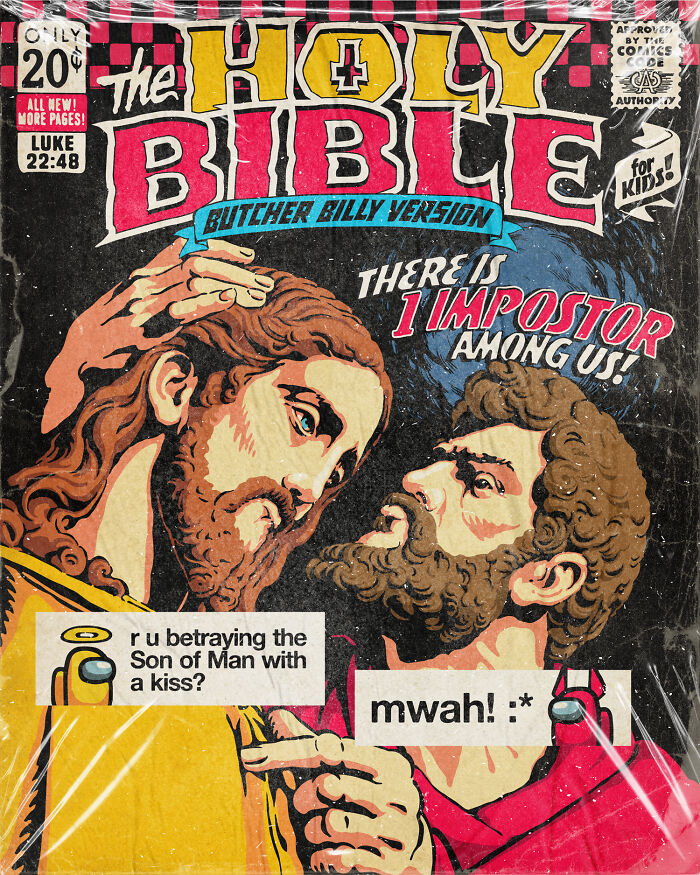 “(Luke 22:48) And while He was still speaking, behold, a multitude; and he who was called Judas, one of the twelve, went before them and drew near to Jesus to kiss Him. But Jesus said to him, “Judas, are you betraying the Son of Man with a kiss?” Surely there was an impostor among us. “Available on PS4, Android, Microsoft Windows, Xbox One, iOS, Xbox Series X and Series S, Nintendo Switch, PS5″, Judas answered.” 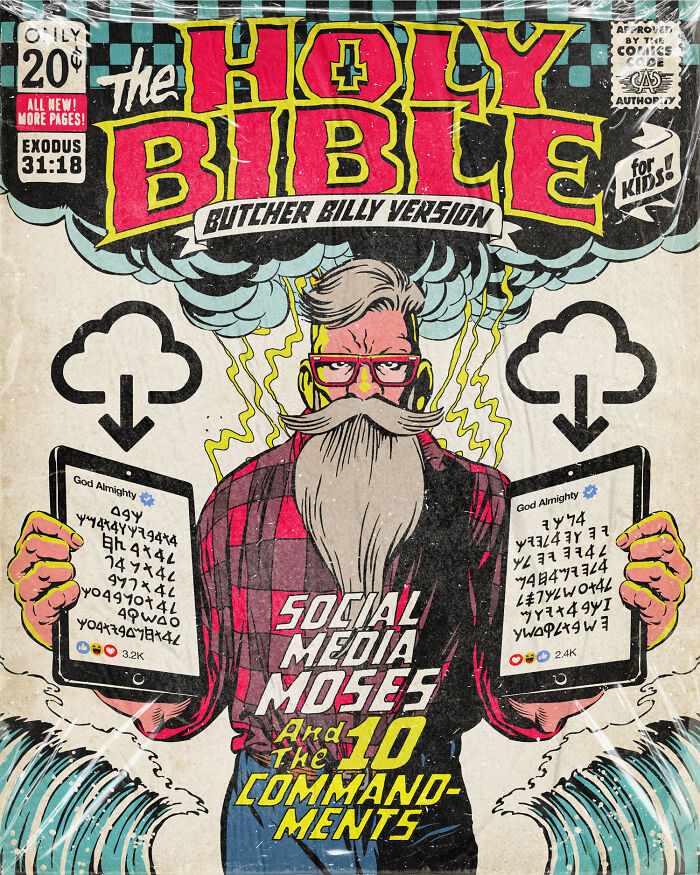 “(Exodus 31:18) When the Lord finished emailing Moses on Mount Sinai, he gave him the two tablets of the covenant law, the iPads inscribed by the finger of Steve Jobs. So by the divine powers of the 5G, Moses used the tablets to download some data from the cloud. It was Moses’ divine mission to make the messages go viral on social media.” 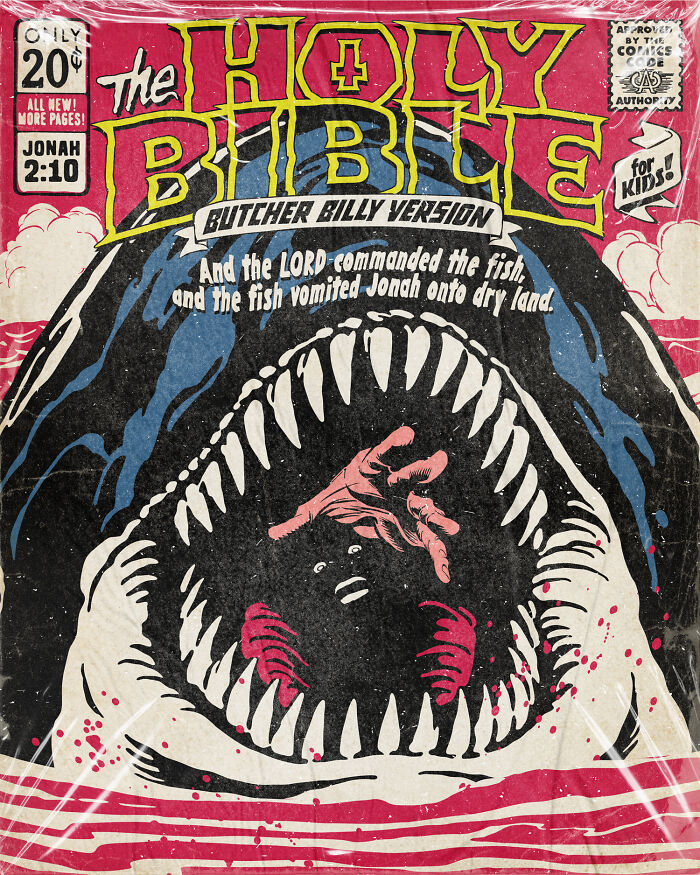 “(Jonah 2:10) And the Lord commanded the fish, and it vomited Jonah onto dry land. “We’re gonna need a bigger boat”, said Jonah.” 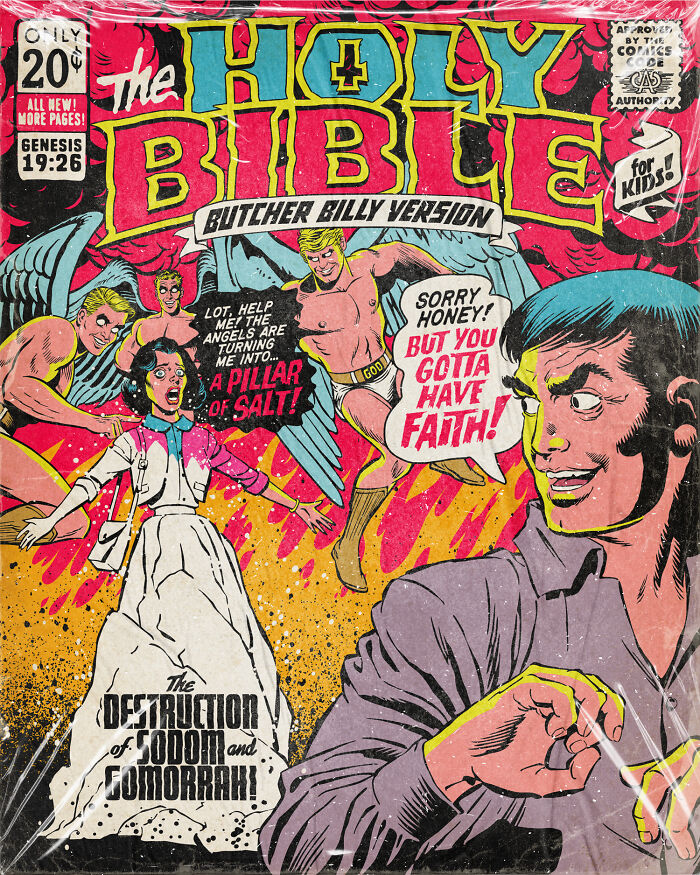 “(Genesis 19:26) Then the Lord rained on Sodom and Gomorrah sulfur and fire from the Lord out of heaven. But Lot’s wife, behind him, looked back, and she became a pillar of salt. Why a pillar of salt? God knows, literally. Then Lot happily accepted the Lord’s punishment on his wife by singing an old song by George Michael, and didn’t look back. Then Lot and his daughters went to live inside a cave, where even more truly horrible things happened afterwards.” 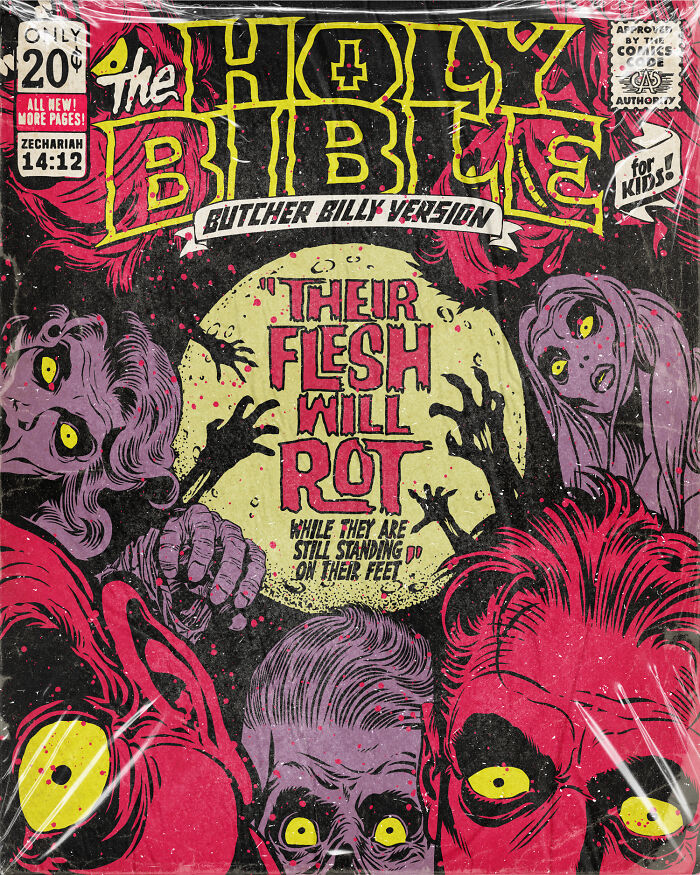 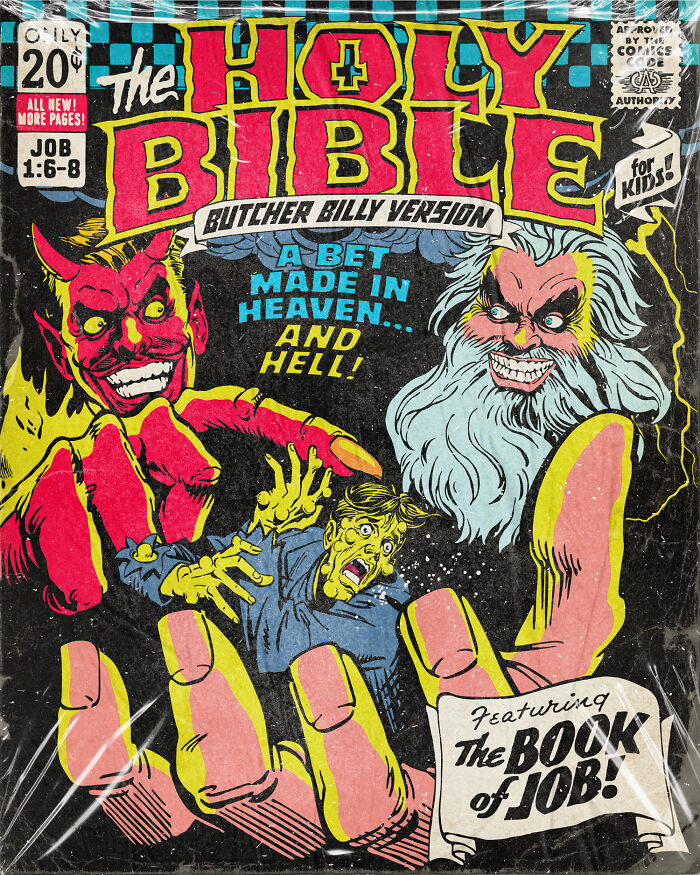 “(Job 1:6-8) The Lord was bored, so he decided to have some fun. Then the Lord said to Satan, “Have you considered my servant Job? There is no one on earth like him; he is blameless and upright, a man who fears God and shuns evil.” So the Lord placed a bet with the Devil over his lab rat. Together they would torture Job and have his whole life completely destroyed in order to test his faith. God and the Devil shook hands, and in that beautiful moment, an ABBA song started playing. “The winner takes it all. The loser has to fall. It’s simple and it’s plain. Why should I complain?”” 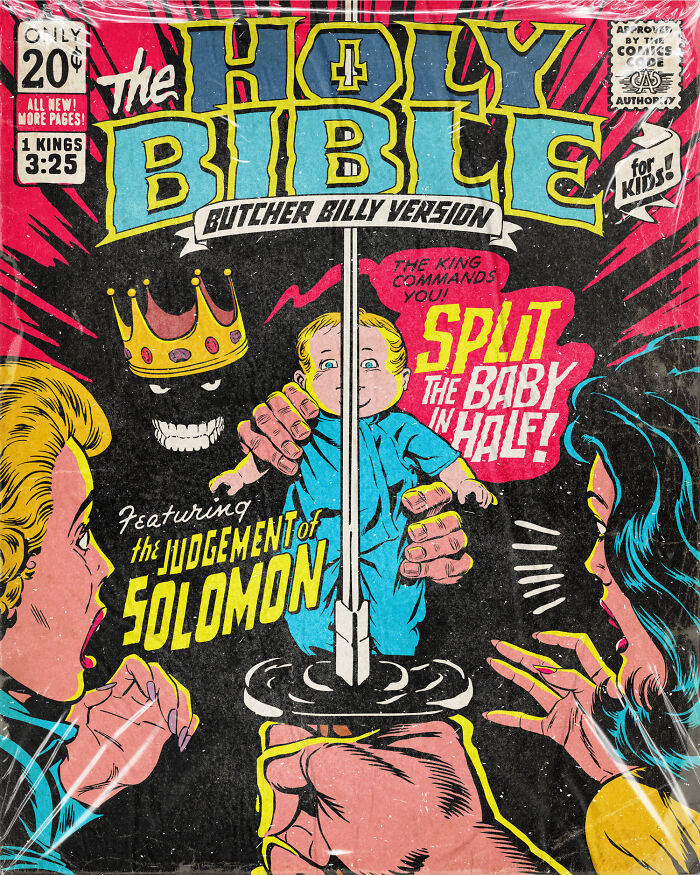 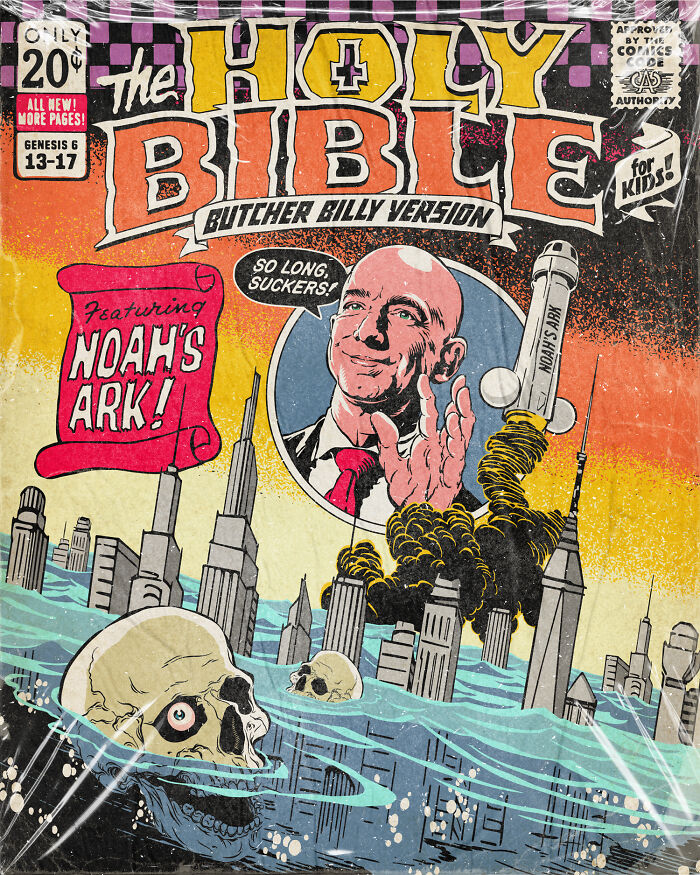 “(Genesis 6:13-17) “For behold, I will bring a flood of waters upon the earth to destroy all flesh in which is the breath of life under heaven. Everything that is on the earth shall die. Make yourself an ark and fill it with all the billionaires in the world”, said the Lord to Noah.” 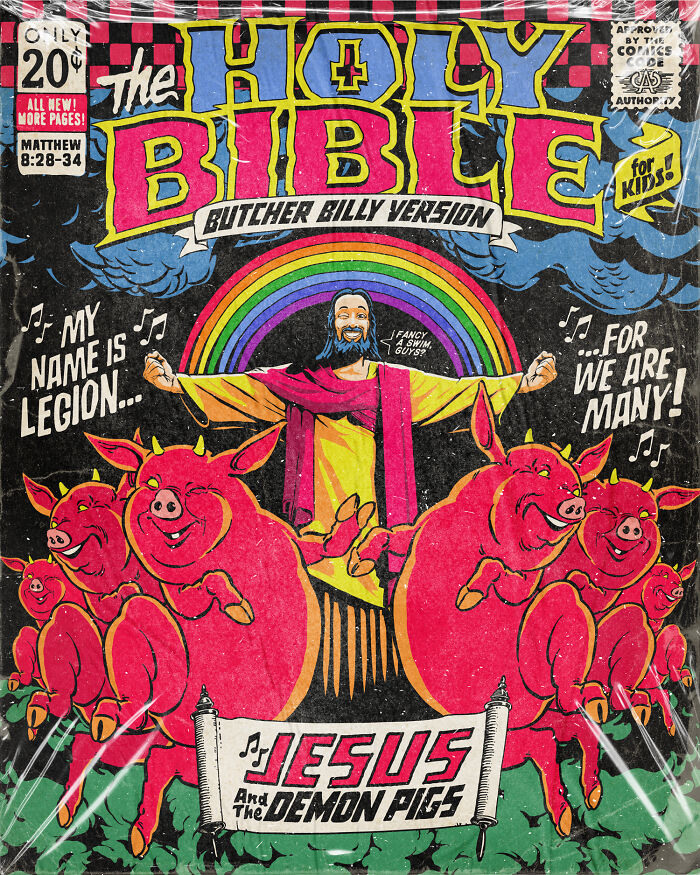 “(Matthew 8:28-34) Jesus was taking a leisurely stroll through a demon-infested tomb when two violent heretics began flailing about in front of him. They sarcastically asked if the “Son of God” had come to torture them for being possessed. Before Jesus could answer, a herd of pigs came thundering over a nearby hill. For some reason, the demons possessing the men pleaded to be allowed to enter the pigs. Jesus permitted this, and soon after, the classic rock band “Jesus and the Demon Pigs” was officially formed, and people from the local town were shocked, telling Jesus to leave their land immediately. Then the band left and started touring around the world.” 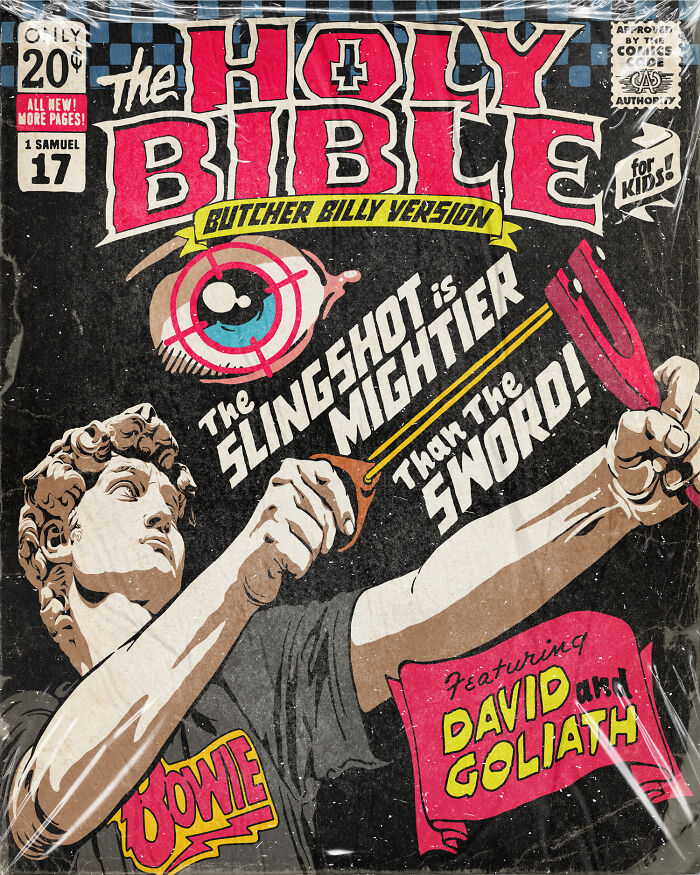 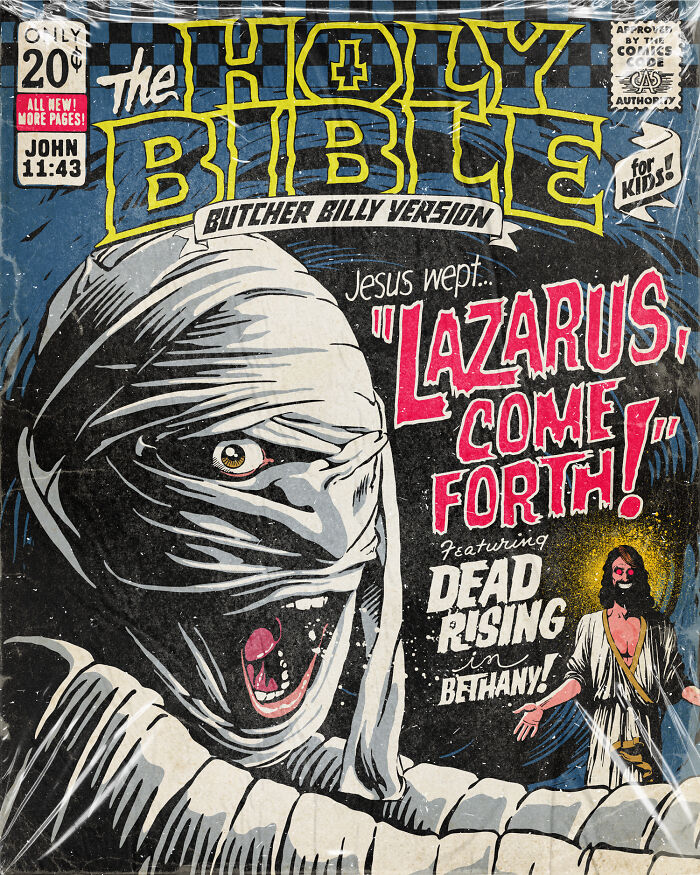 “(John 11:43) When Jesus had said these things, he cried out with a loud voice, “Lazarus, come out.” The man who had died opened his eyes and horribly rose from his tomb. At that moment, he felt the hunger for living brains. Jesus said to them, “Unbind him and let him go. Let the zombie apocalypse begin!”” 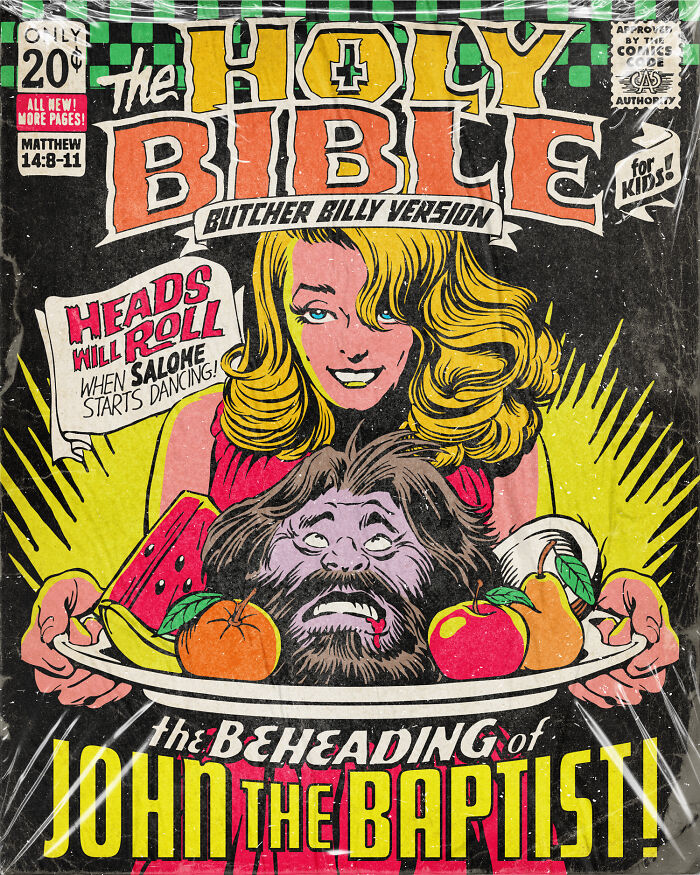 “(Matthew 14:8-11) On Herod’s birthday, the daughter of Herodias danced for the guests and pleased Herod so much that he promised with an oath to give her whatever she asked. Prompted by the song ‘Heads Will Roll’, by the Yeah Yeah Yeahs, she said, “Give me here on a platter the head of John the Baptist.” The king was distressed, but because of his oath, he ordered that her request be granted. John The Baptist’s head was brought in on a platter and given to Salome. “Dance till you’re dead”, said the song.” 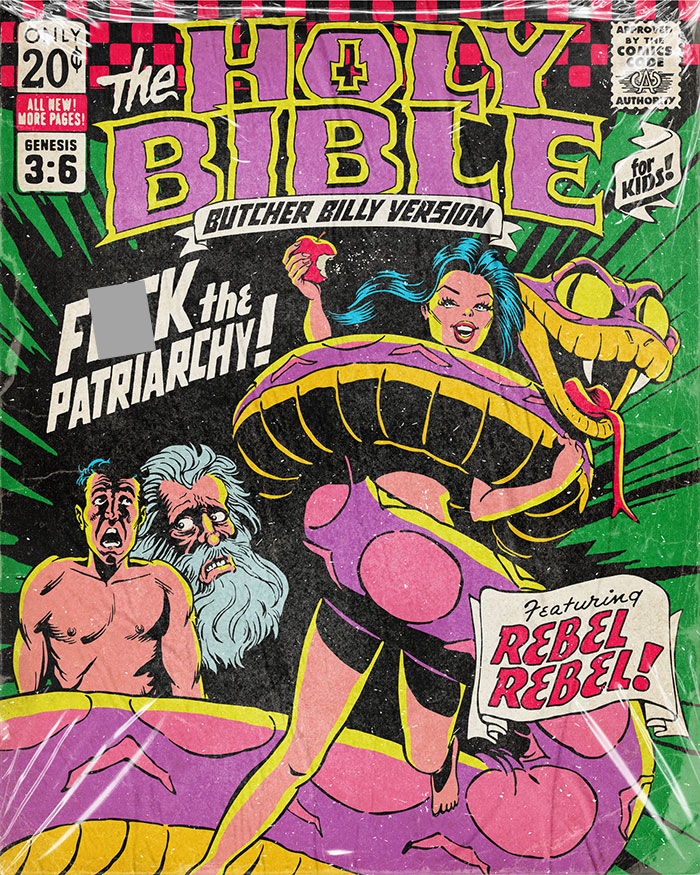 “(Genesis 3:6) Then the serpent said to the woman, “In the day you eat of it your eyes will be opened, and you will see the truth.” So when the woman saw that the tree was good for food, that it was pleasant to the eyes, and a tree desirable to make one wise, she took of its fruit and ate. Then the woman’s eyes were opened, and she knew, from that day on, that she had to take down the patriarchy. She was a rebel. So she rebelled.” 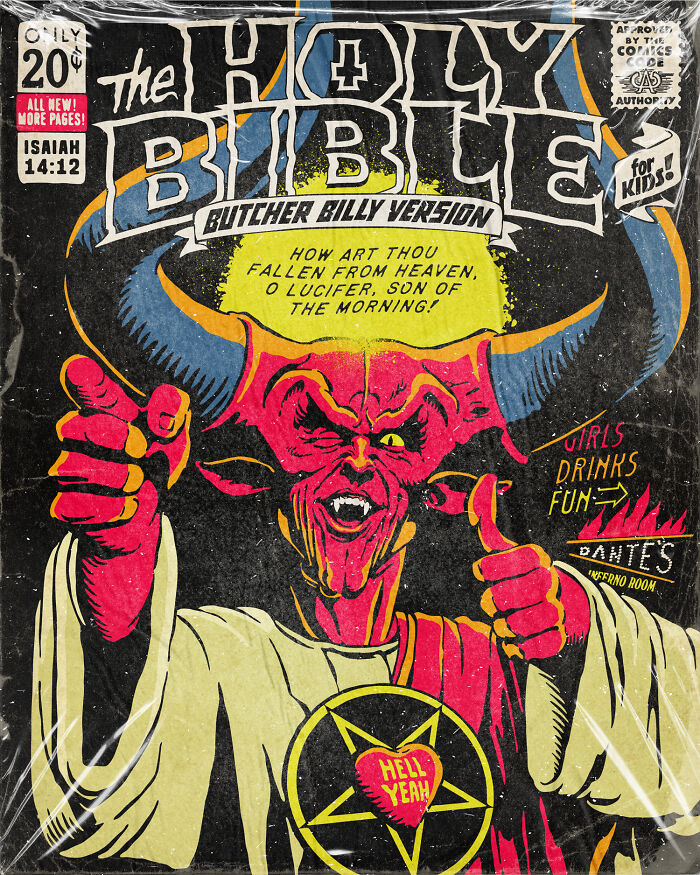 “(Isaiah 14:12) “How art thou fallen from heaven, O Lucifer, son of the morning! How you are cut down to the ground, you who laid the nations low! The devil will find work for idle hands to do. I stole and I lied, and why? Because you asked me to!”” 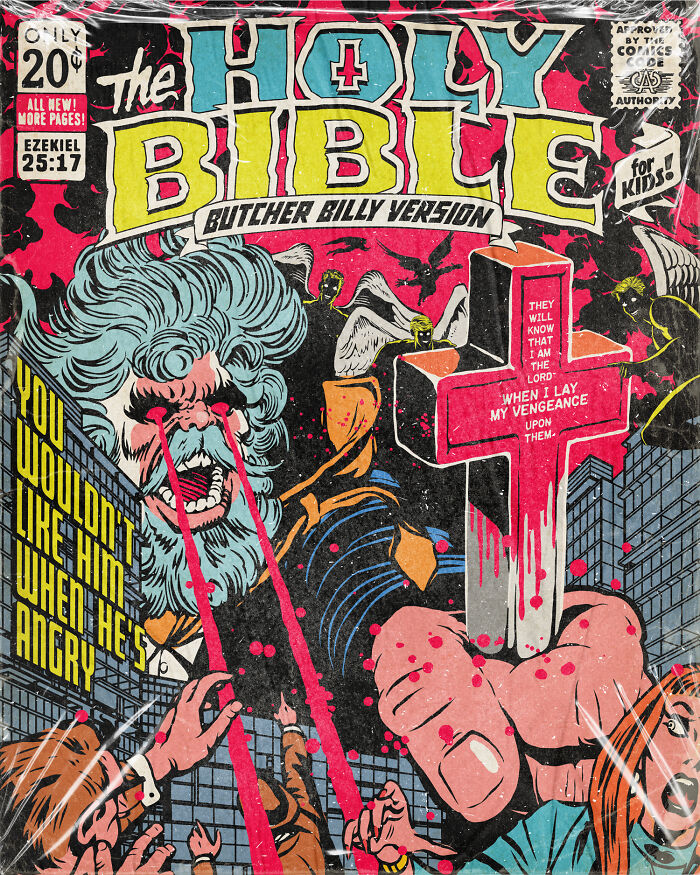 “(Ezekiel 25:17) “The path of the righteous man is beset on all sides by the inequities of the selfish and the tyranny of evil men. Blessed is he, who in the name of charity and goodwill, shepherds the weak through the valley of darkness, for he is truly his brother’s keeper and the finder of lost children. And I will strike down upon thee with great vengeance and furious anger those who would attempt to poison and destroy my brothers. And you will know my name is the Lord when I lay my vengeance upon thee.”, said Jules Winnfield.” 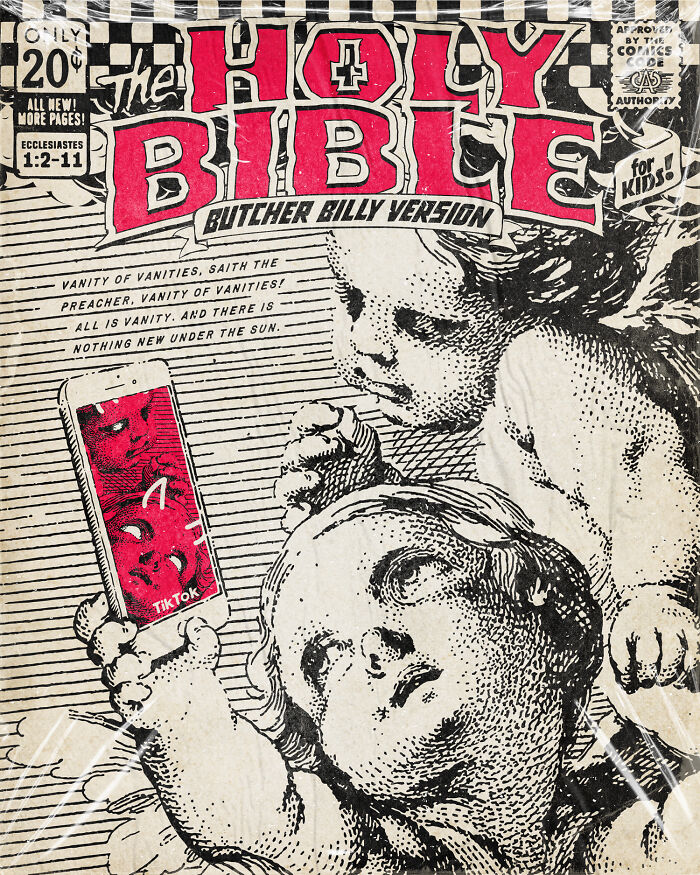 “(Ecclesiastes 1:2-11) “Vanity of vanities, vanity of vanities! All is vanity. And there is nothing new under the sun until the next social app comes out to dethrone TikTok”, saith the Preacher.” 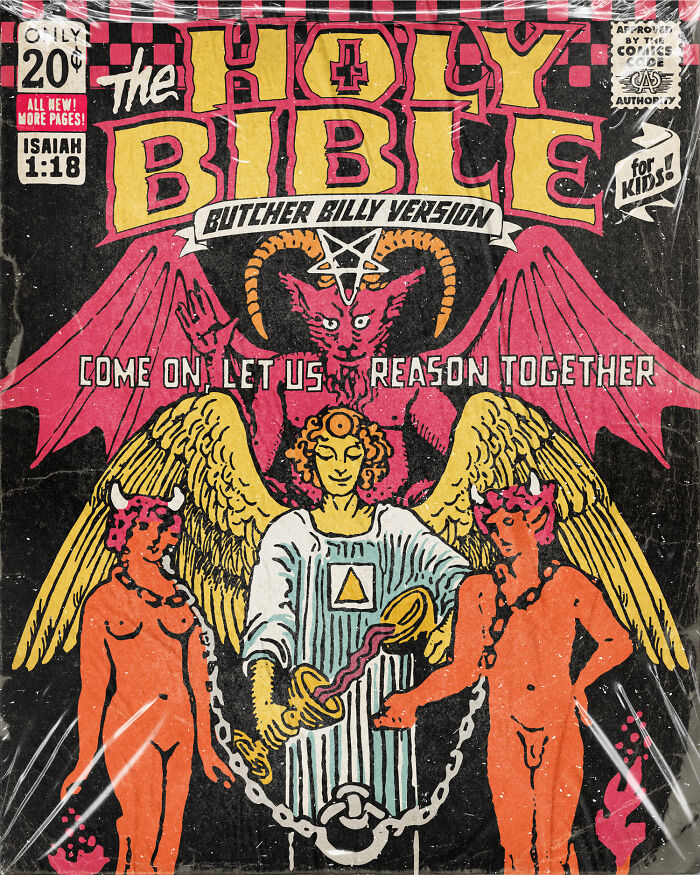 Cartoon Robocop and Gremlins: Superb Caricatures by Lyle Cruse
Vintage Photos Show What Teens Wore in the 1970s
"Liquid Colors": The Superb Colorful and Surreal Collages by Farid Sukuro
Twins Show What Pop Culture Characters Would Dress Like In Real Life
"Forest Of Insomnia": Surreal And Dreamlike Photo Manipulations Of Louis Kellner
This Artist Creates Lovely Illustrations That Might Brighten Your Day
"Secretary Wanted.... Must be Flexible"
Amazing Face Paintings By Jordan Hanz
This Artist Created Very Cute Covers Of The Music World, Replacing Singers With Cats
Photographer Creates Mind-bending Mashups To Mess With Your Head
Guy Hilariously Photoshops Himself Into Awkward Stock Photos, Again
Vintage Posters for the Early "Tom and Jerry" Cartoons in the 1940s
Eccentric Vintage Car Ads From the 1960s and 1970s
Spectacular Vintage Photographs Of America’s Western Frontier By Timothy O’Sullivan
Illustrator Joey Yu Shows You How To De-Stress And Relax, According To Your Zodiac Sign
Artist Creates Contemporary & Surreal Collages Mixing Aesthetic References
A Collection Of Images Where Bicyclists Float Along City Streets With Invisible Bikes
Some Guy Is Leaving Hilarious Fake Trivia Books In Bookstores
Art Object Dedicated To The Fire Problem In Siberia
Fabulous Cover Photos of La Vie Parisienne in 1927
Dave Burke's Superb Acid Art
A Girl Who Is Deaf In One Ear Gets A Tattoo To Inform Strangers
The World’s Greatest Gallery Of Seductive Carrots
The Incredible Painted Western Australia Grain Silos
Bible, Butcher Billy, humor, kids, vintage

This Artist Draws People’s Emotions That Can’t Be Expressed By Words
Horrifyingly Detailed NSFW Images Of Surgical Procedures From The Early 1800s
WikiLeaks
Global Brands Redesigned as If They Were from The USSR
"In Case Of Emergency": Humorous Digital Artworks By Ben Fearnley
Artist Made These Fantasy Themed Illustrations During The Pandemic To Keep Some Optimism And Colorfulness In The Grim Reality
In Love To Nature And The Sea, This Artist Upcycles Old Surfboards And Create Art On Them
Someone Created Words To Describe Weird Things And Situations
Artist Uses Right Hand to Turn Her Left hand Into Optical Illusions
Woumpah
2007 ‒ 2022 by Design You Trust. Proudly hosted by WebHostingBuzz.
Privacy Policy · Terms of Service · Content Removal Policy ❤️ 🇺🇦