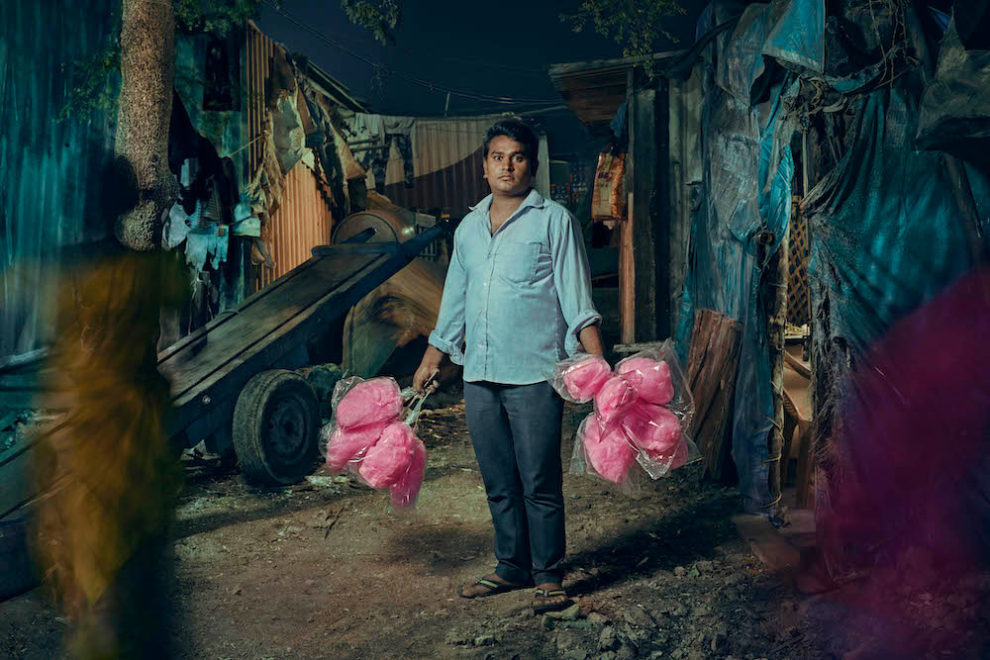 Photographer Jon Enoch has released a set of portraits featuring candy floss sellers in the Indian city of Mumbai.

Never more popular than in the age of social media for some eye-catching likes, the pink sugar clouds are popular for those looking for an affordable treat as the country emerges from a gruelling series of Covid lockdowns and restrictions. 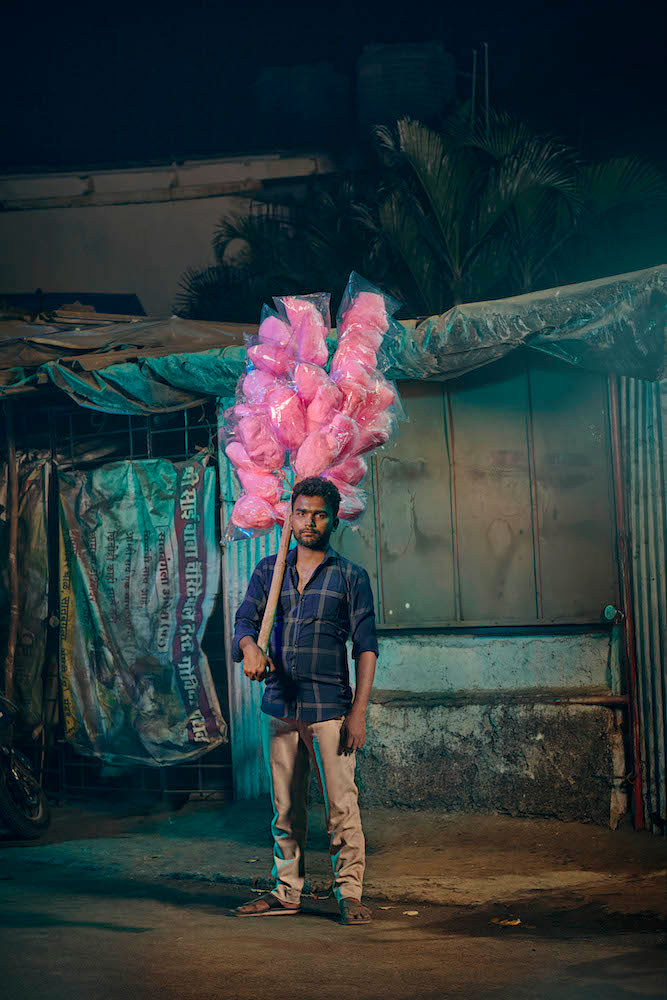 Enoch’s series shows the sellers – the men who live and work in the western sprawl of Mumbai near the cotton candy selling grounds of the beaches and fairs and their unique and varied ways of displaying their goods and attracting a buyer.

Mumbai is India’s most populous city, home to Bollywood stars and the country’s financial centre. India’s recent economic expansion is unsurprisingly being stalked by a growing obesity and dental crisis. Lassi, fresh juices and home-cooked foods are being replaced with an explosion of cheap sugar. 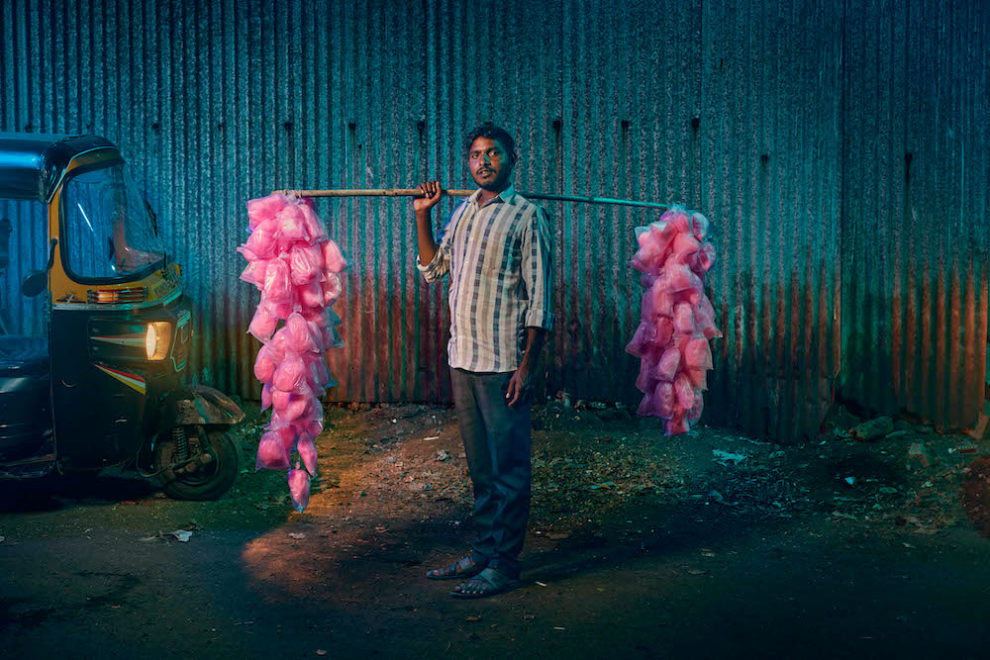 Candy floss and brightly coloured Indian sweets have been found to sometimes use banned artificial food colouring, specifically Rhodamine B, which is a staining fluorescent dye, banned because it’s potentially carcinogenic and unfit for human consumption.

Enoch stated: “When I read that the desire to create the perfect eye-catching bright pink candy floss often leads to unauthorised colouring agents being added to the mix, I thought it’s the perfect metaphor for the ills of our time. 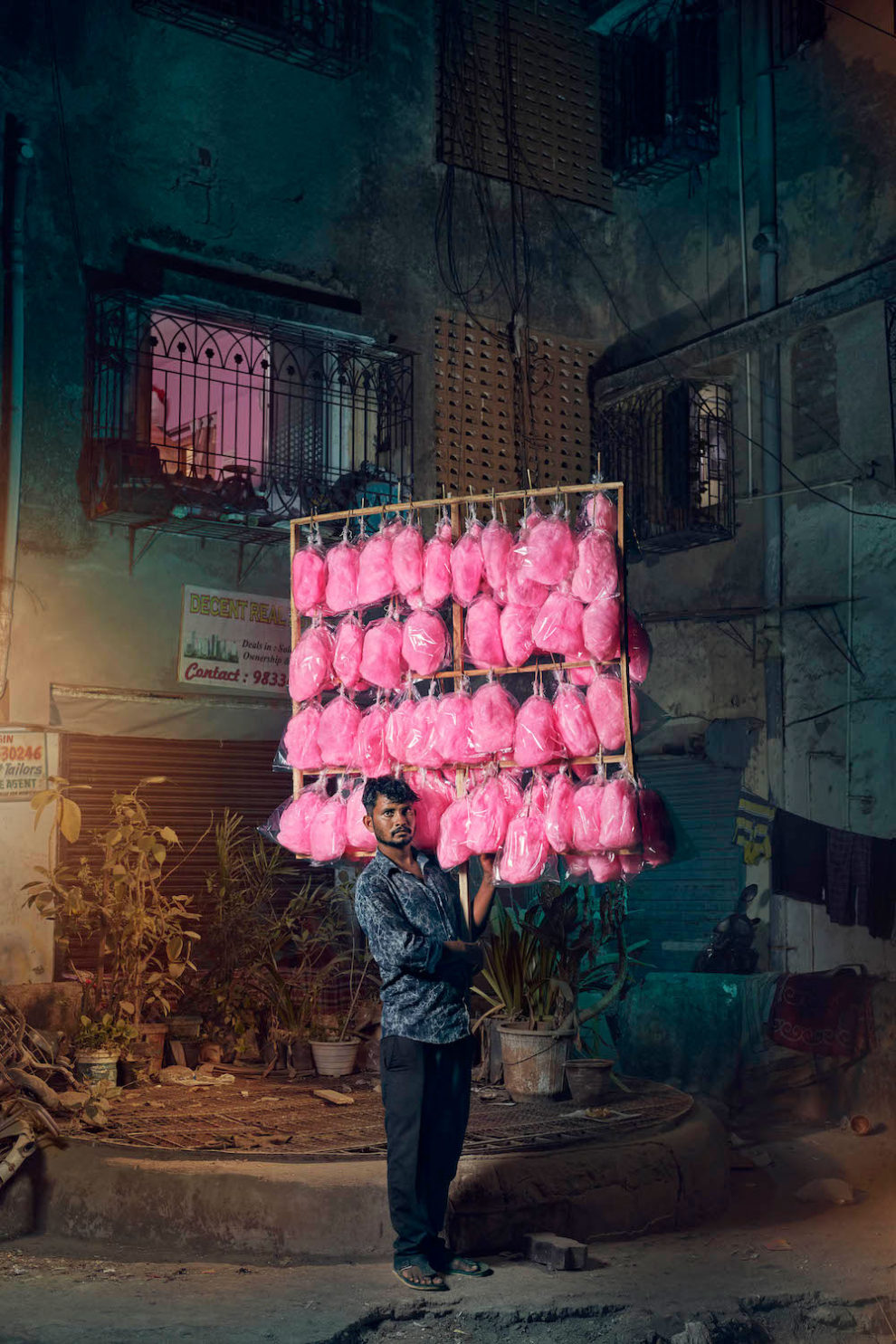 “My photography projects tend to capture a fast-changing world and how traditional aspects of a large city are changing – for better or worse – through the embracing of modernity.

“The images were taken at night time, partly due to logistics – it’s cooler and usually quieter – and partly because it gives me the chance to experiment with lighting and create a specific portrait of these candy floss sellers. 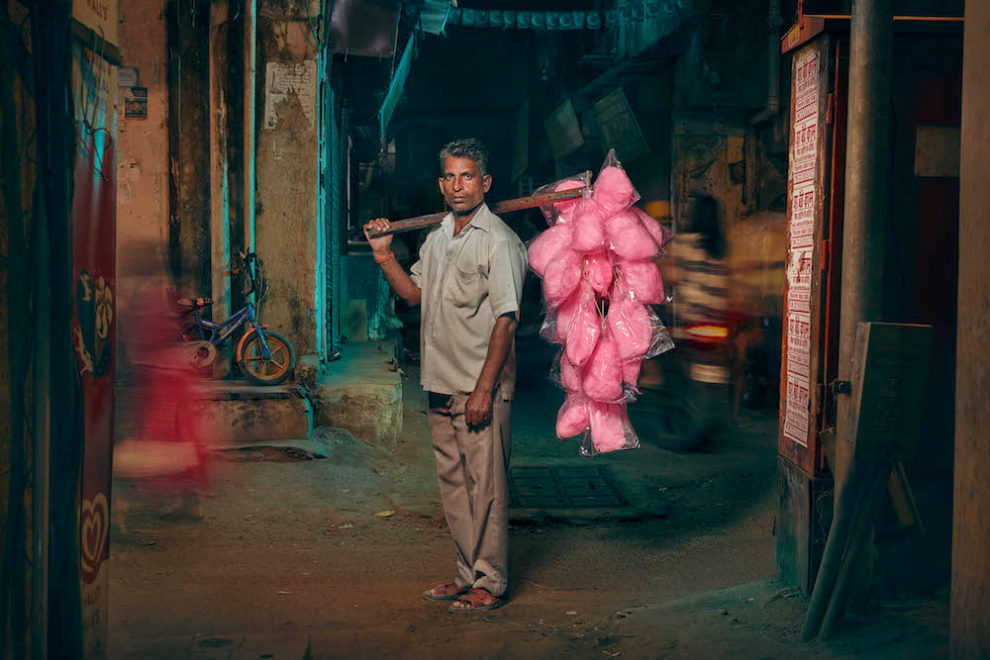 “However, I found it fascinating that in Mumbai, it was never quiet and it was hard to find a space that wasn’t crammed with people. Life just goes on – day and night!” 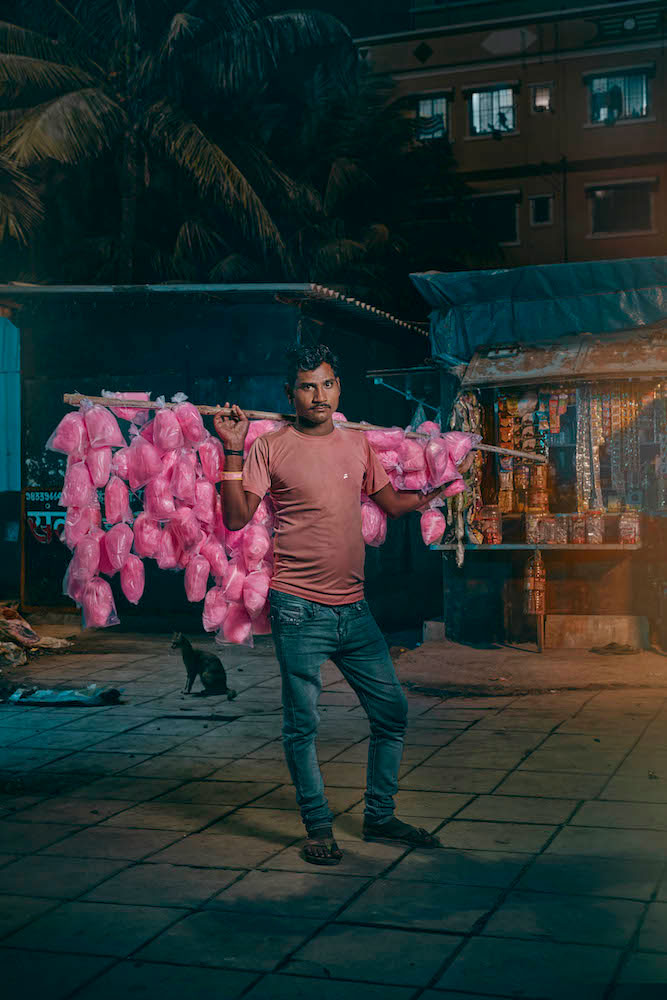 Jon Enoch is an award-winning lifestyle and portrait photographer and won the prestigious Smithsonian award 2020 for his images of Hanoi motorcycle delivery drivers, and was also nominated for the Sony World Photography Awards, Portraits of Humanity and The AOP Awards. 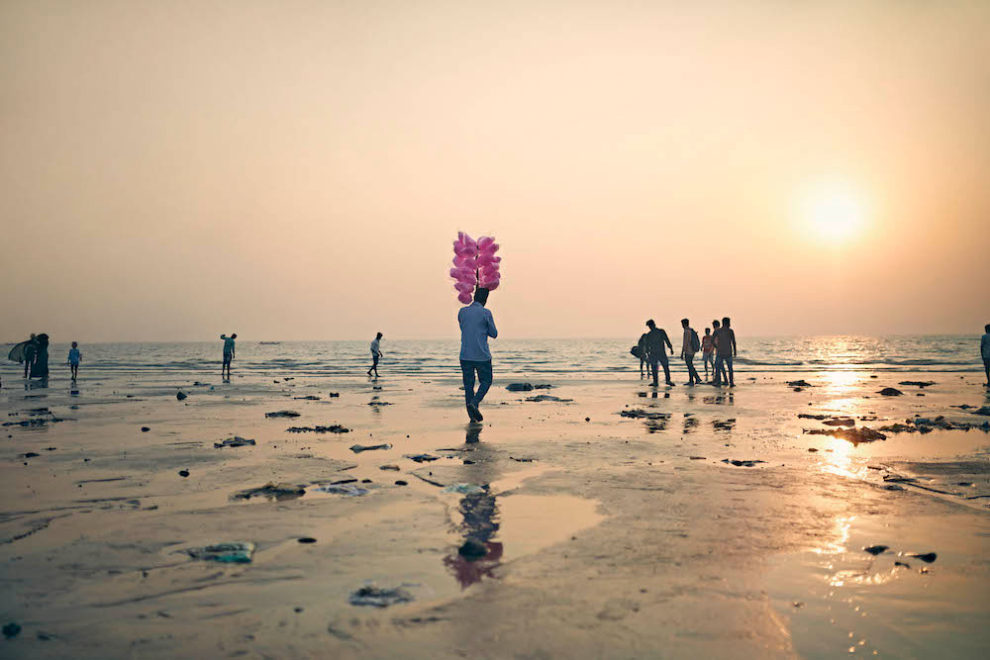 Remarkable Behind-The-Scenes Photos From 'Back To The Future' That Will Bring You Back To The '80s
Stunning Photos Of American Women At Work During World War II
Photographs Of 'El Segundo Barrio' Of El Paso In 1972 By Danny Lyon
Photo of the Day: The Annual Muscle Beach Championship
French World War I Soldier’s Bedroom Untouched For Over 100 Years
My Little Friends: Photographer Captures Drops Of Water Reflecting Various Images Beyond
Japan’s First Female Photojournalist Is Still Shooting At The Age Of 101
Protests, Nature and A World in Lockdown Are Captured from Above in Drone Photo Awards 2020
Photographer Captures Funny Portraits Of Celebrities From 1960s
Serbian Photographer Brings Slavic Goddesses Vesna And Lada Back From Ancient History To Life
Spectacular Winning Photos Of The National Geographic 2018 Photo Contest
Photographer Captures Fantastic Photos of New York Reflected in Glass
Mila Kunis is New Face of Christian Dior Spring/Summer 2012
Photographer Shares His Favourite Shots Of The Landscapes Of England
Powerful Photos Of Awful Liverpool Housing By Nick Hedges 1969-71
A Photographer Took Glorious Colour Photographs Of London In Early 1970s
This Egyptian Photographer’s Series on the Giza Pyramids is Absolutely Breathtaking
Capturing The Beauty Of The First Day Of Motherhood Through Photo
Photographer Michael Lee Captures London Like You’ve Never Seen Before
People of 'Porte St Denis' by Johan Berger
Street Scenes of the U.S. From the 1960s Through 30 Wonderful Color Real Photo Postcards
Fascinating Images from the Past You Won’t Find in Any History Textbook
Cold Iceland Through The Lens Of The Photographer Tom Kondrat
Vivian Maier: Lost Photographs Of 1950s New York
floss, india, Jon Enoch, mumbai, sellers

2016 UK Wildlife Photographer Of The Year Finalists
Amazing Portraits Of Louis Coulon And His 11-Foot Beard As A Nest For His Cats
XCIA: Street Illegal
Photographer Hitchhikes Across Europe To Take Powerful Portraits Of Self-Ruling People
Photographer Finds Something Incredible After Flipping His Photo
Stunning Images From The UK Wildscreen Festival 2016, The Internationally Renowned Festival That Celebrates And Advances The Art Of Natural World Storytelling
This Time Travelling Instagrammer Got Stuck Somewhere In The 1950s
People of 'Porte St Denis' by Johan Berger
42 Stunning Restored And Colorized Historic Images Bring The Past To Life
Stunning Minimalist Architecture Photography By Kevin Krautgartners
Source of inspiration since 2007. Proudly hosted by WebHostingBuzz.
Privacy Policy · Terms of Service · Content Removal Policy 🇺🇦 ❤️