The Insight Astronomy Photographer of the Year competition, sponsored by Insight Investment, is an annual global search for the most beautiful and spectacular visions of the cosmos by amateur and professional astrophotographers. The winning images are showcased in a stunning exhibition at the Royal Observatory Greenwich. 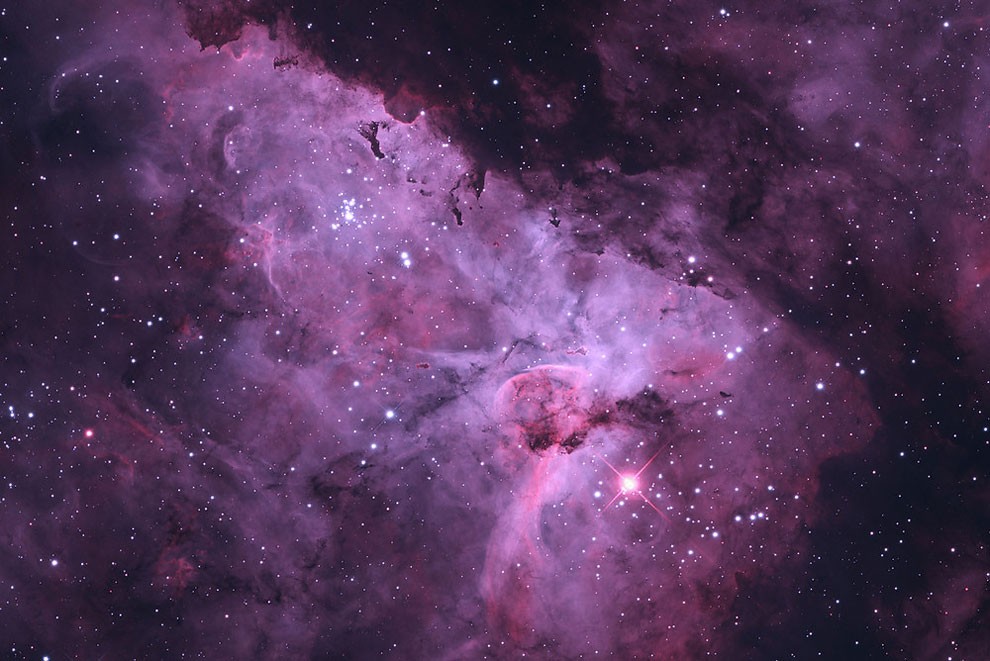 Great Nebula in Carina Bi-Colour. The hypergiant star Eta Carinae glows against the background of swirling clouds of dust and gases that form the Carina Nebula. The Carina Nebula is one of the largest diffuse nebulae – meaning that it has no well-defined boundaries – in our skies and is about four times as large as the famed Orion Nebula. (Photo by Terry Robison) 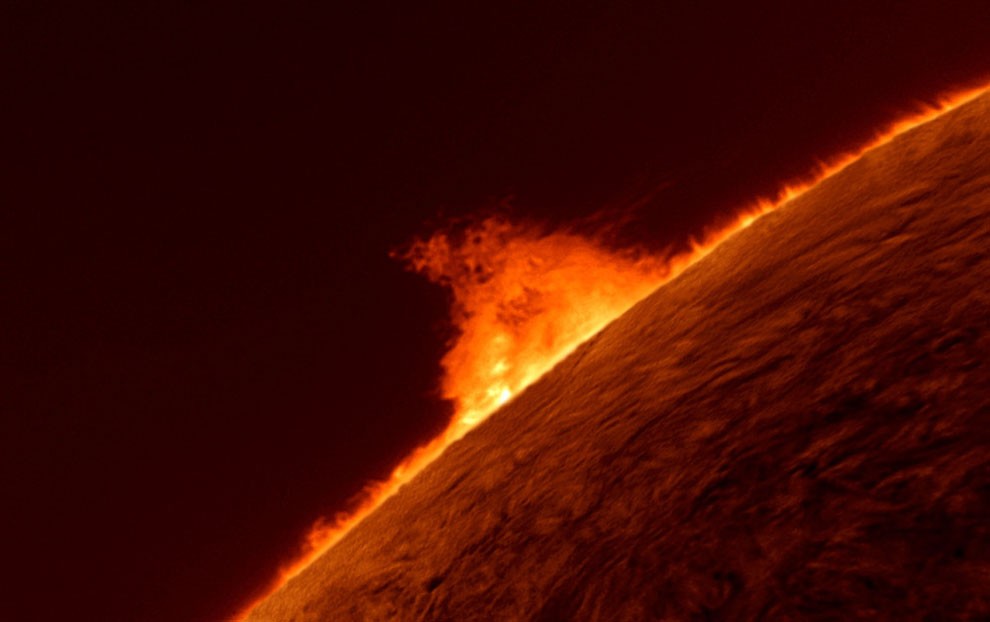 Solar Prominence. Searing hot loops of plasma radiate from the edge of our local star – the sun – in a phenomenon known as a solar prominence. Emanating from the sun’s outer shell, from which light is emitted, prominences extend to the corona, which is the aura of the plasma surrounding it. A typical prominence covers over thousands of kilometres, with the largest ever recorded estimated to be over 800,000 kilometres, equalling roughly the radius of the sun itself. (Photo by Gary Palmer) 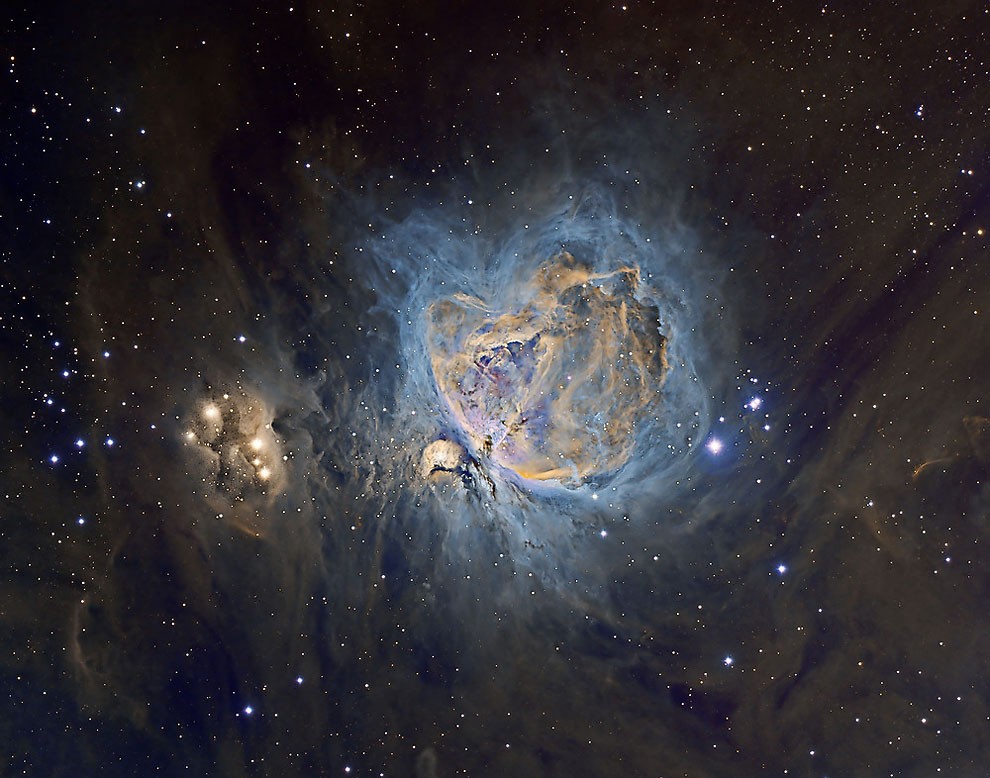 M42 Subtle V1 cropped. One of the most well-known astronomical objects in our universe is the Orion Nebula and this image depicts the wider region of the Orion Molecular Cloud Complex that is its home. This complex also includes another popular target for astrophotographers, the Horsehead Nebula, as well as Barnard’s Loop and the Running Man Nebula, which can be seen to the left of this photograph. (Photo by Patrick Gilliland) 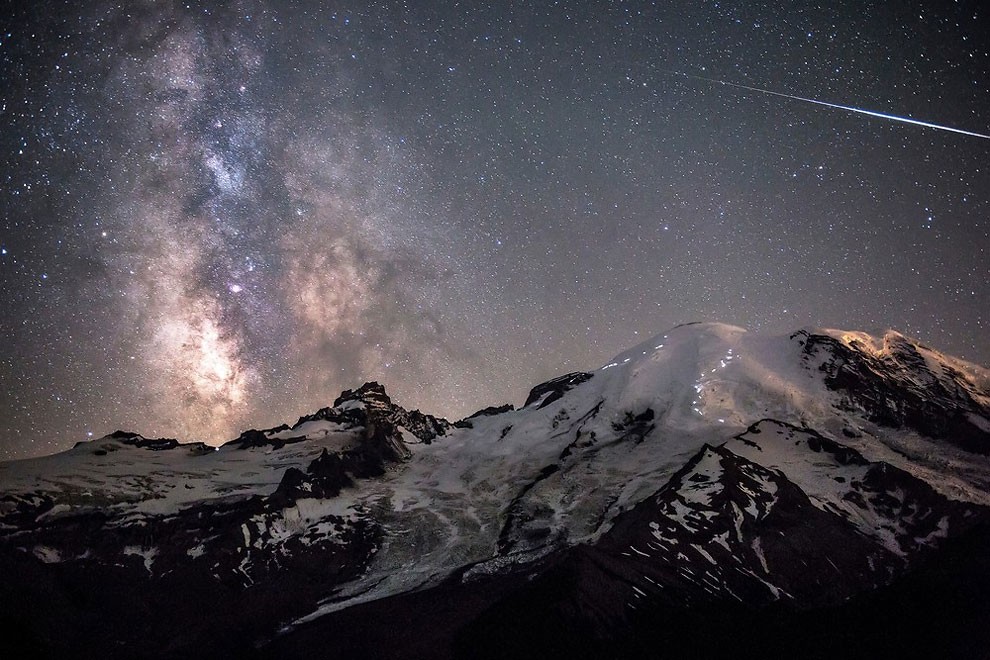 Ascent of Angels. A meteor can be seen piercing through the darkness as the Milky Way towers above the 4,392m peak of Mount Rainier in Washington, USA. The white lights dotted across the rocky paths of the mountain’s face are the headlamps of hikers ascending to the peak. (Photo by Brad Goldpaint) 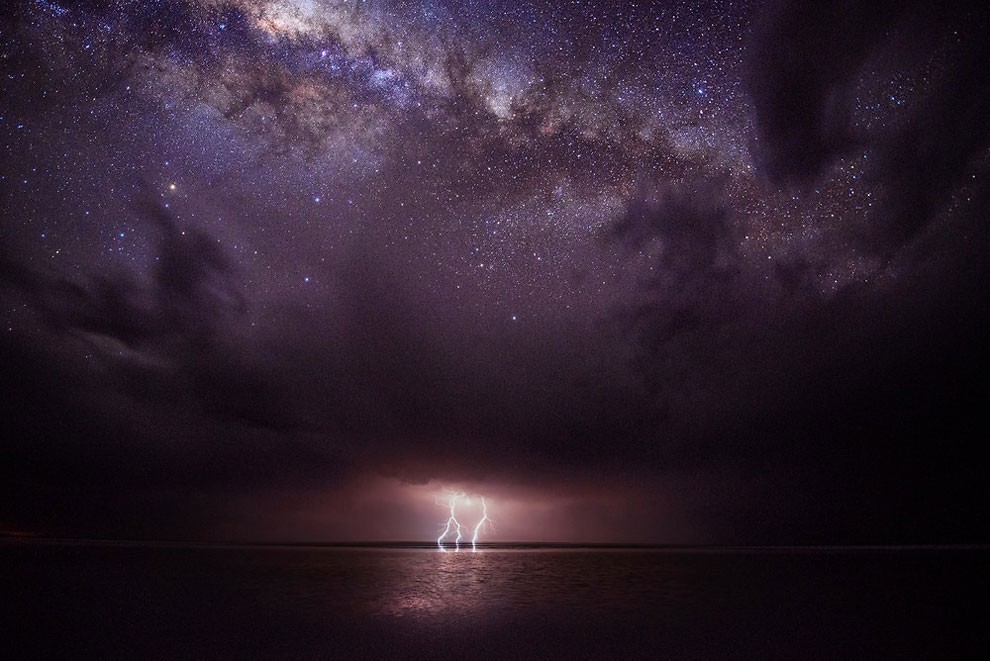 Calm Before the Storm. A phenomenal natural light show of a lightning storm emanating from the underside of ominous storm clouds, juxtaposed with the gleaming stars of the Milky Way above. (Photo by Julie Fletcher)

Aurora Panorama 3. The vivid green Northern Lights dance above Lyngenfjord, Norway, tracing out the shape of the Earth’s magnetic field above the waters. Green, the most common colour associated with aurorae, is produced by oxygen atoms and molecules energised by the impact of solar particles that have escaped the sun’s atmosphere, causing them to glow brightly. (Photo by Jan R. Olsen) 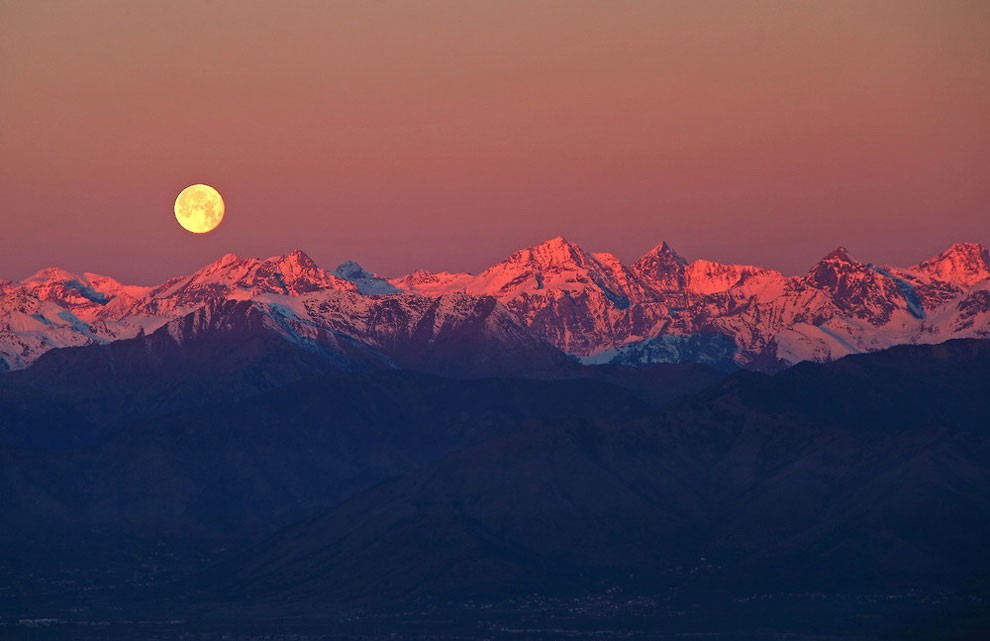 Full moon over the Alps. The majestic sight of the full moon setting behind the rose-tinted Alps. Taken in the silent surroundings of Superga hill in Turin, Italy, mere minutes before sunrise. (Photo by Stefano de Rosa) 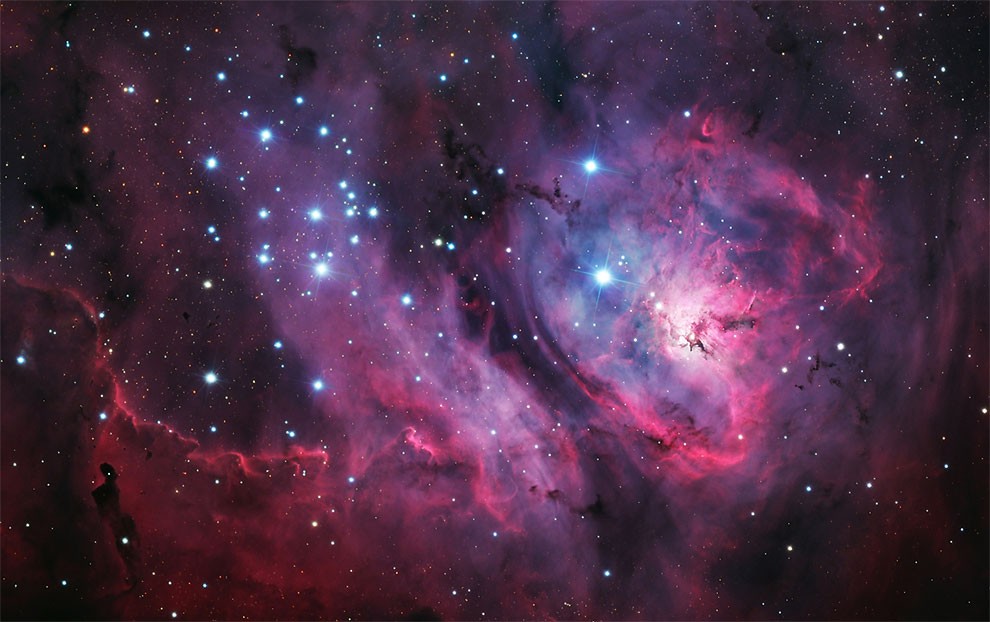 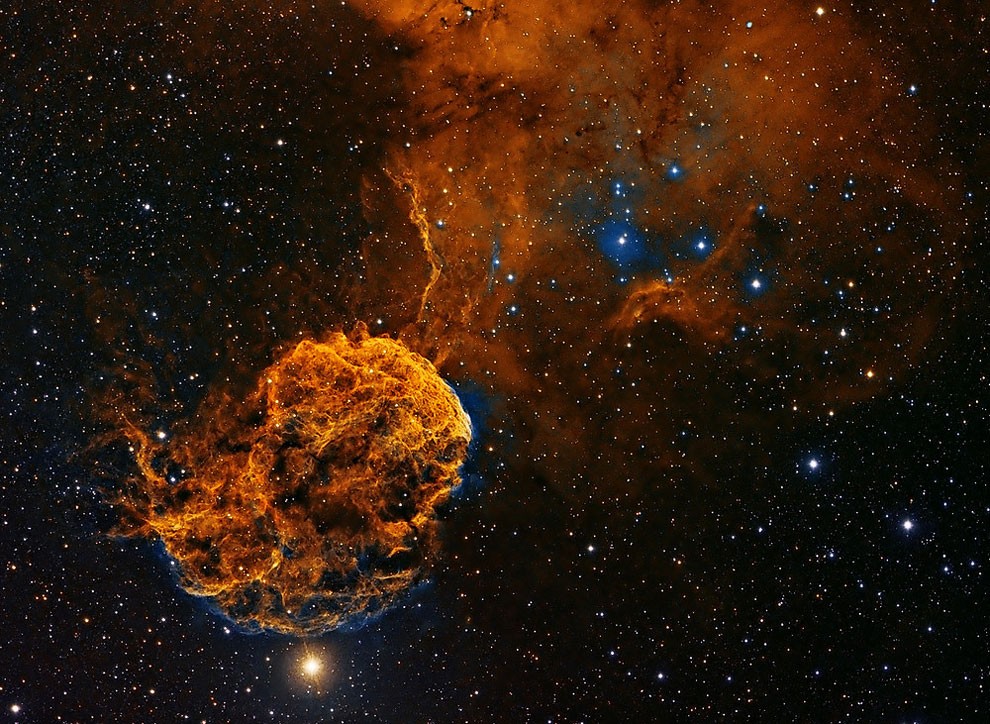 IC443. Lying in the constellation of Gemini, IC443 is a galactic supernova remnant, a star that could have exploded as many as 30,000 years ago. Its globular appearance has earned the celestial structure the moniker the Jellyfish Nebula. (Photo by Patrick Gilliland) 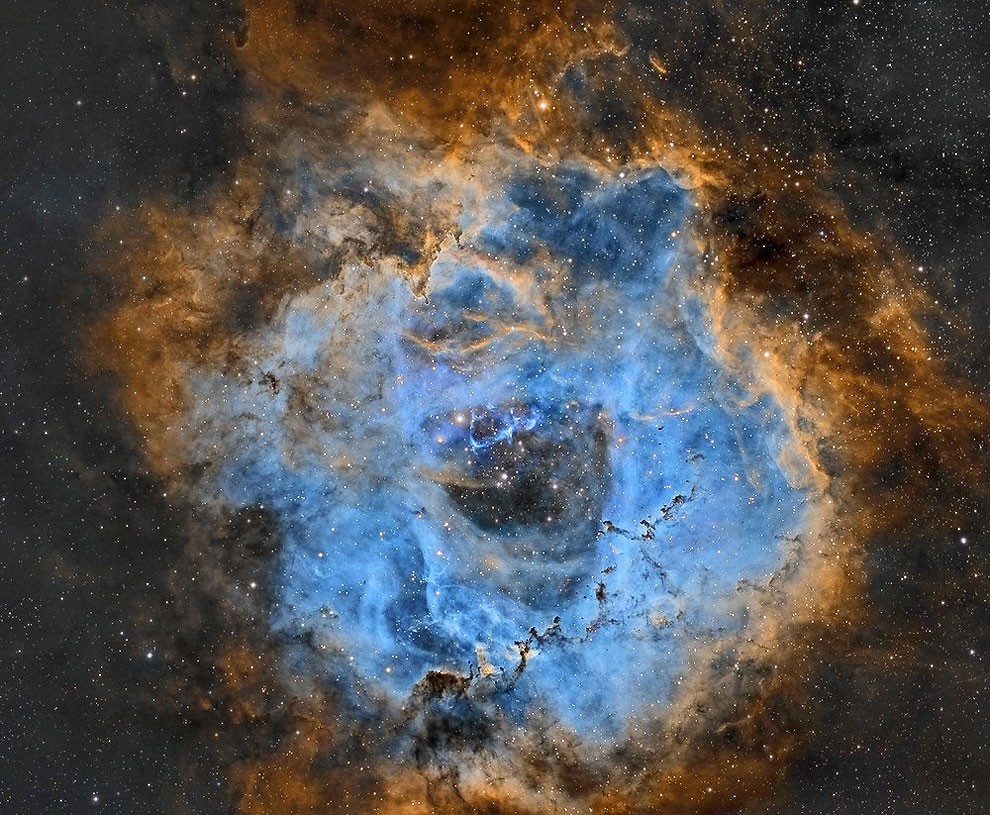 Roseta-NBv5. Measuring 50 light years in diameter, the large, round Rosette Nebula is found on the edge of a molecular cloud in the constellation of Monoceros the Unicorn. At the core of the nebula the very hot young stars have heated the surrounding gaseous shell to a temperature in the order of 6 million kelvins, resulting in the emission of copious amounts of X-Rays. (Photo by Juan Ignacio Jimenez) 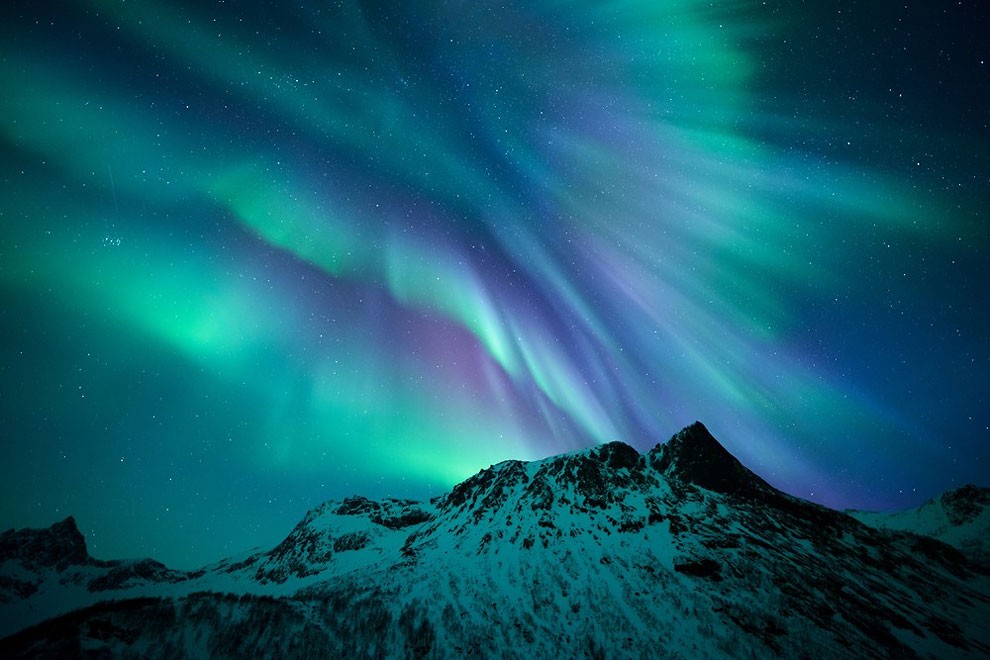 Motind. Careening over the peaks of Senja, oxygen produces the greens and nitrogen the purples seen in this particular display of the Northern Lights. (Photo by Rune Engebo) 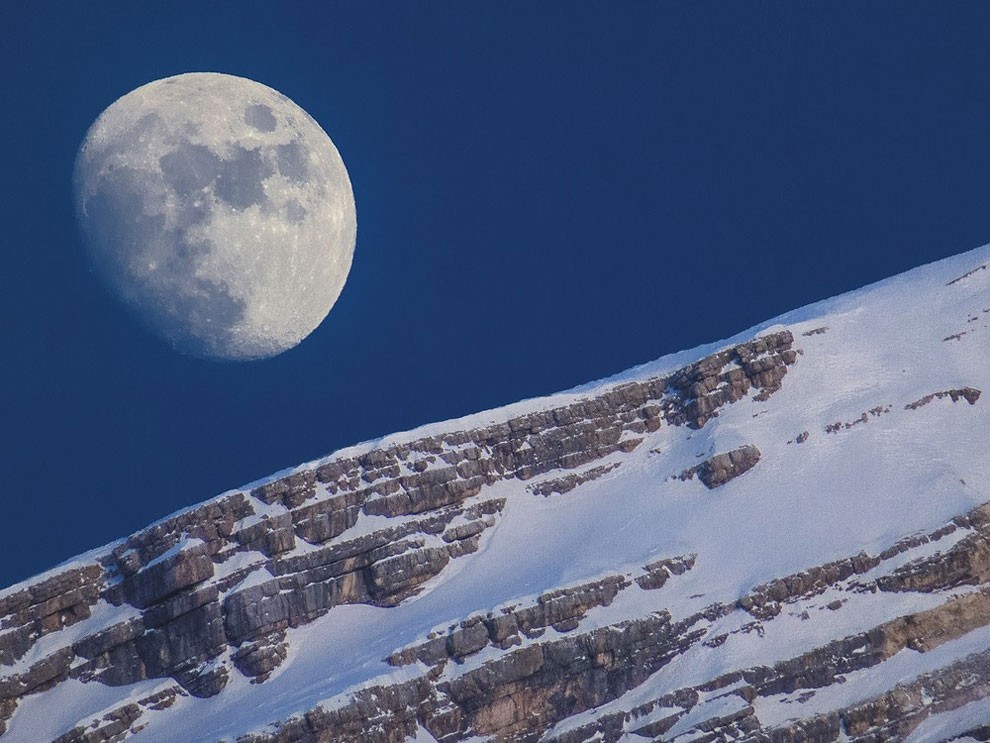 Moon and Antelao. Late afternoon at San Vito di Cadore, Italy the moon shines over Monte Antelao. The snow-covered dolomite ridge of the mountain and the Earth’s only natural satellite bear a striking resemblance to one another, contrasting against the bright blue of the afternoon sky. (Photo by Marcella Giulia) 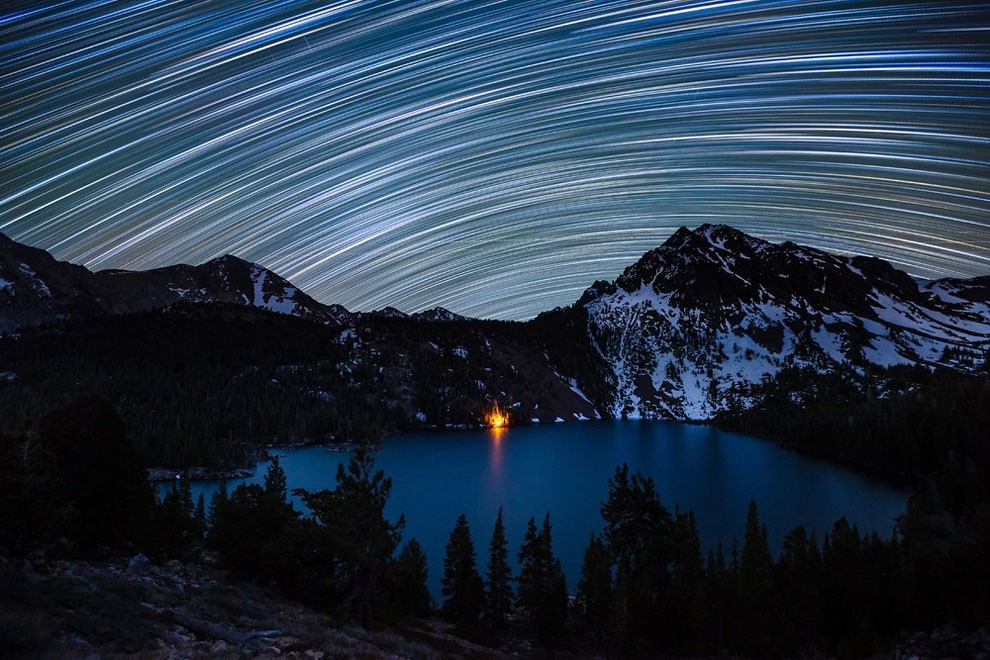 Star Trails over Green Lake. Star trails illuminate the night sky over a campfire-lit Green Lake in the Hoover Wilderness of California. (Photo by Dan Barr) 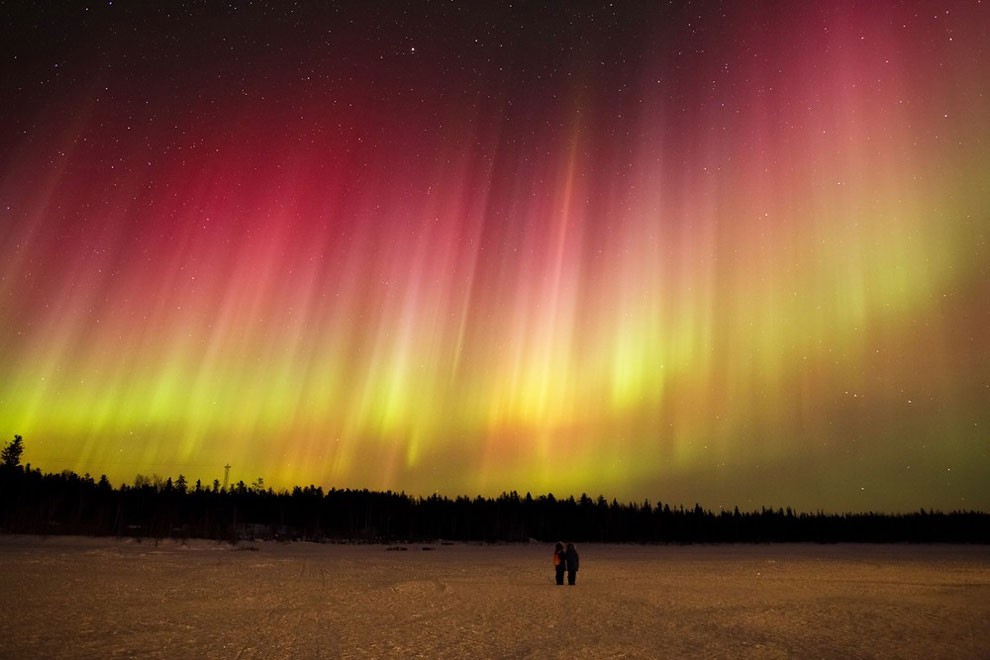 The Edge of the Aurora. A rare sighting of a red aurora, caused by the emission of high-altitude oxygen, captured on film, dancing over the small fishing town of Eyrarbakki, on the south coast of Iceland. The result of a large geomagnetic storm caused by a large coronal mass ejection. (Photo by Chul Kwon) 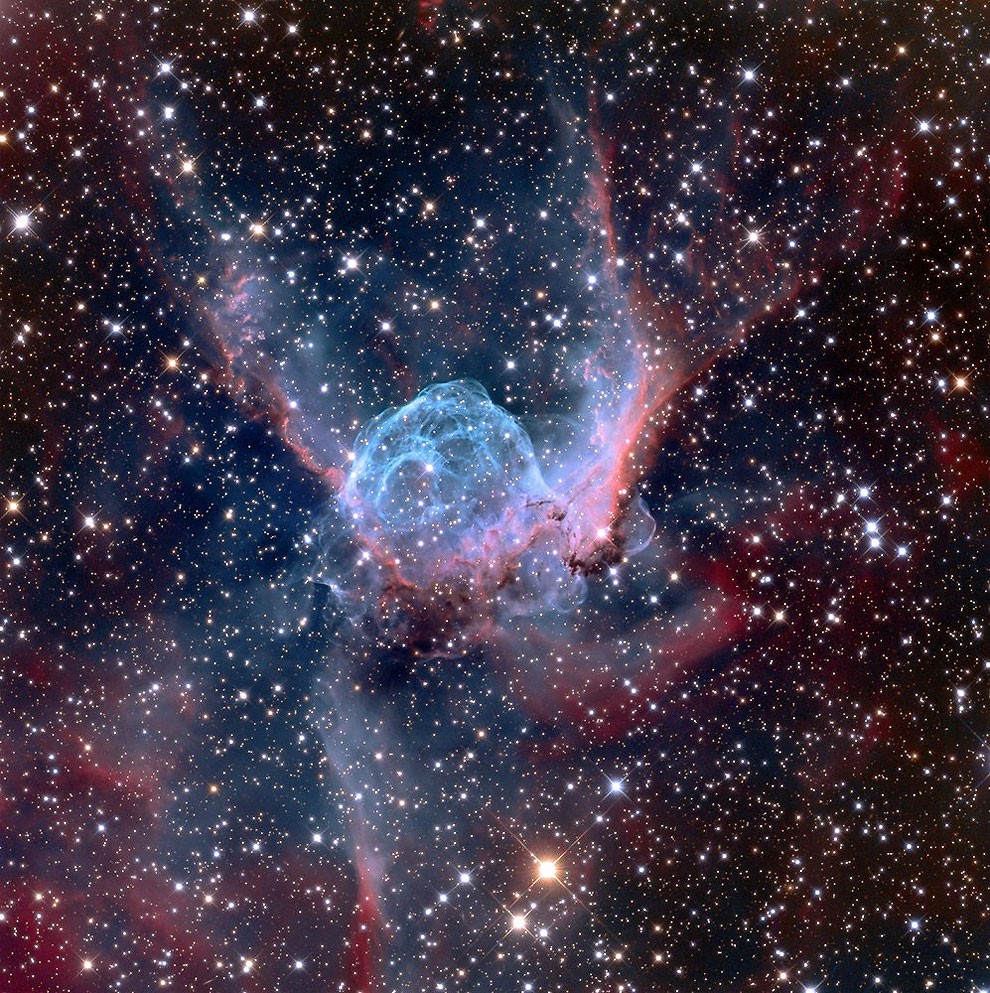 Thor’s Helmet (NGC 2359). The distinctive shape of the nebula NGC 2359 has led to it also being known as Thor’s Helmet, as it resembles the headgear of the Norse God (and Marvel superhero). Around 11,000 light years away, the overall bubble shape is mainly due to interstellar material swept up by the winds of the nebula’s central star, Wolf-Rayet, an extremely hot giant thought to be in a pre-supernova stage. (Photo by Adam Block) 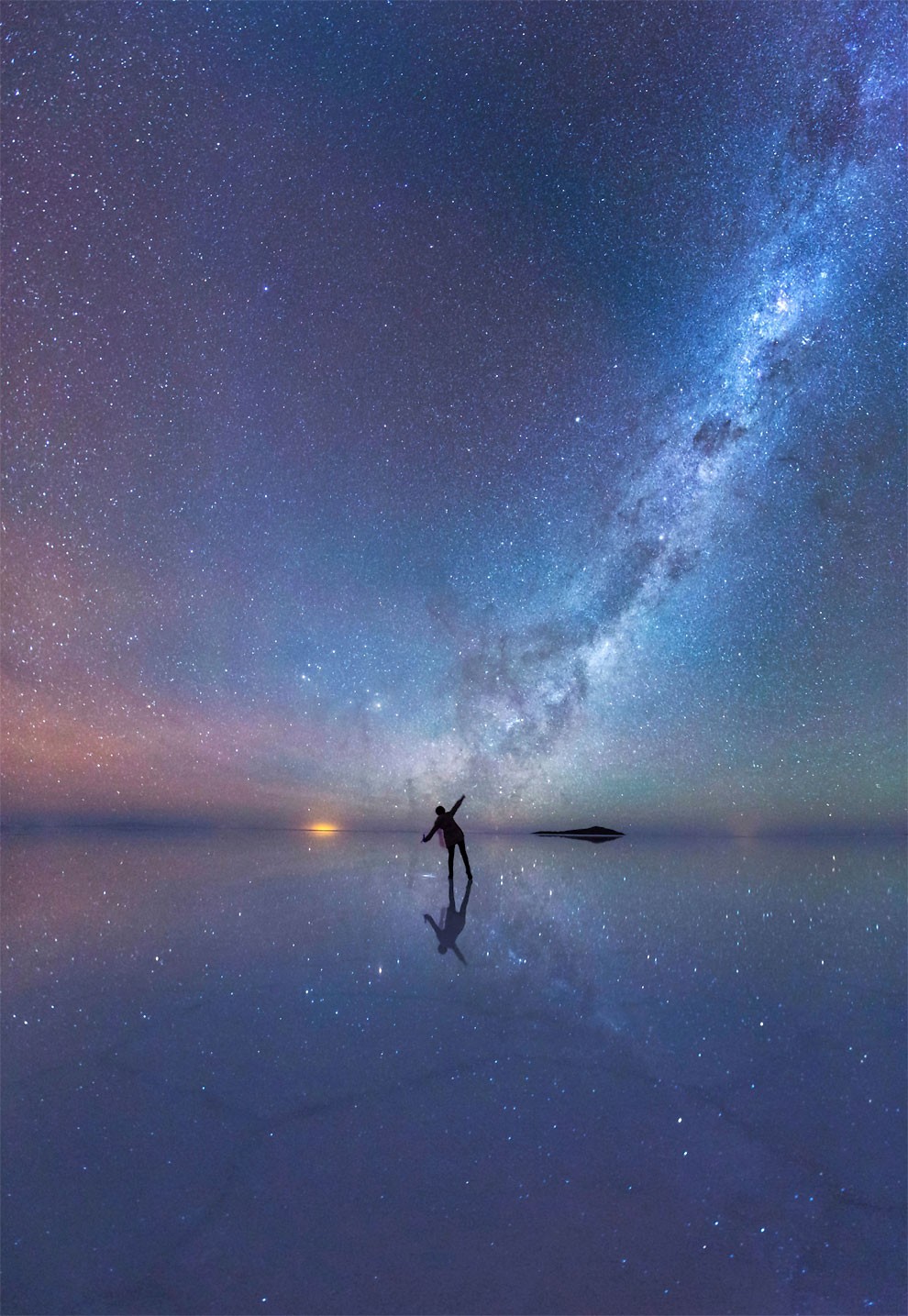 The Mirrored Night Sky. An enthralled stargazer is immersed in the stars as the luminous purple sky is mirrored in the thin sheet of water across the world’s largest salt flat, Salar de Uyuni, in Bolivia. (Photo by Xiaohua Zhao) 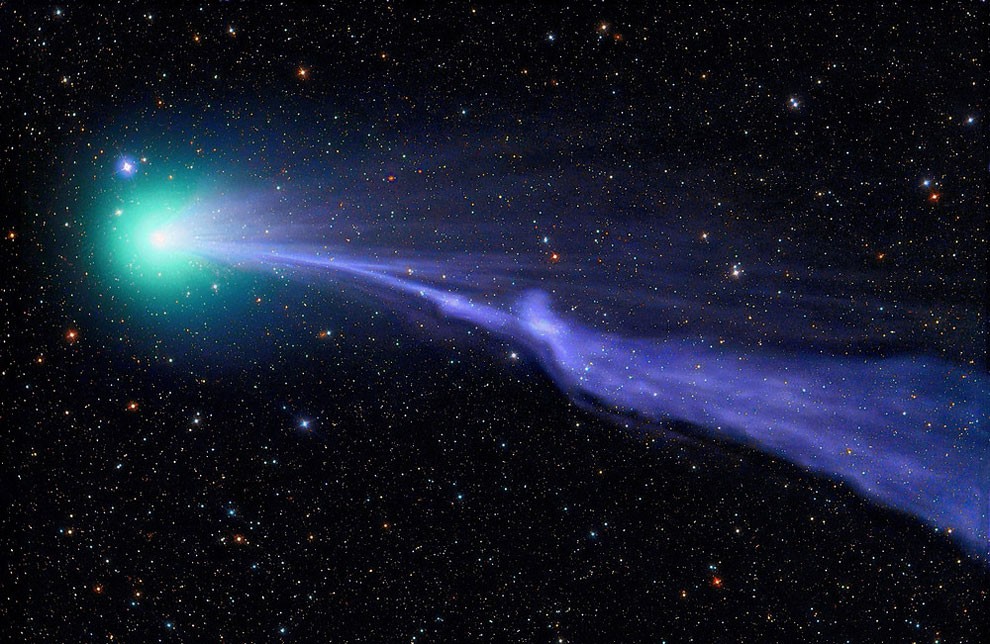