Five gargantuan oaks, one of which is said to have provided the inspiration for the fantasy land of Narnia, and a spectacular ‘portal rowan’ are among the unique specimens in the running to be crowned the Woodland Trust’s tree of the year for 2022. 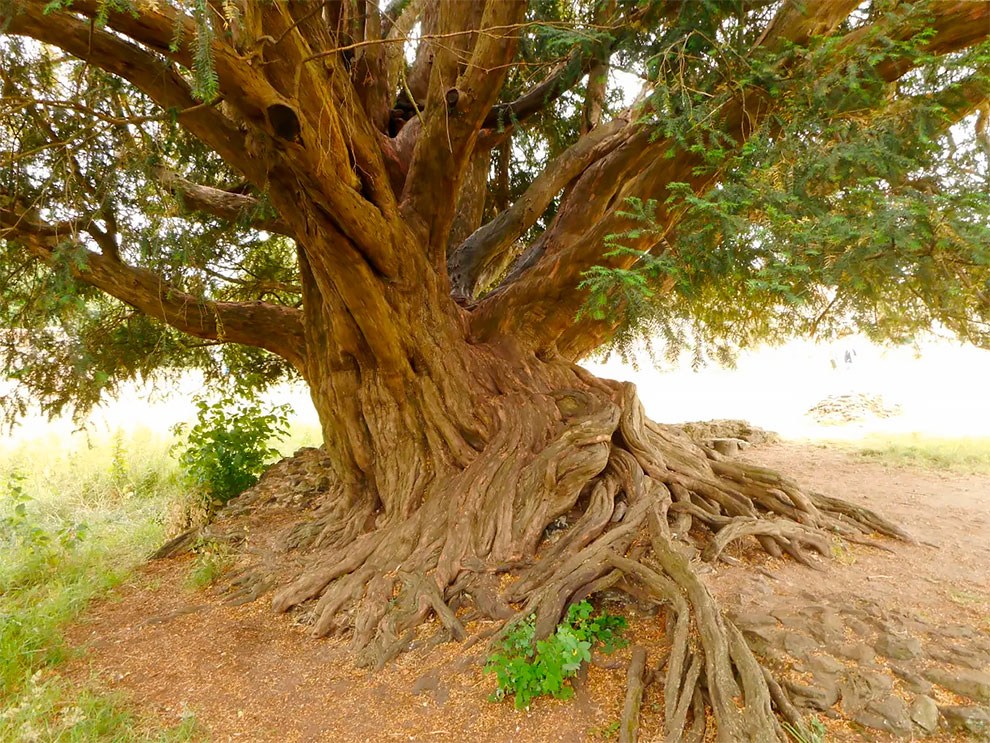 A truly spectacular yew, with roots that grow into and around the ruins of Waverley Abbey – the first monastery founded in Britain 900 years ago by the reforming Cistercian religious order. After the dissolution of the monasteries in 1536, the abbey was dismantled. It is a beautiful tree with roots that sprawl out above ground before plunging into the earth. Its multi-stemmed form is dotted with holes, crevices and areas of decay that provide a habitat for other species. Age: The exact age is unknown but it can not be more than 480 years old. Photograph: Woodland Trust 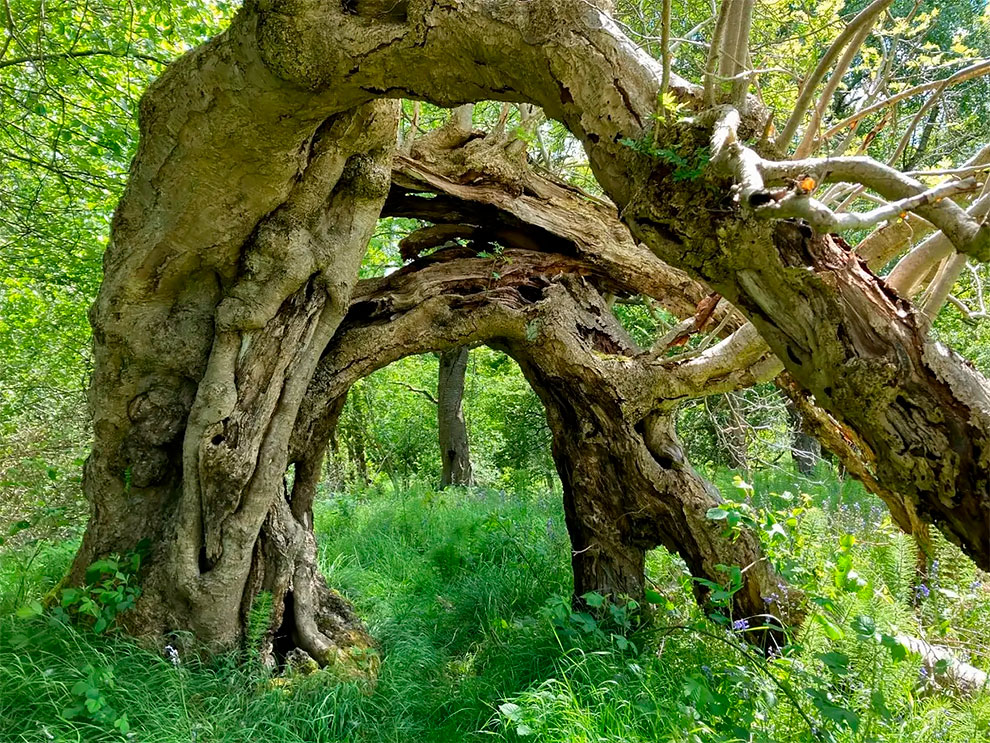 This remarkable rowan grows in the landscaped grounds of Mavisbank House, one of Scotland’s most important historic houses from the 1700s. It has extensive decay, but a huge girth and a remarkable appearance. This striking tree has bent over to form a full archway which now has growth sprouting from its top. Age: Unknown but estimated to have been planted between 1850 and 1880 and so could be over 150 years old. Photograph: Rob Hutchinson/Woodland Trust 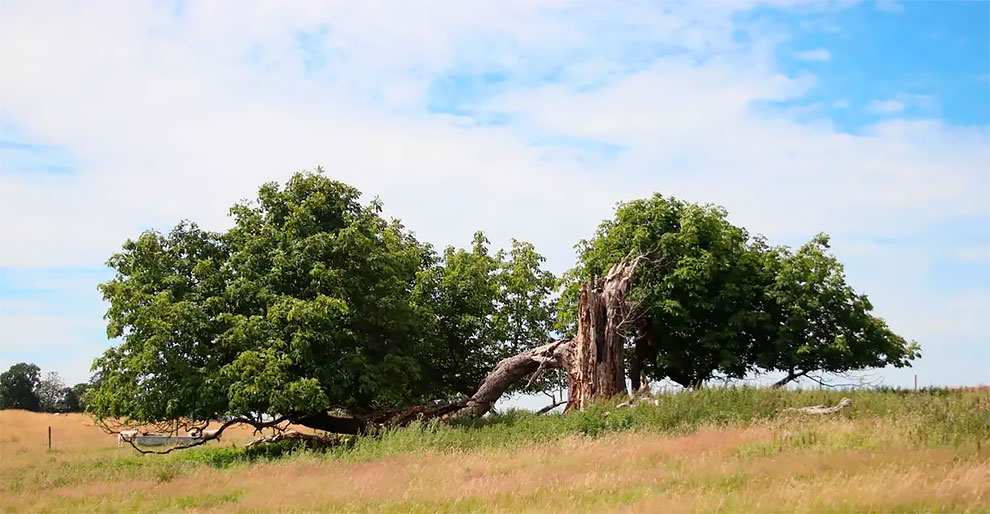 This magnificent horse chestnut has obviously suffered from trauma in the past. The original mighty trunk stands hollow and decaying, while the branches have fallen to its sides. Despite this, the tenacious tree has survived. Age: The exact age is not known but horse chestnuts can live for up to 300 years. Photograph: Helen Leaf/Woodland Trust 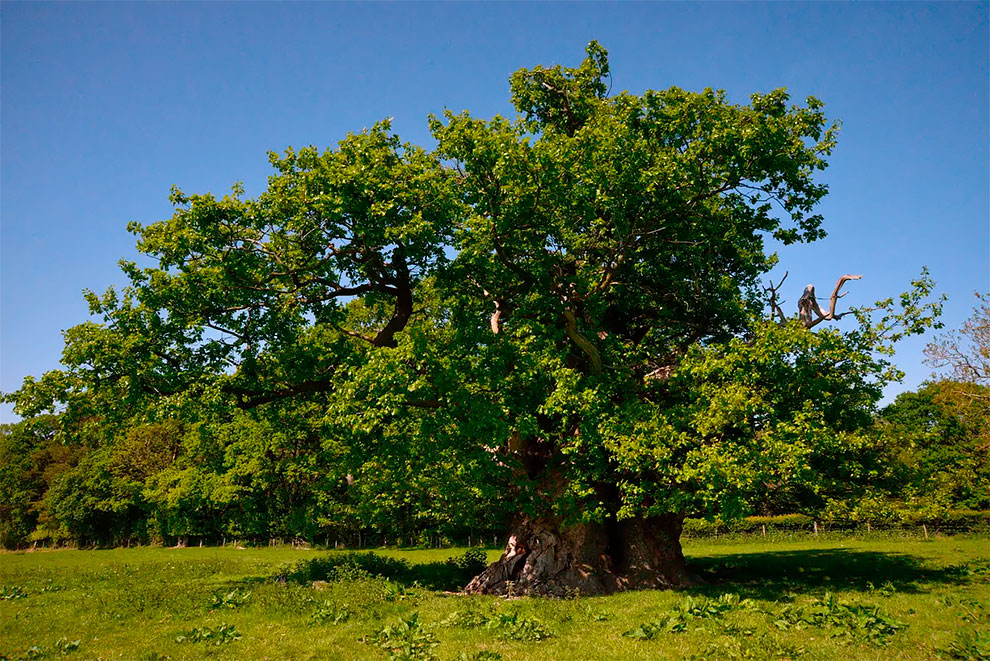 Standing alone in a meadow, this magnificent ancient oak is likely to be a chance survivor, with no historical records tying it to a managed park or forest. Over the past two years, it has remained one of the largest and oldest oaks recorded on the Ancient Tree Inventory. Location: The tree is on a public footpath north of Shobdon barn, Michaelchurch Escley, Herefordshire. Age: Exact age unknown, but likely to be at least 400-500 years old. Photograph: Aljos Farjon/Woodland Trust 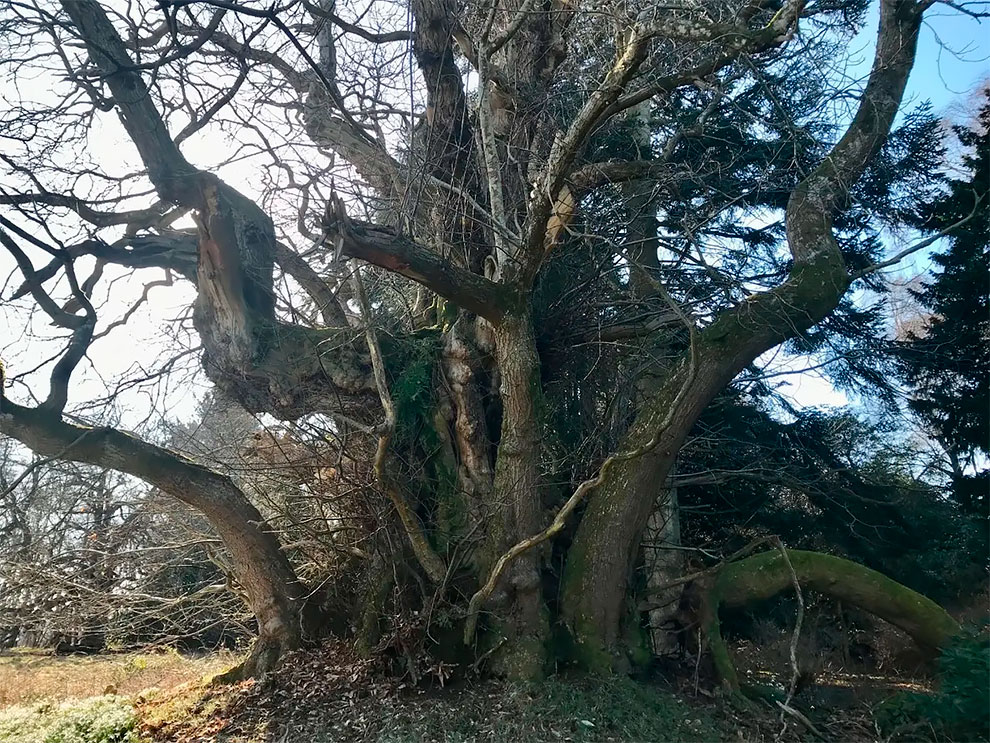 This sweet chestnut tree is in the grounds of Georgian Langley Park House, overlooking the Montrose basin, between Dundee and Aberdeen. With a girth of 7.81 metres and a very old central trunk, hollow up at the top, it is surrounded by huge branches that grow all around the main trunk like a fallen crown. Age: The age of the tree is not known. Photograph: July Dowling/Woodland Trust 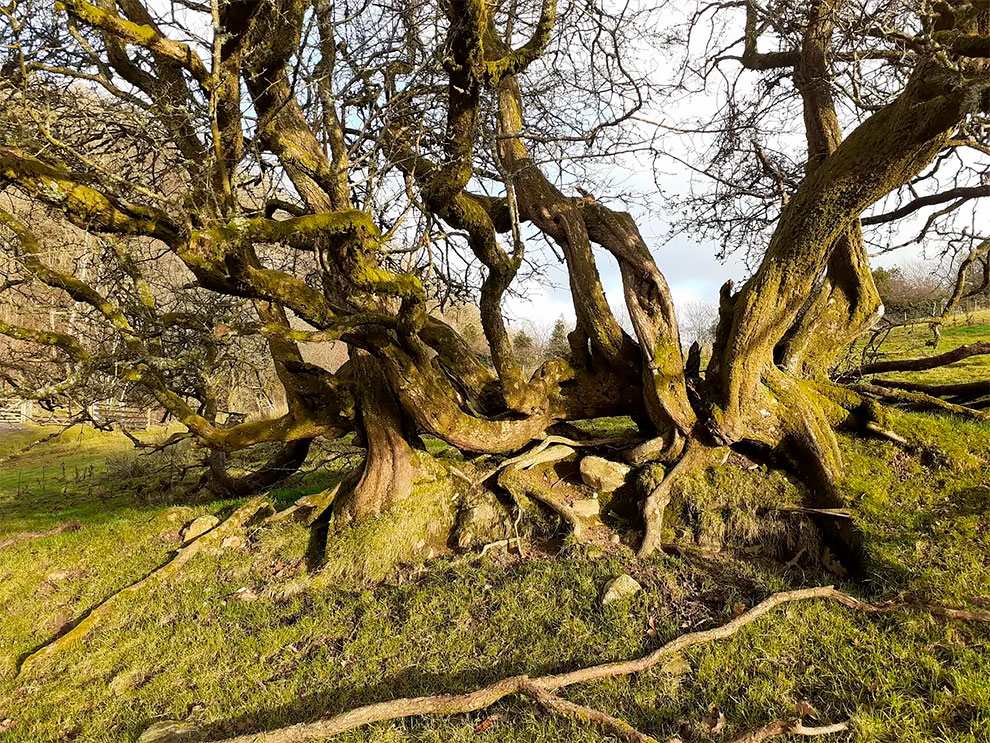 This stunning, twisted tree forms part of a small line of hawthorn trees marking a former land boundary, which is a common theme for this species. Gnarled and windswept, the tree still bears the signs of past management, with a complicated multi-stem form that has been allowed to sprawl since it ceased to be managed as a hedgerow. Age: 170-200 years old. Photograph: Woodland Trust 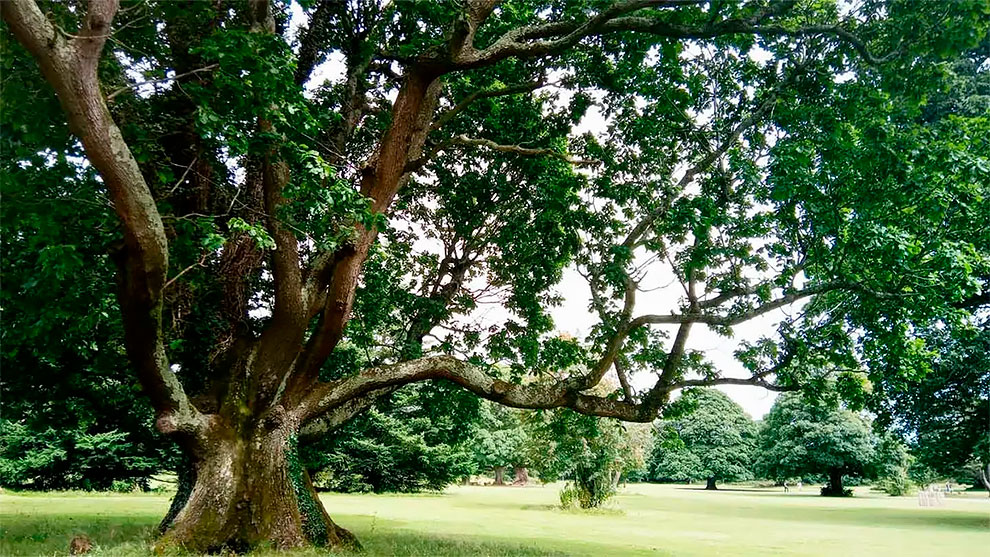 A sublime sessile oak that captures the eye with its broad, fluted form, it is festooned with an array of moss, lichen, fungi and decaying wood, which are important for local wildlife. The oak is believed to have been the inspiration for the fantasy world in CS Lewis’s Chronicles of Narnia. Age: It is thought to be more than 300 years old. Photograph: Amy McCormack/Woodland Trust 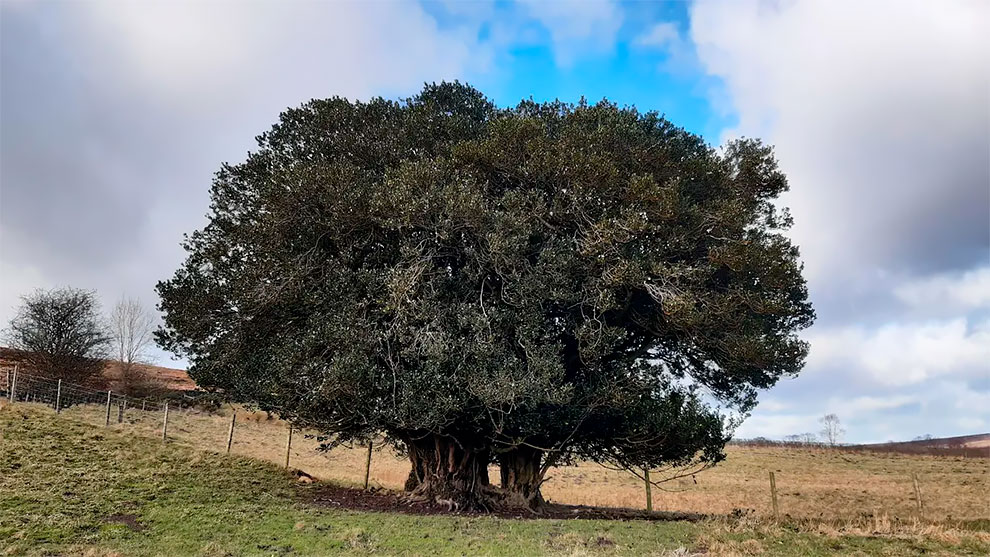 This vast tree stands out in the landscape and becomes more fascinating as you move towards it.Unusually, this striking holly has a broad rounded crown, a clue that its canopy may have beenharvested for many years. Photograph: Dan Gregson/Woodland Trust 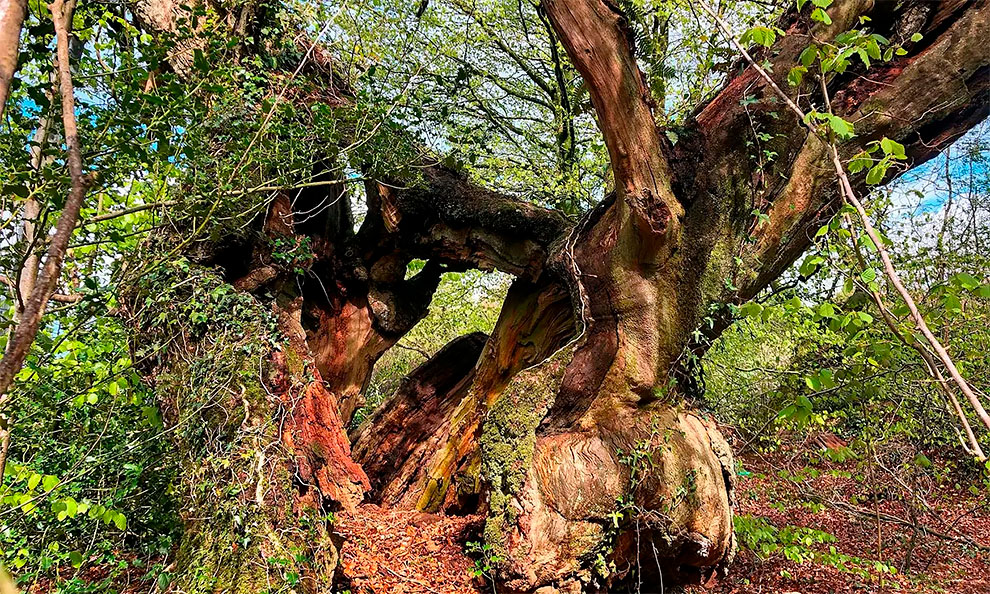 This spectacular ancient oak splays out with eight enormous limbs dripping with moss and lichen – a haven for many species. But, sadly, it is at risk of being smothered by younger trees. Location: North Molton, near Flitton Oak Barns, accessed through a gap in the vegetation. Age: The tree is estimated to be more than 700 years old. Photograph: Cheryl Duerden/Woodland Trust 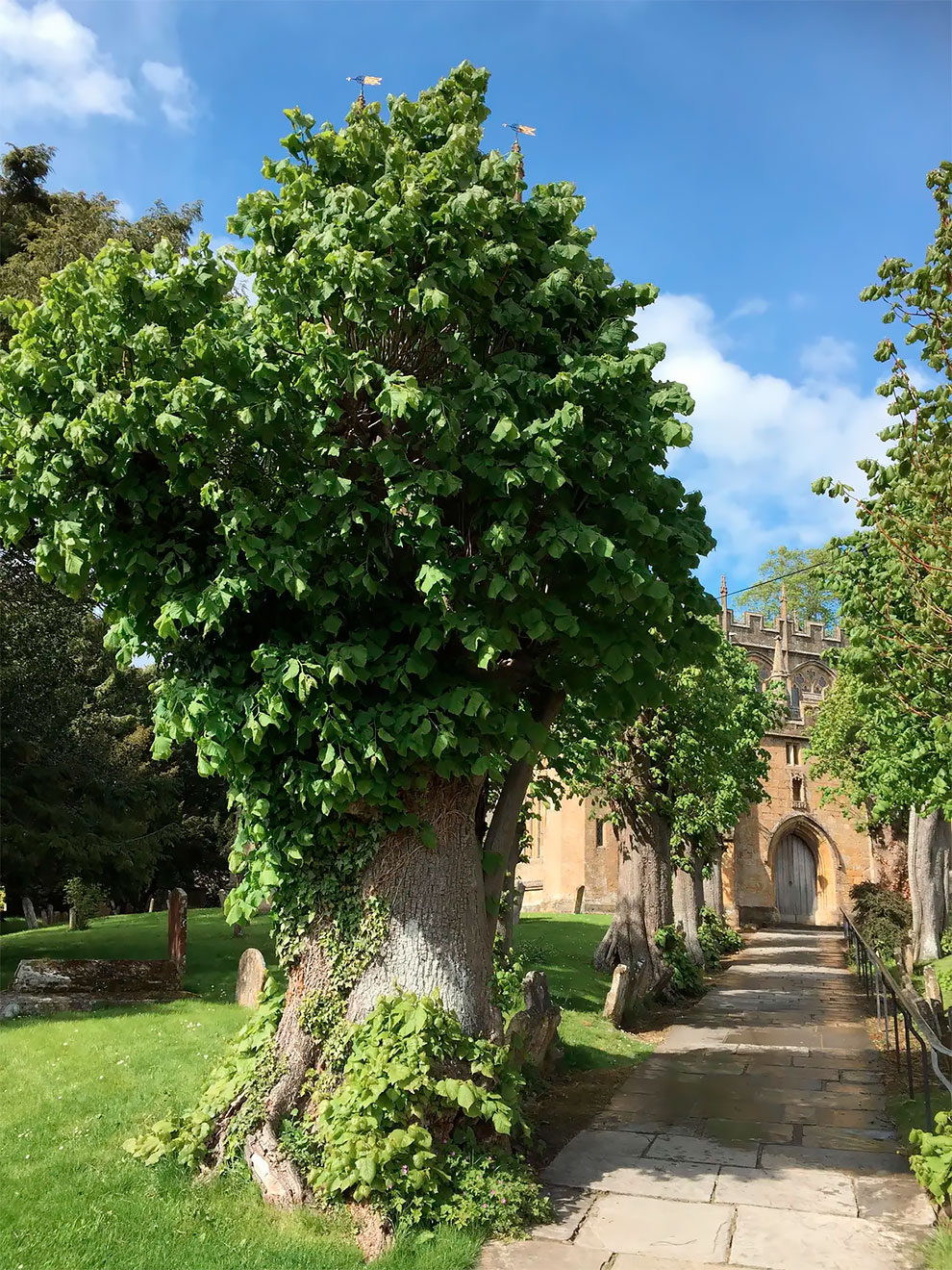 This spectacular tree is the largest of an avenue of 12 limes that were planted along the path to St James’ churchyard, to represent the 12 apostles. Historical sources suggest the original avenue may have been planted around 1770. Age: Believed to be over 250 years old. Photograph: Ann Clayden/Woodland Trust