With Halloween just around the corner, NASA has released its latest Galaxy of Horrors posters. Styled like horror film advertisements from the 1950s, they feature different exoplanets—planets that orbit stars other than the sun—and highlight what exactly makes them so frightening.

“People are often most interested in finding exoplanets that could resemble Earth or potentially support life as we know it,” Thalia Rivera, an outreach specialist at JPL who led the development of the Galaxy of Horrors posters, said in the same statement.

“But there are so many other amazing, mystifying planets out there that are completely unlike Earth and that show us the huge variety of ways planets can form and evolve,” Rivera added. “My favorite thing about exoplanets is how extreme they can get!” 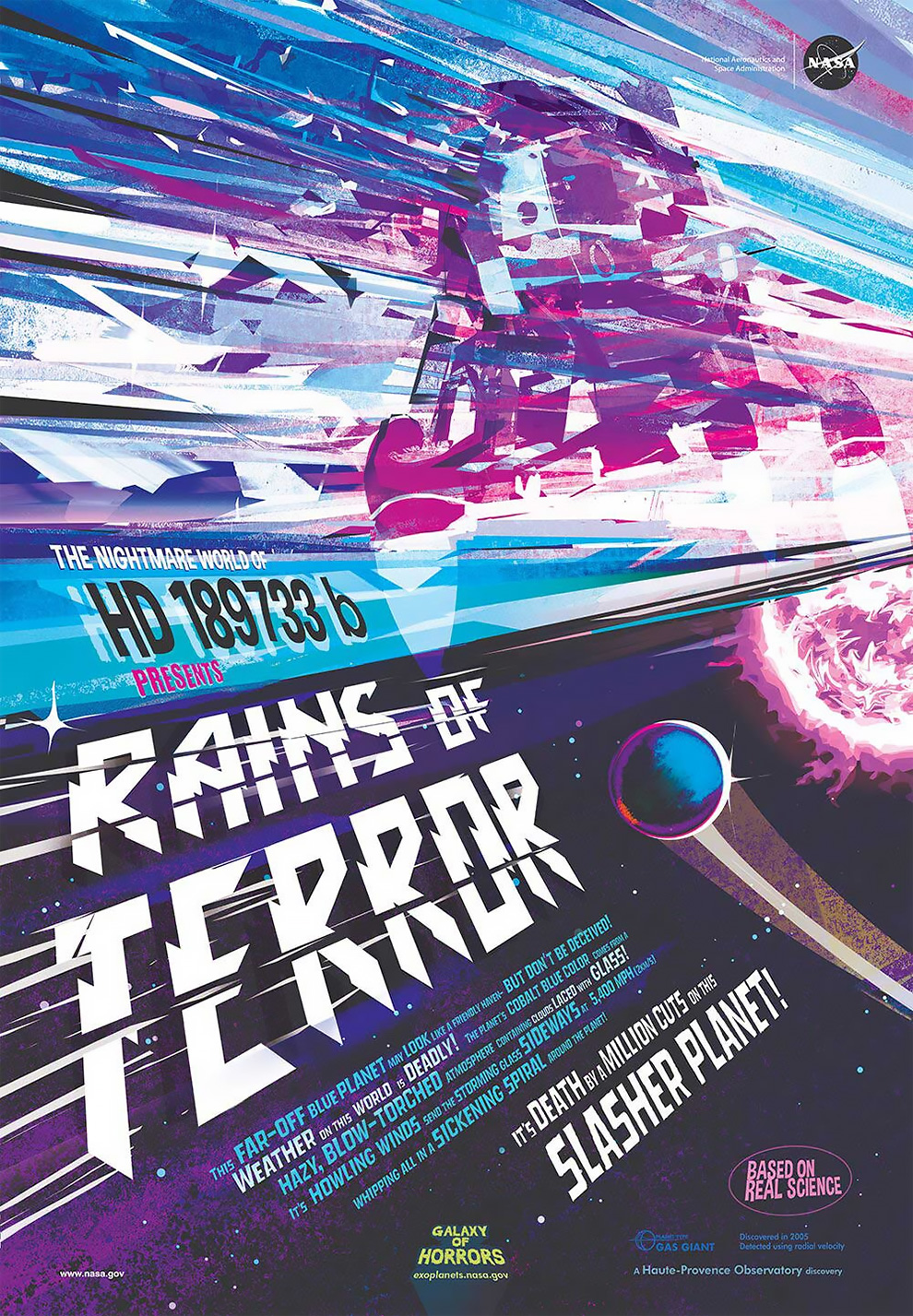 Rains of Terror: This far-off blue planet may look like a friendly haven – but don’t be deceived! Weather here is deadly. The planet’s cobalt blue color comes from a hazy, blow-torched atmosphere containing clouds laced with glass. Howling winds send the storming glass sideways at 5,400 mph (2km/s), whipping all in a sickening spiral. It’s death by a million cuts on this slasher planet! (NASA-JPL/Caltech) 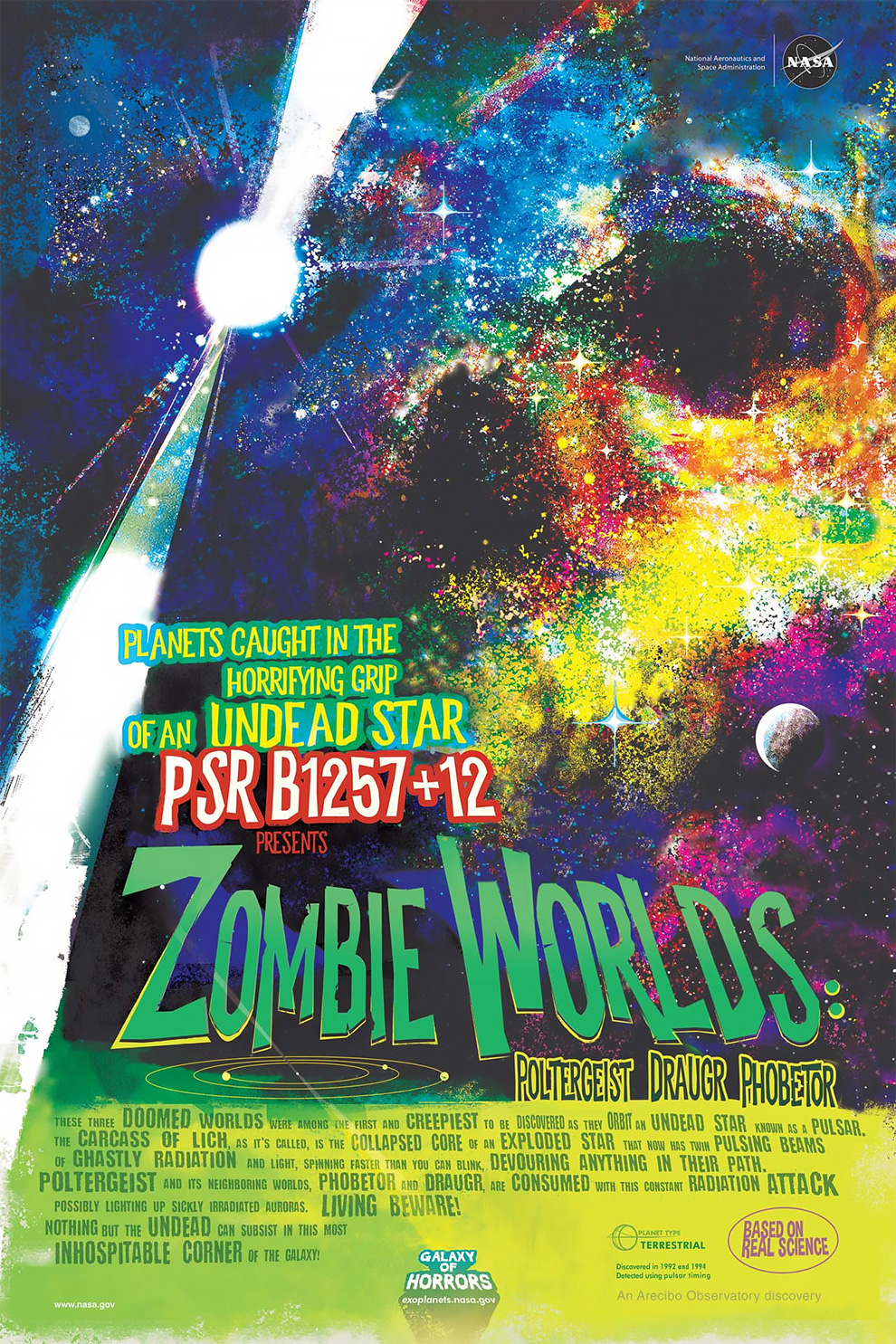 Zombie Worlds: These doomed worlds were among the first and creepiest to be discovered as they orbit an undead star known as a pulsar. Pulsar planets like Poltergeist and its neighboring worlds, Phobetor and Draugr, are consumed with constant radiation from the star’s core. Nothing but the undead can subsist in this most inhospitable corner of the galaxy. (NASA-JPL/Caltech) 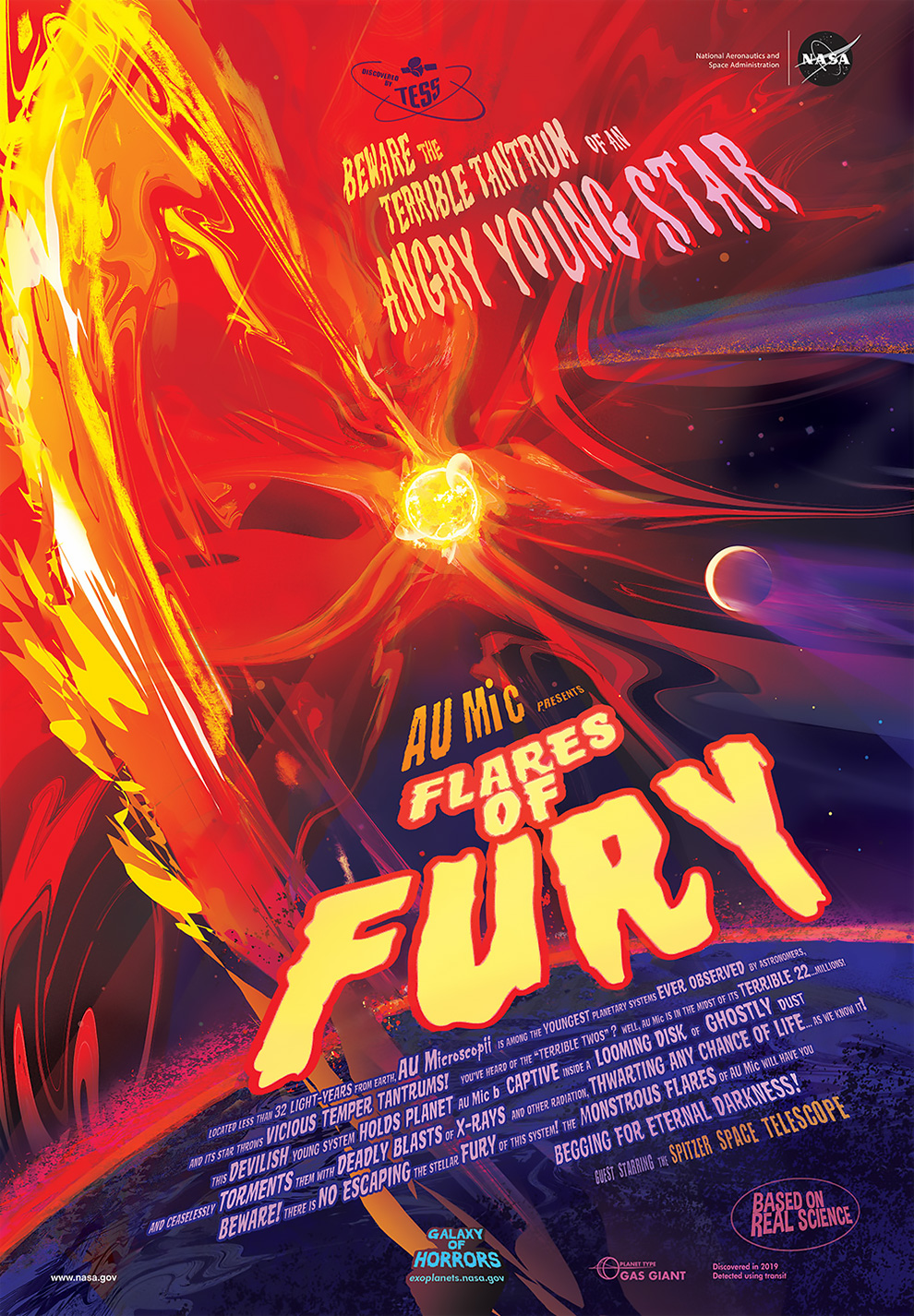 Flares of Fury: Located less than 32 light-years from Earth, AU Microscopii is among the youngest planetary systems ever observed by astronomers, and its star throws vicious temper tantrums! You’ve heard of the “terrible twos”? Well, AU Mic is in the midst of its terrible 22 … millions! This devilish young system holds planet AU Mic b captive inside a looming disk of ghostly dust and ceaselessly torments it with deadly blasts of X-rays and other radiation, thwarting any chance of life… as we know it! Beware! There is no escaping the stellar fury of this system. The monstrous flares of AU Mic will have you begging for eternal darkness. (NASA-JPL/Caltech) 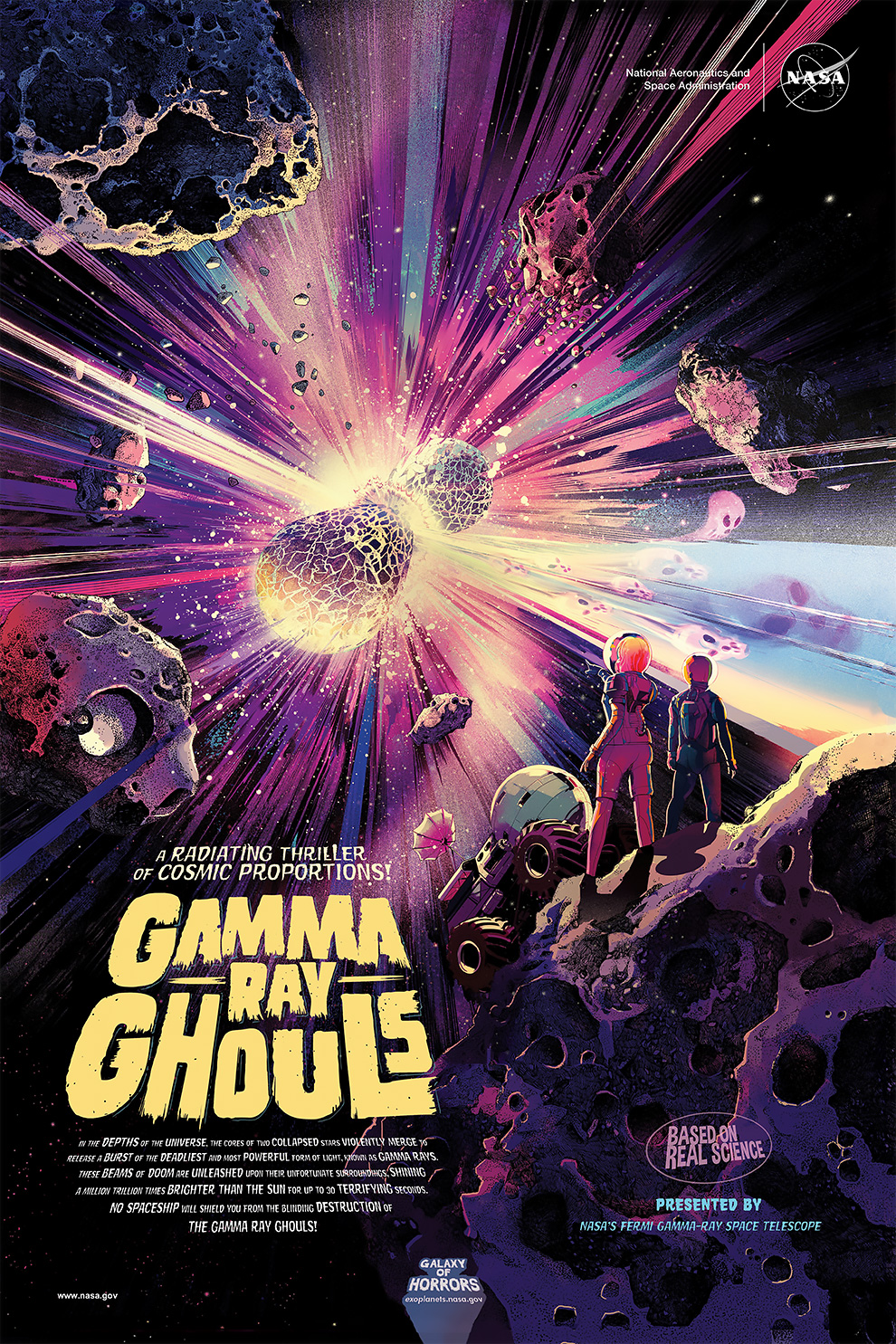 Gamma Ray Ghouls: In the depths of the universe, the cores of two collapsed stars violently merge to release a burst of the deadliest and most powerful form of light, known as gamma rays. These beams of doom are unleashed upon their unfortunate surroundings, shining a million trillion times brighter than the Sun for up to 30 terrifying seconds. No spaceship will shield you from the blinding destruction of the gamma ray ghouls! (NASA-JPL/Caltech) 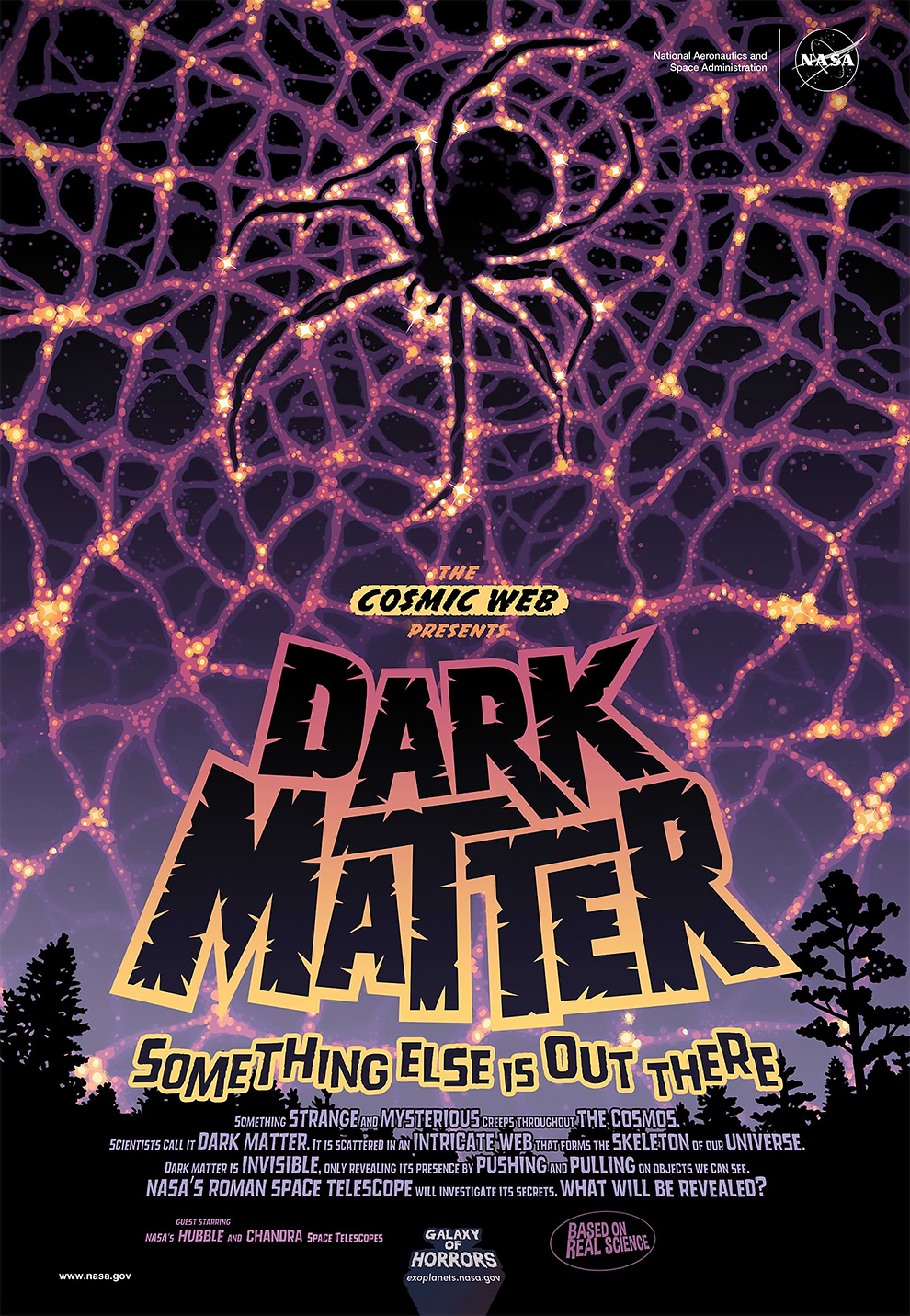 Dark Matter: Something strange and mysterious creeps throughout the cosmos. Scientists call it dark matter. It is scattered in an intricate web that forms the skeleton of our universe. Dark matter is invisible, only revealing its presence by pushing and pulling on objects we can see. NASA’s Roman Space Telescope will investigate its secrets. What will be revealed? (NASA-JPL/Caltech) 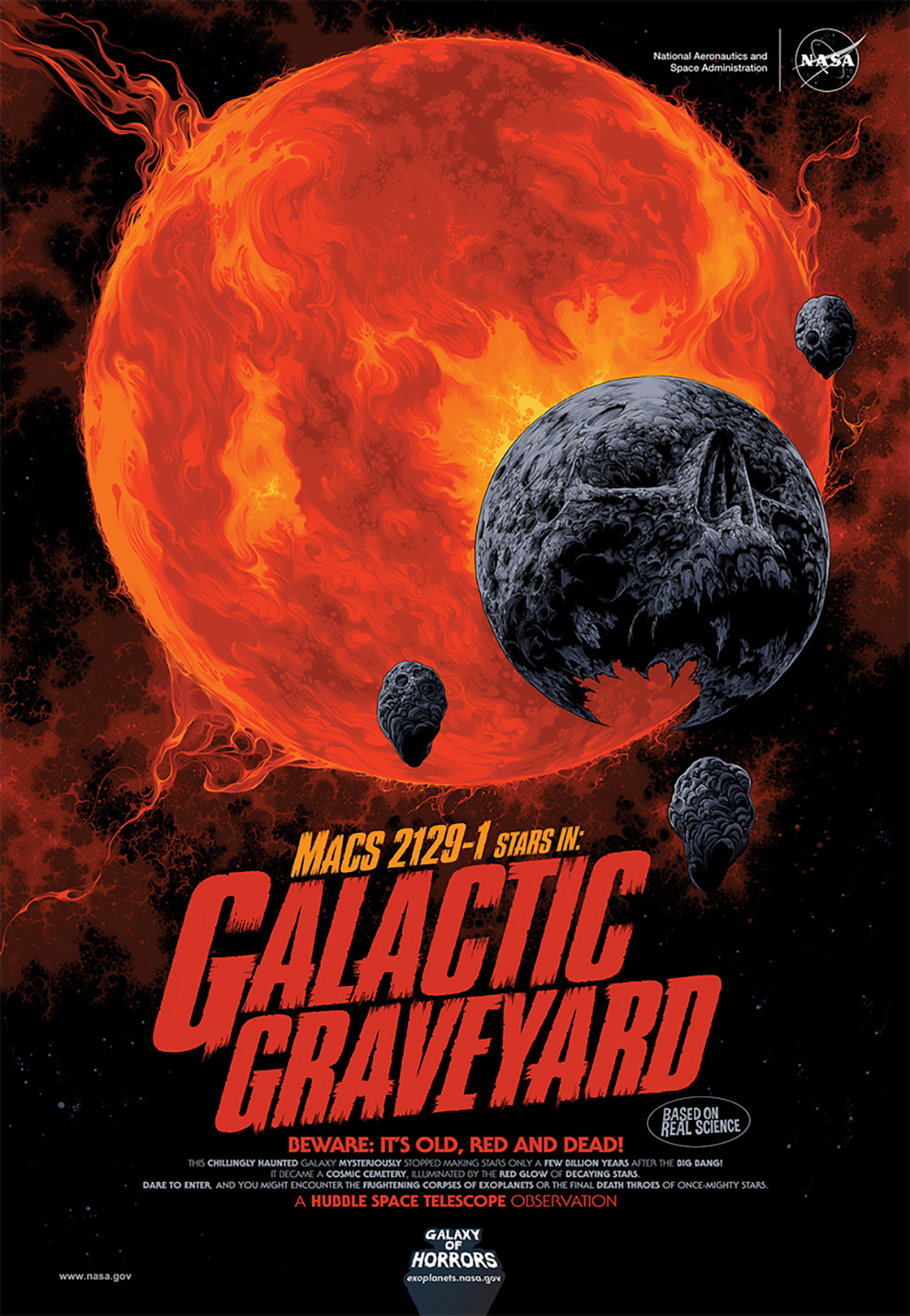 Galactic Graveyard: This chillingly haunted galaxy mysteriously stopped making stars only a few billion years after the Big Bang! It became a cosmic cemetery, illuminated by the red glow of decaying stars. Dare to enter, and you might encounter the frightening corpses of exoplanets or the final death throes of once-mighty stars. (NASA-JPL/Caltech) 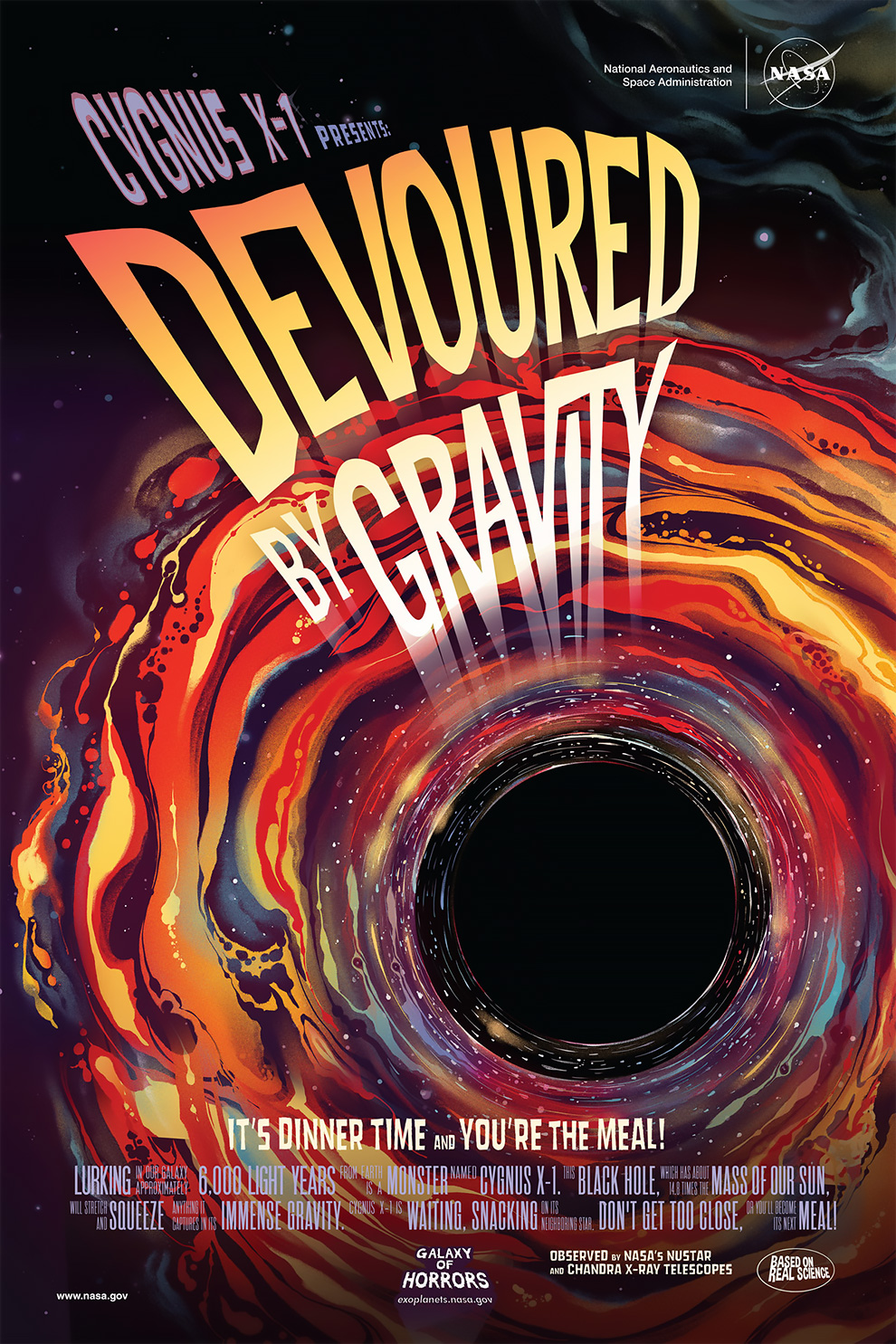 Devoured by Gravity: Cygnus X-1 Presents: It’s Dinner Time and You’re The Meal! Lurking in our galaxy, approximately 6,000 light-years from Earth, is a monster named CygnusX-1. This black hole, which has about 14.8 times the mass of our Sun, will stretch and squeeze anything it captures in its immense gravity. Cygnus X-1 is waiting, snacking on its neighboring star. Don’t get too close, or you’ll become its next meal! Observed by NASA’s NuSTAR and Chandra X-Ray Telescopes. (NASA-JPL/Caltech) 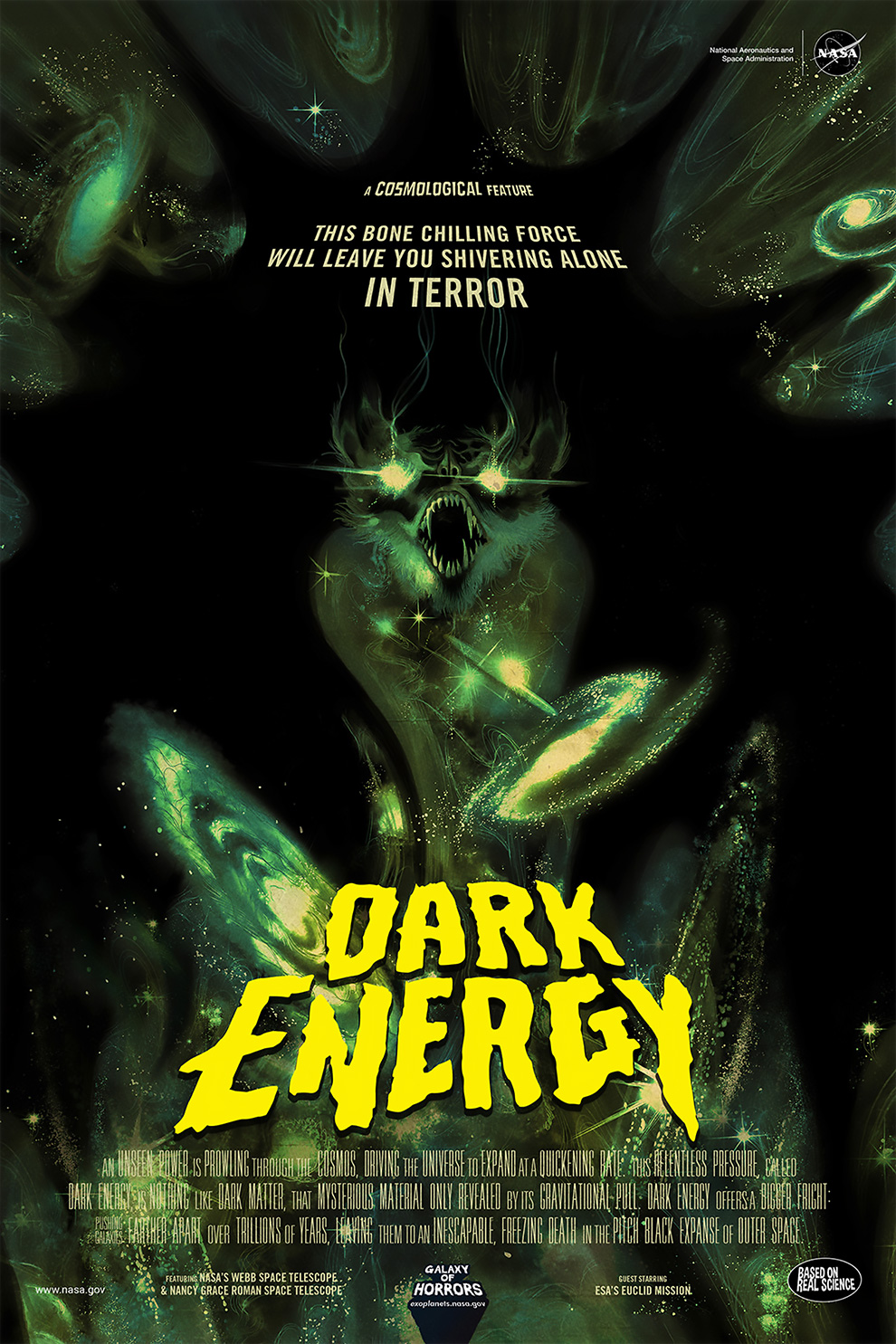 Dark Energy: This bone-chilling force will leave you shivering alone in terror! An unseen power is prowling throughout the cosmos, driving the universe to expand at a quickening rate. This relentless pressure, called dark energy, is nothing like dark matter, that mysterious material only revealed by its gravitational pull. Dark energy offers a bigger fright: pushing galaxies farther apart over trillions of years, leaving the universe to an inescapable, freezing death in the pitch black expanse of outer space.​ (NASA-JPL/Caltech) 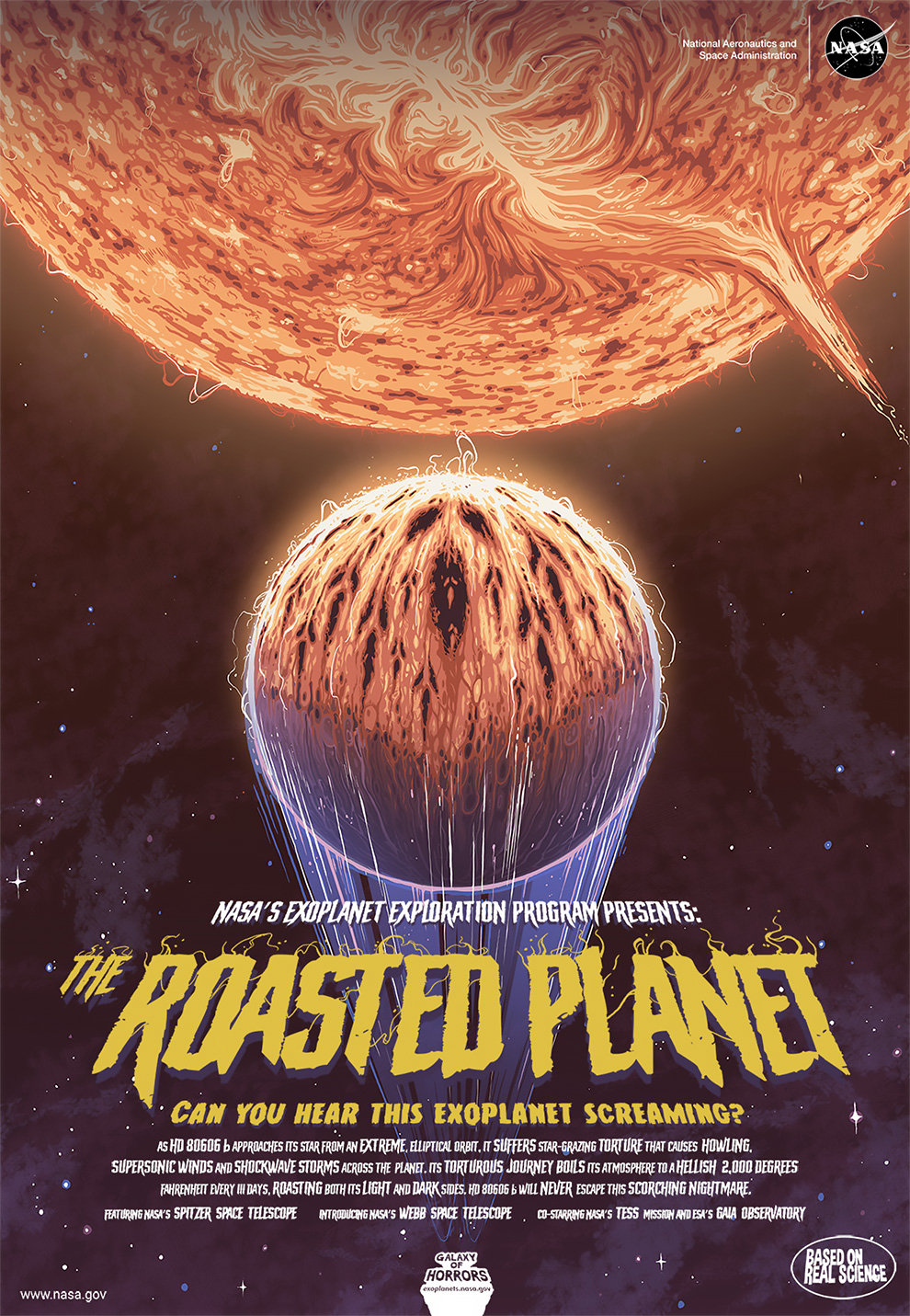 The Roasted Planet: Can you hear this exoplanet screaming? As HD 80606 b approaches its star from an extreme, elliptical orbit, it suffers star-grazing torture that causes howling, supersonic winds and shockwave storms across the planet. Its torturous journey boils its atmosphere to a hellish 2,000 degrees Fahrenheit every 111 days, roasting both its light and dark sides. HD 80606b will never escape this scorching nightmare. (NASA-JPL/Caltech)

New York Over 35 Years Ago – 55 Color Snapshots Show The Most Populous City In The United States In 1980
Teach Yourself to Draw with The Help of The Man Who Influenced Walt Disney, 1913
This Instagram Account Reveals Scenes From Famous Movies With And Without Special Effects
Cool Vintage Photos Capture People Posing With Volkswagens in the 1960s and ’70s
This Young Woman Dresses Like It’s The 19th Century Every Day
Retro Photoshop Tool Bar Enamel Pin: 3" Of Throwback Fun By Maxistentialism
Beautiful Colorized Photos of a Young Queen Elizabeth II From the 1930s and 1940s
When Eight-Year-Olds Worked The Streets: Lewis Hine's Beautiful Vintage Portraits Of Young Workers In America
"Tales from the Graveyard": Glorious Horror Fiction of Guy N. Smith
This Guy Is Trolling His Followers By Drawing Their Avatars In A Funny Way And They Approve Of The Result
Amazing Vintage Photographs of Fountain of Ice on Washington Boulevard in Detroit From the Early 20th Century
Alexander Calder’s Iconic Flying Colors Series for Braniff Airlines in the 1970s
Women Selling Booze: The Ladies Of Vintage Alcohol Advertising
Concepts From Future Past: 1970 Ferrari Modulo 512
"Behind You": One-Picture Horror Stories That We Do Not Recommend Reading Alone
Motivating Posters for Your Startup
Darth Vader and the Underworld: Kevin Cassidy's Brutal and Infernal Demons
The Superb Bizarre Generative Artworks by Ai Ai Capitan
"The Stone Age Techno": Amazing Photographs of the Silver Apples Performing in New York City, 1968
Gorgeous Photos Of Classic Beauties Taken From Between The 1940s And 1960s By Philippe Halsman
This Guy Used AI To Colorize Hollywood Stars Of The Golden Age And Here's What He Got In Only A Few Seconds
Palermo Viejo: Photographer Captured Abandoned Vintage Cars in Italy
14 Immortal Black And White Film Scenes Tastefully Colored By Austrian Artist
Leafy Sea Dragon
halloween, horror, movies, NASA, posters, retro, vintage