“Long Live the Friendship between the Peoples and Armies of China and Soviet Union”. 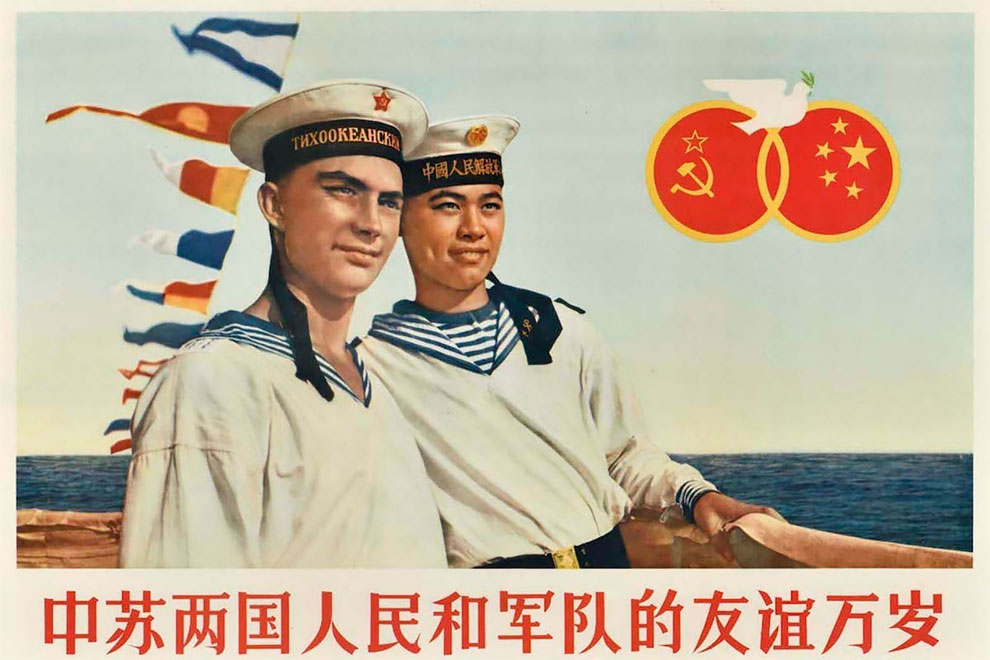 In October 1949, the Chinese Communist Party led by Mao Zedong claimed victory and formed the People’s Republic of China. Socialist regimes now held power across one-fifth of the globe, ruling a combined population of almost 800 million people. Maintaining a friendly and productive relationship between Moscow and Beijing was seen as crucial for the survival and advancement of socialism. 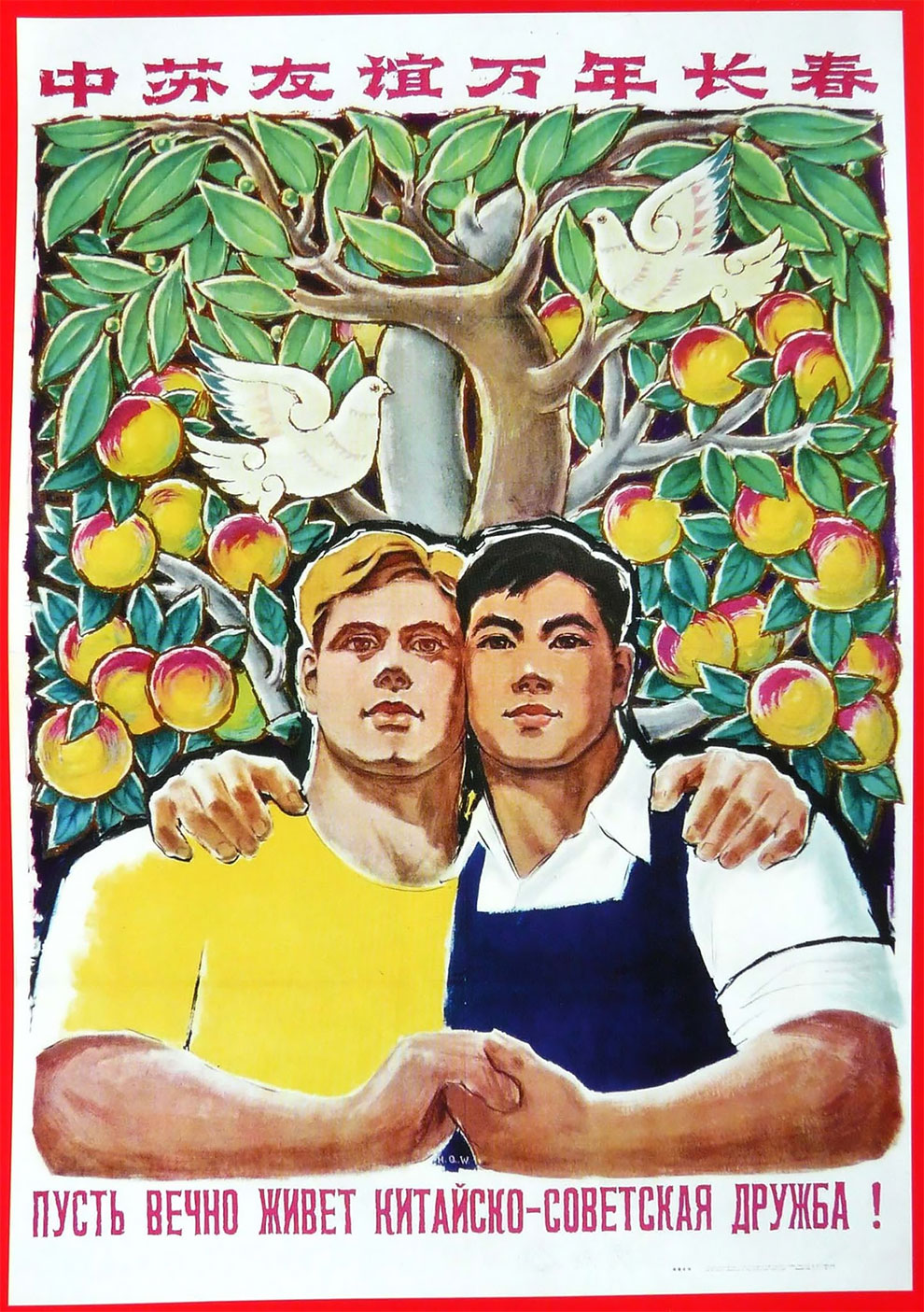 In late 1949, Mao traveled to Moscow to meet Joseph Stalin for the first time. Recognizing the need for unity at a time of growing opposition, Stalin and Mao signed a bilateral treaty called the Treaty of Friendship, Alliance, and Mutual Assistance.

“Always Together!”. (They really look like a happy gay family). 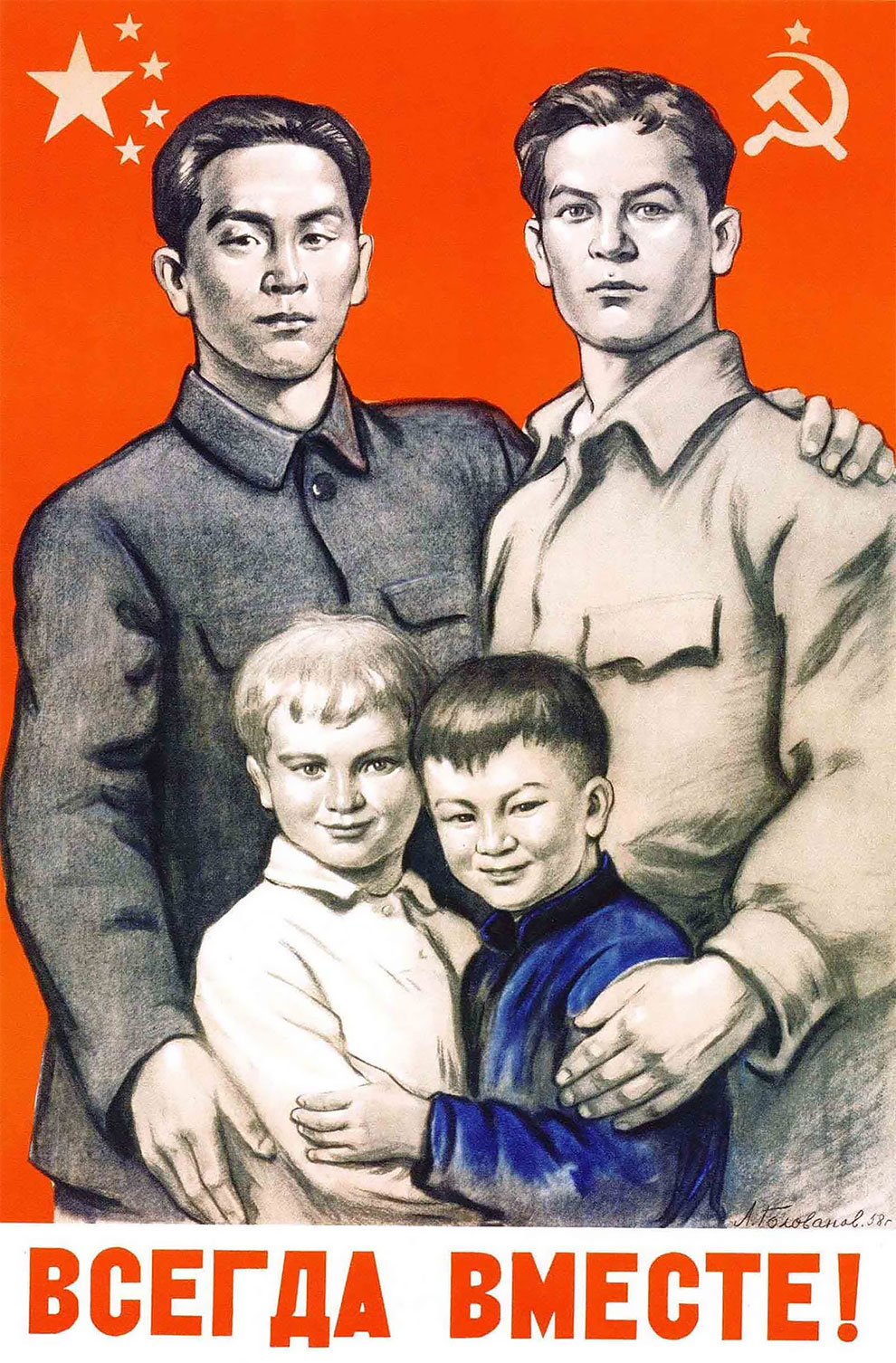 Propaganda posters were an integral part of attesting to the world the close relationship between China and the Soviet Union and as seen from this photographic collection they walk hand-in-hand, kissing, clutching each other, all happy and gay, so to speak. These homoerotic Chinese-Soviet communist propaganda posters look more like a gay couple’s vacation pics, or maybe an ad for interracial gay marriage.

“The friendship between the Chinese and Soviet people will last forever”. 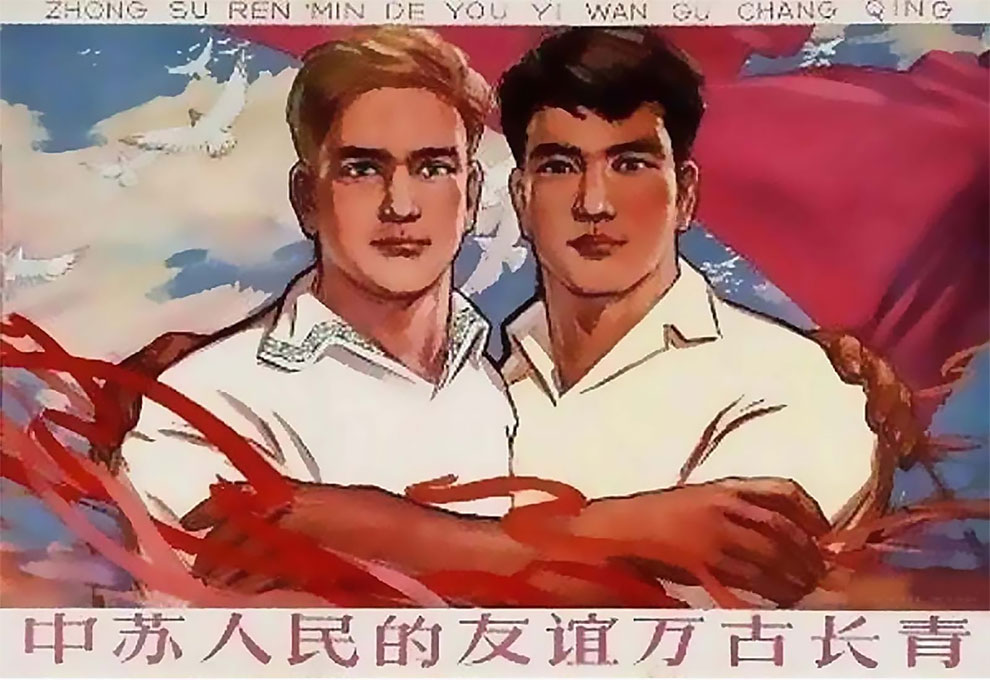 The designers of these posters didn’t realize how homoerotic they were and later on, many scholars have pointed out the overt homoeroticism present in these images. The depictions range from sweet—two men offering each other flowers— to totally inappropriate such as men representing China and the Soviet Union kissing, holding hands, passionately embracing each other, etc. 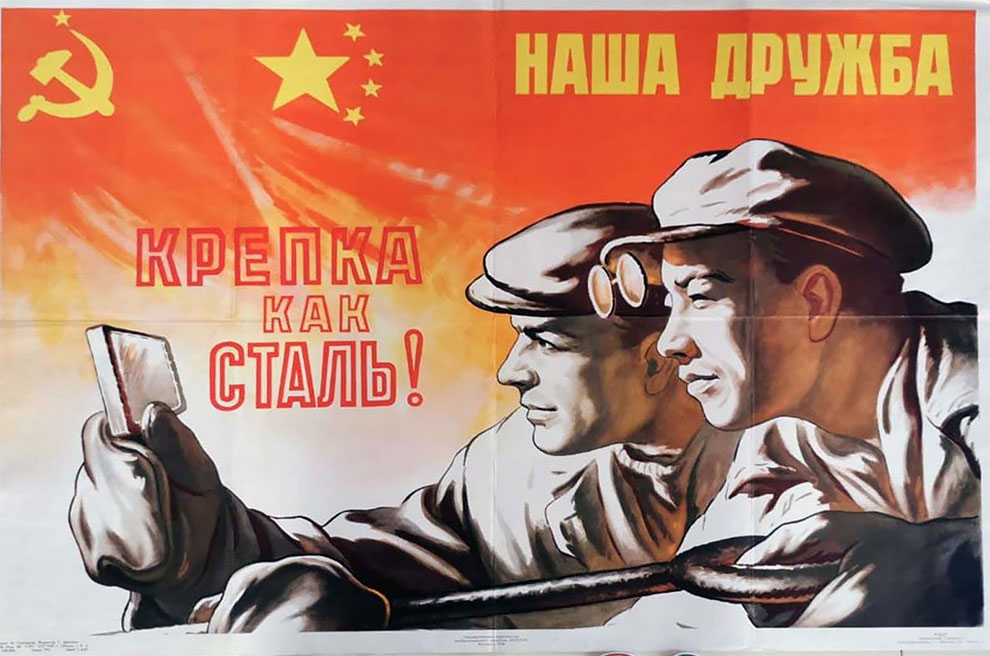 Scholars think that there is little evidence that the artists intentionally portrayed homosexuality in these images. Most likely the artists were tunnel-visioned on convincing people within the Soviet Union and China that cooperation and closeness were essential to survival and strengthening global socialism. 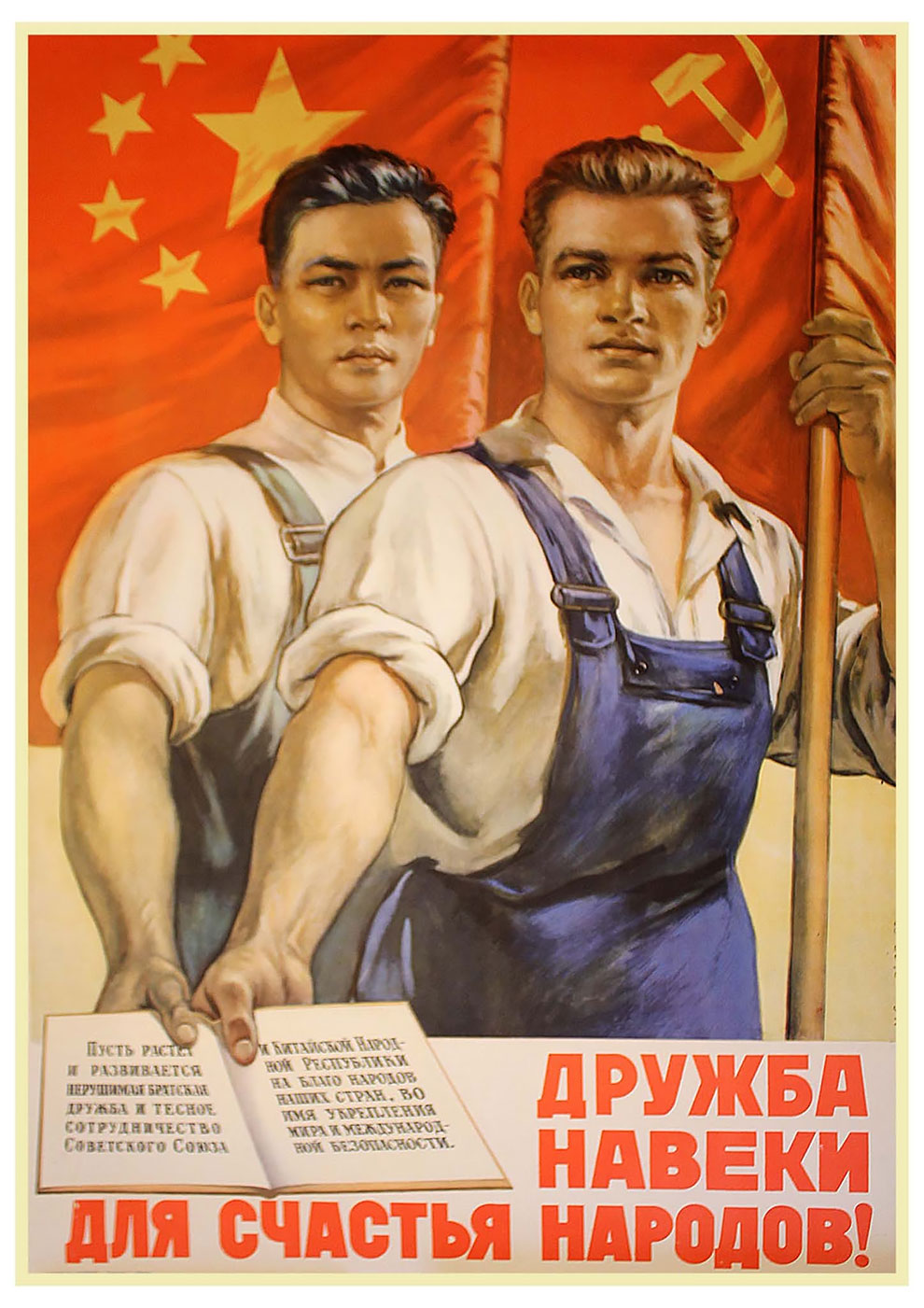 China and the Soviet Union were both rather homophobic societies. Communist leaders and intellectuals took many different positions on LGBT rights issues. Karl Marx and Friedrich Engels said very little on the subject in their published works. Marx in particular commented rarely on sexuality in general. 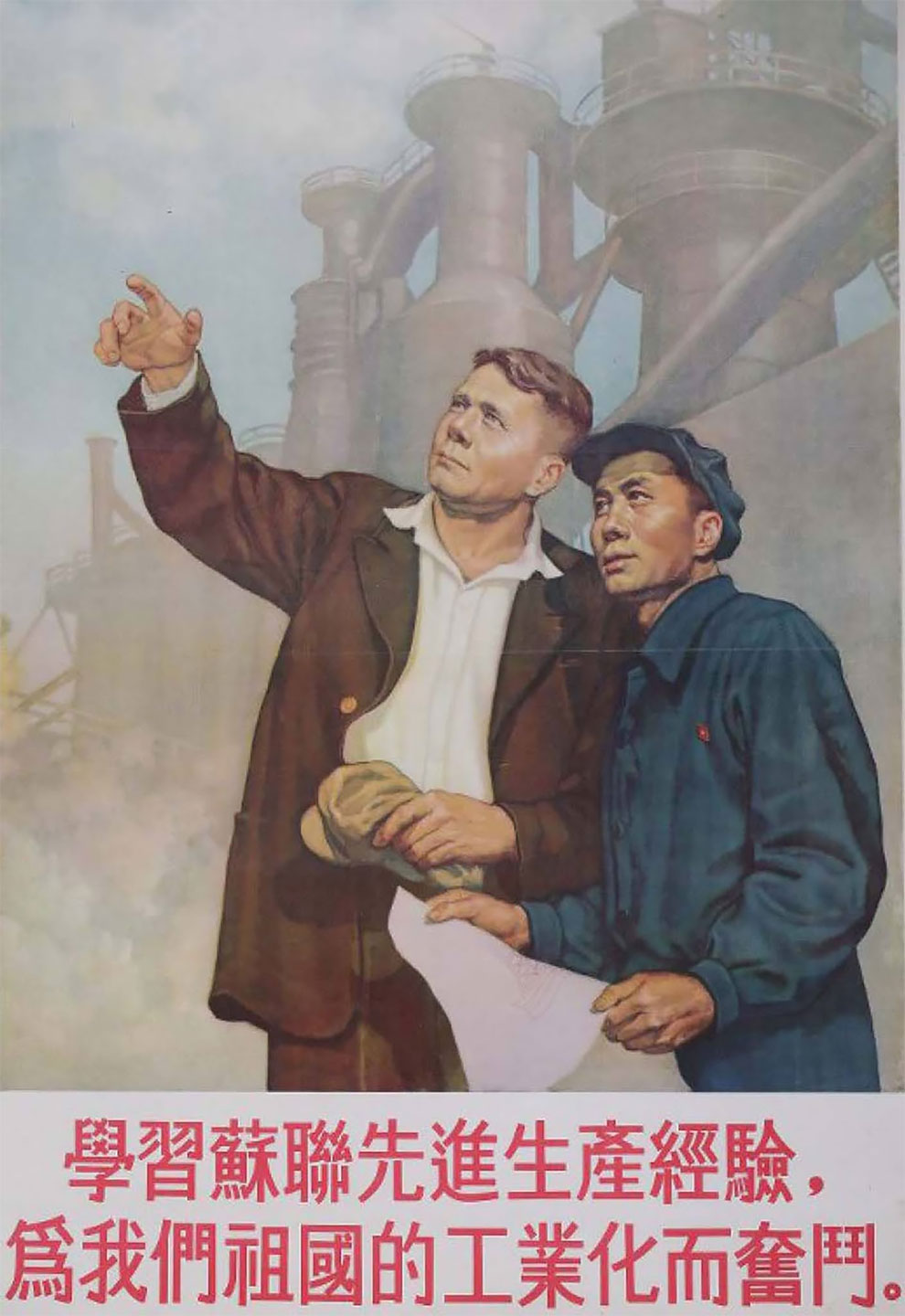 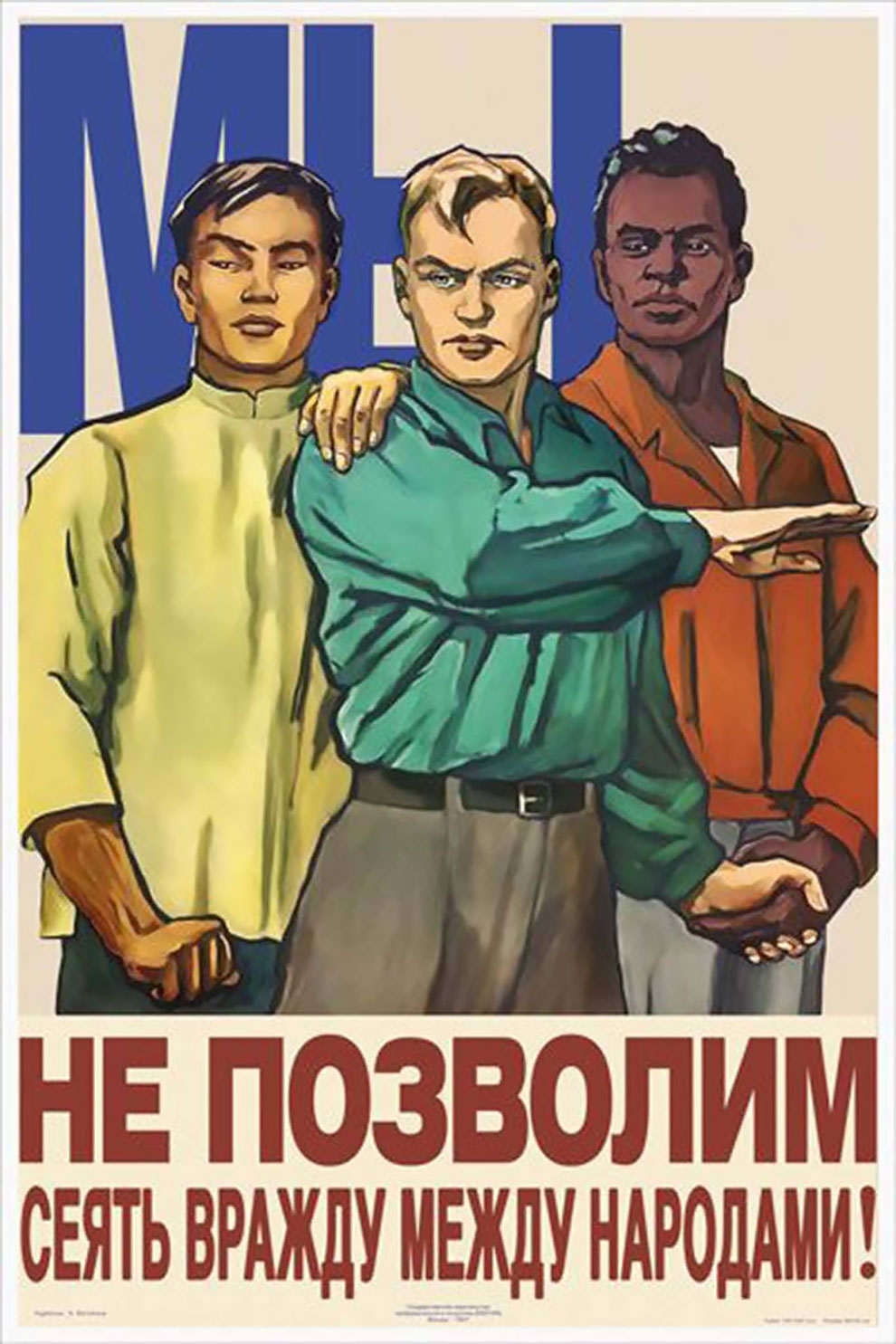 Not a Chinese-Soviet poster, interesting nevertheless. Poster on the construction of the Aswan Dam in Egypt, which was built with the help of the USSR. 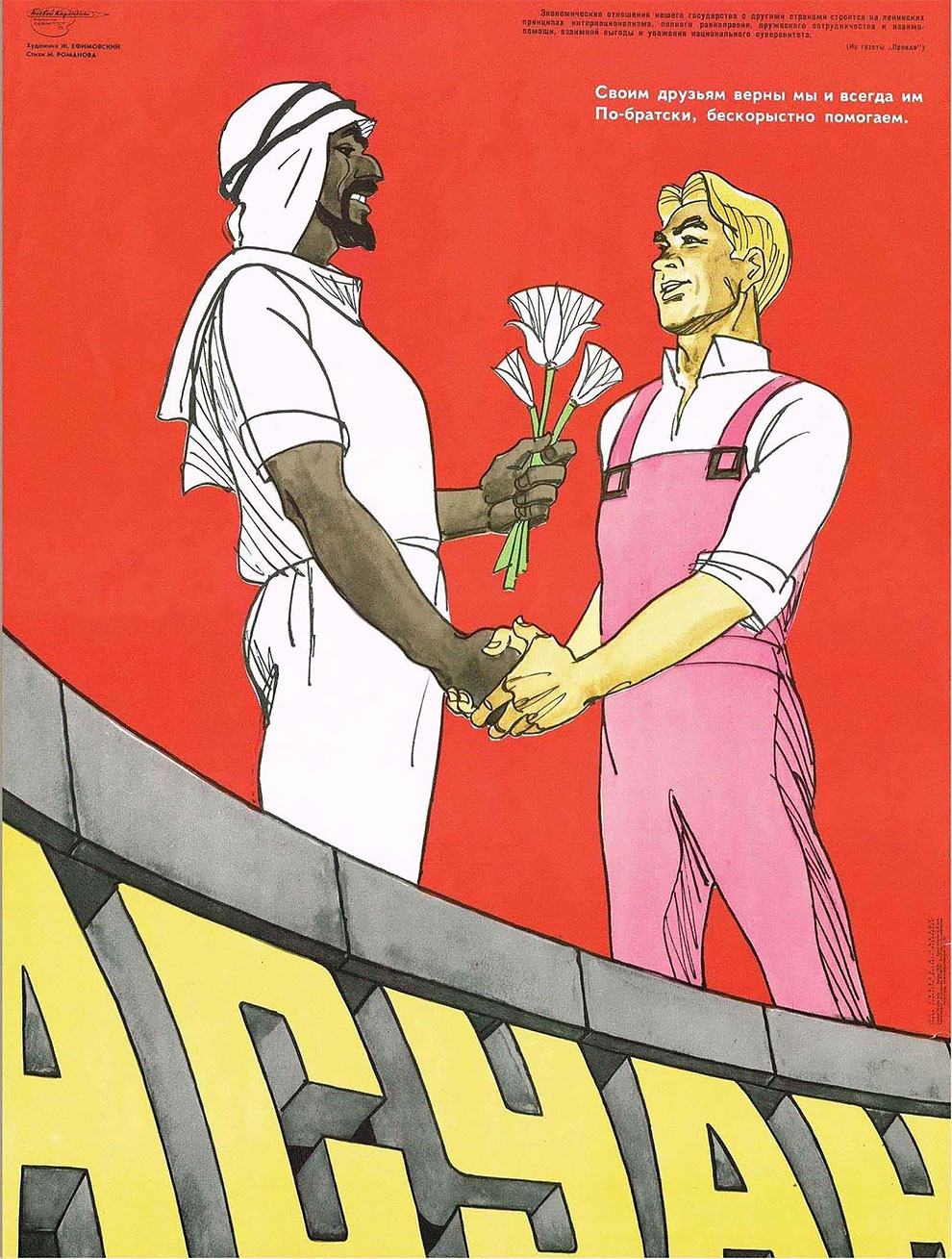 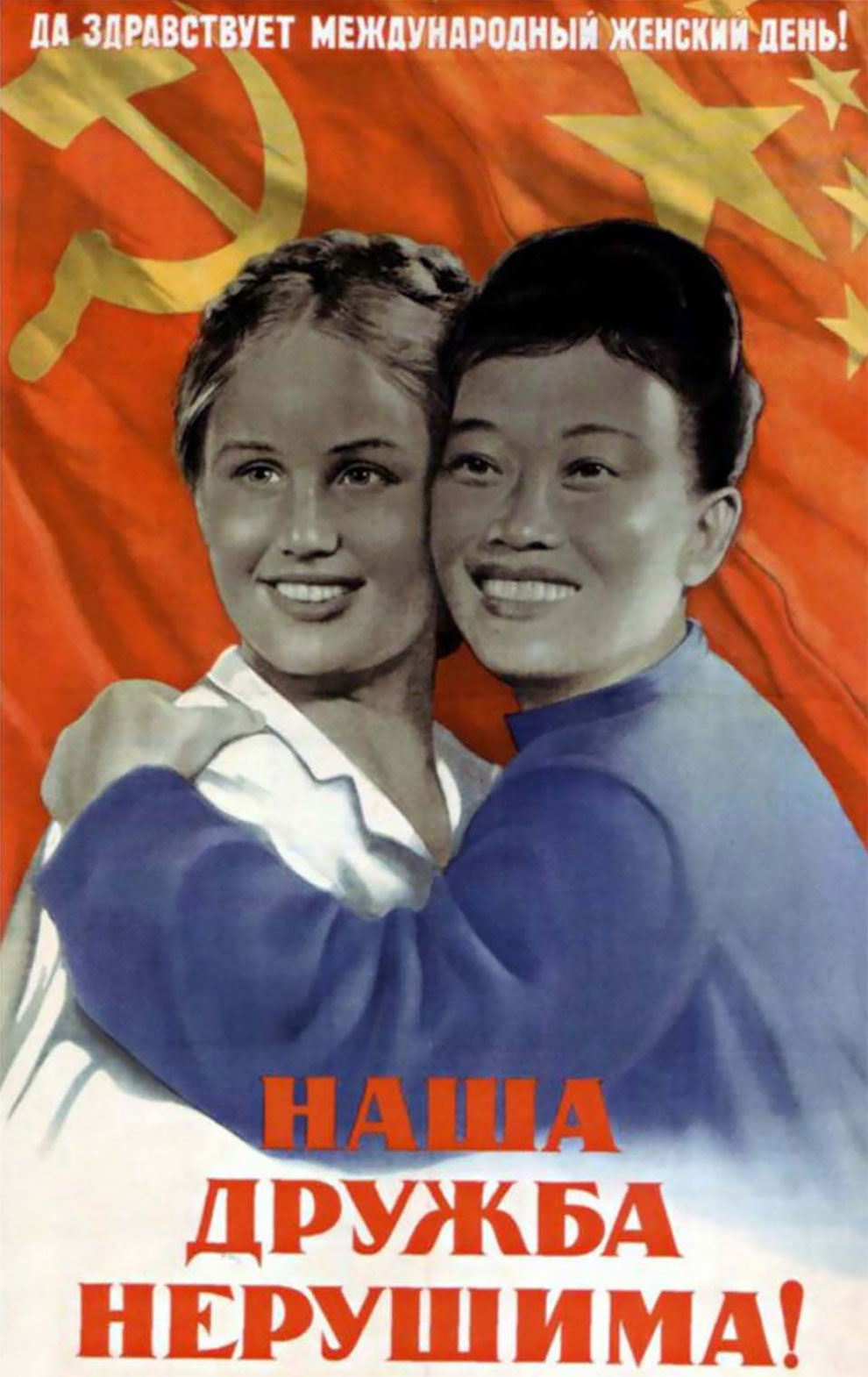 “We strengthen our Friendship in the name of Peace and Happiness”. 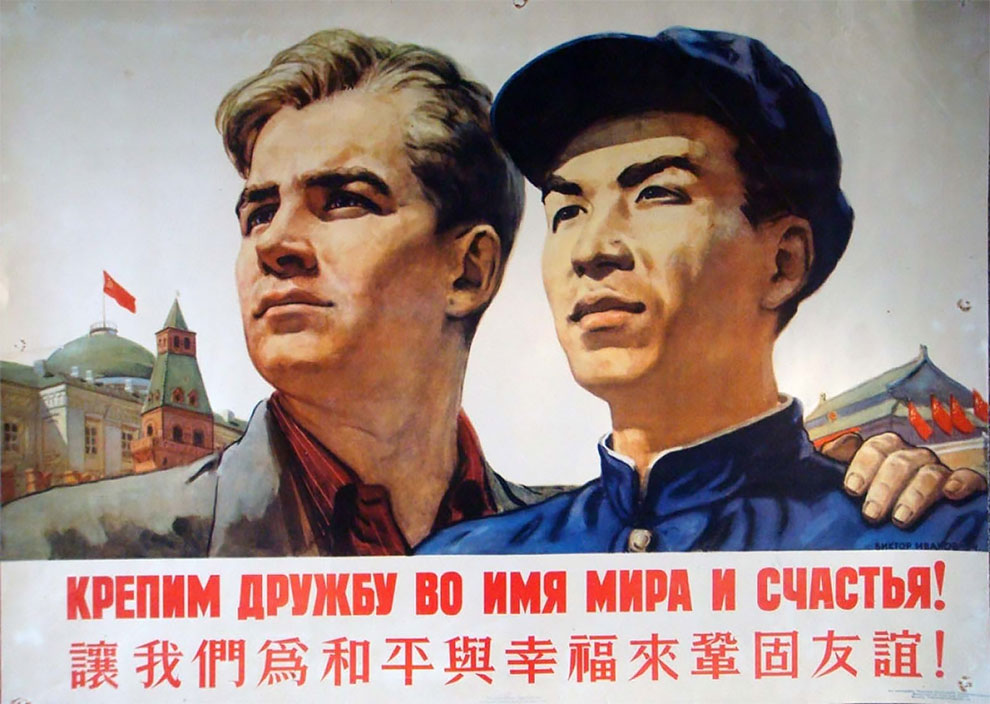 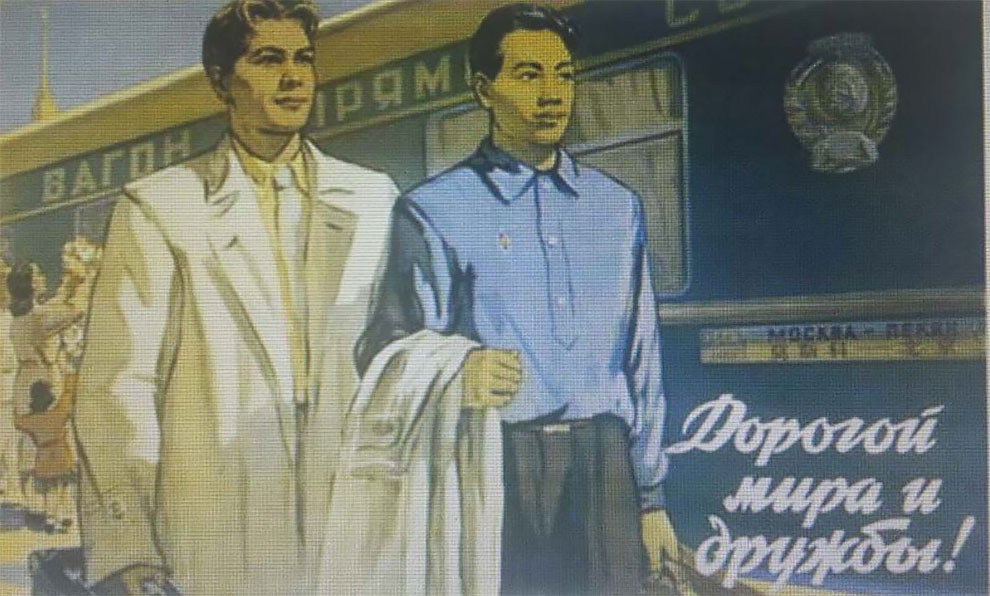 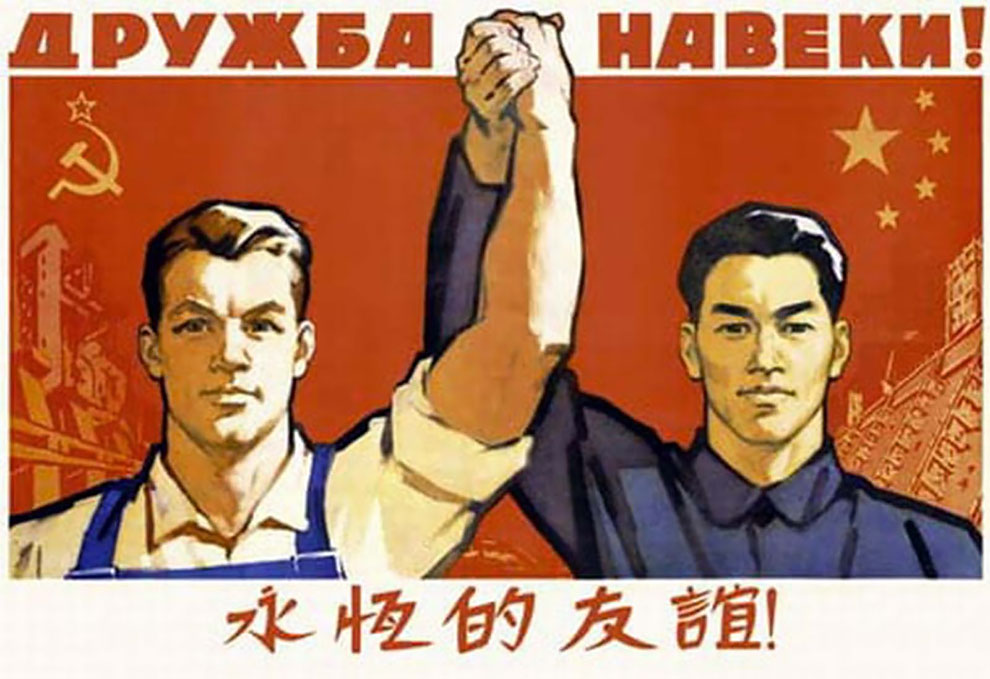 The couple that welds together… 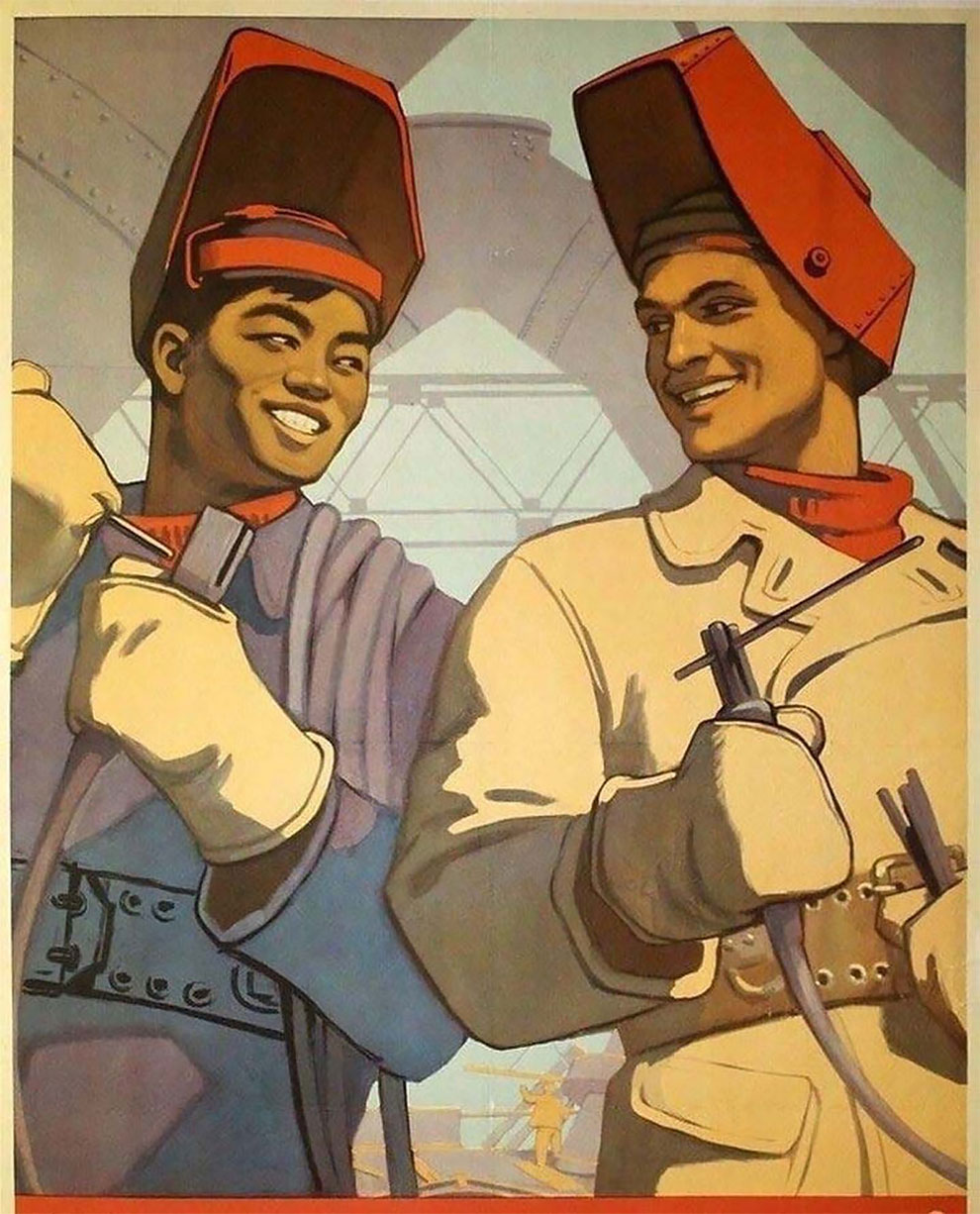 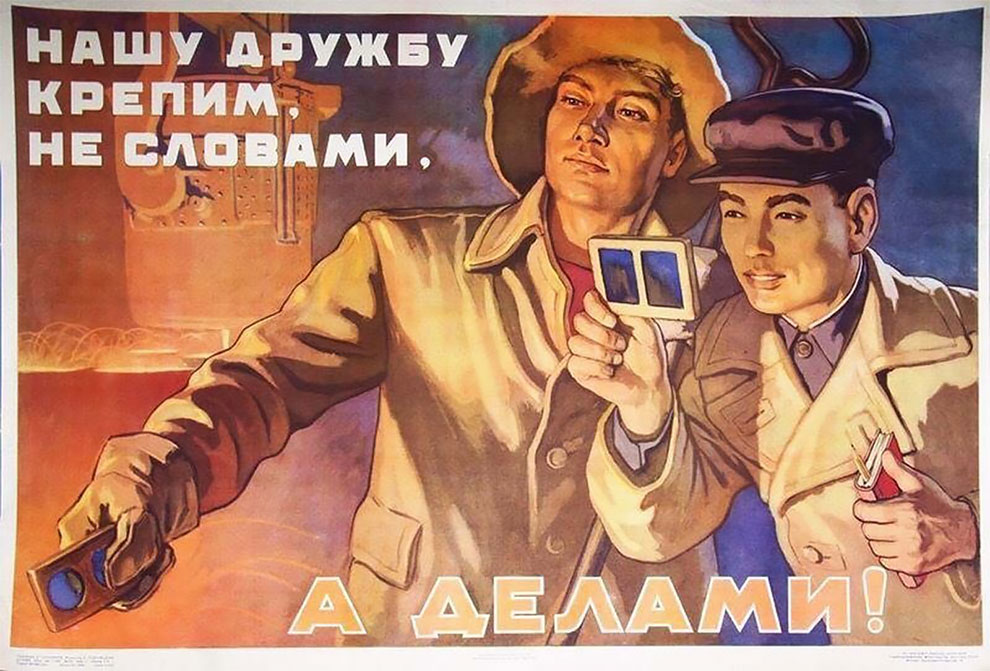 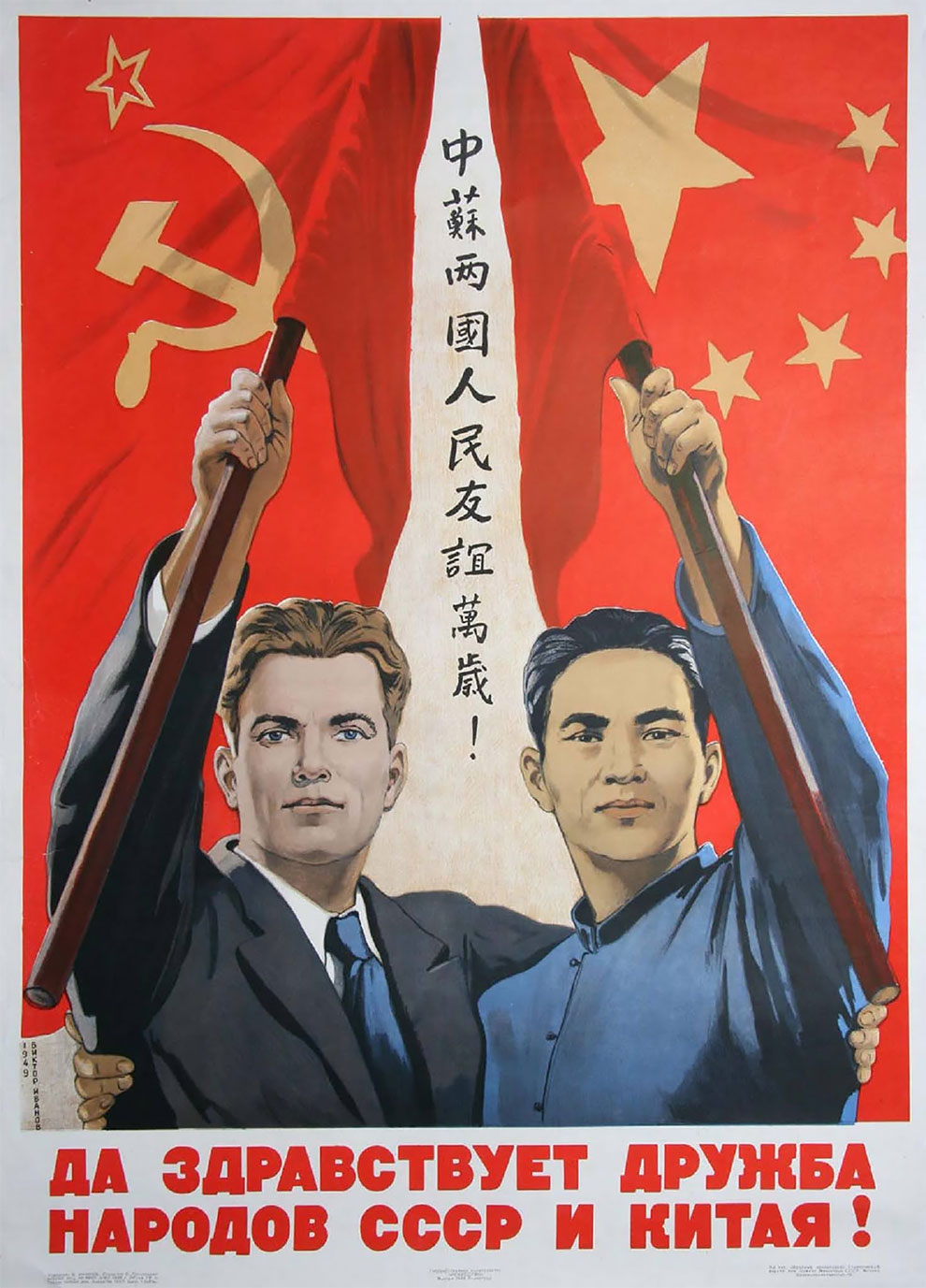 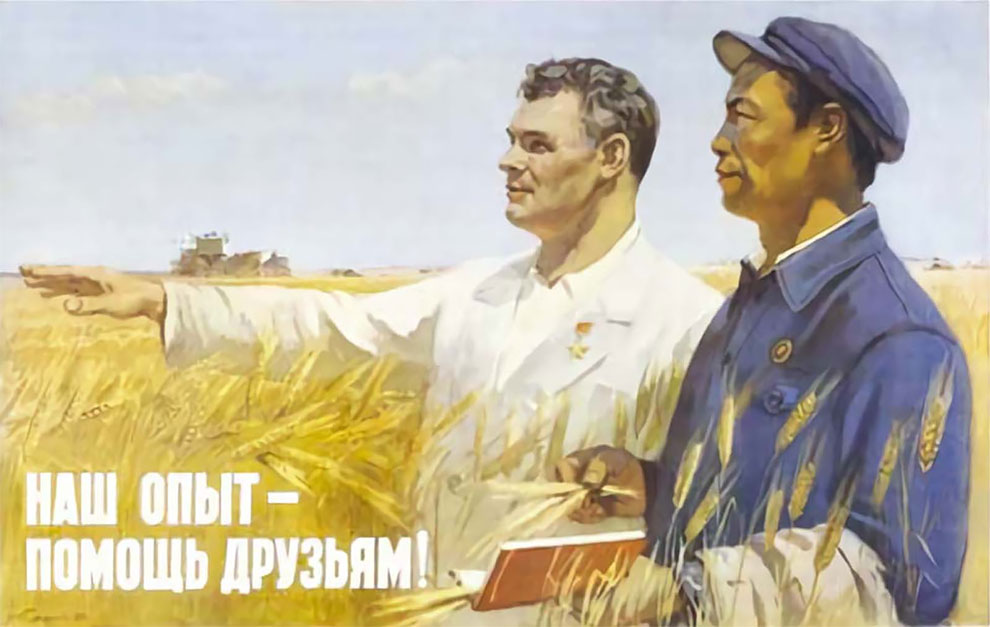 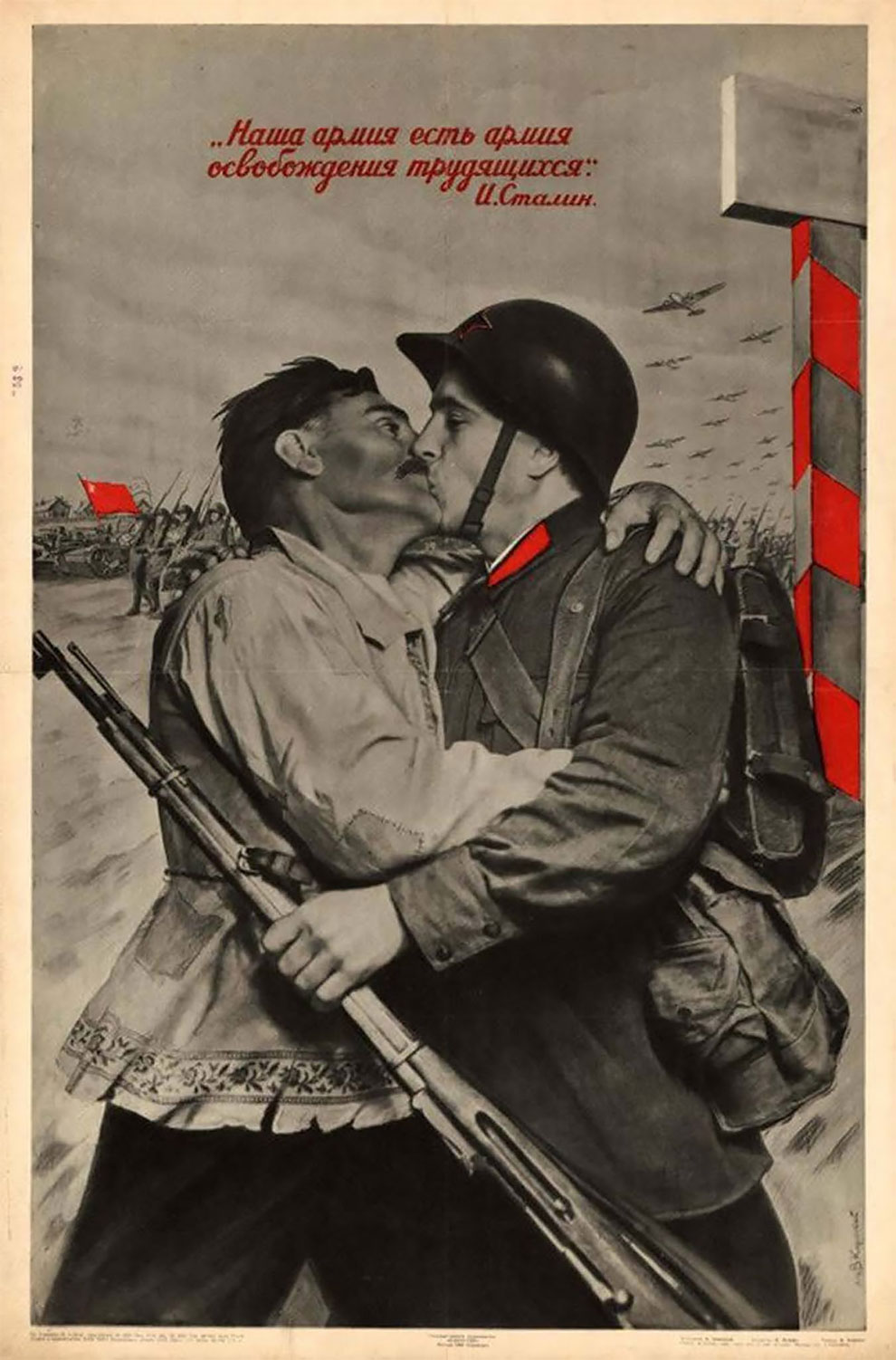 12 Pictures That Anyone Who’s Been Pregnant Will Understand Perfectly
Japanese Guy Absolutely Nails Anime Girl Cosplay, from Evangelion to Sailor Moon
Taste Of Insanity: Mindblowing Digital Artworks By Pierre-Alain D
"As The Circle Fades": The Superb Book Illustrations By Antonio Caparo
Richard Saunders Creates Giant Bushes In The Shape Of His Deceased Cat
Keep Your Smartphone Charged with The PowerBar
A Japanese Artist Created Astonishing 3-Dimensional Sculpture Of The Sirene
American Woman Celebrated Getting A Job With A Romantic Photoshoot
Swarms Of Hybrid Creatures Flow Like Liquid On Walls And Buildings By Pantónio
Leroy Merlin's Preparation of a Banknotes
Recognizable Characters Recreated By A Korean Artist In Her Own Style
Graphic Designer Uses Gigantic Billboard To Propose To Girlfriend – And Asks For Answer By Text
Jack London’s Extraordinary Photos of London’s East End in 1902
Rio Olympics 2016 Team GB Athletes Strip Off For Campaign To Encourage Schoolgirls To Take Up Exercise
'25 Things I’ve Learned' - Artist Writes 25 Inspiring Advices
Tango's Newest Comics to Browse, Enjoy, and Relate To, Given His Not-So-Subtle References to The Unfortunate Year of 2020
Frederic Edwin Church’s Beautiful Pantings of Icebergs Between Labrador and Greenland, 1859 – 1861
Unicorn Being A Jerk
"Sketching New Worlds": Superb Digital Concept Art By Steve Chinhsuan Wang
Royal Princess Charlotte Casiraghi’s 'Forever Now' Campaign for Gucci
To Warn On Ecological Disaster, French Artist Prefers To Have The Message Carried By Disney Characters
Beautiful Colorized Photos of Helsinki, Finland in the 1930s
A Comic Book Classic and Master of Abstraction: Illustrations by Bill Sienkiewicz
Self-Taught Artist Turns Dead Cockroaches Into Painted Works of Art
china, communism, homoerotic, posters, propaganda, retro, soviet