Inside the Abandoned Belgium Mansion with the Urban Explorer Andre Govia

The beds are made up, but this abandoned mansion has not had an occupant sleeping in its grand rooms for years. The tenants at the Round Mansion in western Belgium are long gone, but the bedrooms are still occupied by expensive furniture and ornaments. These serie photographs were captured by London urban explorer Andre Govia, after he decided to start documenting his love of abandoned buildings. 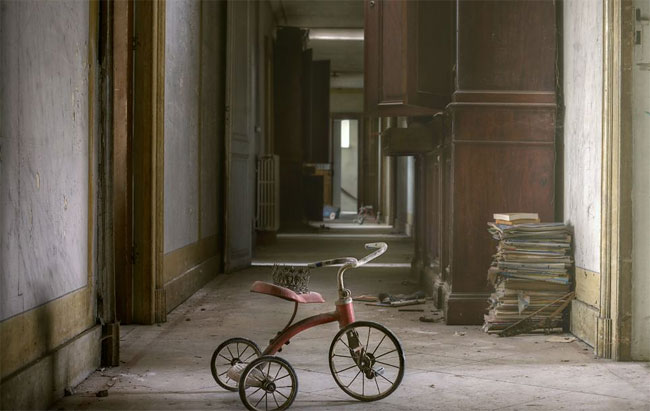 With an abandoned tricycle sitting in an empty corridor, this derelict but once grand mansion could be the setting for The Shining. 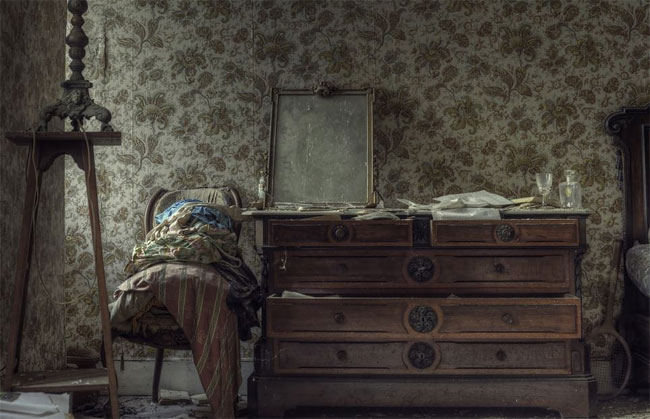 Piles of clothes lie abandoned on a chair in one of the many bedrooms alongside papers and even a wine glass. 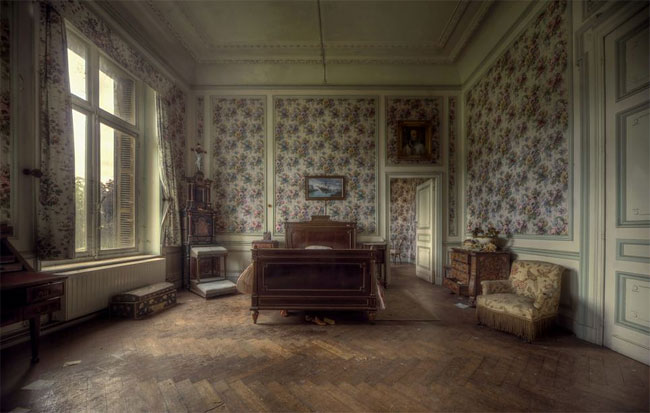 The bedrooms looks like the occupants have just left, but tell-tale signs of decay and dust suggest another story. 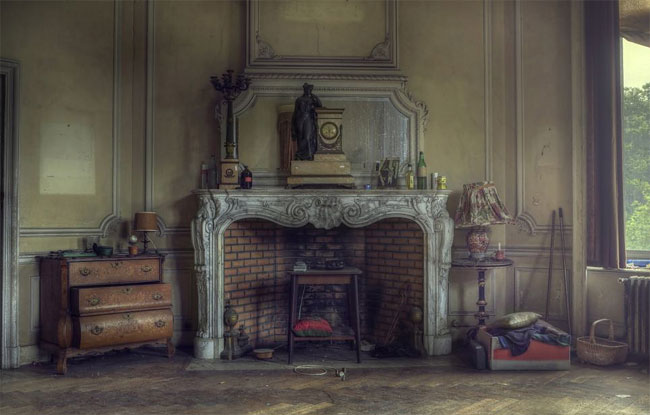 Mr Govia explains: ‘When people see these photographs they think that it’s a waste of a building and history. I like this reaction as I always try to capture the ambiance and textures of the location so people can feel what it’s like inside’ 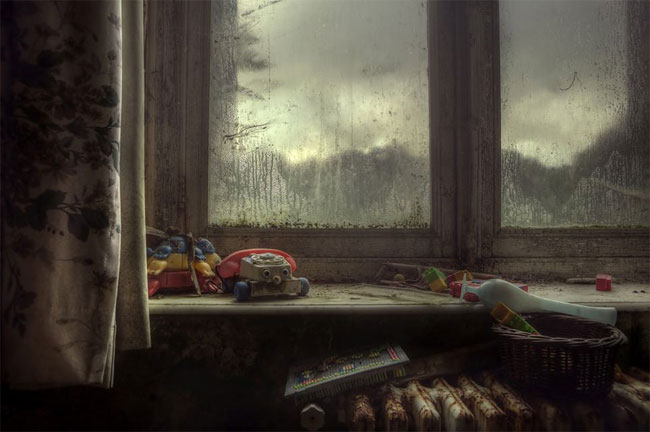 ‘The most interesting part for me was the sheer size of the mansion. I couldn’t believe the nine bedrooms and large rooms were used by just the one family who lived here,’ said Mr Govia. 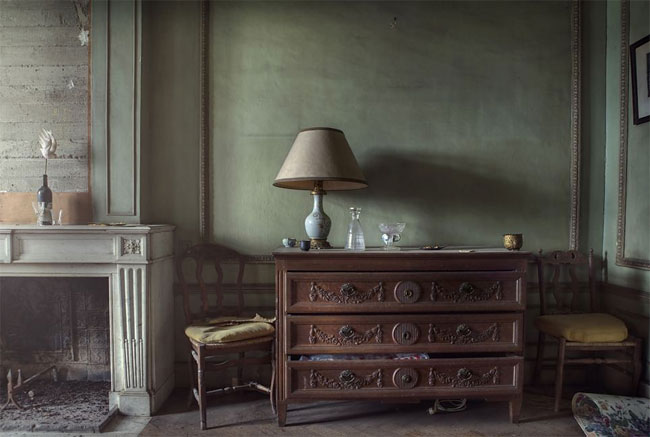 ‘This mansion was an amazing place to visit,’ said Mr Govia. ‘It was very cold and creepy, heavy damp air and noises from the wind made it seem so chilling’ 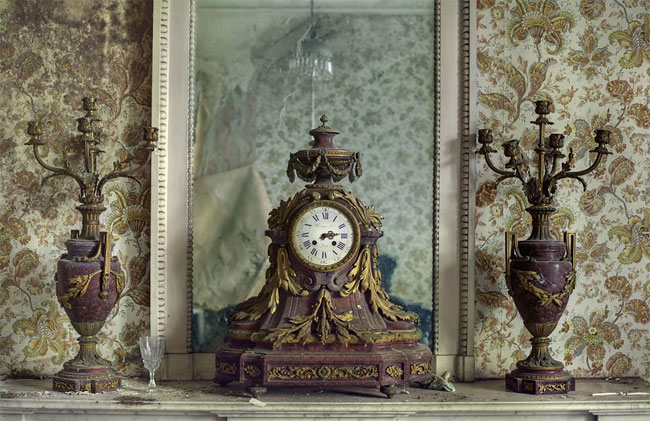 These eerie photographs were captured by London urban explorer Andre Govia, 37, after he decided to start documenting his love of abandoned buildings. 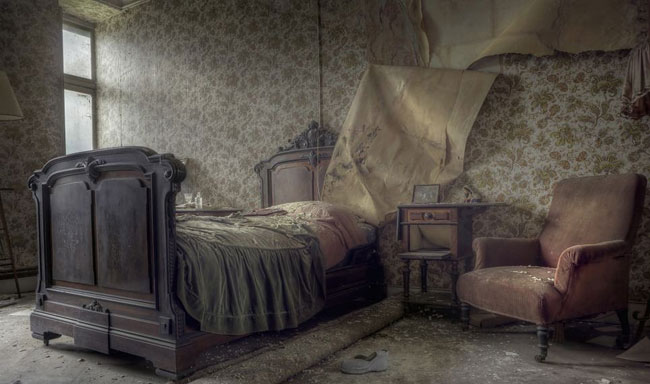 Peeling wallpaper and dusty debris on the furniture shows the extent of the decay to the grand house. 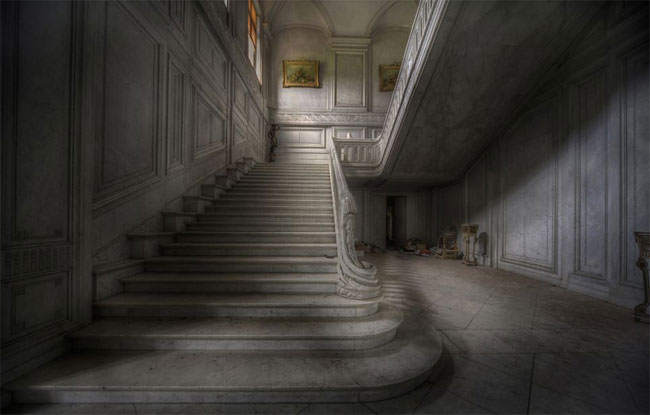 A once grand staircase now stands alone in the beautiful abandoned mansion. 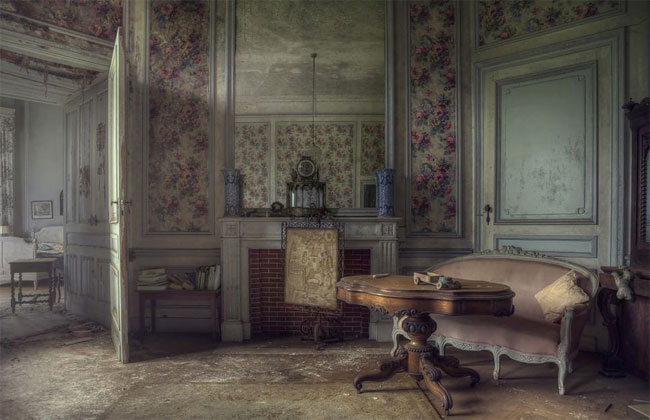 With everything from worn slippers to books and old clothes, this old mansion has apparently lay abandoned since the early 1990s. 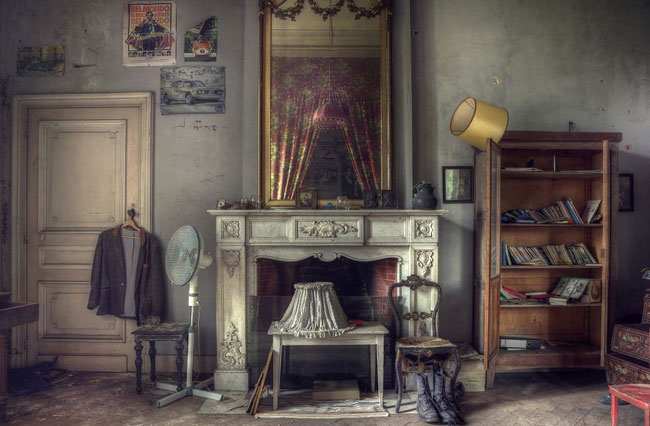 The tenants at the Round Mansion in west Belgium are long gone, but the bedrooms are still occupied by expensive furniture and ornaments.

Via The Daily Mail.

1968: Elton John's First Photo Shoot
Fascinating Vintage Photographs of Dutch Men In Traditional Volendam Worker Pants
An Aerial Tour Of An Abandoned Chinese Fishing Village By Joe Nafis
There’s An Old Abandoned Theme Park Near Tokyo, And It’s Creepy As Hell
An Astronaut Captured Breathtaking Photos of the Southern Lights Under a Full Moon
The Washington Post Travel Photo Contest: Animal Photos
Men-Ups! Men Photographed In Stereotypical Pin-Up Poses
"Orcs Of New York" Is The Brilliant Facebook Parody You Need To Be Following
Photographer Anto Magzan Captured The Aftermath Of The Strong Earthquake In Zagreb
Miniature Absurdist Scenes With A Darkly Satirical Twist By Frank Kunert
Man Develops 120-Year-Old Photos Of Cats Discovered Inside A Time Capsule
Russian Nerd Party Goes Wild In Photographs By Tanya Zommer
Australian Photographer Put A Giant Mirror In A Salt Flat
Strange And Surreal Abandoned Places From Above By Kosmaj Project
A Century of Gorgeous Portraits from The Photographers 2015
This Photographer Spent 10 Years Recording The Post-Soviet Discos Of Lithuania
2016 Washington Post Travel Photo Contest
Great Portraits Of Ireland And The Irish At The Turn Of The 19th Century
Discover The Abandoned Orient Express Train In Belgium
Asia From Above: Breathtaking Drone Photography By Kosuke Kurata
The Final Selection Of Entries From The National Geographic 2015 Photo Contest
Beautiful Winning Photos From The GDT Nature Photographer Of The Year 2020
This Archaeology Soap Has Hidden Dinosaurs Inside
2 New and Awesome Wall Decal Collections from PIXERS
abandoned, belgium, explorer, inside, mansion, urban

Photo of the Day: Jenny From The Block
Serbian Photographer Creates Beautiful Scenes Of ‘Slavic Mythology’ Tales That Will Blow You Away
Parked Cars Under Streetlamps In 1970s New York City
Men-Ups! Men Photographed In Stereotypical Pin-Up Poses
An Artist Puts Our Modern World’s Problems On A Plate, Literally
10 Top And Beautiful Photos Of ViewSonic ColorPro Awards
Vlada Roslyakova by Nagi Sakai for Tush #26
A Look Back At Cannes Film Festival
Photographer Audun Rikardsen Captures Magnificent Whales On The Arctic Side Of The World
Gisele Bundchen for Vogue Brazil, July 2012
2007 ‒ 2022 by Design You Trust. Proudly hosted by WebHostingBuzz.
Privacy Policy · Terms of Service · Content Removal Policy ❤️ 🇺🇦