Winners Of The Visual Storytelling Contest By The Independent Photographer

Here are the winners and finalists of The Visual Storytelling Contest By The Independent Photographer.

“From classic social documentary to imaginative storytelling: The art of visual storytelling encompasses a wide range of possibilities with at its heart, the will to tell a story and we were seeking visual artists aiming to captivate and share their stories with awareness and conviction.”

American photographer Nichole Sobecki, represented by renowned photo agency VII, was the judge of the competition. 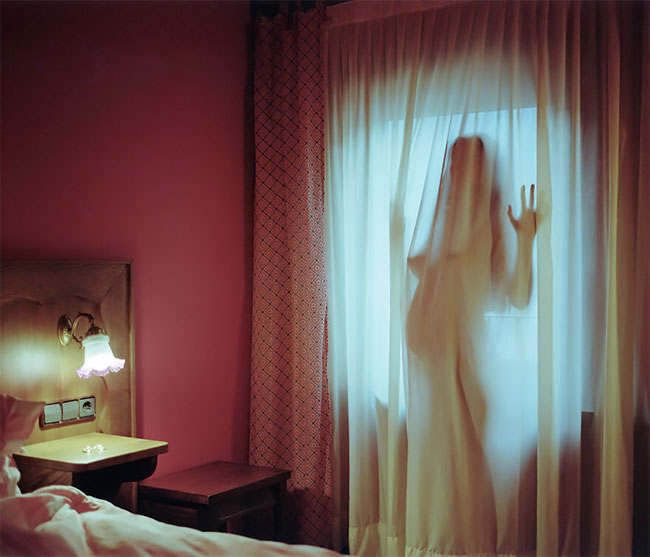 “The growing body. The excitement. Noticing the old me fading away, the beginning of a new life. The fear of losing him again, the mental scars after the miscarriage. The first strong kicks, slowly regaining trust in my body. The growing love. The healing homebirth. Meeting the soul that had been with us already all those years, finally earth side. The double sword: fatigue, heartbreaking fears, overwhelming responsibilities alternated with a soft inner peace, overpowering happiness.”

Feedback from Nichole Sobecki: “The shrouded body reminds us of the profound transition into motherhood, but also of that thin veil between life and death, the woman you are before and the woman you become. As an emotional landscape, it reveals the complexity of an often-caricatured experience: the anticipation, the hope, and the terror. The pregnant female form has been depicted countless times, yet this reimagining feels personal, honest, and brave.” 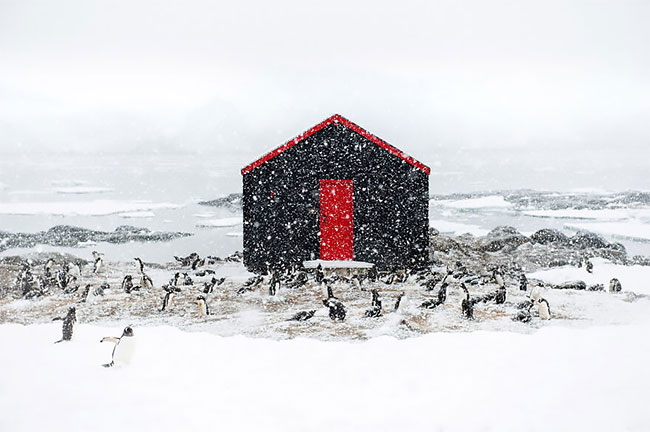 “Huts, research stations, shelters, monuments, or maritime landmarks: human constructions in the Antarctic Peninsula are a benchmark for a world that the imagination still thinks of as immaculate. Landmarks might be sensed here as pre-ruins, next to vestiges, nearly to be sculptures. The human presence looks incongruous in these remote areas. Fine and colored geometries lost in white stretches that we imagine extending to infinity. In contrast with the constructions of native people, the constructions of conquest are here scientific, industrial. Almost cosmonaut: humans on another planet. From “Polaris Artefacts” series.”

Feedback from Nichole Sobecki: “The lone shed sits, vibrant against the subdued tonality of this land and its waddle of penguins. Too often the Arctics are portrayed as desolate, untouched places, far removed from the concerns of mankind (or any meaningful sense of responsibility). Here, the photographer has elegantly challenged that view. To truly bring ourselves into harmony with the natural world, we must return to seeing humanity as a part of it.” 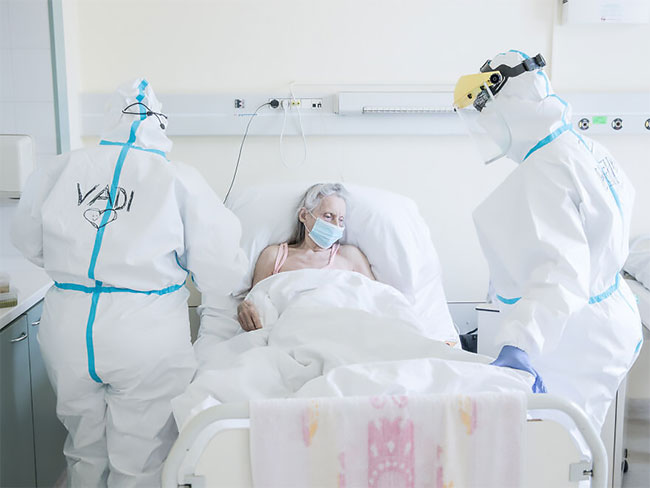 “Medical workers wearing personal protective equipment take care of a Covid-19 positive patient at the Uzsoki Hospital, Budapest, Hungary. Hungary has an exceptionally high mortality rate compared even to the most highly infected countries. Since the outbreak of coronavirus in Hungary, the fatality rate had shown a rising trend then started to decrease at the beginning of July. As of December 18, 2020, the death rate due to the virus reached 2.61 percent in the country.”

Feedback from The Independent Photographer Editors: “Simon Móricz-Sabján’s thoroughly arresting and impeccably framed image brilliantly demonstrates the medium’s communicative capabilities. Strikingly forthright, yet imbued with a surreal quality, it imparts the essence of the scene perfectly, yet simultaneously resonates far beyond the sum of its parts, serving as a profoundly somber and familiar symbol of the ongoing global health crisis.”

Finalist – Gianluca Attoli – “The dream is always the same” 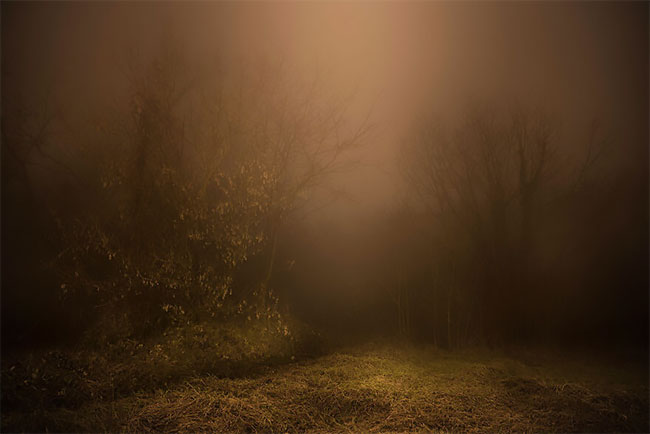 “Fog, mist, snow, powerfully pictorial skyscapes: all of these aspects, individually or combined, make the main subject(s) ”recede” for a moment, letting the mood and the atmosphere become the main and most immediate features of each shot. There’s a strange, strong feeling of comfort, bliss, and uneasiness when you stand right in the middle of a foggy nowhere, or in front of a frighteningly silent stormy sky. The abstraction and decontextualization of places and elements make them look even more anonymous, unidentified, and generic than they would be in clear view, to the point of reaching a hazy, surreal lack of visual references. You seem to physically experience a feeling of suspension and estrangement; everything looks unfamiliar and dreamlike. And just as in a daydream (hence the title), conscience and subconscious meet and mix up.” 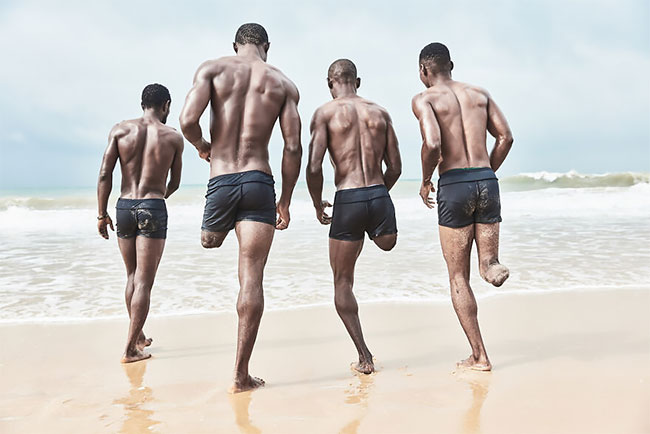 “4 members of “The Special Eagles”, Nigeria’s amputee football team, walk towards the sea on the beach outside Lagos.” 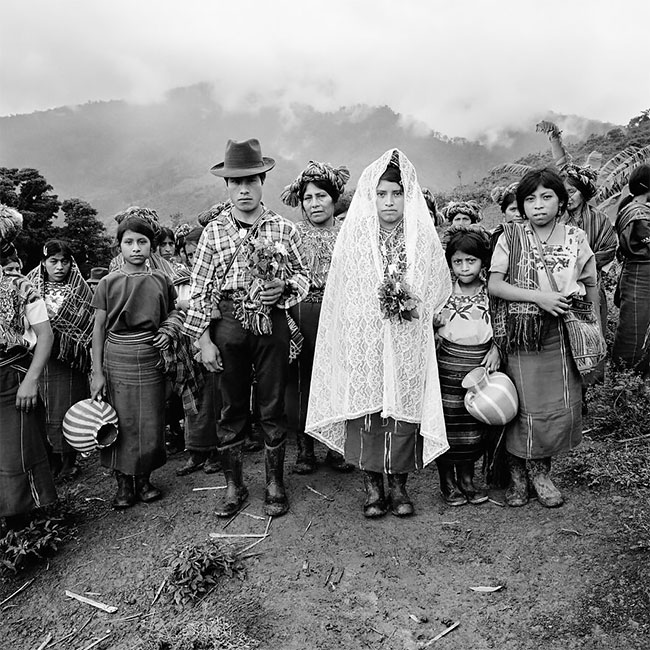 “Part of an eight-year project in Guatemala resulting in my first book, Our Culture is Our Resistance: Repression, Refuge and Healing in Guatemala, and numerous exhibitions and public talks intended to tell the story of the primarily indigenous-Mayan Guatemalans that were uprooted and killed during that country’s long and brutal civil war.” 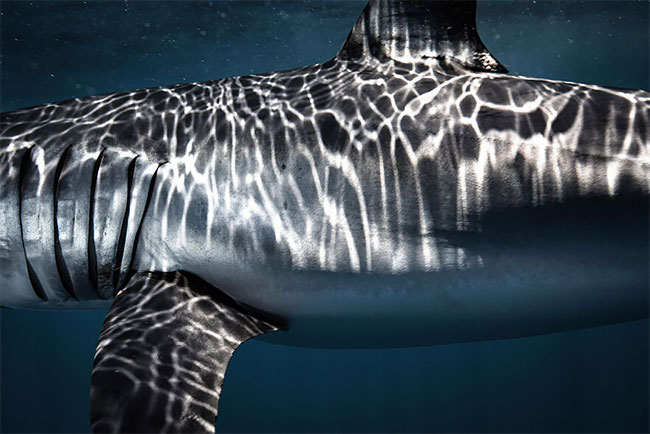 “Mako shark populations fell to endangered status in 2019, in part due to an error calculating the age of sexual maturity on which fishing thresholds were based. New science suggests this age be 19-21 years, instead of 4-6 years as previously believed. Even with full protection, it is expected that populations will continue to decline until 2035 as current populations reach maturity. This female, presumed to be pregnant, was photographed in Cabo San Lucas, one of the only known reproductive areas for mako sharks.” “Through a mise-en-scene self-portraiture series, “Made in The Shade” depicts characters in Mid Century Modern settings, mirroring an era that was aspiring for change. Despite this societal urge to create a new modern lifestyle, women rapidly lost their independence gained during the war period and returned to domesticated environments to fulfill decades of gender role traditions. The carefully staged scenes attempt to challenge female stereotypes. The series offers a powerful lens through which the viewer contemplates these women in a non-objectified way and reconfigures their essence. The absence of context gives these characters the power to be architects, scientists, musicians, engineers, doctors, etc.; roles often identified as being fulfilled by men.” 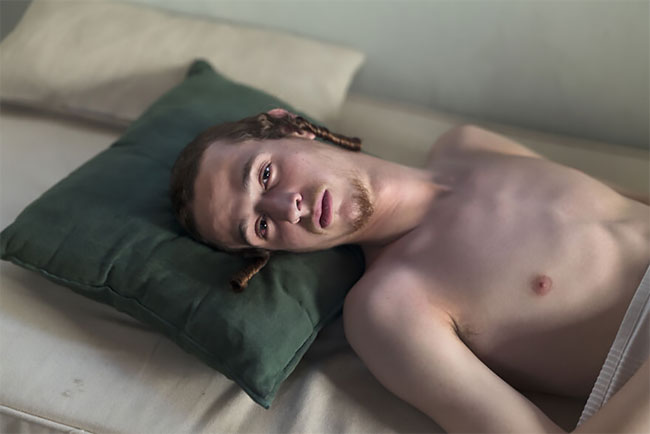 “At the age of 16, Baruch chose to leave his Orthodox Jewish community and to study at university. The dramatic and challenging decision forced him to question his identity and future. Einstein said, “The important thing is to not stop questioning. Curiosity has its own reason for existing.” The project explores how we choose our paths in life and questions how much control we have to change who we will become.” 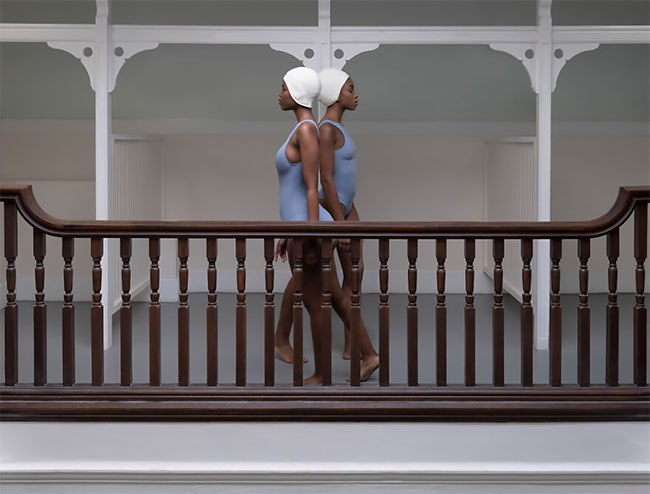 “I wanted to photograph Edinburgh’s swimming baths to show the beauty of the architecture while minimizing all of the modern elements. I love the geometry of the tiles, the lines on the bottom of the pool, and the typography including the ‘Deep End’ signs. Since my first poolside exhibition last year I have travelled to London, Paris, Manchester and Glasgow to add to my collection. I have been really inspired by the idea of having a slightly quirky Wes Anderson feel to them, especially with the pastel colour palette, and with the swimmers adding both a human element to each scene along with a dreamlike quality.”