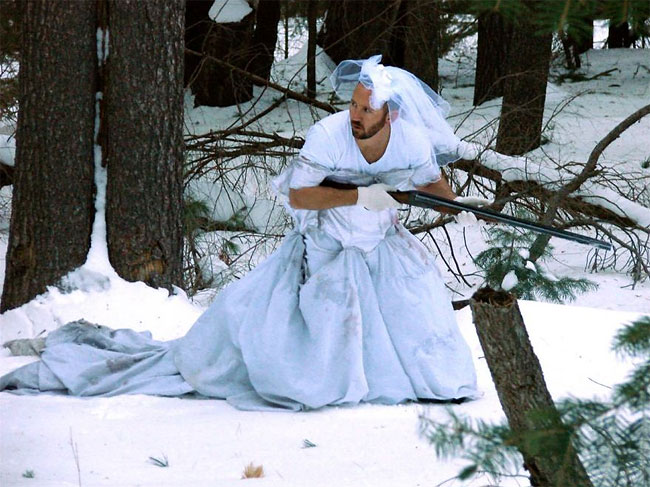 Everybody knows how ugly breakups can get, and we all have different ways of coping. But I’ve never seen someone handle their rebound quite like Kevin Cotter, who found 101 different ways to use his ex-wife’s wedding dress and became an Internet sensation because of it.

Cotter wasn‘t the only thing that his ex-wife left behind in 2009 after 12 years of marriage. The new divorcée got an unexpected breakup gift – his ex-wife’s old wedding dress. “What am I going to do with it?” he asked “Whatever the f**k you want,” she replied. And so he did.

Together with his family, Cotter started to brainstorm various ways to use the dress. He and his brother soon found themselves flooded with ideas, so they started taking pictures of Cotter using the dress in extremely ridiculous and hilarious ways.

What started as a rebound distraction, soon became a peculiar lifestyle. It didn‘t take long to recognize the potential in this story, so they decided to share the fun with the public. The brothers created a blog dedicated to sharing their uses for the wedding dress. Given its popularity, they released a book titled „101 Uses For My Ex-Wife’s Wedding Dress“ in 2011.

Here: Snow camouflage: “We don’t get a lot of snow here, but an hour drive away there’s a mountain that gets snow every winter. The reaction was pretty good.” 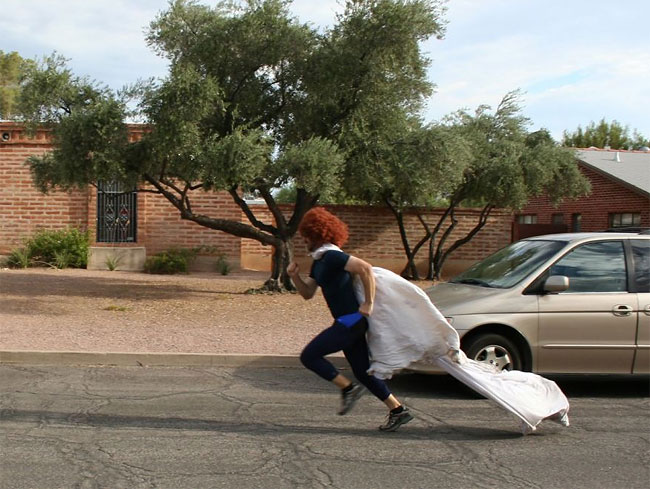 Crime-fighting cape: “I went to a superhero-themed workout with some friends as Captain Wedding Dress.” 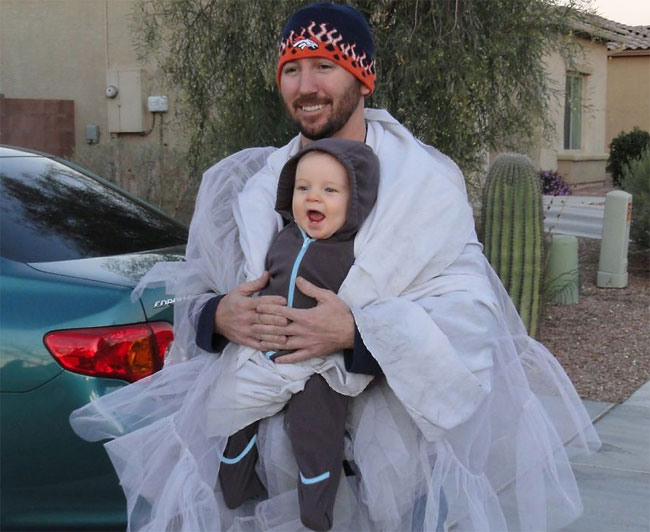 Baby carrier: “It works well as a baby sling–and a dog sling.” 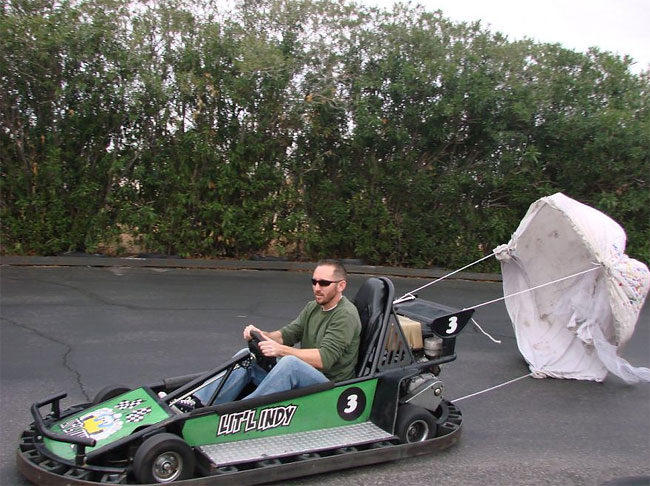 Go-cart parachute: “The dress is heavy, so it was tough to get it blown up and airborne.” 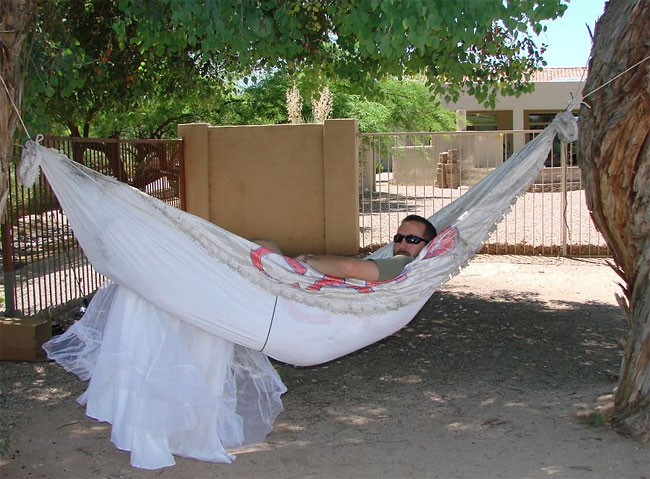 Hammock: “I was afraid to commit all of my weight to the hammock as my brother was encouraging me to. But the dress supported me with no problem.” It also became the inspiration for his book cover. 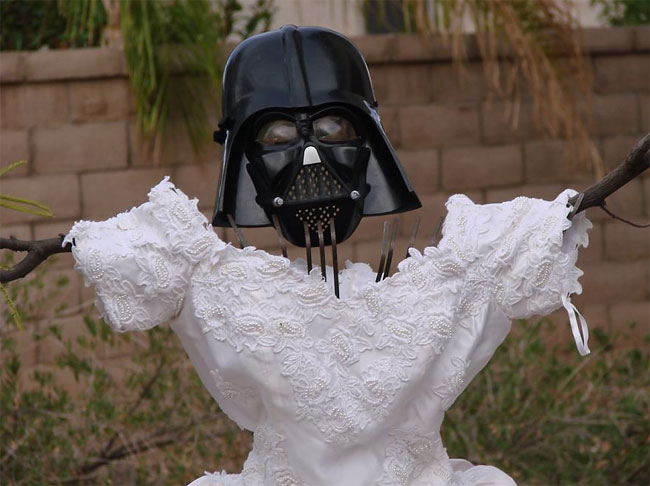 Scarecrow: “We had the dress set up, minus the head … and when I saw the Darth Vader mask, I knew it was right.” 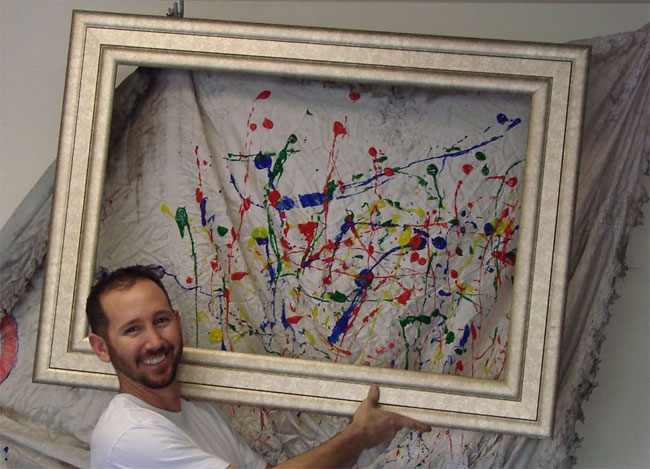 Contemporary art: “I really like how this turned out. If the dress didn’t have more work to do I might have left it on my wall.” 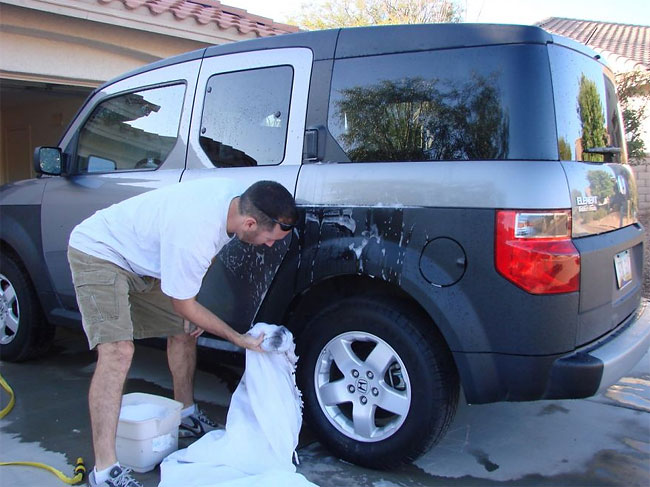 Car wash cloth: “It doesn’t make a great towel because it doesn’t hold water very well. It didn’t work well as a mop either.” 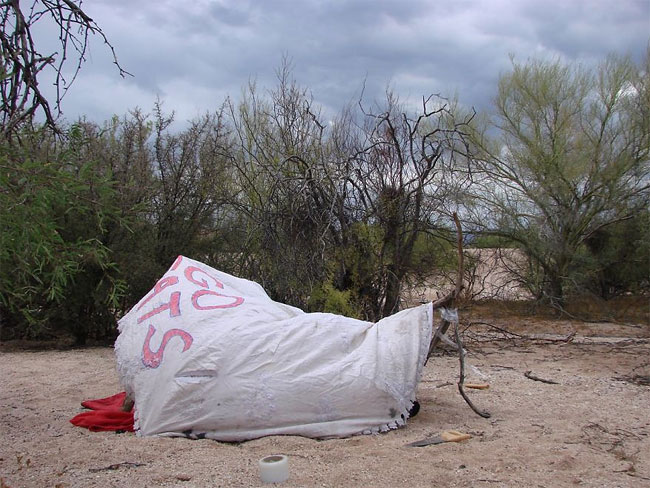 Emergency shelter: “It didn’t work out too well because I set it up in sand, so the support sticks didn’t hold it up so well. But I think in a pinch it would be better than nothing.” 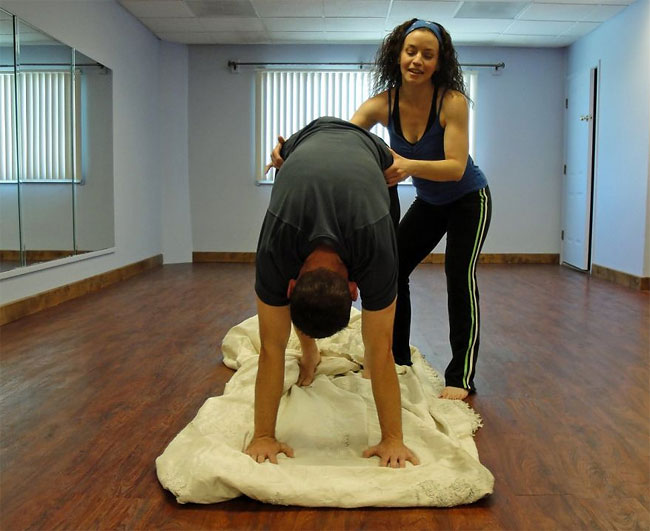 Yoga mat: “This was my first attempt at yoga and it felt really good with my ex’s dress as my mat.” 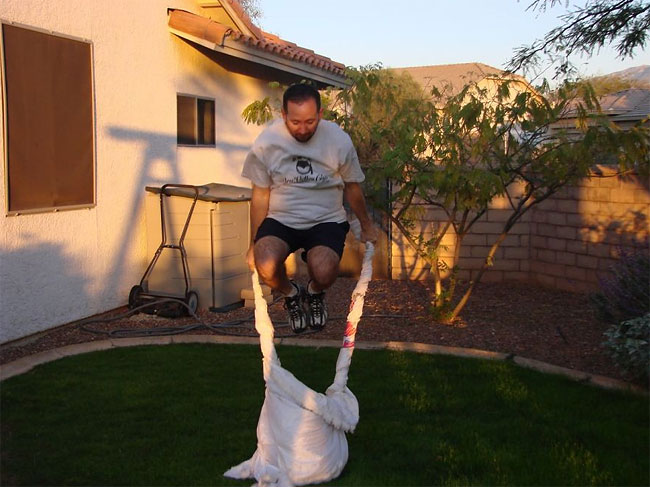 Jump rope: “I am the current wedding dress jump rope world record holder. Guinness told me my accomplishment wasn’t worthy of their book of records, but I’m still proud of my 37 consecutive jumps.” 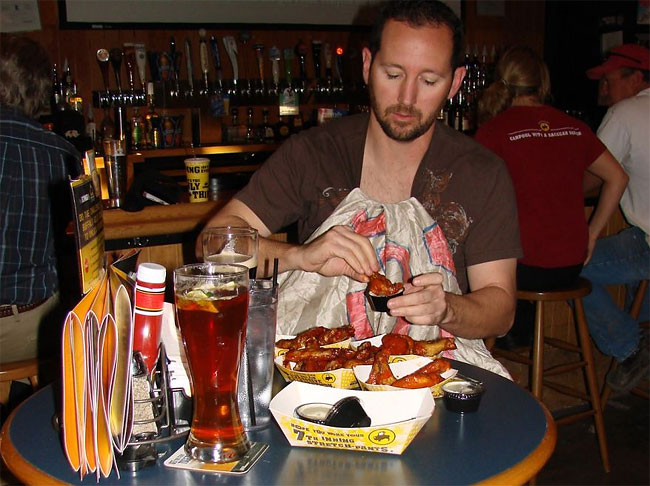 Manly bib: “The funny thing was that (the restaurant) was full of people and not one person said a thing. Not even our waitress.” 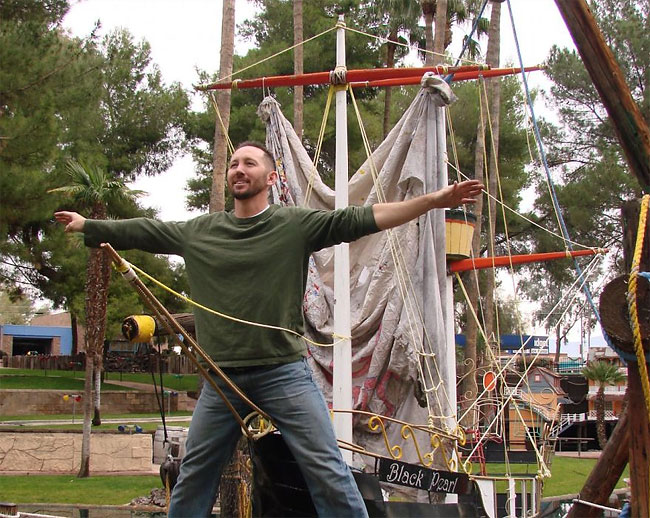 Sailboat: “We don’t have much water here in Tucson, so we set up the boat sail on a pirate ship at our local miniature golf course.” 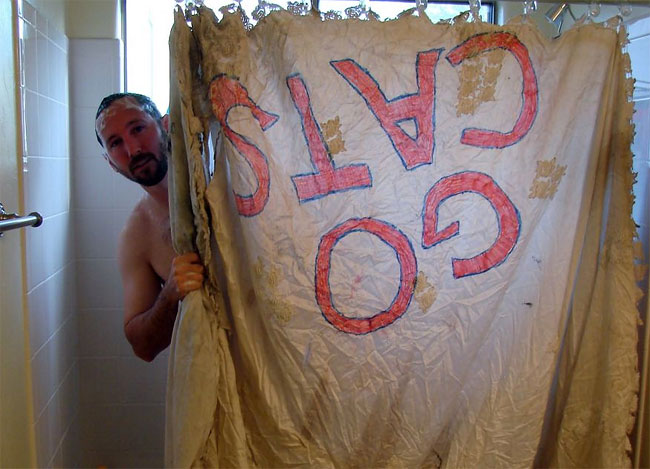 Shower curtain: “The trim has holes in it so it just worked really well. I only took one shower with it up there, because it’s not waterproof.” 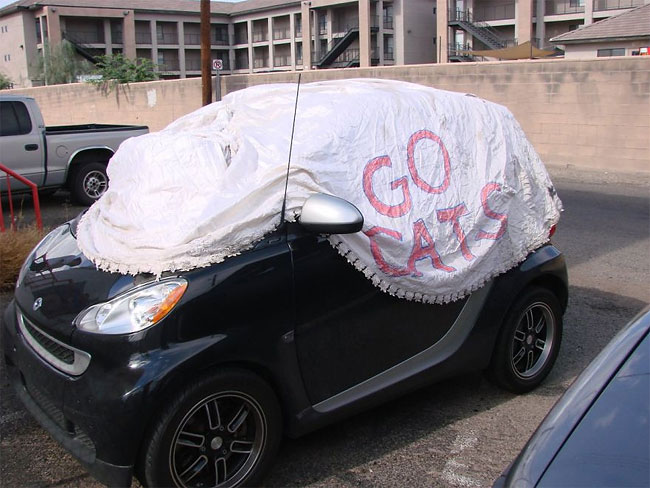 Smart car cover: “It can get so hot here that you can barely touch your steering wheel. Covering your car is an advantage.” 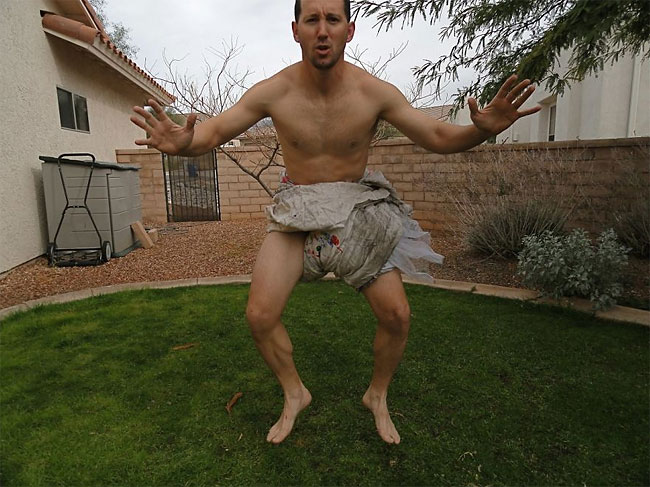 Sumo Mawashi: “I think the wedding dress made a fine sumo mawashi. Although it was one of the later applications and did leave me a bit itchy.” 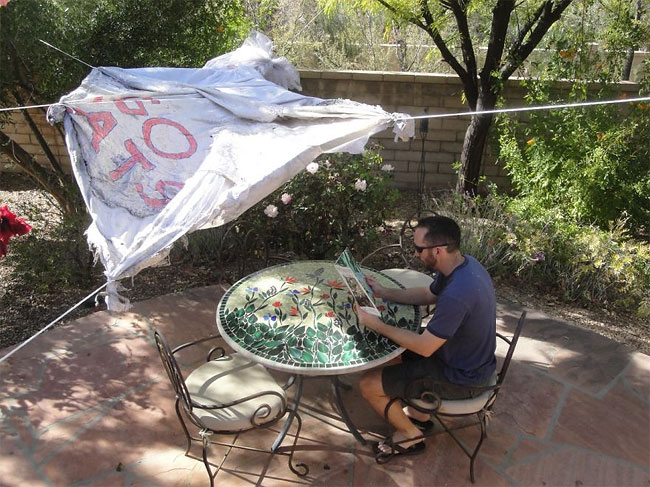 Sun shade: “It took a little while, maybe half an hour to get it strung up. But it was successful.” 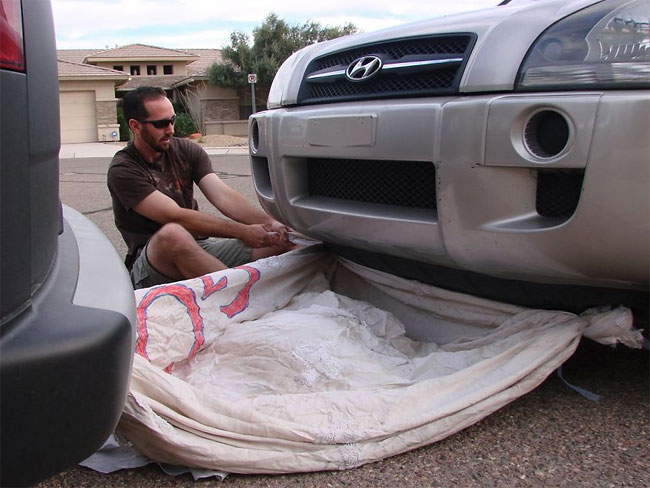 Tow rope: “I thought I was gonna have to stage it but … we towed an SUV over a mile. I couldn’t believe it.” 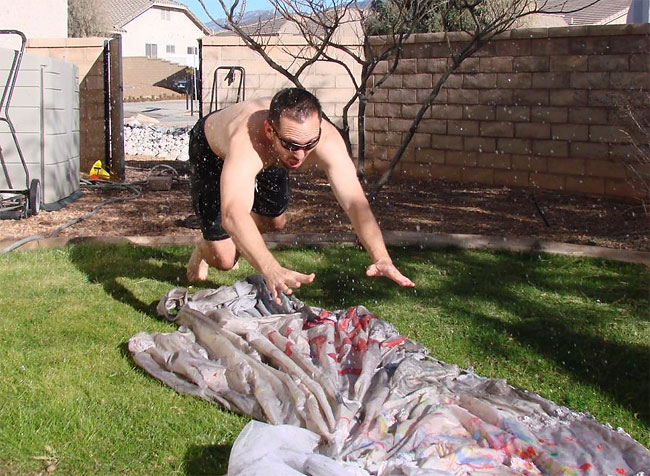 Slip ‘n slide: “This was suggested multiple times by visitors to my blog. I’m not sure what those people were thinking. Wedding dresses are slippery and I definitely didn’t slide on mine. This application hurt.” 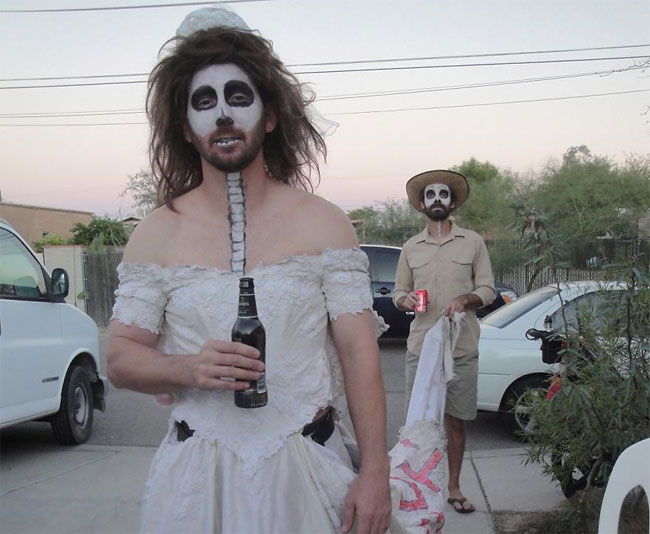 Zombie gear: “Every year Tucson has a Day of the Dead parade and celebration downtown. I went as a zombie bride the year before last and was a hit with the crowd.”

A Creative Dad Brings Family-Favourite Cartoon Characters To Life By Putting Them Into Hilarious Situations
Fruit Ninja in Real Life
With No Photoshop: These Creative Vintage Collages From An American Artist Are So Exciting
Photographer Finds Something Incredible After Flipping His Photo
Creative Employees Transform Their Office with 'Star Wars' Murals Made of 3,597 Post-Its
Terrible Rough Drafts from Your Favorite Movies
Twins Show What Pop Culture Characters Would Dress Like In Real Life
Creative Photo Manipulations Of Animals By Indonesian Digital Artist Aditya Aryanto
The Ultimate Nicolas Cage Prank
This Artist Took Idioms Too Literally And Illustrated The Hilarious Result
This Woman Takes The Most Creative Selfies On The Web
This is Reportage: Award-Winning Wedding Moments Captured During The 2020 Pandemic
Artist Leaves Dress In The Dead Sea For 2 Years And It Turns Into Glittering Salt Crystal Masterpiece
These Nature Inspired Wall Hooks Are A Creative Twist To The Traditional Hanger
Couple Travel To Iceland With A Full Crew For Pre-Wedding Shoot Atop Volcanic Rocks And Glaciers
Air Clicker
People In Berlin Came Up With A Creative Way To Fight Swastikas
Snuk Polar Coaster
"Postcards From Google Earth": This Artist Finds Strange Beauty in Google’s Apocalyptic Glitches
Superb Whimsical Digital Creations By Jean-Charles Debroize
Artist “Completes” Clouds By Adding Silhouetted Shapes To Them, And The Results Are Beautiful
The Obama Wedding Photos Will Remind You Of Better Times
Brazilian Artist Creates Stunning Digital Concept Artworks
Story of My F*cking Life: A Journal for Banishing the Bullsh*t, Unlocking Your Creativity, and Celebrating the Absurdity of Life
creative, dress, finds, wedding

An Oregon Couple Rushed Through Their Wedding Because Of A Wildfire And The Photos Are Breathtaking
Dear Blank, Please Blank
The Proliferation Of Nostalgia-Inducing LEGO Sets Indicates That They're Far More Than Just A Child's Toy
Terrible Rough Drafts from Your Favorite Movies
Amazing Nostalgic Pixelart Animations by Gerardo Quiroz
Couple Poses With Gas Masks For Their Wedding Photos To Protest Heavy Pollution In China
"Postcards From Google Earth": This Artist Finds Strange Beauty in Google’s Apocalyptic Glitches
These Students Understood The Assignment When Their Teacher Asked Them To Make Hats To Prevent Them From Cheating During Their Exams
Man Hilariously Recreates Romance Movie Scenes with Boss's Dog
Japanese Food Artist Eiko Mori Makes These Cute Creative Toasts. Bon Appétit!
2007 ‒ 2023 by Design You Trust. Proudly hosted by WebHostingBuzz.
Privacy Policy · Terms of Service · Content Removal Policy ❤️ 🇺🇦