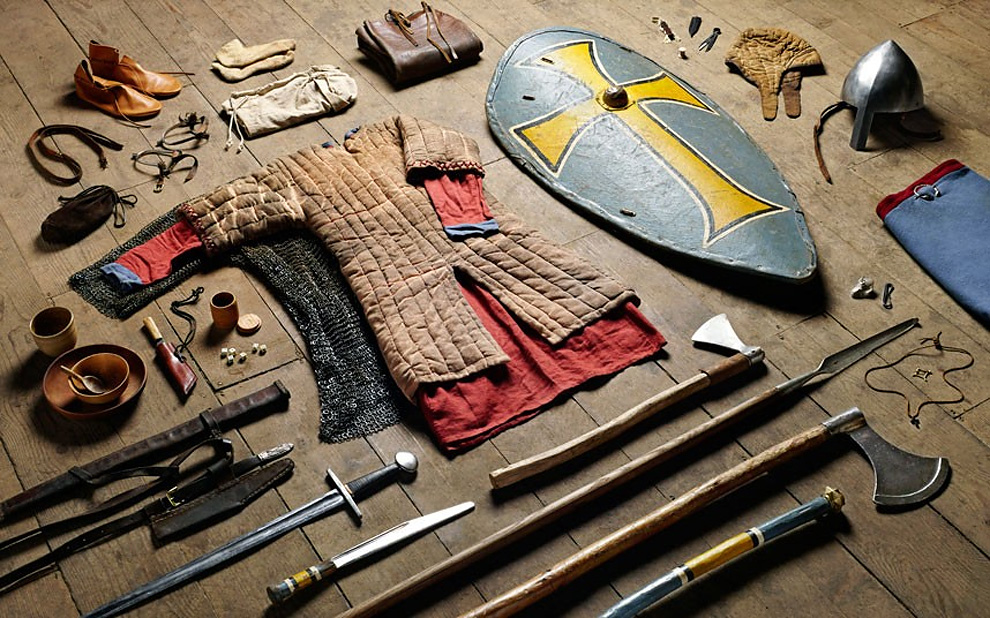 Photographs by Thom Atkinson of military kit through the ages suggest that while technology evolves apace, the experience of soldiers in the face of war is unchanging. 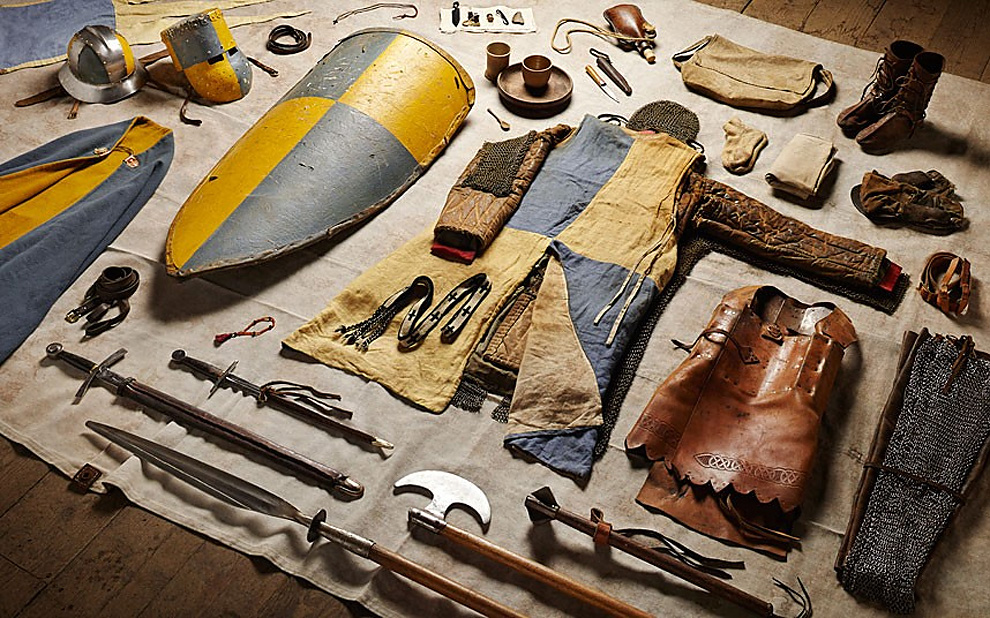 1244 mounted knight, Siege of Jerusalem: The small white cloth (above shield) shows the soldier’s personal effects: snips for cutting small items; a leather box of needles; a roll of thread, a fire steel and a shard of flint for sparks. The cloth itself could be used for tinder to start fires. 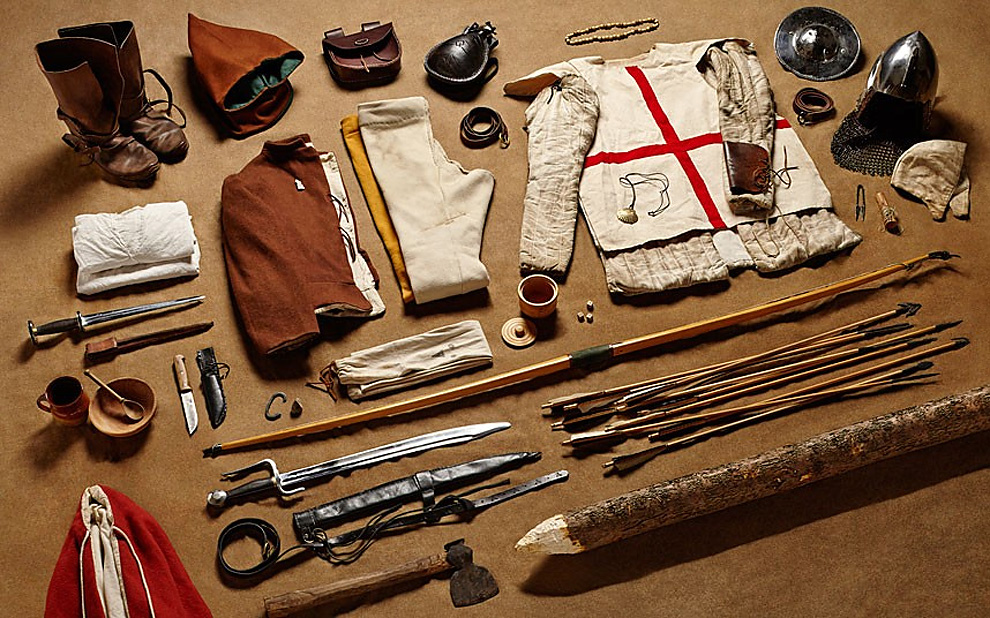 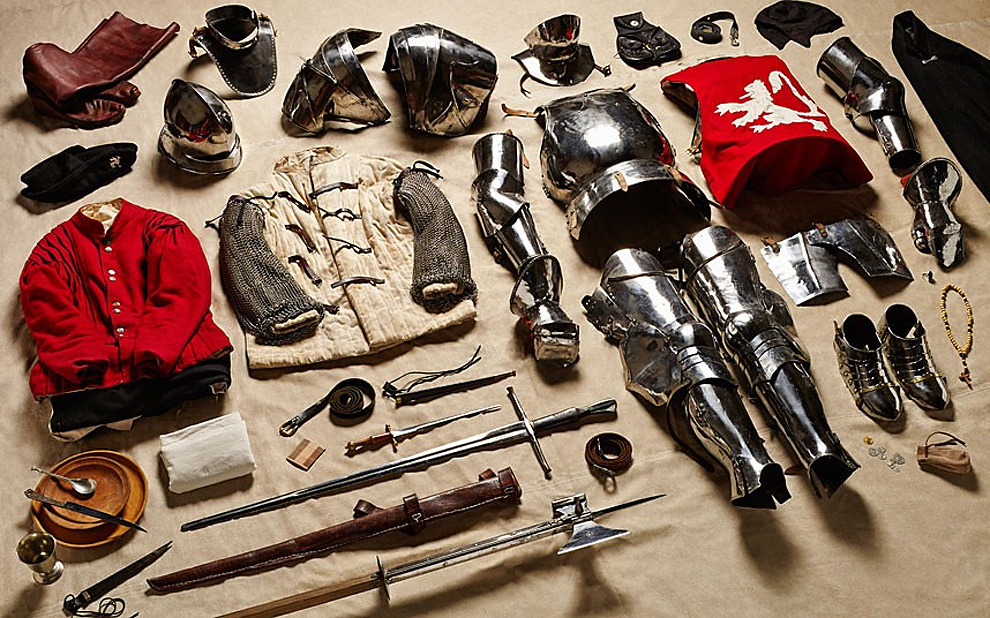 1485 Yorkist man-at-arms, Battle of Bosworth: The sword blade was stamped with a maker’s mark. A dagger called a misericorde (above sword) could be used to kill a dying comrade on the battlefield more quickly by stabbing him under the left armpit to the heart or through the eyes to the brain. 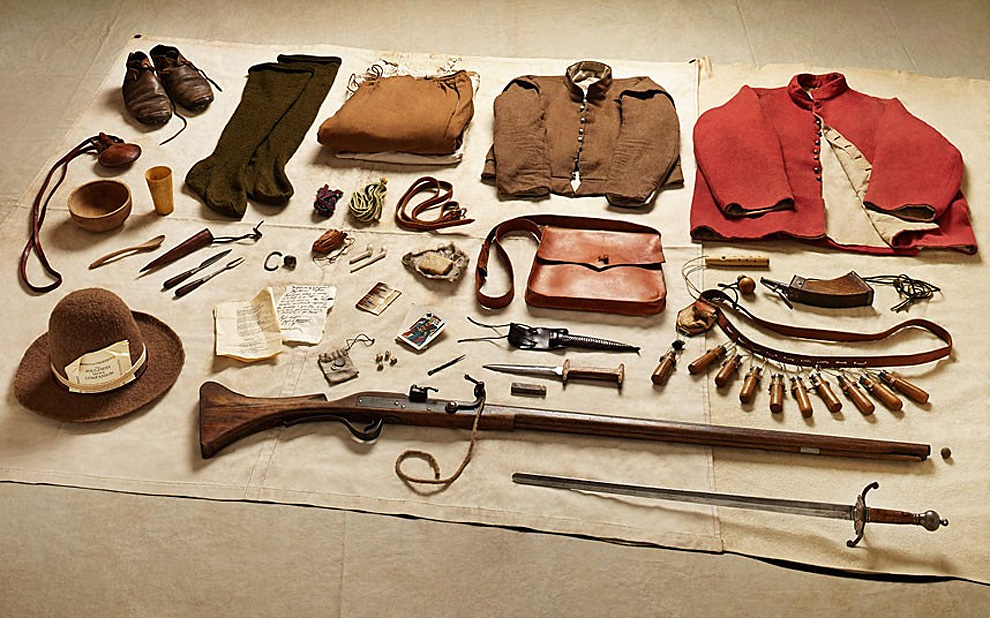 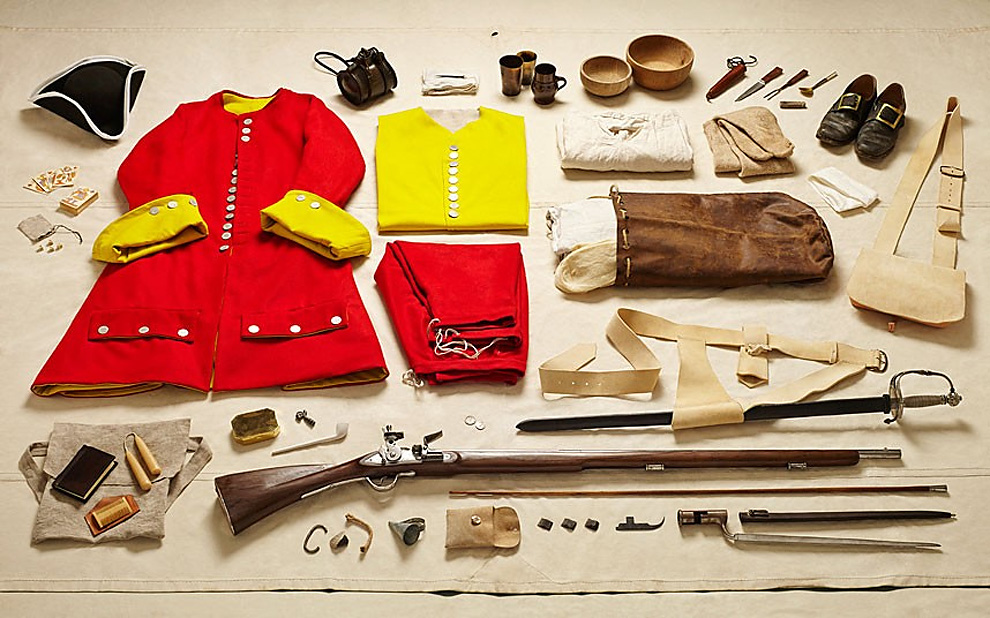 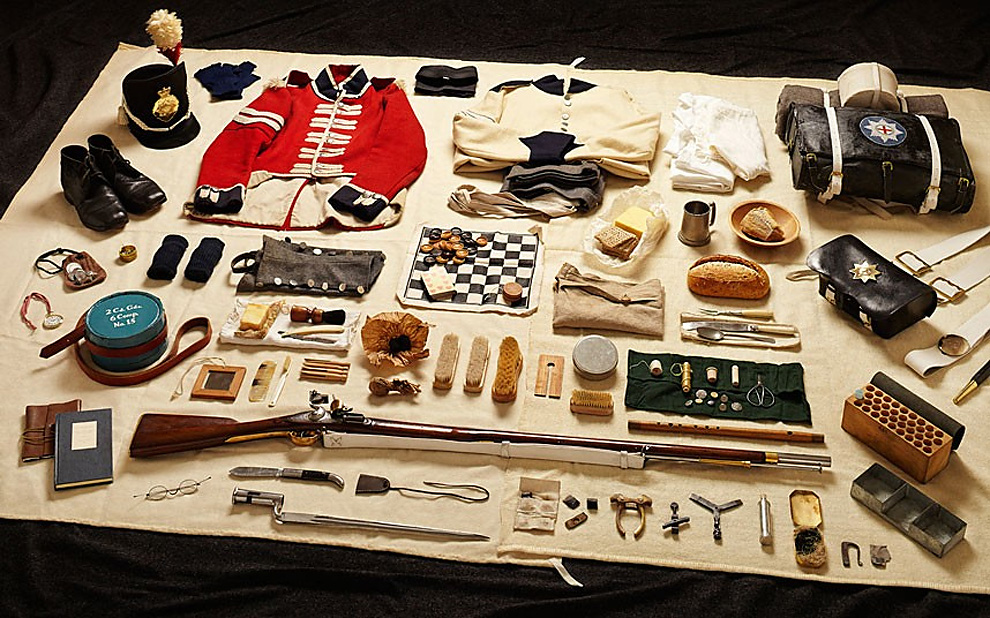 1815 private soldier, Battle of Waterloo: Shoes (left) made of leather with the rough side facing out were straight-lasted, so there was no right or left shoe; soldiers would swap them around to prevent excessive wear on one side. Games (centre) included draughts, cards and a yo-yo. 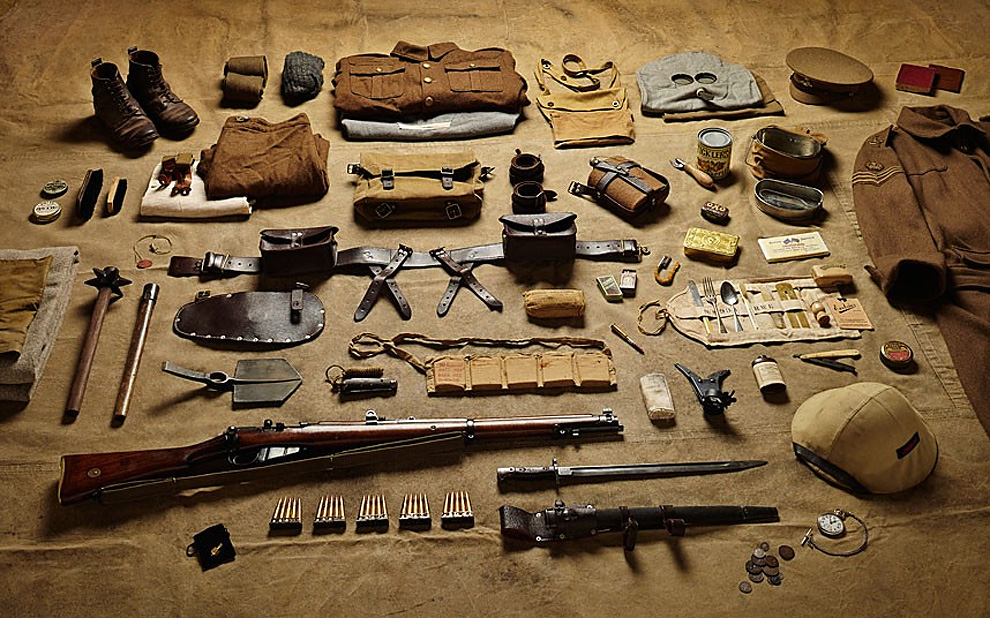 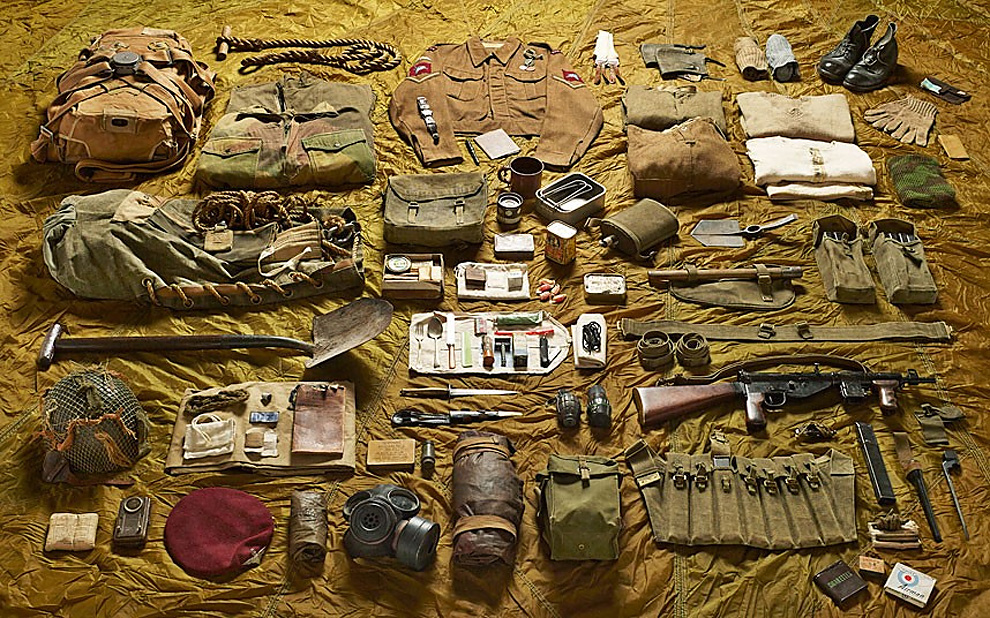 1944 lance corporal, Parachute Brigade, Battle of Arnhem: Two kinds of hand grenade were issued (bottom): the No 36 Mills grenade used in the First World War and the No 69 made from Bakelite, which caused less collateral damage. The Sten Mark V submachine gun was first issued in 1944. 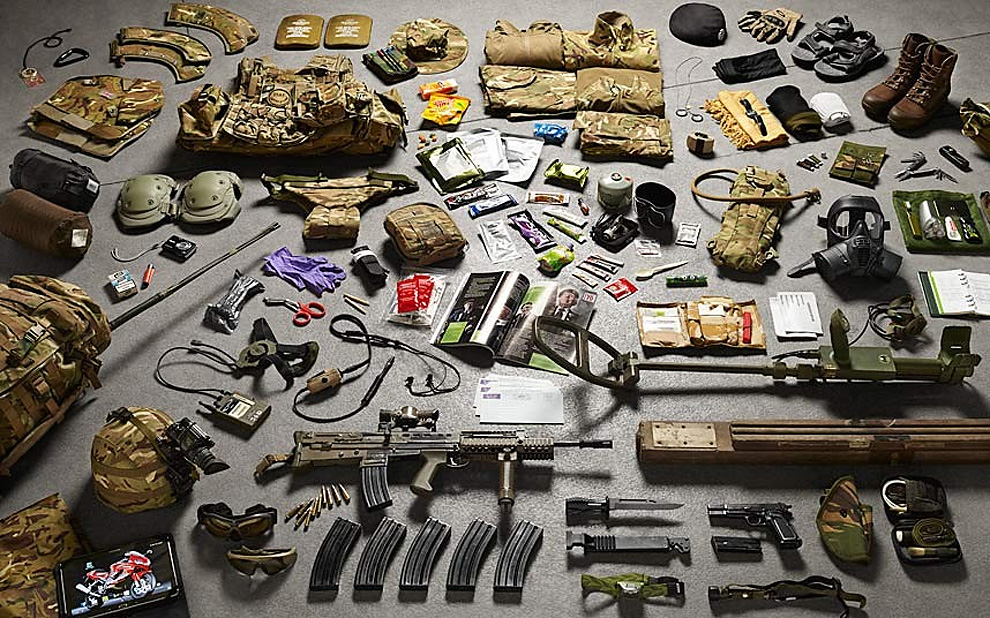 2014 close-support sapper, Royal Engineers, Helmand Province: Sandals (top right) are issued kit, as soldiers may need to run to cover even while showering. Ballistic protection (centre) for the groin is very restrictive but a life-saving piece of equipment. An iPad Mini (bottom left) is not issued but most soldiers take a tablet for down time.

Bride-to-be Whose Fiance Died Just Days Before Their Wedding Has A Heartbreaking Photo Shoot In Her Dress ‘To Say Goodbye’
Wonderful Color Photos Of American People In The 1950s
Beautiful 'Then And Now' Pictures Of Women From London's '80s Subcultures
These Vintage Romanian Portrait Photographs In Terrible Condition Are Totally Haunting
Creative Architecture Photography By Nick Frank
Photographer Captured Post-Apocalyptic Images Of Abandoned Bangkok Shopping Mall That Hides A Fishy Secret
Femme Fatales: Mug Shots Of Female Criminals From Early 20th Century Australia
The Line - Aftermath
Inside the World of Men and Dolls
"Impressions Of The Roaring Twenties": 40 Found Snaps That Show Lifestyle Of Young People In The 1920s
Beautiful Nordic Nature Through The Lens Of Photographer Roger Brendhagen
Woman Uses Her iPhone To Capture Portraits Of Strangers On Her Daily Commute To Work, And The Result Is Impressive
Retro Photos In WTF Style
Bearded Man Playfully Poses For Pin-Up Calendar To Raise Money For Children's Charity
French Photographer Visited Chernobyl, And The Captivating Photos Show Just How Suddenly Time Stopped In Its Tracks After The Disaster
Animal Carnival in Rio de Janeiro
Different Types of Rebirth: Stunning Underwater Series by Marta Syrko
Bright Moments in Life of USSR People
These Photographs Of Tattooed Senior Show That Body Art Looks Beautiful On Everyone
Sensual Fine Art Self Portraits by Beth Parnaby
Battle Of Helm's Deep Made from Lego
Stunning Black And White Photos Of A Young Katharine Hepburn In The Grass Taken By George Hoyningen-Huene In 1934
Beautiful Women Portraits By Marta Bevacqua
"The Short And Tragic Romance": Photos Of Nancy Spungen And Sid Vicious Together In 1978
battle, hastings, helmand, military, through