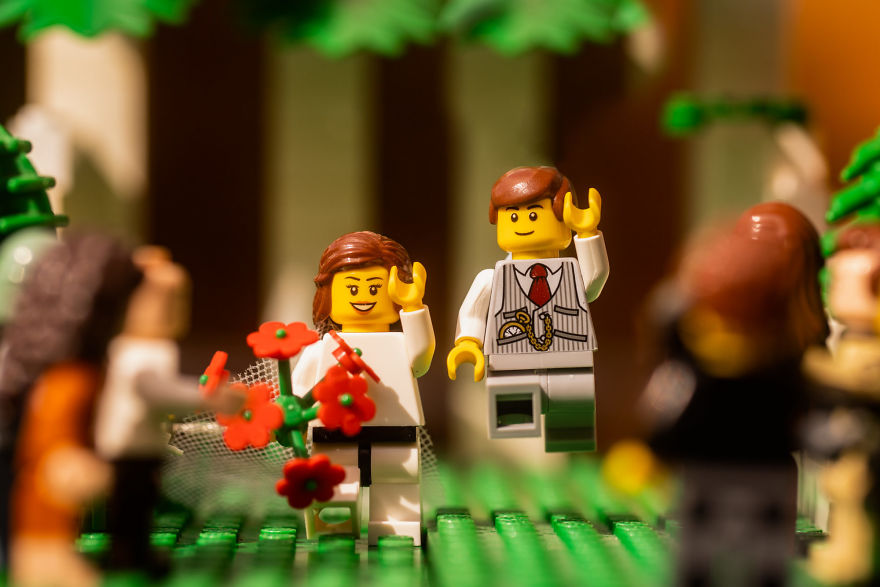 UK-based wedding photographer Chris Wallace of Carpe Diem Photography has come up with a wholesome way to keep shooting. Wallace married his old LEGOs and captured the entire event, sharing the pics online for everyone to see. Not only did he carefully organize the entire event, but he masterfully documented it as well, showcasing his 11 years of experience during which he has shot over 700 ceremonies.

You could say everything began from the coronavirus pandemic. “I went from being an incredibly busy wedding photographer with no time off to being off stuck at home, literally overnight,” Wallace told Bored Panda.

With not much going on, Wallace remembered one of his old passions. “I love LEGO and know it [still] has a huge following, so I dusted off my 20-year-old set from the loft and bought a LEGO bride and groom from Amazon,” the photographer explained. “It took 3 days to plan and take the photos and write the blog.”

“It was so much fun, so easy to be creative and take my time, rather than have very limited time at a real wedding. I can’t wait to continue the story of the bride and groom.”

Wallace also wanted to use the opportunity of his story going viral to remind everyone to keep their hopes up. “It has been such a difficult time for self-employed people, income has stopped for us all, I would encourage anyone to go out and make something positive to share with the world!”

“Wow, what an incredible day! Florence & Fred were extremely lucky to have their wedding during lockdown, the suppliers pulled out all the stops to make this magical day happen. I started Florence & Fred’s wedding journey with a pre-shoot on the beach during sunset, in-front of my computer screen after I typed ‘sunset’ into google. As you can see from their first photo, we were blessed with that incredible sky.” “They first met in a warehouse, it was a meeting like no other: on the Amazon conveyor belt, their eyes made contact and they fell in love, it was from that moment they knew they would be together forever.” 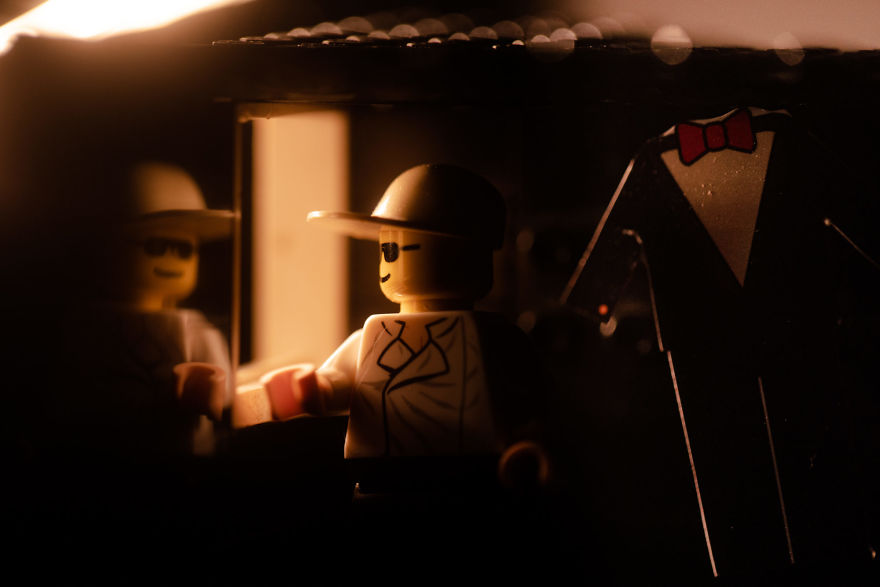 “On the wedding day, Fred arrived at the venue in his ’90s Mercedes SL-500 that he found in the attic. Along with his groomsmen, he enjoyed a relaxing drink prior to the ceremony. Florence, unfortunately, had to get ready on her own as her bridesmaids were in isolation and due to inflated prices, were far too expensive to buy from Amazon.” 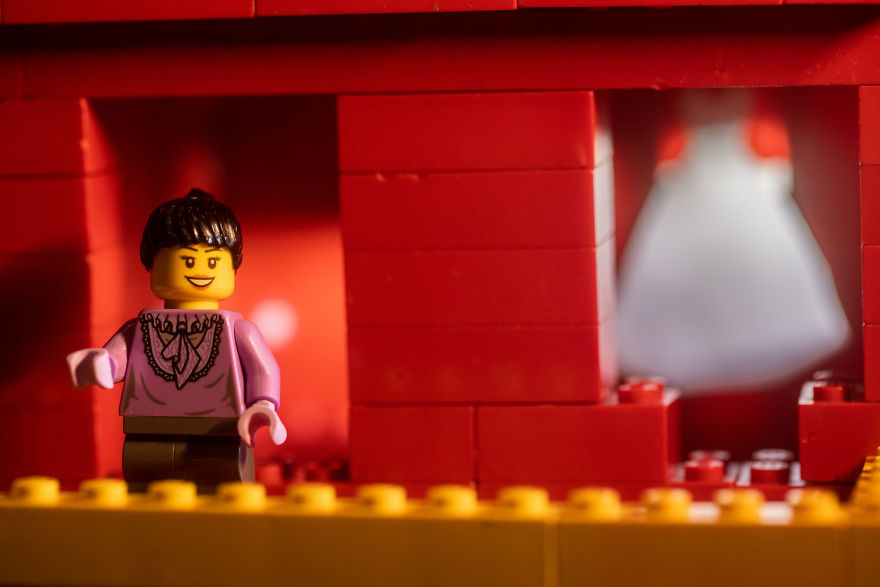 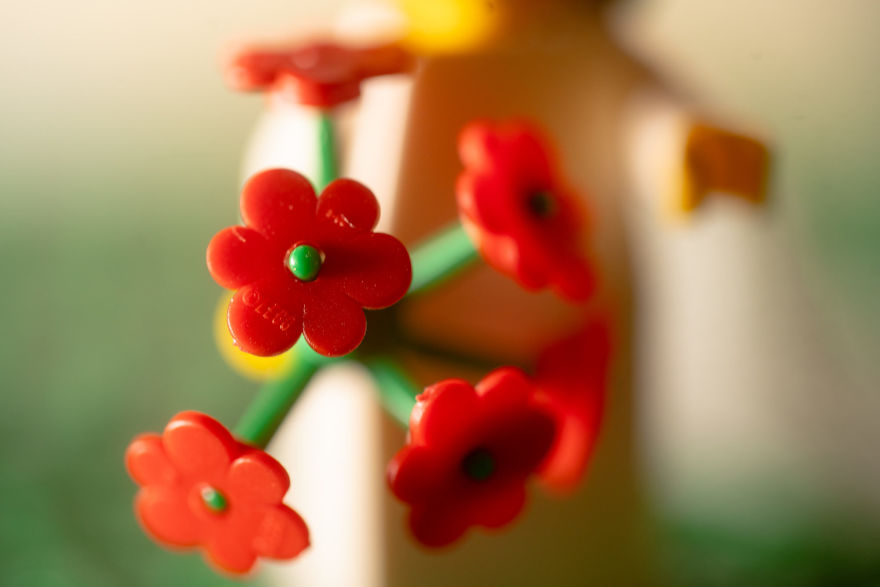 “The ceremony was held outdoors in the most gorgeous of settings, filled with the greenest of plastic leaves and most colorful plastic flowers. We were also very lucky to have some special guests at the wedding, including Chewbacca, Hans Solo and a 1980 LEGO spaceman amongst others.” 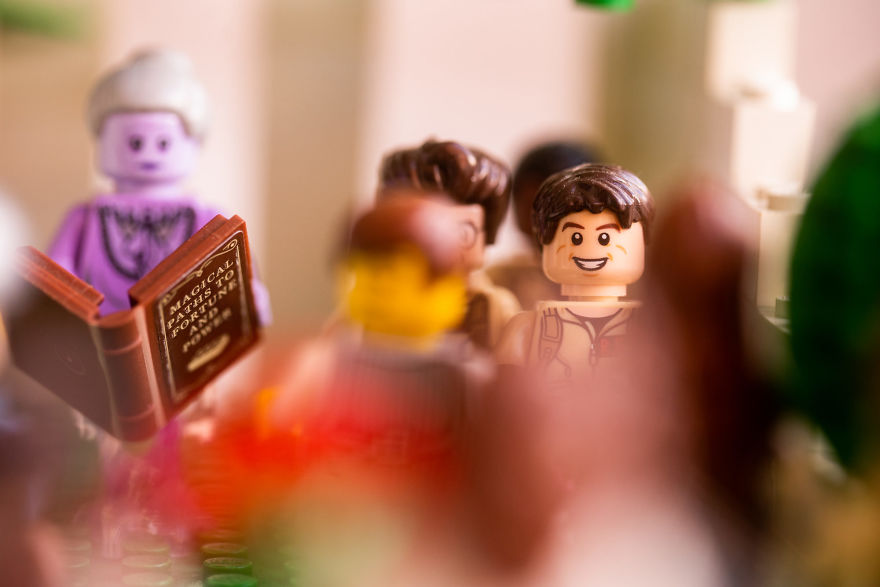 “The sun was out throughout the ceremony, which wasn’t ideal for the registrar as she was part squid, but great for everyone else.” 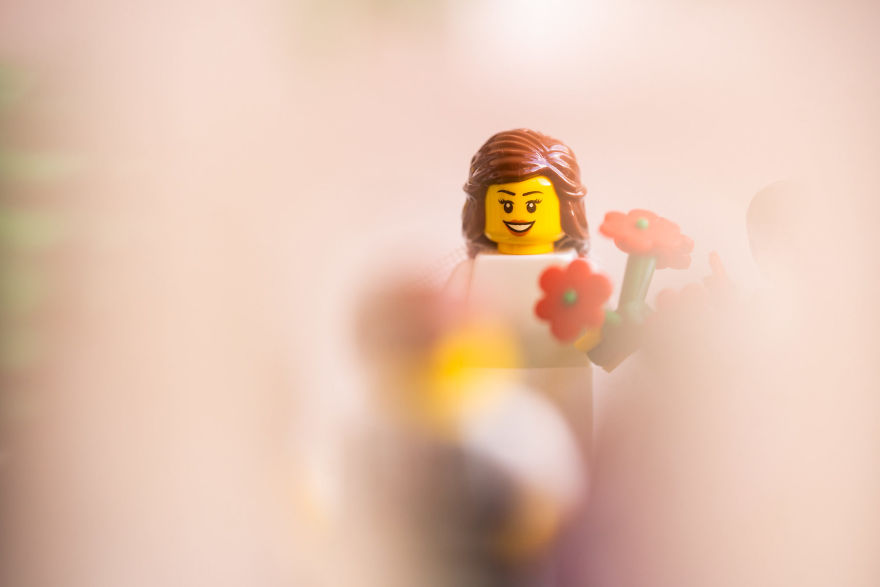 “Florence walked down the aisle with her father, Harry Potter, which was a very emotional time for all. I’m not sure anyone even noticed she had her dress on backward.” 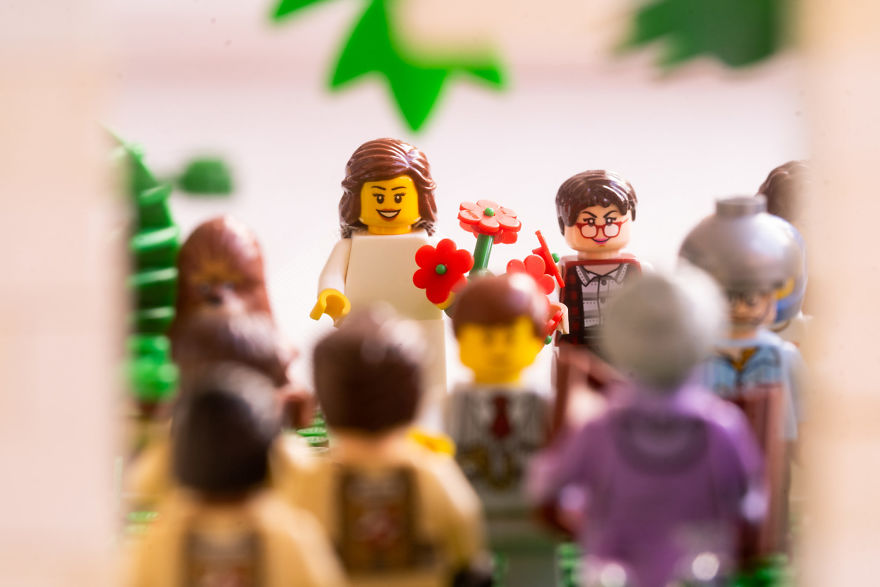 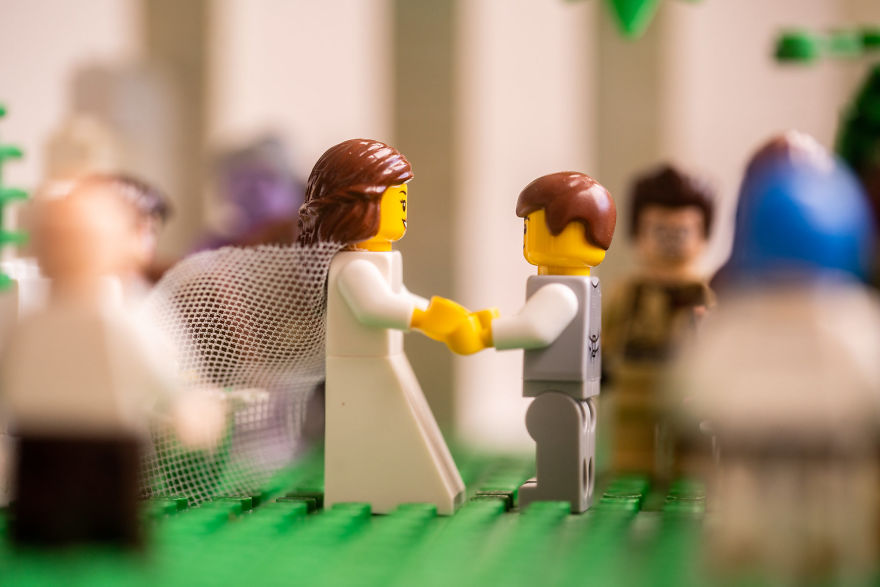 “After the ceremony, we started with some group photos with family and friends, then took the bride and groom off for some portraits in the back garden and on the shed roof where we were blessed with blue skies, clouds, sunshine and a Staffordshire Bull Terrier.” 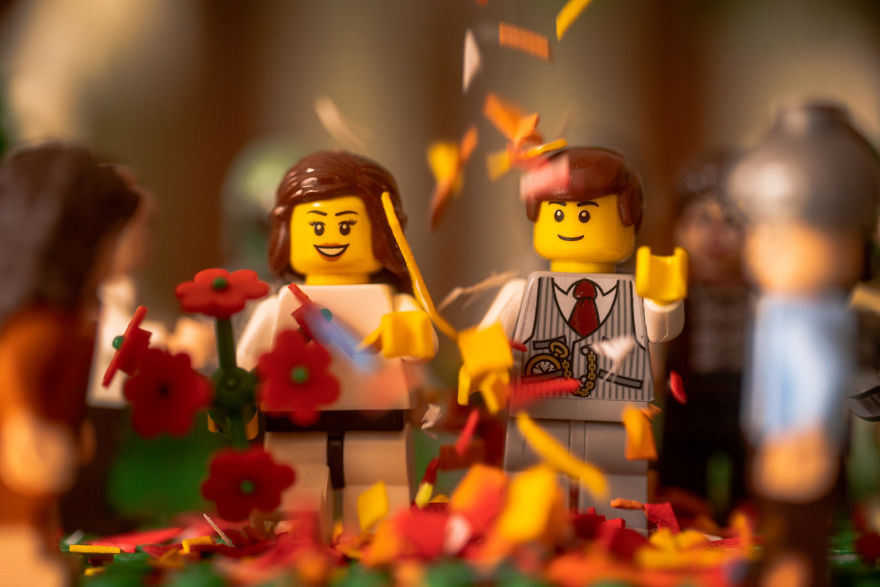 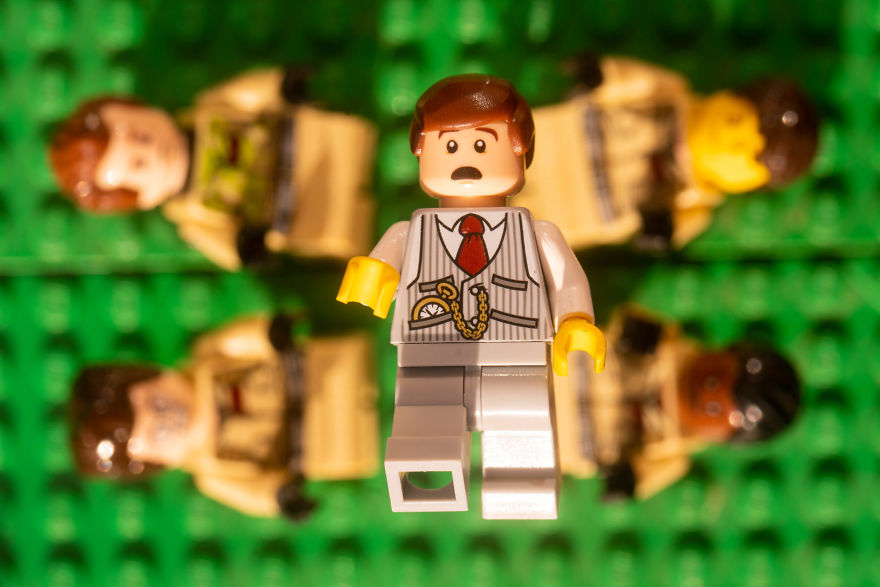 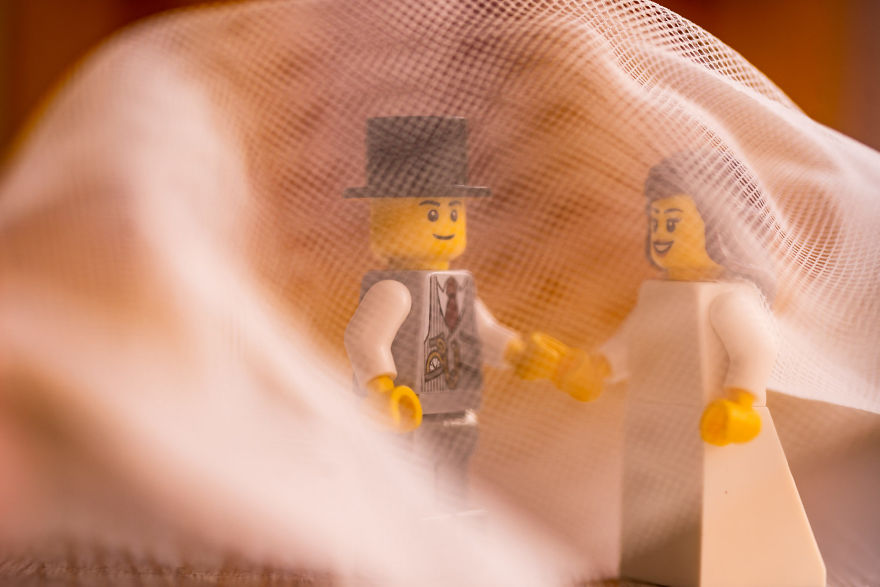 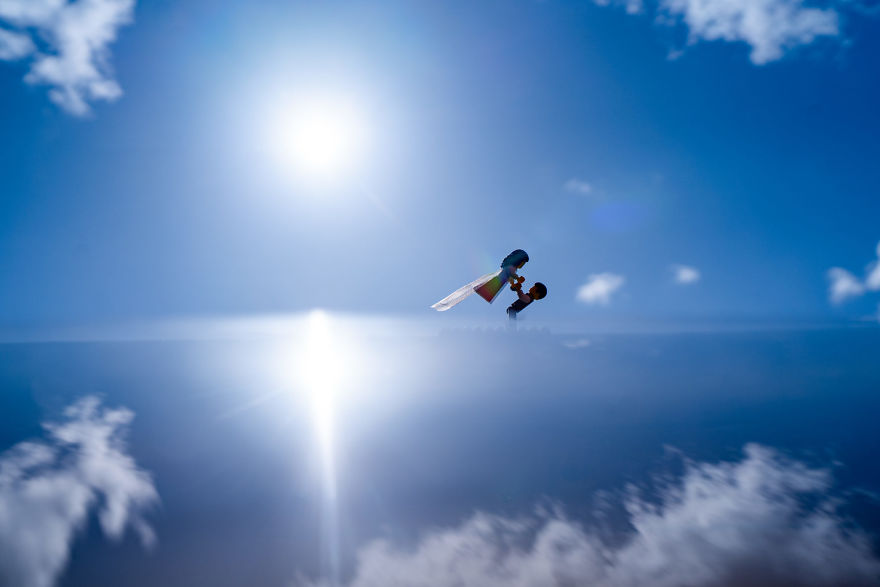 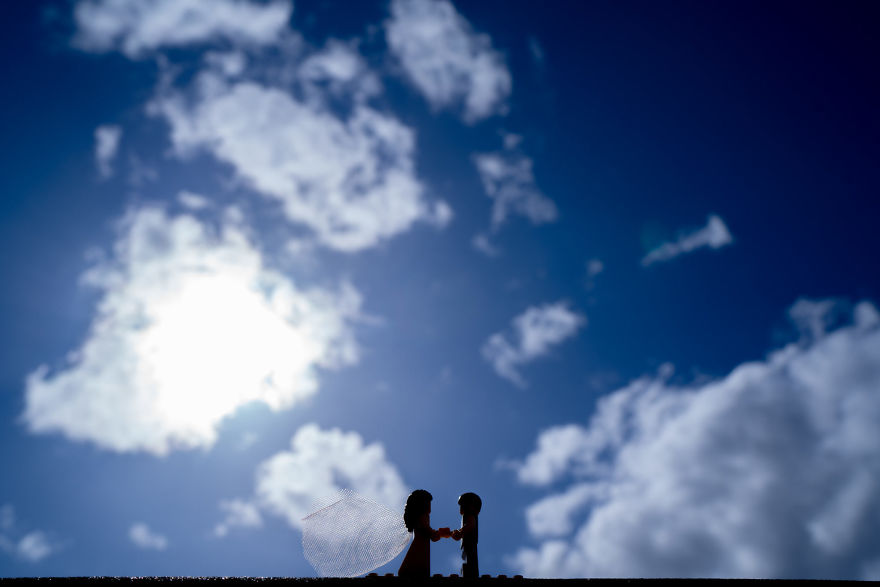 “Fred then surprised Florence with a drone flight which took in all the spectacular sights of Middlewich, Cheshire. Florence was delighted to get some fresh air, especially after self-isolating for the past 4 weeks.” 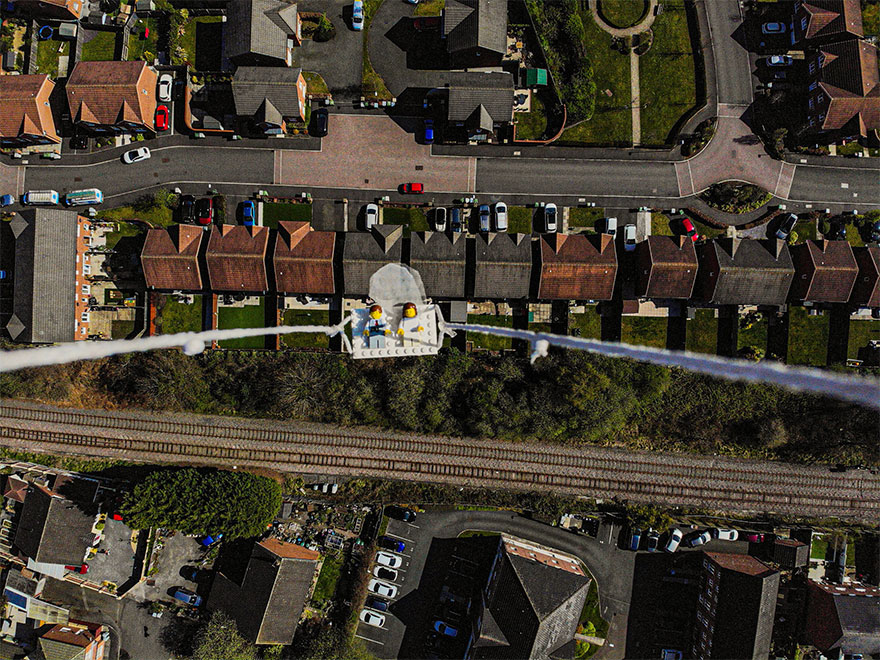 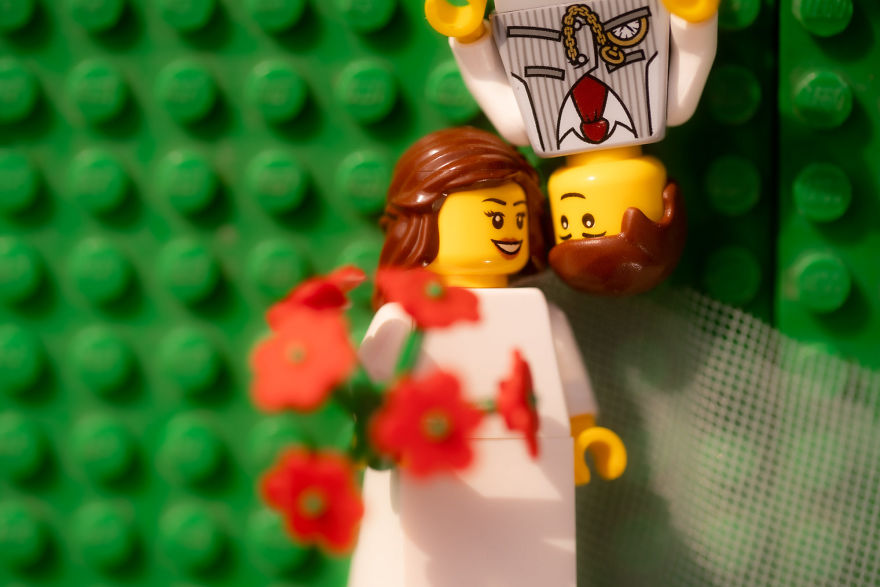 “The stunning venue was set in red and yellow plastic brick, because these are the colors I had most of, and set in the incredible location inside a summerhouse/shed in the heart of Cheshire. We headed there after the portraits to hear some very funny but silent speeches, before heading back out for photos of the sunset.” 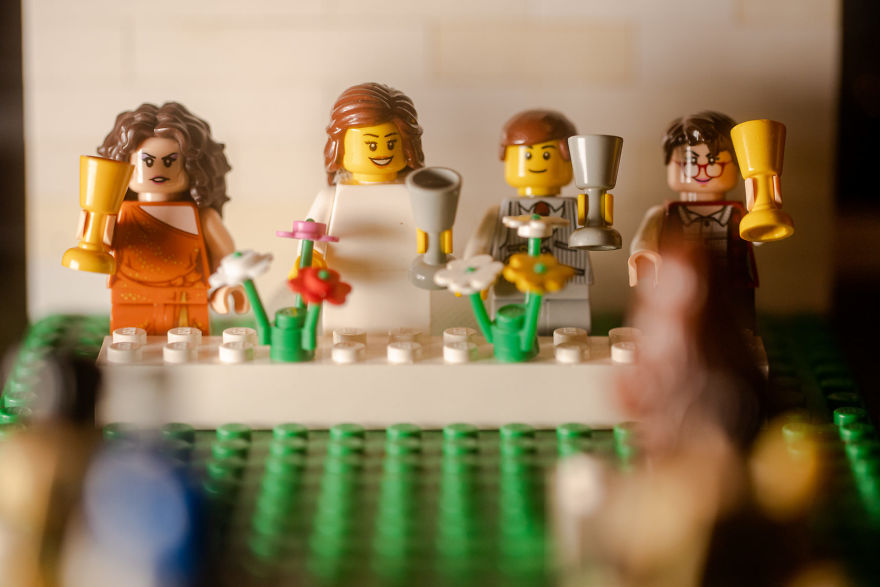 “This was one of the most amazing sunsets we have ever seen, created by a flash and an orange gel. Oddly enough, after the sunset, it poured with rain and this amazing couple stood getting wet for at least 20 minutes while I controlled the flash, camera and squirted water at them, but was worth it for the images we created.” 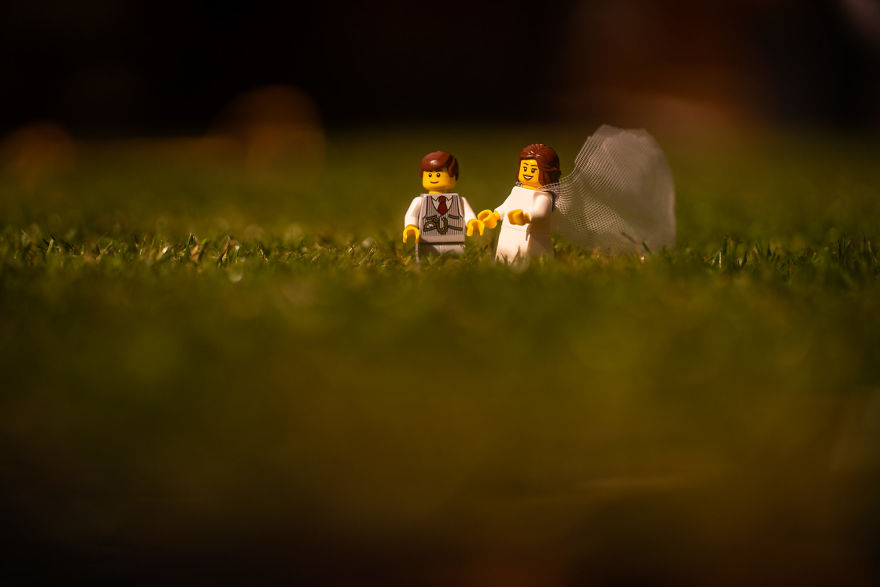 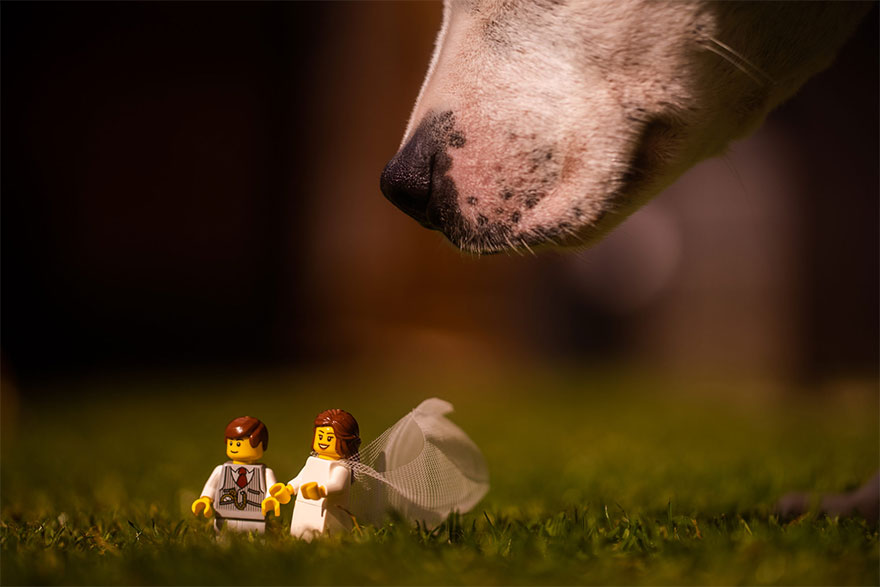 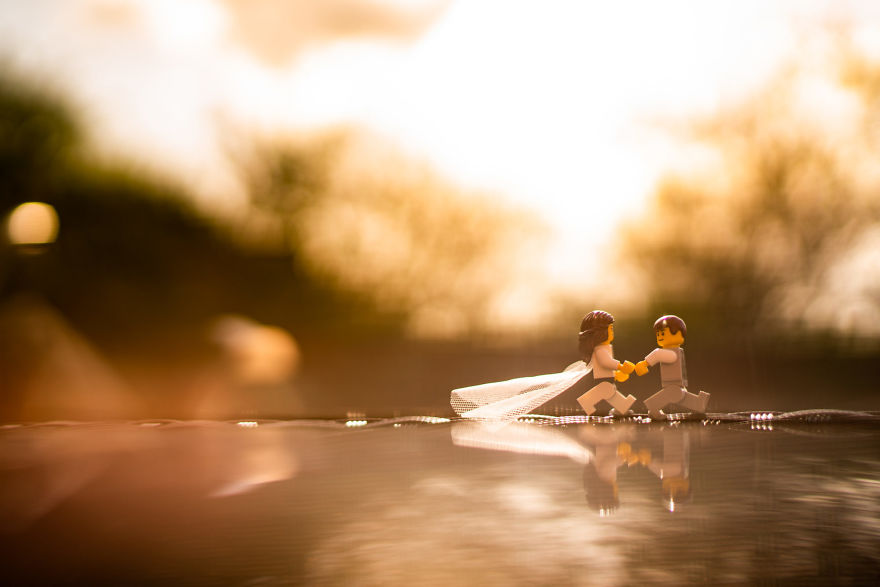 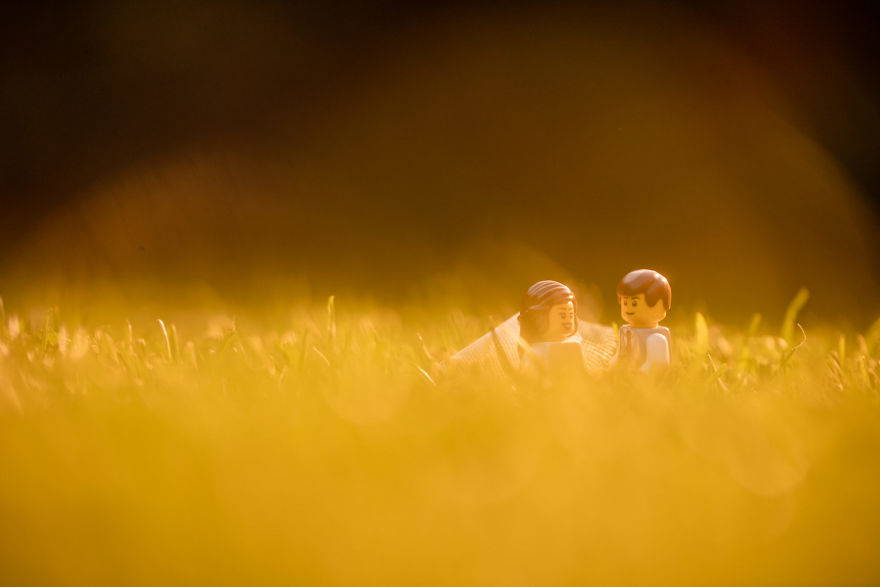 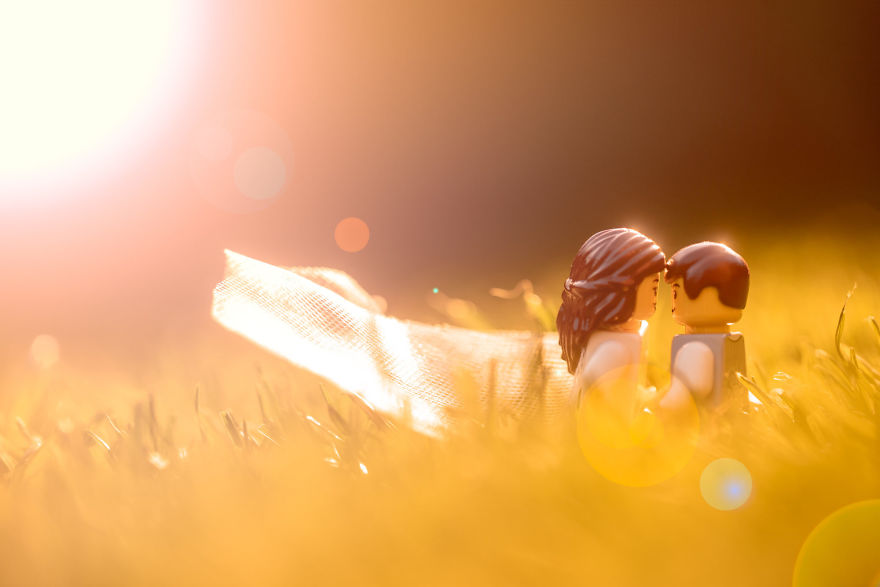 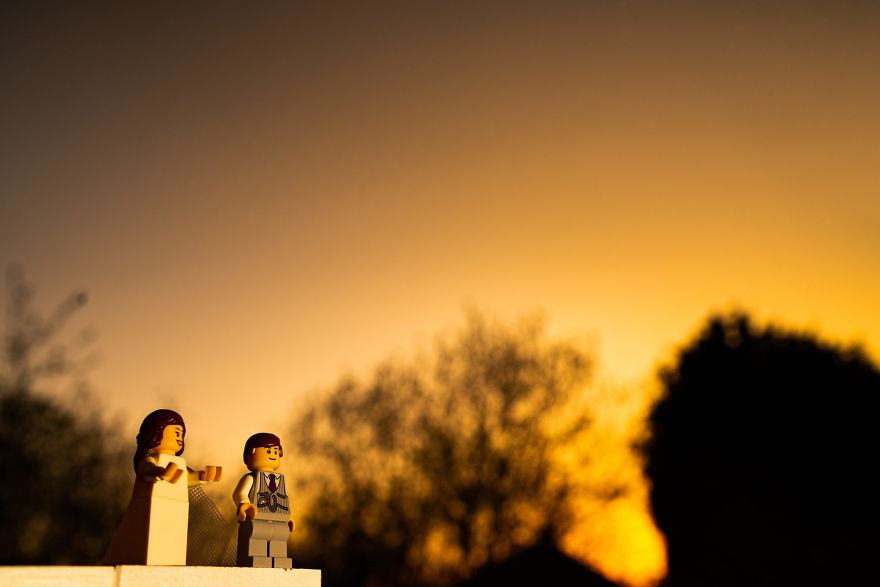 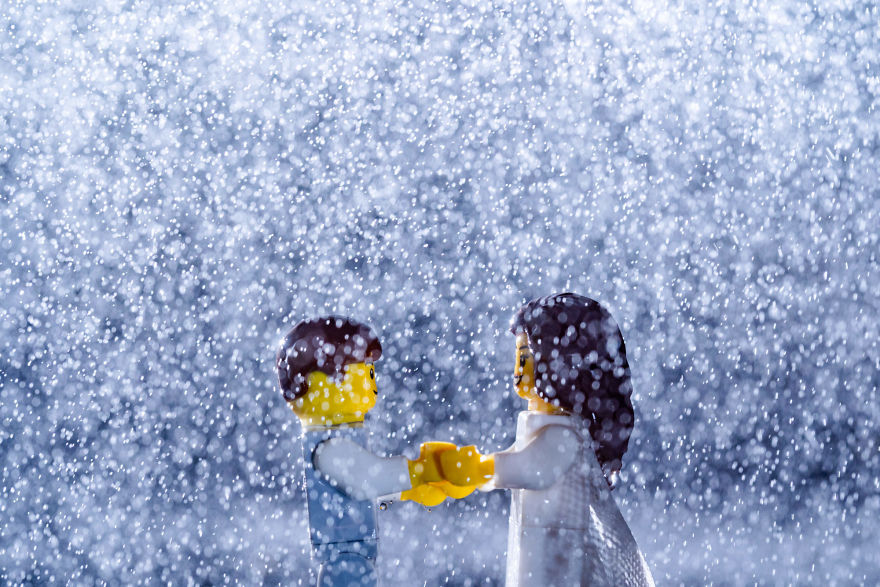 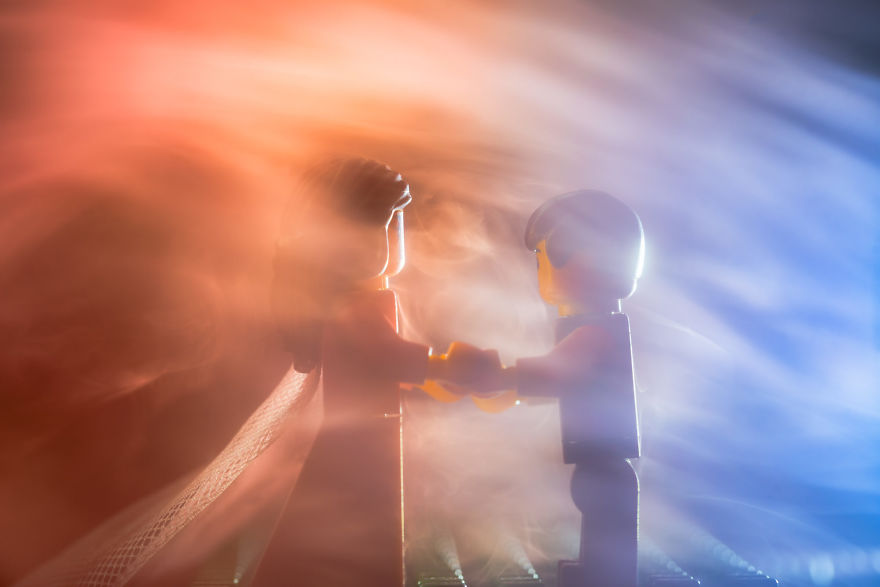 “We then headed back over to the venue for an amazing party, most guests had to sit out due to social distancing, but as you can see 4-5 people were up dancing, having a great time.” 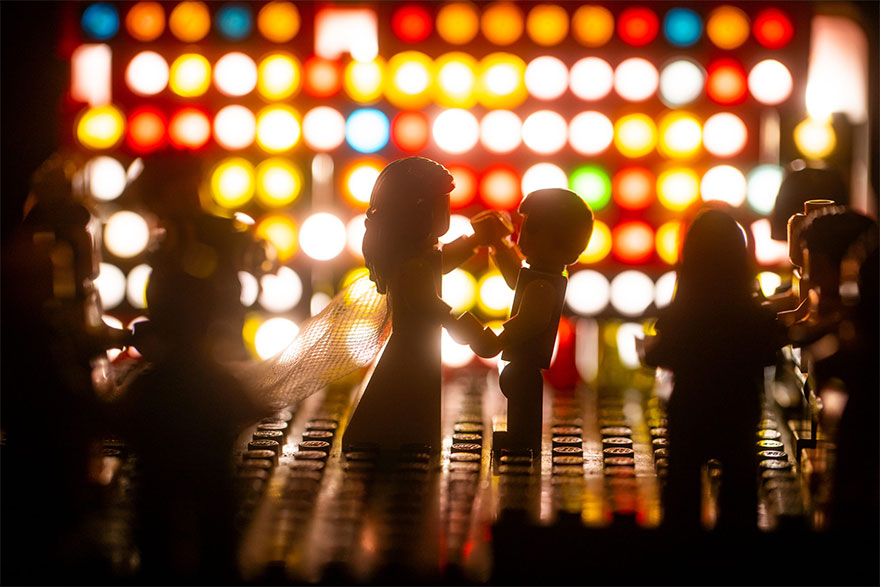 “As soon as the 5 people had stopped dancing, we were able to head back outside to enjoy some sparklers, but had to cut this short as a few guests caught fire and melted. Unfortunately, they couldn’t be saved, but made a funny wedding story to tell.” 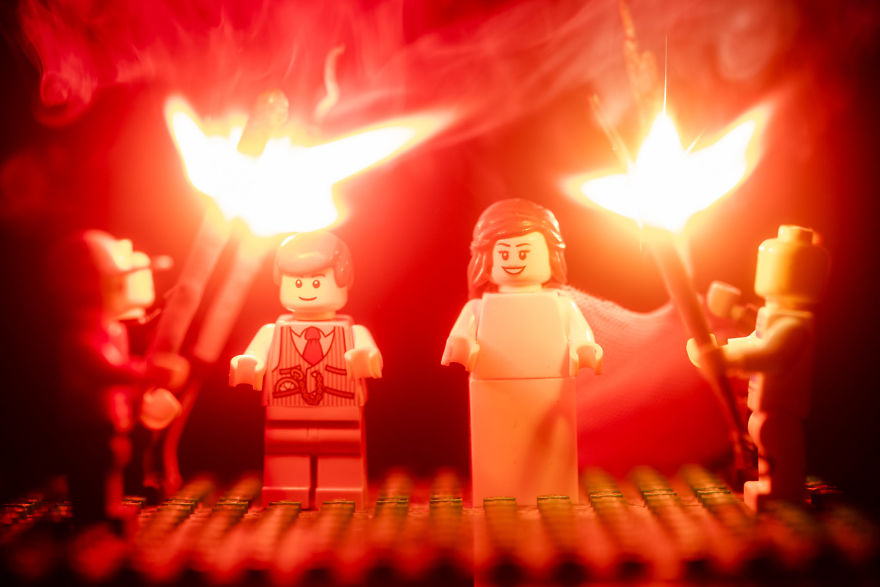 “Thanks so much to Florence & Fred for having me along to capture your special day, you were amazing to work with and Florence, hope your hair grows back after the sparkler incident. You were both so easy to work with and took direction very well!”

This Photographer Captured 130 Images Showing The Stunning Beauty Of Redheads
Shooting Under the Antarctic Ice
Total Strangers Who Could Actually Be Identical Twins
11 Stunning Colorized Photos Showing The Street Life Of Victorian London From Over 140 Years Ago
"Light": Beautiful Winning Images Of WildArt Photographer of the Year 2021
Australian Nikon-Walkley Awards 2016 Winners
Arnold Schwarzenegger Turns 69: Photo Tribute
2016 Wildlife Photographer Of The Year Winners
South African Leopard Catches Sandgrouse
Impressive Portraits of Grace Jones in the 1970s and 1980s
"Bubbleissimo", Photos of Dapper Men Sporting Beards And Mustaches Made Of Soap Bubbles
Gun Series Project by Toronto-based Photographers
Amazing Portraits of a Young Demi Moore in the 1980s
Publicity Photos Of Marilyn Monroe Playing The Ukulele For “Some Like It Hot” In 1959
31 Stunning Black And White Photos Of Europe In The Fifties Through A Soldier‘s Lens
Jaw-dropping Aerial Photography By Leah Kennedy
For the Record: Photography & the Art of the Album Cover
Karlie Kloss Heads to Brazil for Vogue US, July 2012
Awkward Metal Band Photos
Beyond: Artist Imagines Of What The World Will Look Like If Quarantine Doesn’t End
Animal Carnival in Rio de Janeiro
Photographer Spent 3 Weeks In Japan And Captured Cyberpunk And Noir Film Inspired Photographs
Completely Terrifying ‘The Last of Us’ Cosplay by Emma Franks
Breathtaking Underwater Photograhy By Tim Davis
LEGO, quarantine, wedding

You Have To See These Astonishing Photos Taken By A 14-Year-Old Boy
#HerWhite: Gorgeous Black And White Beauty Photography By Dmitry Bocharov
Beautiful Early Entries Of The 2020 Sony World Photography Awards
Taiwanese Elderly Couple In Their 80 Pose With Clothes Left Behind At Their Laundry Shop
'The Waiting Game' by Txema Salvans
This Egyptian Photographer’s Series on the Giza Pyramids is Absolutely Breathtaking
The Jaw-Dropping Photography by Kaiyhun
Olympus BioScapes Digital Imaging Competition 2012
Above And Beyond: The World's Best Drone Photography 2016 Winners
A Globe-Trotting Photographer Has Captured Some Of The World's Most Beautiful Roads
2007 ‒ 2023 by Design You Trust. Proudly hosted by WebHostingBuzz.
Privacy Policy · Terms of Service · Content Removal Policy ❤️ 🇺🇦