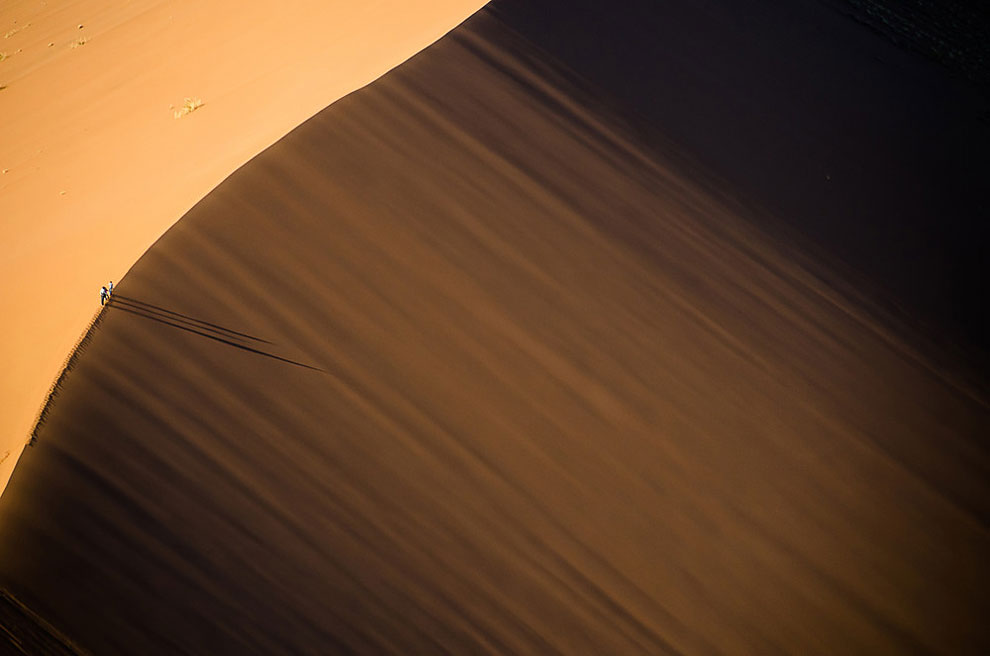 “On the edge”. People walking on the edge of a dune in the Namib-Naukluft Park. Photo location: Namibia, Africa. (Photo and caption by Angiolo Manetti/National Geographic Photo Contest) 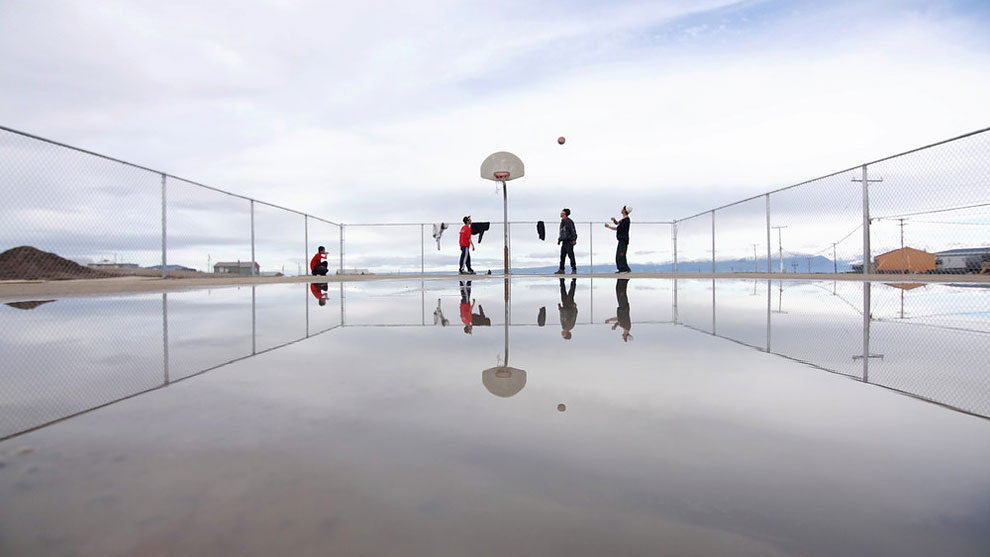 “The Arctic League”. The brand new basketball court in Pond Inlet, Nunavut sees action just after a rain. The playing season is short with only three months of the year in the pluses. But, with 24-hour daylight, games go long and late. Photo location: Pond Inlet, Nunavut, Canada. (Photo and caption by Chris Paetkau/National Geographic Photo Contest) 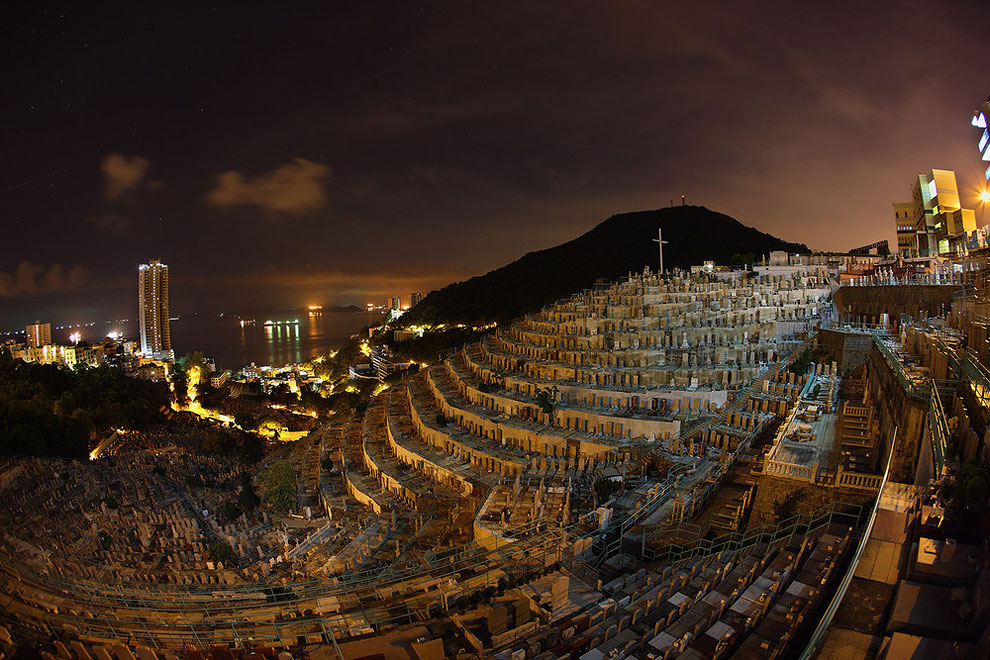 “Dead quiet”. It’s well past mid night and this densely packed neighborhood is dead quiet. It’s one of the largest Christian cemetery in Hong Kong. In Hong Kong land is scarce, when you’re alive you live in tiny little pigeon holes, when you’re dead, it doesn’t get much better. Photo location: Hong Kong. (Photo and caption by Brian Yen/National Geographic Photo Contest) 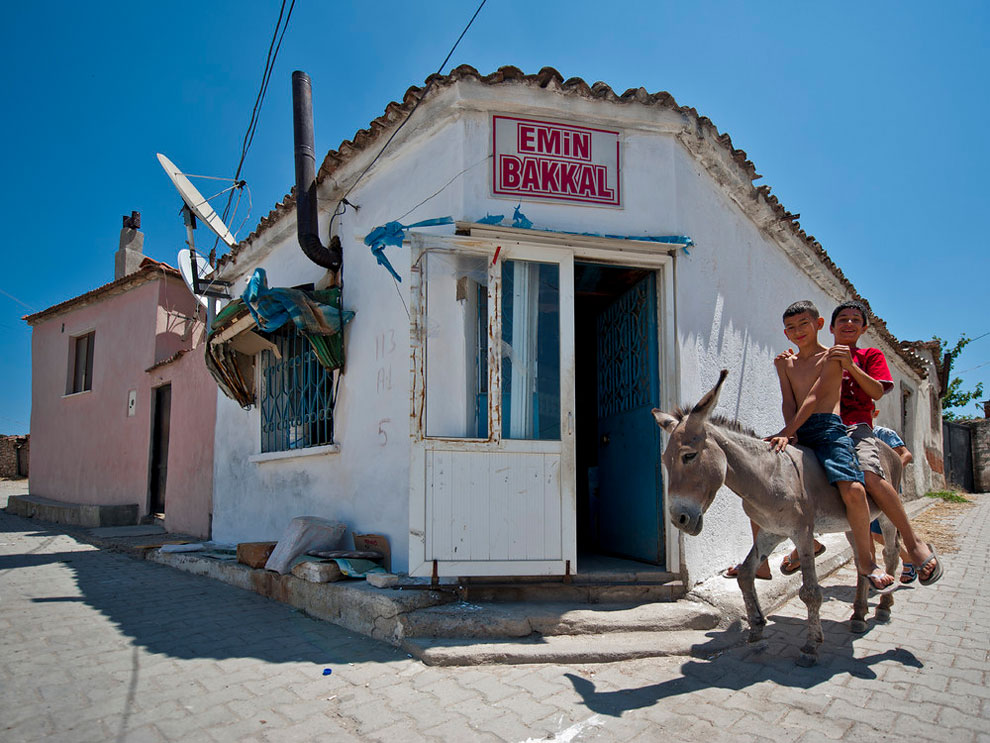 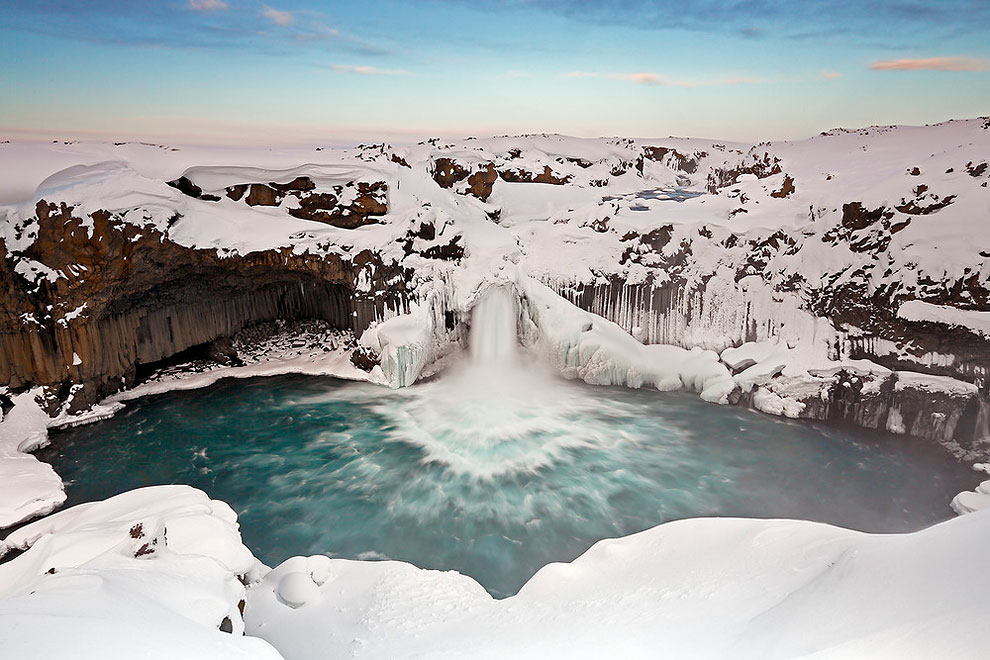 “The Cathedral”. I dreamed of shooting the best waterfalls in Iceland just before the spring snowmelt. Towards the end of winter I only could reach Aldeyjarfoss waterfall by using a super jeep and a snowmobile. Once there I could enjoy one of the most striking views in all Iceland. The river Skjálfandafljót flows under the ice sheet and jumps over a magnificent wall of hexagonal basalt columns which reach twenty metres in height. The powdery blue of the water on the turbulent plunge pool at the base of the waterfall attest to the glacier origin of the watercourse. Photo location: Valley of Bárðardalur, Iceland. (Photo and caption by Cristobal Serrano/National Geographic Photo Contest) 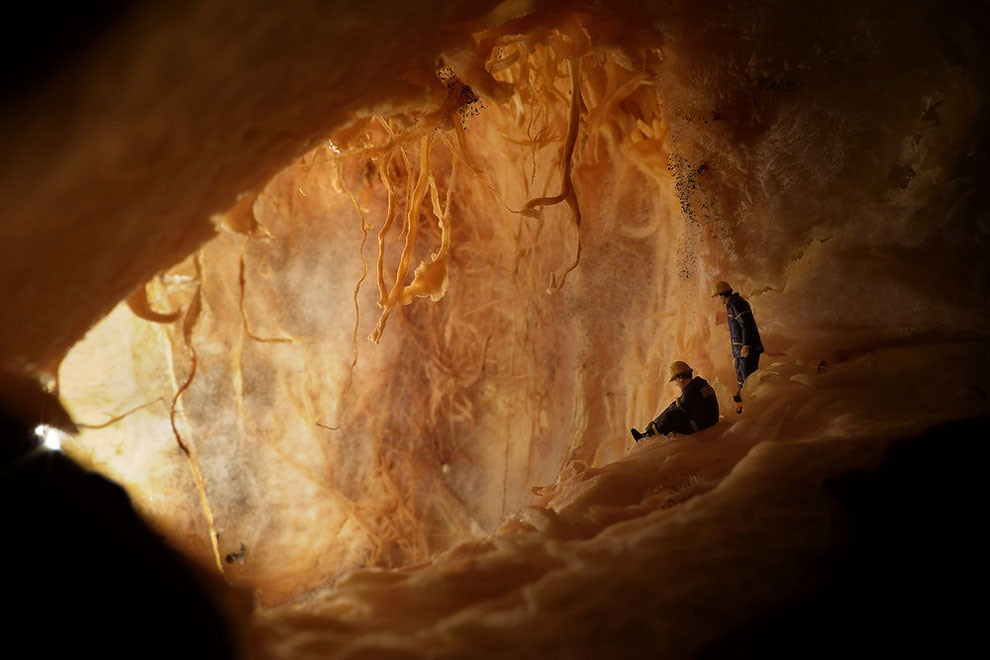 “The Krubera Pumpkin Cave”. Standing on the entrance to the famous Kurbera Pumpkin Cave. The deadliest pumpkin cave known to man. I took my last shot before entering. The legendary cave have claimed countless explorers, I heard it even includes several from National Geographic. No one has ever gotten out a live. Ok, ok… it’s just two little figurines inside a mouldy pumpkin, but hey, I live in Hong Kong, I don’t have many caves to explore. Photo location:Dinning table . (Photo and caption by Brian Yen/National Geographic Photo Contest) 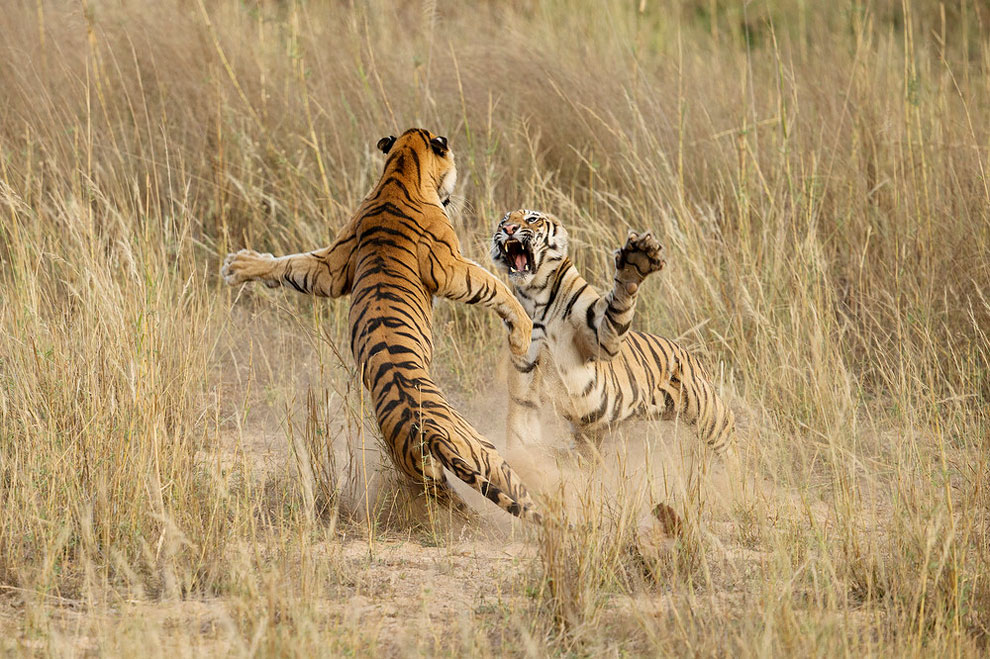 “Muscle power”. This playful fight amongst two young sub adult Tigers was indeed a brilliant life time opportunity, that lasted exactly 4-5 seconds. The cubs were sitting in the grass as dusk approached when suddenly one of them sneaked up behind the other and what happened next is captured in this image. This playful fight amongst the siblings is what prepares them for their survival in the wild. The sheer power of the Tiger is beautifully captured in this image and portrays the sheer muscle power that these magnificent cats possess. Photo location: Bandhavgarh National Park, Madhya Pradesh, India. (Photo and caption by Archna Singh/National Geographic Photo Contest) 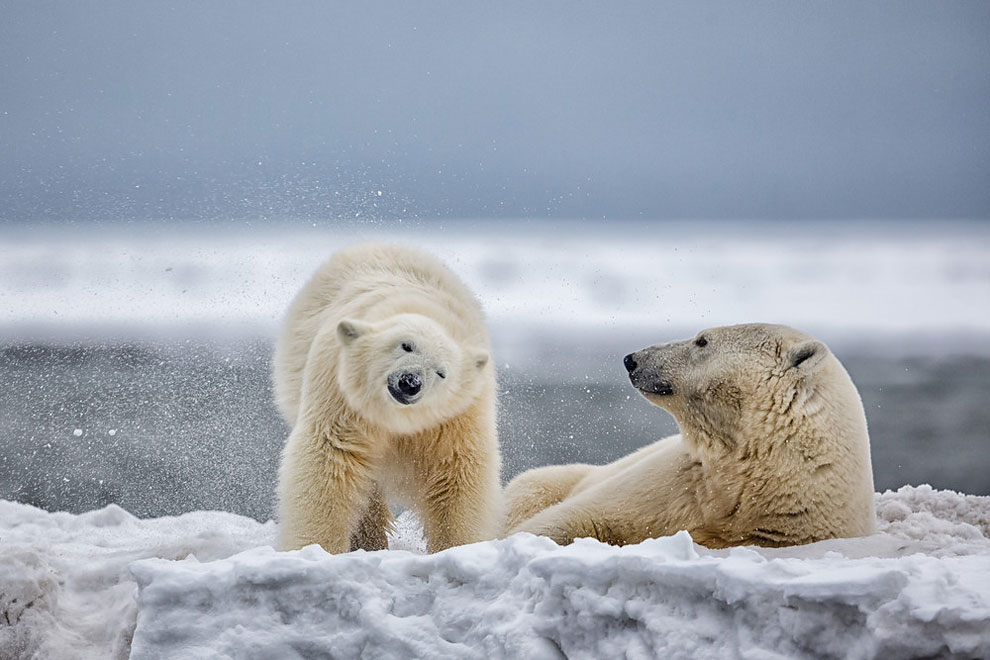 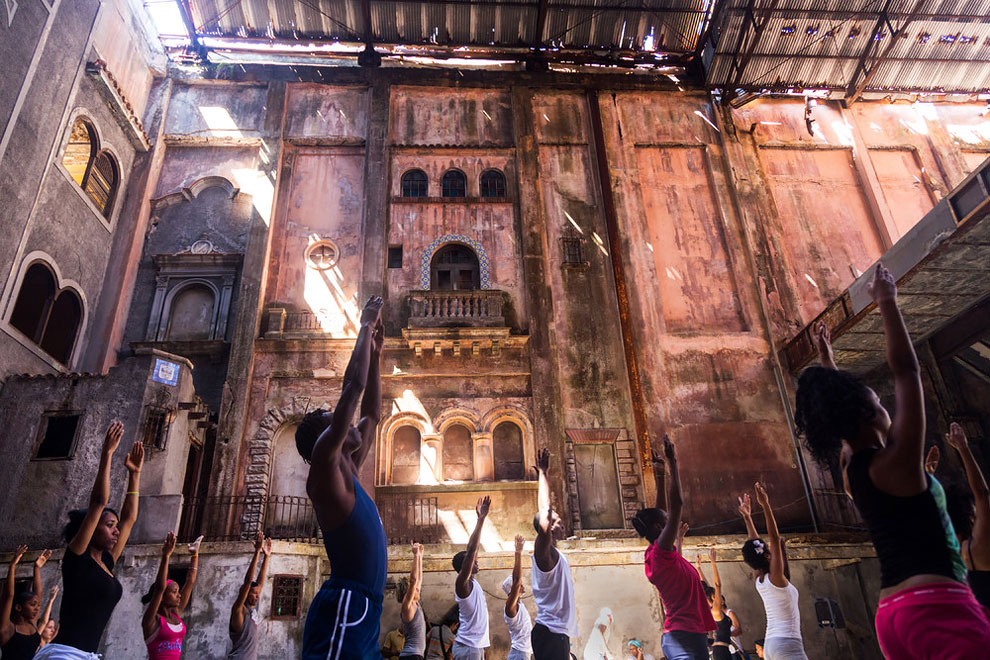 “Reach for the Stars”. This grand but weathered theatre in Havana, Cuba now serves as a dance studio for local dancers. The rough condition of the building is obscured by the obvious beauty behind the dust and the life and energy of the dancers within this space. Photo location: Havana, Cuba. (Photo and caption by Jerry Breaux/National Geographic Photo Contest) 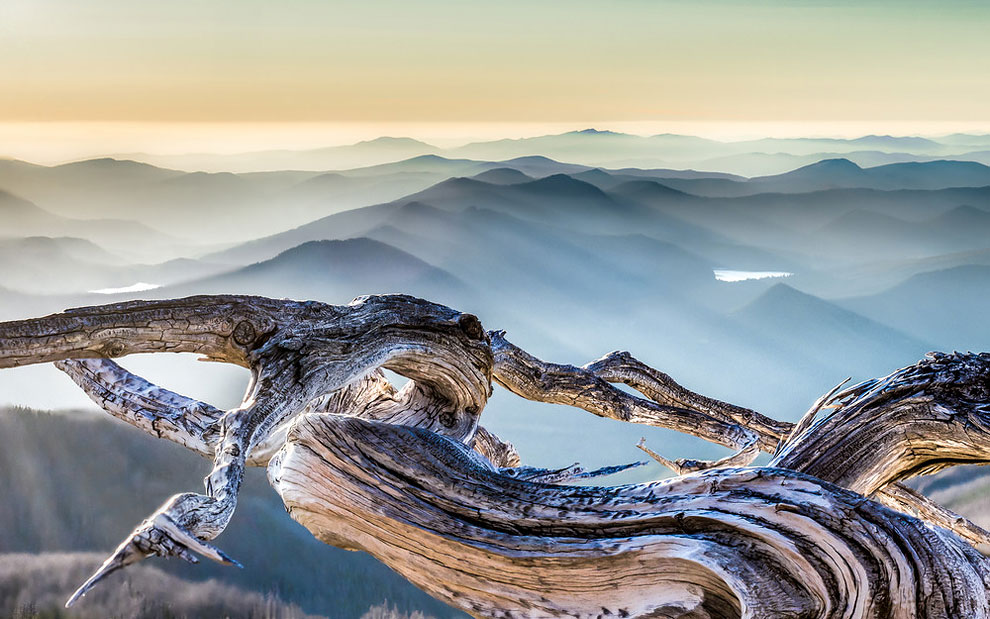 “Whitebark Pine – Smoky Hills”. This photo, taken on the north side of Oregon’s Mt. Hood thirty minutes before sunset, shows a portion of a dead whitebark pine (Pinus albicaulis), an endangered tree that grows at high elevations across North America. These trees survive heavy snow loads and high winds by growing in mats low to the ground. Ironically it is only when they have died and shed their needles that the stark beauty and sinuous grace of their limbs are revealed. The hills in the background are bathed in smoke from the many fires that were burning across Oregon at the time. Photo location: North side of Mt. Hood, Mt. Hood Wilderness, Oregon, USA. (Photo and caption by Paul C. Glasser/National Geographic Photo Contest) 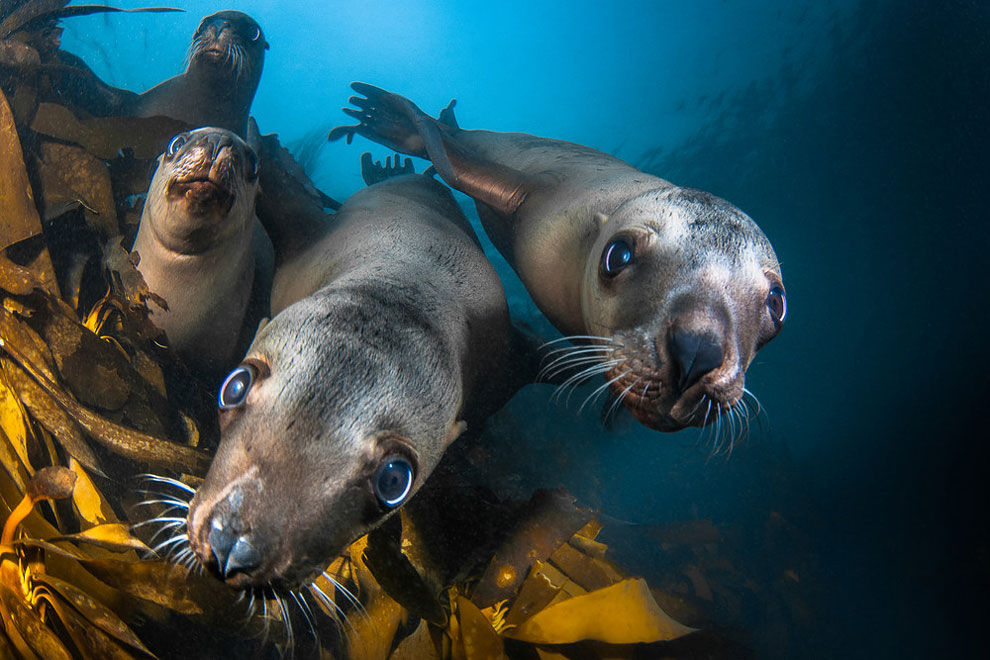 “Hide and seek with Steller Sea Lions”. Jumping in the Vancouver Island water was an exciting and challenging experience!! The Temperature was 4°C, strong current and bad visibility. In the kelp forest which surrounds the Rocks, the atmosphere was worrying : diving conditions were tough and it was very dark at only 15 meters deep. As I could feel some shadows moving and observing me, I decided to stop moving hopping to arouse the curiosity of the pinnipeds. After a while, they became more and more confident and came out the kelp to interact with the dôme of my underwater camera, trying to nibble my fingers. Photo location: Race rock, Vancouver island, BC. (Photo and caption by Gregory Lecoeur/National Geographic Photo Contest) 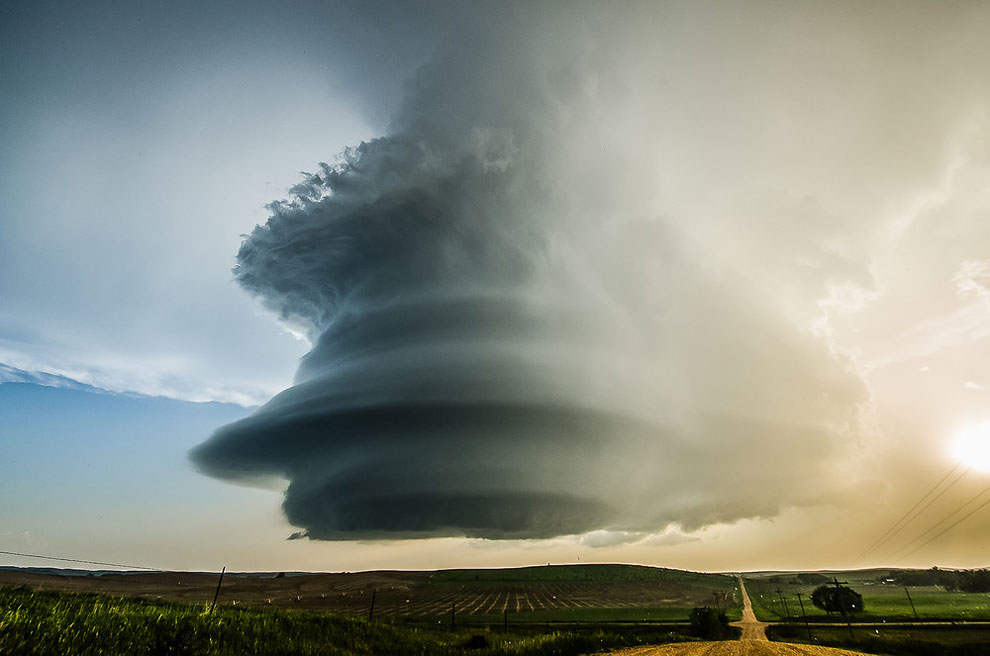 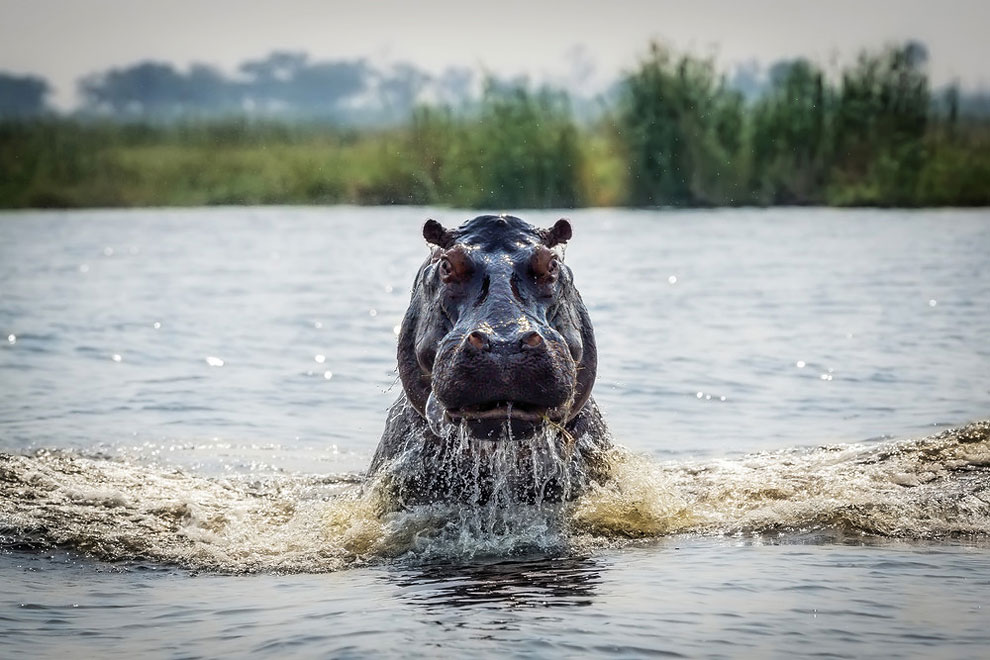 “Hippo Chase”. As we approached the camp the Selinda Reserve of northern Botswana our boat passed by a hippo resting in the water. I turned around to look back at the boat’s wake and saw the hippo charging after us! The hippo must’ve been tired from an all-nighter because he was angry. He rose way up out of the water three times trying to chase our boat! He was coming at us with such force that he created a wake of his own. Photo location: Selinda Reserve of northern Botswana. (Photo and caption by Curtis Simmons/National Geographic Photo Contest) 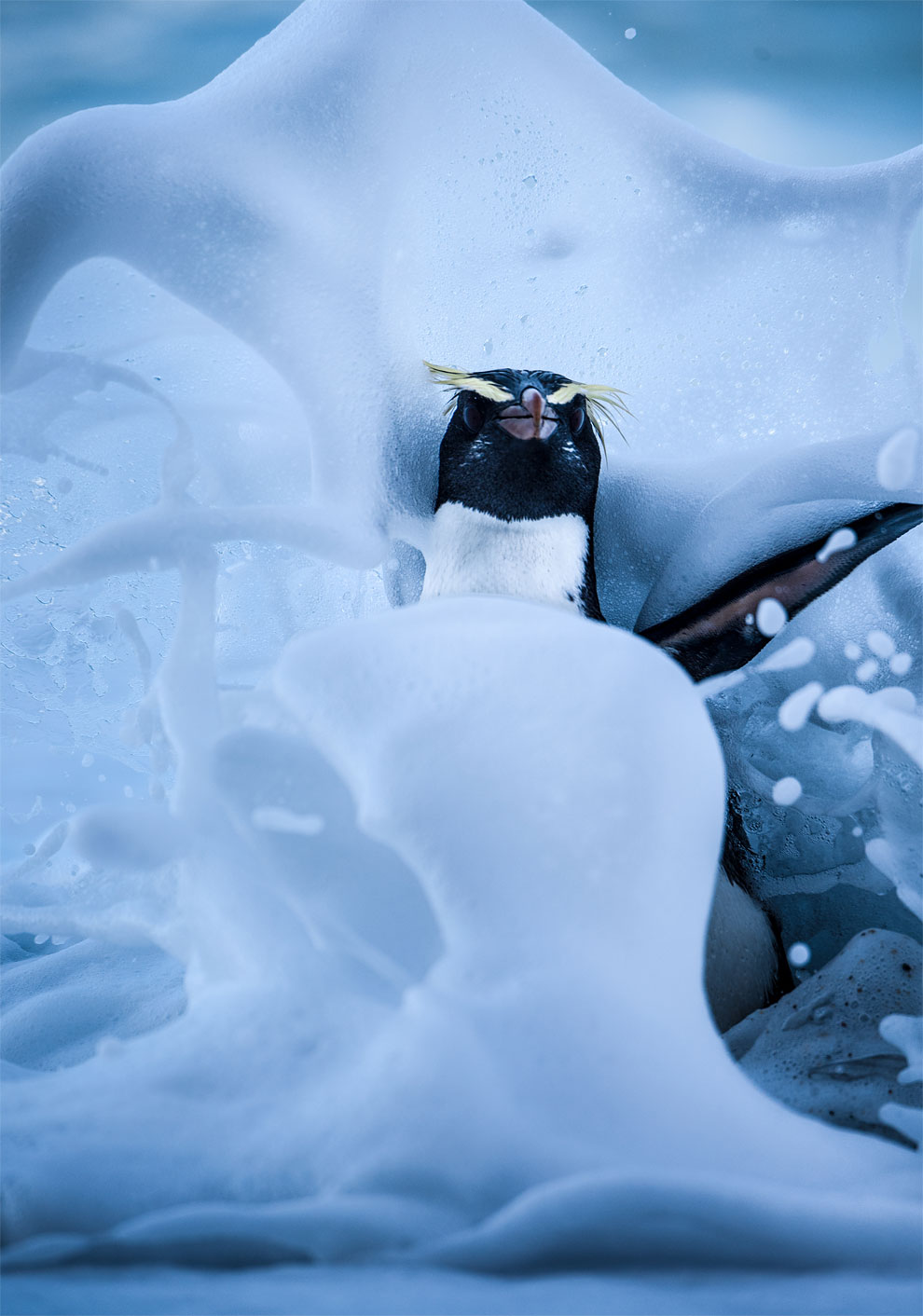 “Crashing home”. Less than 2,500 breeding pairs of the Fiordland penguin exist in the world and are are unique in that they breed and nest north of the subtropical convergence, in the temperate rainforests of New Zealand’s rugged southwest coast and its outlying islands. Coming back to shore is generally not an easy task, with the penguins (often in pairs) spending up to an hour simply trying to judge the safest time to land between the crashing waves. This penguin didn’t judge this as well as some others, but did eventually make it to shore safely. Photo location: Fiordland, South Island, New Zealand. (Photo and caption by Douglas Gimesy/National Geographic Photo Contest) 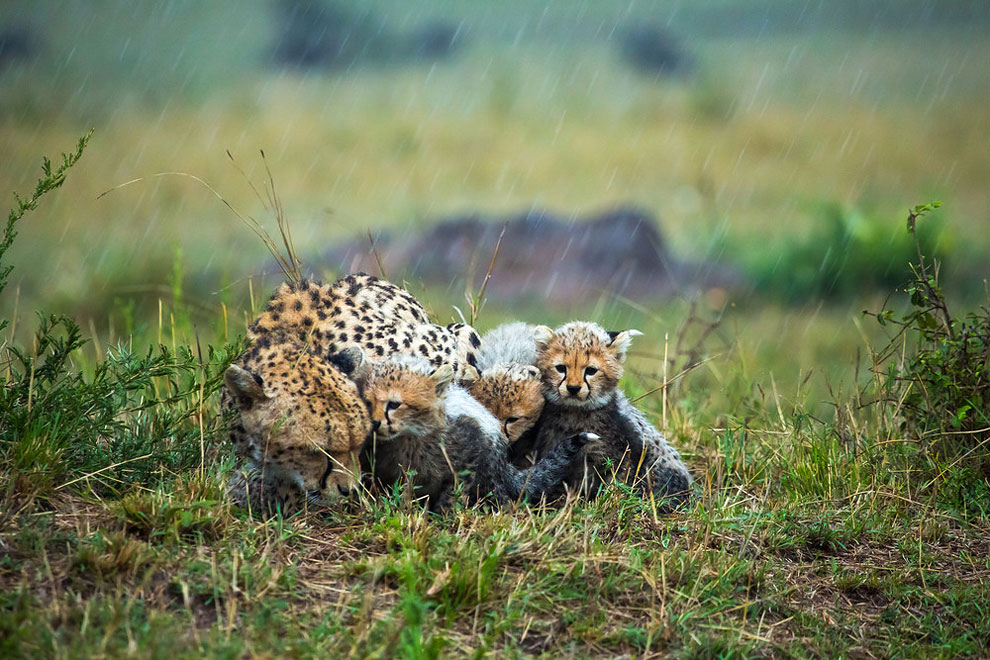 “Weather Together”. A cheetah and her cubs huddle together for warmth during one cold evening downpour. Photo location: Maasai Mara Reserve, Kenya. (Photo and caption by Zestin Soh/National Geographic Photo Contest) 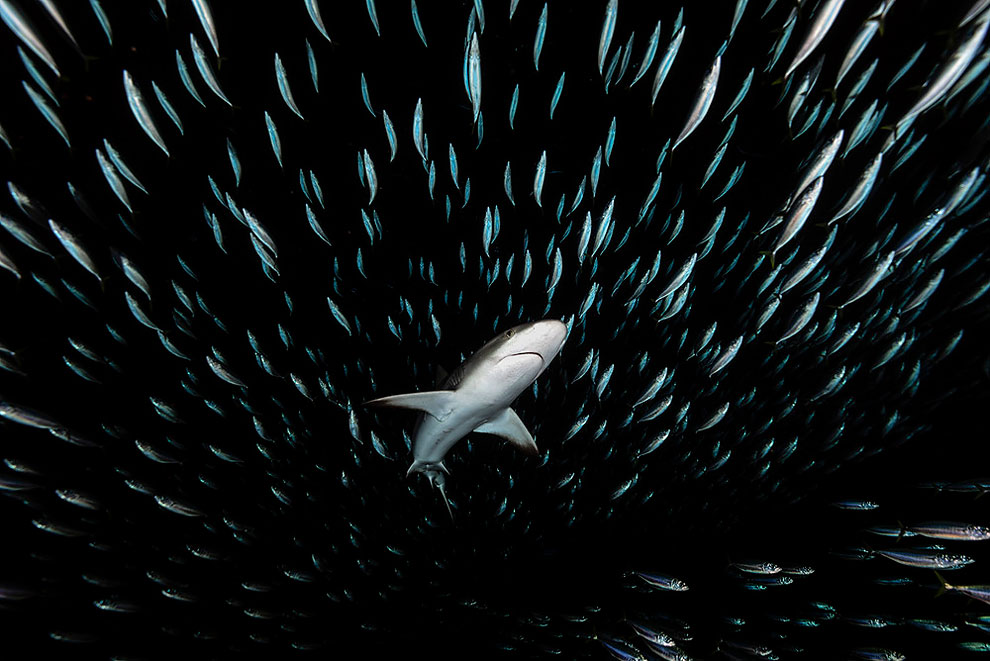 “Star wars shark”. By night, in the pass of some atoll of french Polynesia, sometime many thousand of mackerel jackfish came out of the lagon to join the ocean. A few grey reef shark hunting in this huge school. They are exiting by so many prey. I dream of this photo in my mind since a long time. I need the shark came over my head, among the jackfish. I must be discreet. The fish are afraid by the light of my torch, and they move away from me. But i need torch, i was in the darkness and my camera can’t do the focus without it…. not so easy! Photo location: Fakarava atoll, French Polynesia. (Photo and caption by Vincent Truchet/National Geographic Photo Contest)

Internet K-hole: the Best Photo Blog You've ever Seen!
Stunning Pink Landscapes Of The Deadly African Congo
Russian Firefighters Have Released The Most Stunning 2017 Charity Calendar
An Extraordinary New Family of Spiders from Caves in the Pacific Northwest
Photographer Helps Women Get Rid Of Insecurities By Photographing Them Like Celebrities
Angelina Jolie at 1995 Marcel Indik Photoshoot
“Beauty Warriors”: Fine Art Portrait Photography By Evija Laiviņa And Her Powerful Message For Our Society
Smithsonian Wilderness Forever Photo Contest
Natural And Authentic Female Portraits By Tony Andreas Rudolph
That Time When Nirvana Dressed Up In Woman Clothes For Mademoiselle Magazine In 1993
This is the End... Bitch!
Miss Ukraine 2012
A Batman Engagement Shoot: Crystal and Darren
"The Lonely Astronaut": Melancholy Photography Series by Karen Jerzyk
The Miracle of Birth
Spectacular Winning Photos from The 2020 Spotlight Photography Awards
Rare Photographs of a Very Young Diego Maradona From the Late 1970s and Early 1980s
Some Entries For 2016 National Geographic Travel Photographer Of The Year Contest
Every Spring This Forest In Belgium Becomes A Blue Wonderland
The Bedouin Skate Crew in Tunisia
Kate Moss for Vogue US, April 2012
Photographer Reveals What Tricks He Uses To Get Interesting Photos In 30 Examples
Magical Photos Of China Taken By The US Photographer Tristan Zhou
Inside Fukushima Daiichi: First Tour of Wrecked Nuclear Plant Since Disaster
Amazing Colorized Photos Show What Kitchens Looked Like In The First Half Of The 20th Century
Uggie the Dog Leaves Paw Prints in Hollywood, Bids Goodbye to Acting
Stunning Finalists Of The 2021 World Report Award
The Best Photography Of Pokémon Go
Photographer And Her Friends Reclaim Their African Roots In Visually Striking Portraits
A Collection of Fabulous Potato-Themed Real Photo Postcards From the Early 20th Century
contest, geographic, national, photo