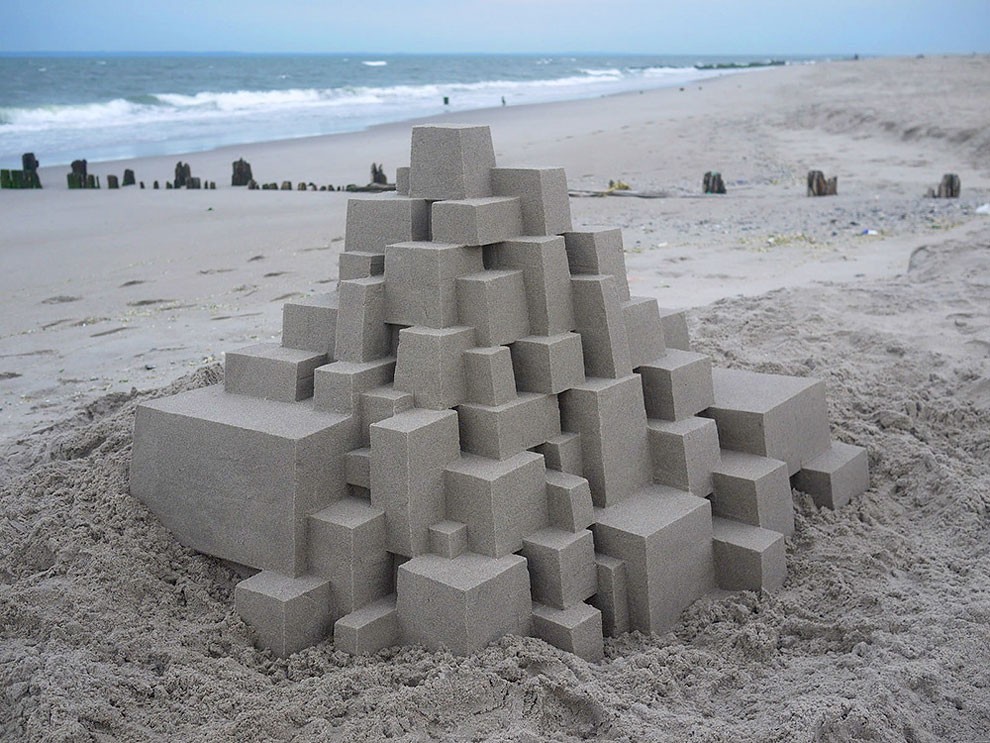 When it comes to sandcastle construction, most people focus on the basics — a motte, a bailey, maybe a keep and a moat. New York artist Calvin Seibert, on the other hand, has bigger ideas. 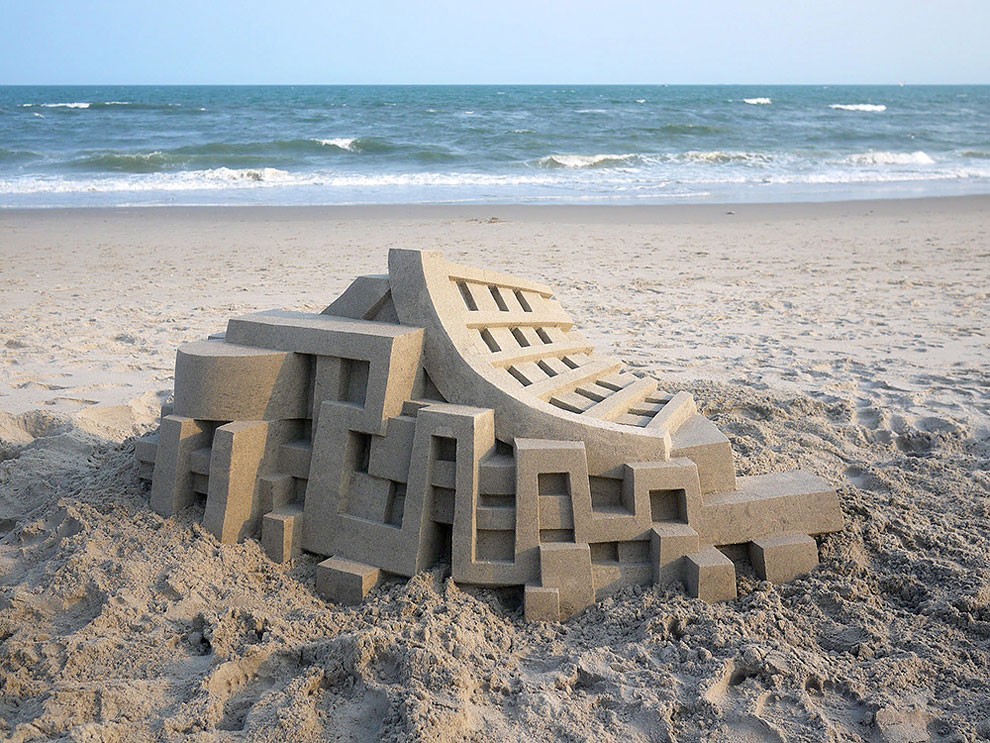 Inspired by the brutalist buildings of Marcel Breuer and the neofuturist designs of Eero Saarinen, Seibert creates impossible structures marked by sharp geometry and tessellated patterns. His striking sandcastles would be more at home in a survey of architectural feats than on the shores of an American beach. 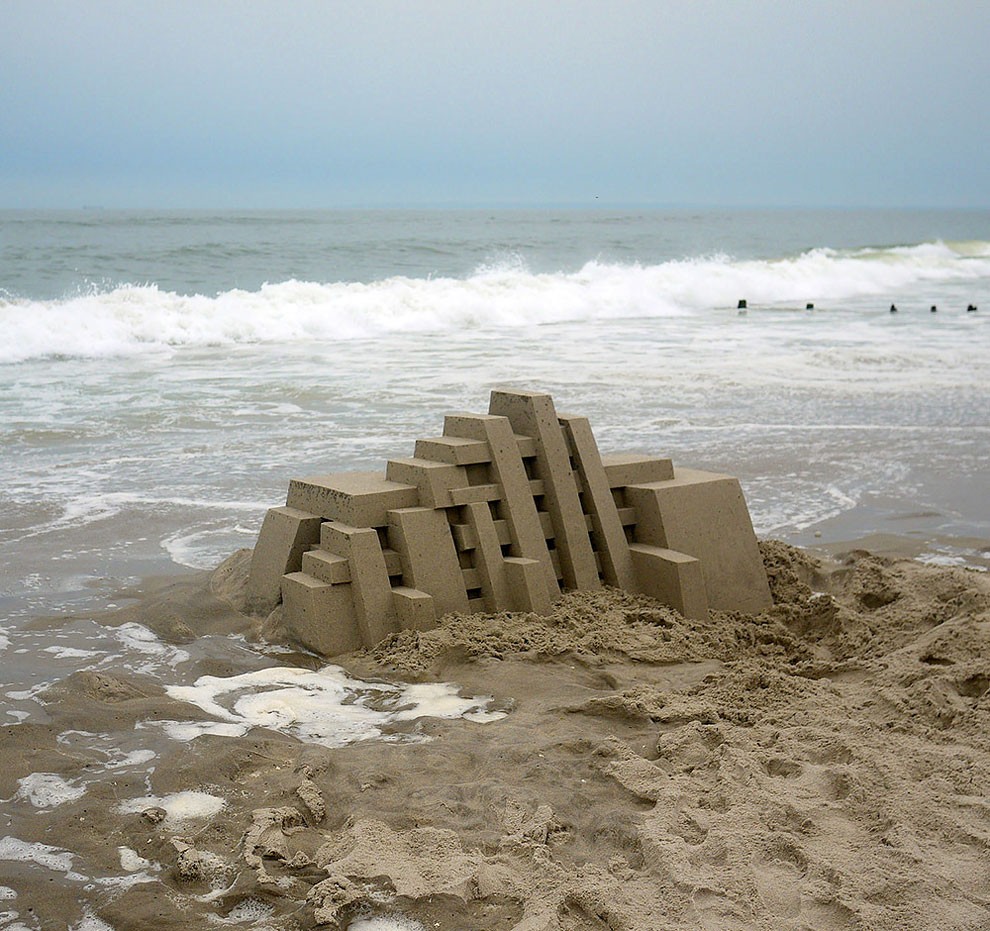 Seibert forms his shapes by hand, using an assortment of rectangular plexi trowels he makes himself, packing and trimming until his designs take on their sharp edges. At 57 years old, he’s been working in the sand for five decades, he says, transitioning from the sand pile constructions of his childhood trips to Colorado to his adult artworks on the beaches of New York, Hawaii, California and Texas. 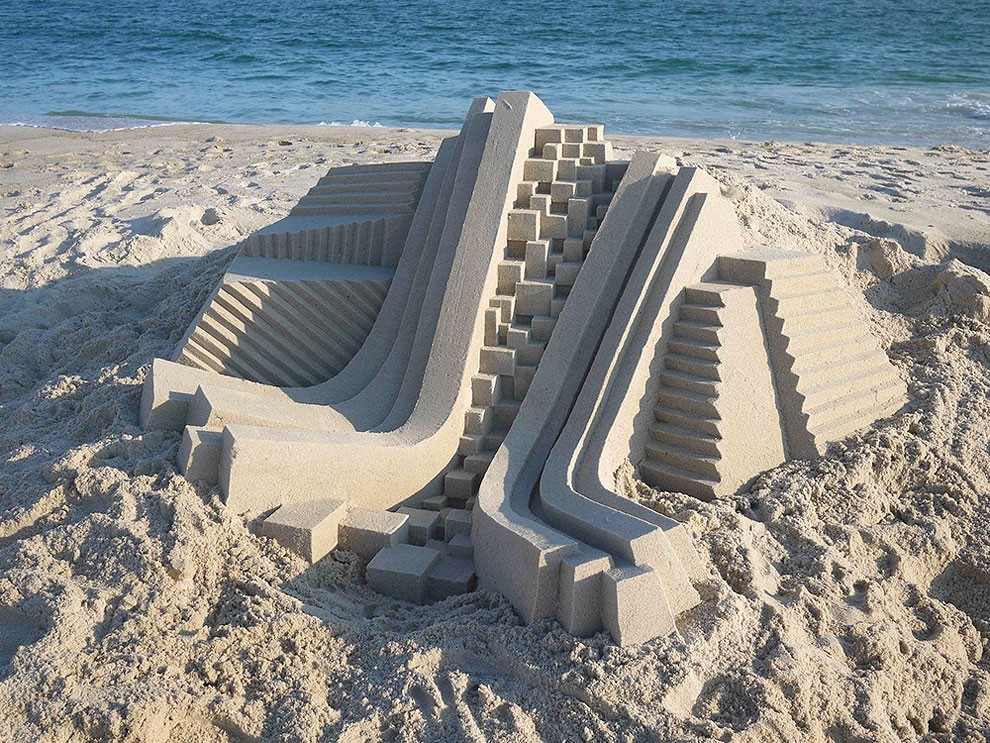 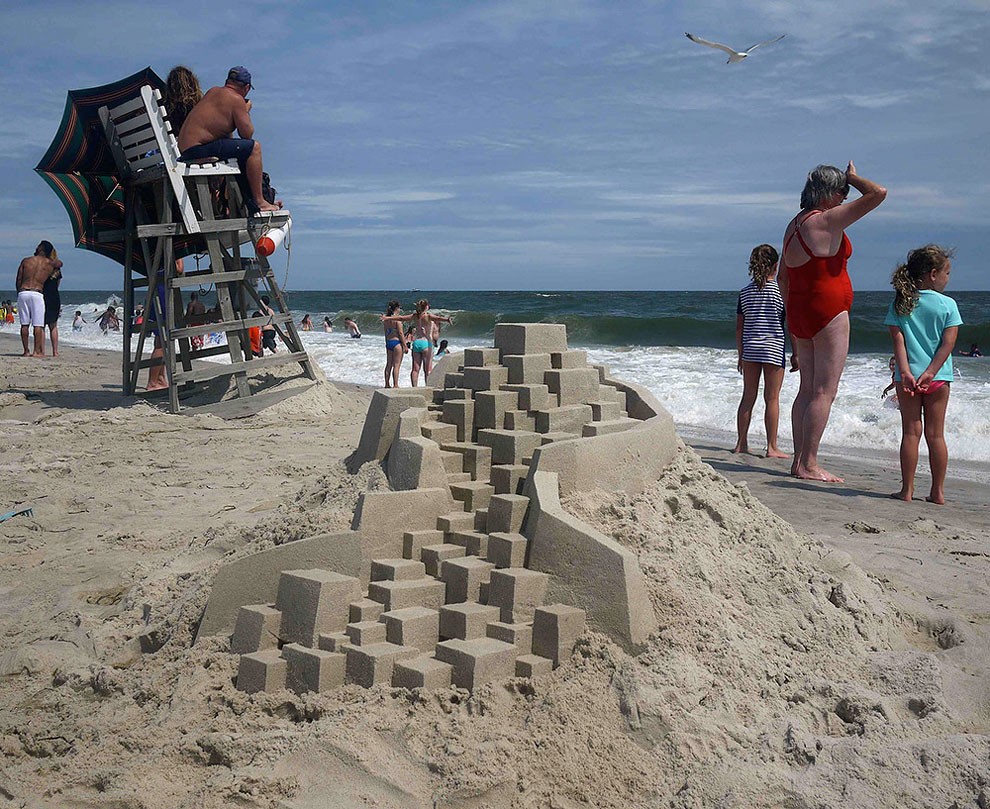 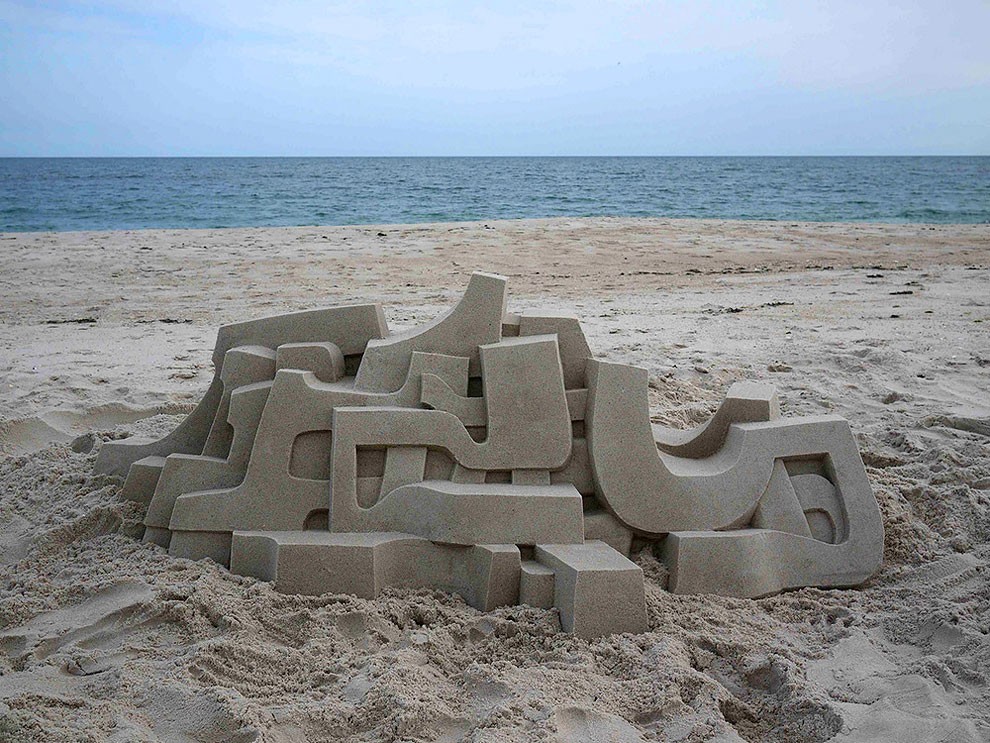 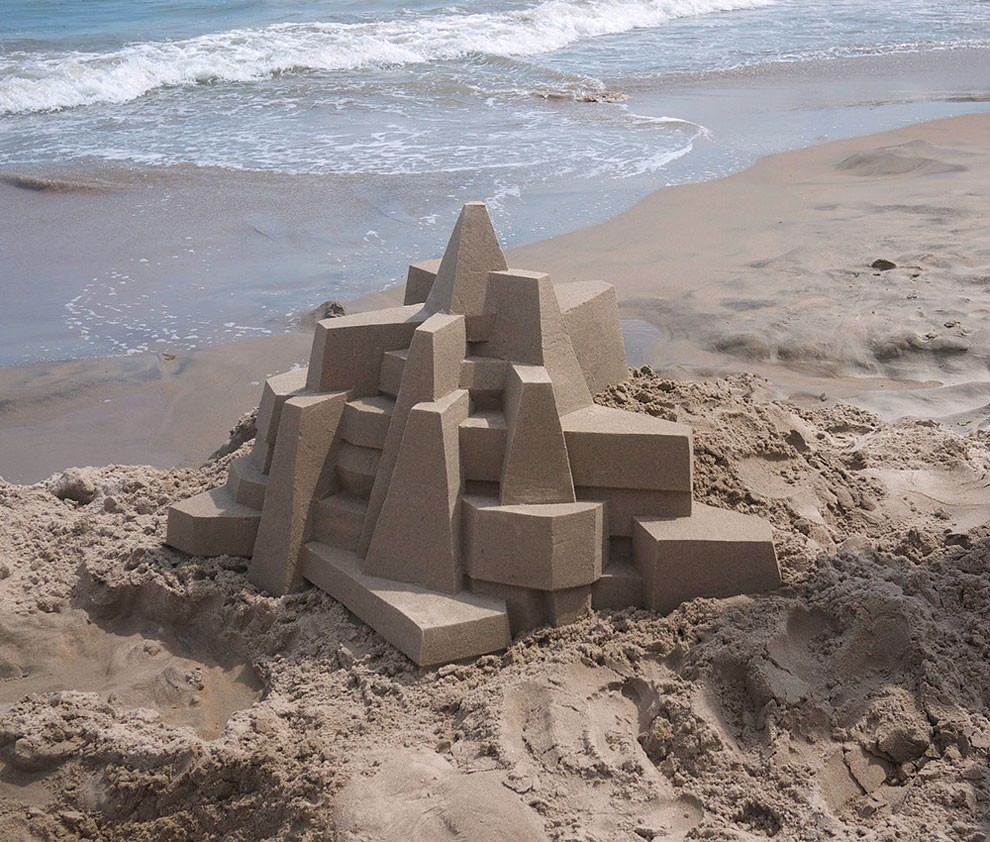 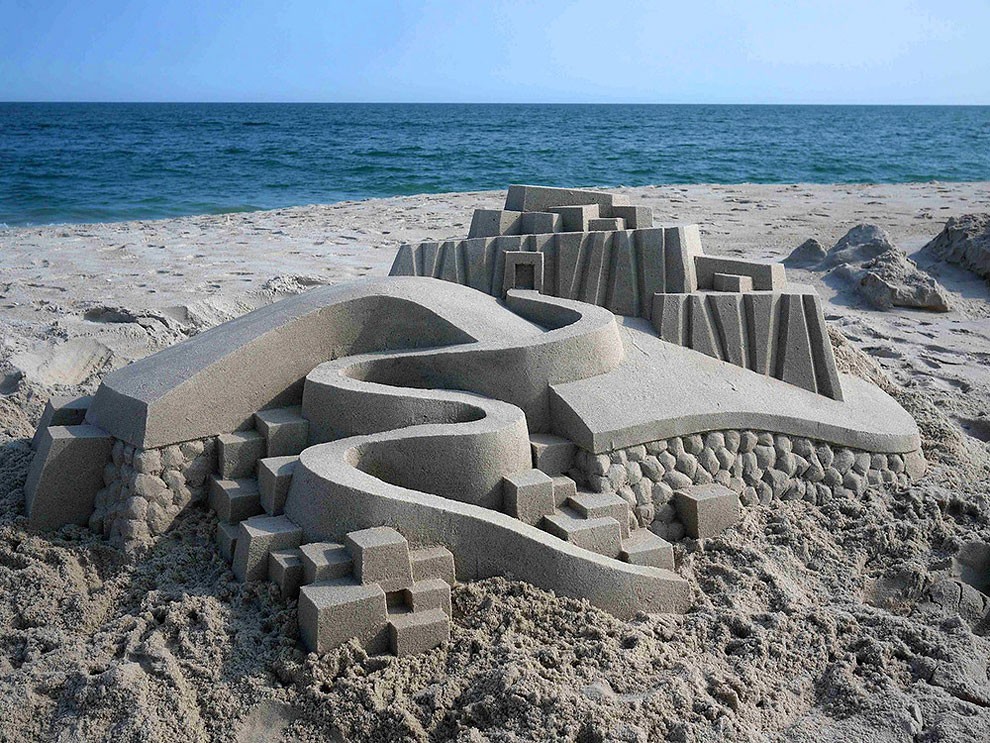 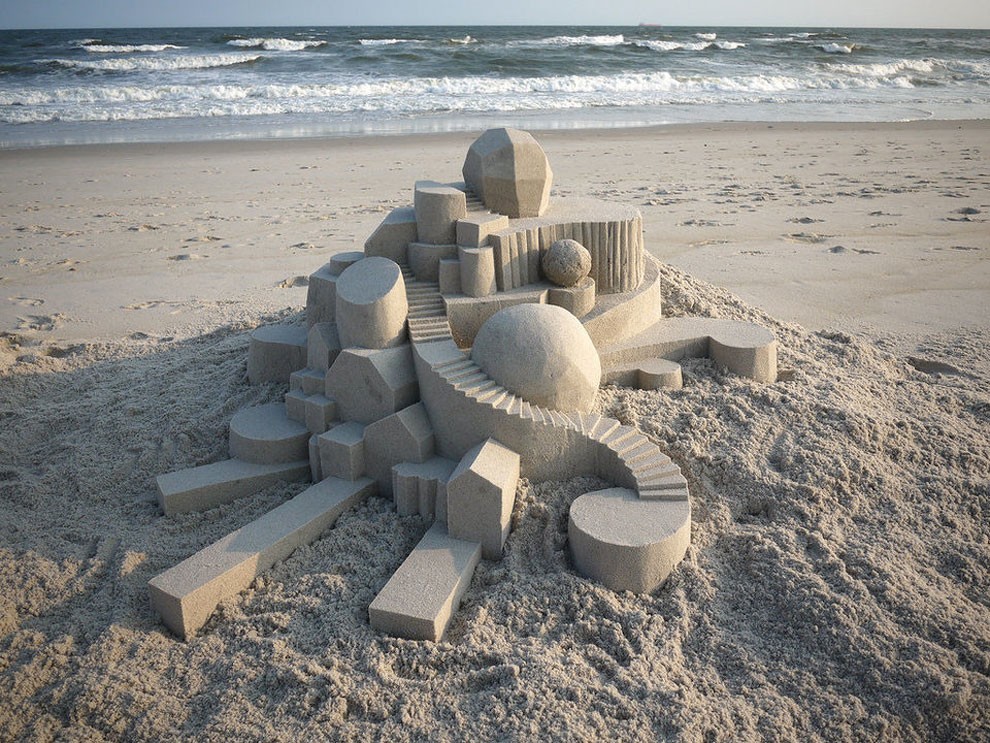 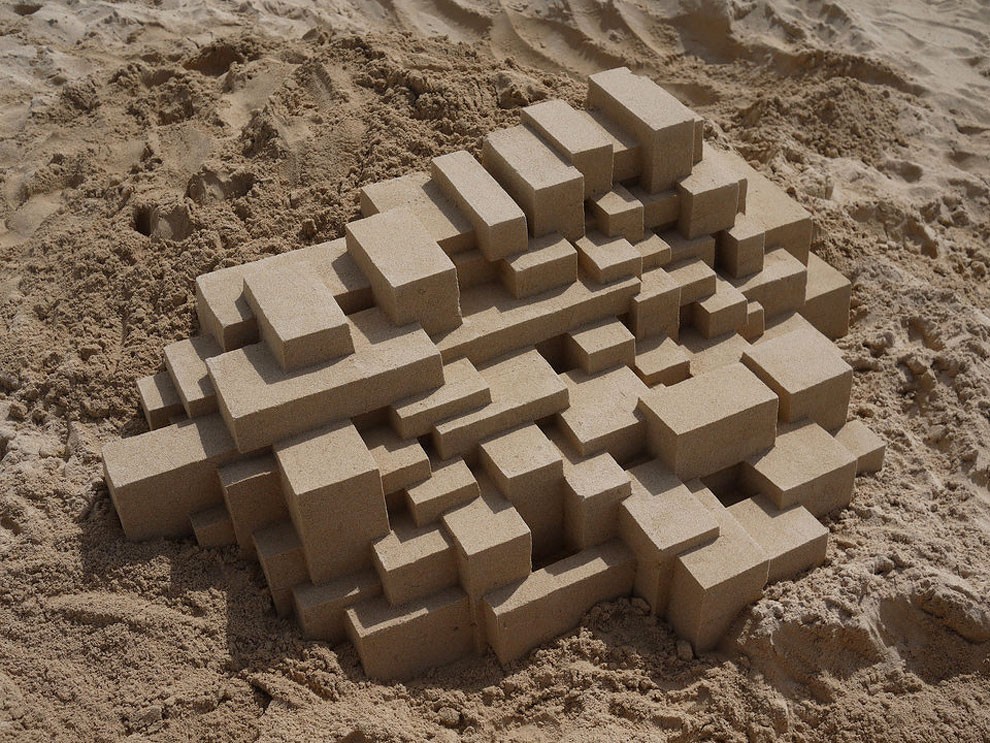 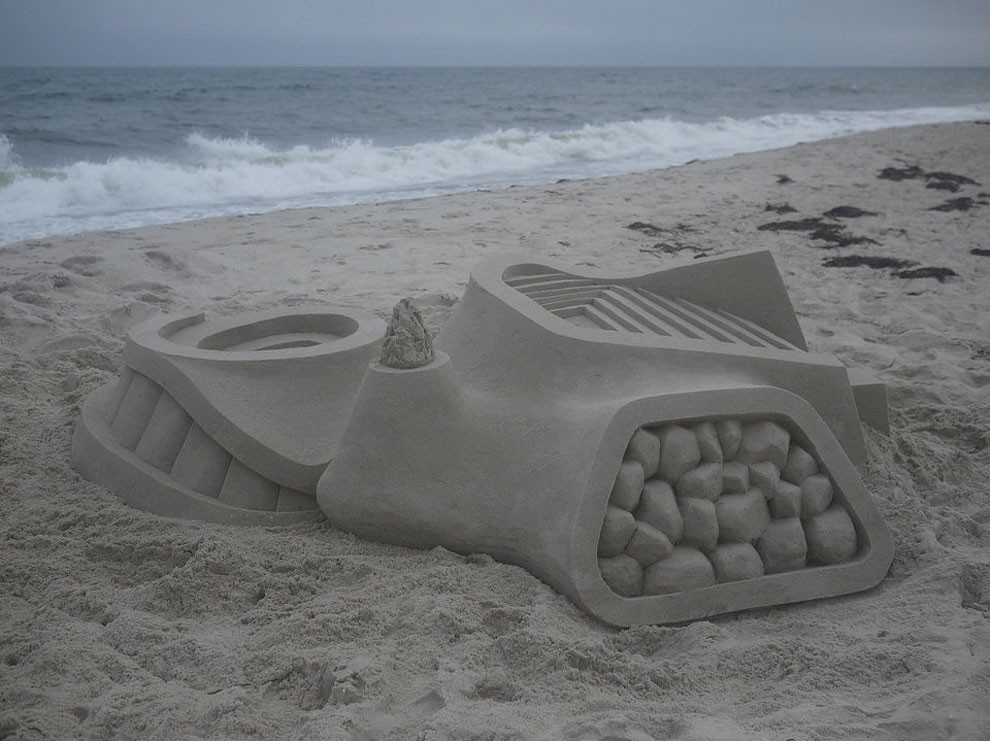 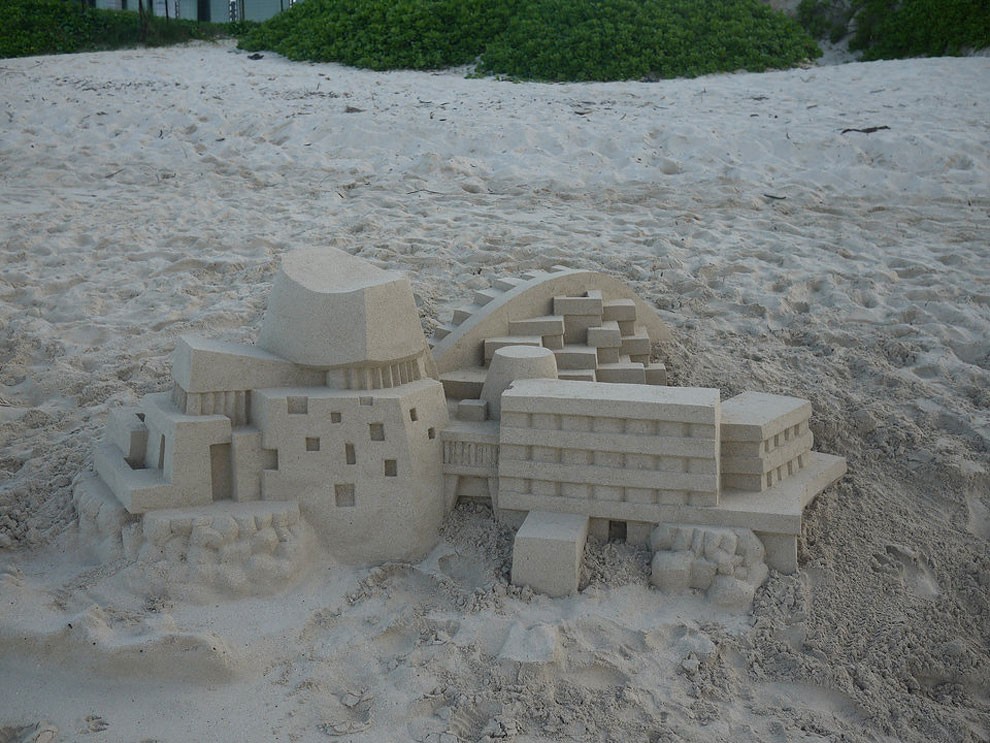 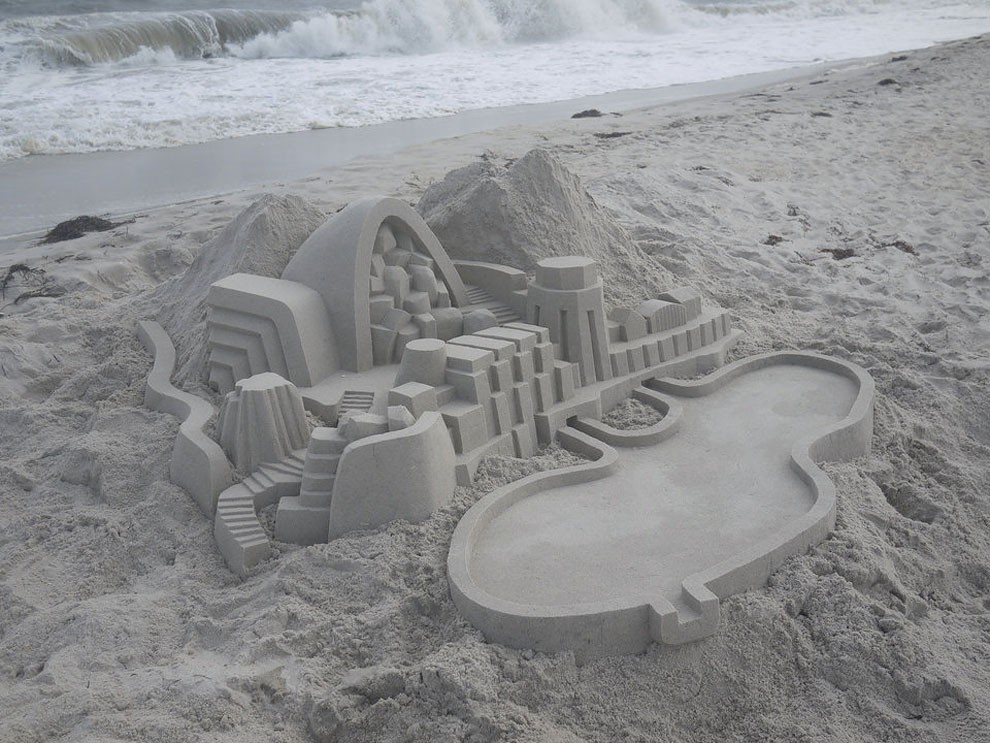 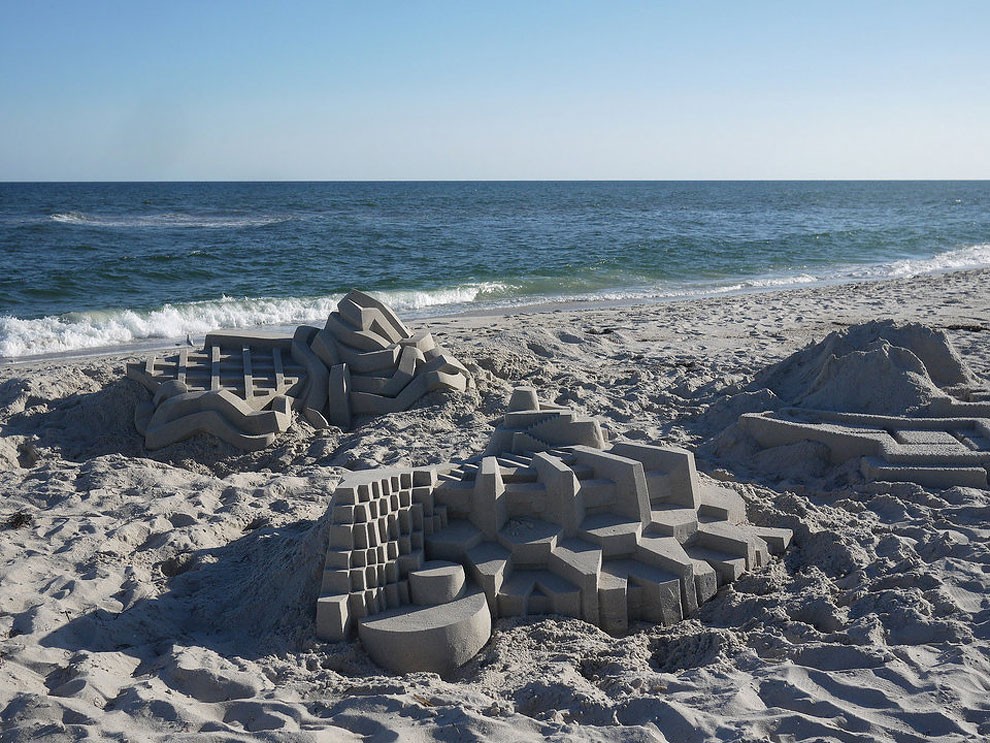 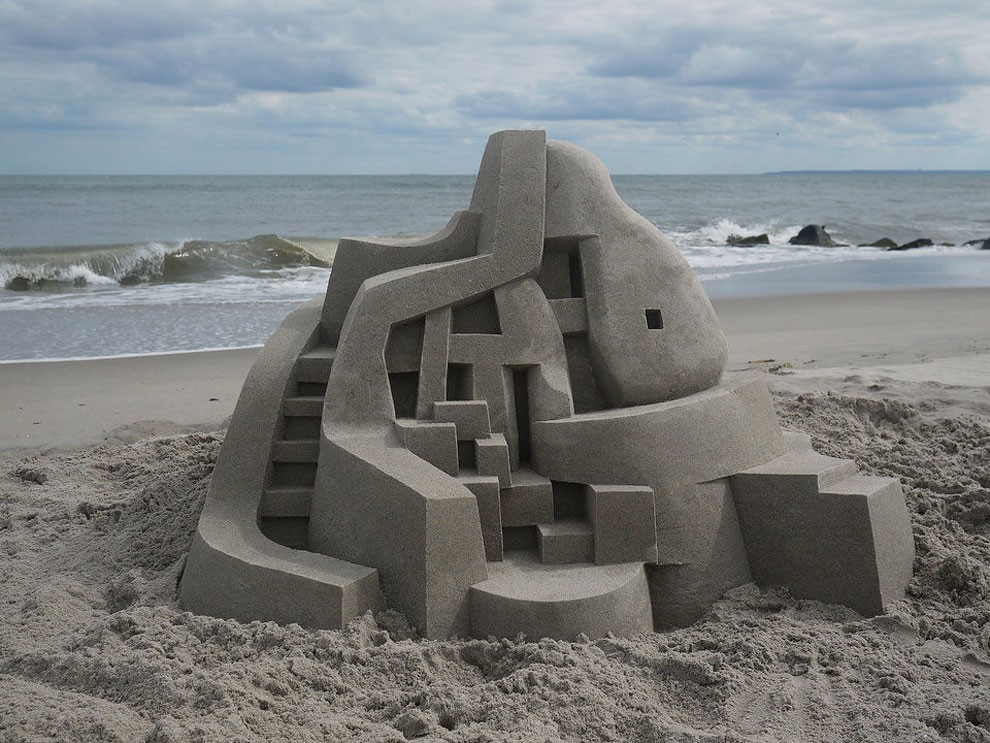 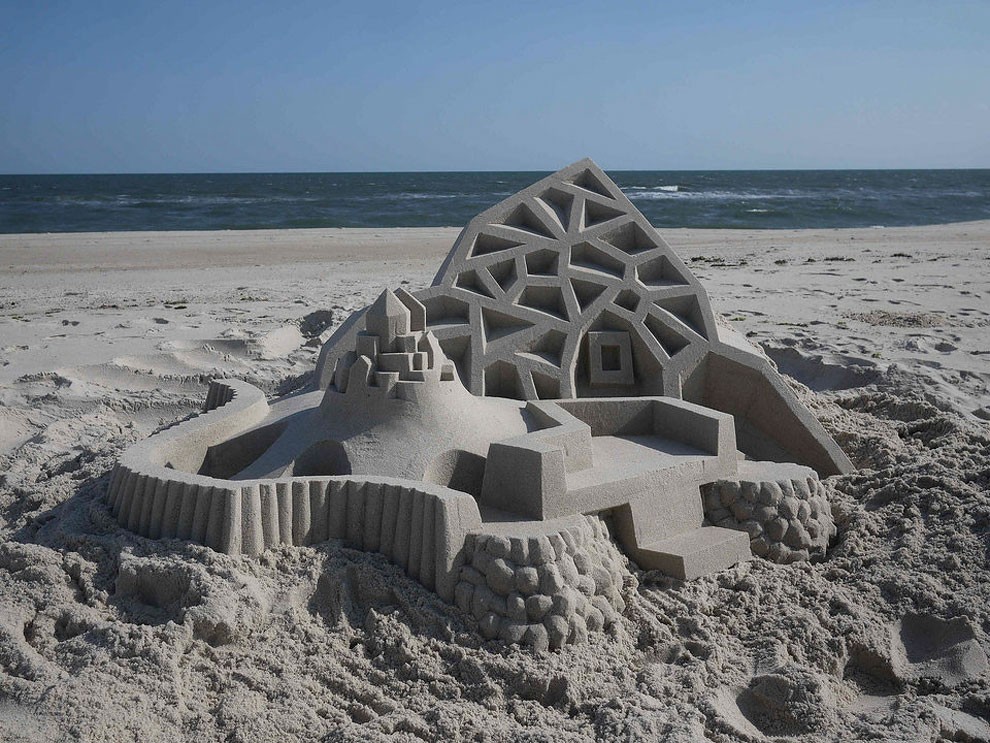 Artist Illustrates 12 Astrological Symbols Using Human Bodies As Her Canvas
These Stairs Show How Many Calories You Burn While Climbing Them
This Female Artist Creates A Superb Scary Face Paintings
The Ironic Loss Of The Postmodern BEST Store Facades
Artist Draws Disney Heroines Kissing their Fathers
After A Breakup, This Artist Made His Own Boyfriend Out Of Wine Boxes
Surreal Illustrations For Book Lovers By Korean Artist Jungho Lee
Digital Artist Shows You How Much Time She Takes To ‘Perfect’ Each Illustration
Artist Philip Beesley Merges Chemistry, Artificial Intelligence, And Interactivity To Create “Living” Architecture
This Artist Already Knows What to Do With Her Life
Artist Crafts Incredibly Realistic Gigantic Flowers Out of Paper
Glass And Concrete Sculptures By Self-Taught Artist Ben Young
Artist Jeff Koons Installs A Giant Inflatable Ballerina In The Heart Of New York
Mysteriously Abandoned In 1976, This Creepy Mansion Just Gave Up Its Secrets
Sky Bridge 721: World’s Longest Suspension Bridge Opens in Czech Republic
Danish Retailer Vipp Has Created A "Battery-Charging Stations For Humans"
The Metamorphosis: Depressive And Dark Paintings By The Artist Anton Semenov
The New Sava River Bridge in Belgrad
Re:Create UA Shared the First Works of Talented Contestants from All Over the World on Reconstruction of Buildings Destroyed by War
Artist Envisions Futuristic Fort-Like Homes Designed To Withstand Hurricanes
Portuguese Street Artist Unveiled A Giant Rabbit Made Of Trash On The Streets Of Vila Nova De Gaia In Portugal
Minimalist Staircase
Architectural & Technology Company Builds Curve Appeal 3D-Printed House
Polish Street Artist Just Unveiled Art Installations In Poland Which Are Based On Advertising Columns
artist, escher, proud, sandcastles, sculpts, would