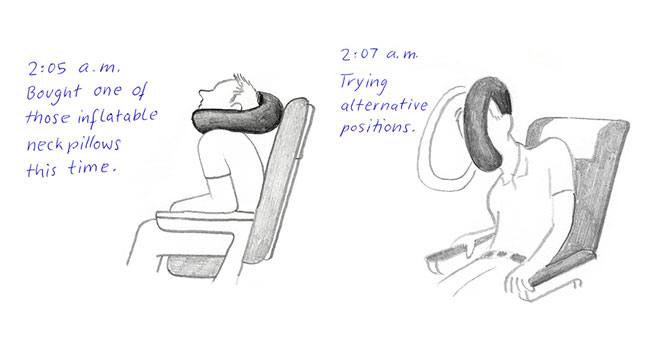 Renowned New York Times illustrator Christoph Niemann recently took a transatlantic flight from New York City to Berlin (with a layover in London), and documented the journey in his sketchbook. The trek itself was typical for your average flight of this distance, but this is precisely what makes his work so enjoyable and humorous to read. Niemann perfectly captures the frustration, boredom, and routine that comes from sitting on a plane for over 12 hours. 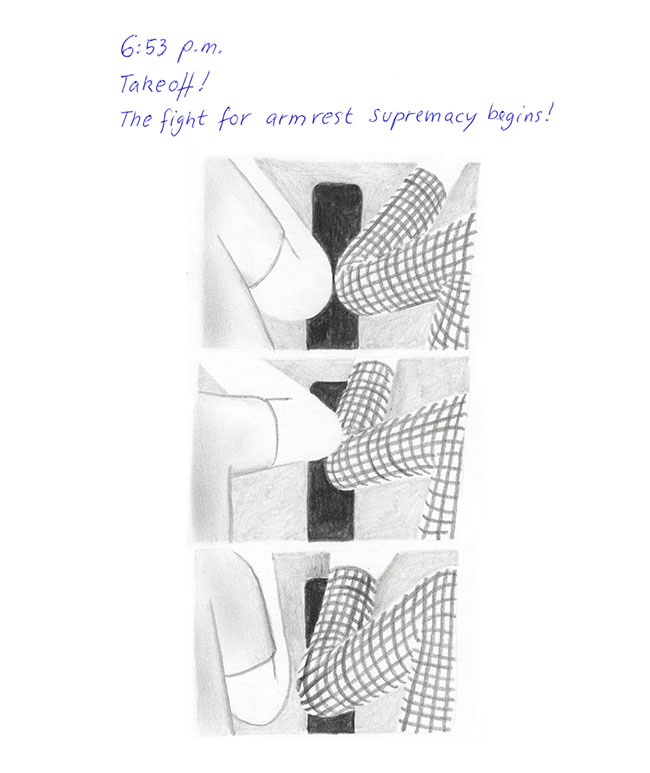 From “armrest supremacy” to agonizing over bland dinner choices, Niemann records the entire trip using minimalist-style pencil illustrations, which are at times, cartoonishly drawn. Coupled with his amusing observations, they paint a vivid picture of how he was feeling while confined to his seat. He mixes this documentation with some personal fantasies—like being able to “delete” his neighbor—which is painfully relatable if you’ve ever had an annoying seatmate. The weary traveler ends the drawings with a moment of happiness: the sight of his luggage safely arriving on the baggage claim. 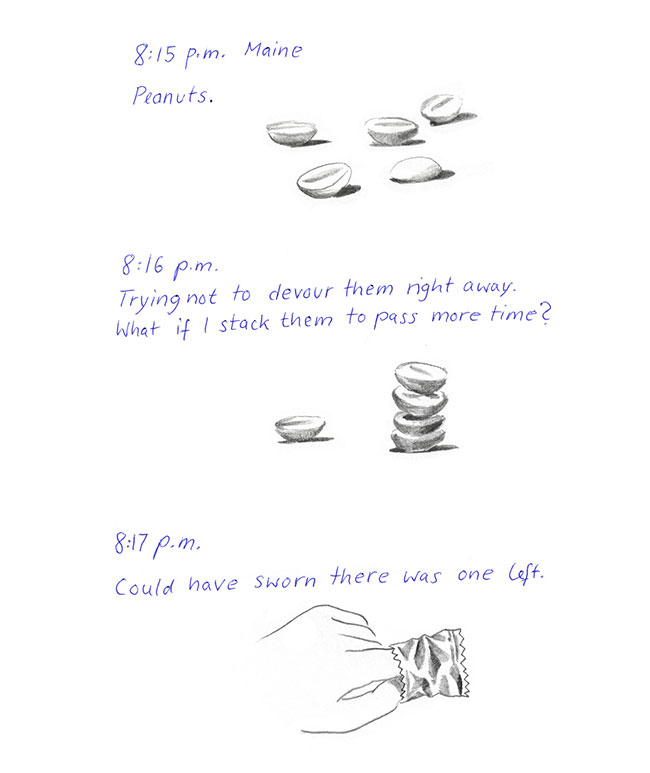 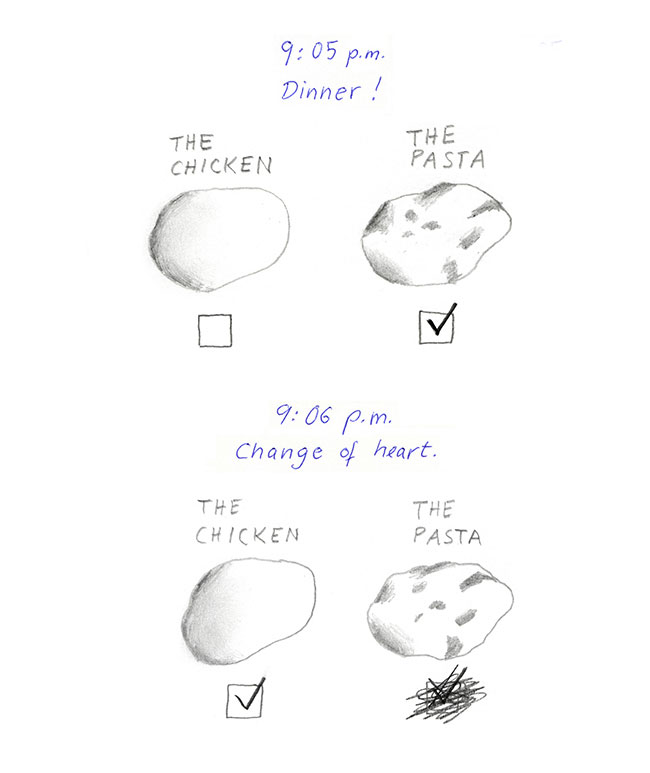 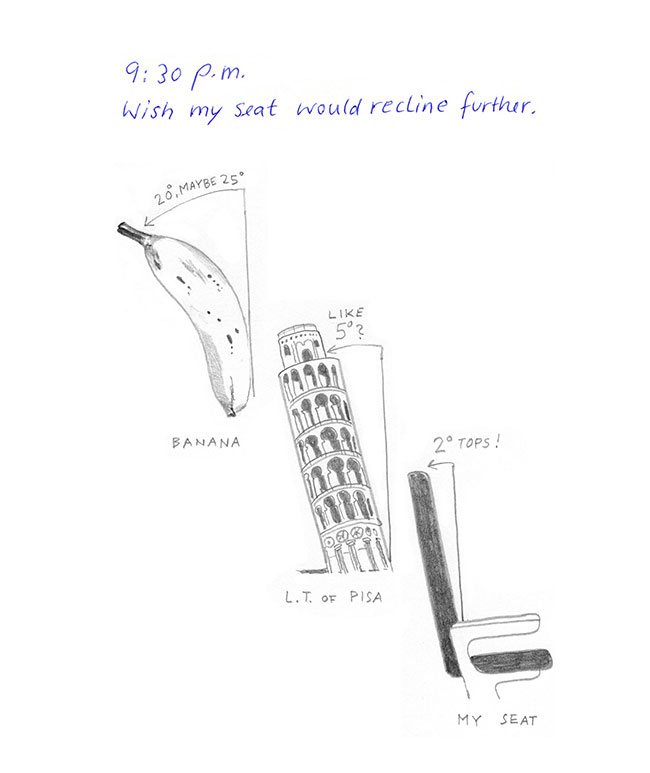 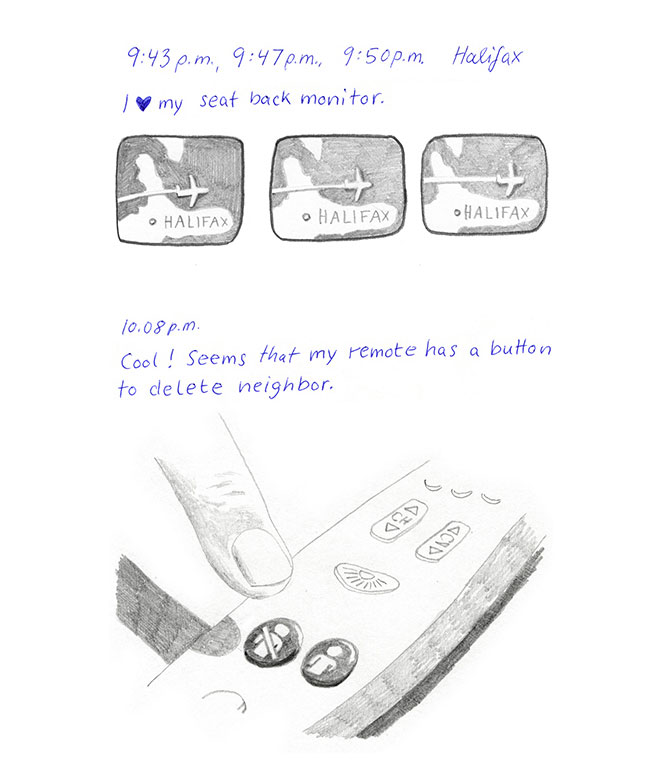 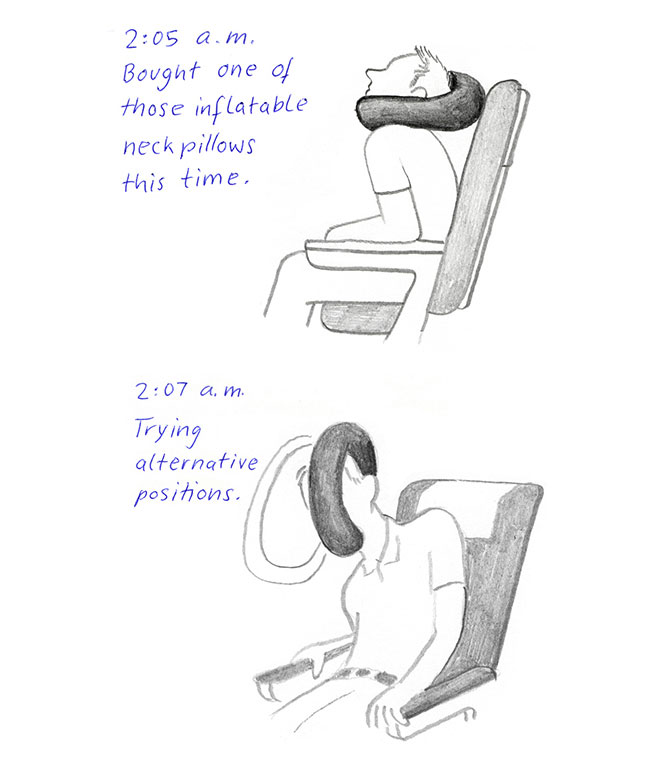 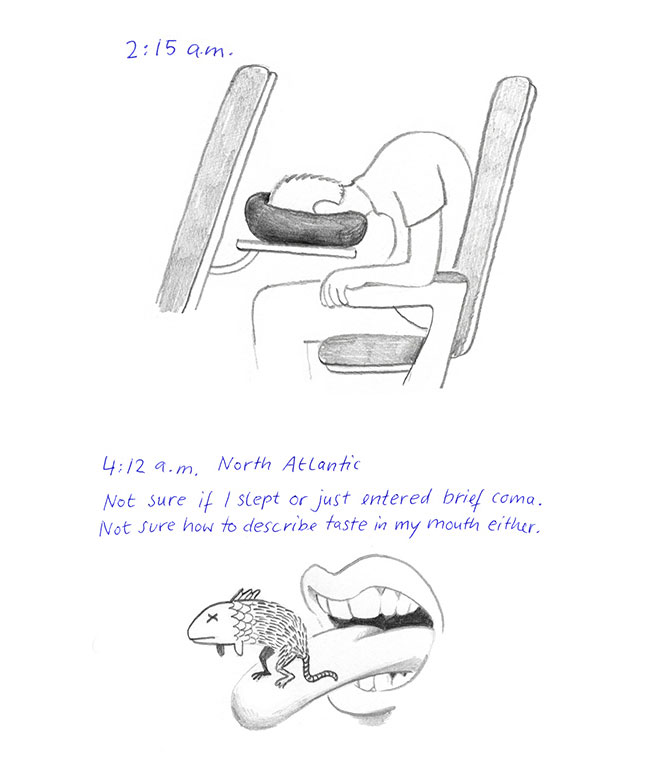 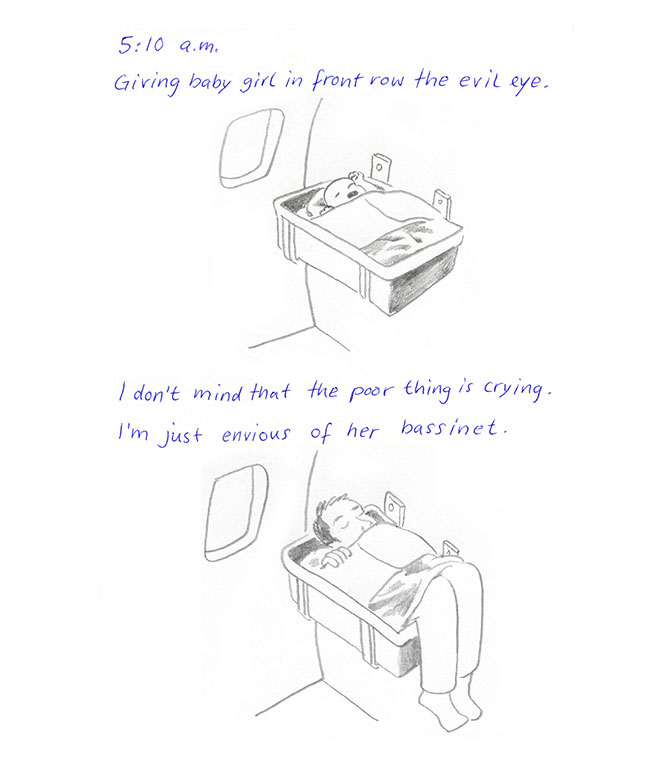 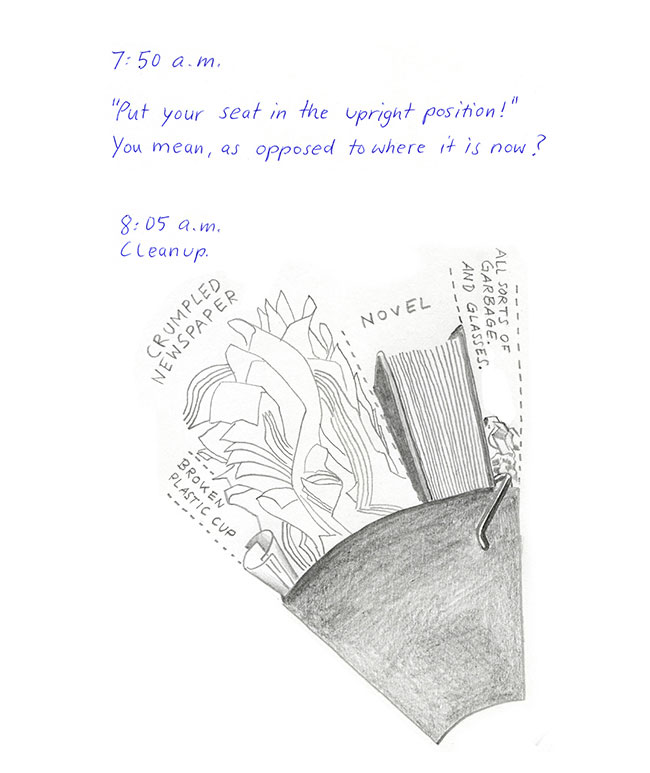 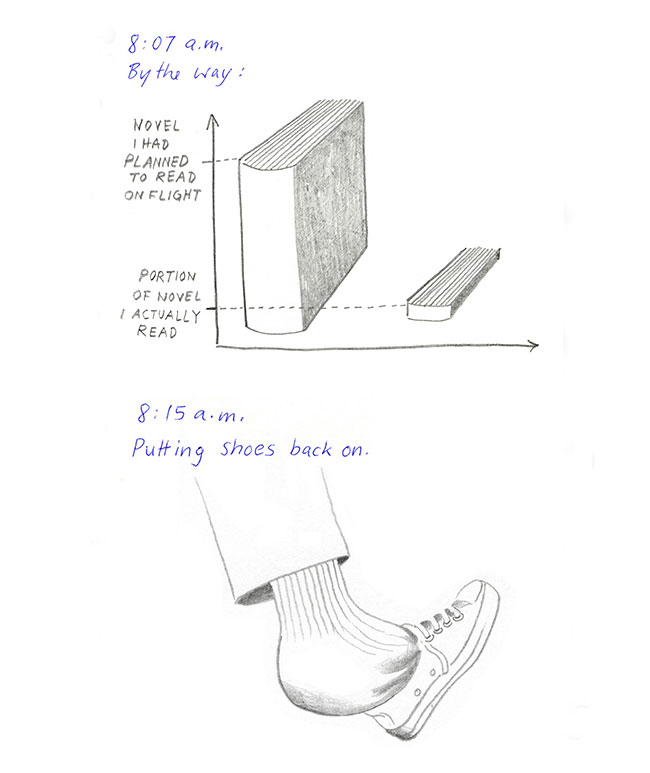 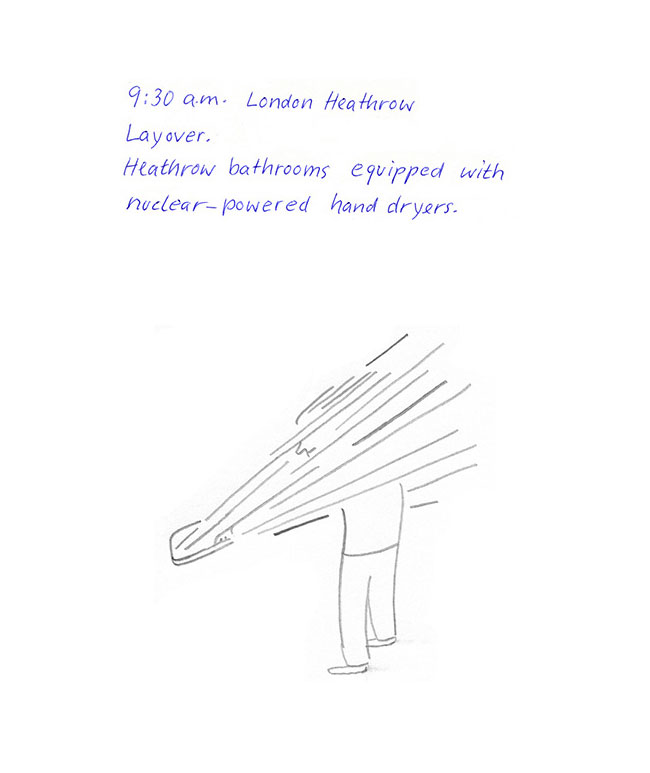 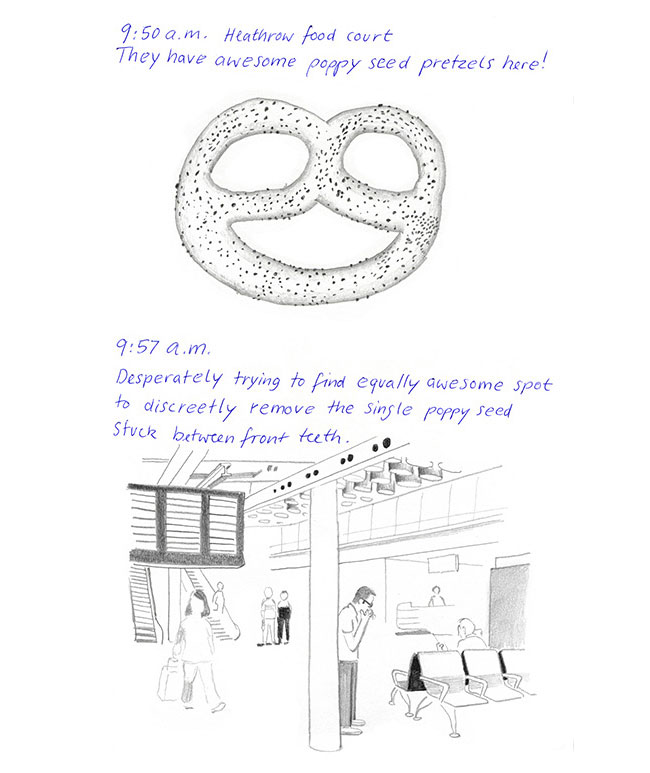 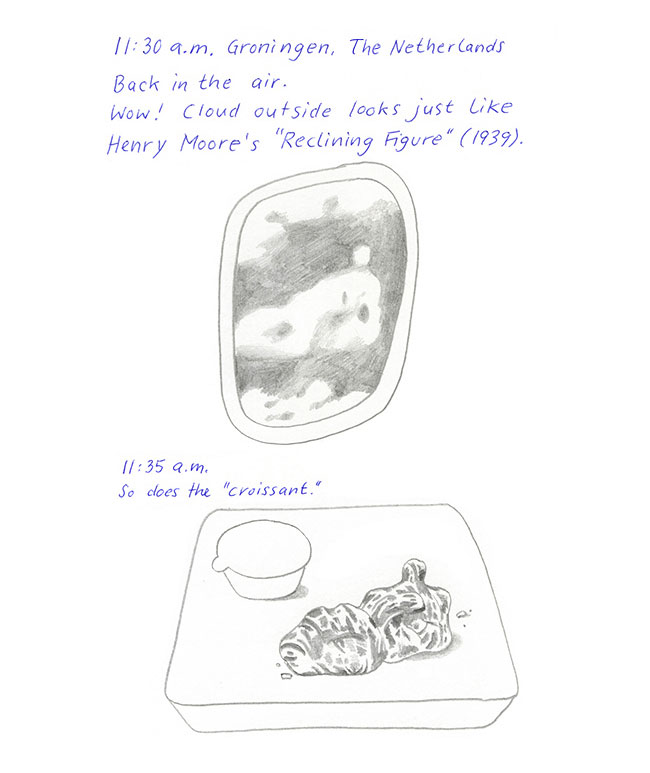 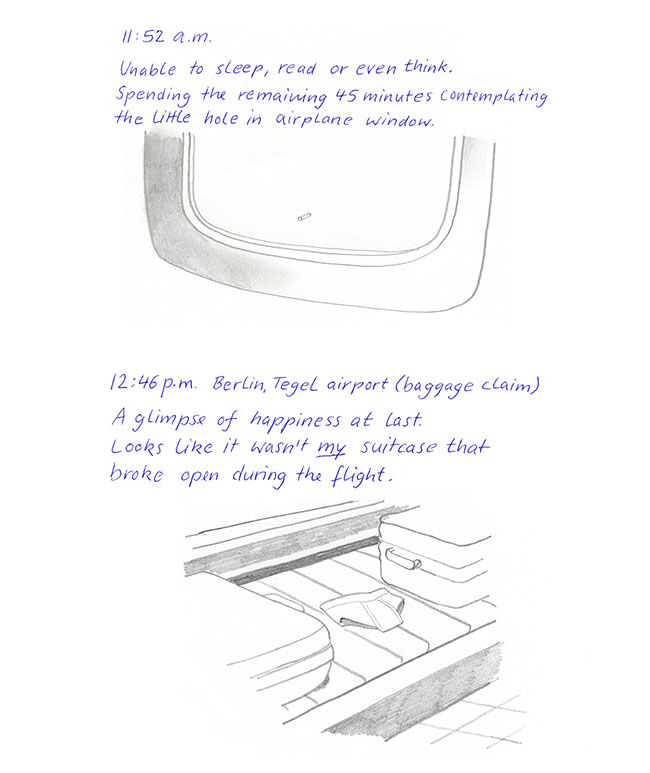 This Is What A Psychiatric Hospital That Has Been Abandoned For Years Looks Like
Instagram Duo Travels The World Snapping Locations From Their Favourite Series
Eagle Hunting in Mongolia
The Mighty Oak Planted In An Abandoned Dovecote
Japanese Artist Creates Stunning Mashup Photos Of Superhero Action Figures
Living on Water
Beautiful Self-Portraits Of Lee Godie, A Homeless Artist Who Turned Bus Station Photobooths Into Her Private Studio From The 1960s
Western United States In The 1960s: Colorful Life In The American West 50 Years Ago Through Amazing Found Photos
Woman Parodies Perfect Instagram Travel Photos With Hilariously Unphotogenic Selfies
This Artist Draws People’s Emotions That Can’t Be Expressed By Words
Very Creative Artist From Brazil Bullies Banksy With These Humorous Parodies
Artist Creates Realistic Life-Sized Female Sculptures Inspired By The Graceful Beauty Of Renaissance Art
The Photographer Has Travelled The Western Australian Coast Since The Early 90s, Capturing Clotheslines In All Their Glory
Artist Transformes Famous Paintings Into Batman Pop Art
It’s Tempting, But Don’t Try Eating Anything Made By This Artist — You Might Break Your Teeth!
Highline Festival in Monte Piana: Hammocks Miles above Ground
This Artist Has Put Together An Amazing Photo Set Of Peope Blending Into The 7 Wonders Of The World
Artist Olek Covers A House In Finland With Pink Crochet
Artist Isabella Montan Creates Pantone-Inspired Pop Culture Graphics
Shark Island in Central Indonesia
Extraordinary Images Of The Costa Concordia Cruise Ship By Jonathan Danko Kielkowski
“Days of Night – Nights of Day”: Photographer's Vision Of The Northernmost City In The World
Artist Esoj Luna Illustrated Iconic Brands As If They Were Humans
This Artist Spent 10 Years Carving A Giant Cave – Alone With His Dog
artist, events, every, flight, humorously, illustrates

Superb Vector Illustrations By The Polish Artist Krzysztof Nowak
Artist Turned 3 Tons Of Plastic Waste Into A Colorful Forest In Mexico City
These 50 Town Names In The USA Sound Like A Joke But They’re All Real
Please Don’t Step On The Fish! Vietnam’s Unique Flooded Cafe
Artist Cain Motter Illustrates Impact of Credit on Modern Society
The Mudmen Of The Western Highlands - The Terrifying Tribe From A Remote Part Of Papua New Guinea
Every Spring This Forest In Belgium Becomes A Blue Wonderland
Photographer Wakes Up At 5AM To Hike The Transylvanian Mountains And Capture Stunning Landscapes
"Enfarinats" Festival – The Battle With Flour And Eggs In Spain
Futuristic Spiderweb Cocooned Trees Spotted In Pakistan
Source of inspiration since 2007. Proudly hosted by WebHostingBuzz.
Privacy Policy · Terms of Service · Content Removal Policy 🇺🇦 ❤️