Is This The Ultimate And Most Dangerous Infinity Pool In The World? 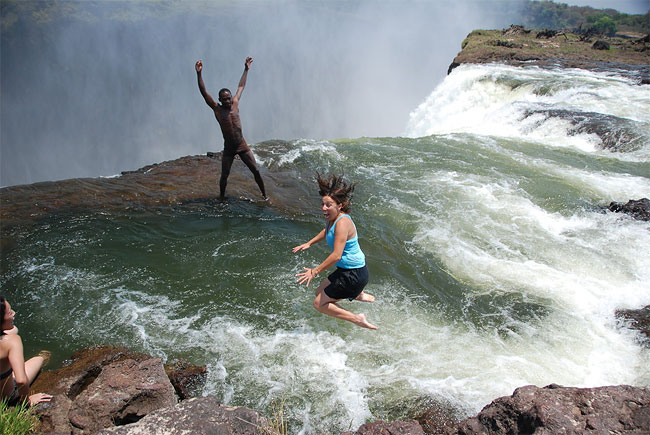 The Victoria Falls or Mosi-oa-Tunya is a waterfall located in southern Africa on the Zambezi River between the countries of Zambia and Zimbabwe. A famous feature is a naturally formed pool known as the Devil’s Pool, near the edge of the falls, accessed via Livingstone Island in Zambia. When the river flow is at a certain level, usually during the months of September to December, a rock barrier forms a pool with little current; some people swim in the pool. Occasional deaths have been reported when people slip over the edge of the rock barrier 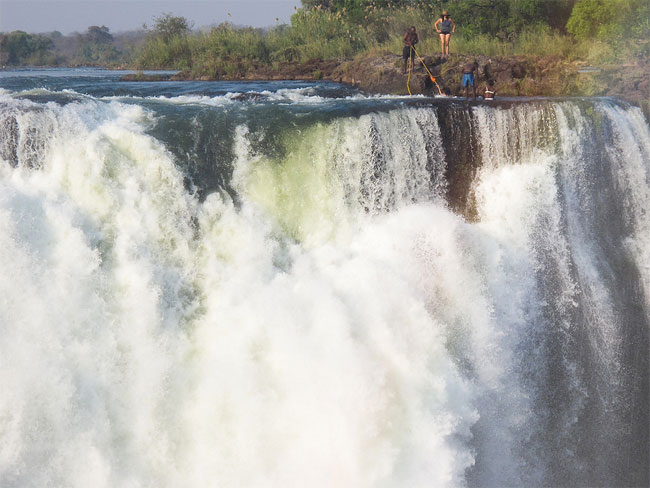 “Devil’s Pool. One of biggest islands on the crest of the Falls is Livingstone Island, where the explorer David Livingstone first saw the falls in Zambia (he was the one who named the falls after Queen Victoria).” 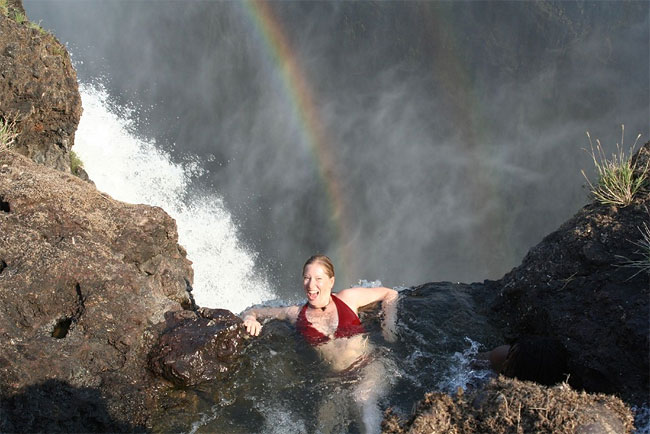 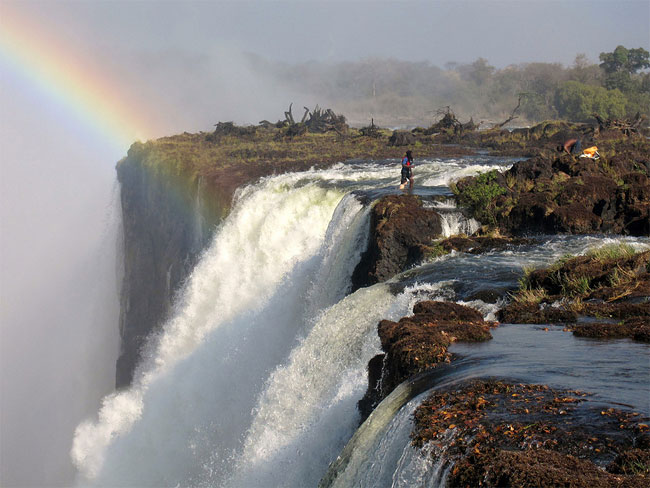 Photo by Greg and Ashley 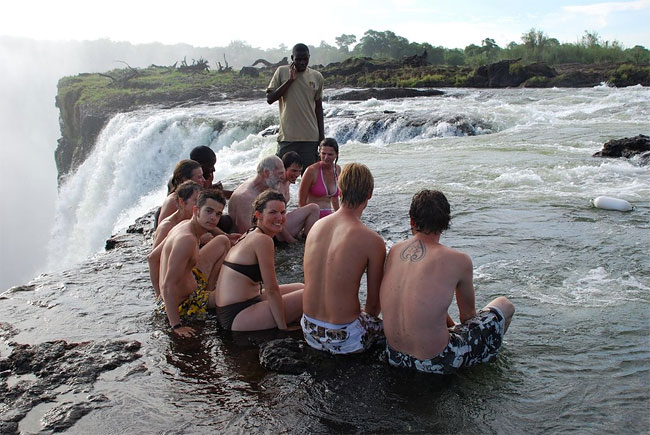 “After our morning hike in Victoria Falls National Park on the Zimbabwe side, we crossed the border to the Zambia side to take a trip out to Livingstone Island and swim in the Devil’s Pool, a pool formed by a natural rock outcropping at the very edge of the falls. It was freaking amazing!” 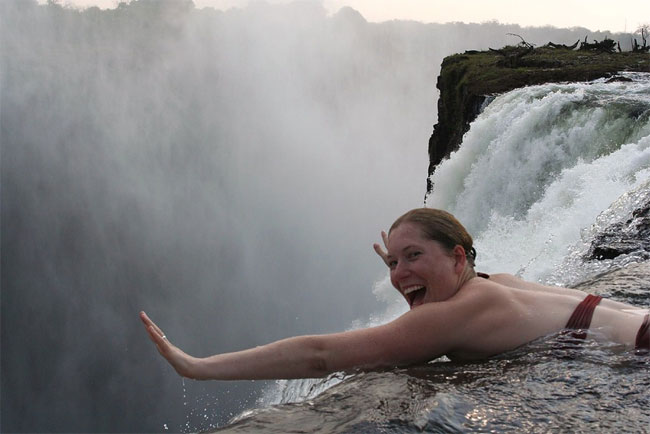 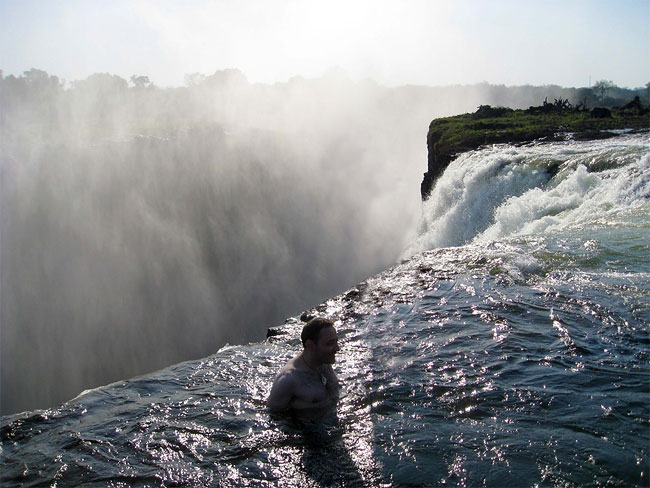 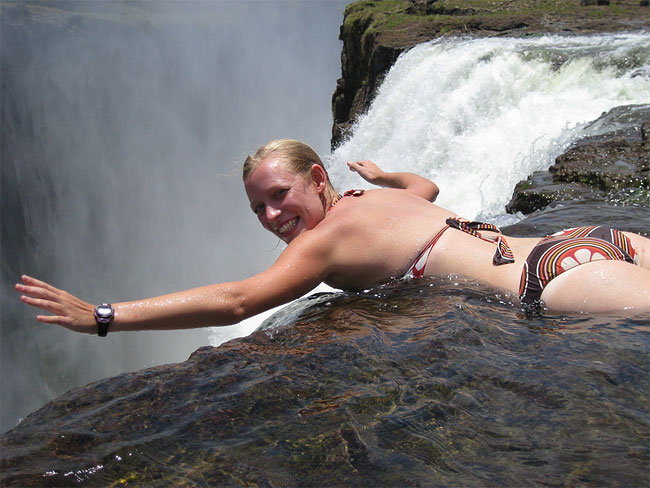 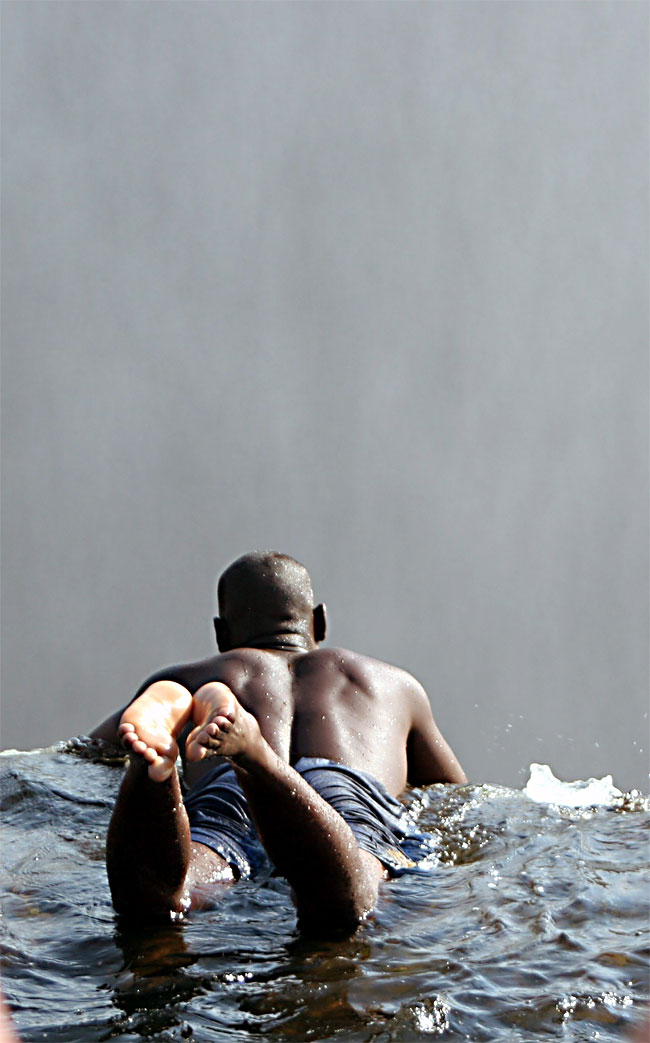 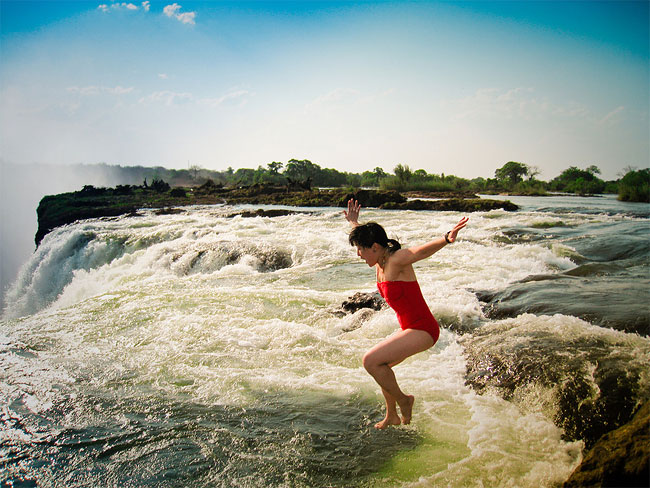 “We had to give up an aerial view of the falls for this, but it was worth it. How often do you get to jump into a waterfall (well ok, a pool in a waterfall), and then hang out right at the edge of it? If you ever go during low water season to Vic Falls, I highly recommend doing this, as long as you are comfortable with swimming.” 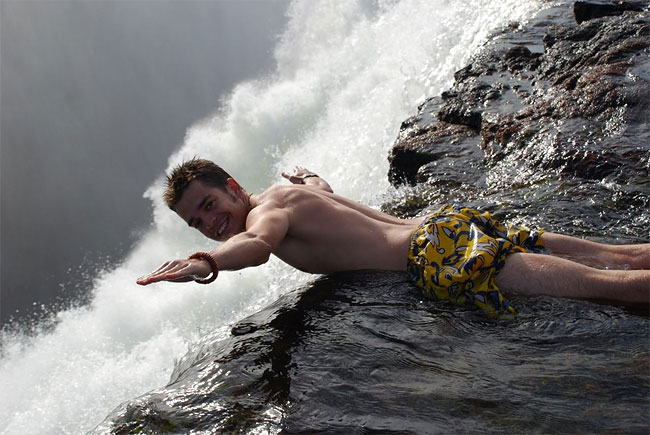 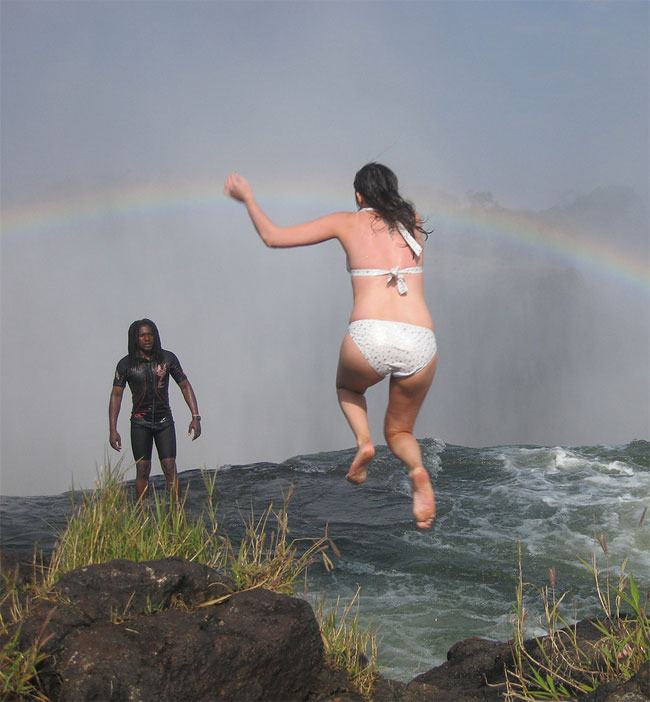 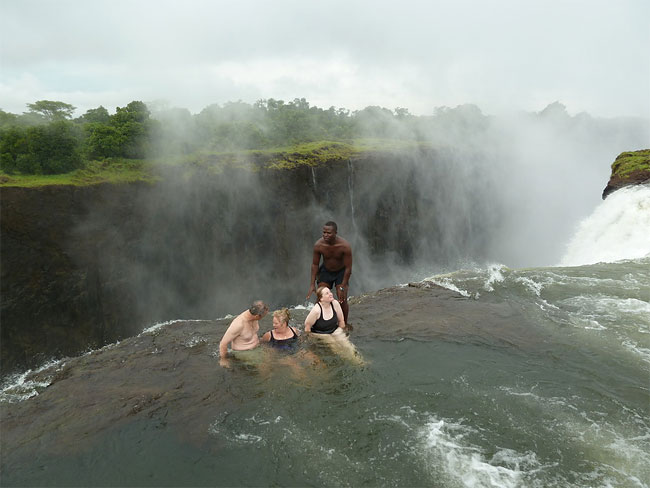 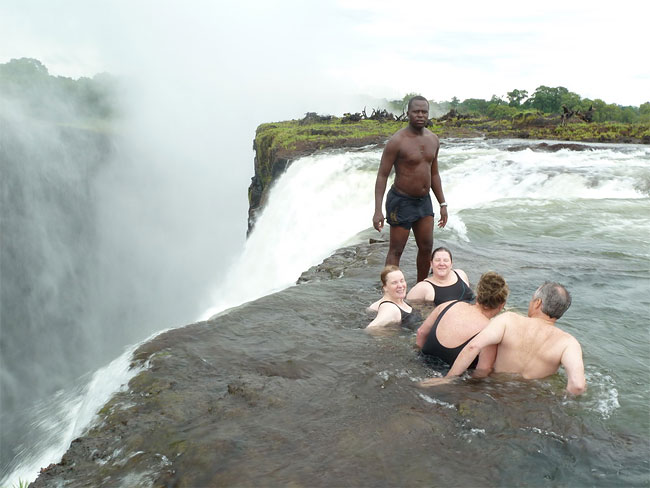 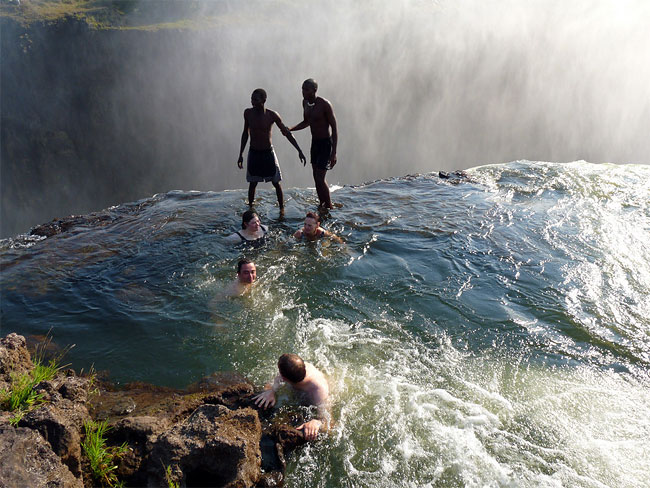 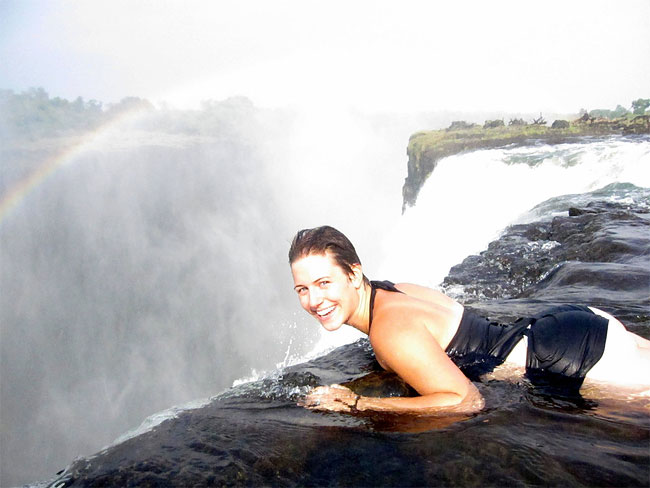 Out Of This World: Magnificent Entries For The UK Astronomy Photographer Of The Year 2017
Adorable 'Little Monks' In Chongqing Go Viral Online
Swiss Village Has Been Projecting World Flags Onto One Of Their Tallest Mountains In Solidarity Of Pandemic
Daniel Garcia Creates Thought-Provoking Illustrations That Show What’s Wrong With Our Society
59th World Press Photo Contest Winners
Girl Travels Europe with Cardboard Cutout of Late Father
Rare Snowfall On The Acropolis In Athens, Greece
15 Awe-Inspiring Photographs To Make You Fall In Love With The World All Over Again
My Fucking Restaurant Is Open For Business In Barcelona, Spain
Pack All The Things! Here Is The Ultimate Burning Man Checklist
Inside the World's Biggest Tree House by Horace Burgess
APWorks Introduces Light Rider, The World’s First 3D-Printed Motorcycle
The Queen Of The Night, A Very Special Kind Of Orchid Cactus, Blooms Again At The St. Petersburg Botanical Garden
Stunning Colorized Photos Of The Discovery Of The Tutankhamun's Tomb In The 1920s
John & Wolf: A Dude And His Husky Bumbling Around The United States
A Suspended Treehouse to Sleep with Birds
The Most Beautiful River in the World
Largest Mural on an Inhabited Building in the World
Internet In Real Life: This Small Italian Village Became A Web 2.0 Intervention Project
World Solar Challenge 2013 in Australia
Virtual Traveller Used Google Street View To Explore Poland During Quarantine, Here’s What She Found
The World’s First Line Of Dolls With Disabilities Is Now On The Market
Hippie Van Of The 1960s: Amazing Photographs That Capture People With Their Classic VW Buses
Graphic Artist Turns One-Star Reviews Of National Parks Into Great Posters
dangerous, infinity, ultimate, world

The Mighty Oak Planted In An Abandoned Dovecote
World's Largest Textile Created from Golden Spider Silk Dazzles
Floating Snowflake Hotel in Norway that Offers the Perfect View of the Northern Lights
Probably, The Most Cozy And Beautiful Toilet In The World With Views Of A Norwegian Waterfall
Terrifying Photos From Streets Of China Covered With A Deadly Fog
Ice Alaska – World Ice Art Championships 2013
Stunning Colorized Photos Of The Discovery Of The Tutankhamun's Tomb In The 1920s
A Foldable Backpack Inspired by an Armadillo
The Kings Of The Forest - Photographer Spent 3 Days In Nepal To Document The Isolated Tribe
Elderly Blind Man and His Armless Friend Plant Over 10,000 Trees in China
Source of inspiration since 2007. Proudly hosted by WebHostingBuzz.
Privacy Policy · Terms of Service · Content Removal Policy 🇺🇦 ❤️