Twenty-six-year-old Nasir Sobhani, better known as The Streets’ Barber, cuts people’s hair. Six days a week, he does this in a shop, to earn a living. But on his day off, he goes out on to the streets of Melbourne to clip the hair and shave the beards of homeless people, for free. He takes the opportunity while he does so to convince these people that it’s never too late to pick yourself up and start again.

Nasir spends one day a week giving haircuts to homeless people right on the street. 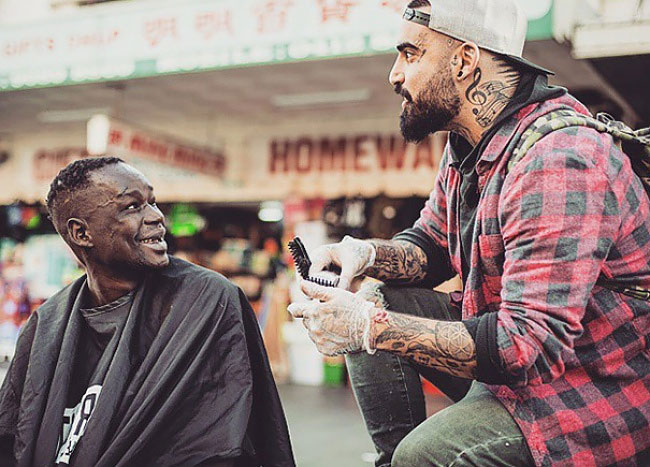 ’A haircut can do so much for someone. That’s why I call what I do “Clean Cut, Clean Start”’, he says. 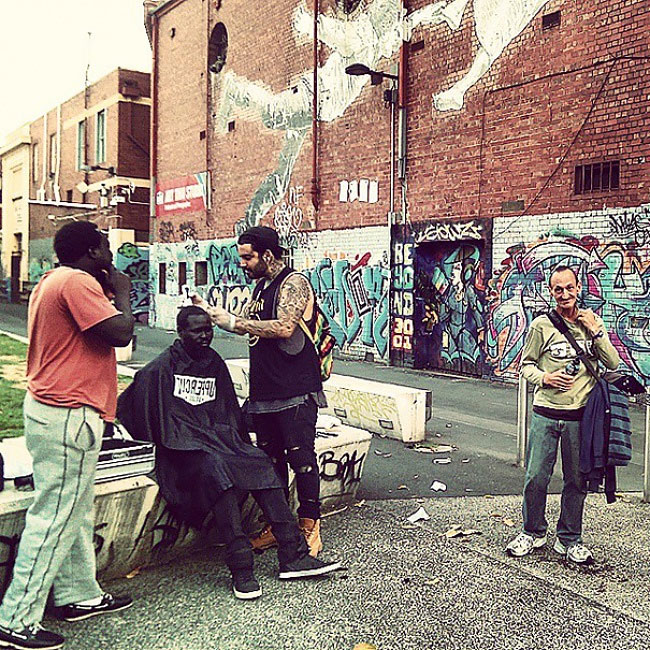 Nasir explains that he used to use drugs for a long time. He couldn’t look at himself in the mirror and was ashamed to be around other people. 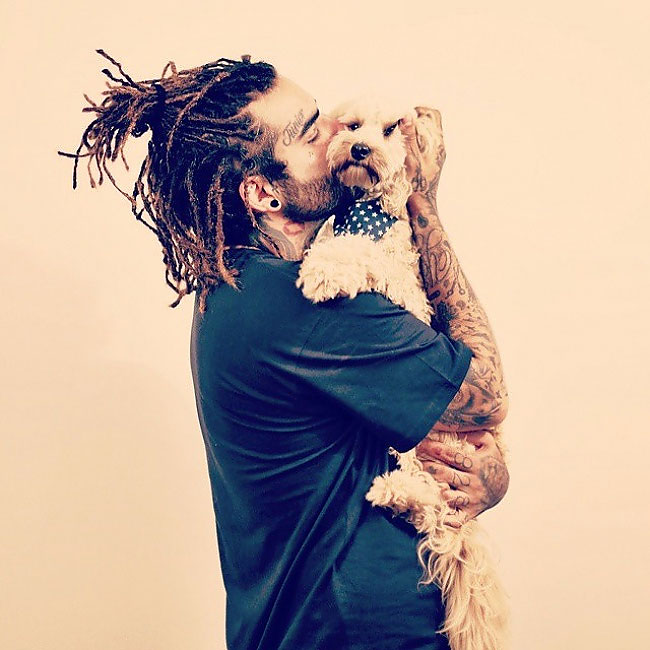 ’Cutting people’s hair for free is my new addiction. It gives me a real, better kind of high.’ 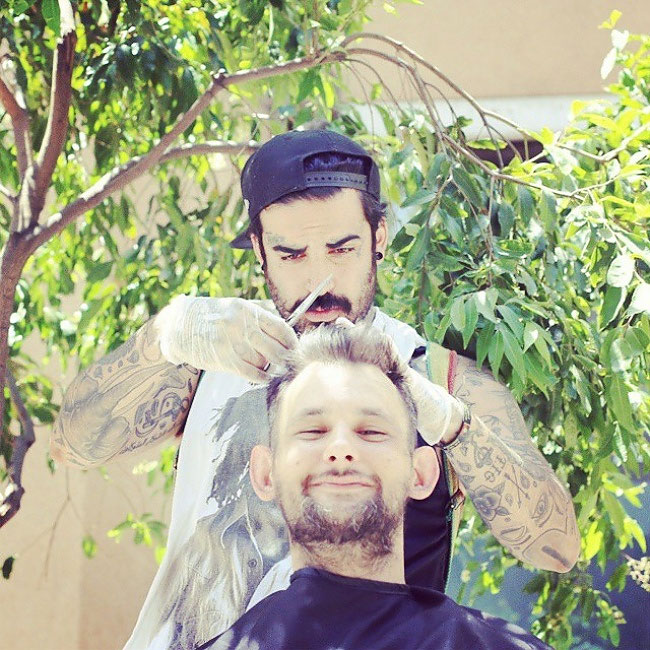 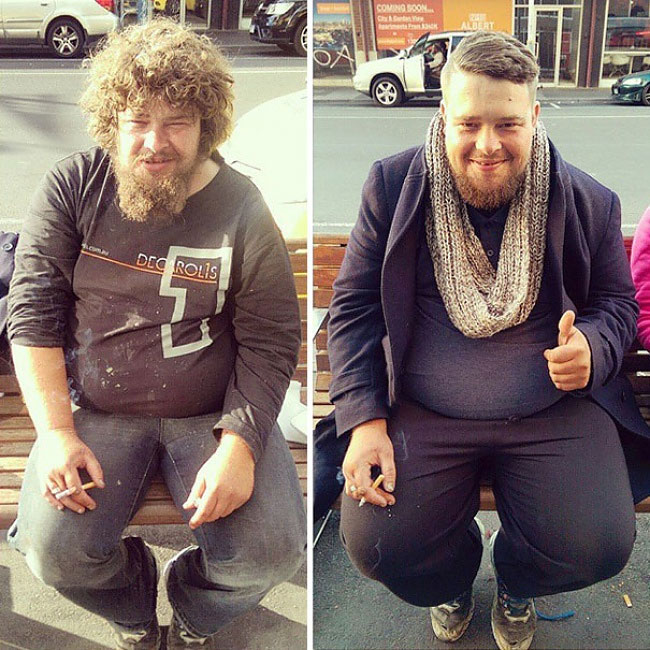 Mark is 28. He hasn’t seen his parents in almost 10 years. ’Mark really needs someone to talk to, even for just a little bit’, says the street barber. ’He hadn’t had a haircut for 8-9 months when we met.’ Mark’s been living on the streets for 3 years. He has no close friends or family to help him out. He wants to be understood, accepted and loved. Nasir has now become Mark’s best friend. 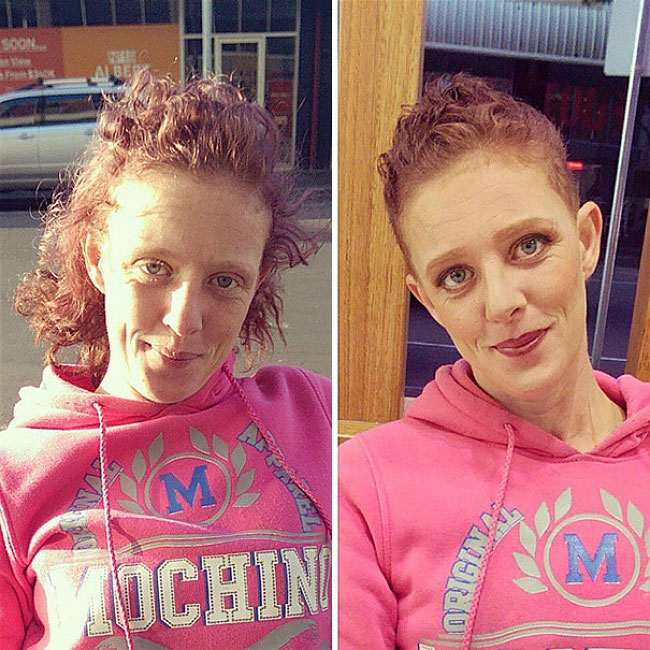 This is Rachel. She is 28 years old, and has one son. ’I was roaming the streets with my kit and Rachel walked by’, recalls Nasir. ’She knew I was the guy who gave free haircuts, and asked if she could get one too.’ She had been on the streets since she was 13 years old. She didn’t go into too much detail but told me that she really had a rough upbringing and that’s why she ran away and got adopted by the streets. She wants to become a hairdresser herself, and for the time being she works on the street. Her son, Xavier, is only one years old and the ’joy of my life’ she says. 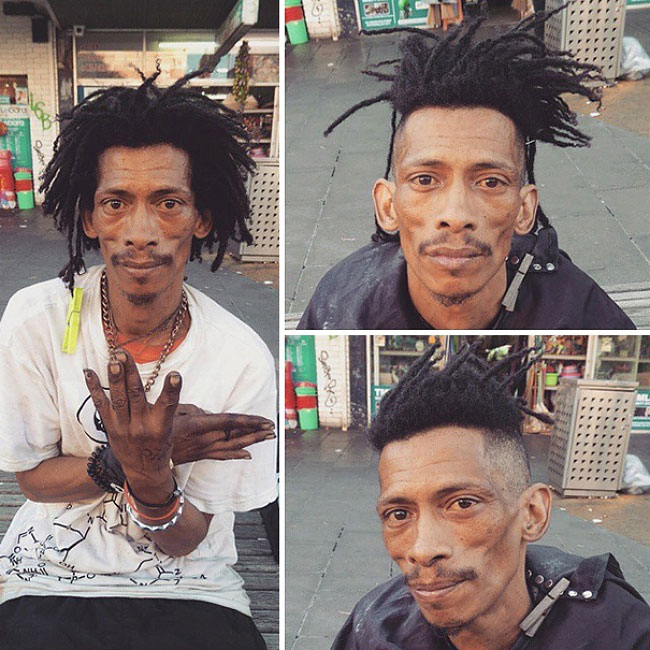 This is Marcel. He is in his late thirties. ’I may state that many of my street clients are wonderful, sweet and pure souls but I can honestly say that no one, in my experience, has been as kind and and generous as Marcel’, says Nasir. He has 4 kids, none of which he gets to see anymore. The mother of his children who was his first love and now ex-wife took them away from him several years back. 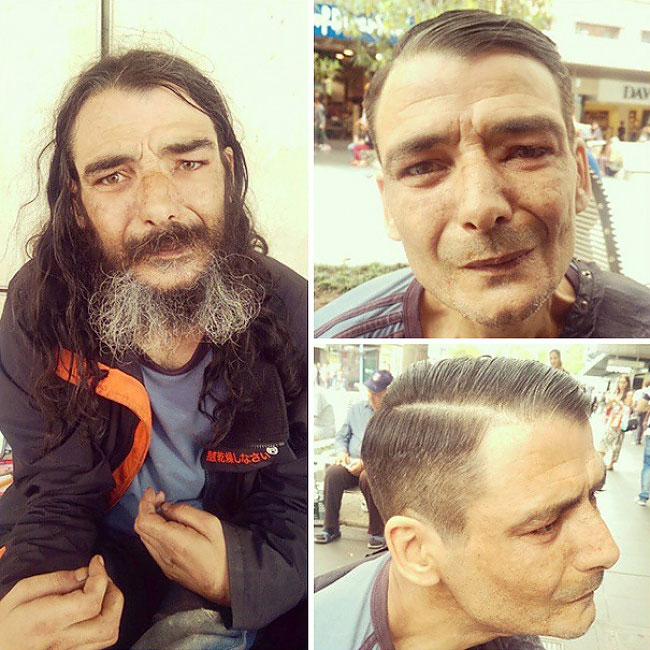 This is Graham. He’s 33 years old. He suffers from cerebral palsy and epilepsy. He is forced to live on the streets because he has no family. Nasir explains: ’When I asked him about homeless shelters, he told me that they couldn’t accommodate him due to the fact that the government requires trained staff on-call who are capable of caring and assisting people with disabilities — like Graham. However the cost is too high and shelters do not have enough funding for such staff, which means he often has nowhere to stay.’ 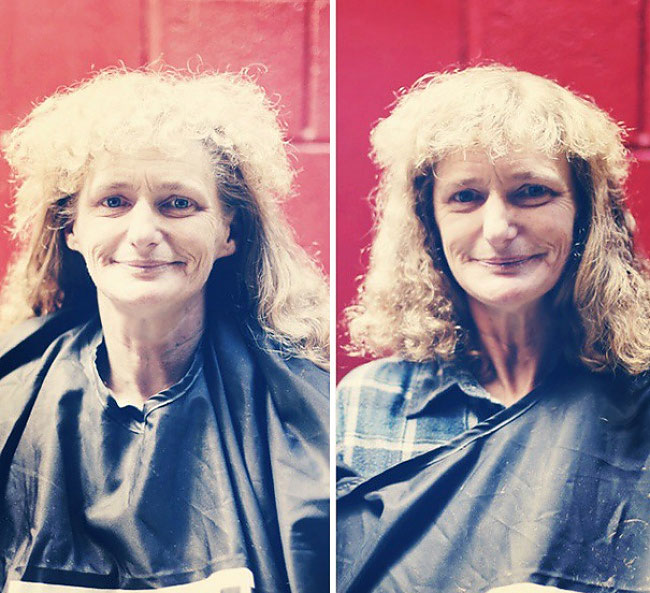 Jen, 50, has four kids and three grandchildren. They all stopped communicating with her when they found out about her heroin addiction. ’She was so pleased with her haircut!’ says Nasir. ’She hadn’t been to a hairdressers in five years, and after her transformation, she thanked me and said that she hadn’t looked this good in a very long time.’ 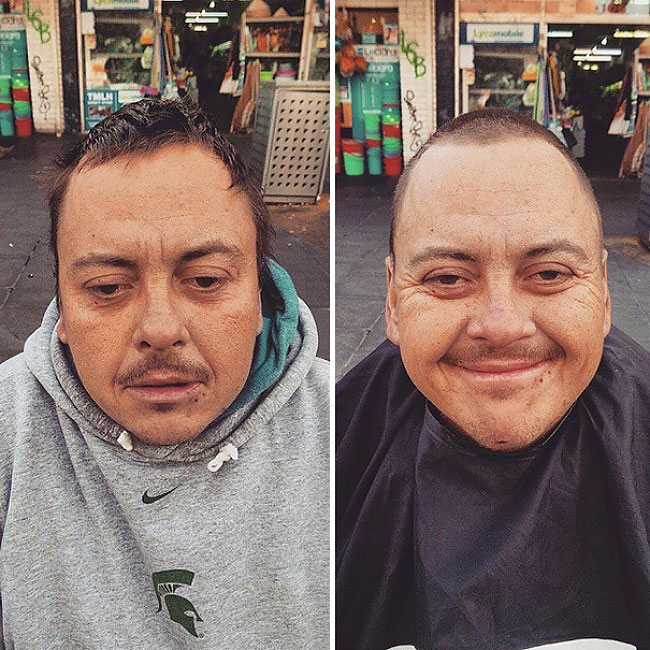 This is Janko. He’s in his forties and has no partner or children. Nasir recounts: ’When he approached me cutting another client he was very drunk, and asked if I could give him a cut when I was finished. I told him of course and that I’d be finished soon. He waited his turn patiently and when it was time for him he sat down and told me he wanted a number 2 all over — which he later admitted was because he didn’t know when his next cut would be.’ 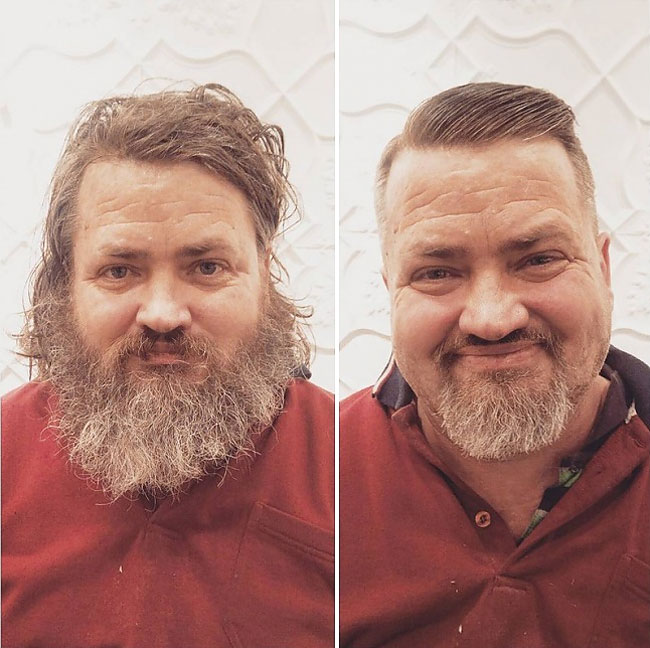 This is Phillip. He’s 48, and he lives on the street selling the magazine ‘The Big Issue’, which was created to help homeless people earn a wage legally and in turn, become part of society again. ’I met Phil in a shop for homeless people, and I decided I would offer him a haircut. On that day, all the Big Issue sellers received brand new clothing from the shop, as well as a free haircut from me. I was happy with Phil’s cut, and I think he was too,’ Nasir writes. 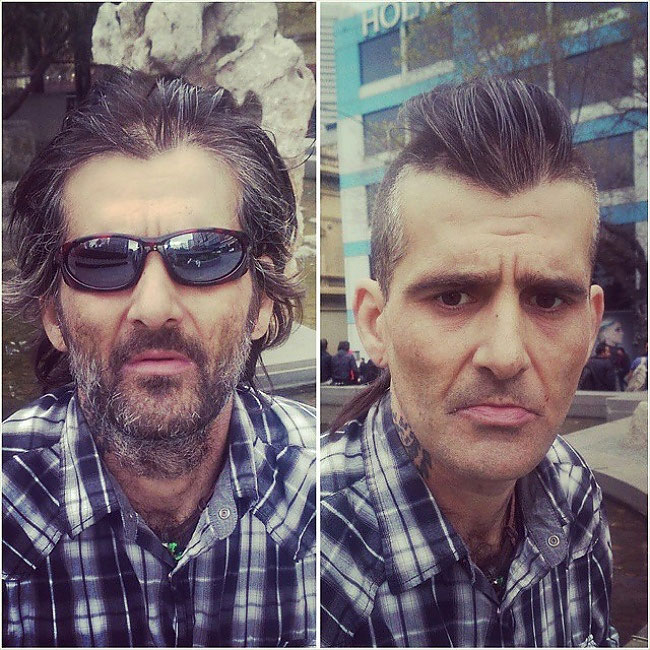 Frank, 41, is a father to two children, and has suffered from a heroin addiction for most of his life. He told Nasir that he couldn’t afford a haircut and therefore had to grow a beard. He had been very depressed and hadn’t cared about his appearance. I ended up leaving him with a lot of hair on top, as he wanted to be able to slick it back. 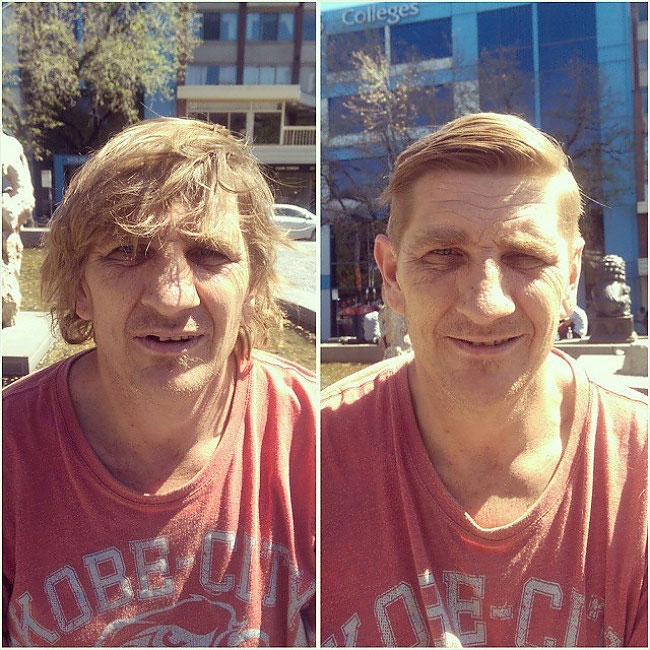 This is Richie. He’s 46; he has three kids. He hasn’t seen his daughter for 12 years, but he tries to meet up with his sons every weekend. ’I used to walk past him every day on my way to work, and he was always very suspicious of my suggestion to give him a free haircut. But after a few weeks he agreed. He has a great sense of humour, he made me laugh so much my sides hurt!’ recalls Nasir.

’I share my experience of addiction with them and listen to their stories. It’s a great feeling when you know you’re doing some good. I don’t feel alone anymore’, says Nasir. 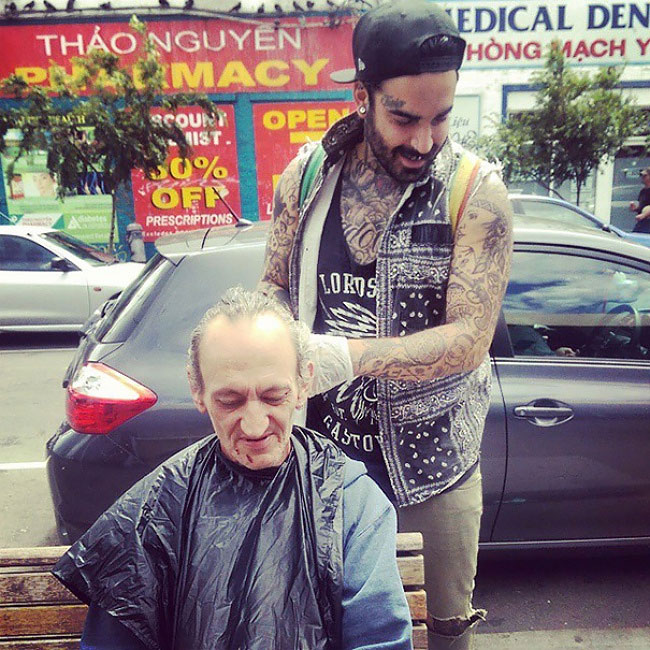 Thanks to people like Nasir, there’s always hope that the world can change for the better!
h/t: brightside

Stunning Oil Paintings Of Tattooed Women By Chris Guest
Funny Cartoons From The New Yorker That Will Definitely Crack You Up
What’s Wrong With Today’s Society Captured In 32 Brutally Honest Illustrations By John Holcroft
"I Asked My Friends Who The Most Beautiful Girl From Their Country Was..."
Hilarious Comics That Perfectly Sum Up Your Life As An Adult
"Idealization": The Photorealist Paintings By Yasutomo Oka
Magical Drawings Put Women In Conversation With Their Inner Demons
Graphic Designer Andrea Antoni Finds Pantone Colors In The Natural Landscapes
The North Face x Gucci Mark Collab Launch with Murals Across the Globe
Arresting Illustrations With Pleasing Textures And Details By Eva Bee
Meet Khoudia Diop, Stunning Charcoal Black African Model
"Stranger In A Strange Land": The Striking And Futuristic Artworks By Stuart Lippincott
One Of The Most Creative Instagram Accounts You Need To Follow Immediately
Life Isn't Black And White: Chinese Students Send Message With Creative Graduation Pose
Pen & Ink Depictions Of Trees Sprouting into Animals By Alfred Basha
Intimate Murals Revive Abandoned Buildings Around The World
Compelling Portraits of People Who Abandoned Civilization for Life in the Wilderness
The Expressive Digital Fashion Collages by Charles Bentley
How To Look Smart In Zoom Meetings, an Illustrated Guide by Sarah Cooper
This Artist Creates Magnificent Portraits On Maps
Artist Creates Contemporary & Surreal Collages Mixing Aesthetic References
The Psyduck Pokemon Sexy Cosplay By Beautiful Helena Steele
Woman Born Without Legs Defies Beauty Stereotypes as a Model
Wonderful Color Photos Of American People In The 1950s
changes, gives, haircuts, homeless, people, their

Vietnamese Artist Creates Surreal Illustrations Of Animals and Cute Things in the Forest
This Black Guy Drew What It Was Like Being The Only Black Man In A White Office In The 60s, And It’s Worse Than You Think
"The Art of (DE)Construction": The Superb Collages of Nicollages
After Their Wedding, This Couple Did What Many Of Us Have Always Dreamed Of Doing
French Artist Eyes Record With Giant Swiss Hillside Portrait
Grieving For The Lost Childhood: The Creepiest Graffiti Of Pripyat
Artist Imagines Famous Cartoon Characters With Human Bodies And The Result Is Bizarre
How Much Is Your Body Worth On The Black Market?
Brazilian Artist Creates Drawings That Perfectly Visualize People’s Emotions
Frog That Looks Like Princess Leia Sparks Photoshop Battle, And The Results Are Hilarious
2007 ‒ 2023 by Design You Trust. Proudly hosted by WebHostingBuzz.
Privacy Policy · Terms of Service · Content Removal Policy ❤️ 🇺🇦