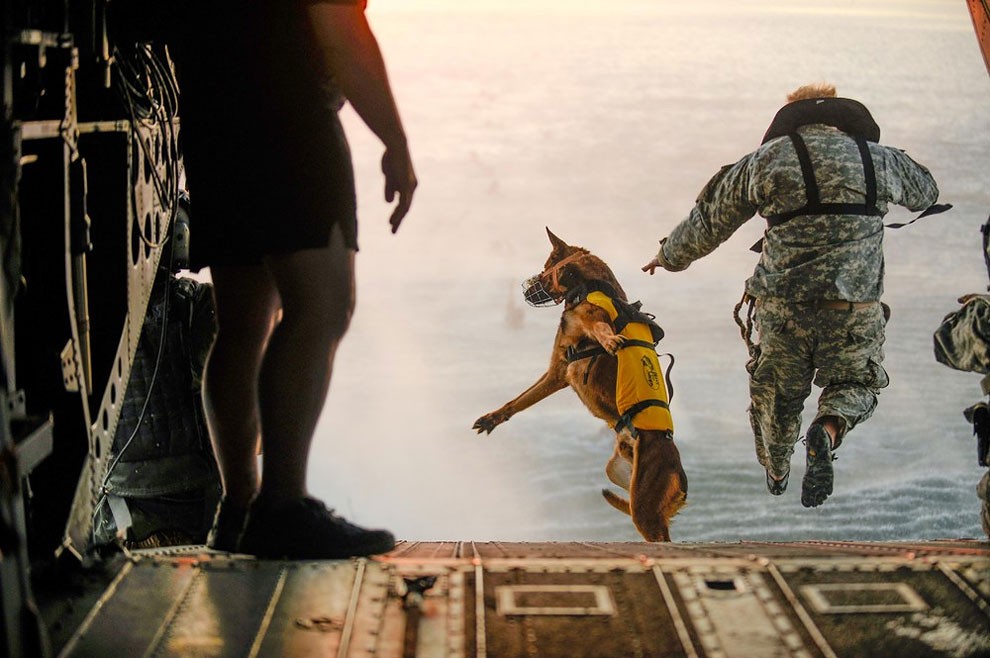 A U.S. Army soldier with the 10th Special Forces Group and his military working dog jump off the ramp of a CH-47 Chinook helicopter from the 160th Special Operations Aviation Regiment during water training over the Gulf of Mexico as part of exercise Emerald Warrior 2011 on March 1, 2011. (Photo by Tech. Sgt. Manuel J. Martinez/U.S. Air Force) 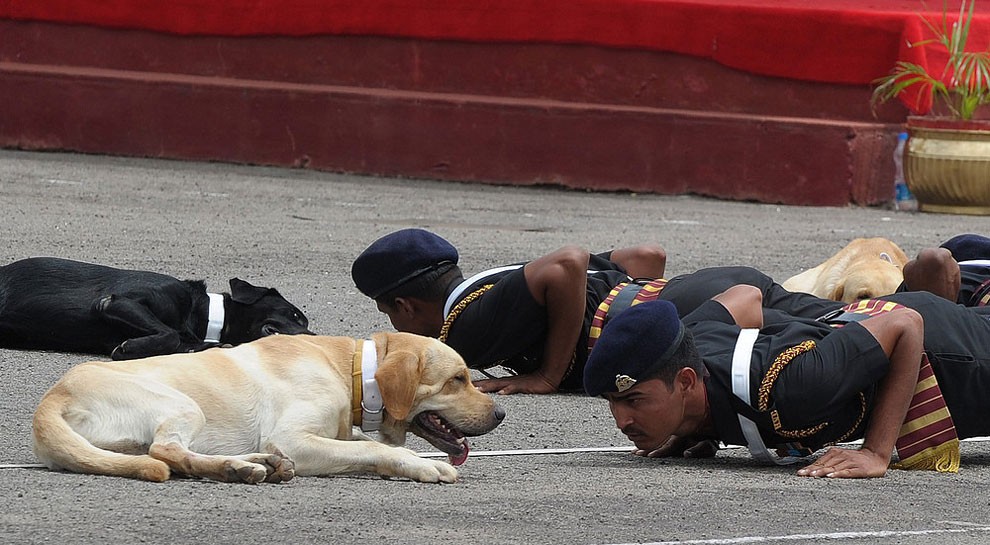 Indian army commandos with their dogs perform during a show at a parade ground in Secunderabad, the twin city of Hyderabad on July 14, 2013, on the eve of the diamond Jubilee celebrations of The Military College of Electronics and Mechanical Engineering (MCEME). (Photo by Noah Seelam/AFP Photo) 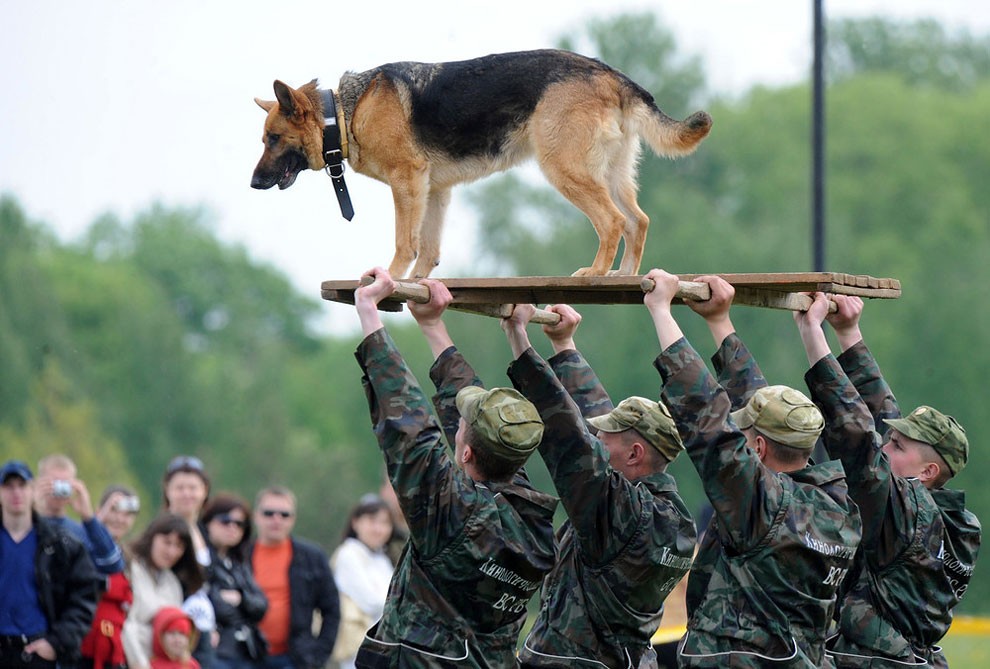 A Belarussian military dog rides a platform being held by a group of soldiers carrying it above their heads in Minsk on May 19, 2009 during the country’s annual military expo and arms fair. (Photo by Viktor Drachev/AFP Photo) 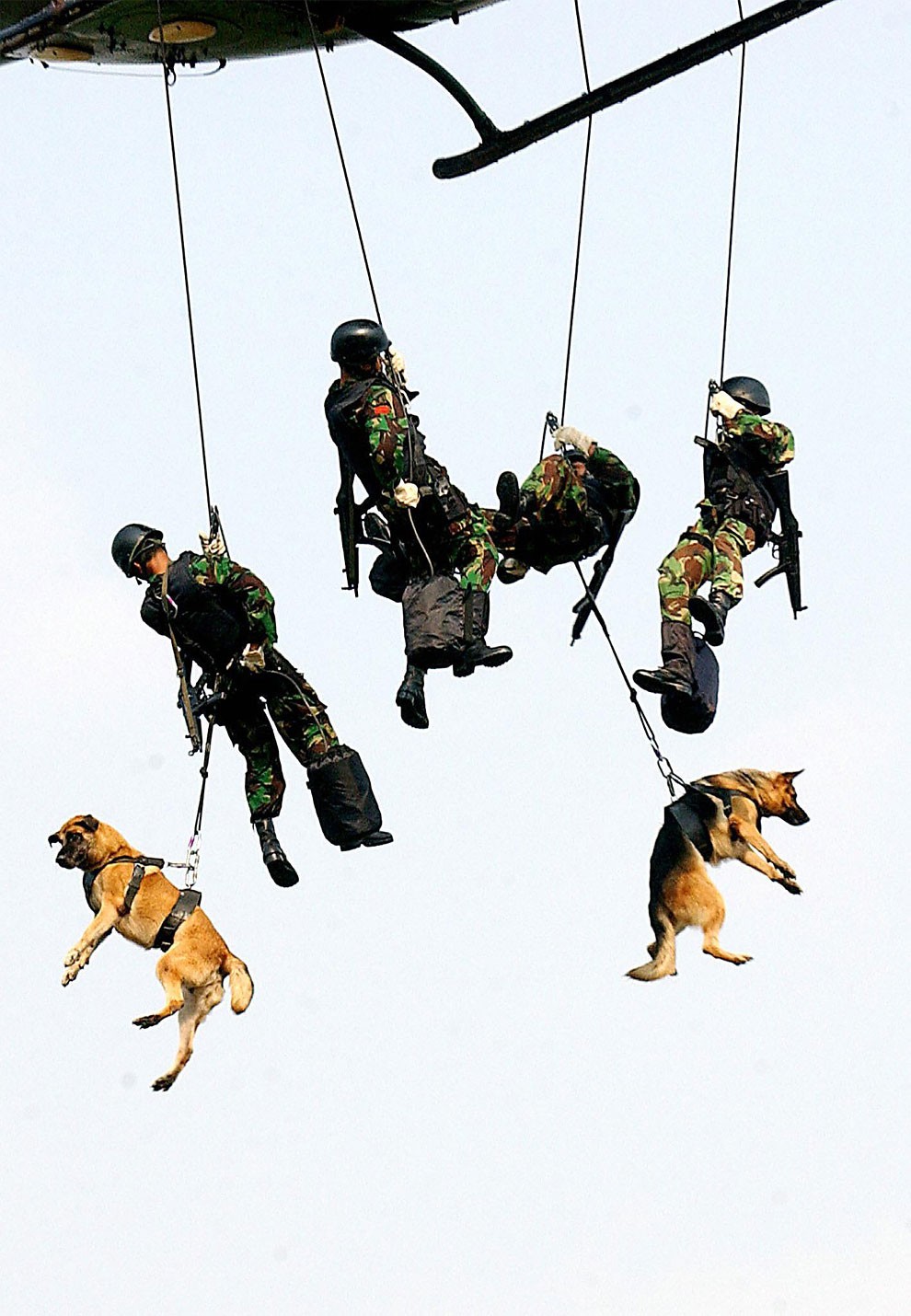 Soldiers with dogs from the Armed Special Forces descend by rope from a helicopter during an anti-terror drill in Jakarta, 20 October 2003. (Photo by Bay Ismoyo/AFP Photo) 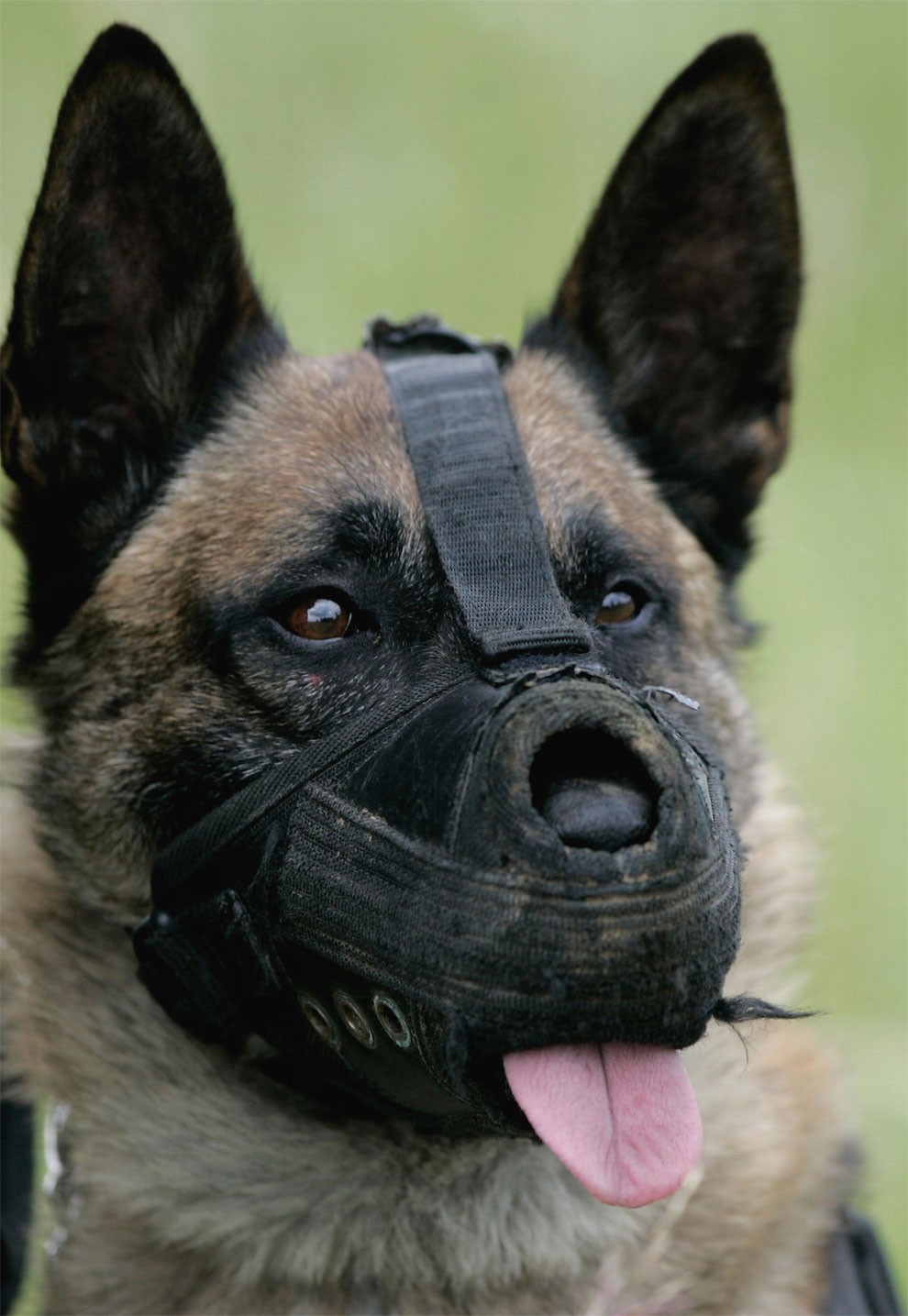 A masked dog of the paratroop regiment is pictured during a troop exercise on June 7, 2006 in Merzig, Germany. (Photo by Ralph Orlowski/Getty Images) 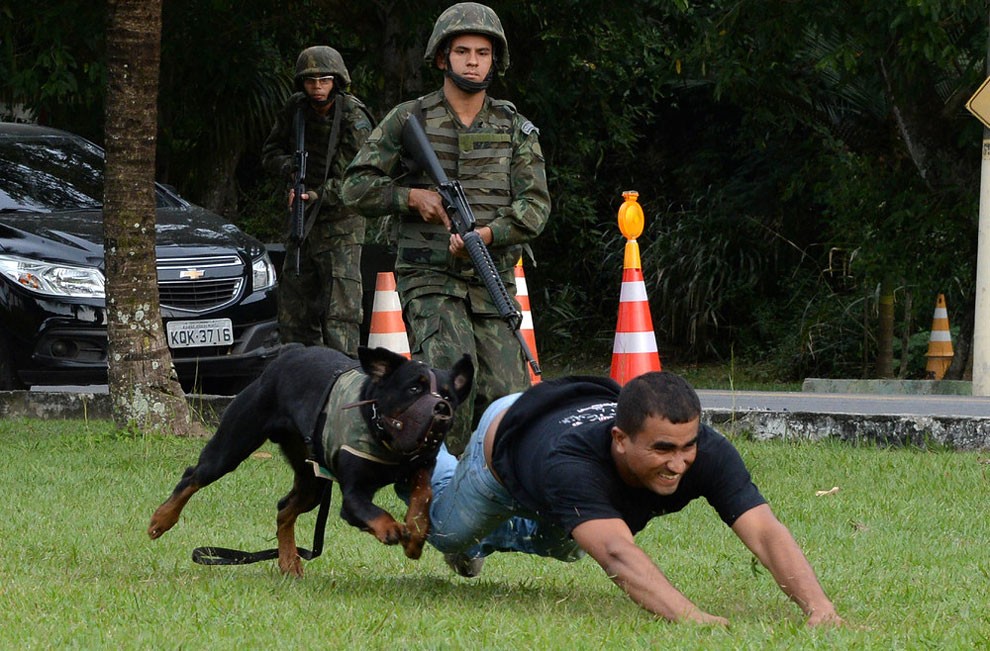 Members of the Brazilian Navy take part in a terrorist attack drill dealing with chemical weapons as part of the security measures for the upcoming FIFA Confederations Cup and World Youth Day, and the FIFA 2014 World Cup and 2016 Olympic Games, in Rio de Janeiro, Brazil, on May 27, 2013. (Photo by Vanderlei Almeida/AFP Photo) 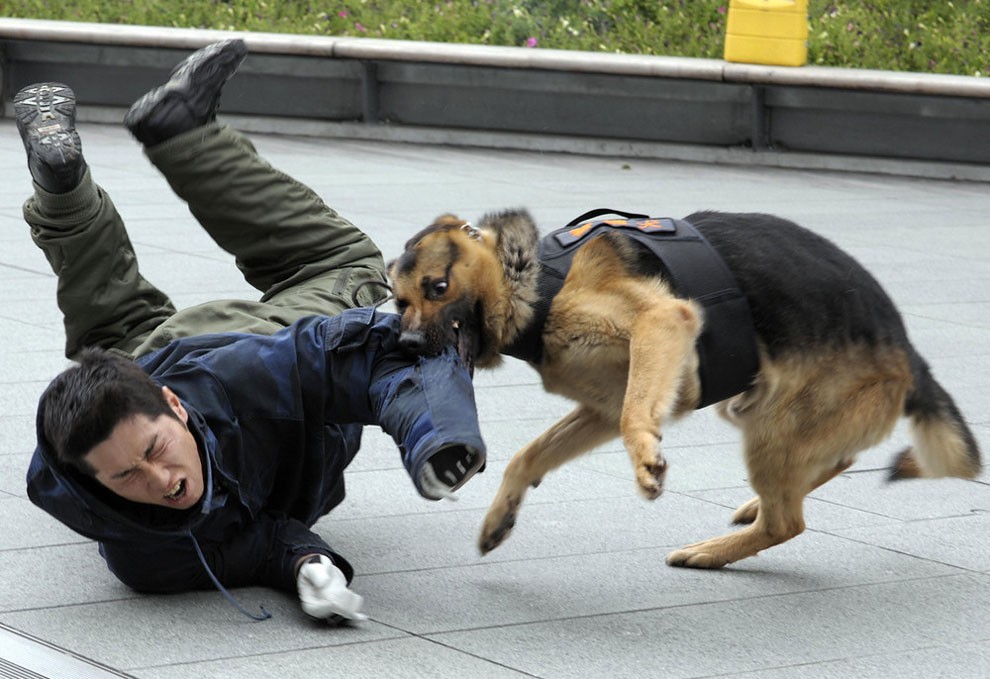 A police dog bites the arm of a “suspect” during an anti-terrorism practice at the Tokyo shopping and business mall of Roppongi Hills on June 4, 2008. (Photo by Toshifumi Kitamura/AFP Photo) 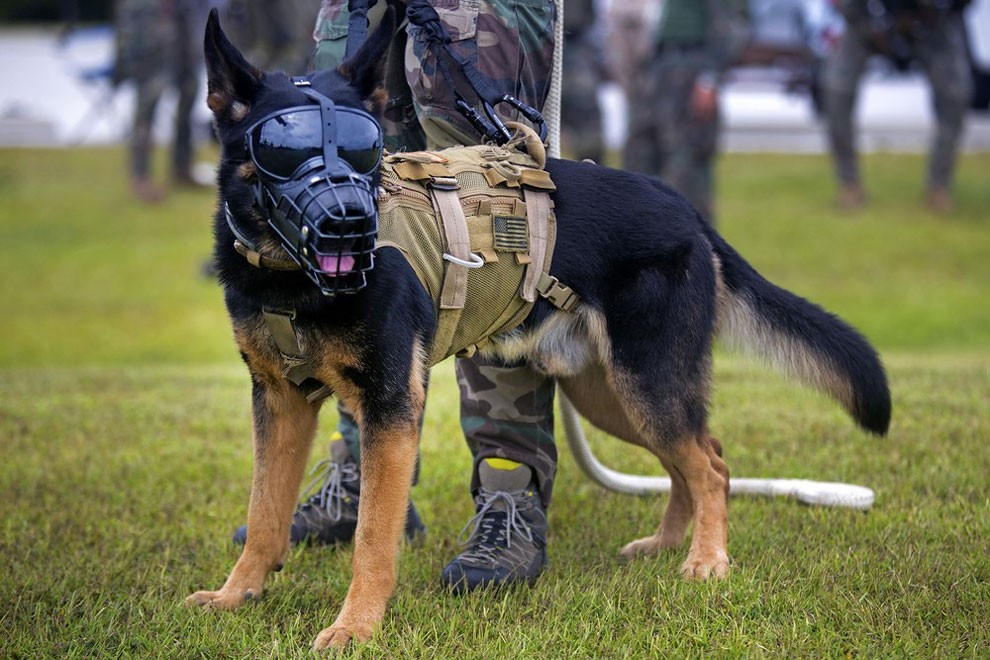 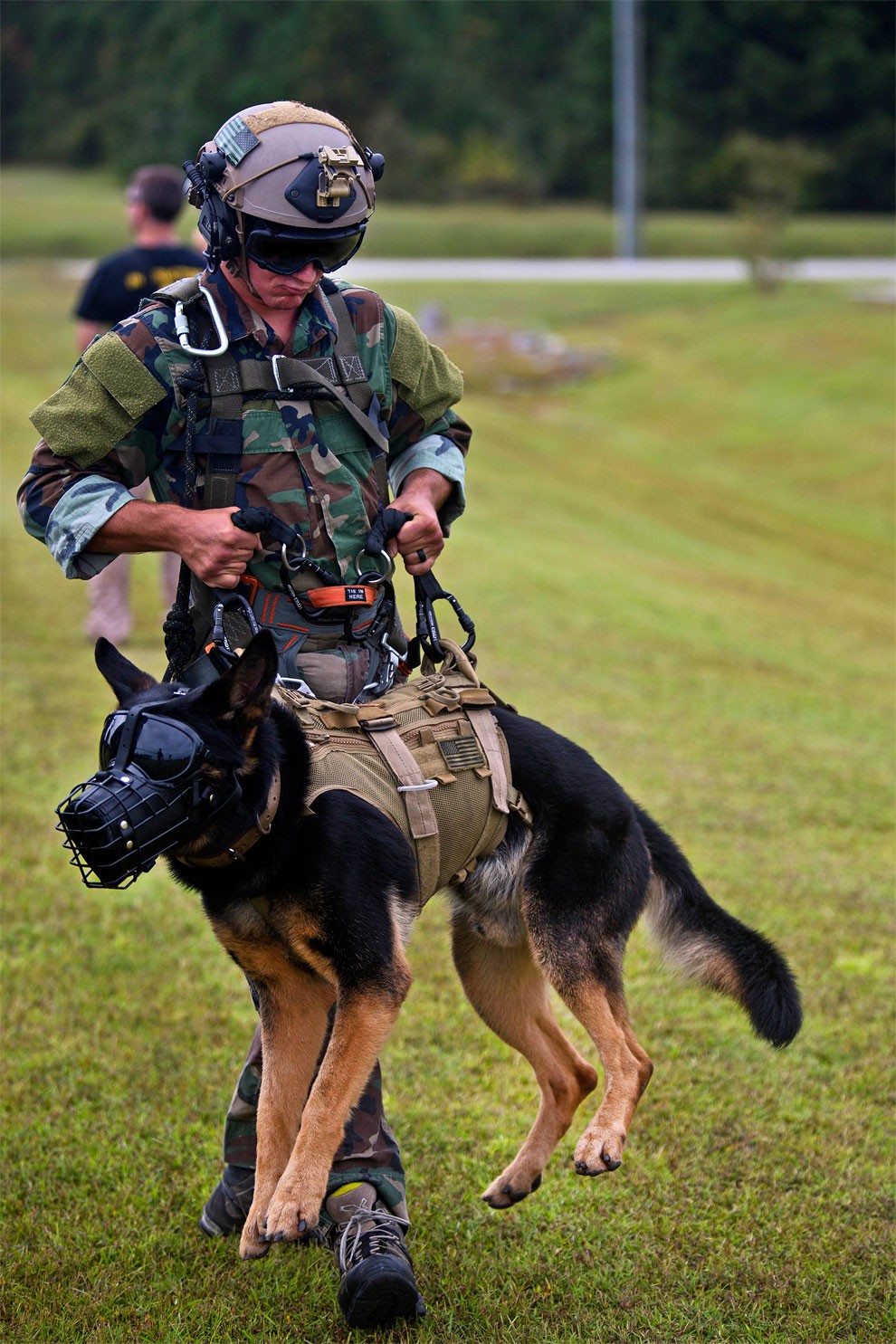 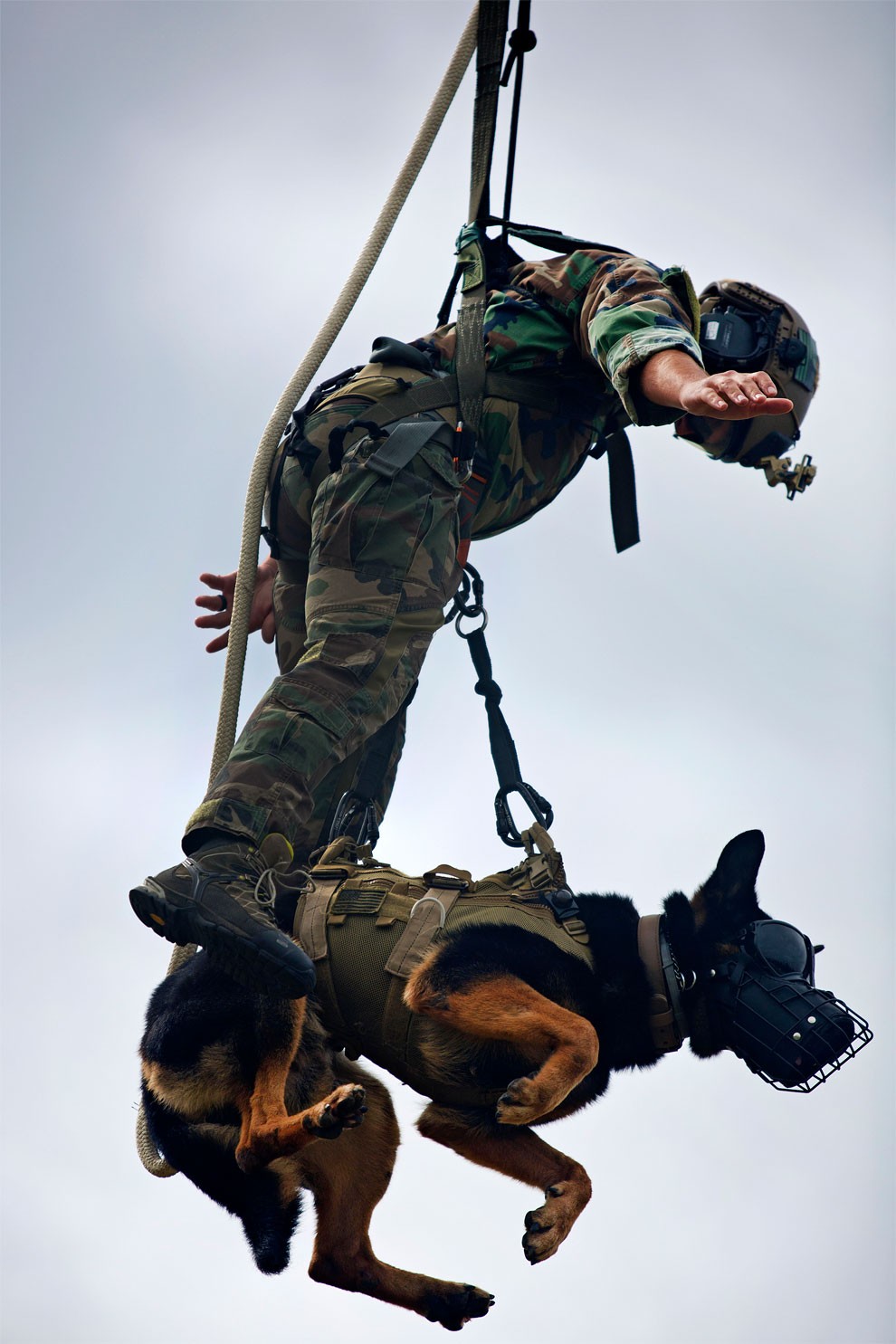 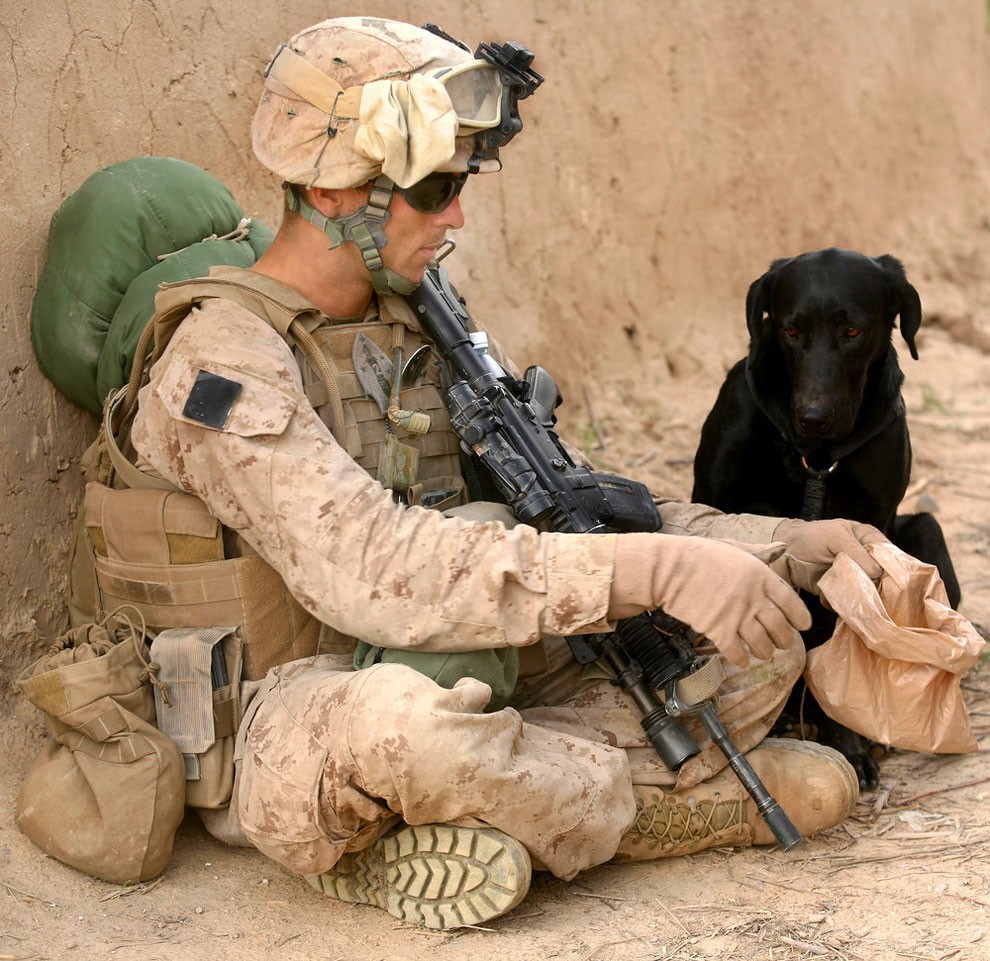 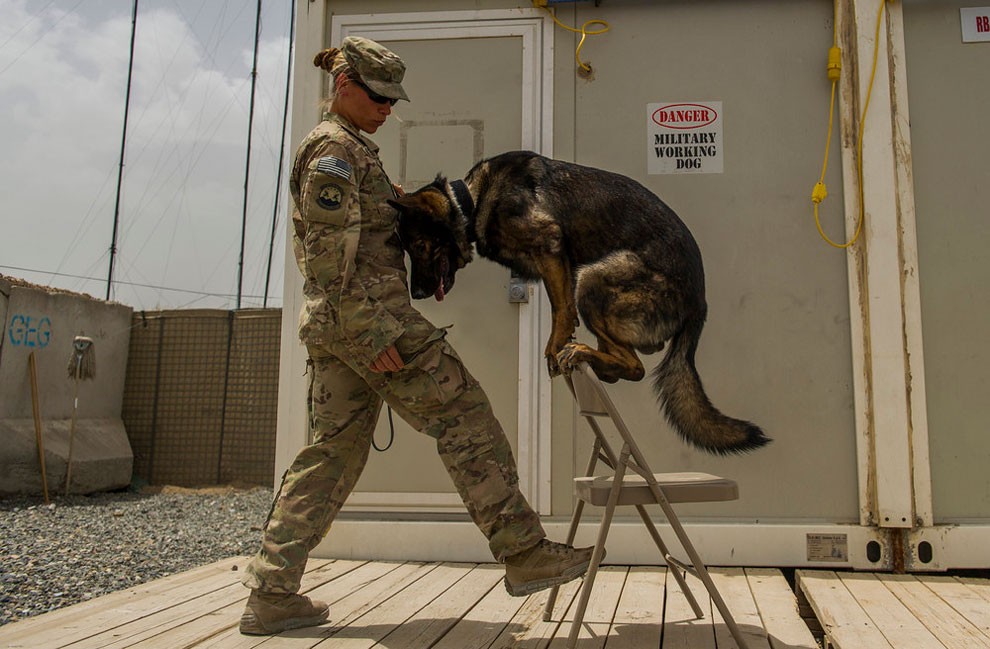 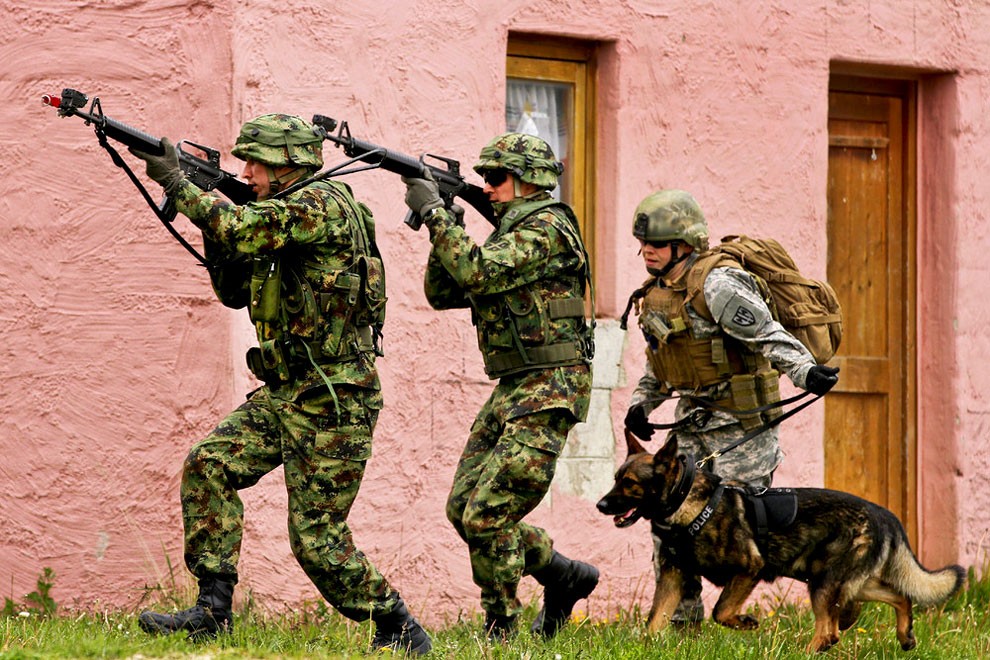 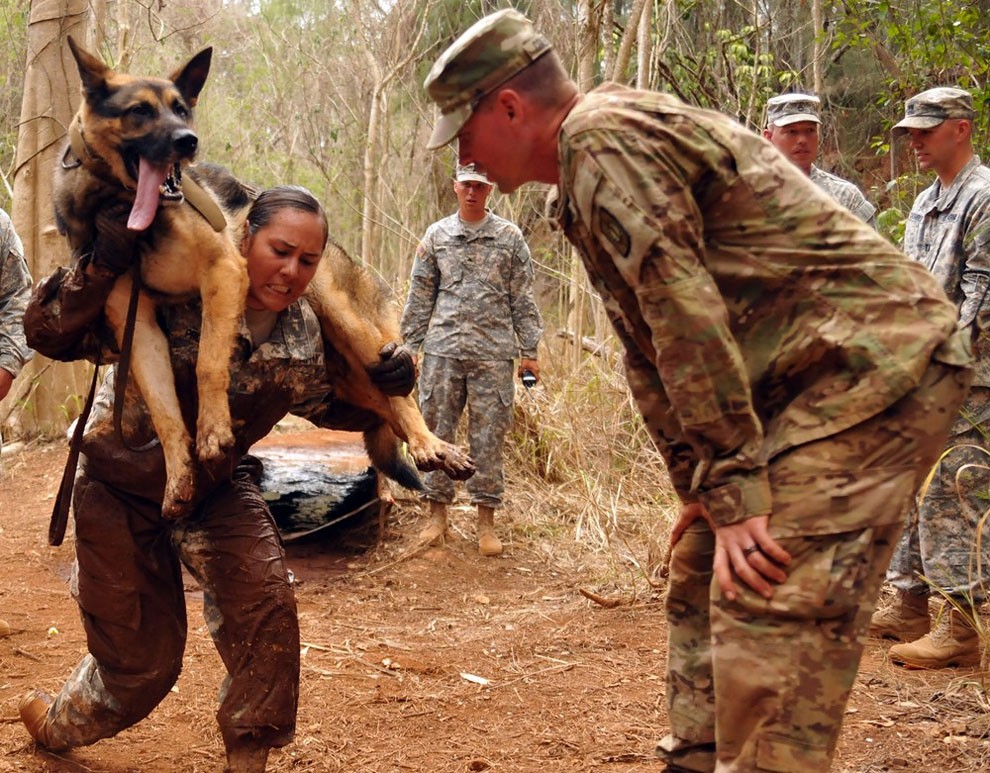 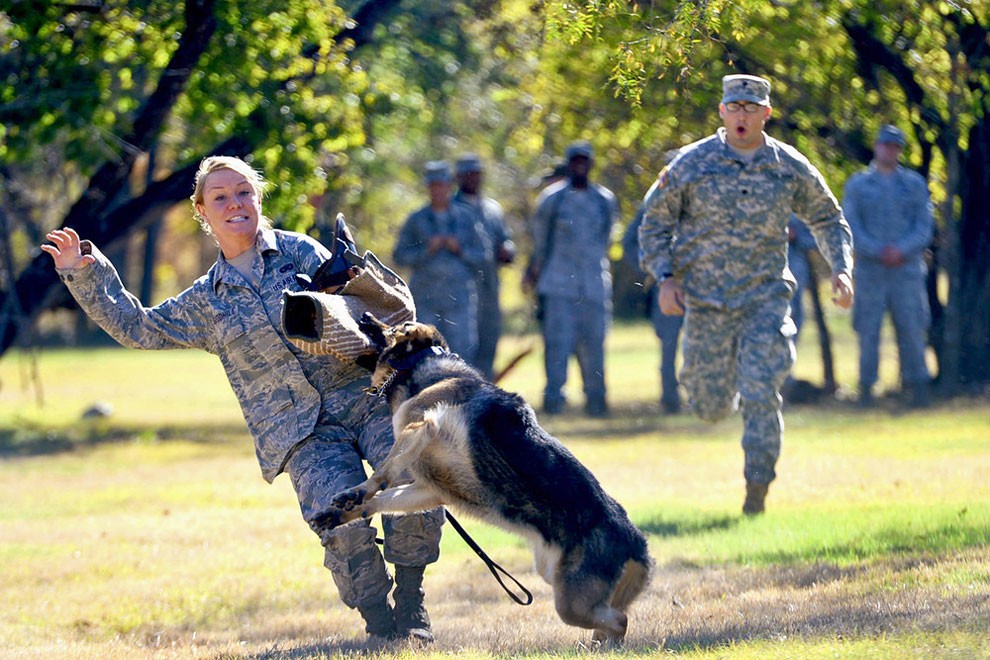 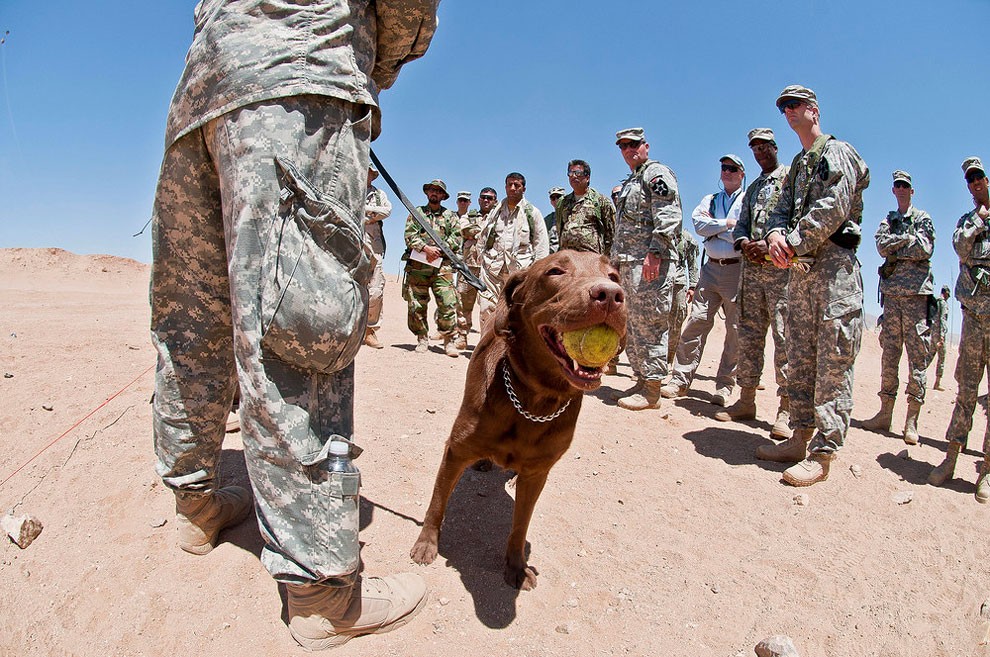 Coba, a 3-year-old chocolate lab and tactical explosives detector dog, chews contently on a tennis ball as David Sheffer, her handler and a dog trainer with Vohne Liche Kennels in Denver, Ind., explains the capabilities of the dog at the National Training Center on Fort Irwin, Calif. (Photo by Sgt. Christopher M. Gaylord/U.S. Army)

National Geographic Photo Contest 2012: A Sneak Peek at the Top Shots
Beautiful Photos Of Siberian Husky Goes For A Walk On A Frozen Lake
Artist Paints Hyper Realistic Animal Portraits That Place Your Own Pet In Historical Settings
Japanese Photographer Snaps Charming Scene Of Cats Playing On Cherry Blossom Tree
The World’s Only Brown Panda Is Becoming A Celebrity
21 Life Lessons From Cats
Pigasso: This Pig Enjoys Painting And Has Become The World’s First Pig Artist
These Pictures Of Cardboard Cat Art Will Make Anyone Laugh
Family Gets A New Pet After Emu Egg Hatches
A Drunk Mountain Gorilla
A Guy Found A Scared Kitten Under A Truck And Just Couldn’t Say No To Her
Face of 4000-Year-Old Dog Revealed by Forensic Reconstruction
Indian Photographer Nitish Madan Captures Breathtaking Moments From The Lives Of Tigers
That Moment When Your Dog Has So Much Fur That You Can Practice Braiding With His Tail
2020 Dog Shaming Calendar Is Here!
Stunning Images Of Jellyfish At The Vancouver Aquarium
World’s Greatest Gallery of Dogs Standing On Mushrooms
This Little Cat Got Stuck In Ice Puddle At Russian -35°C Harsh Weather
This Is A Tiny Hamster Rides Her Own Personal Subway Train
Heartwarming Photos Highlight Adventurous Bond Between Pups and Humans
A Series Of Photos Show The Frogs Hitched A Lift On A Passing Crocodile
Babushka Cats That Look Like Old Russian Ladies
Curious Fox Strikes Up Unlikely Friendship With Polish Photographer
An Adorable Guide To The Dogs Of The World By Geographic Origin By Artist Lili Chin
2007 ‒ 2022 by Design You Trust. Proudly hosted by WebHostingBuzz.
Privacy Policy · Terms of Service · Content Removal Policy ❤️ 🇺🇦