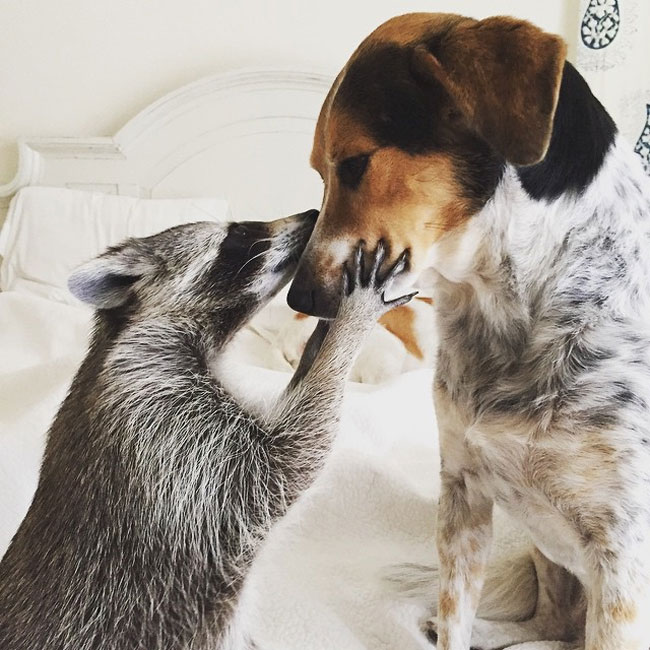 Pumpkin the Raccoon may have an adorable face and a family who adores her, but things weren’t always easy for the lovable creature. When she was only a month old, Pumpkin fell out of a tree and broke her back leg. To make matters worse, the infant animal was incredibly weak and in need of medical attention. That’s when Rosie Kemp found her and waited around for the cub’s mother. After realizing that the mama raccoon wasn’t going to return, Kemp decided to adopt baby Pumpkin and to give her a chance at a happy, healthy life. 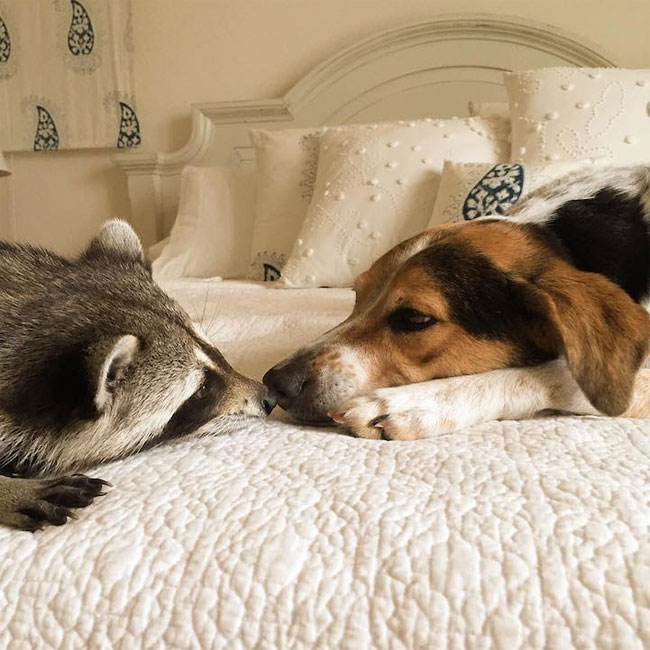 Thanks to the Kemp family’s round-the-clock care, Pumpkin’s health was soon restored.

“Raising her was (and still is) a full-time job,” Kemp’s daughter, Laura Young, told The Dodo. “They are so unbelievably intelligent, very aware, and I would say they are even able to express emotions.” 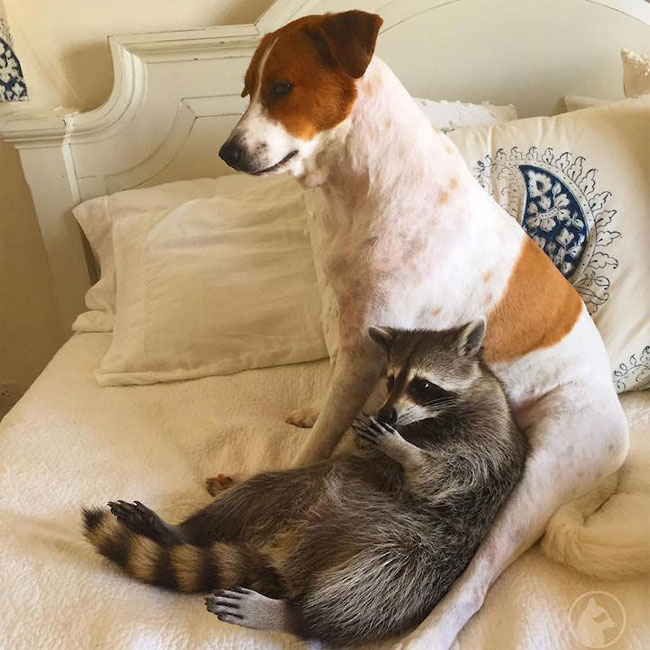 Now, Pumpkin’s days are filled with exploring, relaxing in front of the air-conditioner, eating her favorite treats, and taking plenty of Instagram snapshots. She’s even learned to use the toilet! Interestingly enough, the raccoon also became close friends with the family’s other pets. 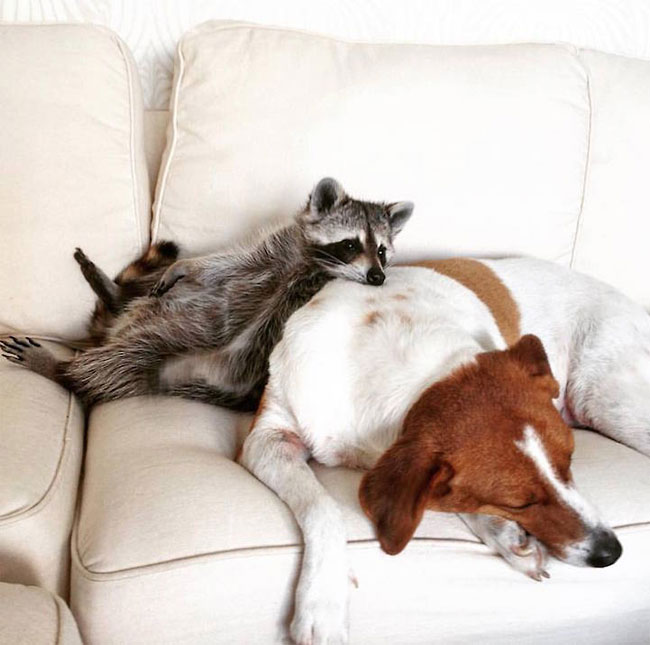 “She instantly bonded with us and our two rescue dogs and follows me and our two dogs everywhere we go,” Young said. “She now thinks she is a dog…she is able to play and be rough with them and she respects them when they have had enough.” 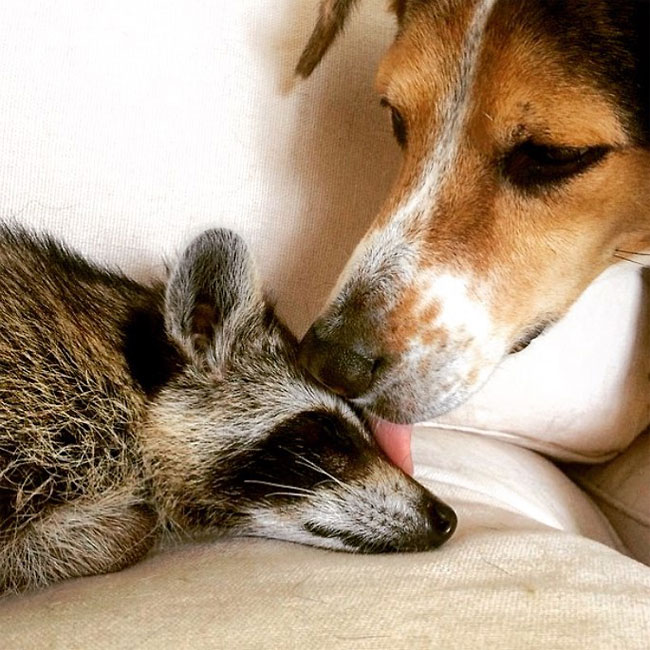 It’s also important to note that both Pumpkin and her owners live in the Bahamas, where there are no raccoon rescues. Here, it’s perfectly legal for residents to care for these creatures. 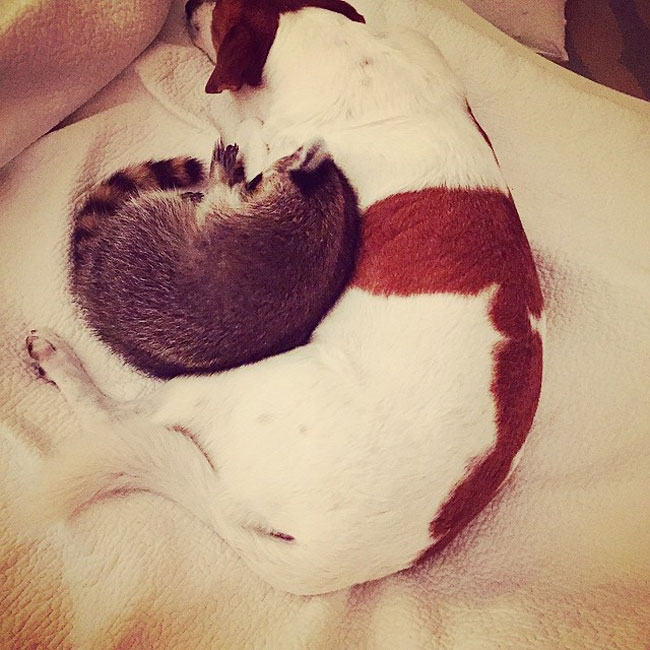 “Raccoons are NOT pets,” Young explains. “They are wild animals, so they are quite moody. Unlike dogs and cats, they are not domesticated. Like a spoilt child if she doesn’t get her way, she will let you know.” 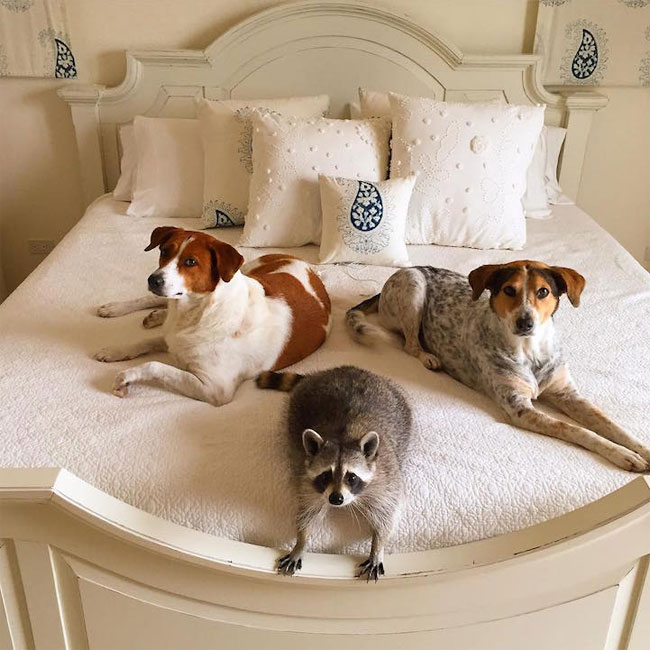 Despite living this unusual life, the Kemp family is dedicated to making Pumpkin as happy as she can be. 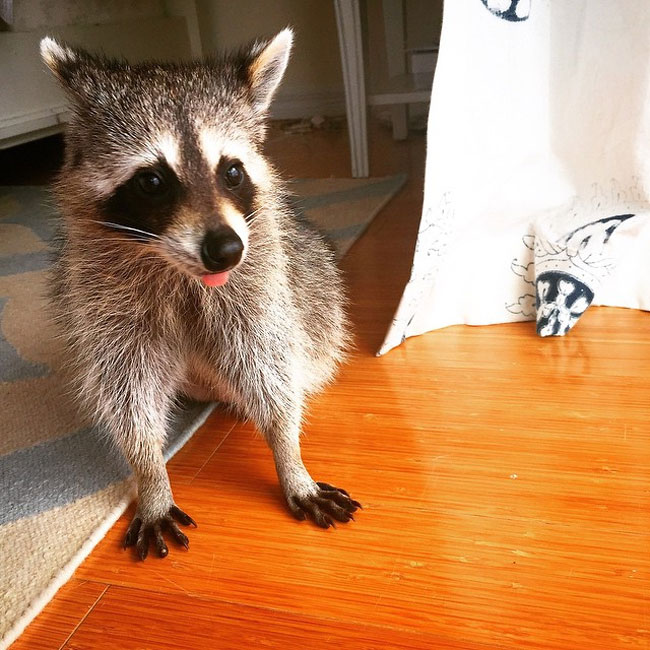 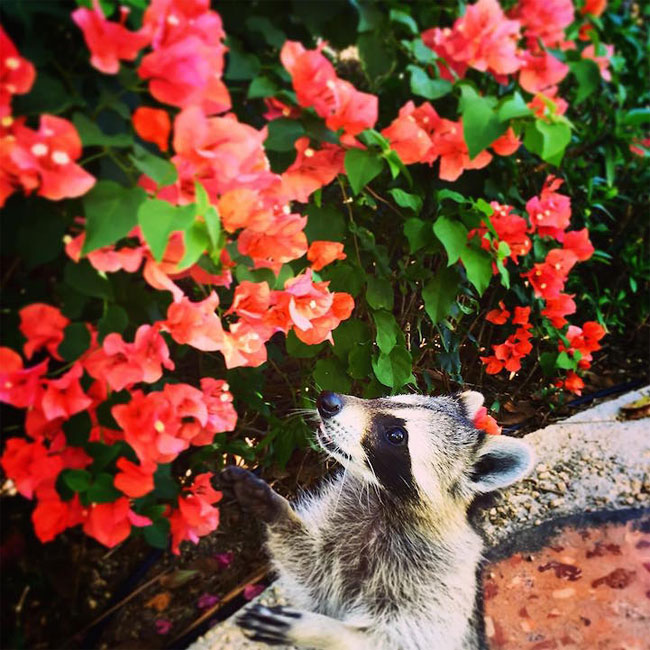 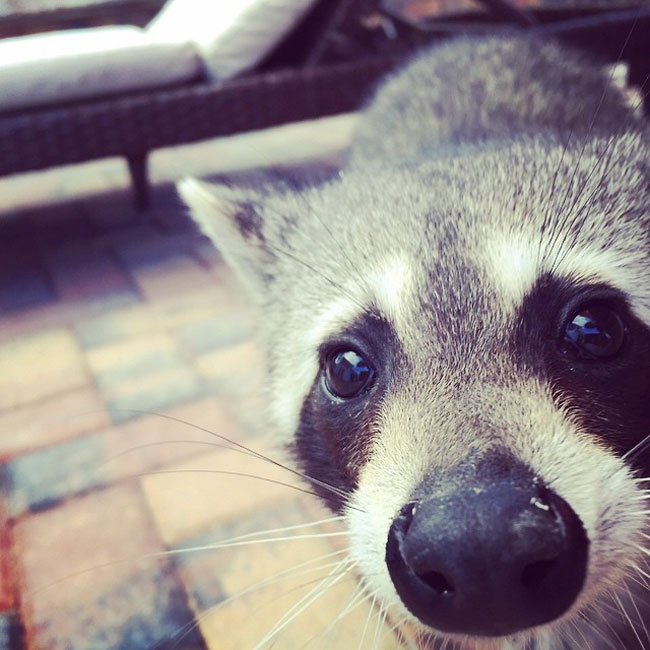 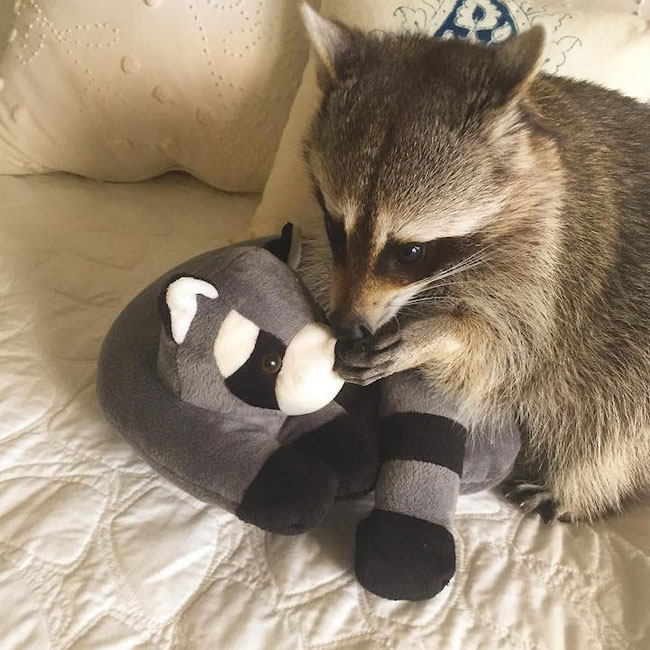 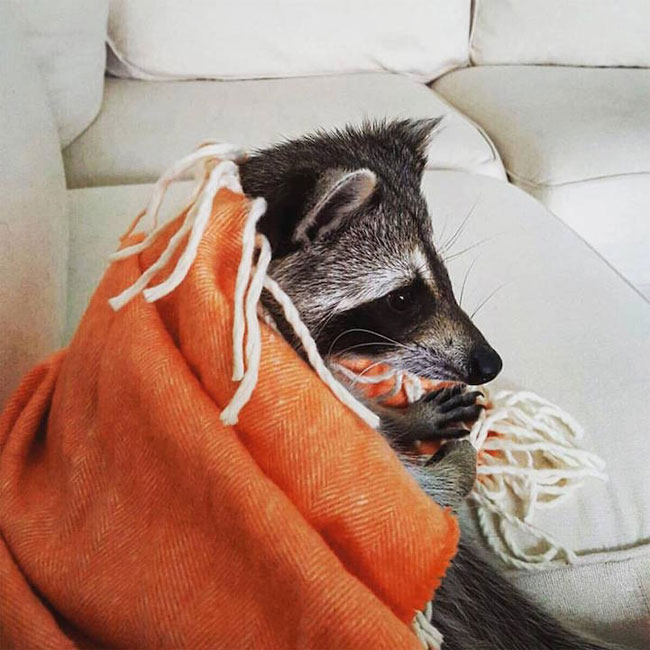 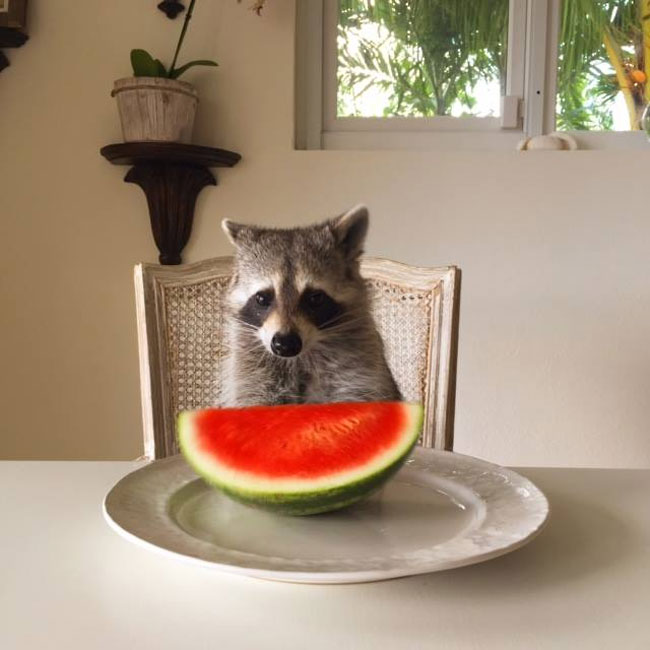 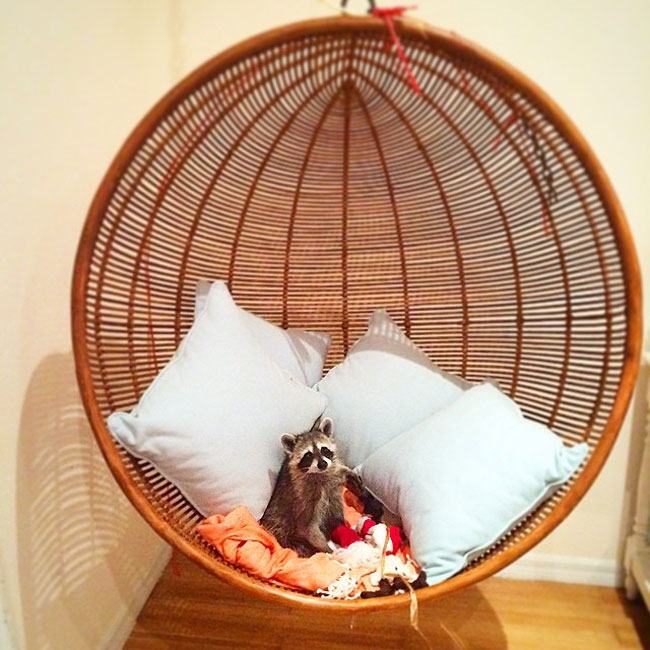 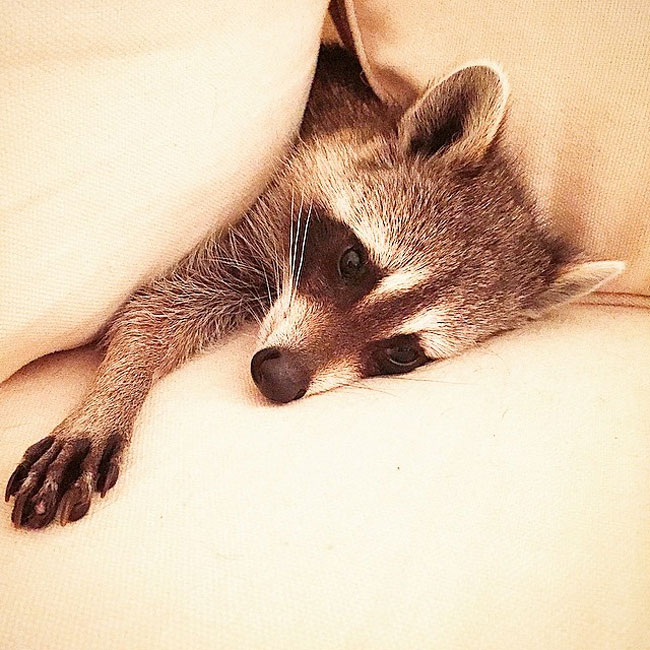 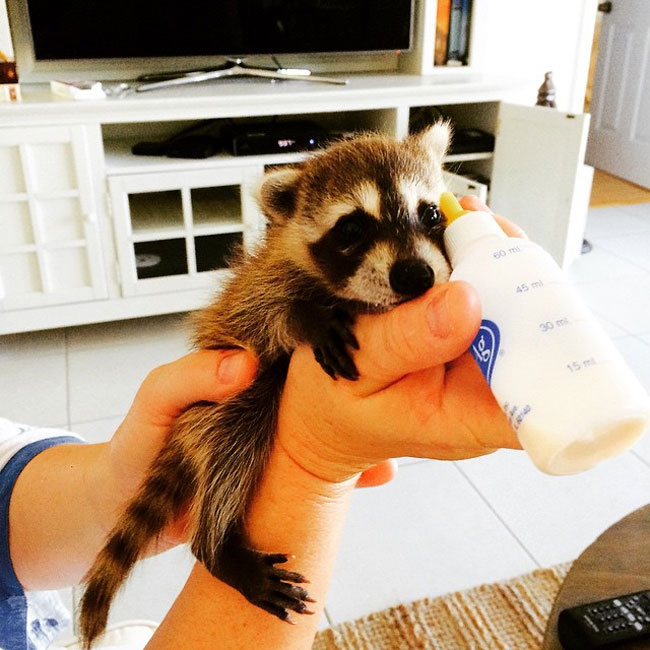 Via My Modern Met, The Dodo

This Artist Uses A Powerful Projector To Create His ‘Crying Animals’ Series, That Showcases Endangered Specie
Giant Eyeball Found on the Beach
Before LOLCat, There Were The Felines Featured In "Kittens And Cats: A First Reader"
When Dozens Of Whales Arrived In Small Newfoundland Town, This Photographer Took Out A Drone To Take These Aerial Pics
Take A Look At This Cute Adopted Cat With Funny Markings
Scotland's Fattest Hedgehog Refuses to Go Back to Nature
Guy Without A Date Does Epic Photoshoot With His Pug Instead
The Internet's Most Favorite Animal Captured In Beautiful Portrait Photographs By Felicity Berkleef
The Laughing Seals
Orangutan Brothers Damai and Rizki
Dog Pants Are All The Rage This Year In Pet Fashion
Three Little Liligers Cavort at Russian Zoo
Cheerful Portraits Of Cats Shaking Themselves Clean
BooBoo the Guinea Pig
Adorable Cats And Kittens Flying Through The Air By Seth Casteel
British Dog Lover Spends £30,000 On Her Nine Pets
After Their Wedding, This Couple Did What Many Of Us Have Always Dreamed Of Doing
Russian Fisherman Posts Terrifying Creatures Of The Deep Sea, And People Want Him To Stop
Einstein: The World’s Smallest Horse
Terrier Meysi is the World’s Smallest Dog
Photos Show Mother Hippopotamus Taking a Chunk Out of Crocodile in South Africa
Photographer Continues To Dress Up Rescued Dogs To Draw Attention To Their Stories
This Little Cat Got Stuck In Ice Puddle At Russian -35°C Harsh Weather
ZSL Animal Photography Prize 2015
after, being, orphaned, raccoon, rescued, thinks

Monty the Cat Without a Nasal Bone
Thousands of Birds Take Flight for the “Snettisham Spectacular”
The Weird World of Competitive Dog Grooming
After The Apocalypse: Emotionally Impacting Illustrations By Jonas De Ro
Turn Your Cats Into Furry Train Conductors With Colorful Cardboard Trains
Daredevil Photographer Recreates Iconic "Jaws" Movie Poster
Cat Fashion Show at the Algonquin Hotel
12 Charts That Perfectly Sum Up Being In A Long Distance Relationship
This Dog Muzzle Is Perfect To Scare The Hell Out Of Neighbors On Halloween
Wonderfully Interpretive Paper Collages Depicting Popular Cats And Dogs Of Instagram
2007 ‒ 2022 by Design You Trust. Proudly hosted by WebHostingBuzz.
Privacy Policy · Terms of Service · Content Removal Policy ❤️ 🇺🇦