The Sergei Mikhailovich Prokudin-Gorskii Collection features color photographic surveys of the vast Russian Empire made between ca. 1905 and 1915. Frequent subjects among the 2,607 distinct images include people, religious architecture, historic sites, industry and agriculture, public works construction, scenes along water and railway transportation routes, and views of villages and cities. An active photographer and scientist, Prokudin-Gorskii (1863-1944) undertook most of his ambitious color documentary project from 1909 to 1915. The Library of Congress purchased the collection from the photographer’s sons in 1948. 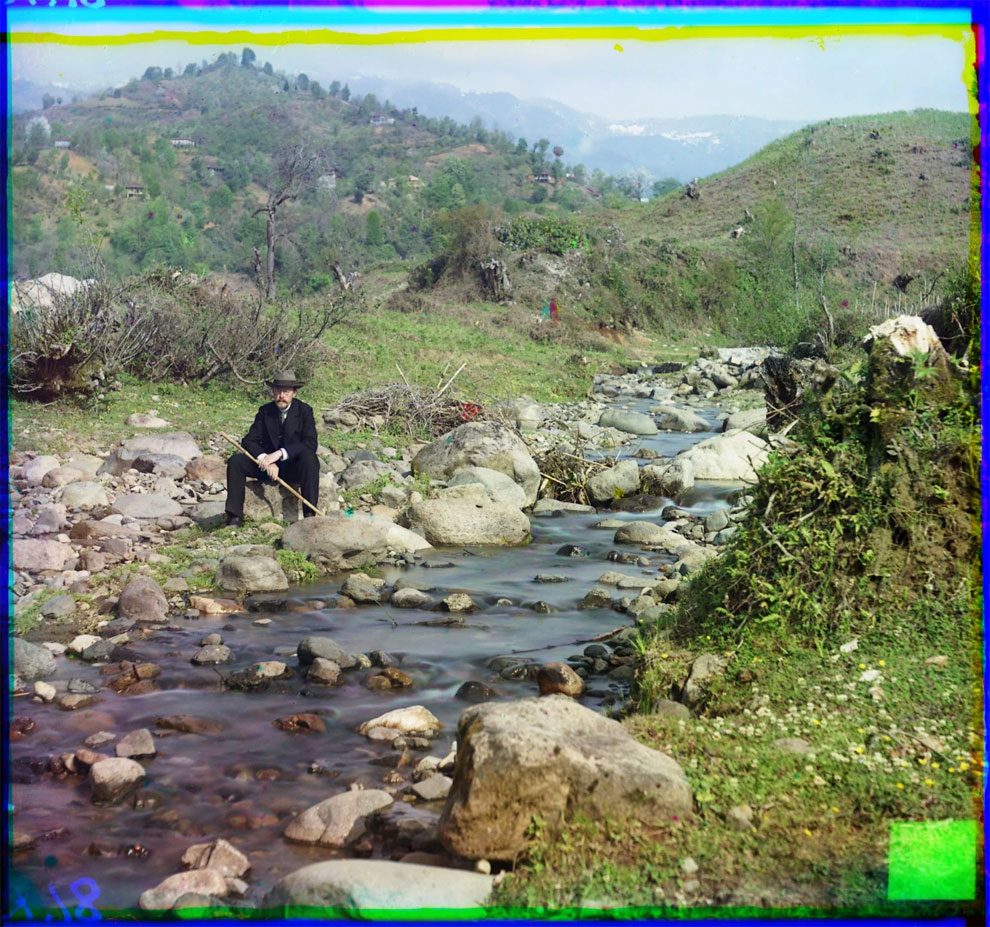 Catholic Armenian women in customary dress. (between 1905 and 1915) 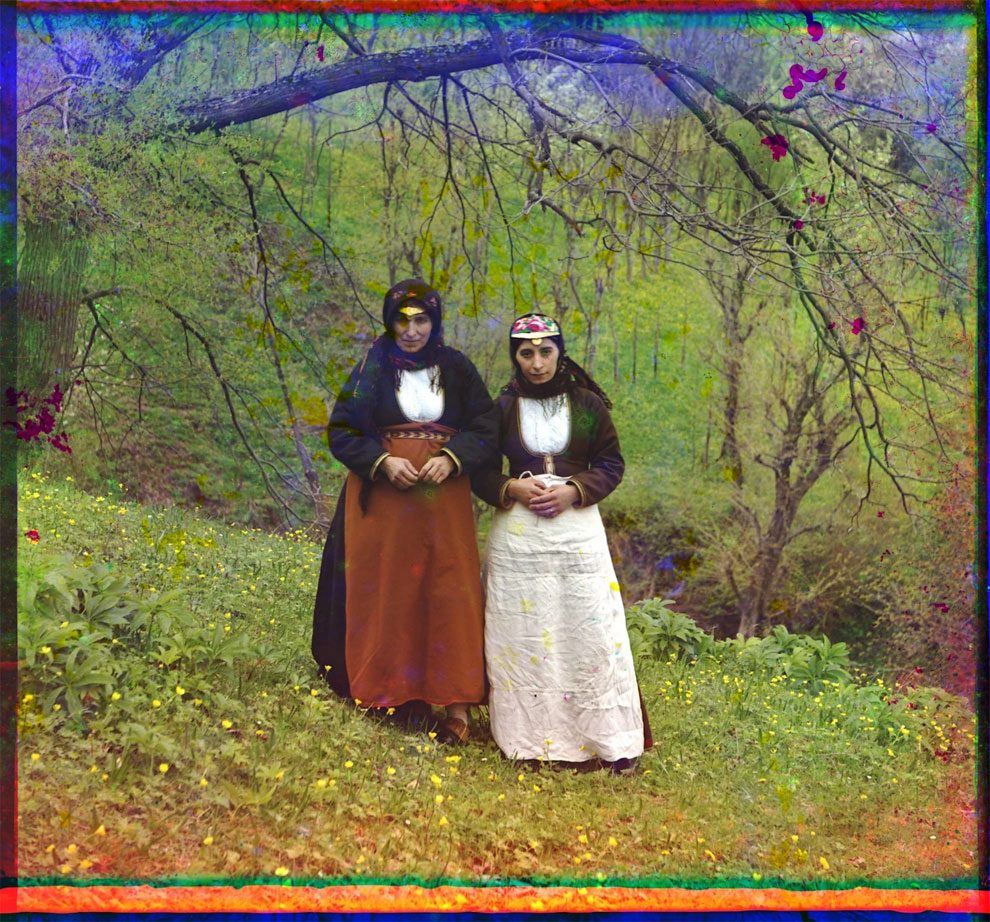 Pinkhus Karlinskii. 84, supervisor of the Chernigov floodgate, with 66 years of service. (1909) 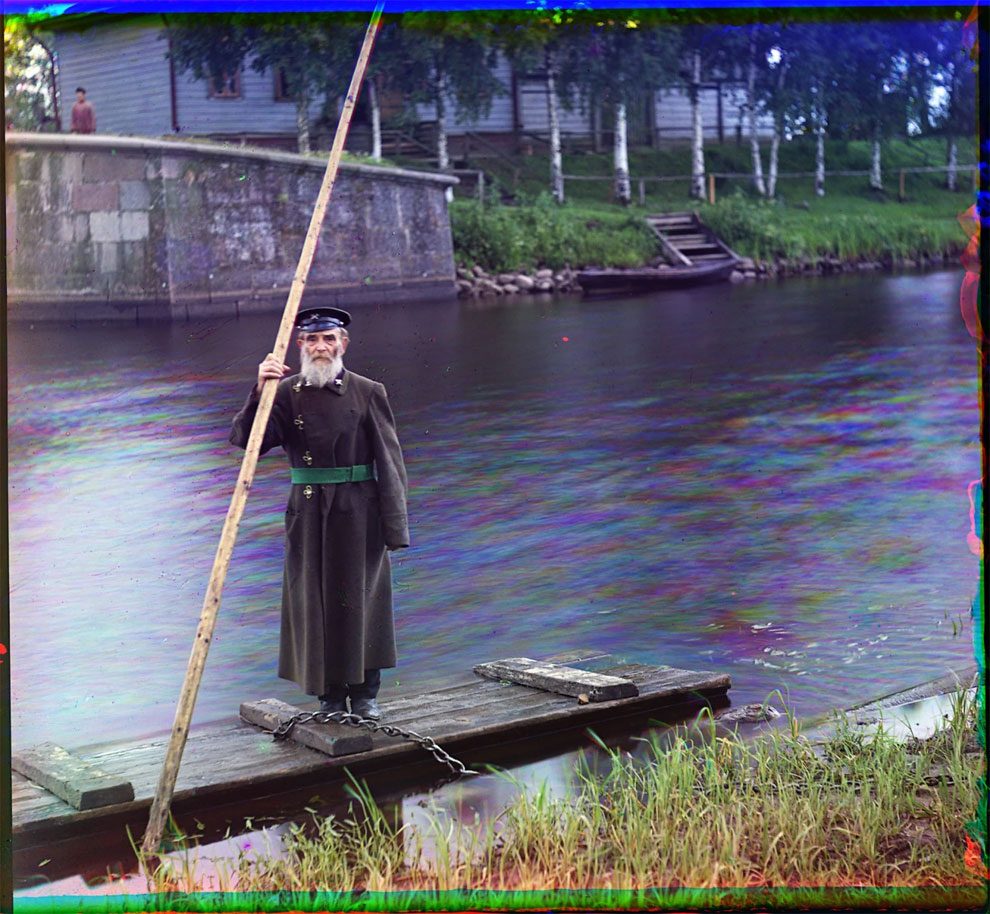 “In the composite image below, I used Adobe Photoshop to recreate the process of converting three black and white frames into a full color image.”, writer Dan Murano says to Washington Post.

Three young women offer berries to visitors to their izba, a traditional wooden house, in a rural area along the Sheksna River, near the town of Kirillov. (1909) 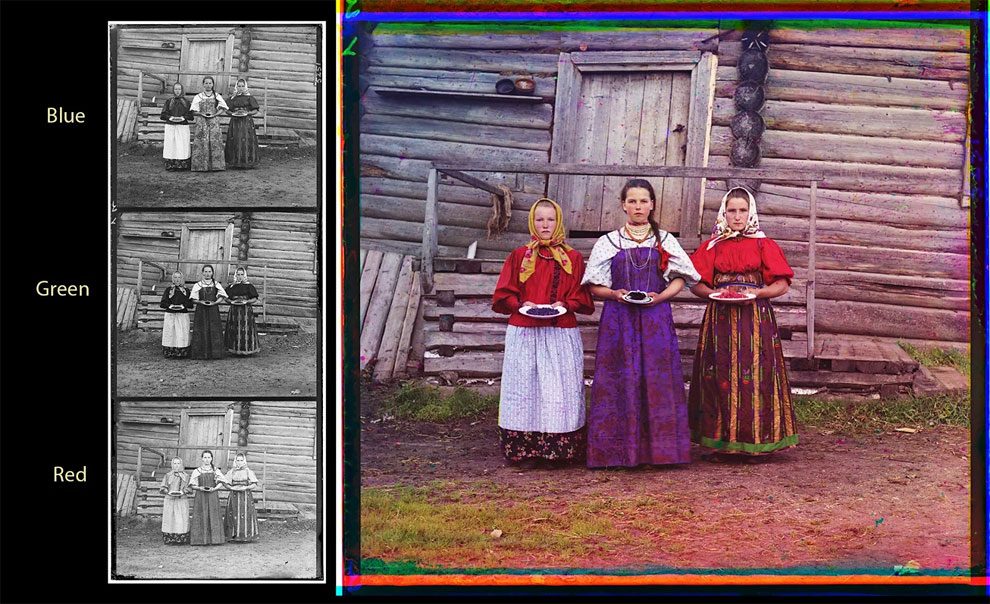 “In the black and white strip on the left, the filter sequence is blue, green and red.

First, I created a blank RGB (red/green/blue) file in Photoshop that was the size and resolution of one of the individual frames. I then copied each of the frames into the corresponding color channel of the Photoshop file. A simple lining up of the channels resulted in the full color image on the right.

Ghosting in Prokudin-Gorskii’s color images is caused by any misalignment between the successive exposures. Probable reasons for this are subject movement and/or movement of the negative plate between the exposures.” 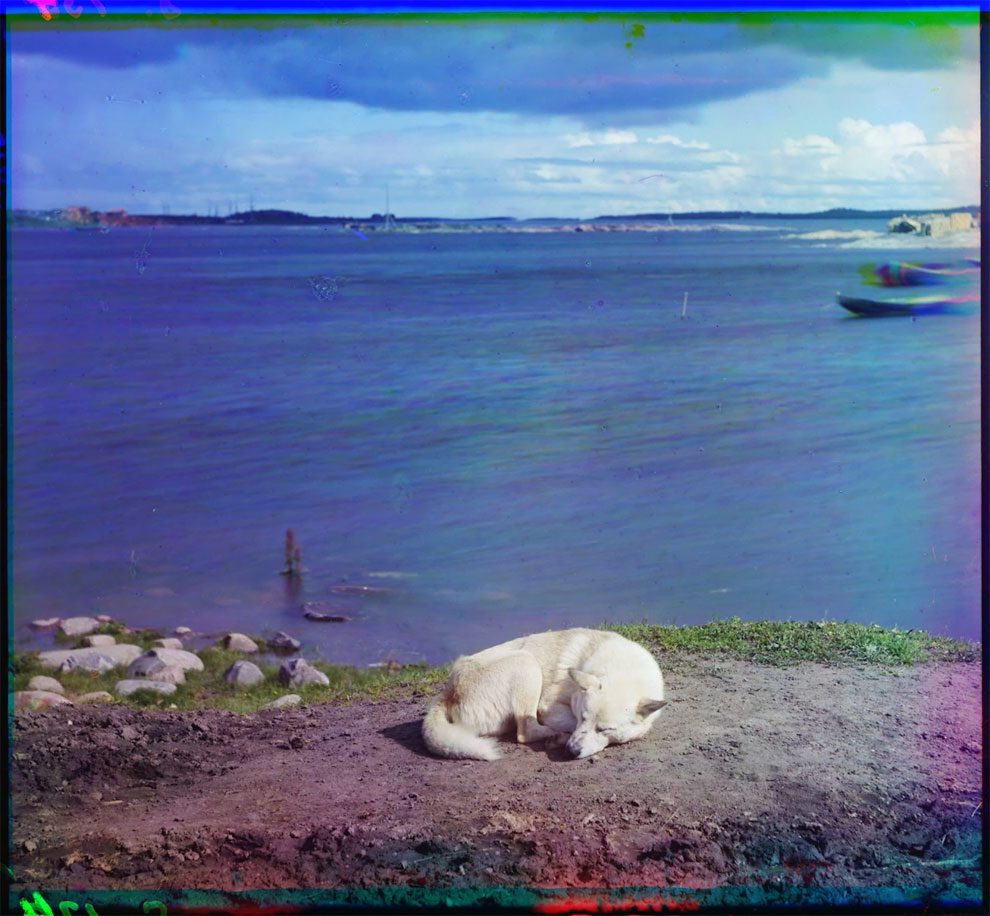 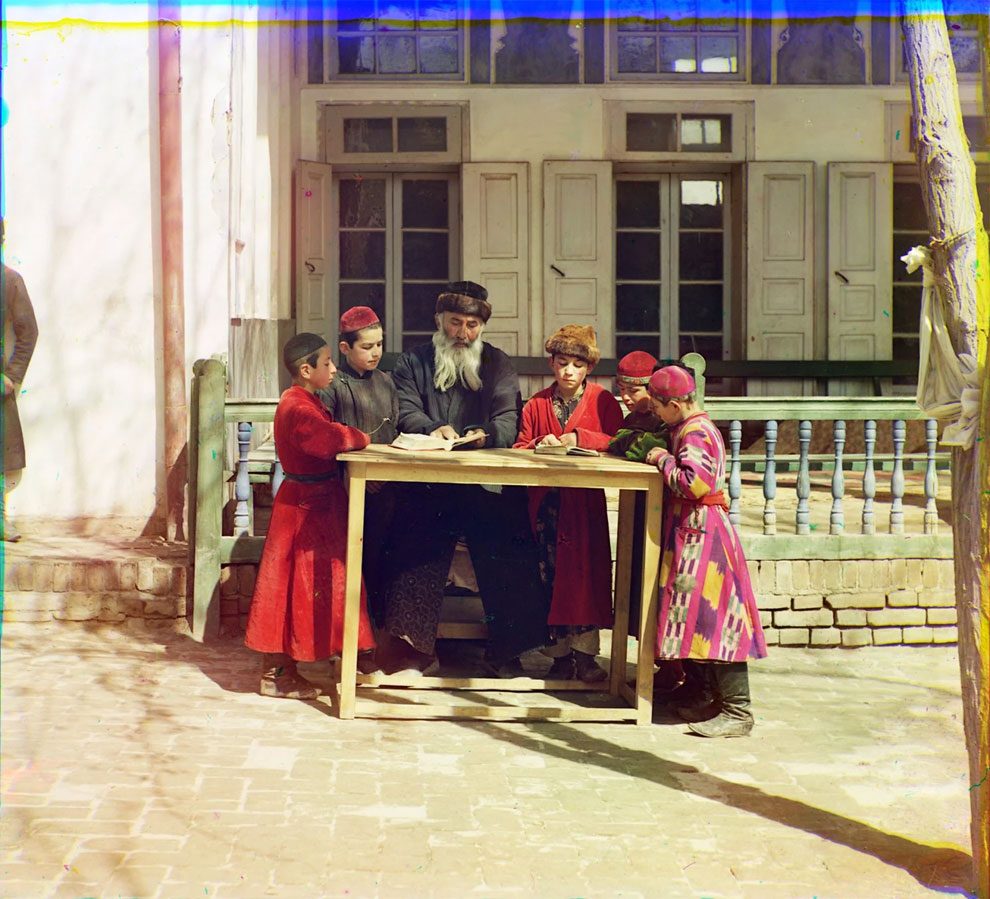 Wooden Church of the Transfiguration of Our Lord. The village of Pidma. [Russian Empire] (1909) 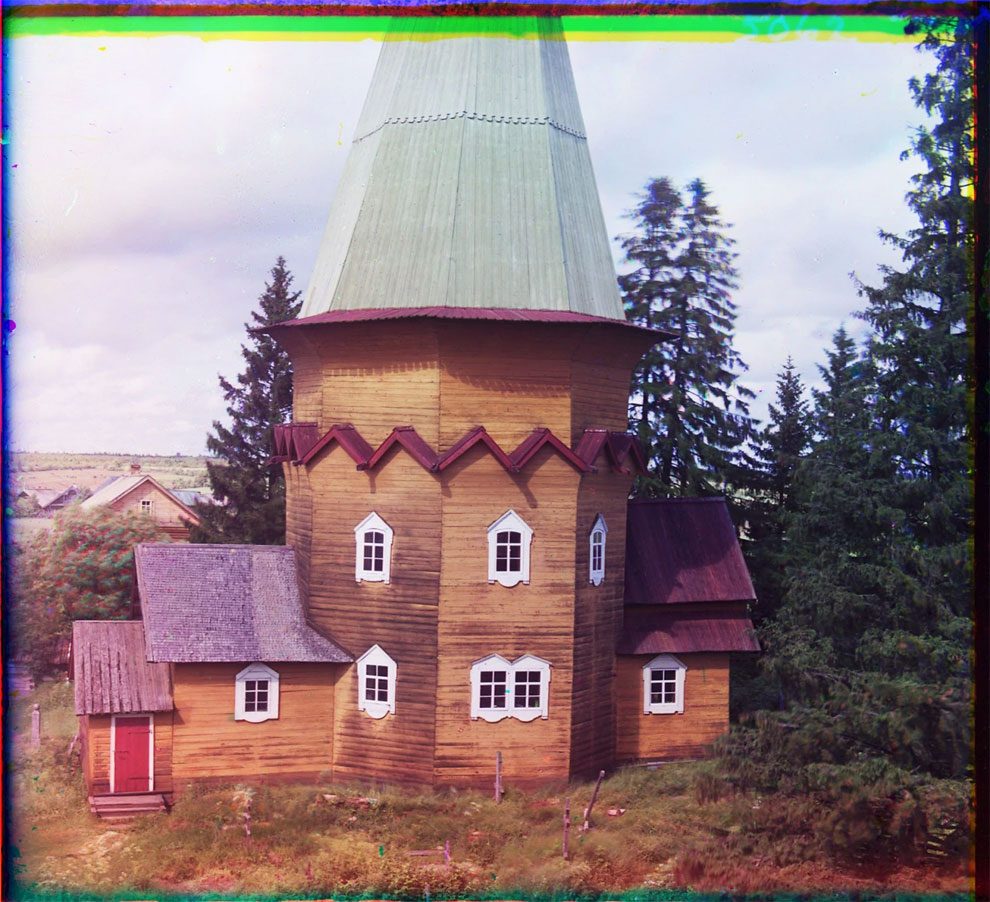 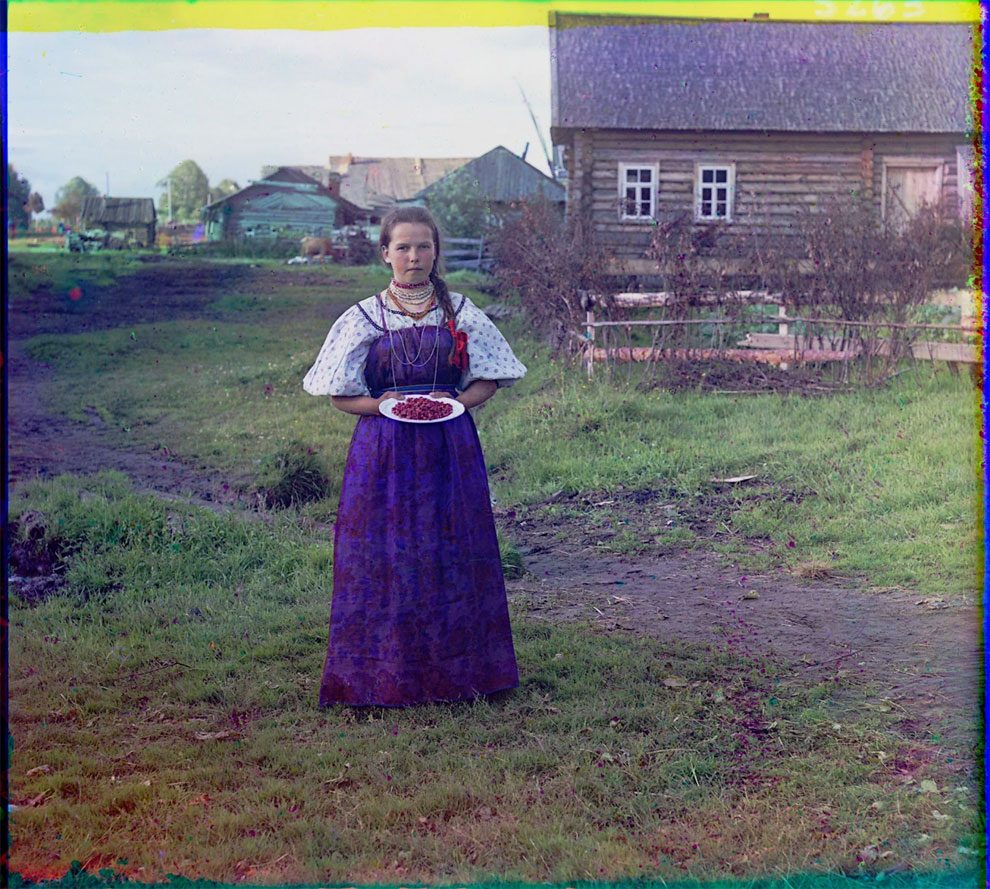 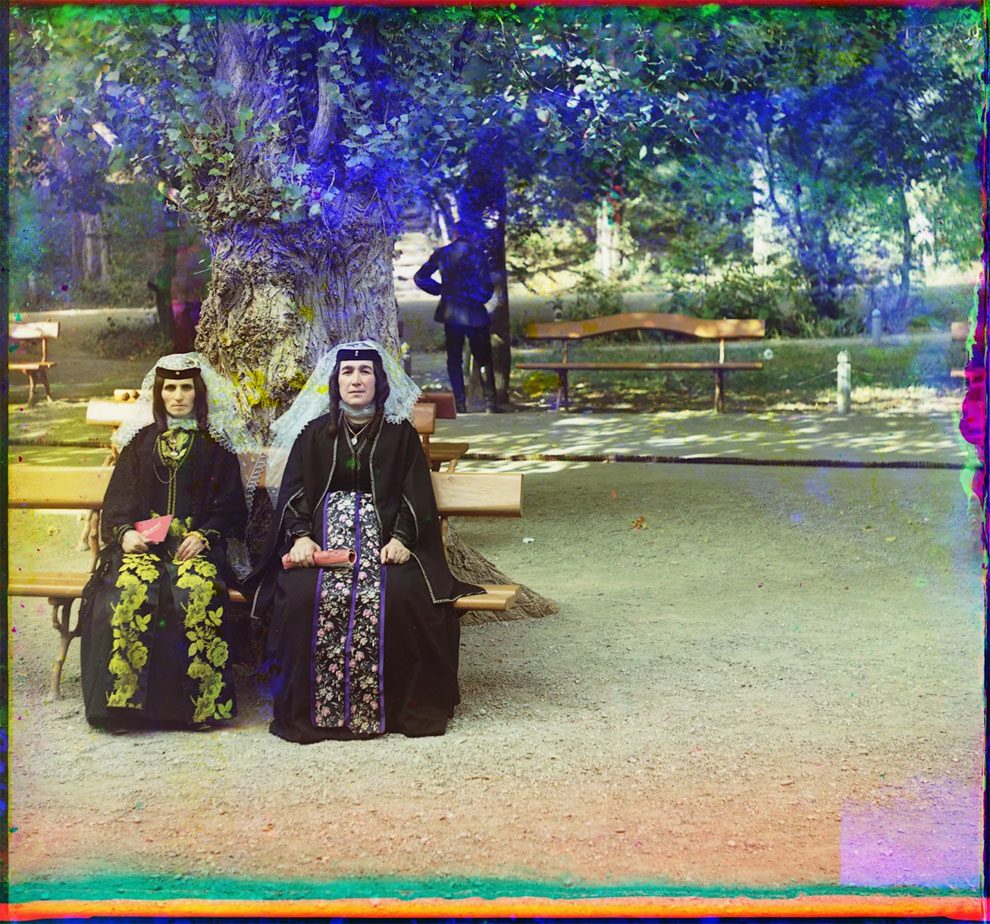 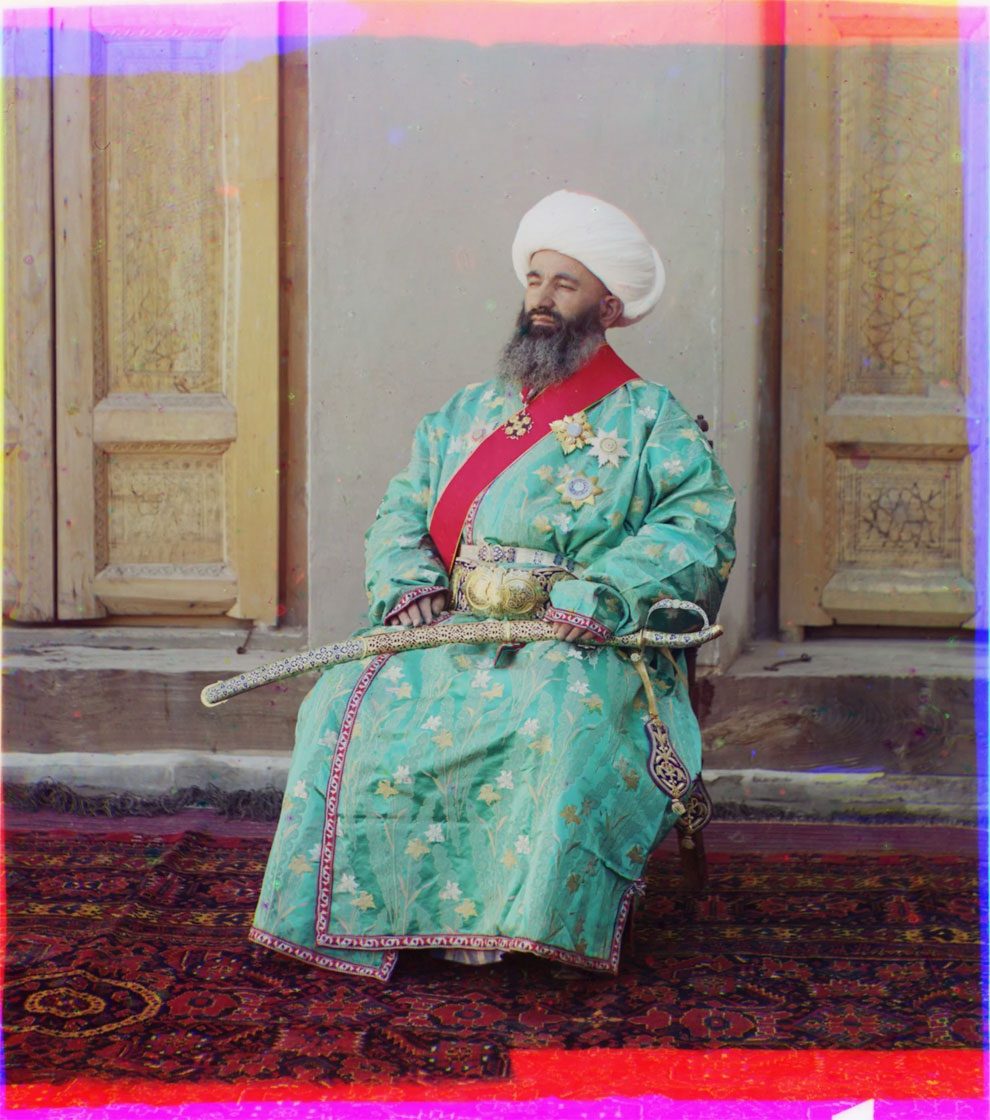 Three generations. A.P. Kalganov with son and granddaughter, who work in the shops of the Zlatoust arms plant. (1910) 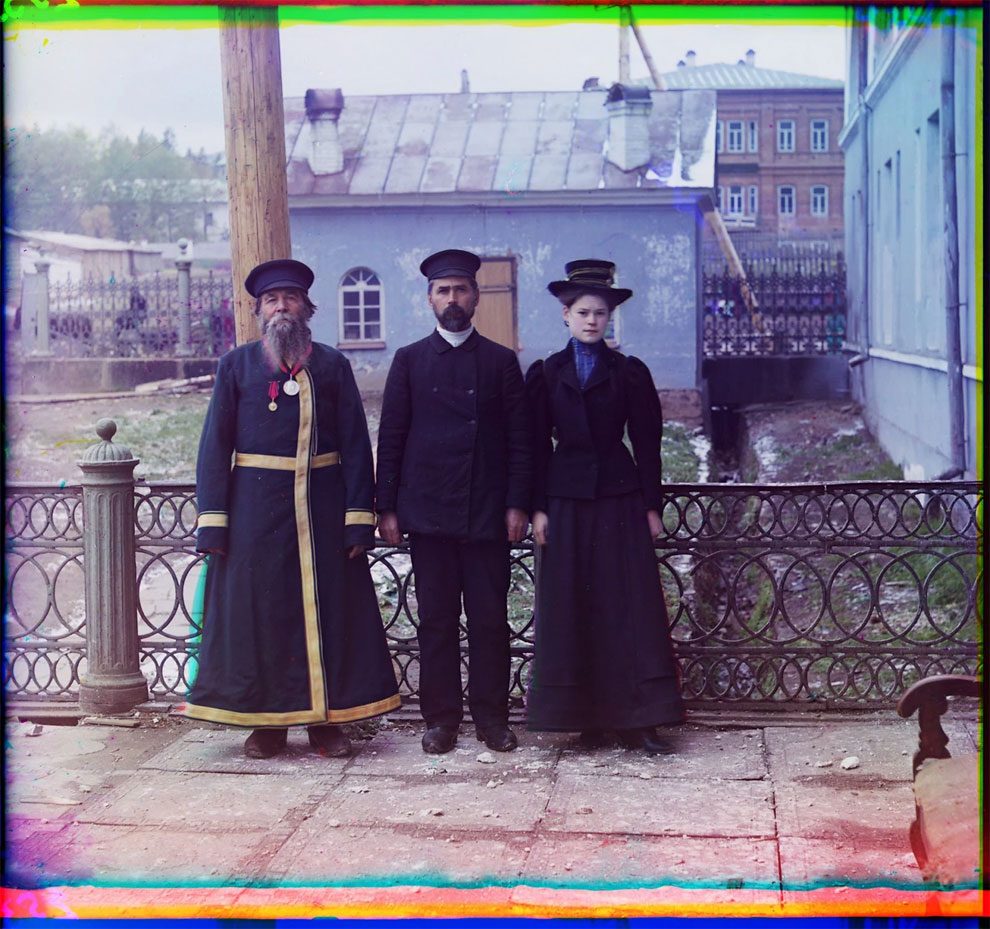 Zindan prison, with inmates looking out through the bars and a guard with Russian rifle, uniform, and boots, Central Asia. (between 1905 and 1915) 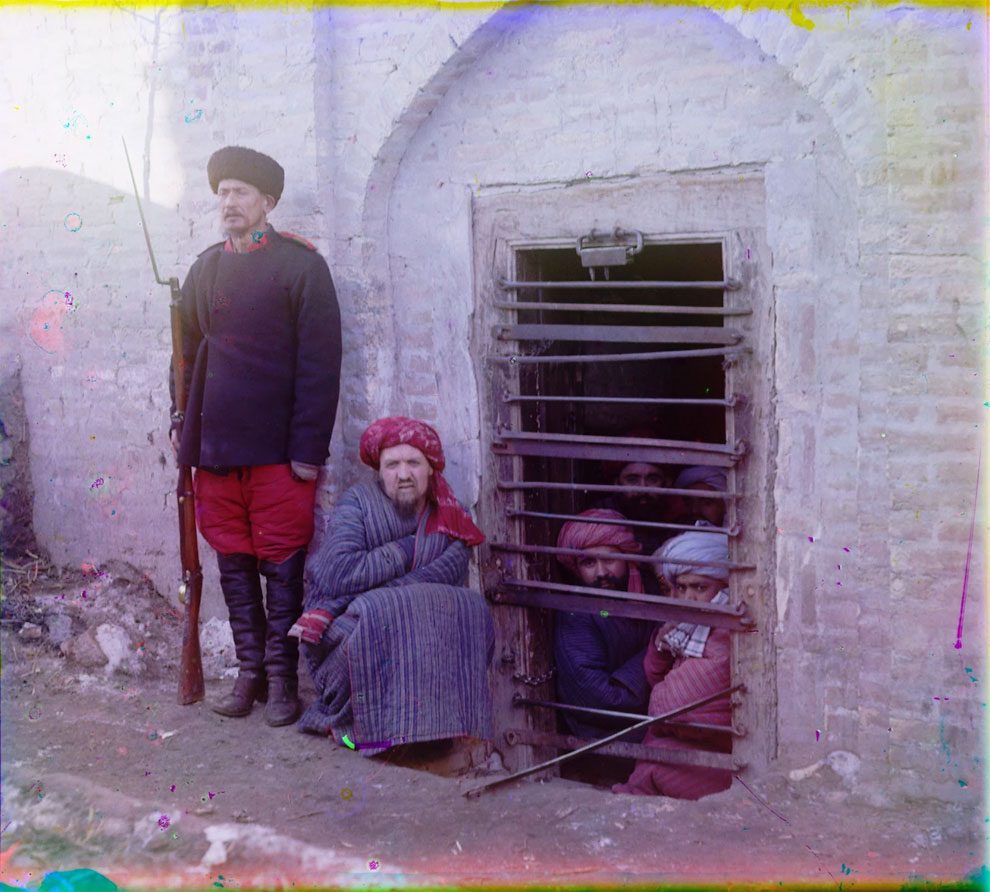 Railroad construction on the Shadrinsk-Sinara railroad near the city of Shadrinsk. (1912) 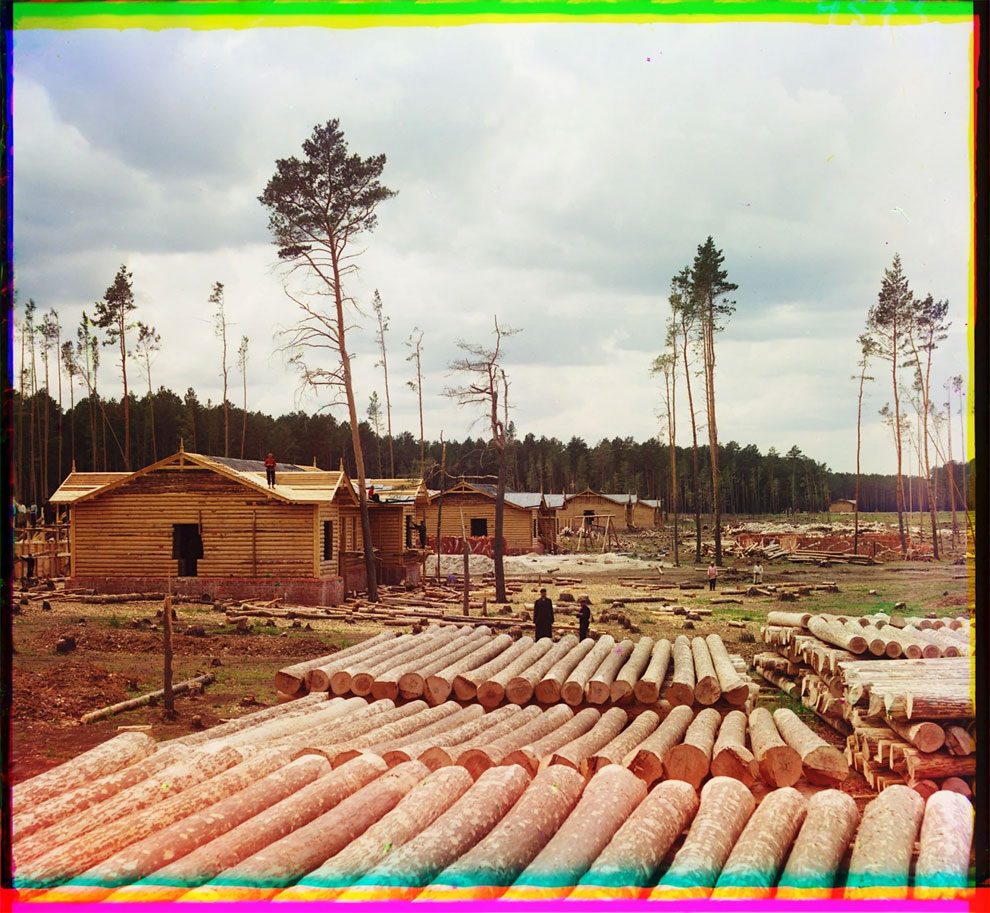 A switch operator poses on the Trans-Siberian Railroad near the town of Ust Katav on the Yuryuzan River. (1910) 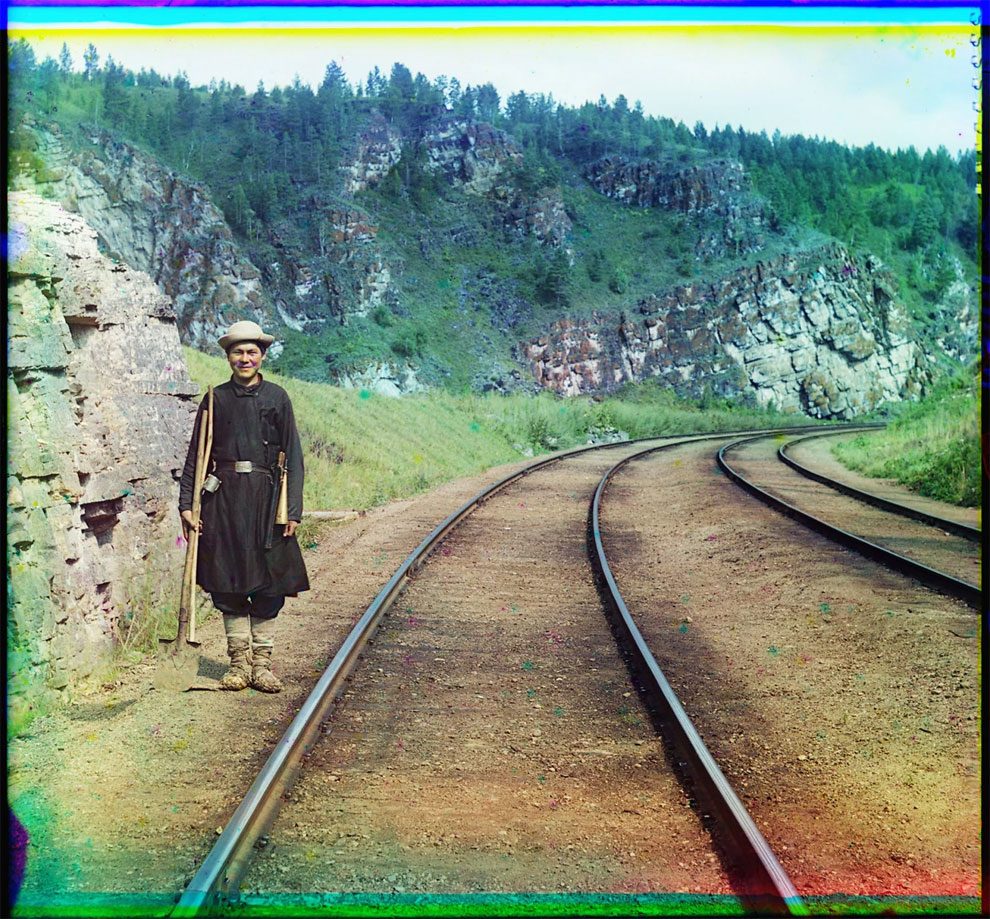 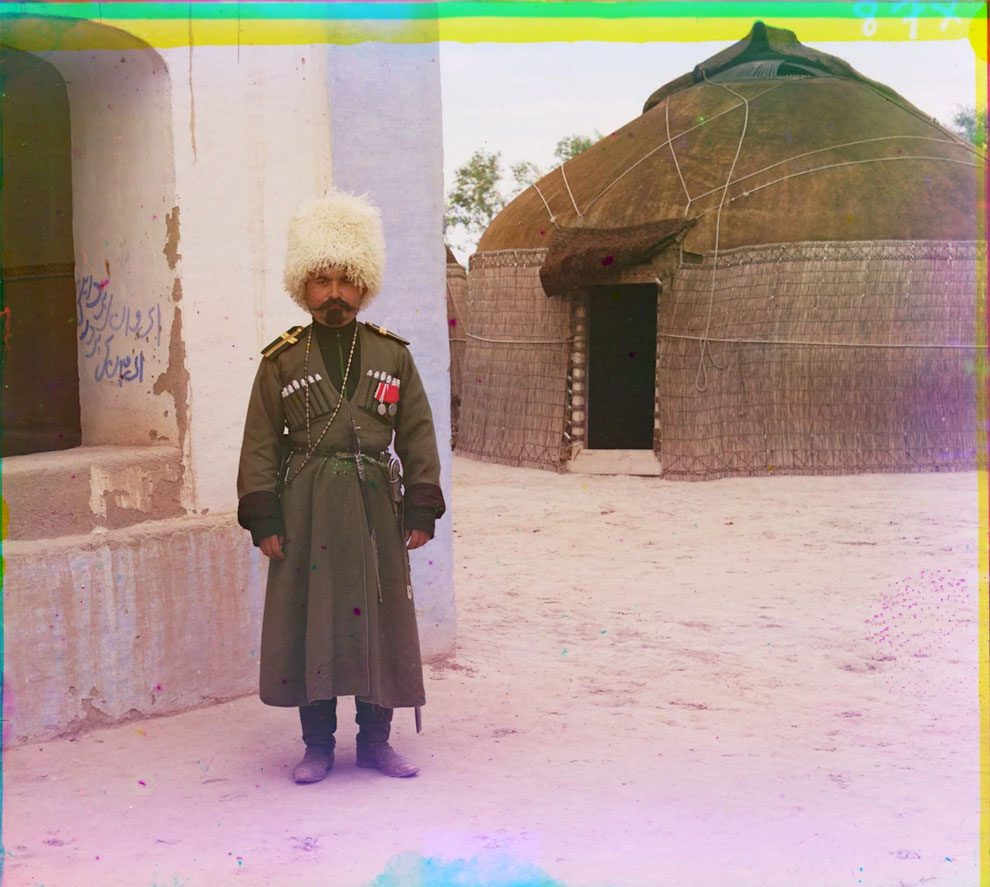 Isfandiyar, Khan of the Russian protectorate of Khorezm (Khiva). (between 1910 and 1915) 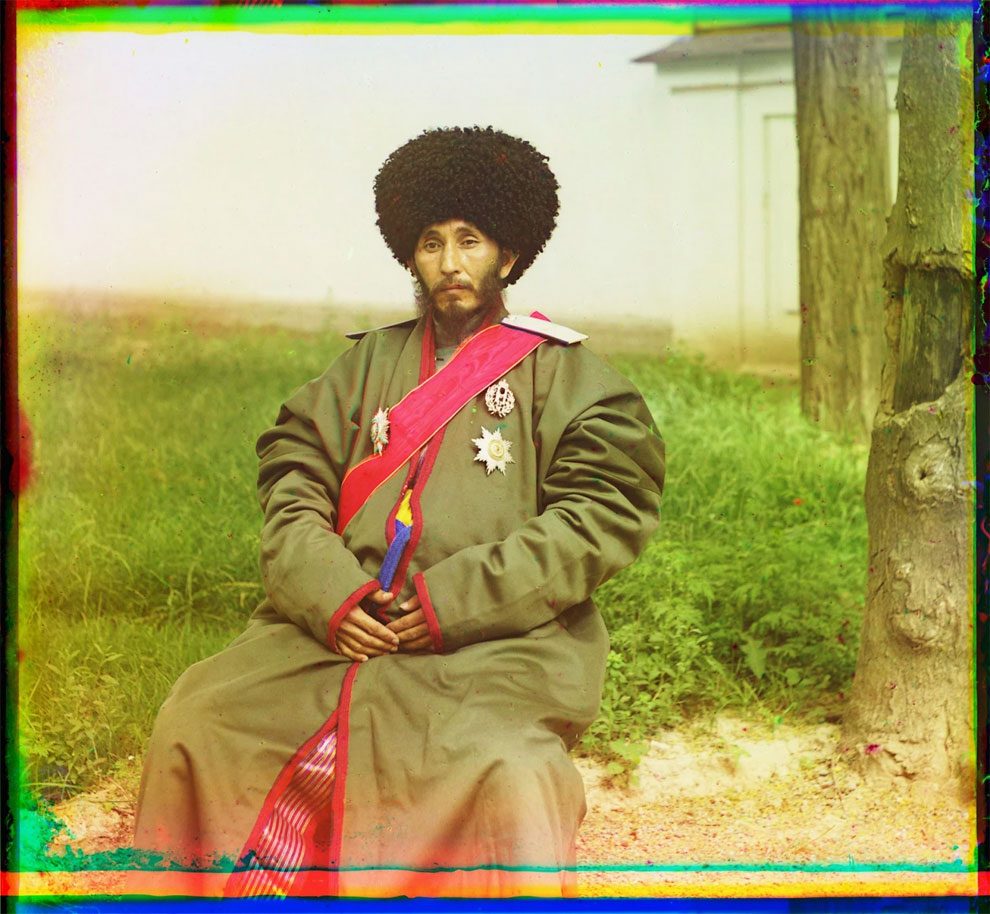