Bar Owner Removes $3,714 Worth Of Bills Stapled To The Walls To Pay Unemployed Staff

Probably most of us know at least one bar that has gone quite overboard with its unique decorations. Antique furniture, really weird vintage animal posters, family pictures all over the walls, coins glued to the bar⁠—you name it. Well, it turns out some of them might actually be useful in these grim times during the coronavirus pandemic. Especially the latter.

Over a span of three days, a Tybee Island bar removed $3,714 worth of bills stapled to their walls to give to their unemployed staff. 📸Jennifer Knox of The Sand Bar pic.twitter.com/Aiz2NBCPxy

The Sand Bar in Tybee Island, Georgia used to have quite similar decorations. Except they had dollar bills up on their walls rather than coins glued to their bar. But the dollar bills are up on the walls no more since the owners decided to put them to greater use and take them down in order to pay their staff. 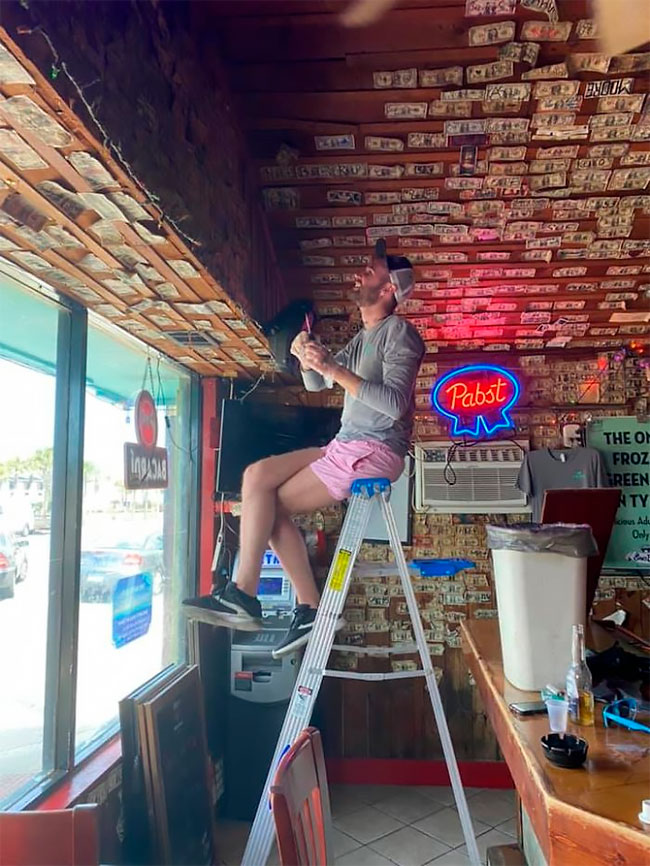 While interesting and tasteful decorations may often contribute to the success of a bar or a restaurant, this time, it may also contribute to this one’s survival during the coronavirus lockdown. The Sand Bar in Tybee Island, Georgia was known for its one-of-a-kind decorations. Its walls were covered in bills with tiny little notes from its customers. 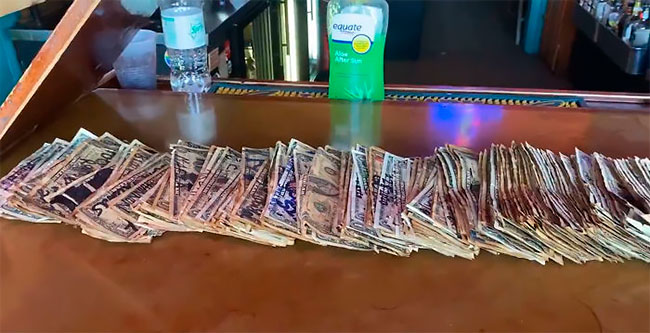 Turns out, the custom of writing a note on a bill and stapling it to the wall was an ongoing tradition for over 15 years. But the recent lockdown forced bar owner Jennifer Knox to take the bills down and put them to greater use. Since the state lawmakers issued a stay-at-home-directive in an attempt to slow down the spread of the novel coronavirus, The Sand Bar, among many other non-essential services, closed its doors, leaving the staff underpaid until the lockdown is lifted. 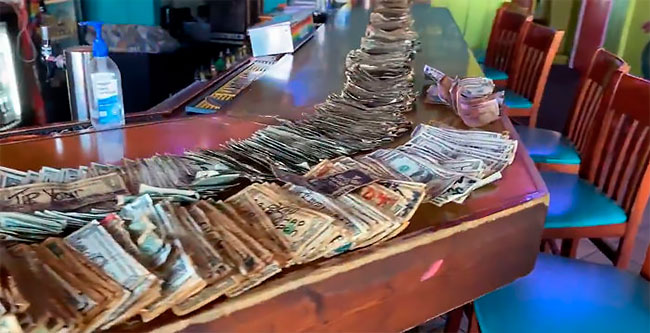 While this put Jennifer into an uncomfortable position, she didn’t give up and tried thinking out of the box. She took a good look at her bar and decided to remove its signature decorations in order to pay her staff. “We were sitting there, doors locked, and I’m like ‘oh my gosh, there’s money on the walls and we have time on our hands. We gotta get this money down,’” she said. 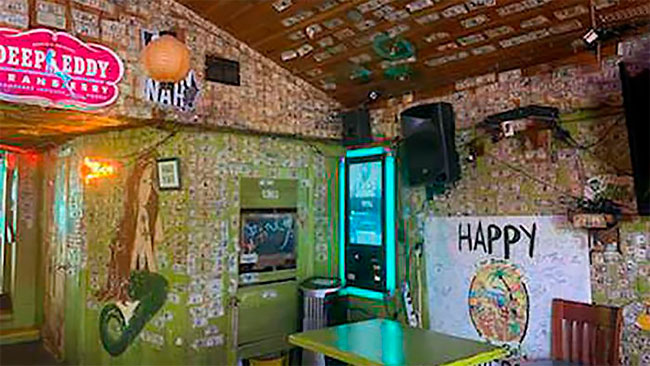 After the notes were taken down, they were thoroughly cleaned and counted carefully. This whole process took about a week and a half, but was well worth it, since Knox was able to collect $3,714 from all the bills stapled to the walls and ceiling. When their regulars heard about Jennifer’s efforts to pay her staff, they wanted to contribute as well and donated to the cause, raising the sum to $4,104. Four bartenders and two musicians were given $600 each. 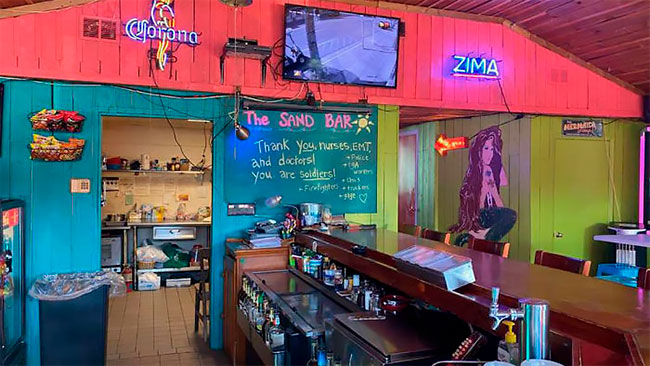 “I can’t just sit here and do nothing. I’ll do what I can for my people… We all look out for each other. We are all in this together,” she said. She also added that there’s a way to donate to the Tybee Island service industry via Venmo. Her credentials are @Jennifer-Knox-61.

This is What Happens When Donald Trump is Cast as The Princess in Classic Disney Films
“Selfish Pigs” Cartoons Show Annoying Things People Do
"Strength": Street Artist Painted 3 Murals On A Local Hospital As A Tribute To Spain's Health Workers
An Artist Combines Everyday Objects With Images From His iPhone
GIF Of Thrones: An Artist Creates A Weekly GIF That Corresponds To Each Episode Of 'Game Of Thrones' Season 6
"These Things Take Time": The Online Sanctuary of Loïc Sattler
Meet Dave: He Has Been Drawing Dad Jokes And Puns On His Daughters’ Lunch Bags For 8 Years
Hilarious Comics That Perfectly Sum Up Your Life As An Adult
This Artist Updates Classic Dr. Seuss Book Covers And They’re Great
Narrative Dramas Unfold In Robert Proch’s Multi-Dimensional Glitched Paintings And Murals
"Focus on Yourself": Modern Design and Post-Typography by Archives.Matei
Stunning 3D Artworks By Toni Bratincevic
This Guy Turns His Fried Eggs Into Works Of Art
Where’s Waldo? Thanks, Obama!
Artist Celebrates Japanese Art And Culture With Strong And Beautiful Women Illustrations
Portrait of Steve Jobs Made With Apples
Pet Foolery's "Pixie And Brutus" Comics To Brighten Up Your Day
Where Have All Your Dreams Gone: Magical Photography By Joel Robison
Athletic Clothing Company Has Launched A Controversial Ad Campaign Shows Marine Vet With Hogtied ‘Trump’
Incredible Typography Works of Jordan Metcalf
Russian Artist Draw Interesting Pupils Of The Eyes, Here Are 11 Of Them
"The Last Man on Earth": Melancholy Aesthetics in Chilling Photoworks by Jermaine Saunders
Fake Science 101: A Less-Than-Factual Guide To Our Amazing World
Someone Just Took Vines Out Of The Phone And Put Them On The Streets Of Manhattan
bar, bills, quarantine, unemployed

This Artist Painted Famous Characters Into Old Thrift Store Paintings And Raised Their Value
Naughty Devil Girls Illustrated by Mirka Andolfo
This Guy Used AI To Colorize Hollywood Stars Of The Golden Age And Here's What He Got In Only A Few Seconds
This Woman Creates A Gender And Race-Neutral Deck Of Cards, Can’t Keep Up With The Orders
Father Draws Cartoon Childhood For His Daughter
Classical Paintings Recreated With Wine
Eye-Catching Minimalist Street Art Made Using Masking Tape
The ABCs of College
Adidas Originals: Lakeside Stories
British Street Artist Mobstr Has An Awesome Collection Of Sarcastic Art Pieces Aprawled Across The UK
2007 ‒ 2023 by Design You Trust. Proudly hosted by WebHostingBuzz.
Privacy Policy · Terms of Service · Content Removal Policy ❤️ 🇺🇦