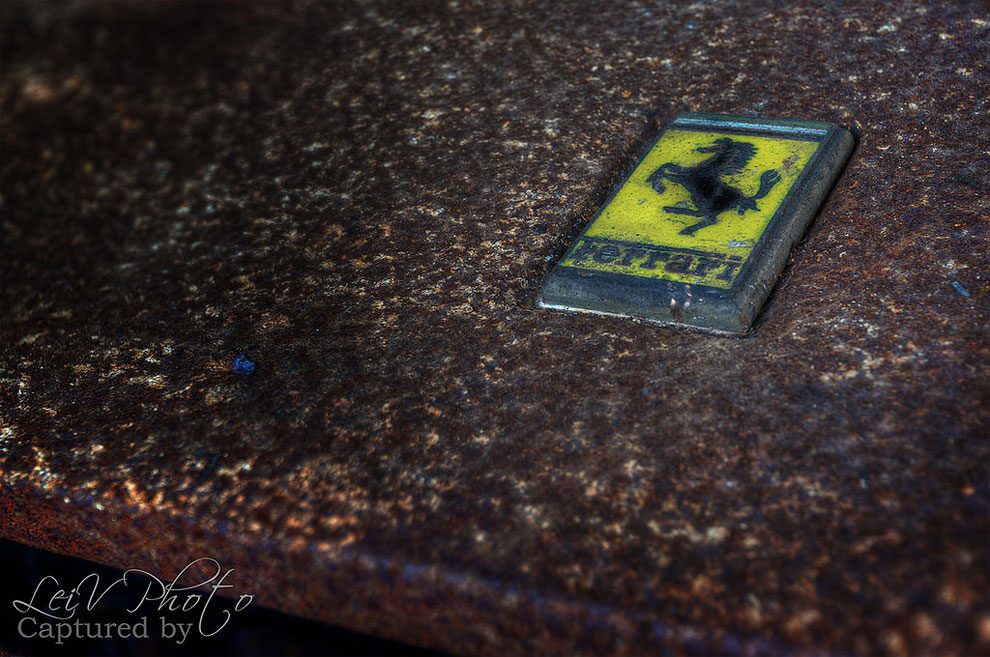 Belgium-based urban exploration photographer LeiV Photo captured these interesting – perhaps even tear-jerking – scenes of classic cars slowly rusting away into oblivion in a barn or garage at an undisclosed location. Among them are an abandoned Ferrari and an old MG. 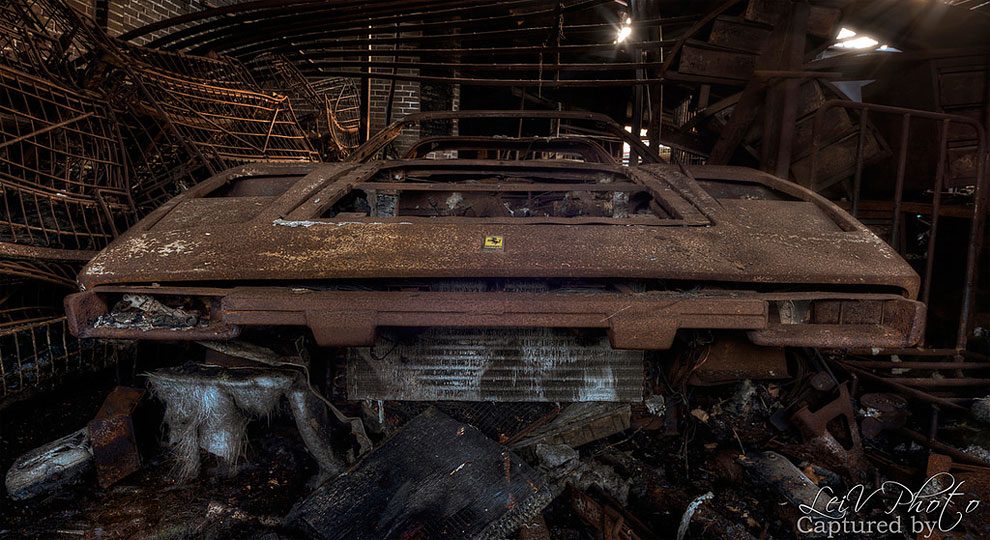 The Ferrari appears to be little more than an empty stripped-out shell, doubtless offering little beyond a logbook should a restoration (or rebuild) effort ever be mounted. Its distinctive form, and iconic prancing horse emblem, serve as decayed reminders that this was once someone’s pride and joy. Moreover, the photographs suggest that it may have been the victim of a fire. 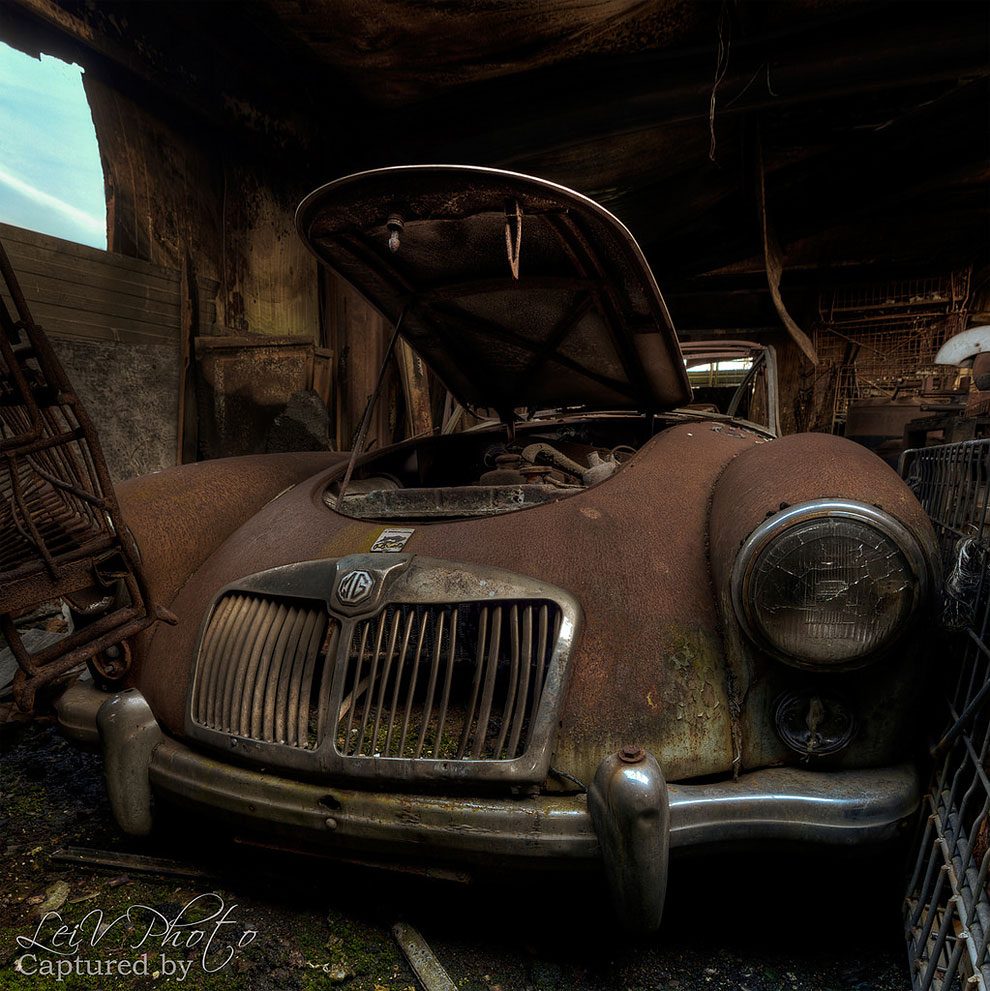 The MG, on the other hand, appears to be more intact, though no less rusted through following years of idleness. The engine is fitted and the classic MG badge still graces its elegant front. Photographed in HDR, the textures of rust and decay add extra layers to the subjects which almost offset their sad condition. 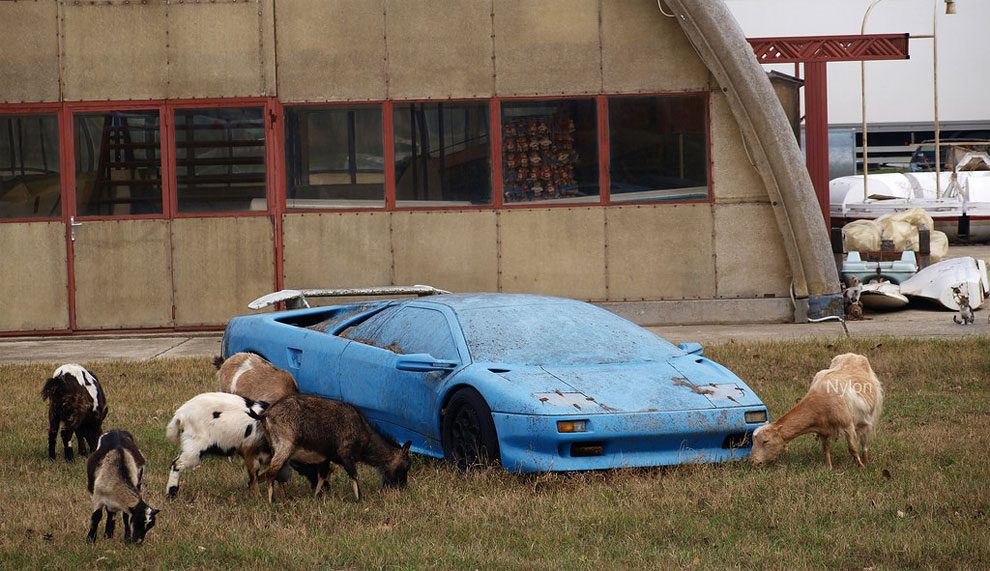 It’s made the rounds of the automotive and motorsport publications and websites. But like other abandoned supercars that have turned up online and spread like wildfire across the blogosphere, the circumstances behind its apparent dumping are hazy. Aside from our understanding that the photograph was taken in October 2011, we know very little about what appears to be an abandoned Lamborghini Diablo, parked in a field and surrounded by grazing goats.

Flickr user Nylon – who photographed the abandoned Lamborghini and added the tagline “Lamborghini Diablo Goat Edition” – hasn’t disclosed the unfortunate vehicle’s location, but comments on the page have questioned whether the abandoned supercar could actually be a replica.

Firebird III: One Of The Most Intriguing And Influential Concept Cars Of General Motors
Amazing Vintage Photographs Of The TC-497 Overland Train Mark II, The Longest Offroad Vehicle In The World
ROME “3 Dreams of Black”
Energy-Saving Lighting System Turns Night Sky Purple in Sweden
Futuristic and Retro, Hyundai Transforms First-Generation 1975 Pony with Electric Powertrain
1939 Pontiac Plexiglas "Ghost Car": The First Full-Sized "See-Thru" Car Ever Made In America
Chinese Company Set Up A Simulation Of Mars In The Gobi Desert
The World's Largest Cruise Ships: A Look Inside
Diathermy in Beauty Culture From From the 1930s
A Mobile Phone is Shown at a Luxury Goods Department Store in Hong Kong
Photos That Prove The Station Wagon Was Actually The Best Family Car Ever
Coolest Designed Products Of 2016
Japanese Engineer's Giant Robot Dream
This Awesome Vending Machine Offers Short Stories And Poems Instead Of Snacks
Soviet-Era Tesla Tower: Mysterious Object In Moscow Suburbs
Dutch Engineering Student Created Incredible Exoskeletal Mechanical Dinosaur Costume
1960 Ford Spaceliner, a Vehicle That Looks a Bit Like a Spaceship From a Science-Fiction Movie
Innovative Bike Doubles As Washing Machine To Clean Your Clothes As You Exercise
The Real Star Wars Weapon!
Amazing Photos Of 1949 Delahaye 175 S Saoutchik Roadster, Which Was Owned By English Blonde Bombshell Diana Dors
Fantastic Minimalist Japanese Cruiser 1989 Nissan Neo-X Concept That Was Ahead Of Its Time
Innovative Virtual Shop
Top Car Debuts at the Los Angeles Auto Show 2011
The Russians Make The Best Truck In The Universe For $50K
NASA's Concept of the Gravity Recovery and Interior Laboratory
The 1949, The Kurtis Sport Car, One Of 16 Produced
The Model of James Webb Space Telescope
Australian Farmer Fights Erosion With A Patchwork Of Geometric Designs
The Lost Corvettes: 36 Chevrolet Corvettes From NYC Barn Find To Be Raffled In Charity Sweepstakes
Underclothes That Display The 4th Amendment When X-Rayed By TSA
abandoned, exploration, ferrari, photographer, reveals, urban