A selection of work by four photojournalists who have won grants of $10,000 and editorial support from the agency 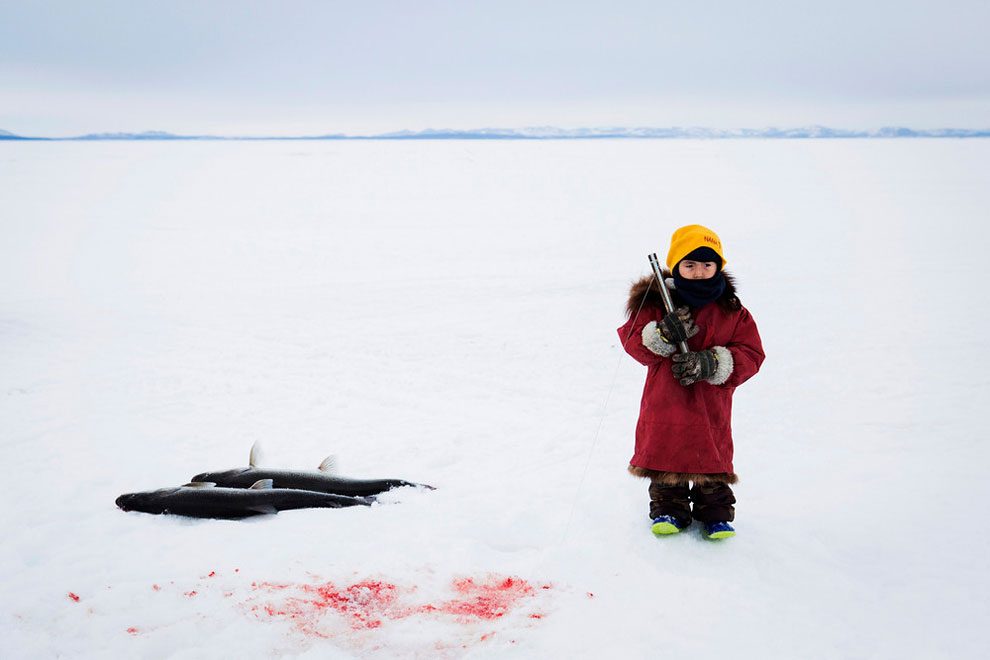 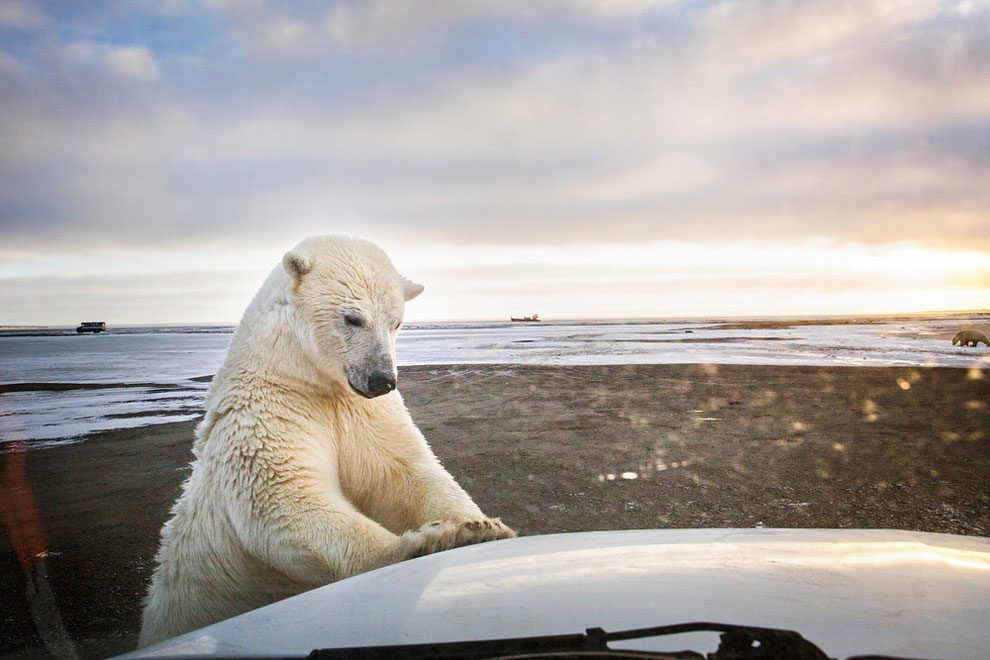 In late summer and early autumn polar bears flock to the native village of Kaktovik in the Alaskan Arctic to eat at “the boneyard” – the remains of whales annually hunted by the community. (Photo by Katie Orlinsky/Getty Images) 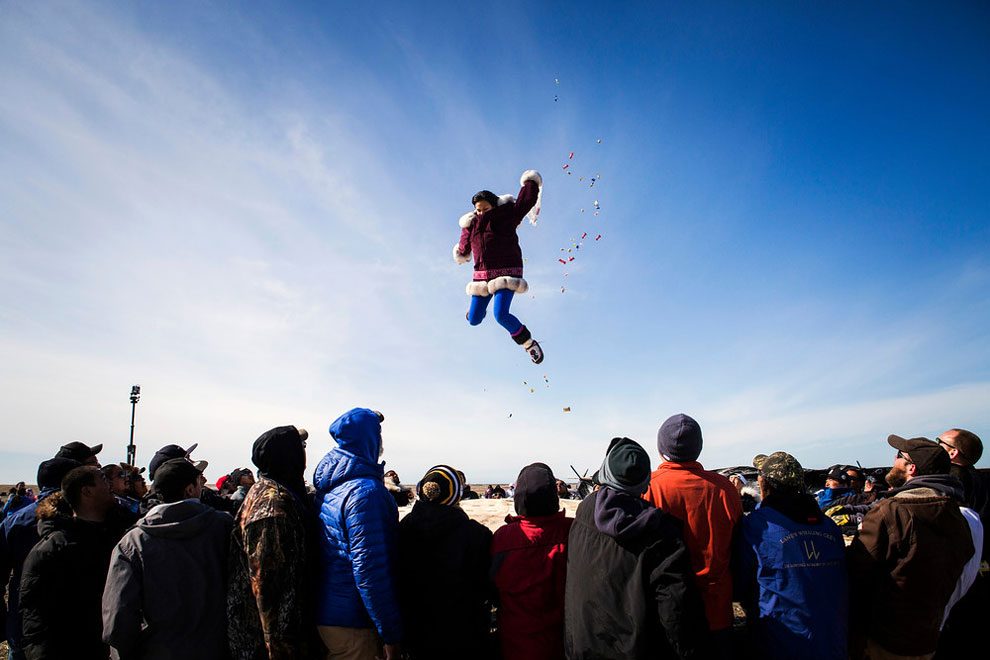 The traditional blanket toss at the annual whaling feast in Point Hope. For the Iñupiat villagers nothing is more important than the bowhead whale. The calendar year revolves around hunting, fishing and gathering. (Photo by Katie Orlinsky/Getty Images) 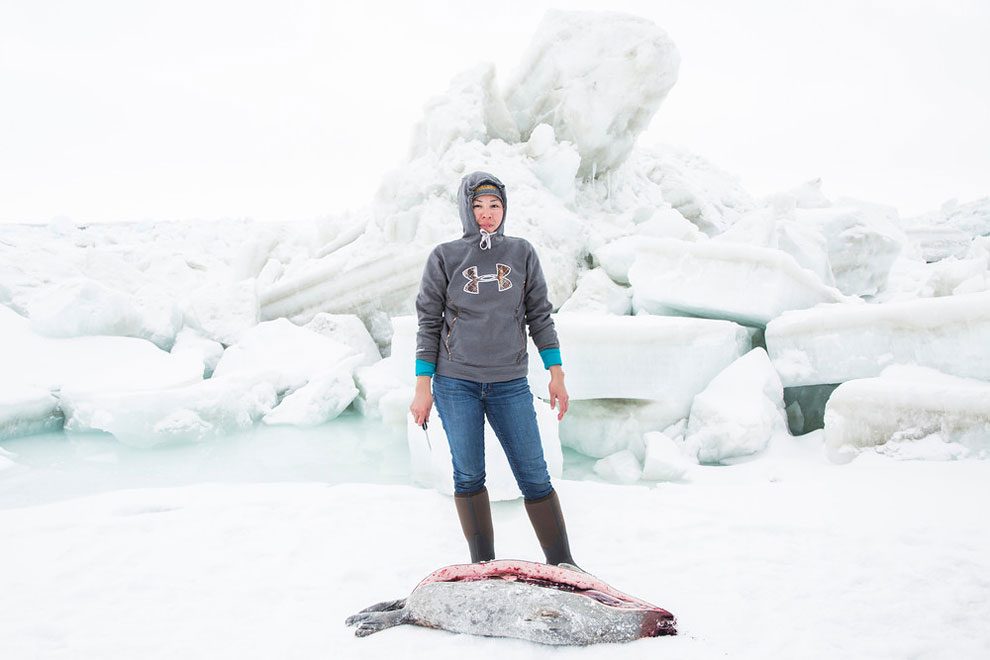 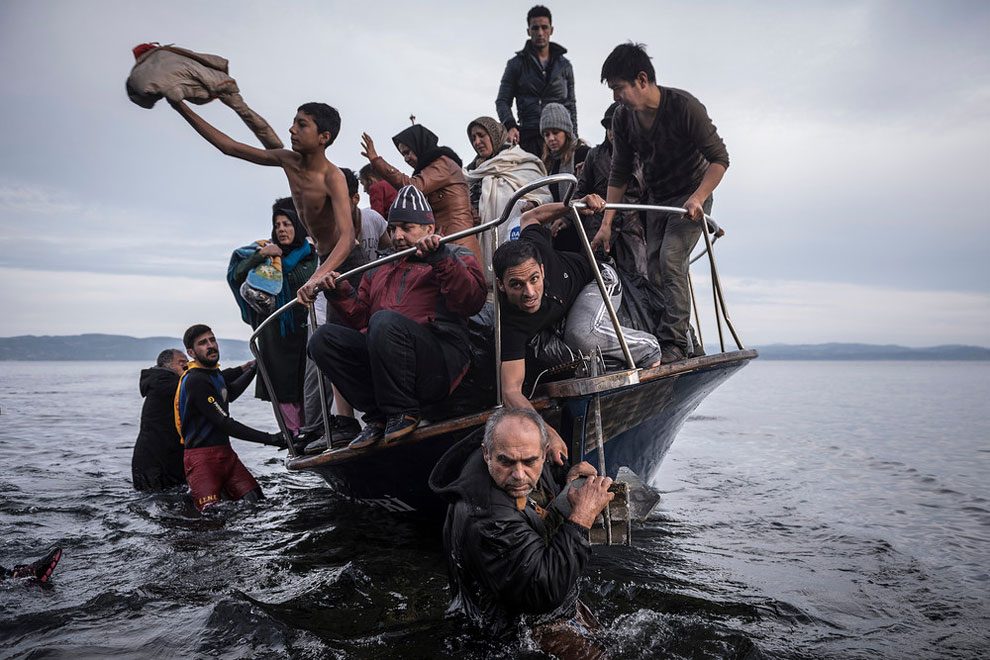 “Exodus” by Sergey Ponomarev. This project explores the life of migrants and refugees of the Middle East and Africa. People arrive on the island of Lesbos by Turkish boat. The owner of the boat delivered 150 people to the Greek coast and was later arrested. (Photo by Sergey Ponomarev/Getty Images) 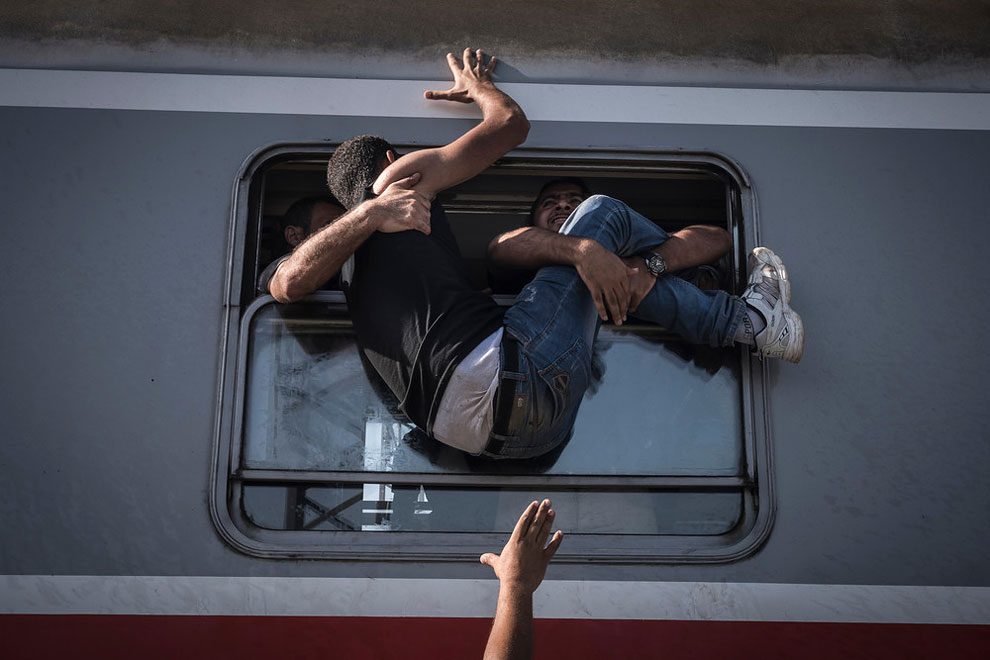 Refugees attempt to board a train towards Zagreb at Tovarnik station on the border with Serbia. (Photo by Sergey Ponomarev/Getty Images) 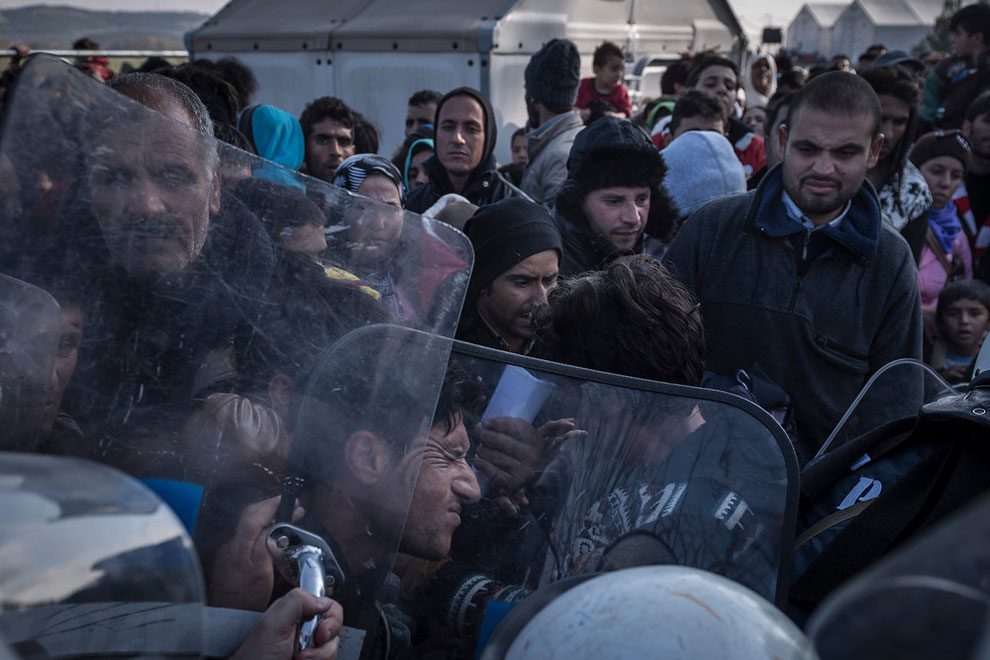 Migrants are pushed back after crowding over police cordons to enter Macedonia at the Greek-Macedonian border. Thousands of migrants were stranded on the Greek side after Macedonia blocked access to citizens of countries that were not being fast-tracked for asylum in the European Union. Macedonia now allows only citizens from Syria, Iraq and Afghanistan. (Photo by Sergey Ponomarev/Getty Images) 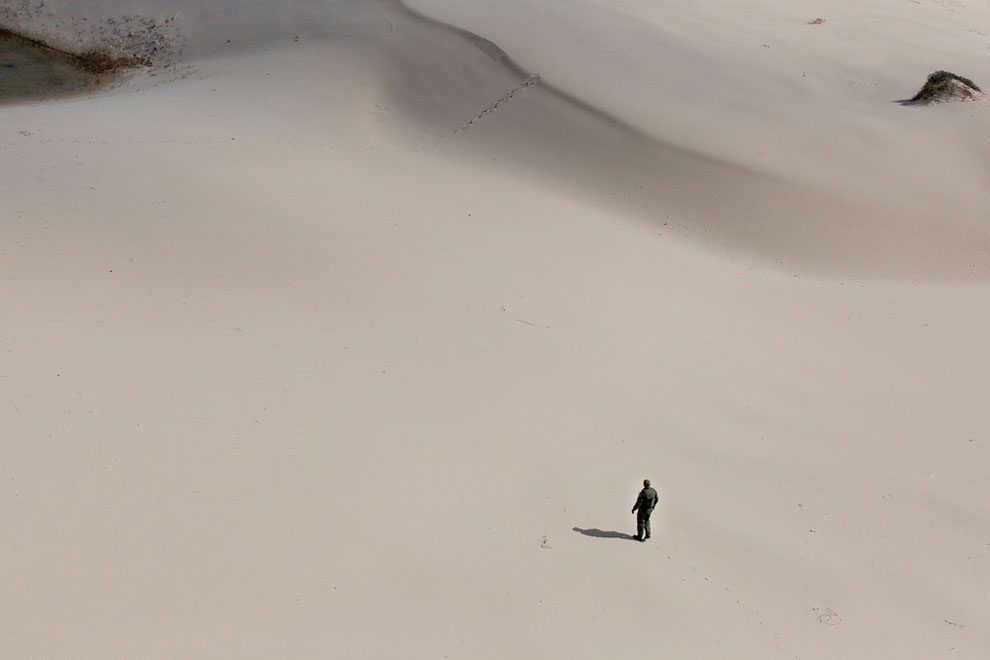 “Border Security” by Kirsten Luce. Luce wins the David Laidler Memorial Award for her project. Captured at the southernmost point of Texas it examines the busiest corridor for human and drug trafficking in the US. A border patrol agent searches for migrants hiding in sand dunes in Kenedy County, Texas. The migrants were hiking to avoid the interior checkpoint in Sarita. This second “border” is where the majority of migrant deaths occur due to heatstroke, dehydration or exhaustion. (Photo by Kirsten Luce/Getty Images) A migrant surrenders to border patrol on the banks of the Rio Grande river. This man was waving to the helicopters and waiting to be picked up by border patrol. Self-presenting became common in 2014 with asylum seekers from Central America fleeing violence and poverty. (Photo by Kirsten Luce/Getty Images) 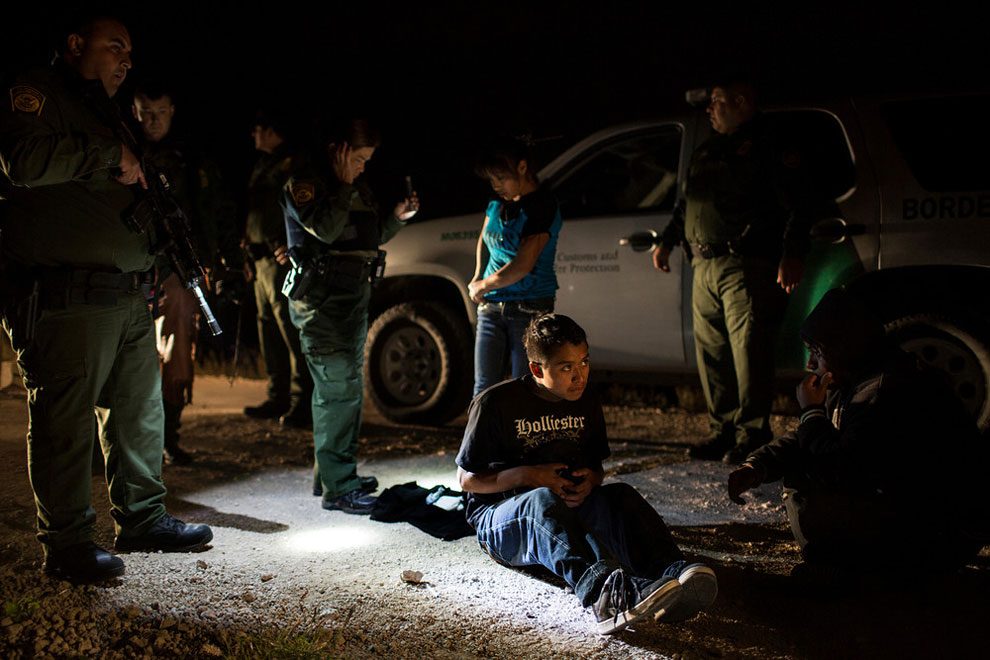 A man from Guatemala is apprehended by border patrol agents south of Granjeno, Texas. (Photo by Kirsten Luce/Getty Images) 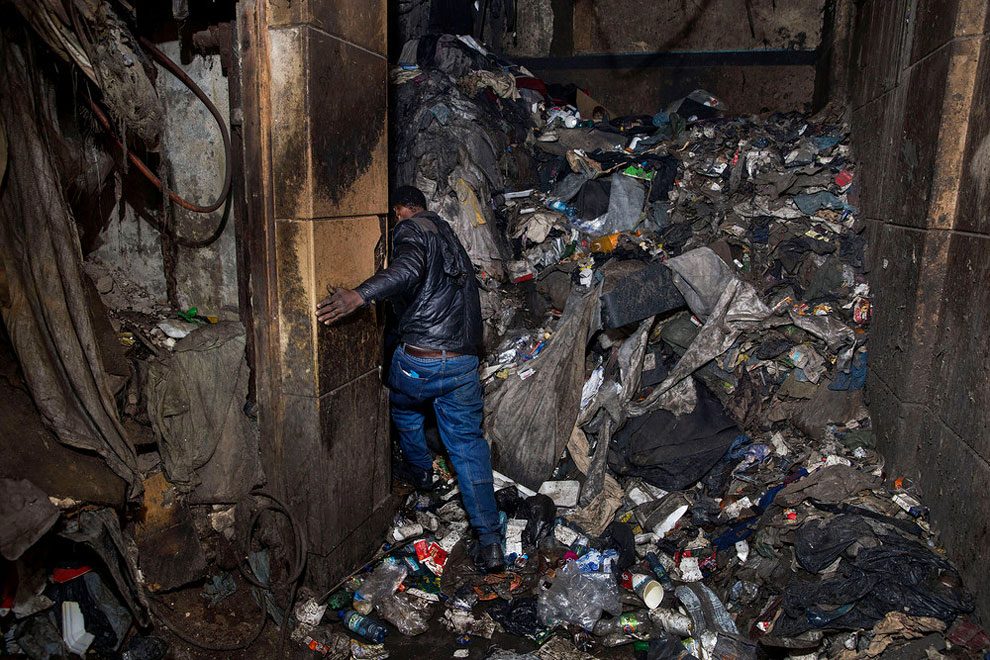 “Hijacked Life” by Jonathan Torgovnik. This project examines the complex issues faced by African migrants upon arrival in South Africa. This is the main and only entrance to one of the derelict “hijacked” buildings that houses African migrants, in Johannesburg’s inner city. Piles of rubbish have accumulated for years, almost completely blocking the entrance. The neglected building has suffered several fires, and does not have running water or electricity. (Photo by Jonathan Torgovnik/Getty Images) 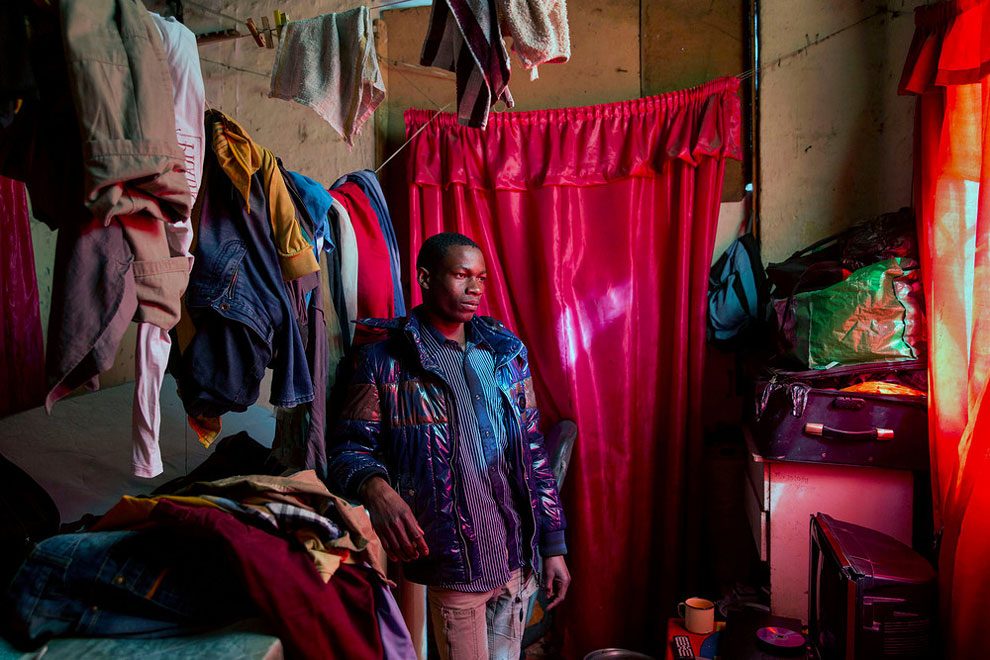 Edward, a 20-year-old carpenter from Malawi, in the small room he shares with four other migrants in one of the derelict “hijacked” buildings. He makes $24 per week, which is just enough for his living and transport expenses. (Photo by Jonathan Torgovnik/Getty Images) 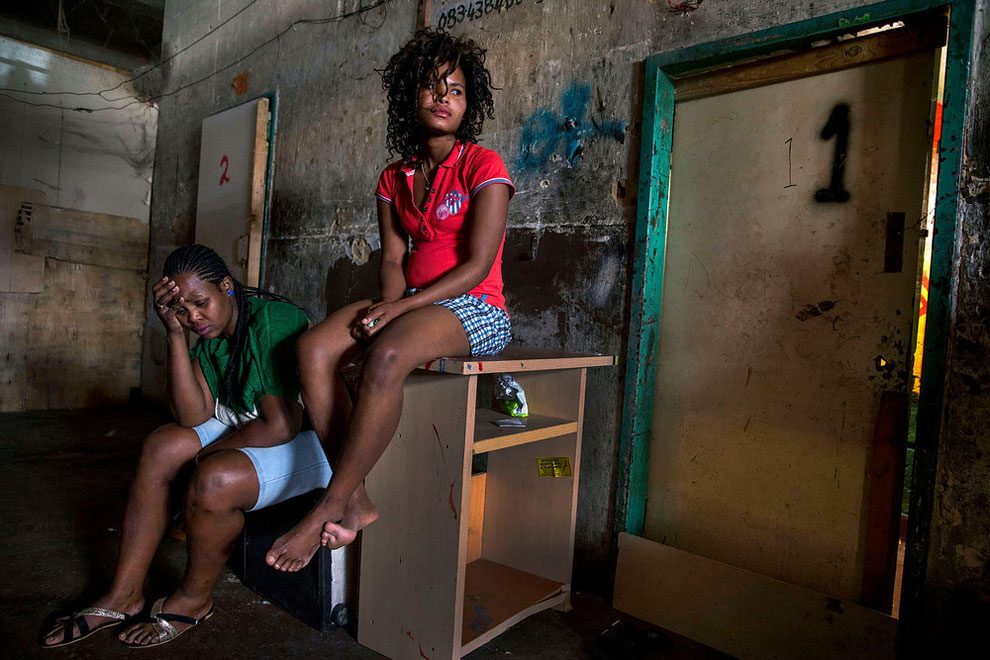 Women at the entrance to one of the derelict buildings. (Photo by Jonathan Torgovnik/Getty Images) 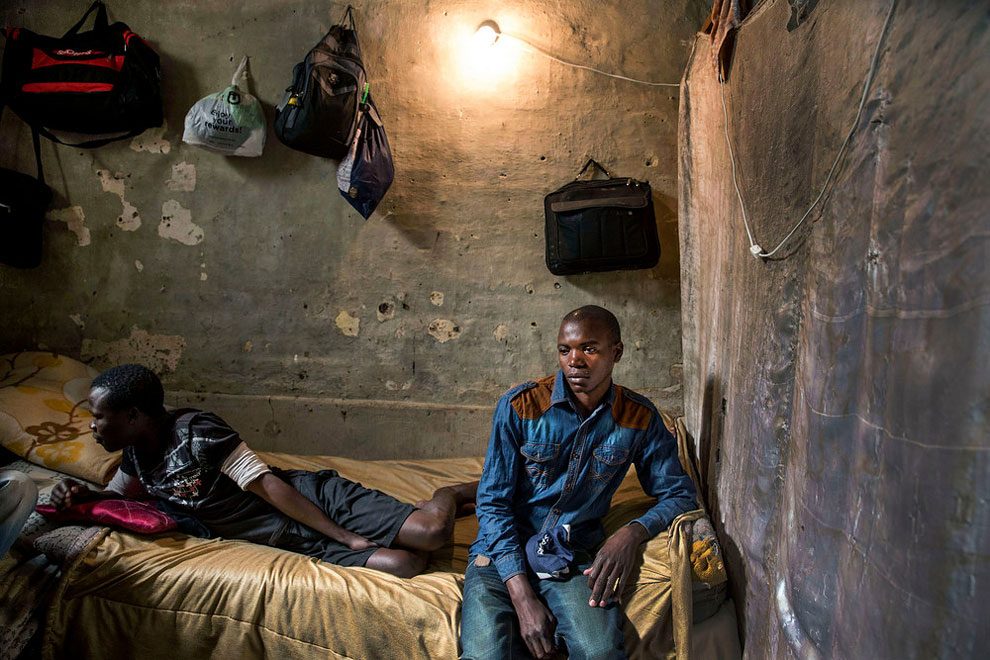 Adam, 25, from Zambia, in the small windowless room he shares with four other migrant workers. (Photo by Jonathan Torgovnik/Getty Images)

10 Photos Of Carrie Fisher Promoting "Return Of The Jedi" At A Rolling Stone Magazine Beach Shoot, 1983
Proxy: A Collection of Distorted Abstract Portraits by Seb JJ Peters
There’s A Trend Of Photoshopping Celeb Pics To Meet ‘Modern Beauty Standards’ And Some Say It’s Messed Up
Haunting Photos Of Moscow’s Young Ravers And Their Lives After Dark
Artist “Completes” Clouds By Adding Silhouetted Shapes To Them, And The Results Are Beautiful
The Beauty Of Finnish Winter Swimming
The Best 16 Photos Of The Wildlife Photographer Of The Year 2021
This Is What Happens When Barbie Faces The Struggles Of Living In NYC
The Meditative Beauty Of Nighttime In Dreamy Photographs By Neil Kryszak
Bring The Beat Back: Youth Culture And Energy Of The 80s New York
Lamborghini: Photography and Art Project by Vimal Chandran
Born In The USSR: 50 Amazing Photos Of Russian Girls From The 1990s
Daredevil Photographer Pushes The Limit Riding Nantucket's Frozen Slurpee Waves
Let The Children Play: Remarkable Photos Of Lovely Kids By Svetlana Kvashina
The Miracle of Birth
Steve Russell's 2011 Favourites
Vibrant And Moody Urban Photos Of Vancouver By Mado El Khouly
15 Wonderfully Satisfying Photographs to Put Your Tired Mind to Rest
Surreal Family Vacation Photos That Include The Cats
Natalia Vodianova for Jalouse, July-August 2012
Beautiful Winning Photos From The 2020 Head On Portrait Award
Australian Life Prize 2015
Vintage, Rare, Candid, Funny, Beautiful, Weird And Awesome Celebrity Photos
Photographer Visits Famous Movie Scene Locations In Real Life
getty, grants, images, photojournalism