Winning Photos Of Astronomy Photographer Of The Year 2021

The winner of Astronomy Photographer of the Year 13 has been revealed. The remarkable winning images were revealed in a virtual awards ceremony on Thursday 16 September 2021.

The Royal Observatory Greenwich has announced the winners of its 13th annual astronomy photographer of the year competition, with the £10,000 (about $13,793) top prize awarded for a beautiful photo of a solar eclipse titled “The Golden Ring.” 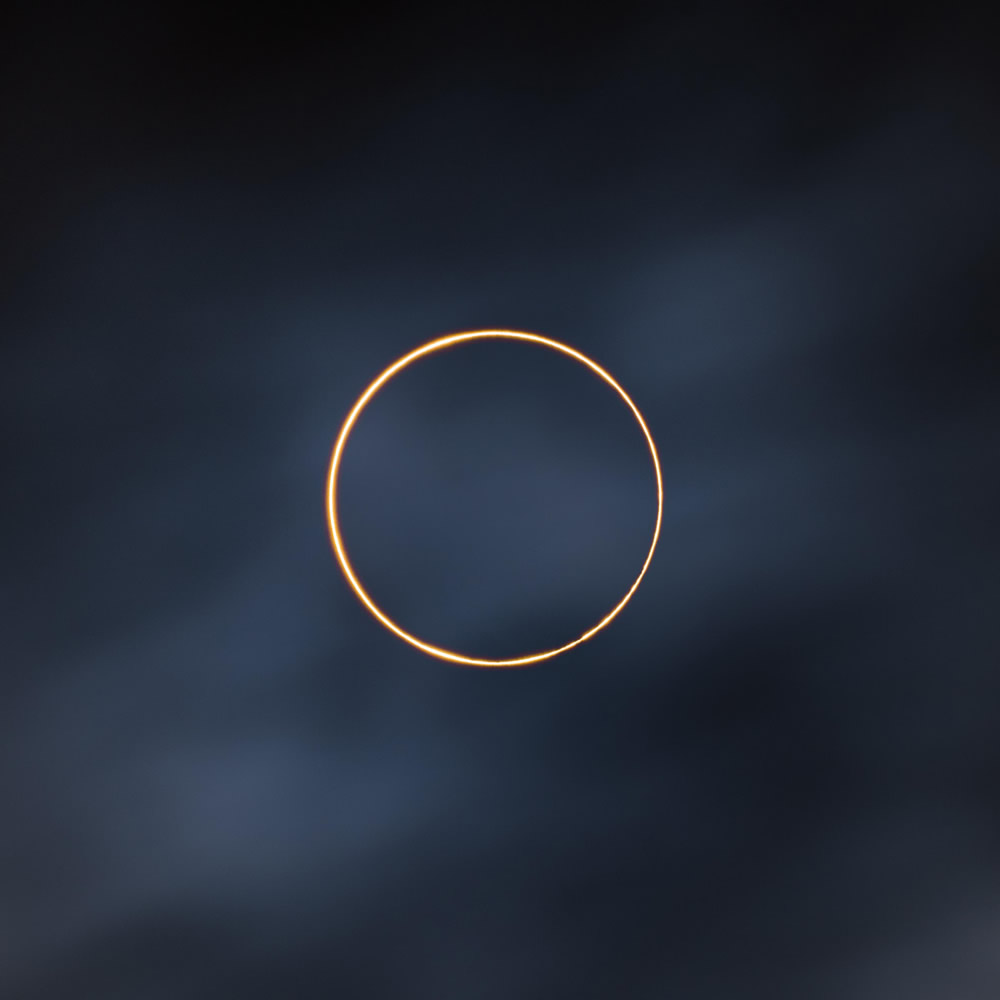 Shuchang Dong has been crowned the overall winner of Astronomy Photographer of the Year for this mesmerising photograph The Golden Ring. The image shows an annular solar eclipse taken in the Ali region of Tibet on 21 June 2020.

“This place has year-round sunny weather, but in front of the annular eclipse, I saw dark clouds all over the sky,” recalls photographer Shuchang Dong.

“We were waiting with anxious minds but we were lucky. Within a minute of the annular eclipse, the sunshine penetrated through the clouds and afterwards the Sun was sucked into the thick clouds. We were so lucky here!”

The judges praised the image for combining the science, art and technological ingenuity of astronomy photography.

“Our Sun can still be seen as a ring circling the Moon as it passes in front of the Sun, and mountains on the lunar surface can be seen hiding some of this light on the lower righthand portion of the image,” points out judge Emily Drabek-Maunder.

Fellow judge Steve Marsh calls it “moody, serene, perfectly captured and expertly processed. You feel as if you could reach into the sky and place this onto your finger.” 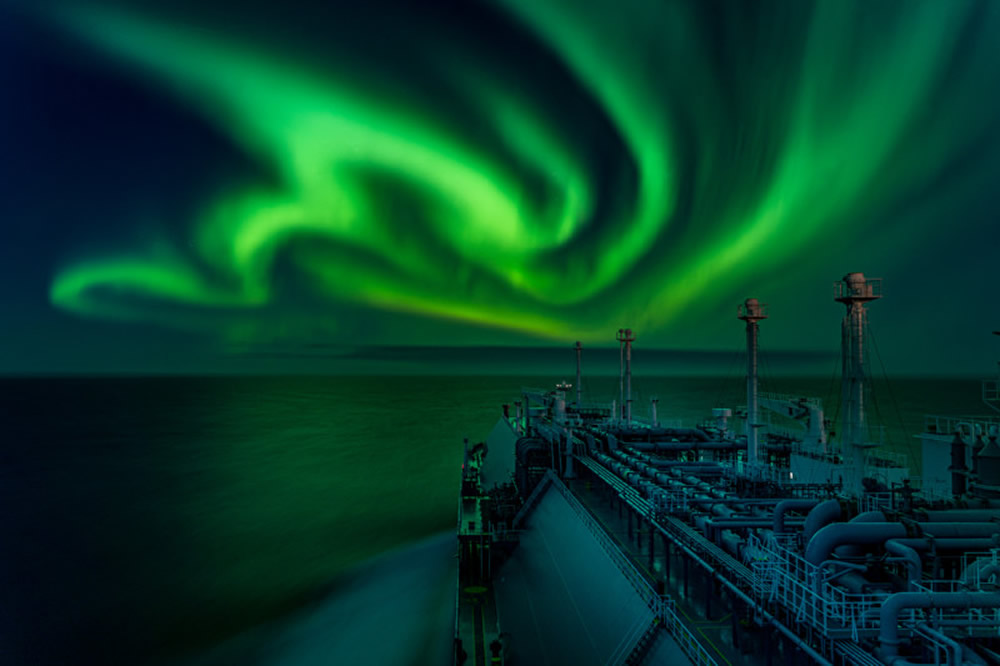 “I’m intrigued by this image. It is both beautiful but extremely unsettling. The juxtaposition of the vividness of the green with the inky blue of the ship is so dense, almost like velvet. However the lack of any sign of human life on this steadily moving vessel feels like the opening scene of a science fiction film.” 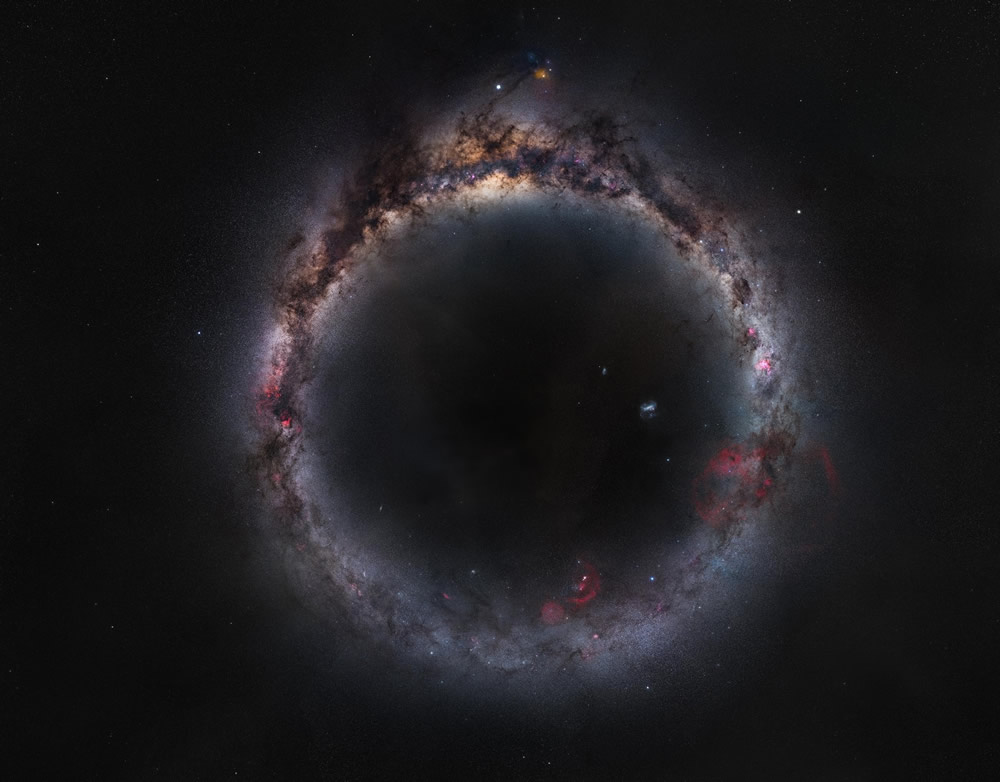 “This cosmic circle is one of the most breathtaking entries we saw this year. The balance of colours, from the glowing upper half of the ring, to the darker, moodier bottom half, seems to encompass a whole range of majesty and beauty. The dedication of the photographer, who took almost two years to piece this picture together, must be applauded too.” 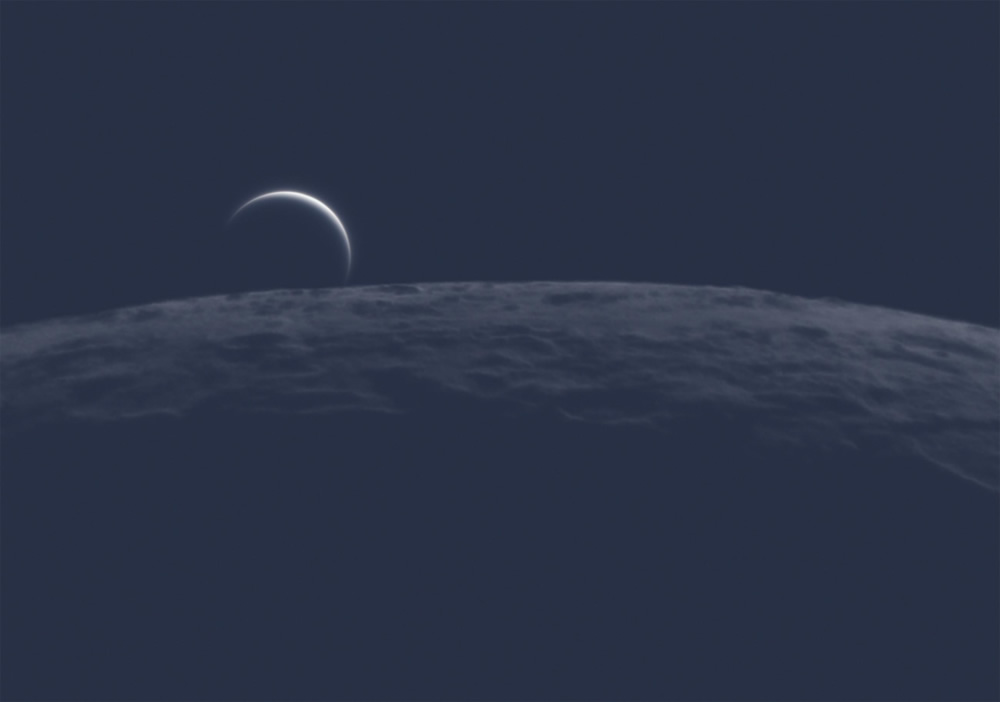 Beyond the Limb by Nicolas Lefaudeux (France)

“This is how the Solar System might look to a space traveller. Cosmic distance and celestial objects can be seen from a new perspective in one single image.” 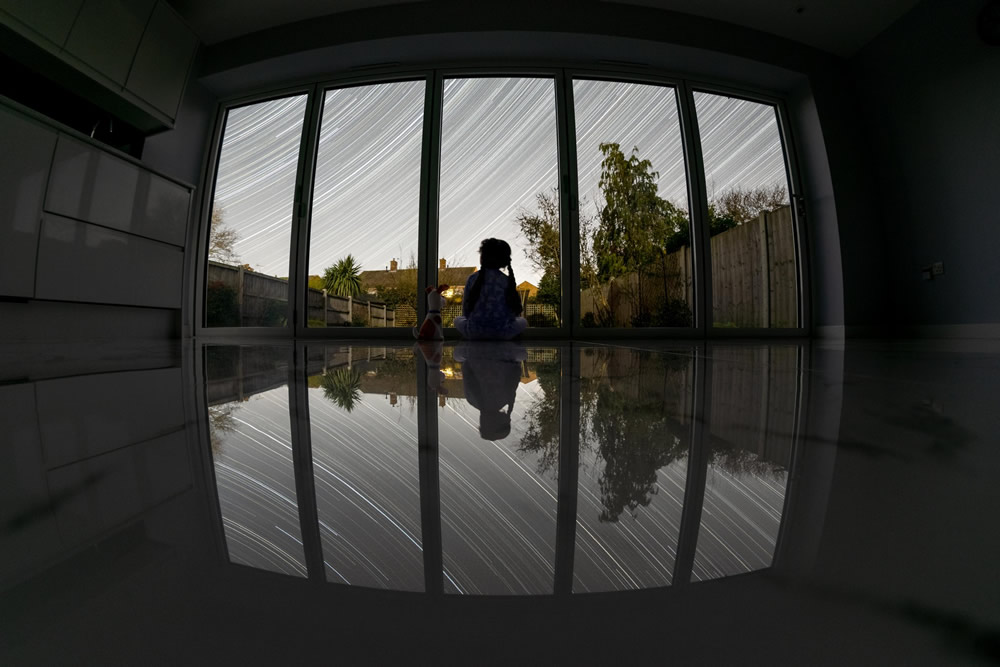 “This picture made me emotional because it is a beautiful snapshot of what we as humans collectively experienced during this pandemic – being confined within our four walls gazing thoughtfully out of our windows in hope. A beautifully moving image.” 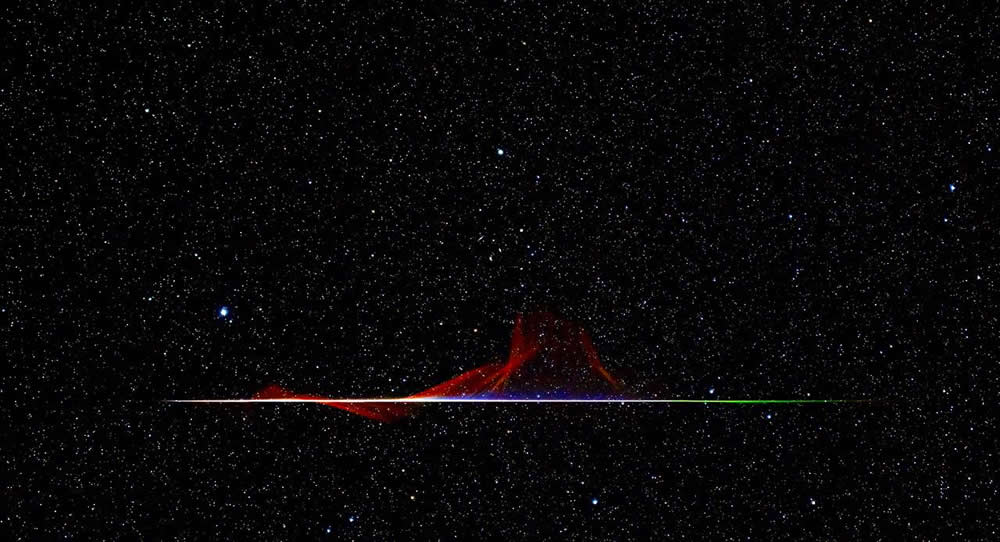 “A unique image of a colourful meteor. No doubt this is one of the luckiest captures out there, but at the same time there is an absolutely amazing and inspiring story behind the image. Hard work, some share of luck and great image processing.” 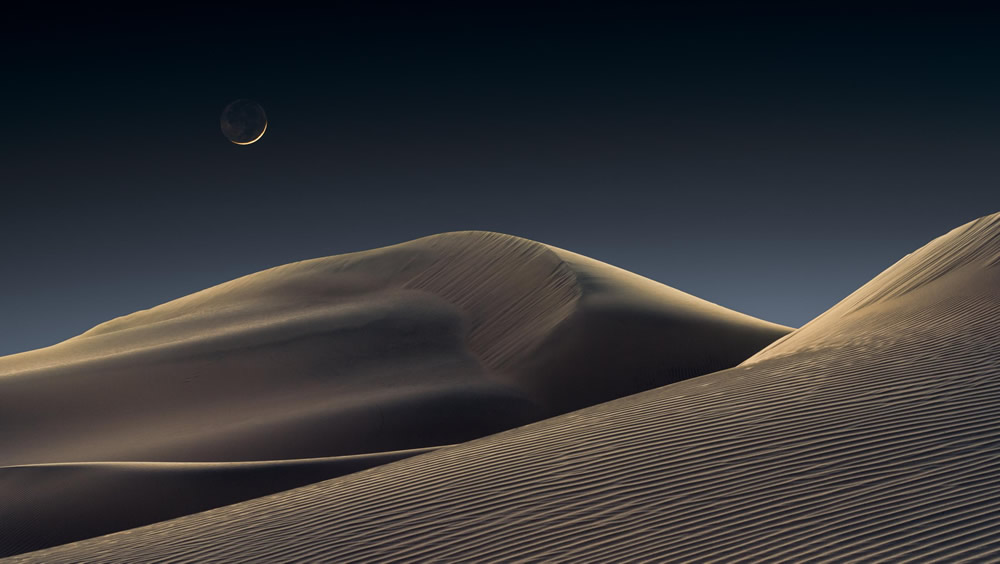 “This image was one of my favourites this year. It is beautifully composed with the subtle textures in the sand and sky complementing the crescent well. I loved the colours too – navy blue and gold – giving this picture a regal touch.” 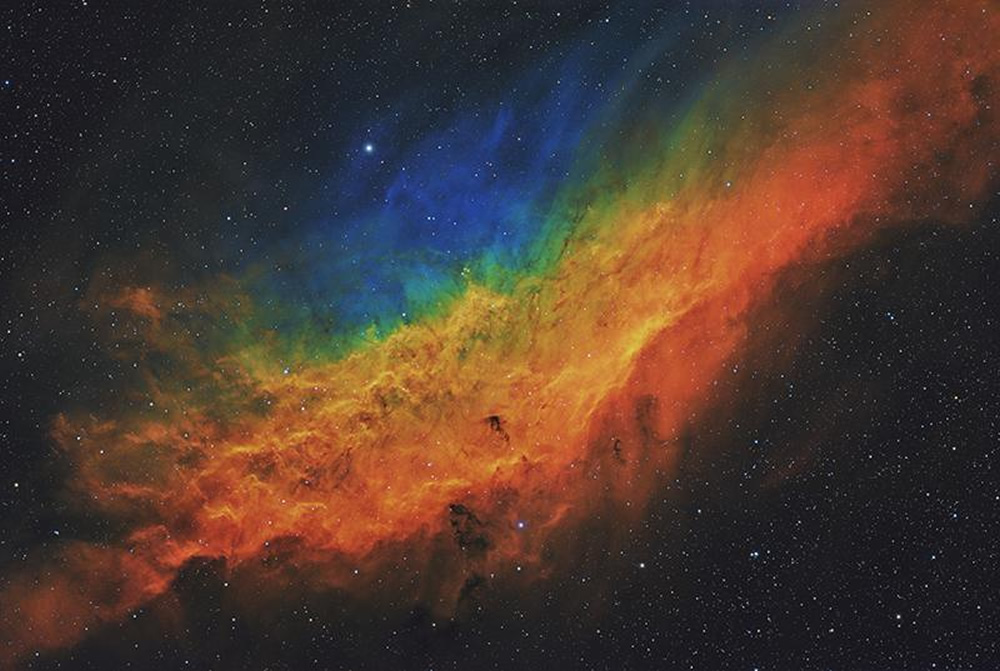 “The colour choices made in the capture and processing of this image are beautiful enough on their own, yet they are not just for show and reveal much more about the nebula itself. A brilliant idea with brilliant execution.”

“All families are unconventional, so I adored this fresh, gently playful concept around the Solar System. A meaningful, technically accomplished work from a rising star of astronomical photography.” 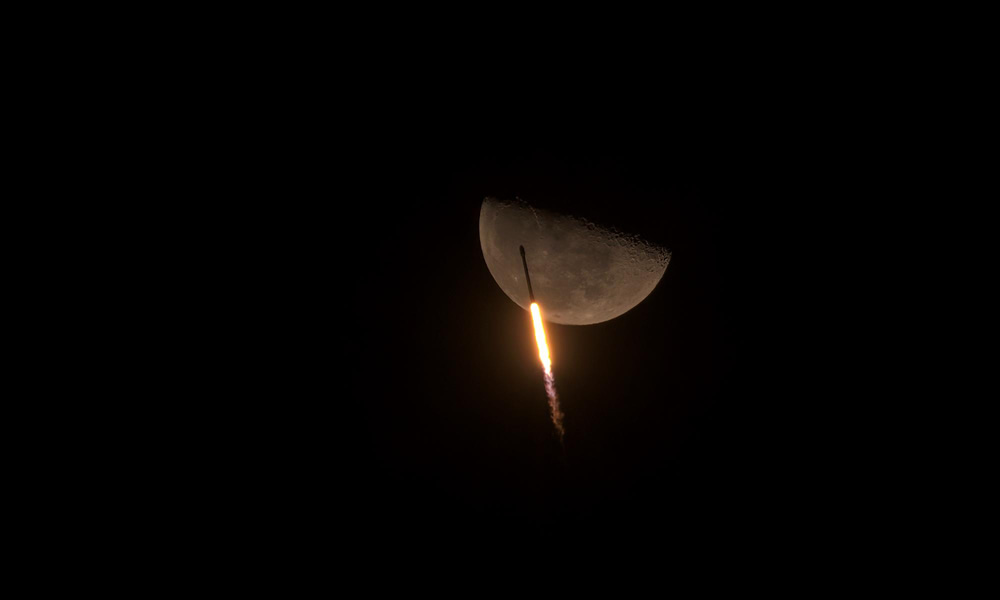 Falcon 9 soars past the Moon by Paul Eckhardt (USA)

“The right target, the right moment, the right composition. These three aspects make this image a special one among many astrophotos and many spacecraft transit lunar images. This image couldn’t be planned – it is a result of good situational awareness of a talented photographer.” 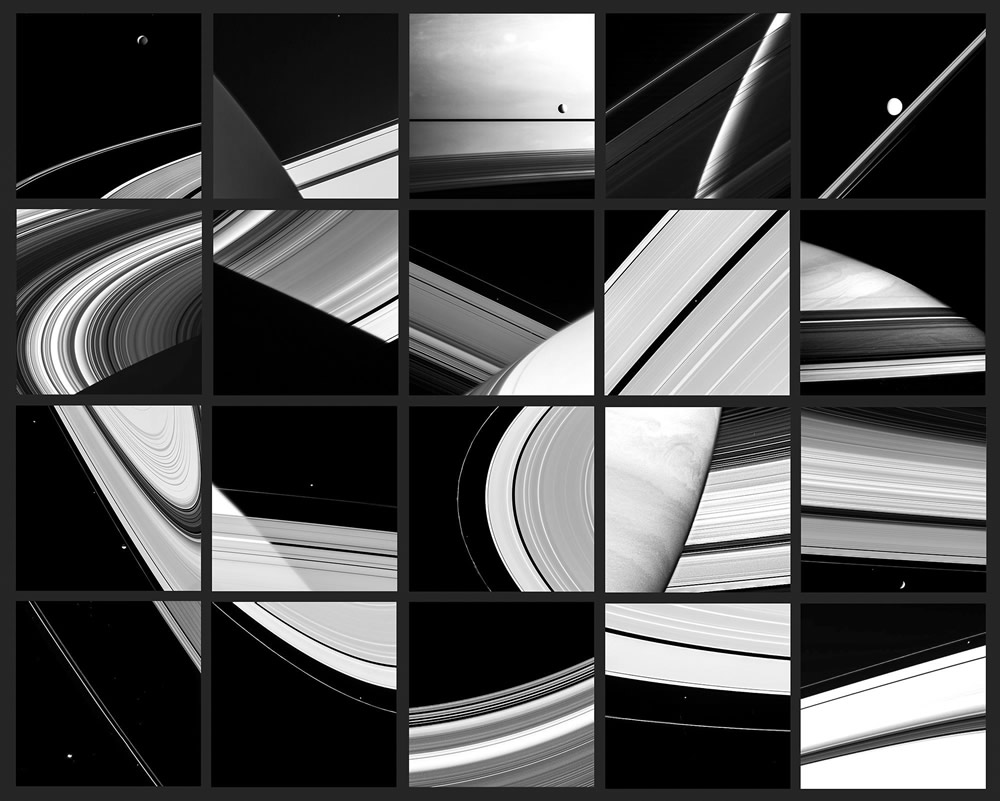 “The grace of Saturn and its magnificent rings still remains even when presented as an angular jigsaw shattered into smithereens. A striking piece of art which would look fantastic taking up the entire wall of a skyscraper lobby.”

Amazing Travel Photos From Around The World By Travis Bruke
What's Cooking, Uncle Sam?
Project DOCUMERICA: 1970's Skiing Resort Photos of Aspen, Colorado
"Nature Under Threat": The winning Images of The Cop26 Photographic Competition 2021
20 Award-Winning Photos Capture the Terror and Beauty of Giving Birth During the Pandemic
Stunning Time Slice Photography By Richard Silver
How Far From Home: Couple of Adventure Hunters Share Breathtaking Shots Of Unique Places
Vintage American Teen Girls' Hairstyles – Female Students Of The High Schools In California From The Late 1960s To Early 1970s
Landmannalaugar, a National Park of Iceland
Photographer Emily Lauren Wants To Change The Way We See Female Beauty
Grotesque, Occult, and Bizarre Images by William Mortensen, the Forgotten Hollywood Photographer
Amazing Winners Of The African Wildlife Foundation Photography Awards
Photographer Luc Kordas Captures The Iconic Coney Island During The Most Vibrant Time
Striking Photos Documented Life of African-Americans in Chicago's South Side in 1941
The Tattoo Erasers
2014 National Geographic Photo Contest, Week 5
Japan Cords
Fascinating Photos Of Neil, The Pet Lion Of Tippi Hedren And Melanie Griffith
Photographer Christoffer Relander Captures Colorful Landscapes In Jars
This Fascinating Photo Project Shows How Much Family Means To Every Single One Of Us
This Guy Took Engagement Photos With A Burrito
Stunning Artistic, Portrait and Surreal Photography by Man Ray in the 1920s and ’30s
Pictures Of Russian Meteorologist That Spent 30 Years In The Loneliest Place On Earth
A Fascinating Photo Project About The Reflection We Want To See In The Mirror
astronomy, contest, winners