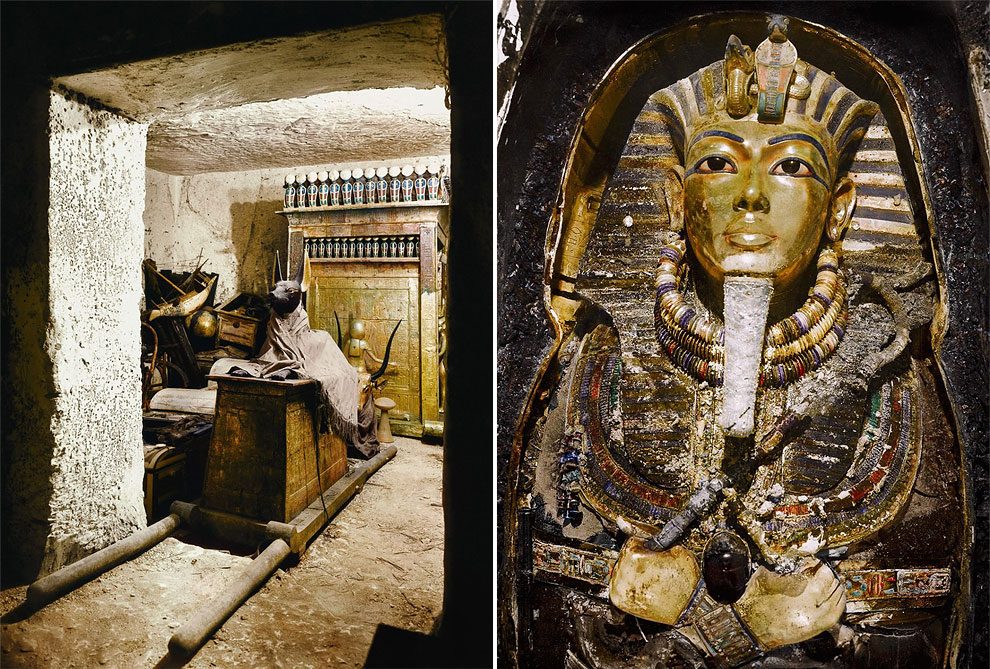 Harry Burton’s photographs capture Tutankhamun’s tomb at the moment of its discovery have enthralled the world for generations, enabling the viewer to witness the ‘Wonderful Things’ the discoverers of the tomb, Howard Carter and Lord Carnarvon, were fortunate to experience first-hand. Burton’s iconic black and white photographs have illustrated the imagination of millions for almost a century, and now a selection of the original negatives and photographs, housed in the archive of the Griffith Institute, University of Oxford, has been digitally colourised by Dynamichrome on behalf of SC Exhibitions and the Griffith Institute. 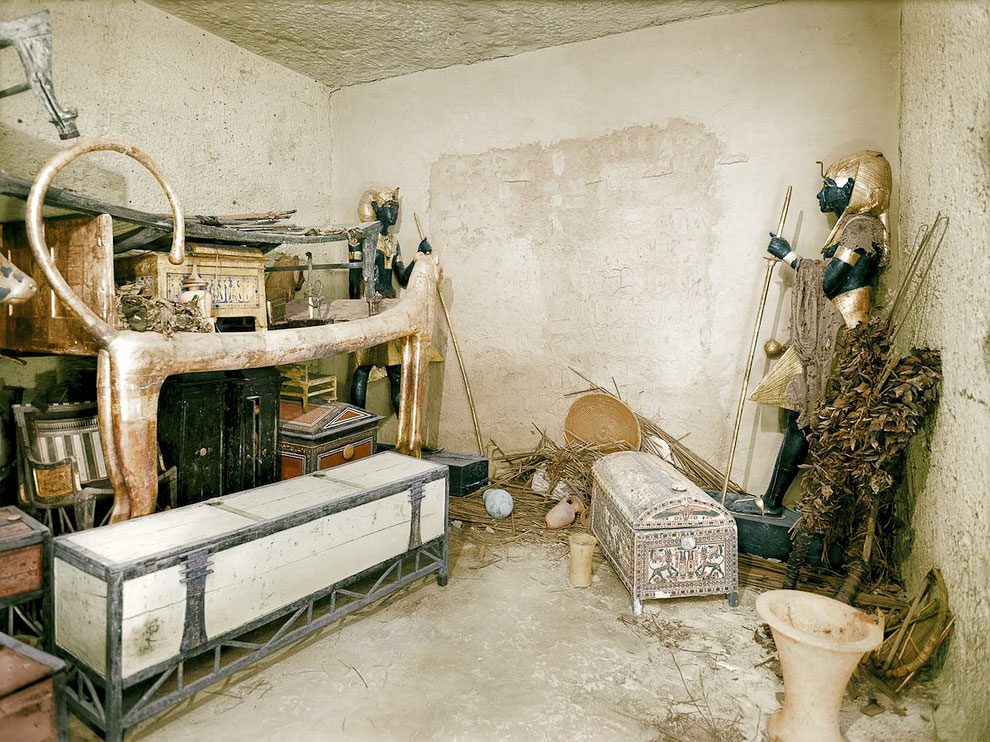 December 1922, Tutankhamun’s Tomb | Objects stacked under the lion couch (Carter no. 35) against the west wall of the Antechamber included an ivory and ebony chest (Carter no. 32), black ‘shrine-shaped boxes’ (Carter nos. 37 and 38) and a child’s chair made of ebony (Carter no. 39): 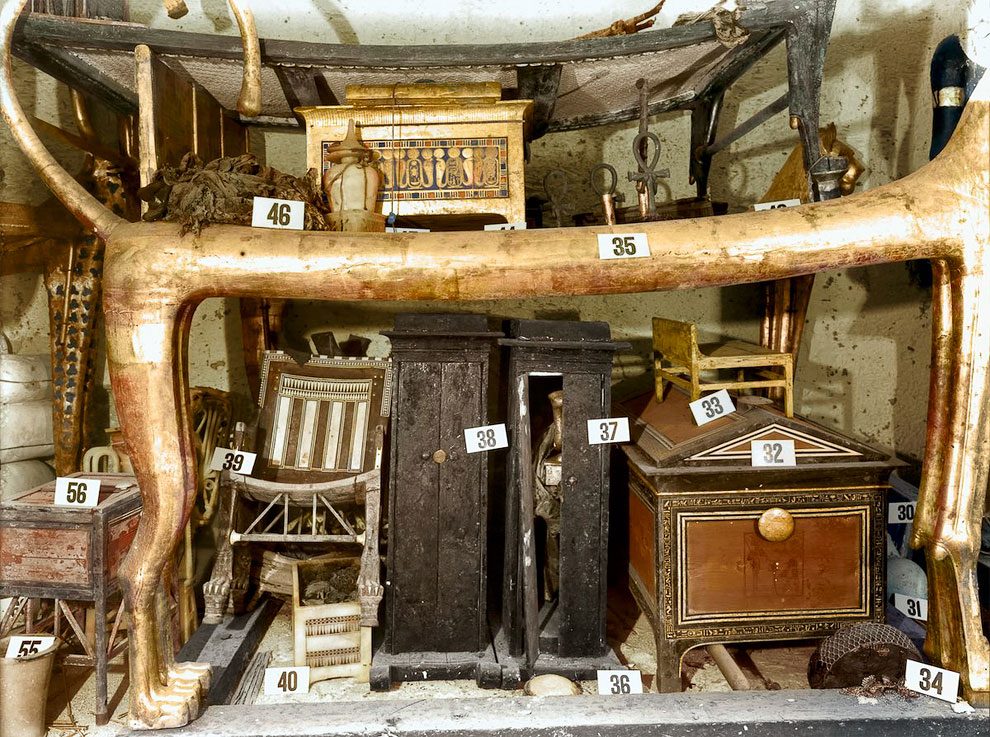 29th November 1923, Tutankhamun’s Tomb | Howard Carter (on the left) working with his friend and colleague Arthur Callender on wrapping one of two sentinel statues of Tutankhamun (Carter no. 22) found in the Antechamber, before their removal to the ‘laboratory’ set up in the tomb of Sethos II (KV 15). These statues had been placed either side of the sealed entrance to the Burial Chamber: 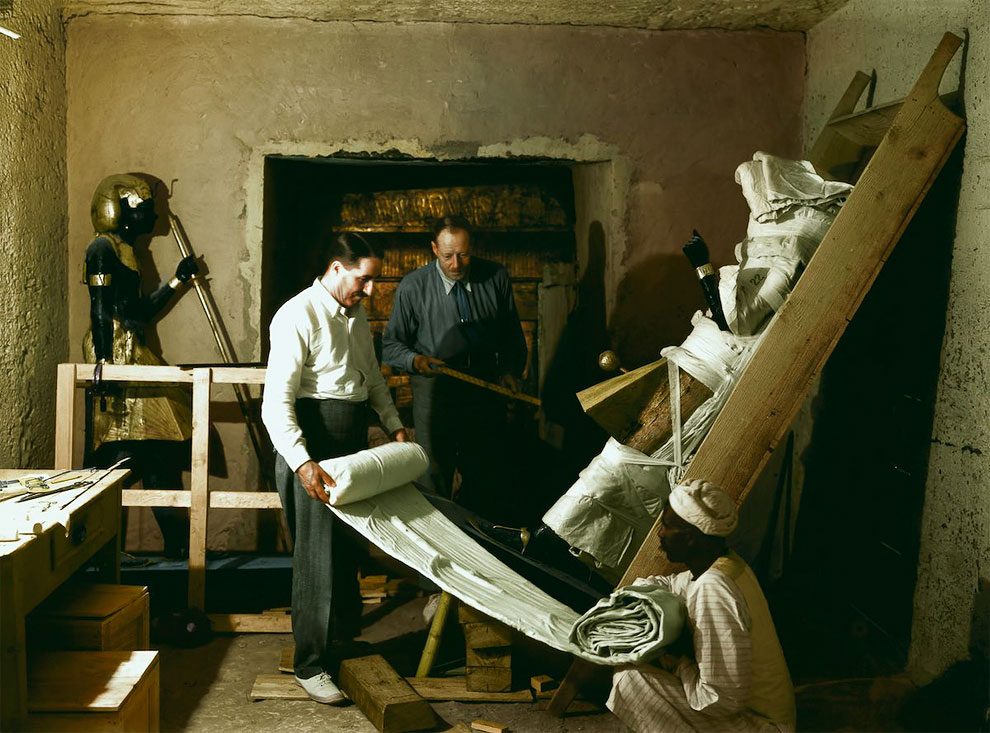 December 1922, Tutankhamun’s Tomb | The rectangular white box (Carter no. 50), in front of the lion couch (Carter no. 35) in the Antechamber, contained, amongst other items, linen garments (shirts, shawls and loin cloths), 18 sticks, 69 arrows and a trumpet: 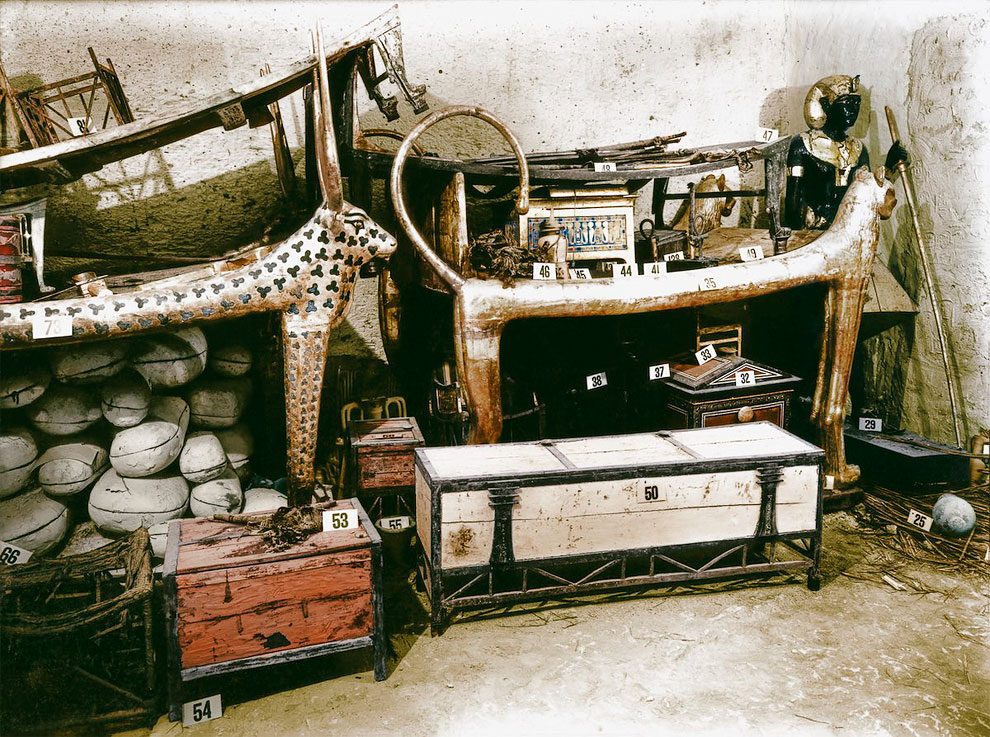 December 1923, Tutankhamun’s Tomb | The linen pall, decorated with bronze ‘rosettes’ (Carter no. 209) inside the walls of the first (outermost) golden shrine (Carter no. 207) in the north west corner of the Burial Chamber: 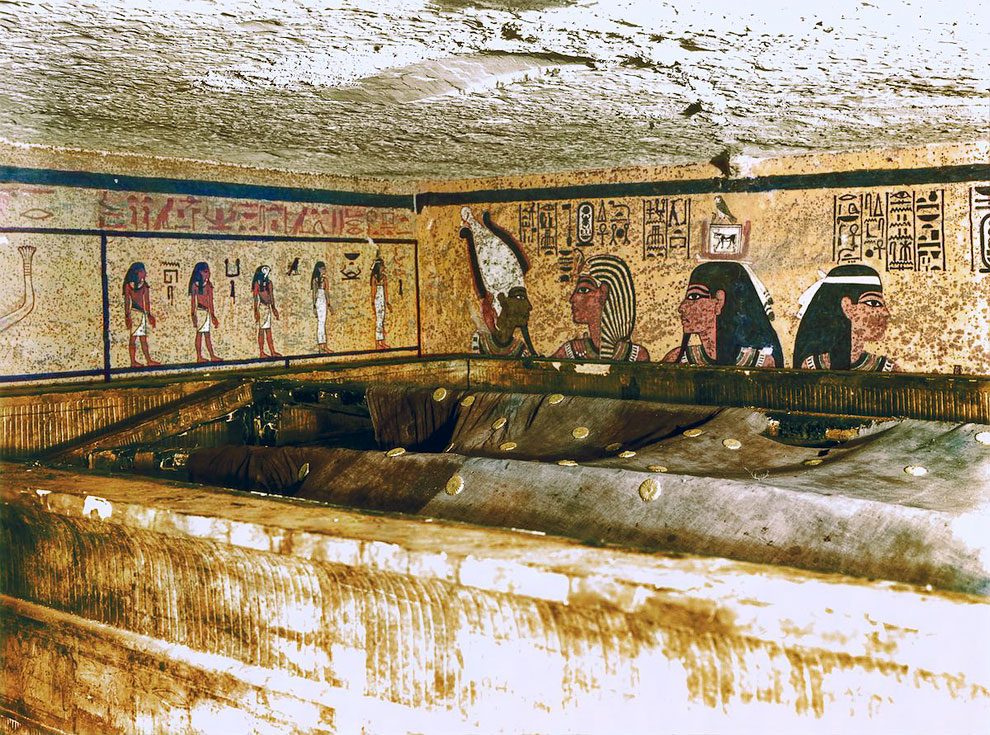 October 1926, Tutankhamun’s Tomb | A line of chests down the centre of the Treasury, ending with the canopic chest (Carter no. 266) which housed the king’s linen-wrapped stomach, intestines, liver and lungs in miniature gold coffins, inside an alabaster canopic box: 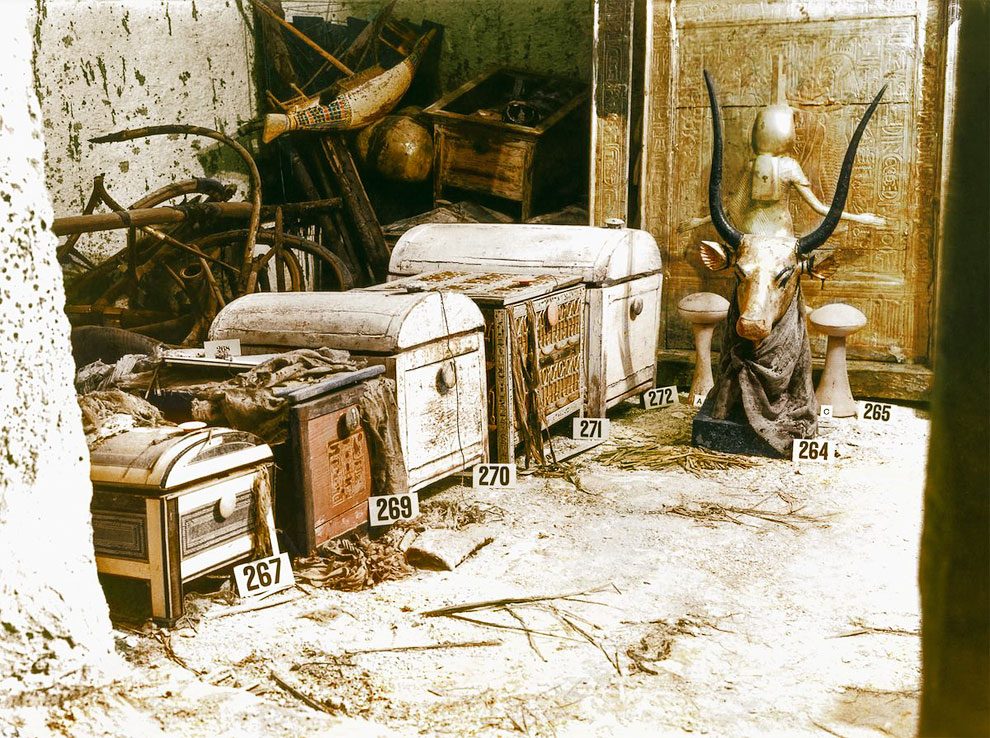 29th/30th October 1925, Tutankhamun’s Tomb | Carter and an Egyptian workman examine the third (innermost) coffin (Carter no. 255) made of solid gold, inside the case of the second coffin. (Carter no. 254): 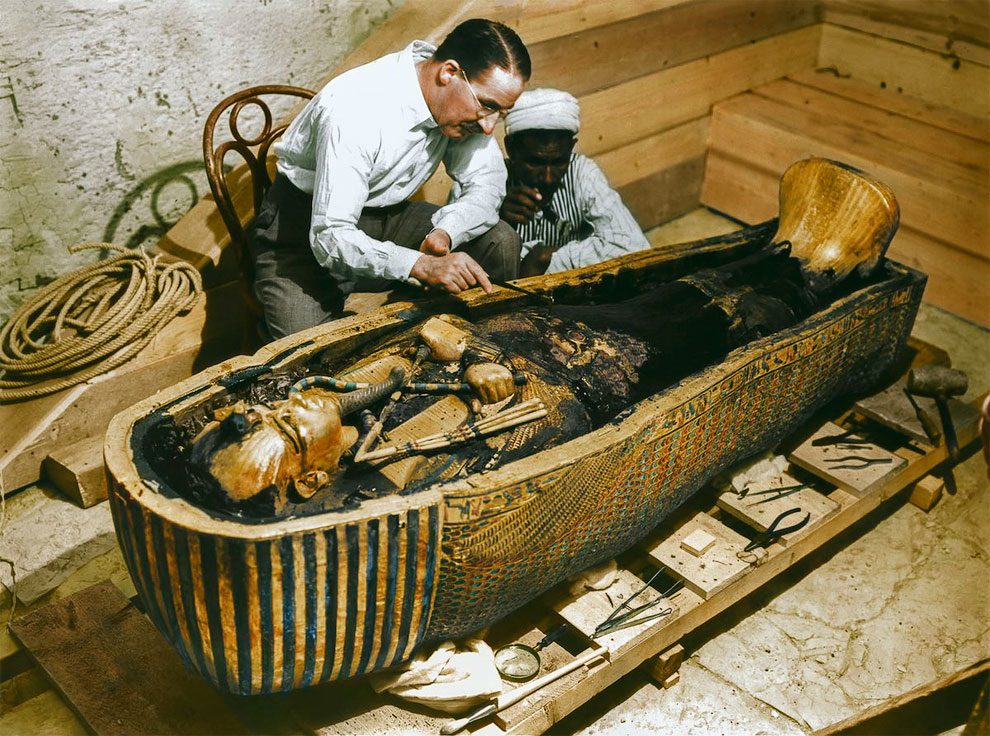 December 1922, Tutankhamun’s Tomb | Objects, including the cow-headed couch (Carter no. 73) and boxes containing joints of meat (Carter nos. 62a to 62vv) piled up against the west wall of the Antechamber: 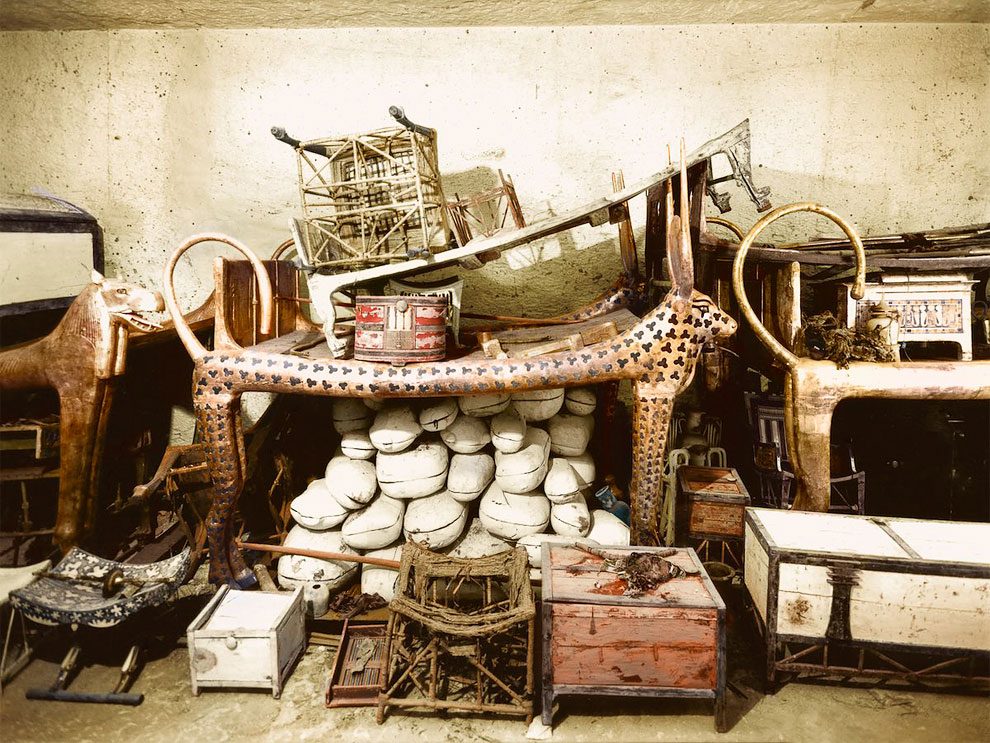 October 1926, Tutankhamun’s Tomb | Three wooden chests (the middle one in the shape of a cartouche) on the floor of the Treasury (Carter nos. 267, 269 and 270). Amongst other items these contained earrings, sandals and a wax model of a heron: 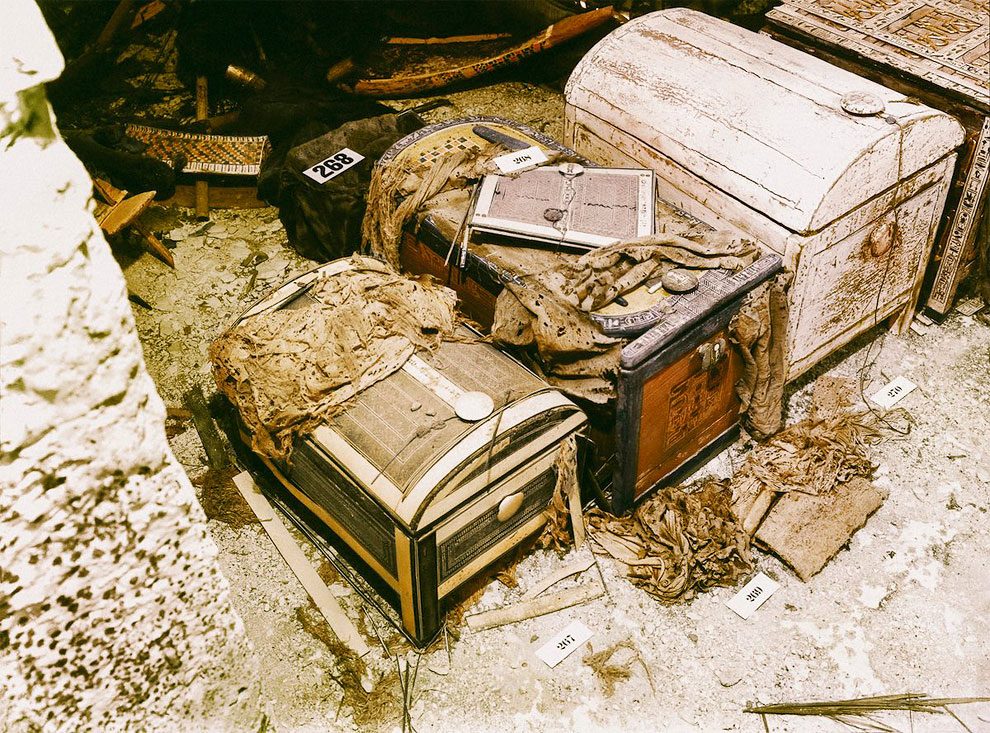 October 1925, Tutankhamun’s Tomb | Howard Carter working on the lid of the second (middle) coffin, still nestled within the case of the first (outermost) coffin in the Burial Chamber: 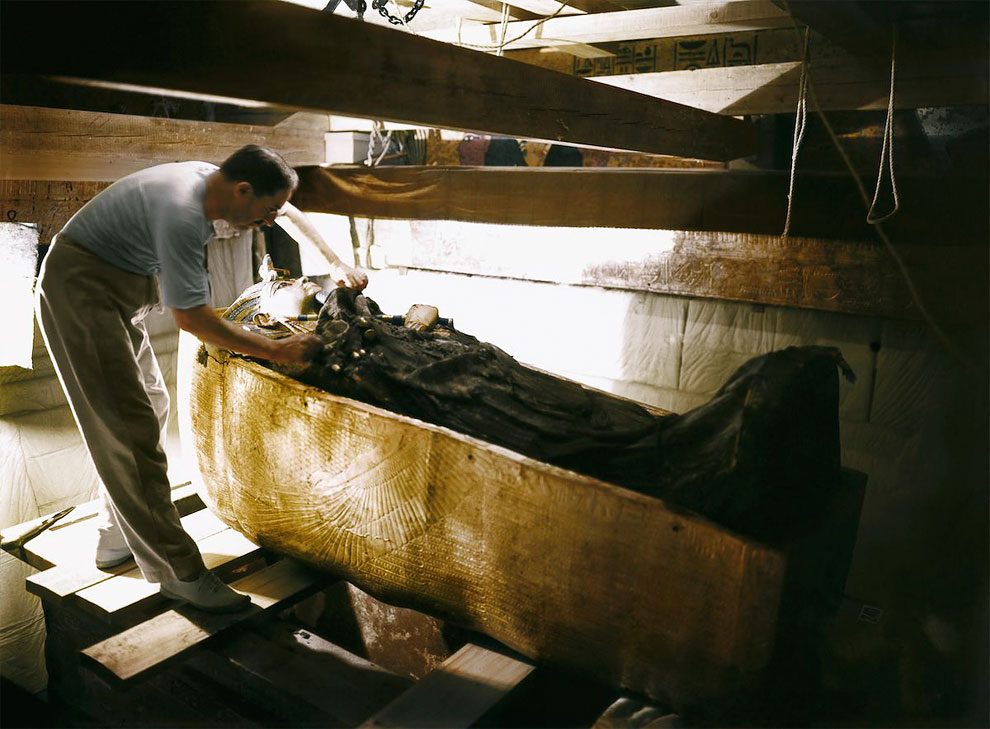 November/December 1923, Sethos II’s Tomb (‘laboratory’) | Arthur Mace (left) and Alfred Lucas working outside the ‘laboratory’ set up in the tomb of Sethos II (KV 15), stabilizing the surface of one of the state chariots (Carter no. 120) found in the Antechamber: 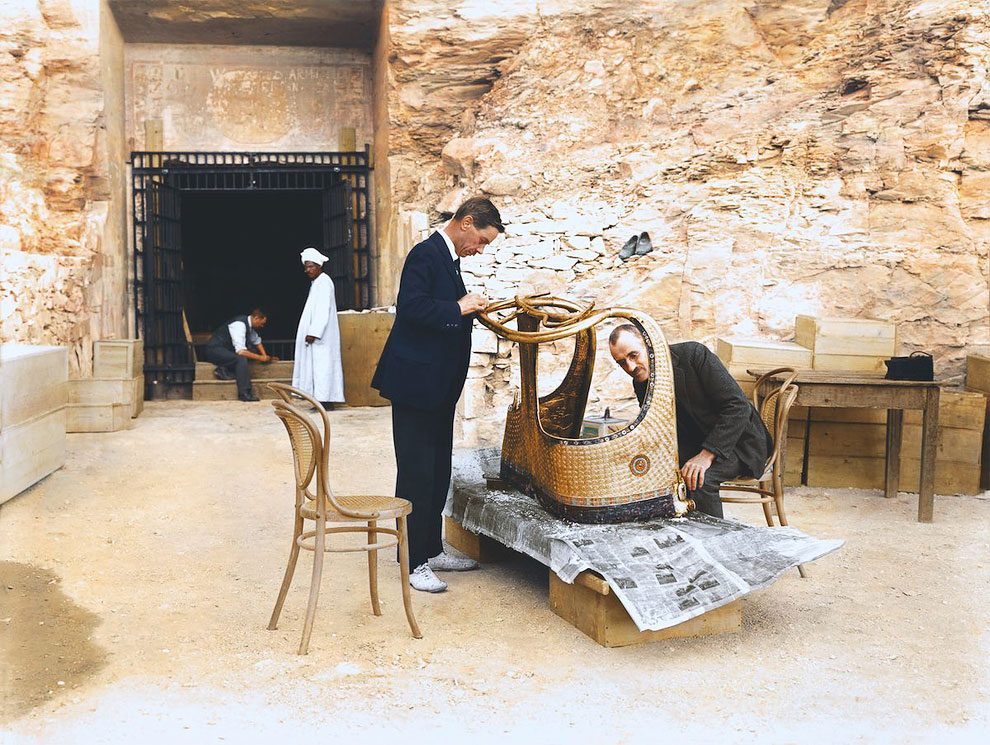 30th December 1923, Tutankhamun’s Tomb | Howard Carter (left), Arthur Mace and an Egyptian workman standing on scaffolding, roll back the linen pall (Carter no. 209) which lay over a gilded, wooden frame (Carter no. 208) between the first (outermost) and second shrines: 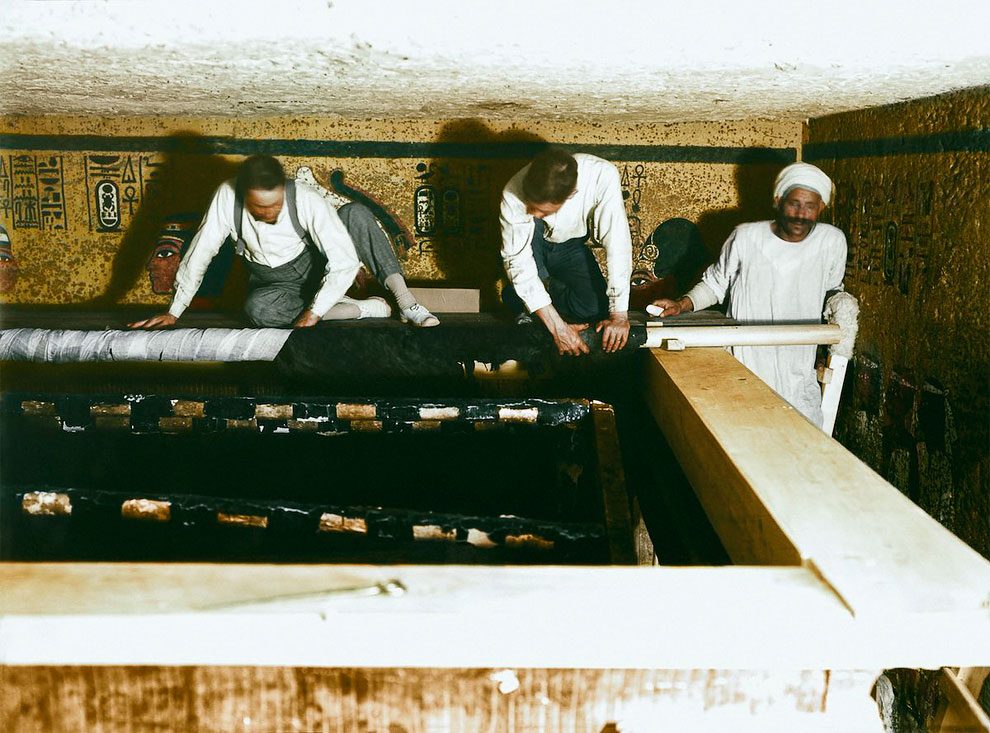 November 1926, Tutankhamun’s Tomb | Objects, including numerous model boats (Carter nos. 284 to 287), stacked against the southern wall of the Treasury: 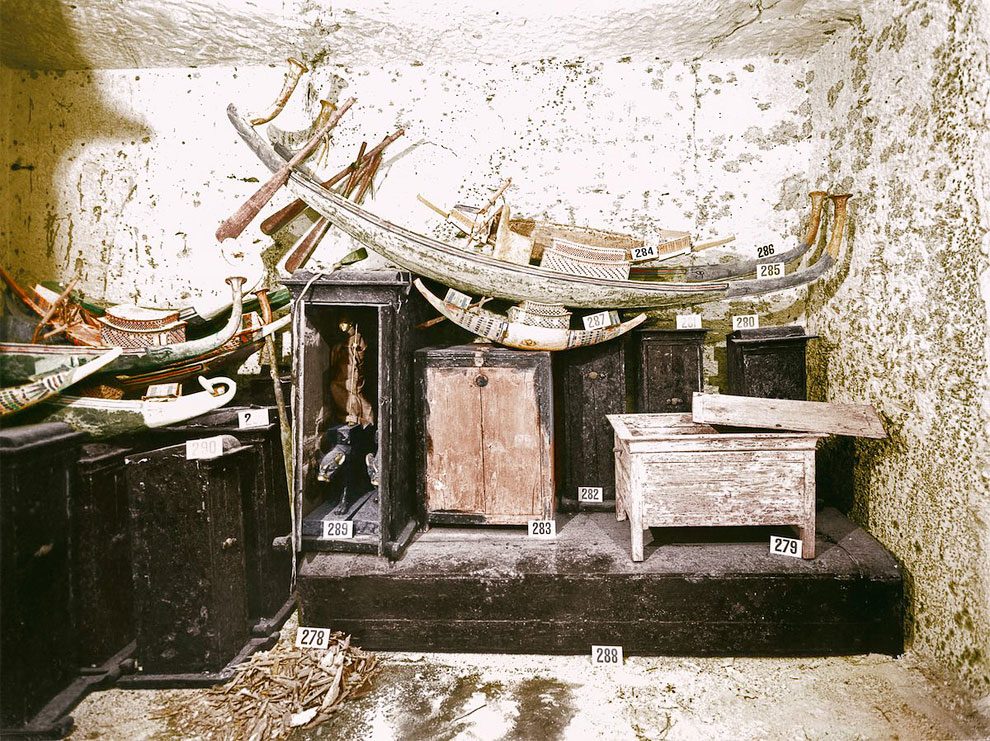 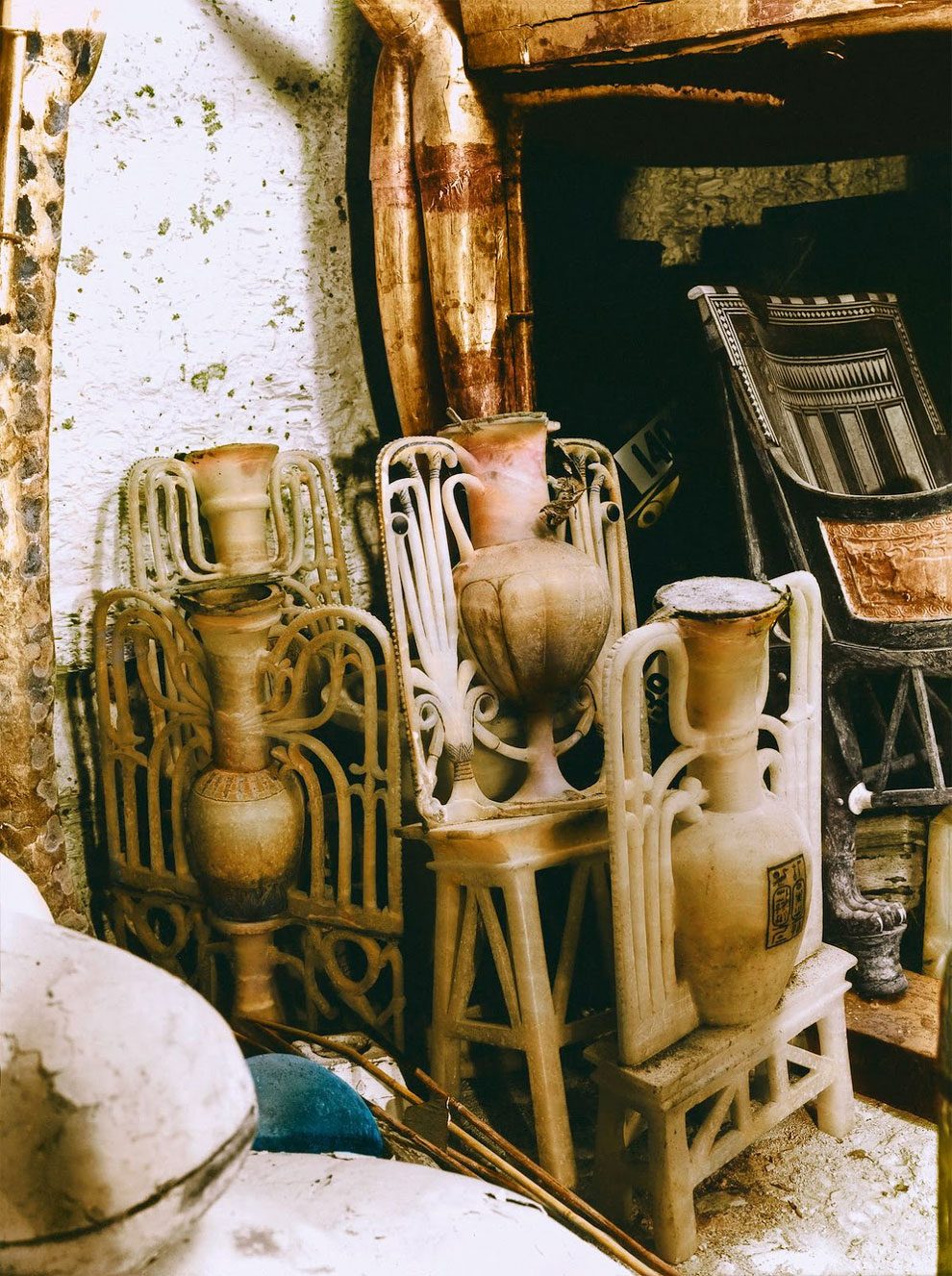 October 1926, Tutankhamun’s Tomb | The Anubis shrine (Carter no. 261) on the threshold of the Treasury viewed from the Burial Chamber. The figure of Anubis was covered with a linen shirt inscribed with the cartouche of Akhenaten: 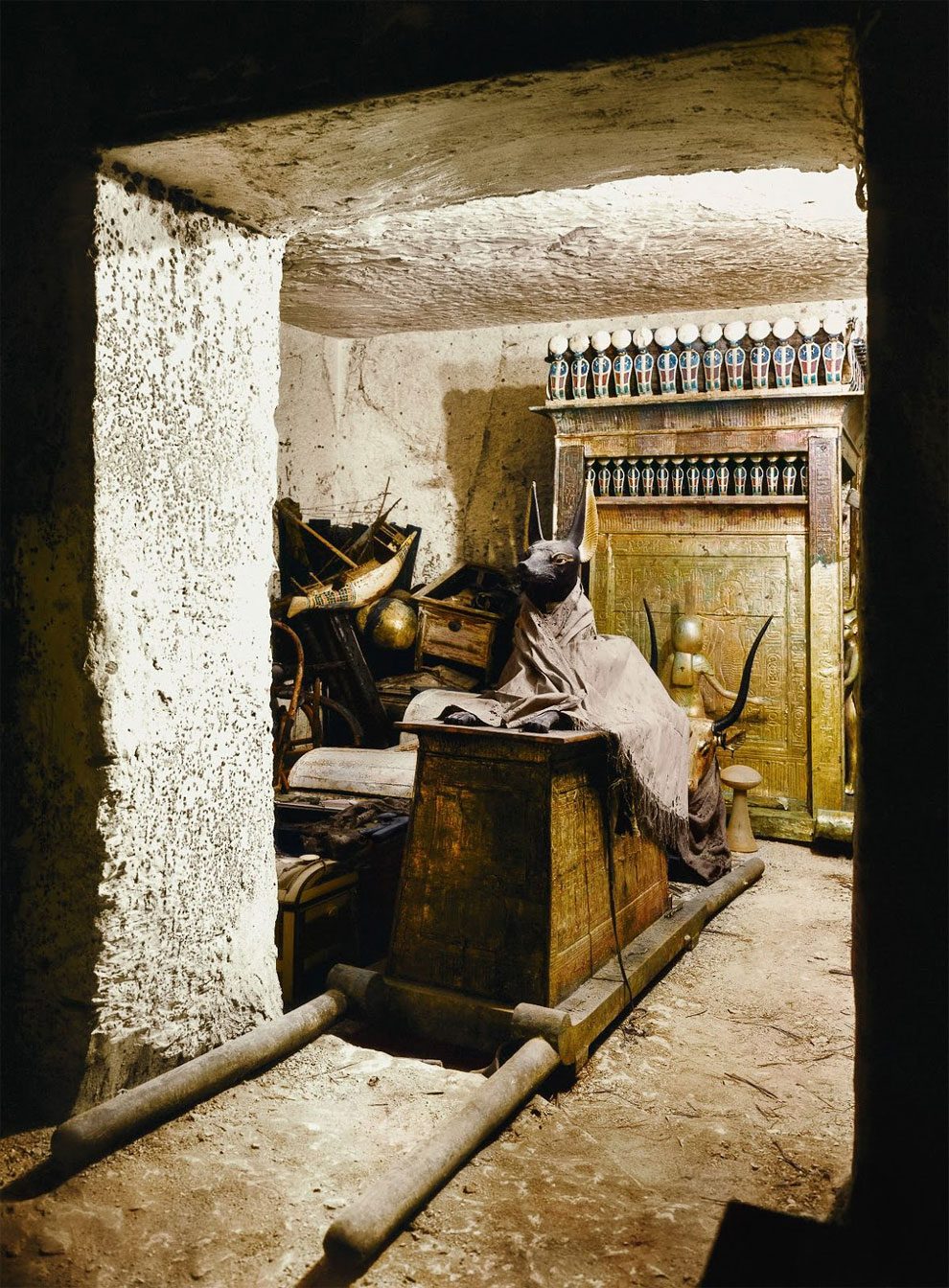 4th January 1923, Tutankhamun’s Tomb | Howard Carter (kneeling), Arthur Callender and an Egyptian workman in the Burial Chamber, looking through the open doors of the four gilded shrines towards the quartzite sarcophagus: 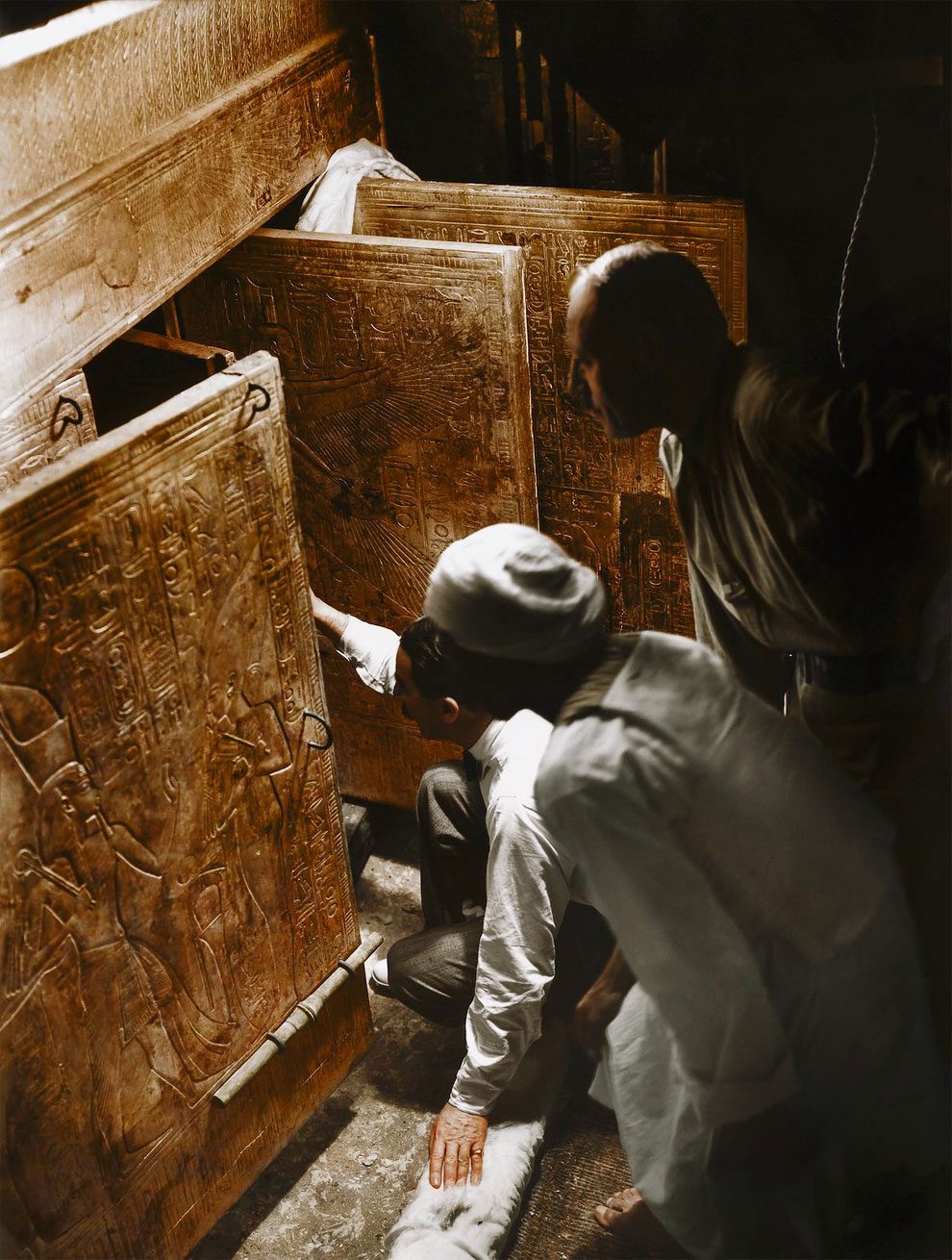 January 1924, Sethos II’s Tomb (‘laboratory’) | Arthur Mace (standing) and Alfred Lucas (sitting) working inside the makeshift ‘laboratory’ (set up in KV 15, the tomb of Sethos II) on the conservation of one of the two sentinel statues from the Antechamber (Carter no. 22). The statue shows the King wearing the nemes headdress, kilt and sandals, and carrying a mace and a staff: 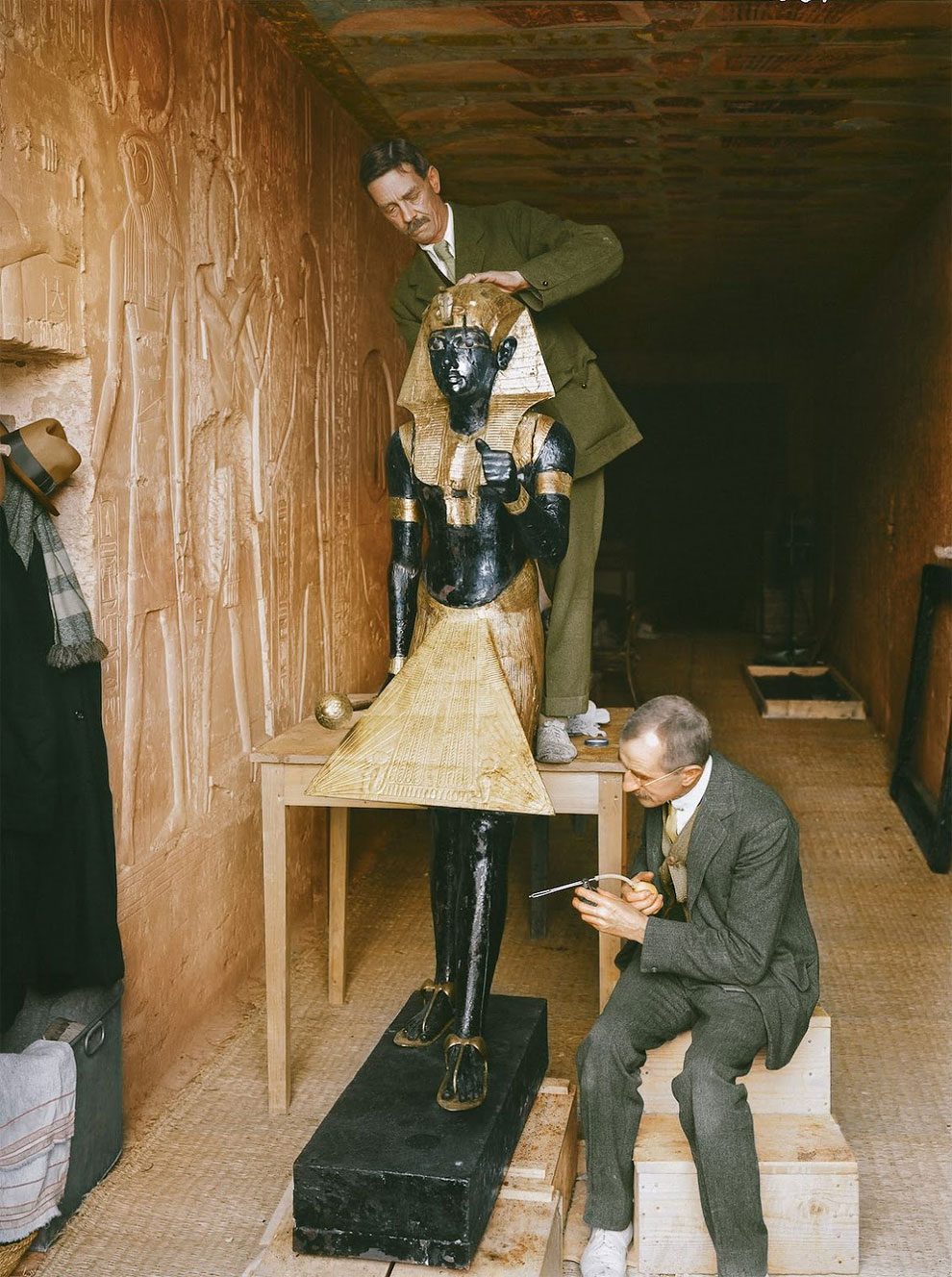 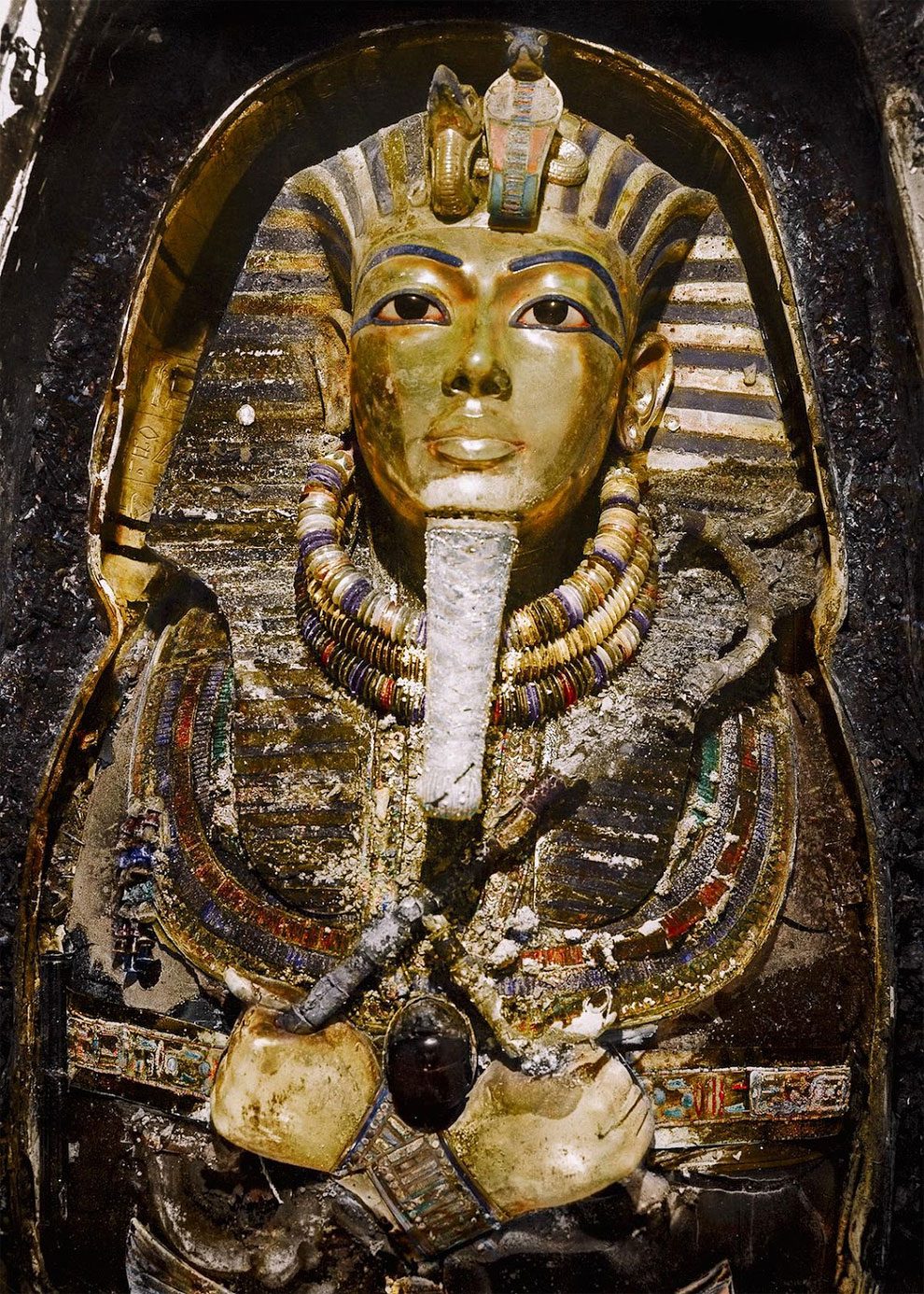 December 1923, Tutankhamun’s Tomb | Howard Carter (centre), Arthur Callender and two Egyptian workmen lifting one roof section from the first, outermost shrine (Carter no. 207). With its double sloping roof, the shape of this shrine resembles that of a ‘sed festival pavilion’; it was made of from twenty separate oak sections, held together by a variety of different joints: 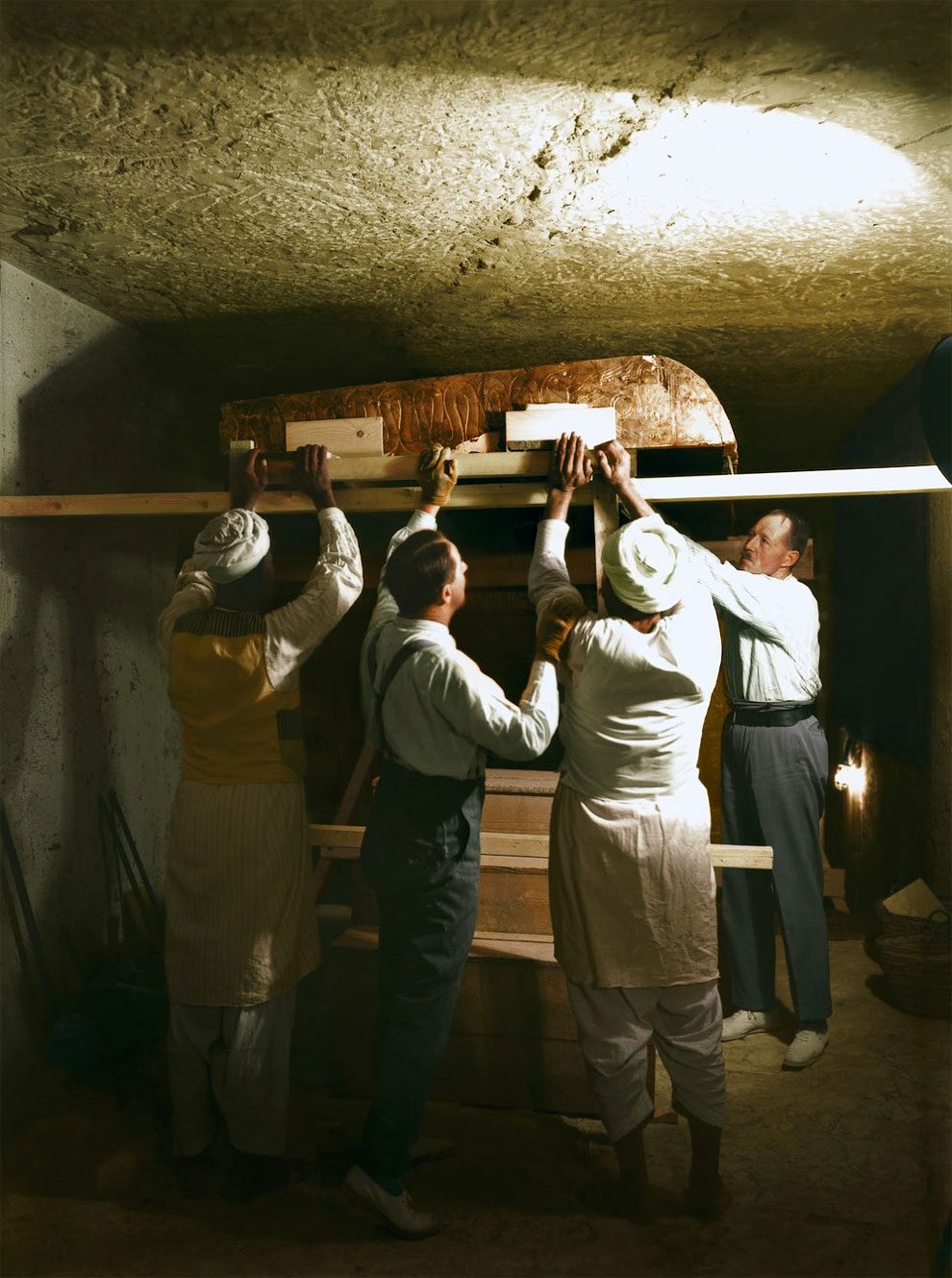 2nd December 1923, Tutankhamun’s Tomb | Howard Carter (at the top of the stairs), Arthur Callender and Egyptian workmen removing the wall between the Antechamber and the Burial Chamber to enable the dismantling of the four golden shrines enclosing the sarcophagus: 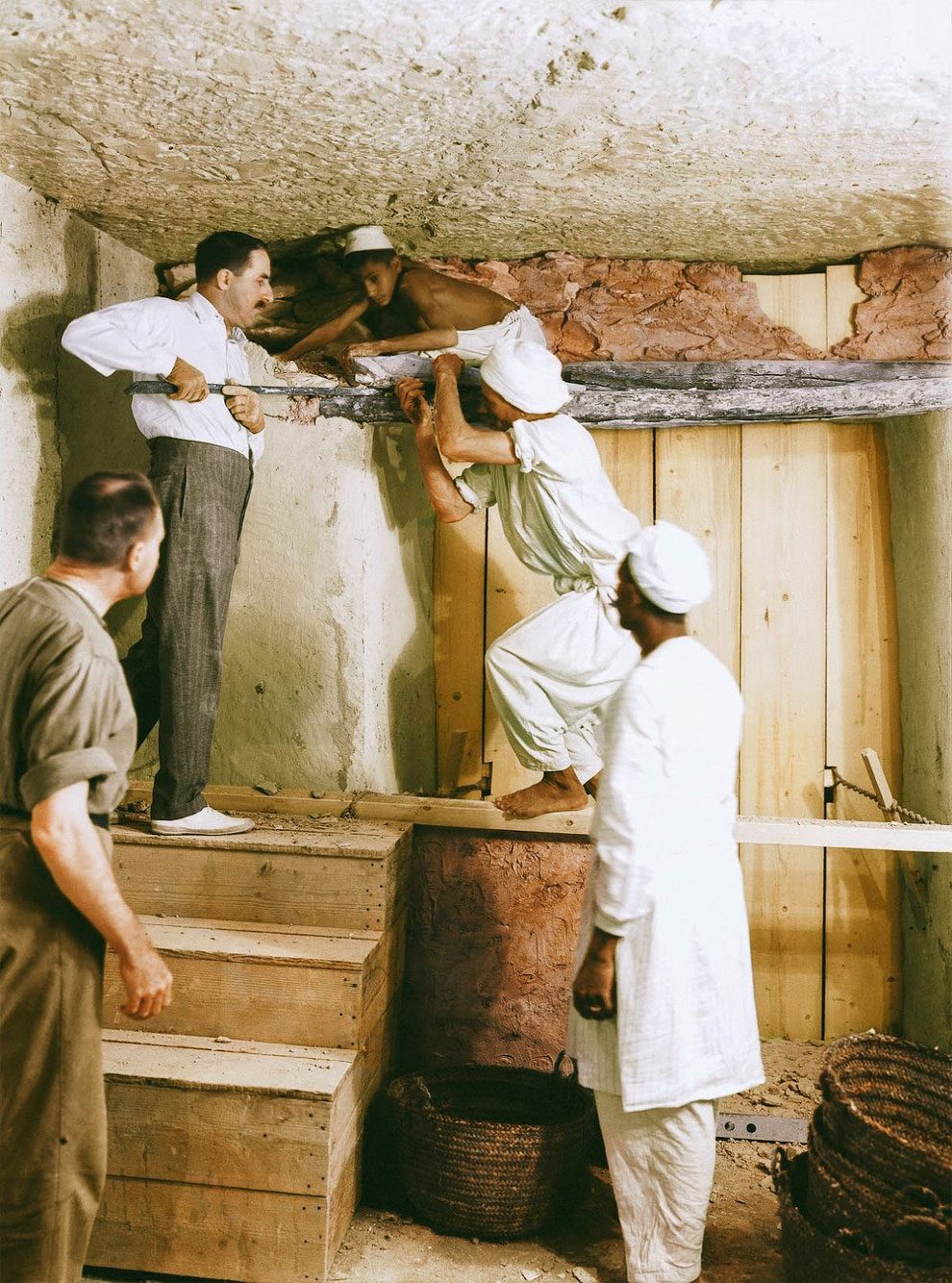 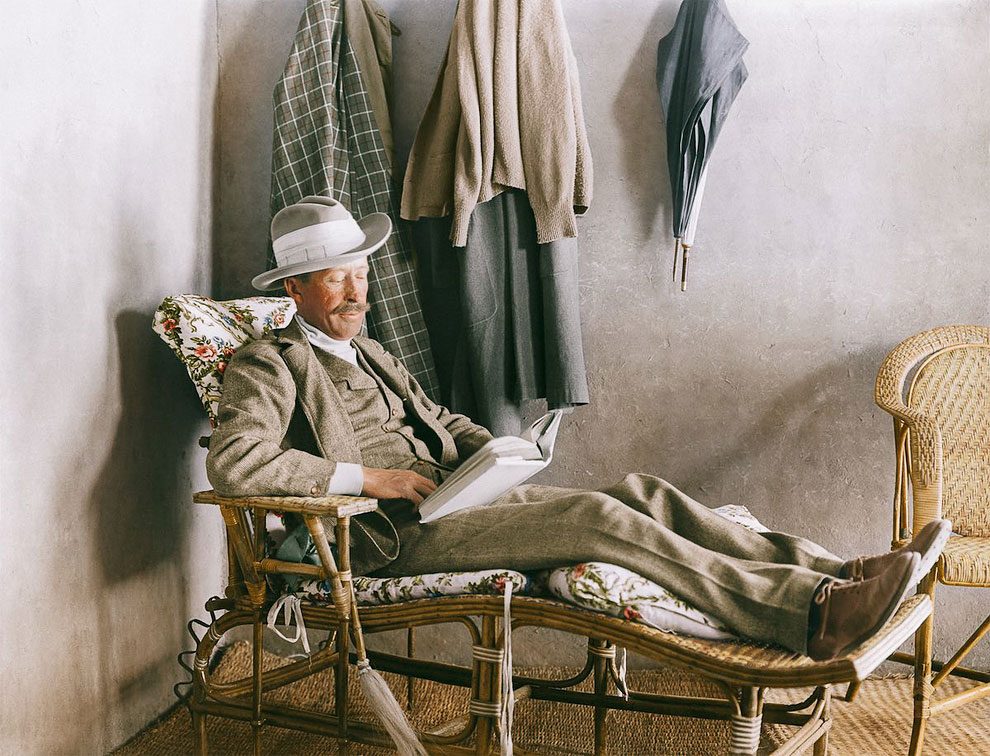 Absolutely Stunning Crocodile Photos, 65 Million Years In The Making
Abandoned Asbestos Mines Still a Hazard in India
Mesmerizing Before And After Photos Of Drag Transformations
Stunning Portraits of Wild Animals by Brad Wilson
The World's Largest Sauna With Beautiful Panoramic Views Opens In Norway
Photos Of Beautiful US Marine Wives on “Jane Wayne Day”
Fallas Festival in Spain
Virtual Traveller Used Google Street View To Explore Poland During Quarantine, Here’s What She Found
Portrait Photos Of White Wolf AKA Chief John Smith, The Oldest Native American To Have Ever Lived
Olympus Mons - The Largest Volcano in The Solar System
Yao Ethnic Women Keep Long Hair Tradition Alive
This Woman And Her Cat Have Been On The Most Gorgeous Sailboat Adventure Since 2006
You Have To See These Astonishing Photos Taken By A 14-Year-Old Boy
“Noche Buena”: A Christmas Eve Dinner on Philippines
These Photos From An Abandoned Doll Factory Will Fuel All Of Your Nightmares
Stuning Photos Of A Children's Military Boarding School In The Ukraine
Japanese Photographer Has Created Amazing Panoramic Images Of The World's Largest Salt Flat In Bolivia
Huge Bikini Snow Show As Russians Mark The End Of The Skiing Season
“Days of Night – Nights of Day”: Photographer's Vision Of The Northernmost City In The World
Exclusive Photos Of Facebook's Sprawling New HQ, Designed Frank Gehry
Little Polish Village Where Every House Is Covered In Colorful Flower Paintings
Stunning Portrait Drawings By Winnie Truong
This Couple Builds A Portland Tiny-Home, Lives For Free And Endlessly Travels In A VW Bus
Extreme Surfing On Arctic Circle
1920s, colorized, discovery, photos, stunning, tutankhamun