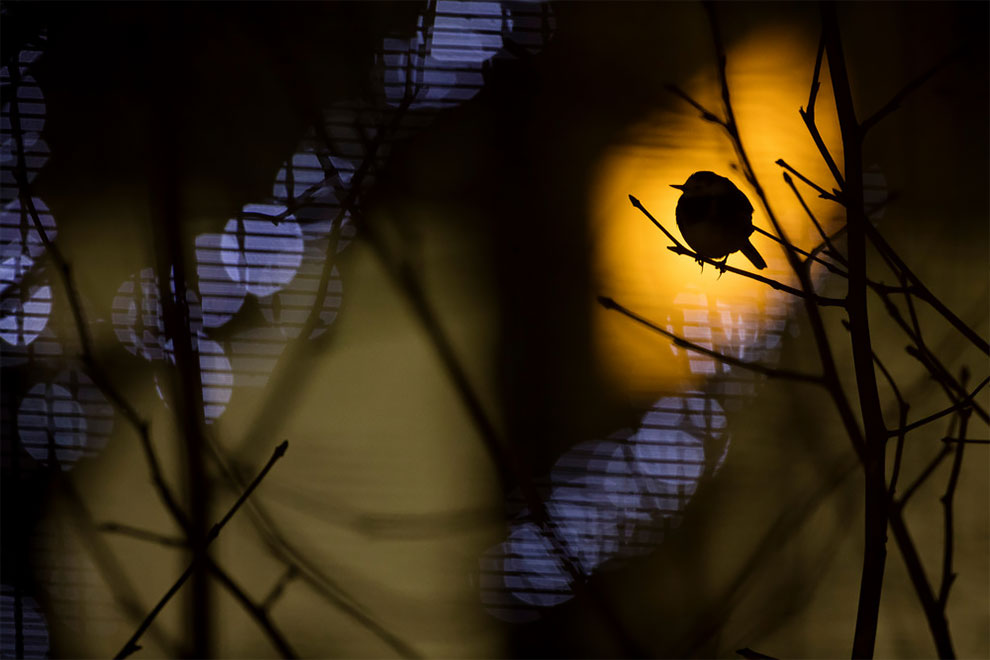 “In winter, pied wagtails roost communally in urban areas, both for protection and for the additional warmth given off by buildings and lights. This extra degree or two can make the difference in harsh weather. Here, a single individual out of hundreds is silhouetted by the lights of Terminal 5 at Heathrow airport”. (Photo by Daniel Trim/British Wildlife Photography Awards 2017) 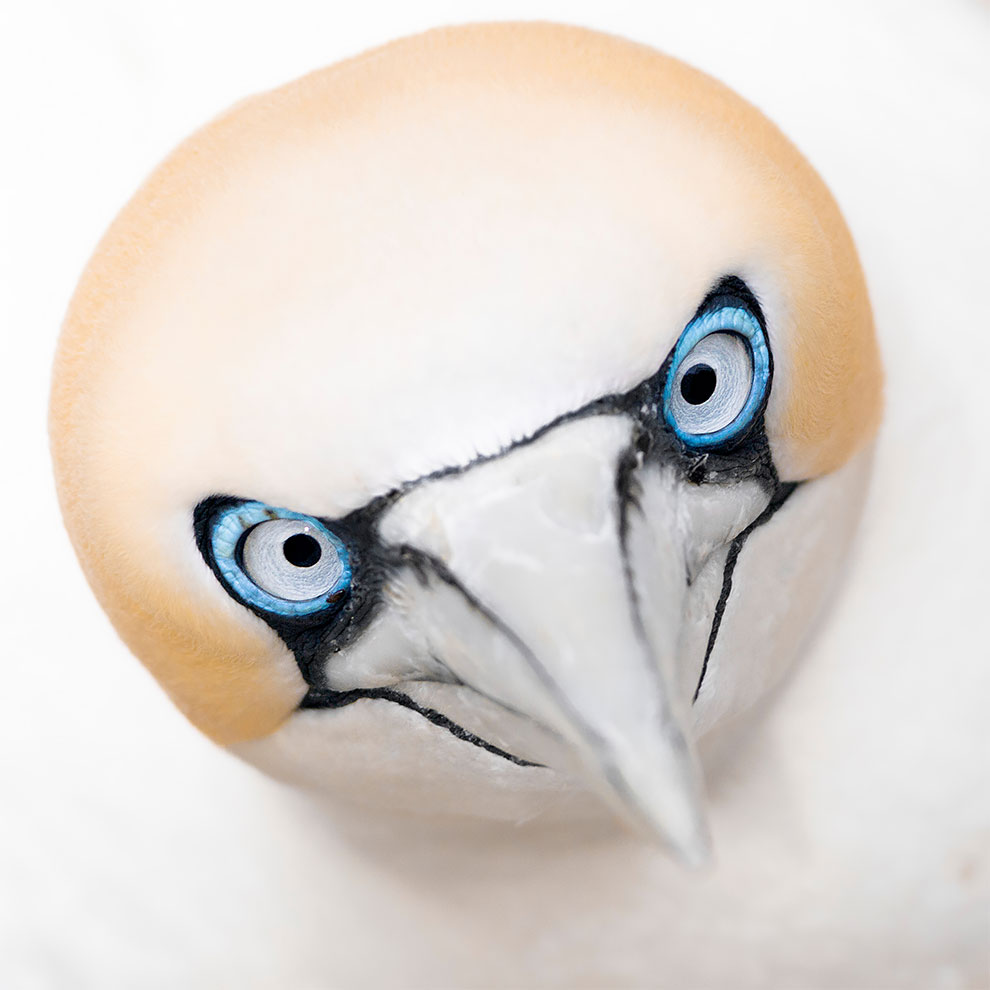 “Looking for a different perspective for a gannet portrait, I positioned myself on top of the cliffs. Looking straight down I had an intimate view of a group of gannets sitting on a higher ledge. I talked to them and one gannet looked up, revealing its rounded head, symmetry and beautiful blue eyes against its white feathers”. (Photo by Melvin Redeker/British Wildlife Photography Awards 2017) 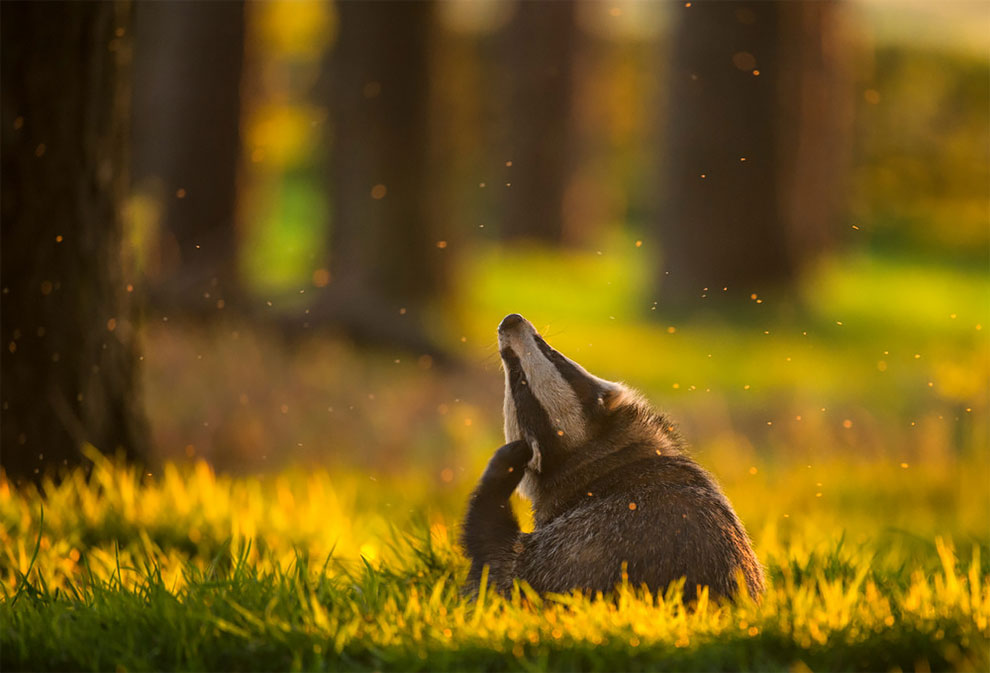 “In 15 years of working with badgers I’ve never seen a badger sit out in the open to have a scratch. I was sat concealed behind a tree and downwind so it was especially nice that the badger had his back to me, demonstrating just how inconspicuous and inconsequential my presence was”. (Photo by Andrew Parkinson/British Wildlife Photography Awards 2017) 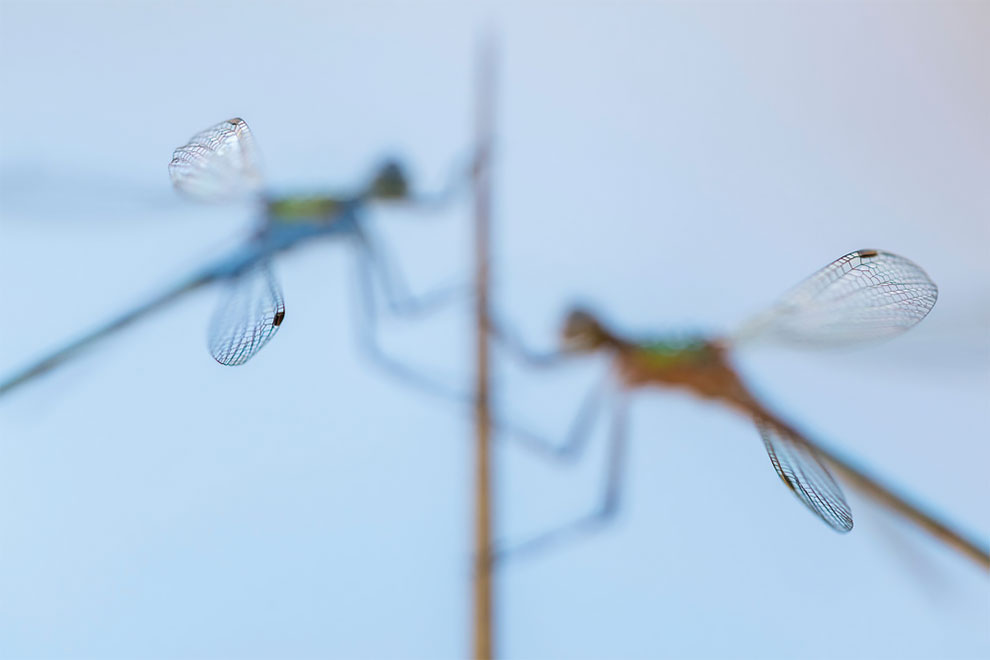 “I’m always looking to capture less conventional close-ups – maybe through creative lighting, use of depth of field or my choice of focus. With this image, I wanted to place the emphasis on the delicacy and design of the damselfly’s wings, so carefully placed my focus on the wingtips. This type of shot is very Marmite – you’ll either love it or hate it!”. (Photo by Ross Hoddinott/British Wildlife Photography Awards 2017) 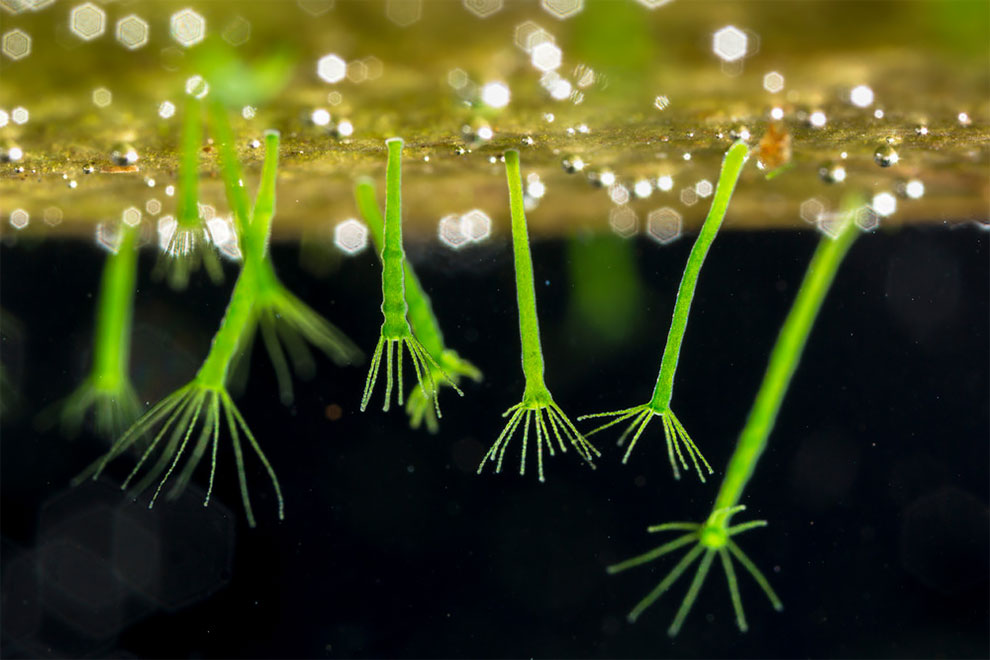 “The diversity of life in my small garden pond never ceases to amaze me, but many of the most fascinating subjects require high magnification to be appreciated. Measuring only a few millimetres in length, these green hydras were dangling from the underside of a lily pad. They capture prey with stinging tentacles and when disturbed they quickly retract into a small, compact green blob that is easily overlooked”. (Photo by Alex Hyde/British Wildlife Photography Awards 2017) 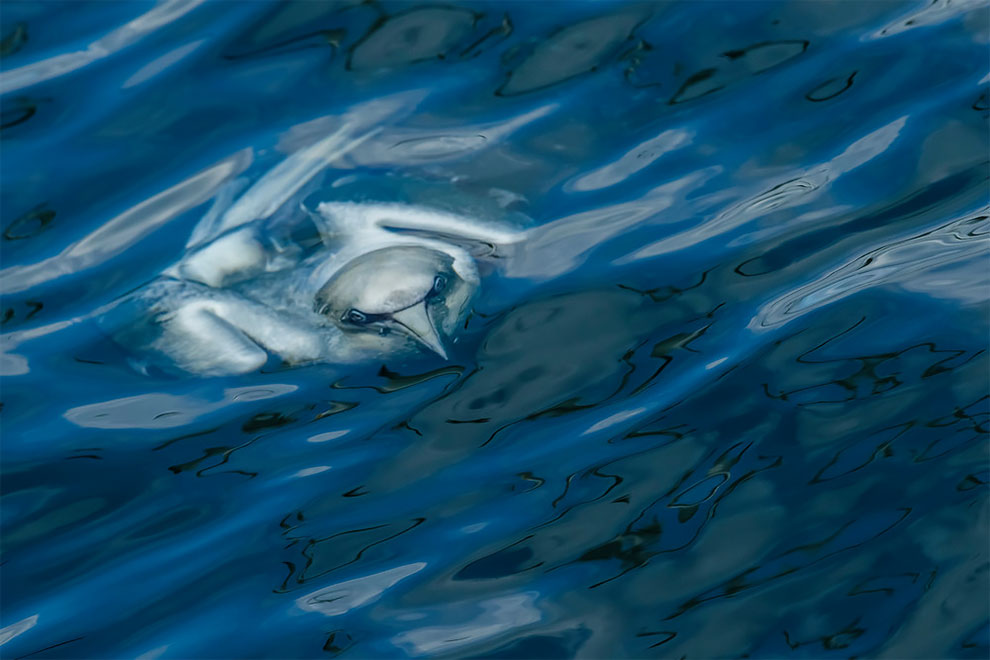 “Having seen many diving gannet photographs I wanted to try and capture something a bit different. I watched the birds fishing and was fascinated by the way the gannets would emerge from nowhere to steal another bird’s prey. I was keen to capture the moment just before they broke the surface, while they were still in ‘stealth mode’. A combination of bright sunshine and cloud made setting the exposure difficult, but the result has some lovely patterns on the water”. (Photo by Caron Steele/British Wildlife Photography Awards 2017) 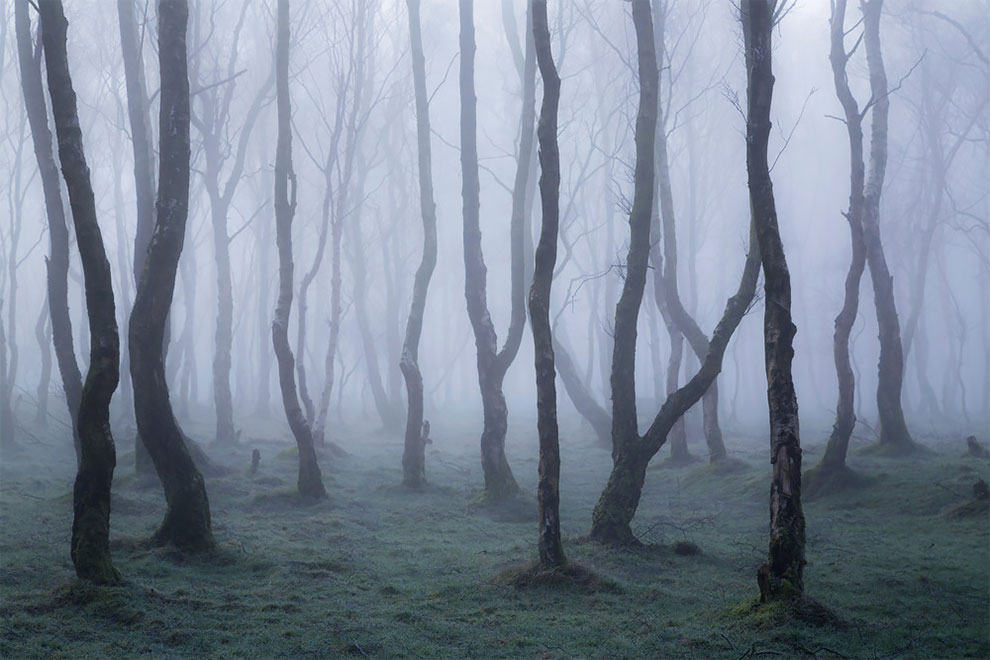 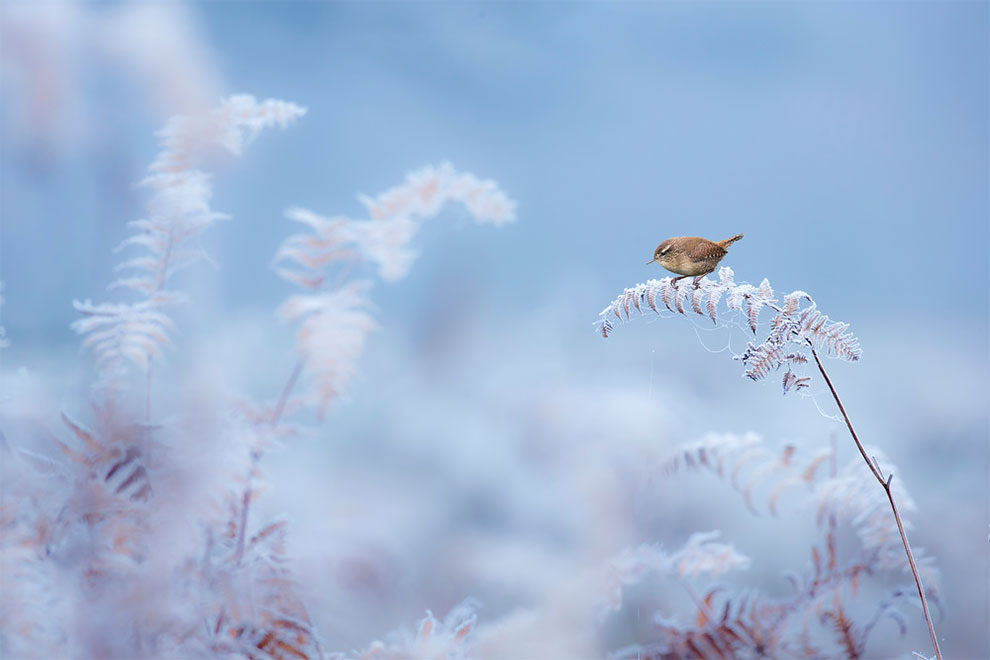 “Following a cold, clear night I visited a local woodland to photograph deer. The temperature had dropped well below freezing during the night and frost clung to the trees and foliage, completely transforming the landscape … After some time I noticed a wren flitting around in the frost-encrusted ferns. I set up my tripod and waited, following it with my lens as it moved. Eventually, it alighted on the top of a fern and I inched my way back in an attempt to show the wren in its wintry environment”. (Photo by Ben Hall/British Wildlife Photography Awards 2017) 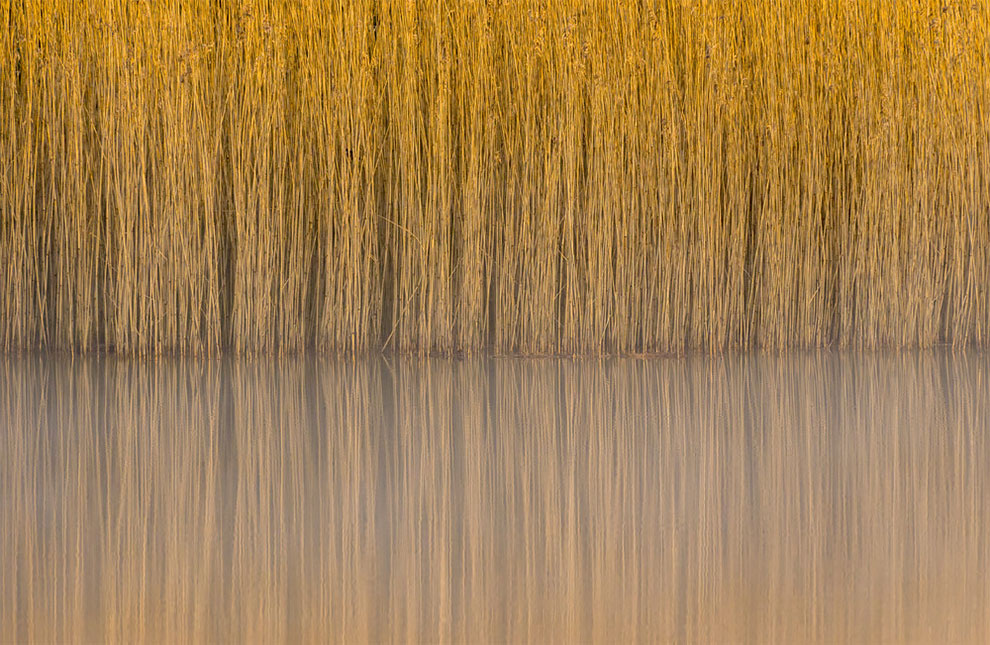 “I’d always been fascinated by the almost abstract patterns and reflections of these common reeds, but the conditions had never been perfect, despite numerous visits. However, on this morning the water was still and the light was soft and I was able to capture the image I was after”. (Photo by Steve Palmer/British Wildlife Photography Awards 2017) 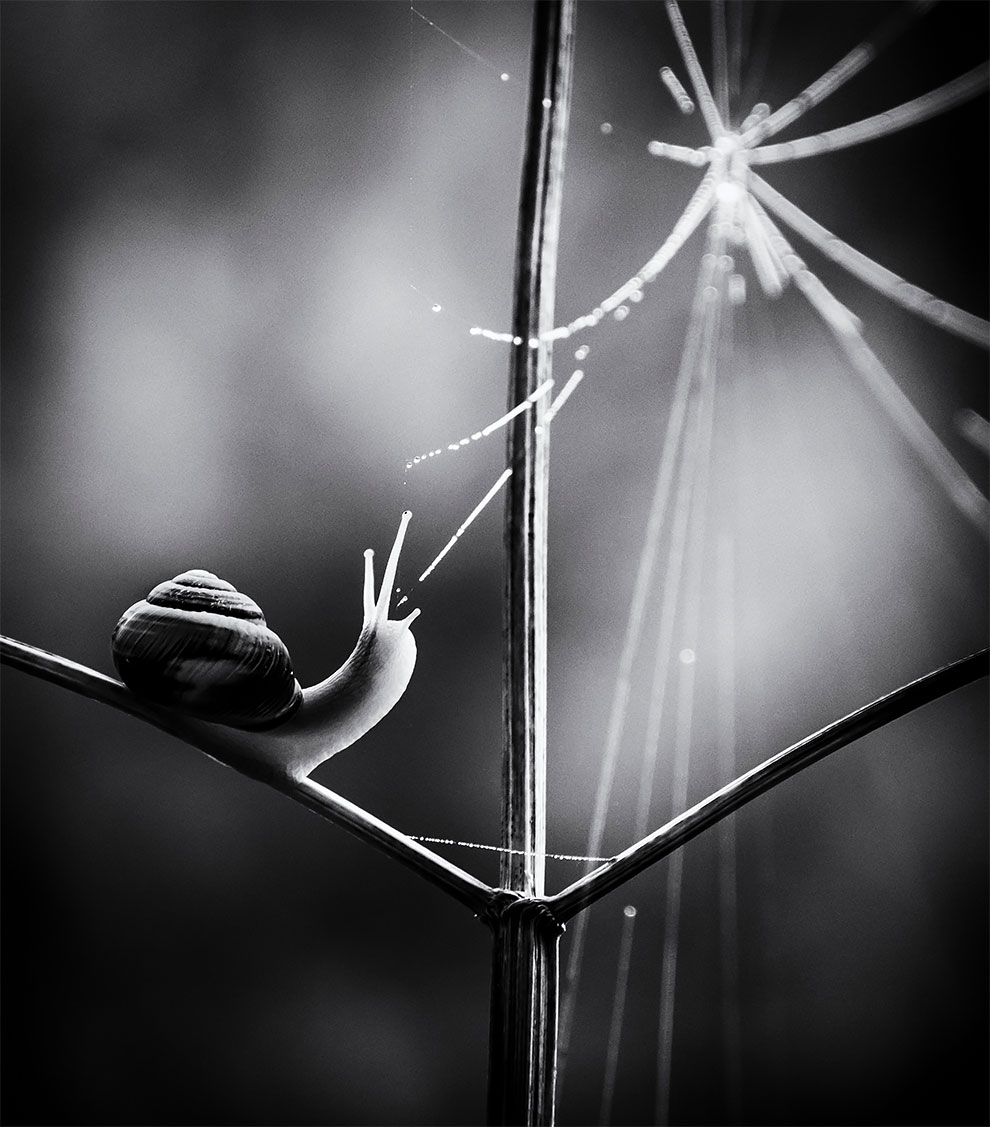 “I took this on a very misty day in Thetford Forest. It was too misty to photograph the trees so I tried looking for something closer up; I spotted this little snail making its way up a plant stem. I was lucky that at the moment I took this image the snail looked up towards the spider web”. (Photo by Paula Cooper/British Wildlife Photography Awards 2017) 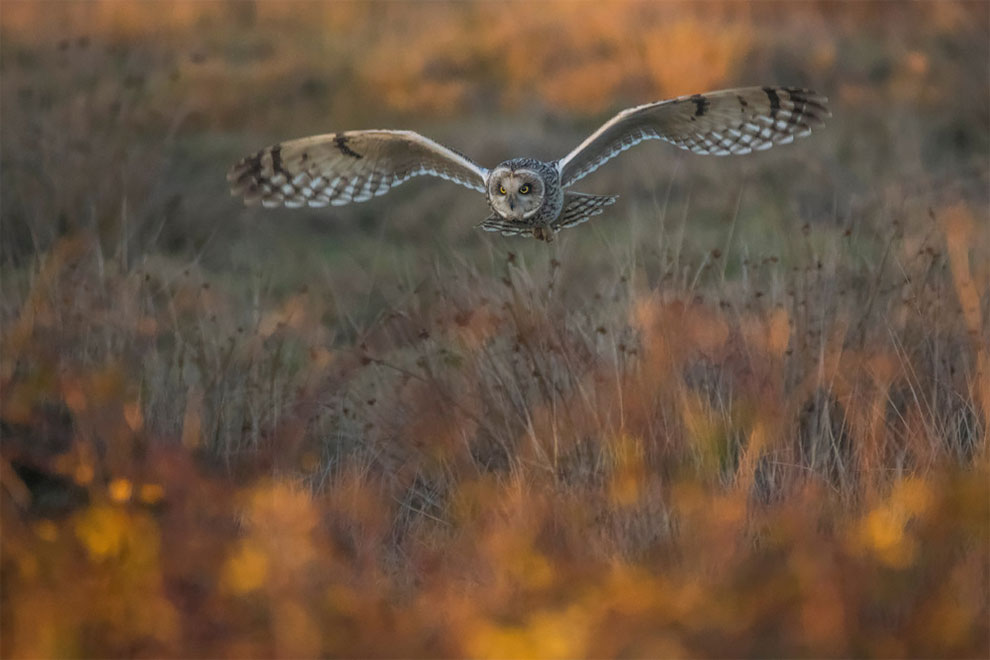 “As the light began to fade a short-eared owl emerged to hunt for prey above the marshes. Standing on the sea wall I was amazed when it began to fly towards me – it is a moment I will never forget!”. (Photo by Matthew Roseveare/British Wildlife Photography Awards 2017) 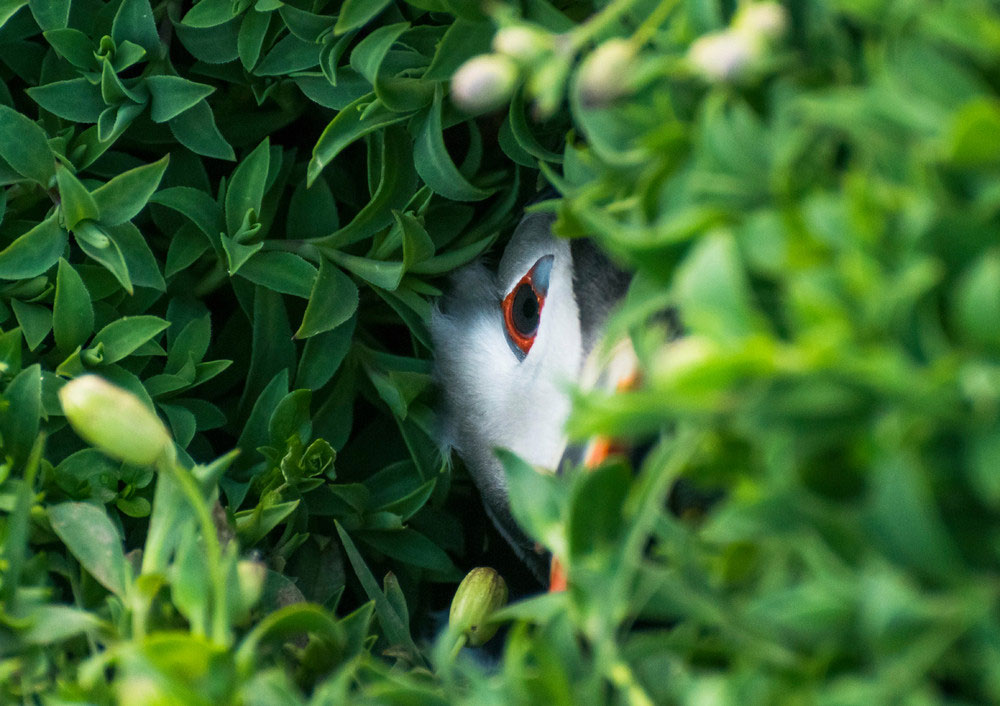 “… I was lucky enough to be sat by a side window of one of the hides when this little puffin poked his head out of its burrow. This is my favourite shot from the sequence as the puffin is well hidden by the sea campion growing at the entrance to the burrow”. (Photo by Andy Teasdale/British Wildlife Photography Awards 2017)

Ben Andrew won the British seasons category for his portfolio of images taken in Holme Fen national nature reserve, Cambridgeshire, which portrayed British wildlife at its best in each of the four seasons. 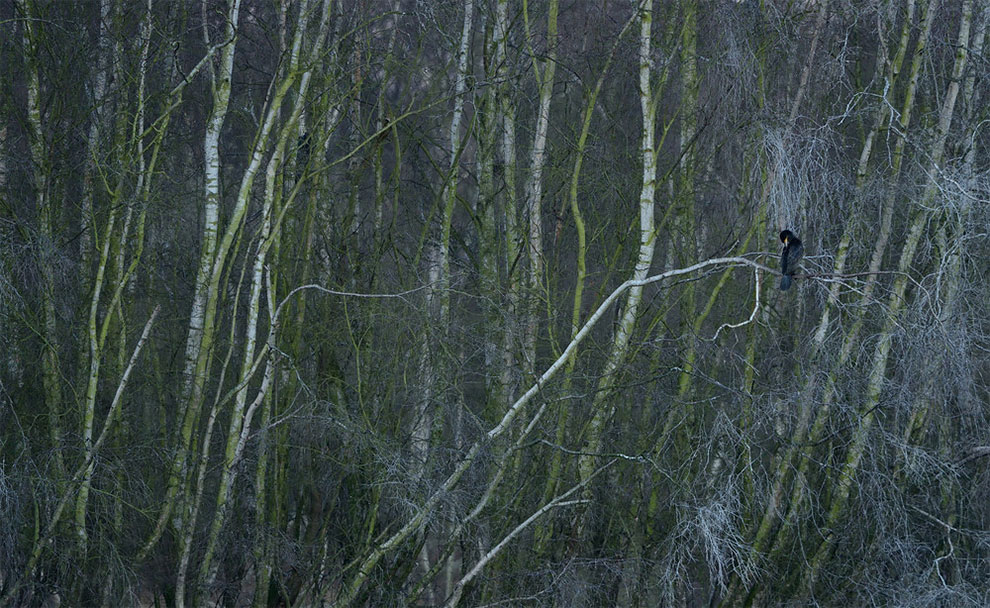 “In late winter, the cormorants begin to return to the trees, ready for the short, but busy, nesting season. At first, individuals were spending the days sitting around on branches, occasionally guarding nests or adding branches to them. However, after a short while the males started to display, attract partners and mate. During this time it was still cold and the lakes had a gloomy, eerie feel to them”. (Photo by Ben Andrew/British Wildlife Photography Awards 2017) 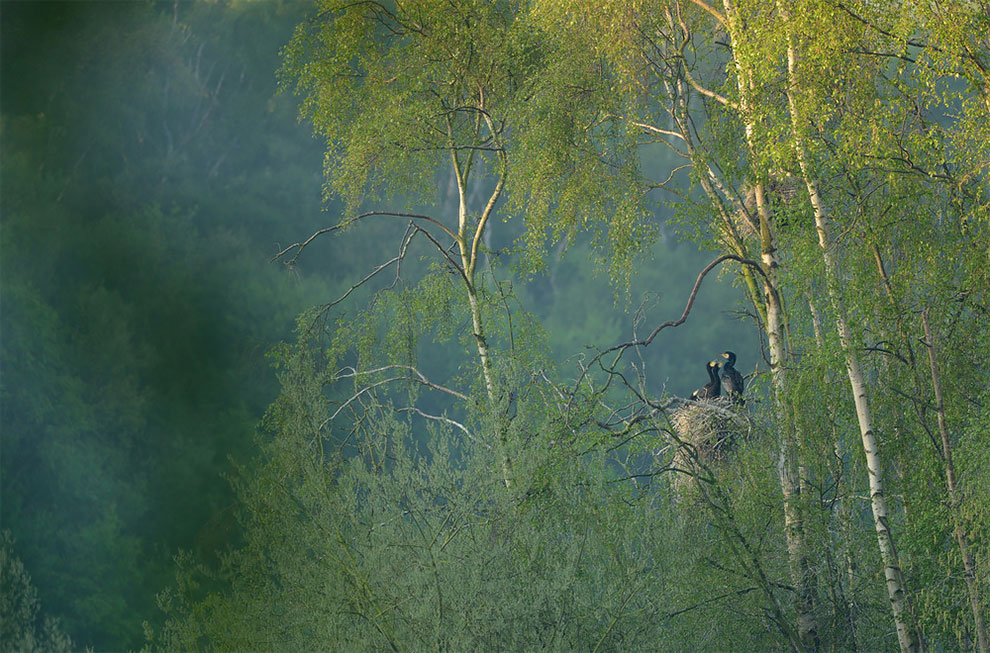 “As winter’s grip loosened and spring arrived, the eggs began to hatch. This image shows a nest containing three, begging their parent for the first meal of the day. At this time of year I had to be on site at 5am to capture the first rays of light hitting the nest. Often, as the morning wore on and the light grew more harsh, the chicks became less active and spent large amounts of time asleep in the nest”. (Photo by Ben Andrew/British Wildlife Photography Awards 2017) 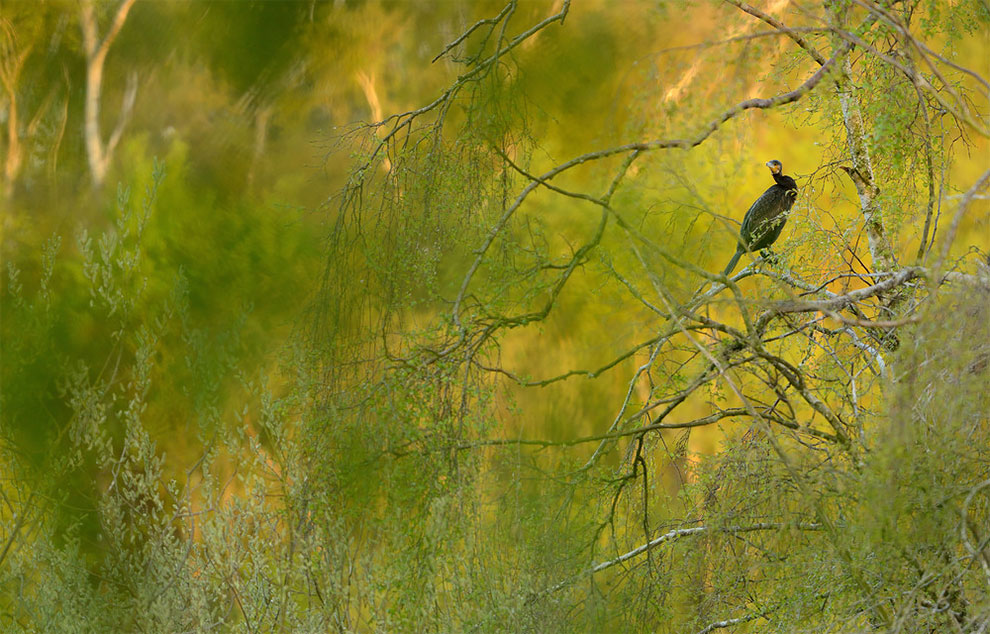 “Spring soon became summer and the chicks started to leave their nests, leaving the adults with time to rest and once again care for themselves. This image shows an adult bird perched in a lush, almost tropical world, although in reality the silver birch trees have simply sprouted plenty of leaves and the site has transformed into a green and yellow oasis. The noise has also died down as birds venture away; soon it will no longer be full of the busyness that it displayed over the past few months”. (Photo by Ben Andrew/British Wildlife Photography Awards 2017) 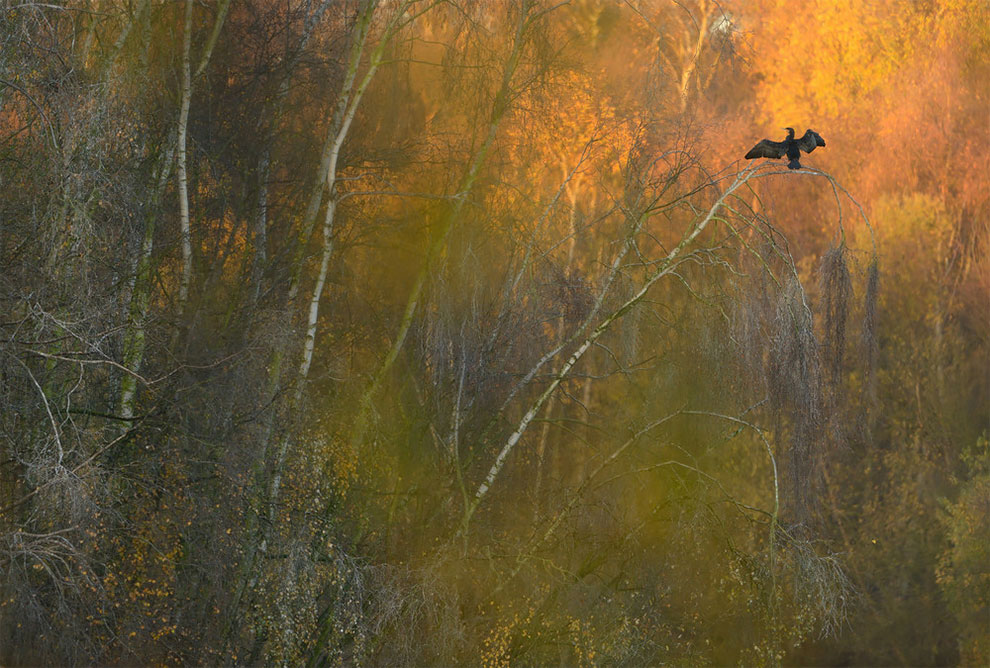 “Fast forward to autumn and the birds are still on site, using the trees as a safe place to roost each evening. I wasn’t entirely sure if they’d actually do this at this particular spot, but took a chance when I was visiting one morning. Luckily, a bird was there, drying its wings in the first rays of morning sunshine. The orange autumnal glow of the leaves being illuminated by the rising sun was incredibly fortuitous, but sometimes nature rewards you for repeat visits to the same spot”. (Photo by Ben Andrew/British Wildlife Photography Awards 2017)

Documentary series winner, Peter Cairns. Cairns shot a series of images of the translocation of red squirrels to forests in the north-west Scottish Highlands, where they have been absent for decades. 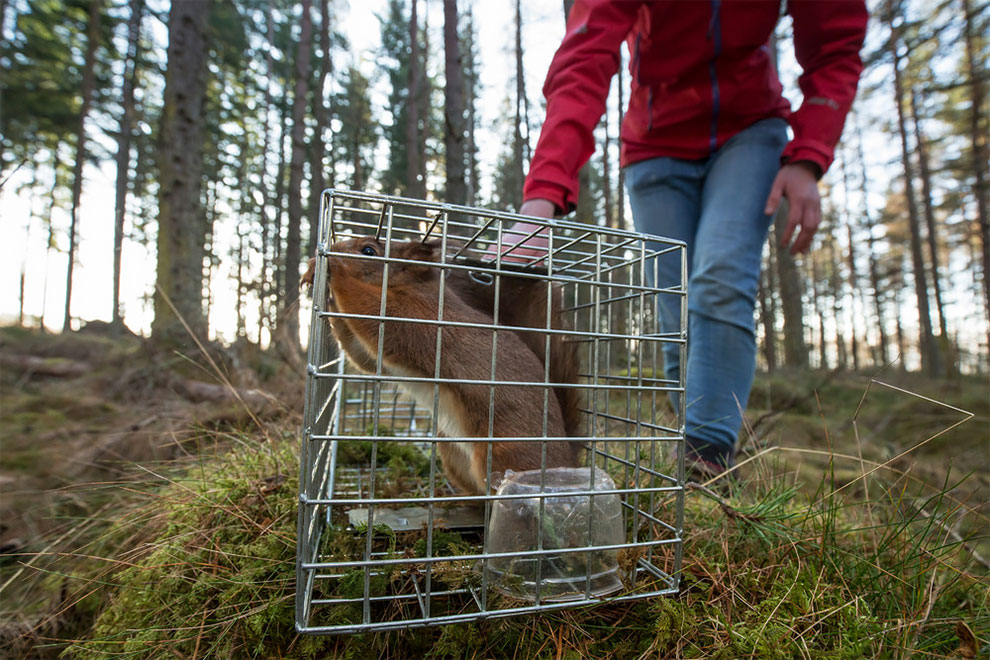 “On moving day the traps are set and checked within hours. Here a squirrel has been captured from a forest where they’re abundant”. (Photo by Peter Cairns/British Wildlife Photography Awards 2017) 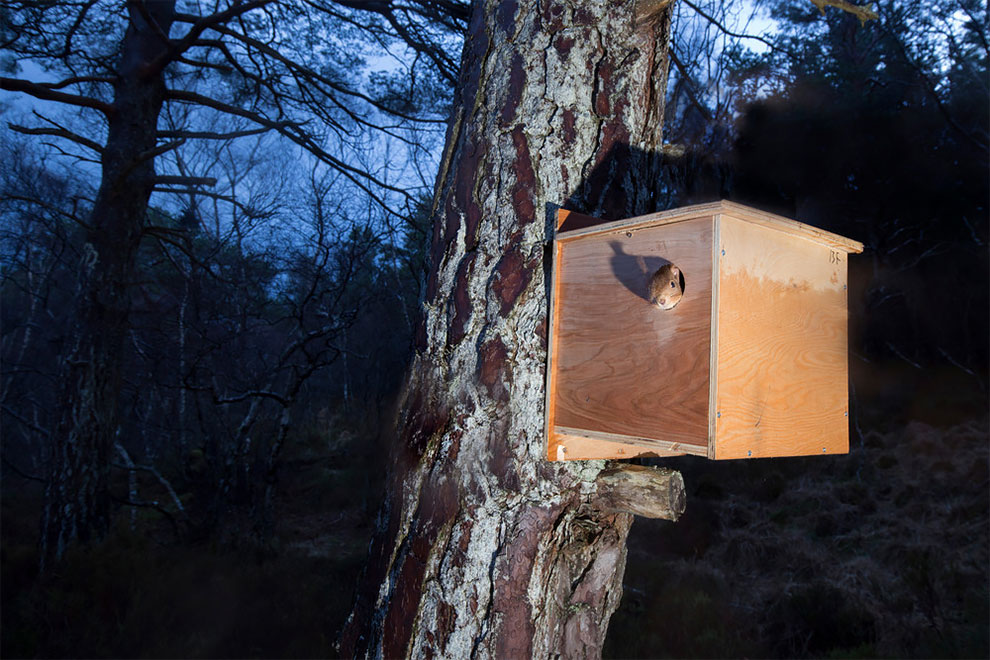 “Early the next morning, the urge to feed forces the squirrel out into its new woodland home in Shieldaig”. (Photo by Peter Cairns/British Wildlife Photography Awards 2017)

Hong Kong In The 1950s Captured By A Teenager
Wonderful Photos Capture The Beach Lives Of North Carolina In The Summer Of 1975
Magical Fine Art Portrait Photography By Shinji Watanabe
This Photographer Recreates The Famous Paintings By Gustav Klimt
The Red Lights Of Parisian Cafés: Dark And Gloomy Photos That Will Fill You With Trepedation
Stunning Photos Of The Victorian People-Watching At The Beach
An Extraordinary New Family of Spiders from Caves in the Pacific Northwest
Meet Georgina Burke, The Plus-Size Model Who's Changing The Game
"Geometric Variants", An Optical Illusion Photography Project By Erika Zolli
Incredible Photos Of Violinist Jascha Heifetz Playing In Darkened Studio As Light Attached To His Bow Traces The Bow Movement In 1952
Spectacular Winning Photographs from The World in Macro Contest 2020
Photographer Changes The Physical Appearance Of A Homeless Couple, And The Result Is Amazing
Cool Snaps That Show Bedroom Walls In The 1980s
Gorgeous Fine Art Portrait Photography By Alexandra Bochkareva
Magical Macro Worlds of Georgi Georgiev
Photographer Exposes The Truth Behind His 'Perfect' Photos
The Calvert Journal Have Announced the Finalists of The New East Photo Prize 2020
A Private Collection Of 19th Century Photographs Of Black Victorians
A French Photographer Finds Pink Magic In The Streets Of China
Beautiful Nordic Nature Through The Lens Of Photographer Roger Brendhagen
In Sand We Trust
Great Photos Of Mid-Century New York City By Frank Oscar Larson
Striking Black And White Photos Show The Brutal Lives Of Gun-Toting Depression Era Mobs In America
"Flower Power": The Superb Floral Photography and Collages by Ashley Marie
"Postcards From Google Earth": This Artist Finds Strange Beauty in Google’s Apocalyptic Glitches
London-Based Artist Thomas Duke Recreates Film Scenes Set In London And Beyond
A 15 Years Old Boy From India Creates Surreal Photoworks
New Wave Downtown Fashion by Edo Bertoglio
Rainy Saint Petersburg In Photographic Artworks By Eduard Gordeev
Photographer Challenges Herself To Shoot In ‘Ugly’ Location, And Results Prove That It’s All About The Skill
awards, british, photography, stunning, wildlife, winners