Marilyn Monroe Hanging Out in a Pumpkin Patch, 1945 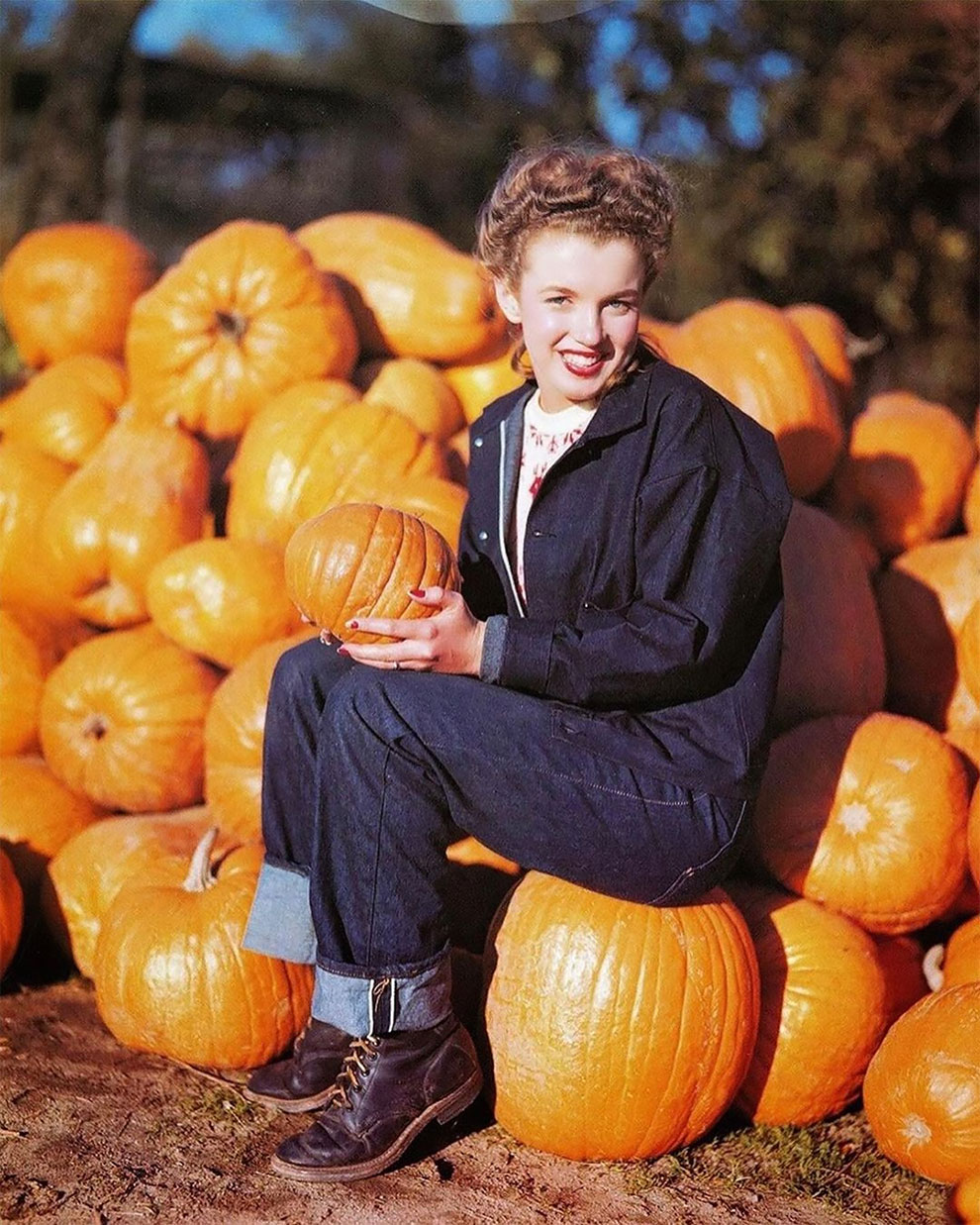 In 1945, fashion photographer Andre de Dienes developed a relationship with an aspiring young model named Norma Jean Dougherty resulting in a brief engagement and a huge portfolio of stunning photographs which helped to launch her career as Marilyn Monroe. 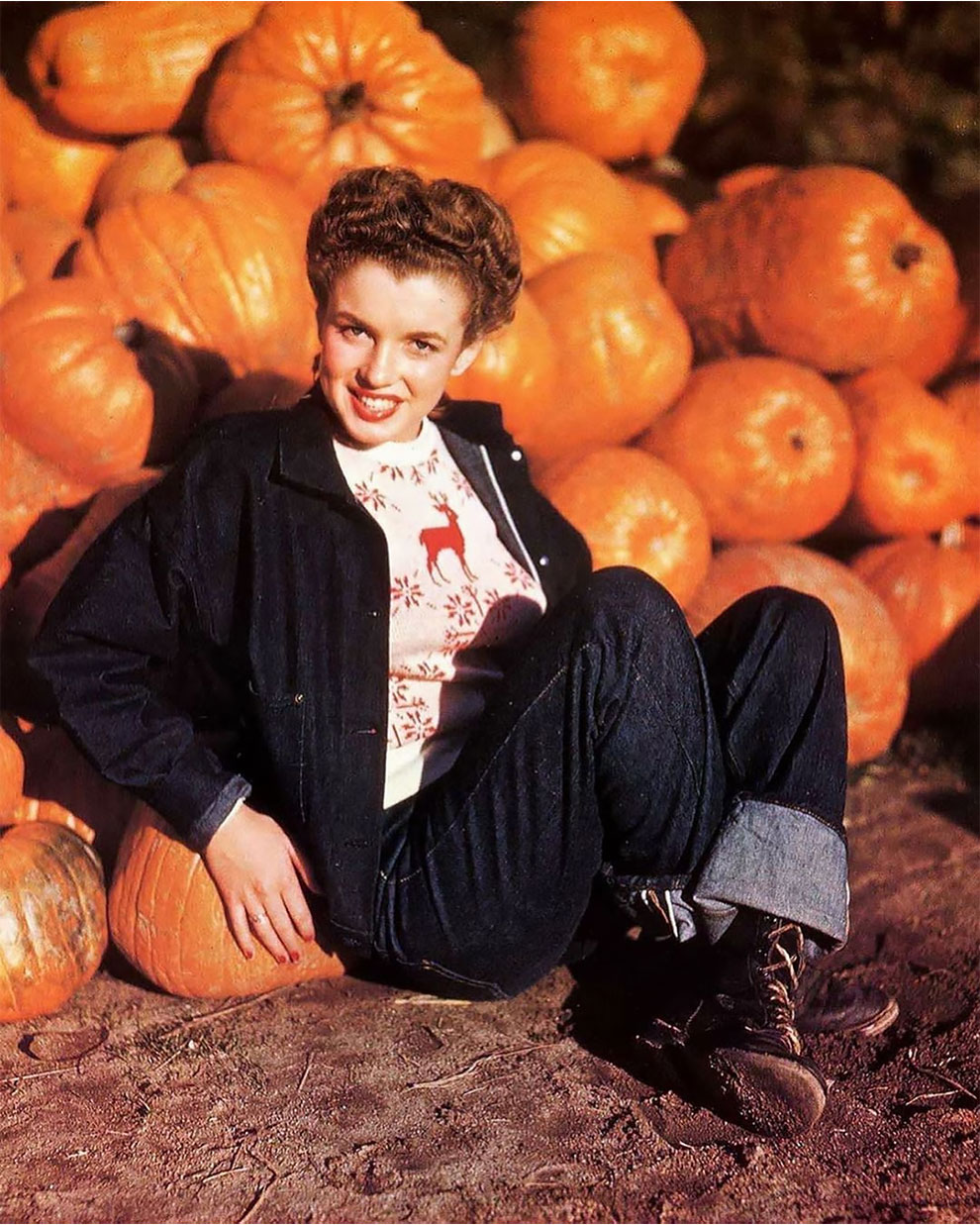 Taken in October 1945, the original blonde bombshell is barely recognizable at a first glance. Her chestnut curls are pinned back from her youthful features, and her famous physique is concealed beneath a denim suit, woolly Christmas jumper and work boots as she poses with the pumpkins. At just 19, going by the name Norma Jean Baker, the photographs were taken as part of Monroe’s first modeling portfolio by photographer Andre de Dienes. 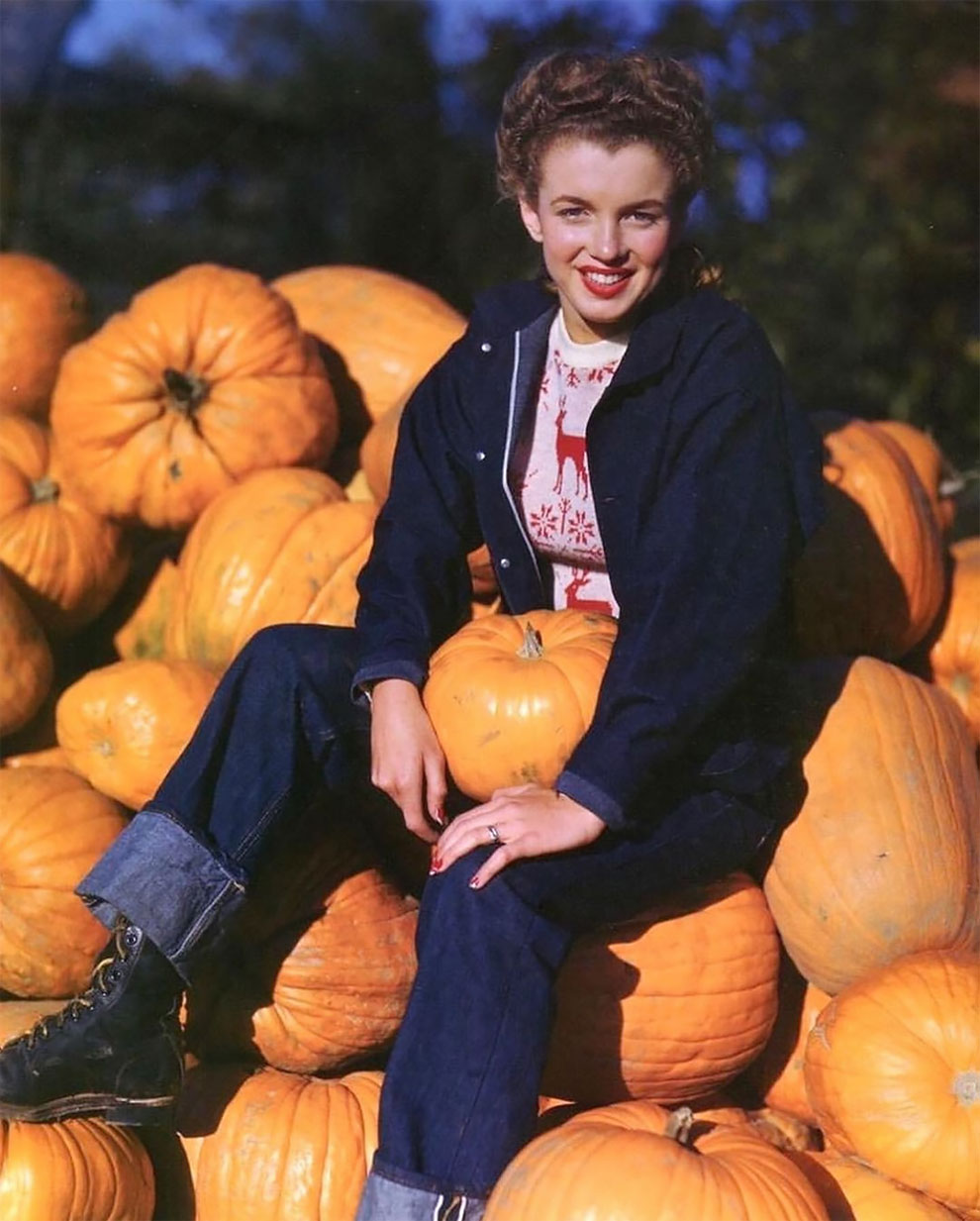 Dienes was clearly smitten with Monroe – when describing his first meeting with the future star he reminisced that it was “as if a miracle had happened” and that she “seemed to be like an angel.” He was later responsible for taking some of the most iconic images of the actress in her lifetime. 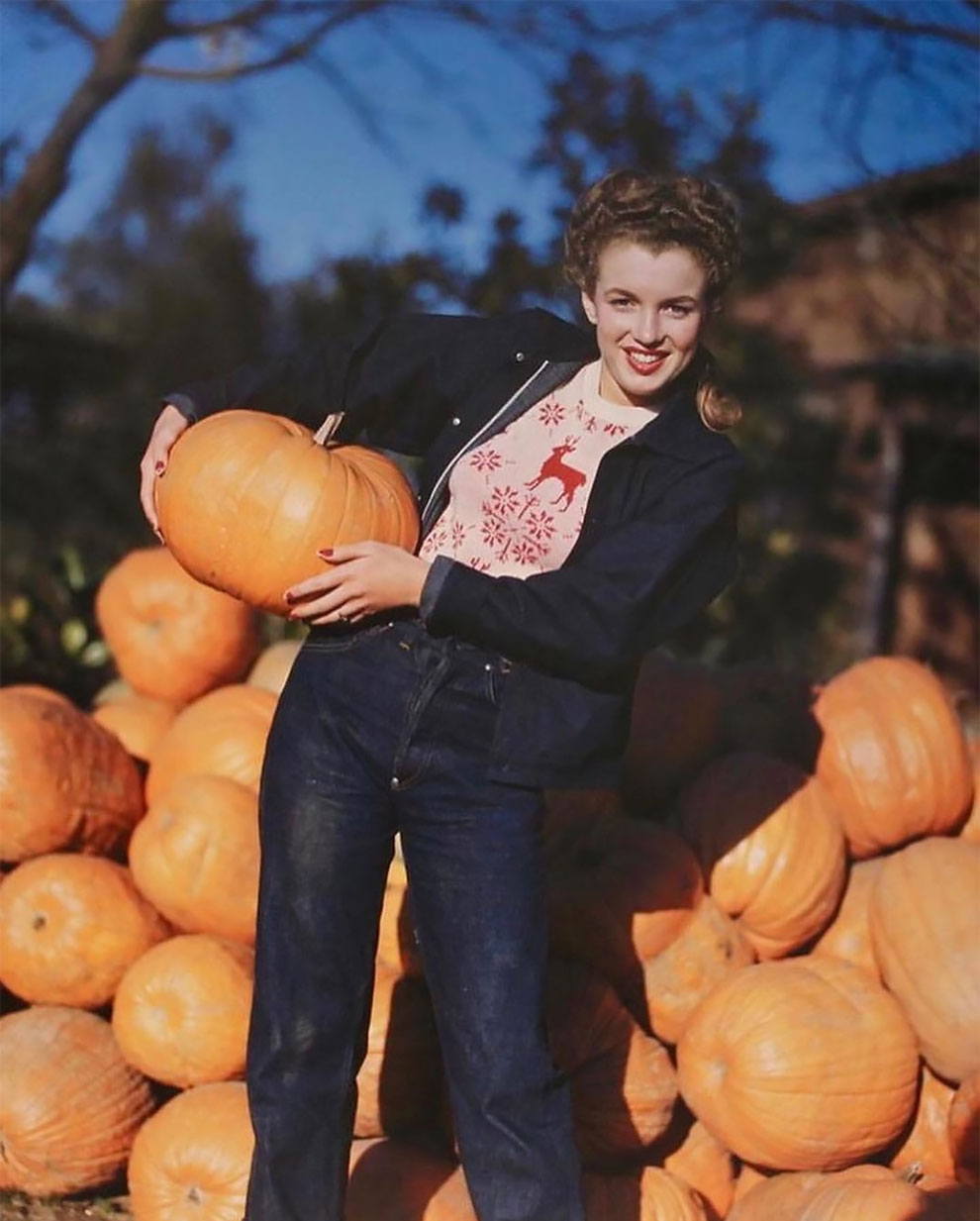 Theses photographs however, provide a different – although not exactly scary – portrayal of Marilyn for Halloween. Fresh faced and happy, they capture the star in her element, before the arrival of fame, fortune and her tragic demise. 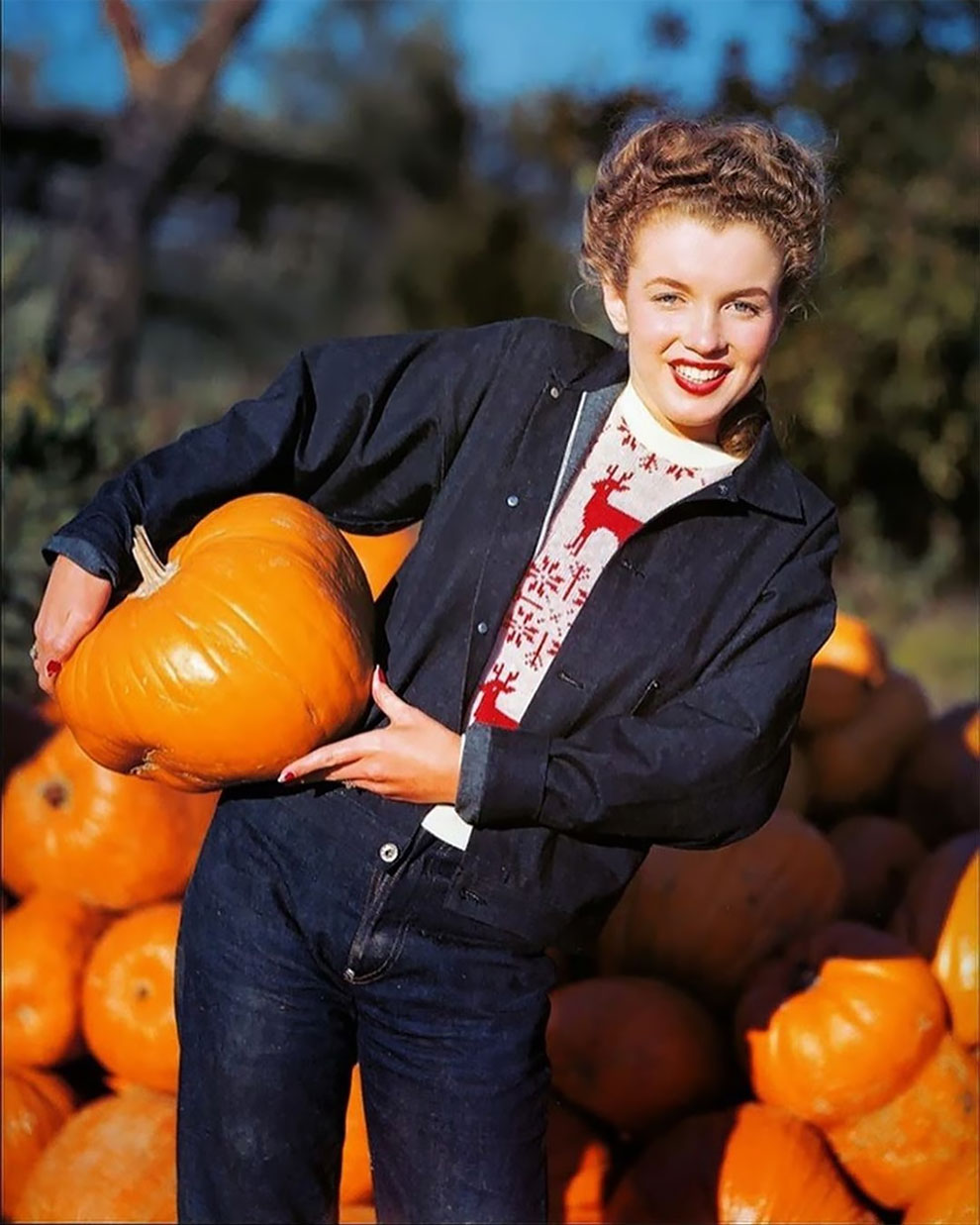 Finalists of Miss Helsinki 2012
Katy Perry as Elizabeth Taylor
A Completely Fascinating Collection Of Historical Photos
Street Portraits of Strangers
17 Vintage Photos From The Public Archives To Give You A Different Perspective
Sisters Of The Valley: Fascinating Portraits Of Nuns Who Grow Marijuana
The Superb Black And White Abstract Beauty And Street Photo Artworks By Olivier Mayhall
Packing for Holidays
Thatcher Says: Depressive Photos of Liverpool in the 1980s
Finalists and Winners of The Head On Portrait Award 2021
18 Photos Which Show Life From A Different Perspective
National Geographic Unveils Its 50 Most Beautiful Travel Photos Of 2016’s
The Majesty Of The Animal Kingdom in Amazing Photographs by Simen Johan
National Geographic's “Women of Vision” - A New Generation of Female Photojournalists
Photographer Vadim Stein Captures Mindblowing Images Of Dancers
Under the Lens: Atmospheric and Conceptual Photo Works by Elle Hanley
Extreme X-Rays: Photographer Nick Veasey Takes You Inside The Insects
The World’s Largest Photography Competition Announced 100 Finalists From Over A Million Entries And Here’s 30 Of Them
I Must Be Dead
The National Geographic’s Travel Photo Contest Is Over And Here Are The Winners
Lavazza 2020 Calendar By David LaChapelle
Magical Photos Of China Taken By The US Photographer Tristan Zhou
Color Portraits Of Immigrants At Ellis Island
Photographer Took 12 Pics Of Regular Chinese People To Stop Prejudice And Show That They’re Like All Of Us
1940s, halloween, Marilyn Monroe, retro