Three days before plunging into Saturn’s sunny side, the robotic Cassini spacecraft swooped far behind Saturn’s night side with cameras blazing. Thirty-six of these images have been merged — by an alert and adept citizen scientist — into a last full-ring portrait of Cassini’s home planet for the past 13 years. The Sun is just above the frame, causing Saturn to cast a dark shadow onto its enormous rings. This shadow position cannot be imaged from Earth and will not be visible again until another Earth-launched spaceship visits the ringed giant. 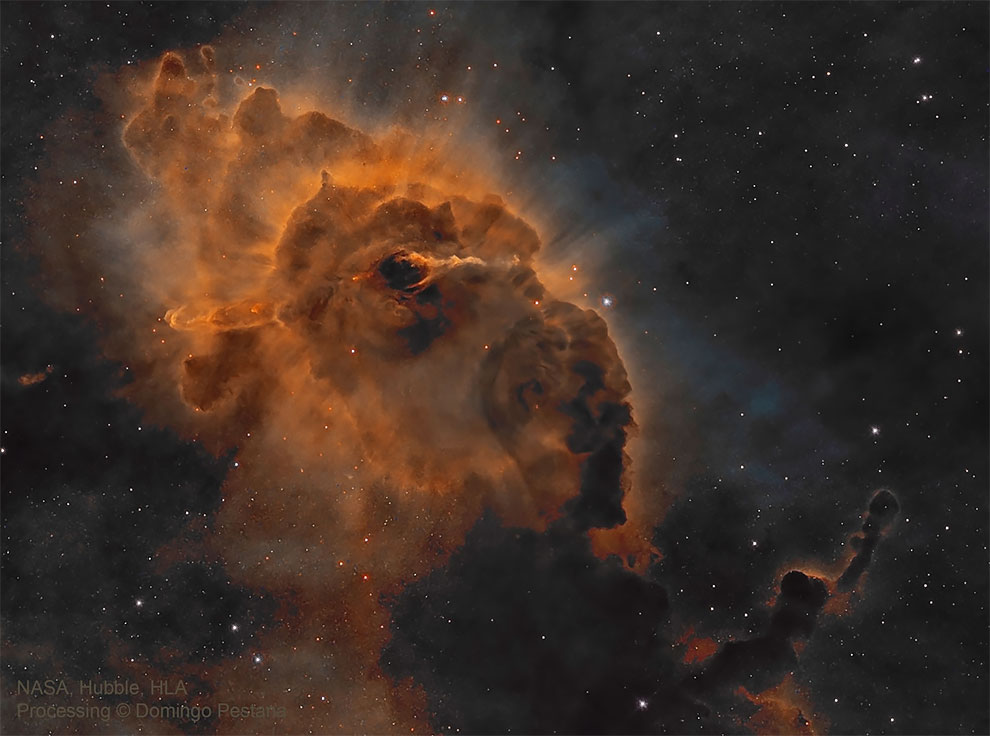 To some, Carina Dust Pillar may look like a beehive harbouring an evil bee. In reality, the featured Hubble image captures a cosmic pillar of dust, two light years long, inside of which is Herbig-Haro 666 — a young star emitting powerful jets. The structure lies within one of our galaxy’s largest star forming regions, the Carina Nebula, shining in southern skies at a distance of about 7,500 light years. 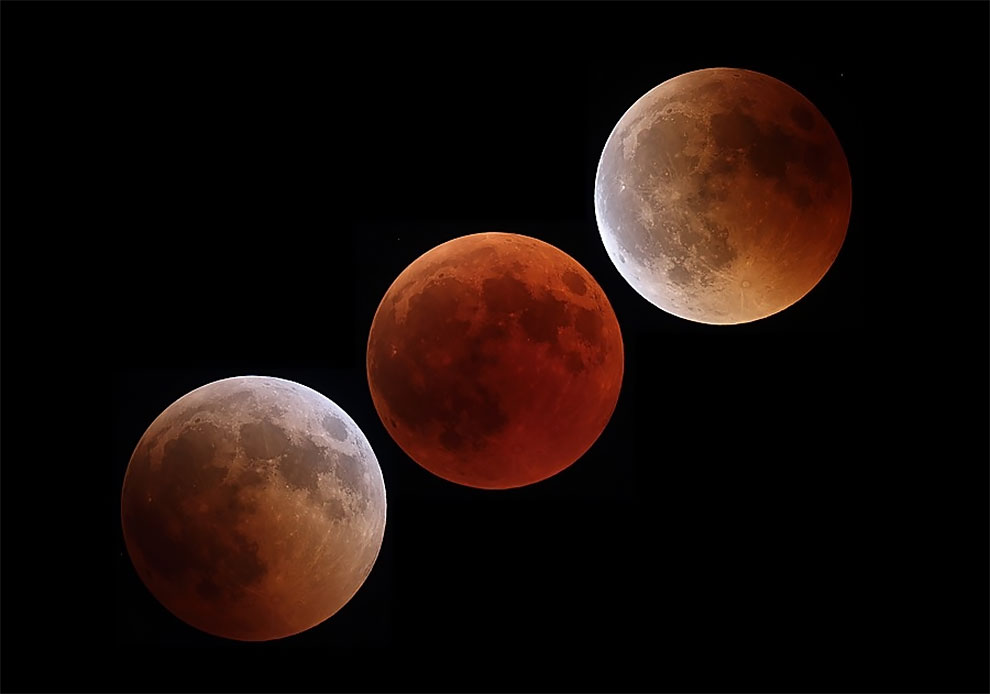 The Moon in the centre is passing through the centre of Earth’s dark umbral shadow in this July 2018 lunar eclipse sequence. Left to right the three images are from the start, maximum, and end to 103 minutes of totality from the longest lunar eclipse of the 21st century. The longest path the Moon can follow through Earth’s shadow does cross the shadow’s centre, that’s what makes such central lunar eclipses long ones. 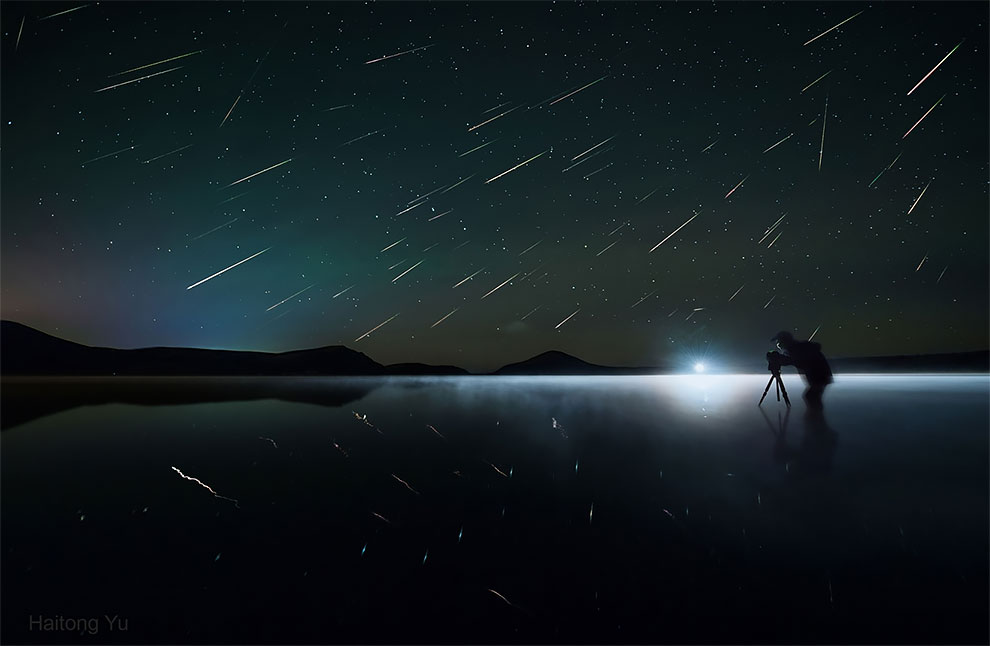 In 2018, about 90 Perseids rained down above Lake Duolun of Inner Mongolia, China. 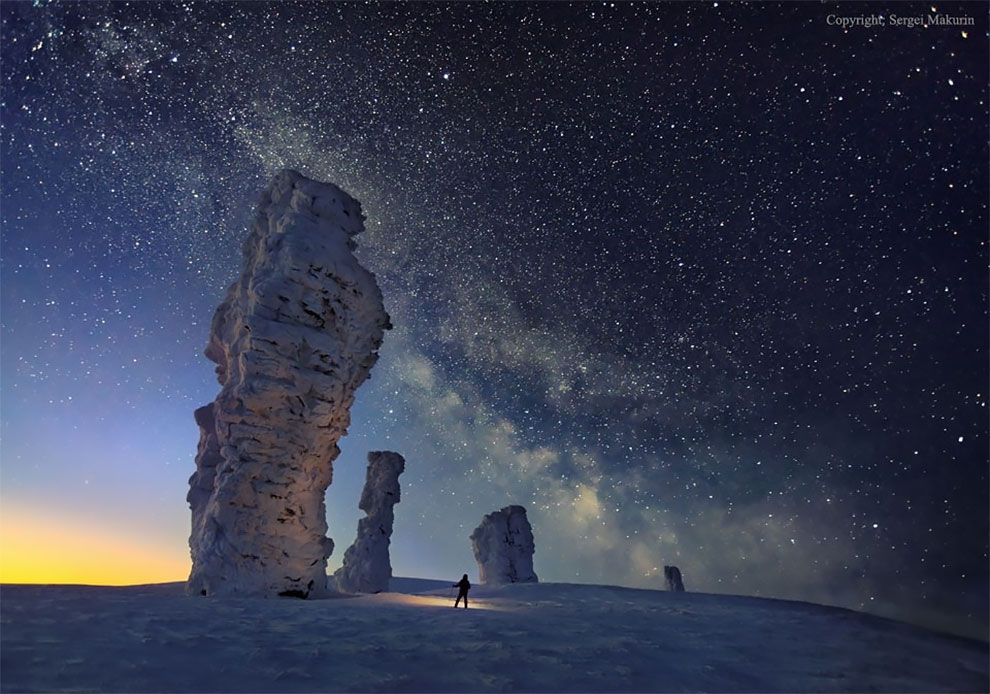 Located just west of the Ural Mountains, the unusual Manpupuner rock formations are one of the seven wonders of Russia. Utilising the camera’s time delay feature, a photographer holds a flashlight in the foreground near one of the snow-covered pillars. High above, millions of stars shine down, while the band of our Milky Way Galaxy crosses diagonally down from the upper left. 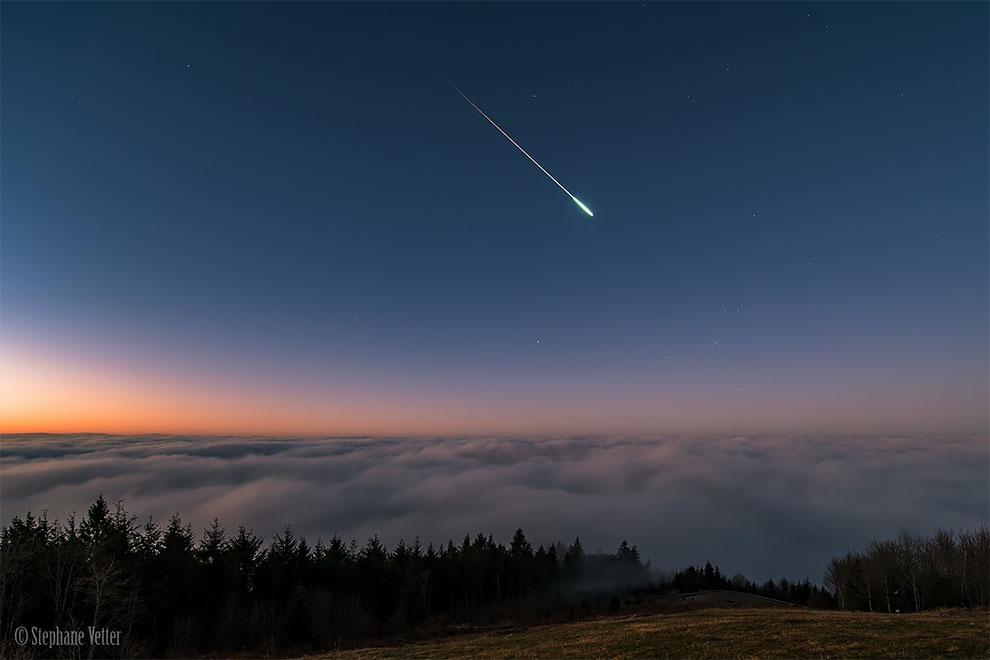 In November 2018, just an hour before sunrise, this bright meteor flashed through clear predawn skies. Above a sea of clouds this striking autumn morning’s moment was captured from Hochblauen, a summit in southern Germany’s Black Forest. 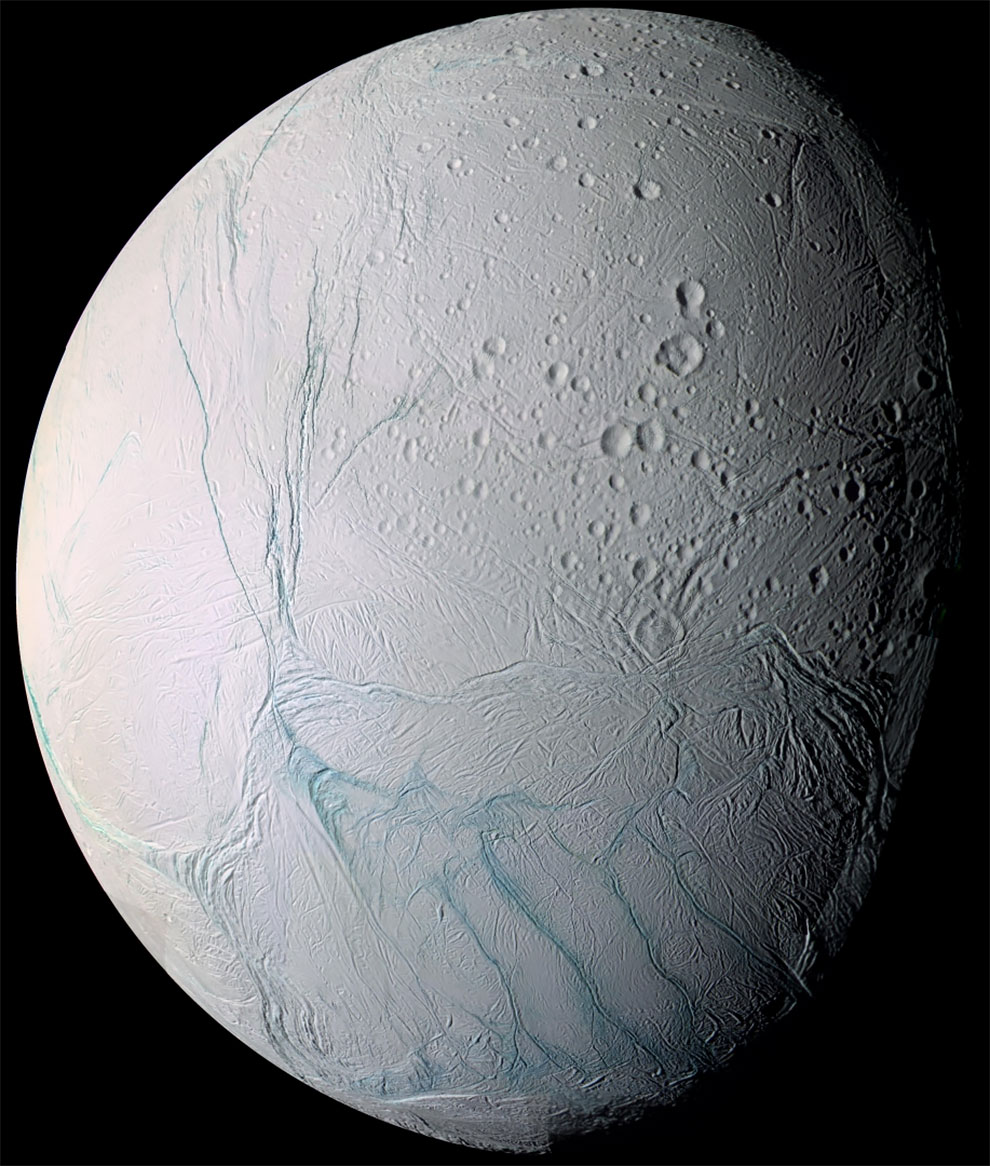 The tiger stripes on Saturn’s moon Enceladus might be active. Even today, they may be spewing ice from the moon’s icy interior into space, creating a cloud of fine ice particles over the moon’s South Pole and creating Saturn’s mysterious E-ring. 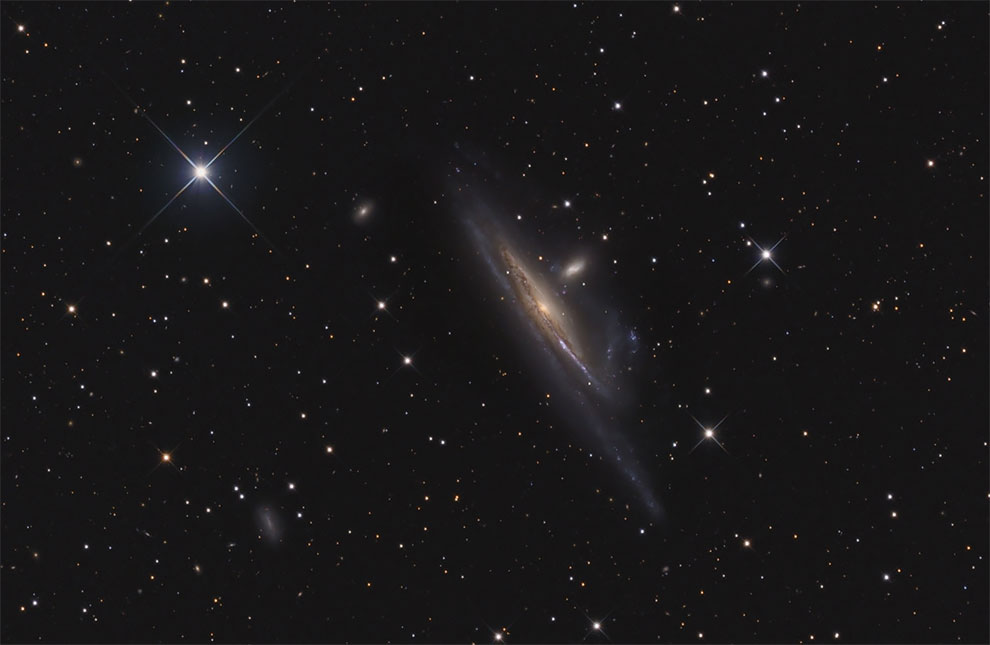 Even our own galaxy practices galactic cannibalism, absorbing small galaxies that get too close and are captured by the Milky Way’s gravity. In fact, the practice is common in the universe and illustrated by this striking pair of interacting galaxies from the banks of the southern constellation Eridanus, The River. 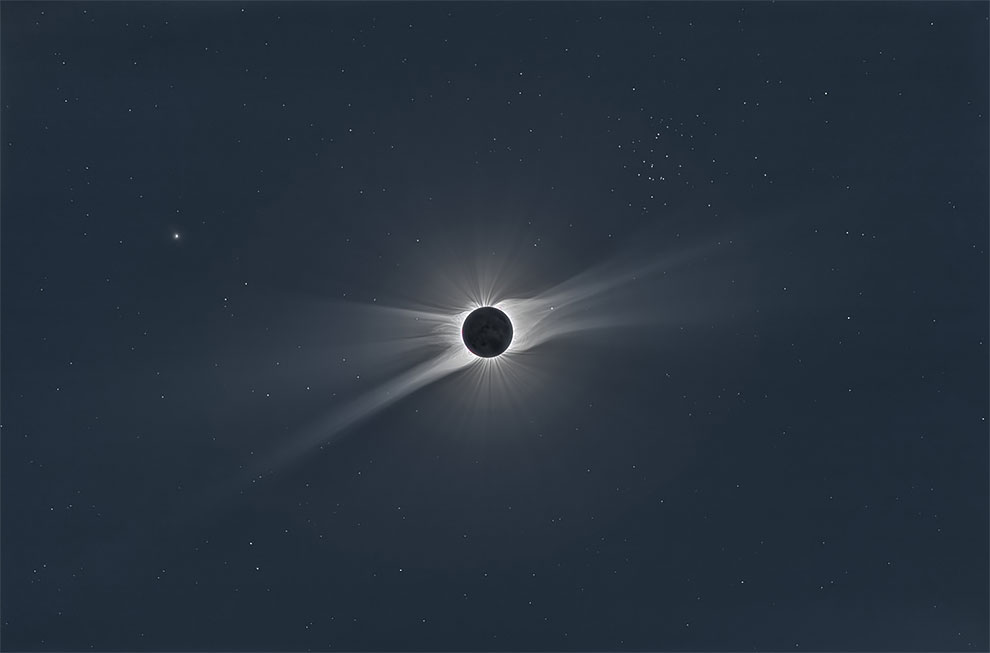 For a moment in August 2018, the daytime sky grew dark along the path of a total solar eclipse. While watching the geocentric celestial event from Mongolia, photographer Miloslav Druckmuller recorded multiple images with two separate cameras as the Moon blocked the bright solar disk and darkened the sky. On the left is bright planet Mercury, but many stars are also visible, including the Praesepe star cluster in Cancer, above and to the right of the silhouetted Moon. 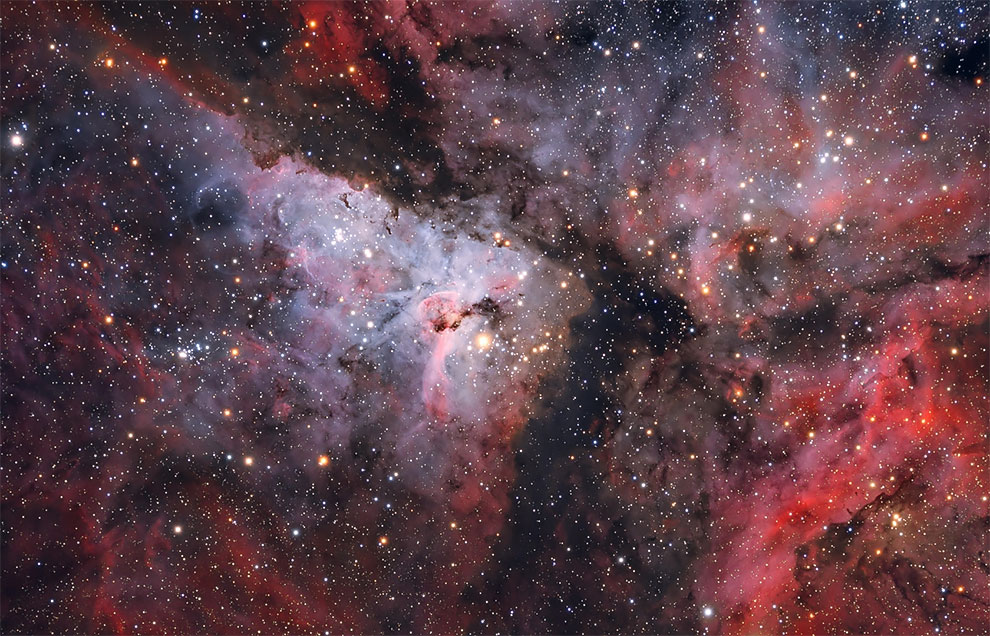 The Great Carina Nebula, also known as NGC 3372, spans over 300 light years, one of our galaxy’s largest star forming regions. 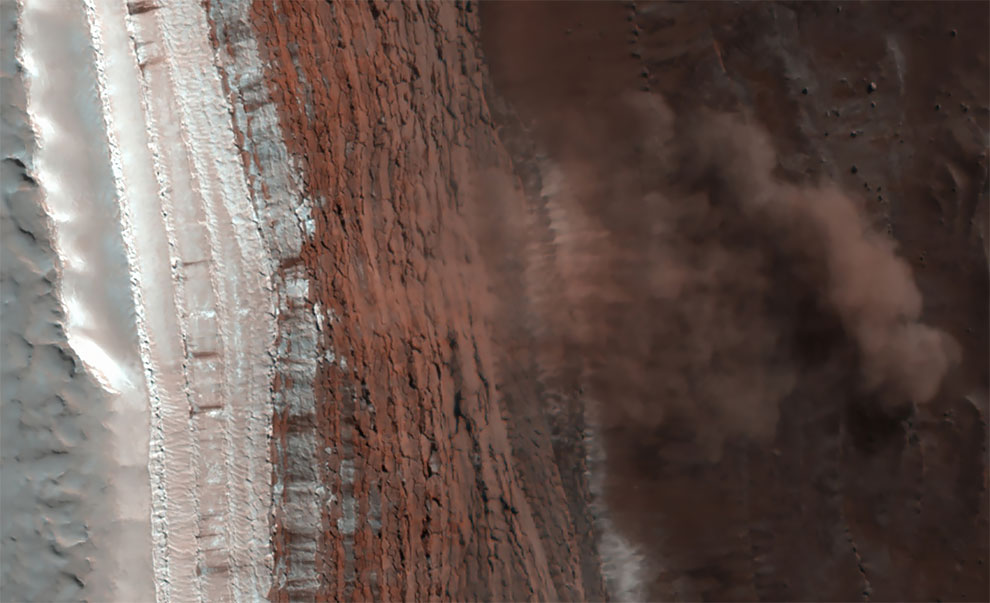 The first avalanche imaged in progress on another planet was recorded on Mars by NASA’s robotic Mars Reconnaissance Orbiter in 2018. 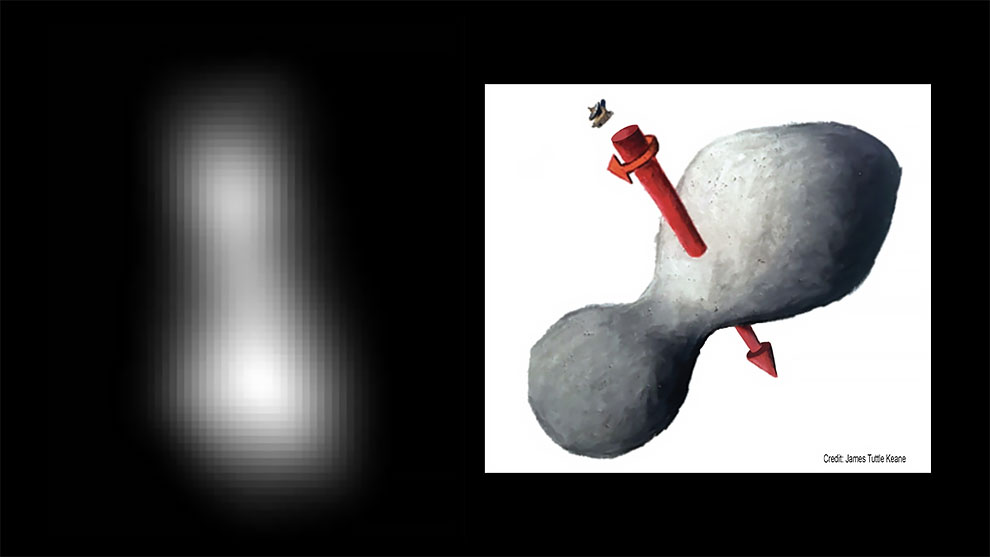 At left is a composite of two images taken by New Horizons’ high-resolution Long-Range Reconnaissance Imager (LORRI), which provides the best indication of Ultima Thule’s size and shape so far. Preliminary measurements of this Kuiper Belt object suggest it is approximately 32 kilometres by 16 kilometres wide. An artist’s impression at right illustrates one possible appearance of Ultima Thule, based on the actual image at left. The direction of Ultima’s spin axis is indicated by the arrows. Photo: NASA/JHUAPL/SwRI; sketch courtesy of James Tuttle Keane.