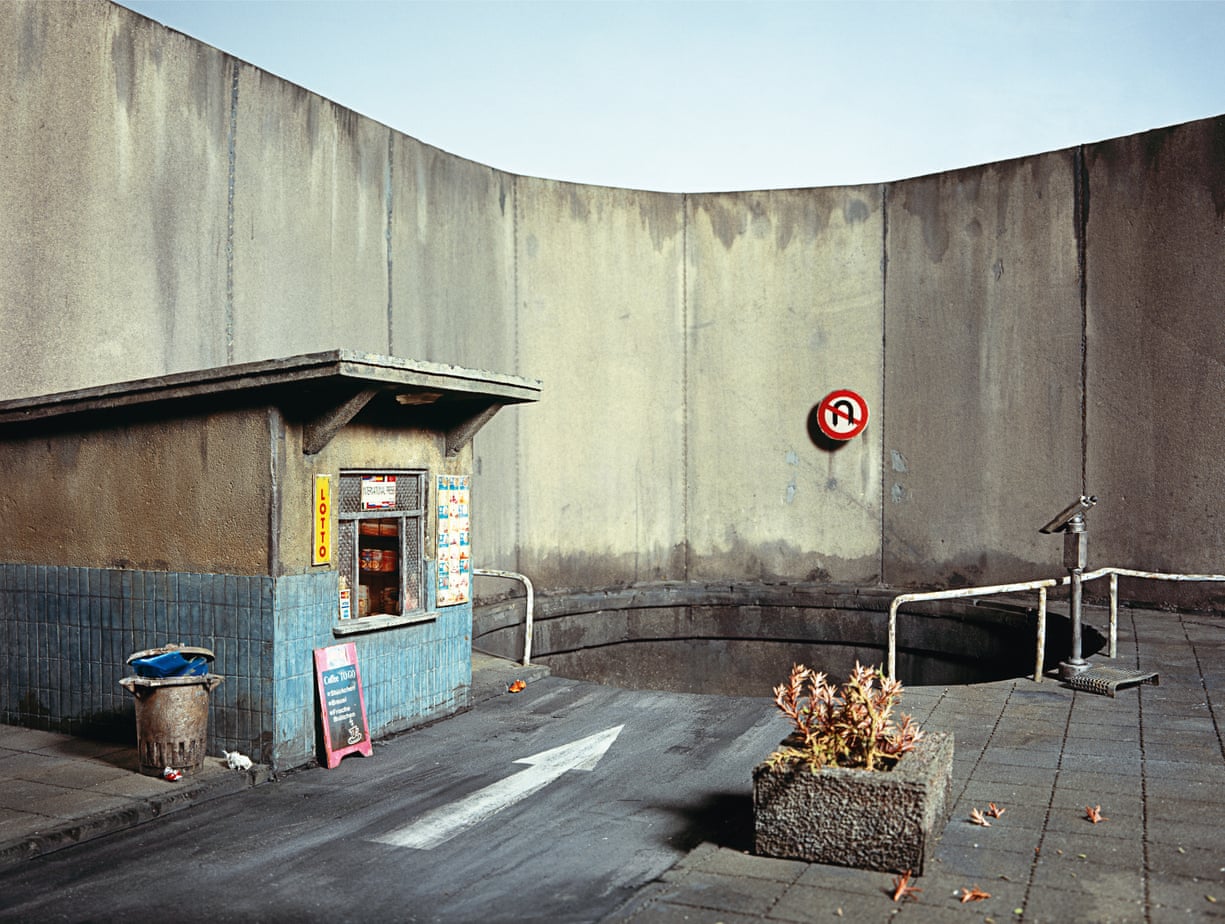 Working slowing, consciously perceiving, precisely observing; in our increasingly fast-paced and abstract world, this type of working method seems to be more and more rare. Still, we know that the exception proves the rule. If Frank Kunert (*1963 in Frankfurt am Main) did not have the patience and calm he exhibits in creating his miniature, stage settings—immortalized in photographs made with a large-format analog camera—his “small worlds” would lose the charm we’ve grown so fond of through his previous publications, Verkehrte Welt (Inverted world) and Wunderland. Here, the ordinary quickly reaches its limits and traverses beyond ad absurdum, while tragedy veers into comedy, and wit becomes debatable. Kunert’s works exist between the poles of grotesque and metaphysics. His new book, Lifestyle, adds twenty-four miniatures to these philosophically based stories of everyday life. 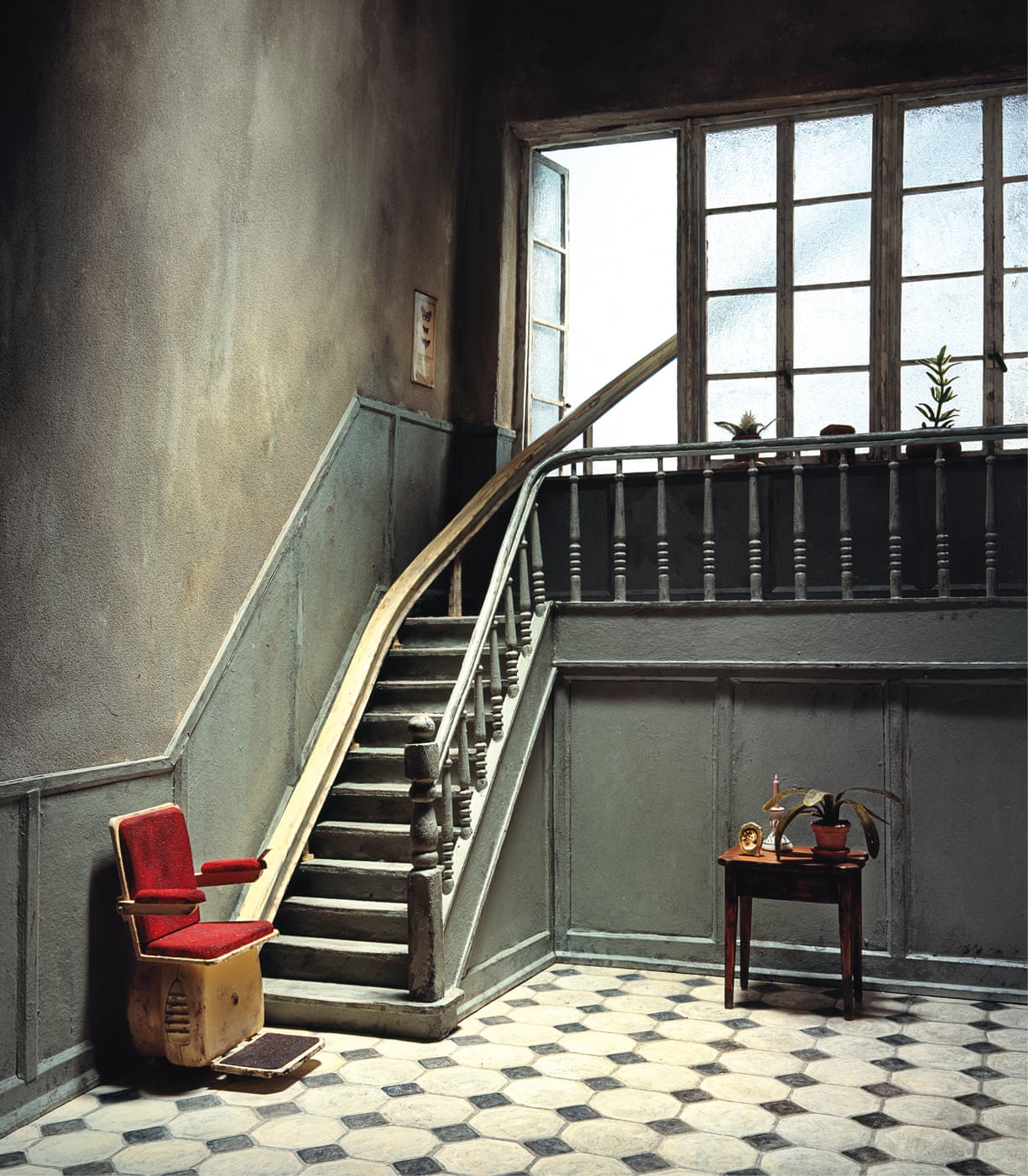 In Lifestyle, his third book, he deploys these intricate models to explore the absurdity of the mundane. Everyday domestic components – a staircase, a steering wheel, a Christmas tree – are reconfigured in surreal ways. 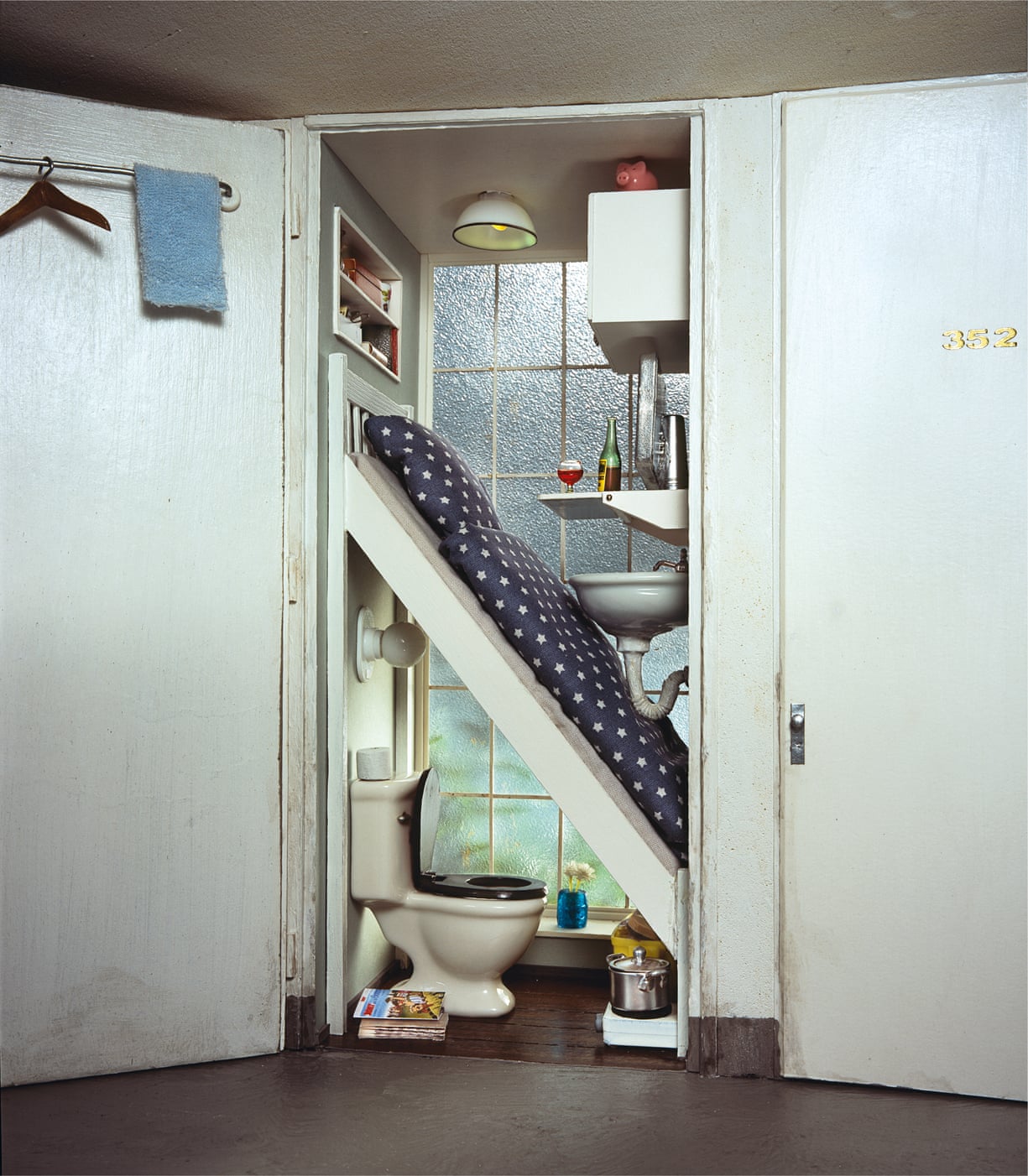 Here, all the basic mod cons of a standard studio apartment, from a toilet and sink to a TV and a single bed, are stacked like mismatched Tetris blocks in an unliveable matchbox-size living space 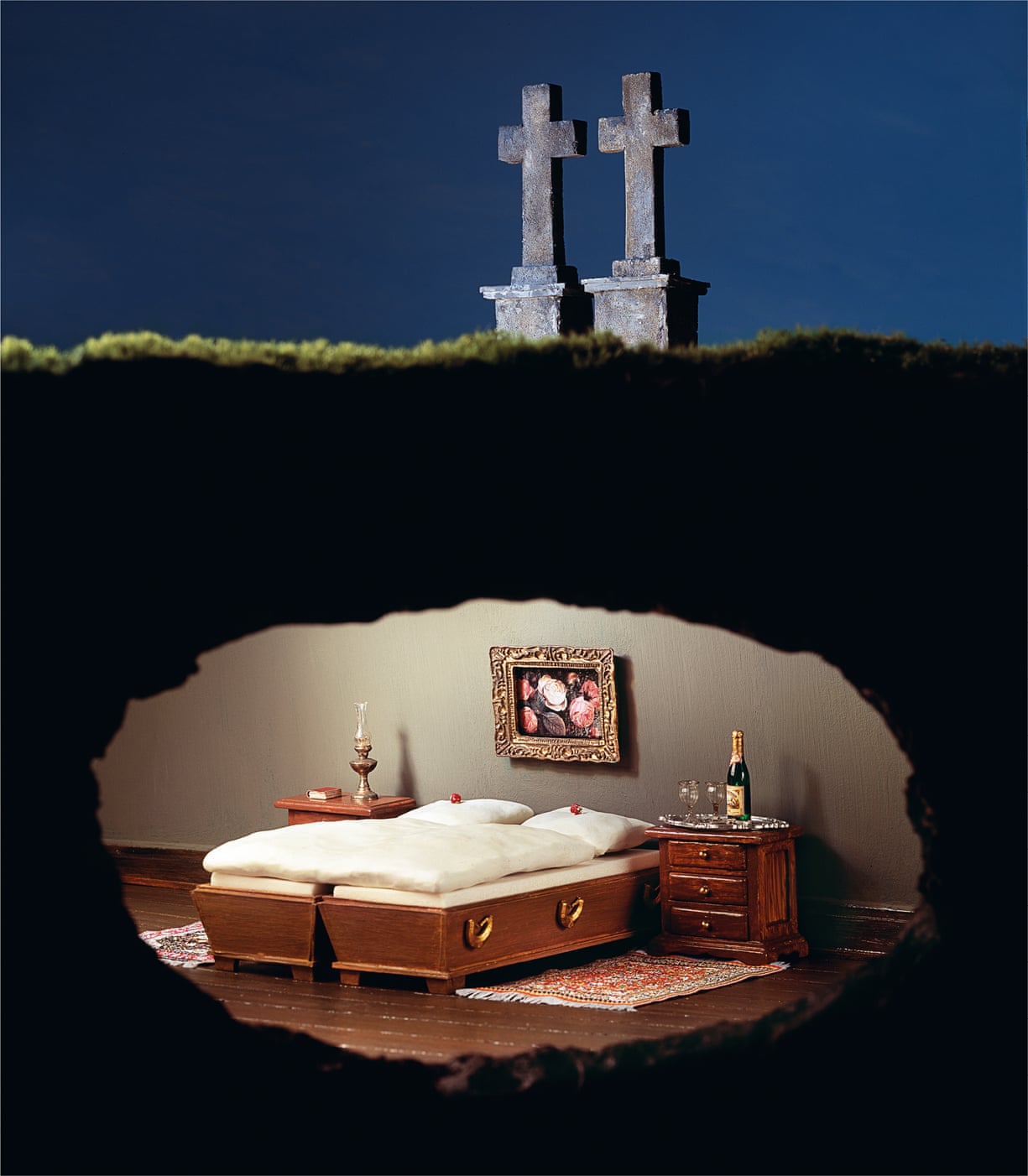 Kunert, a consummately analogue artist, uses lightweight foam board, modelling clay and paint to construct his models, then photographs them with a large-format film camera. 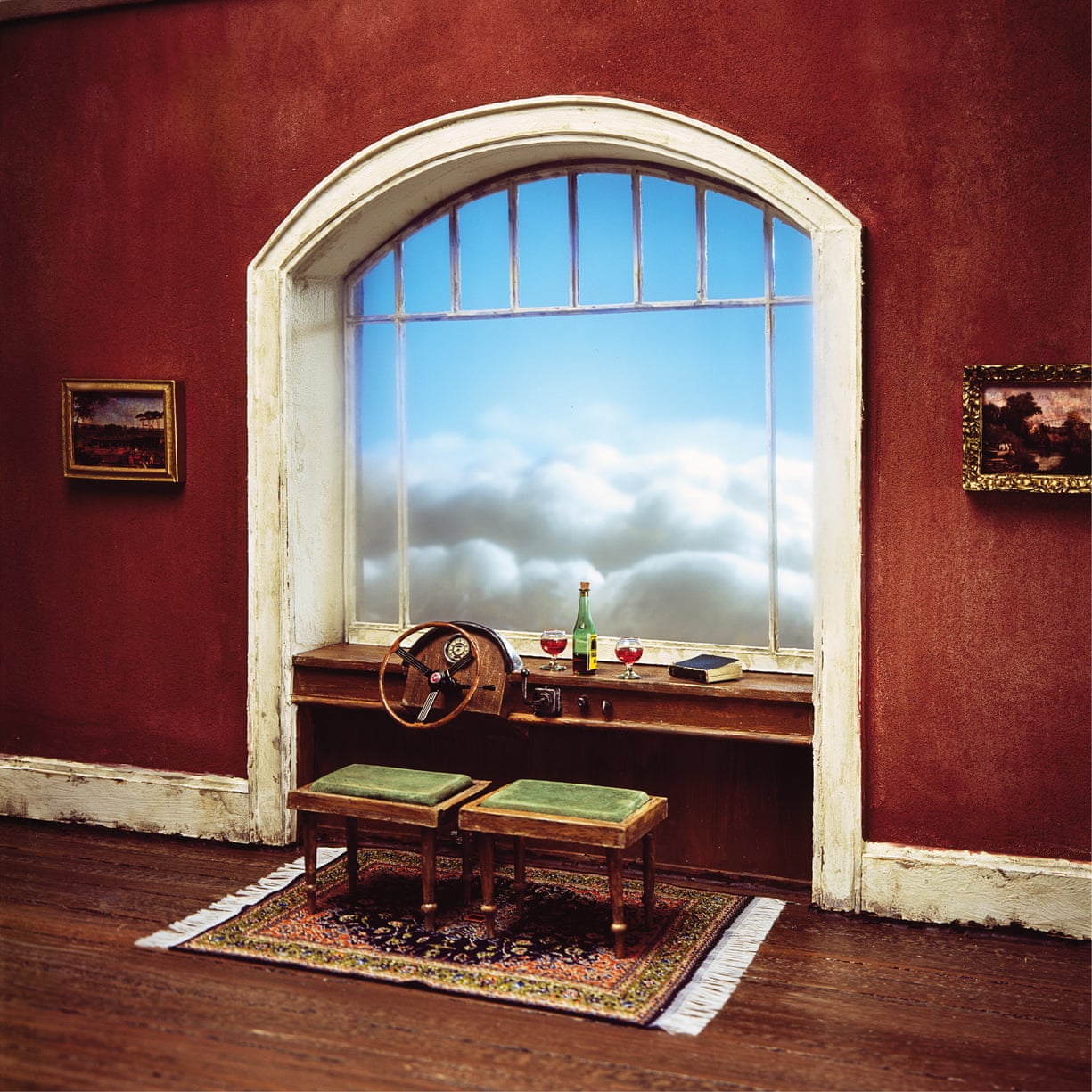 Travelling to faraway places from the comforts of one’s home is a recurring theme in Kunert’s work, be it the desk-turned-dashboard of this red-walled study… 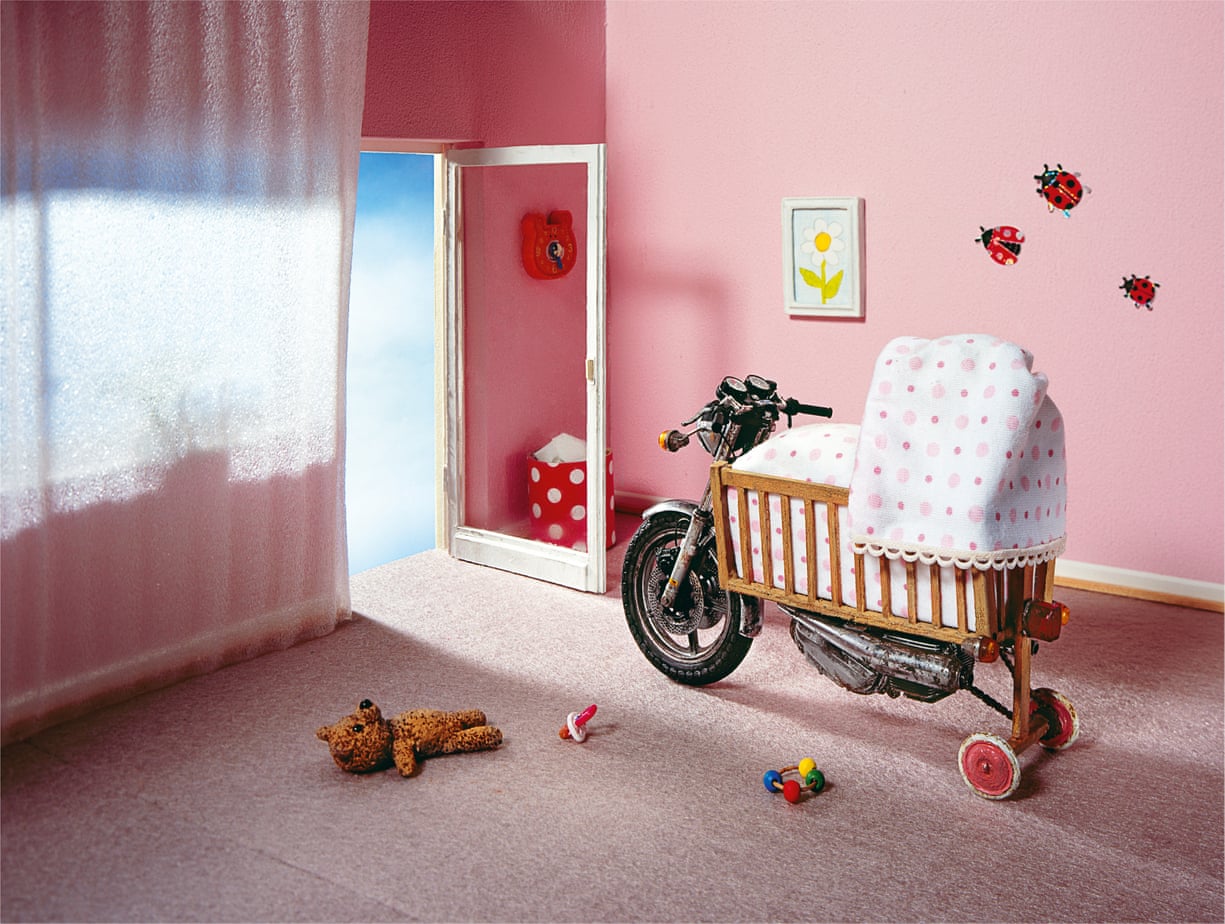 …or the crib mounted on a motorbike in this child’s pink nursery. 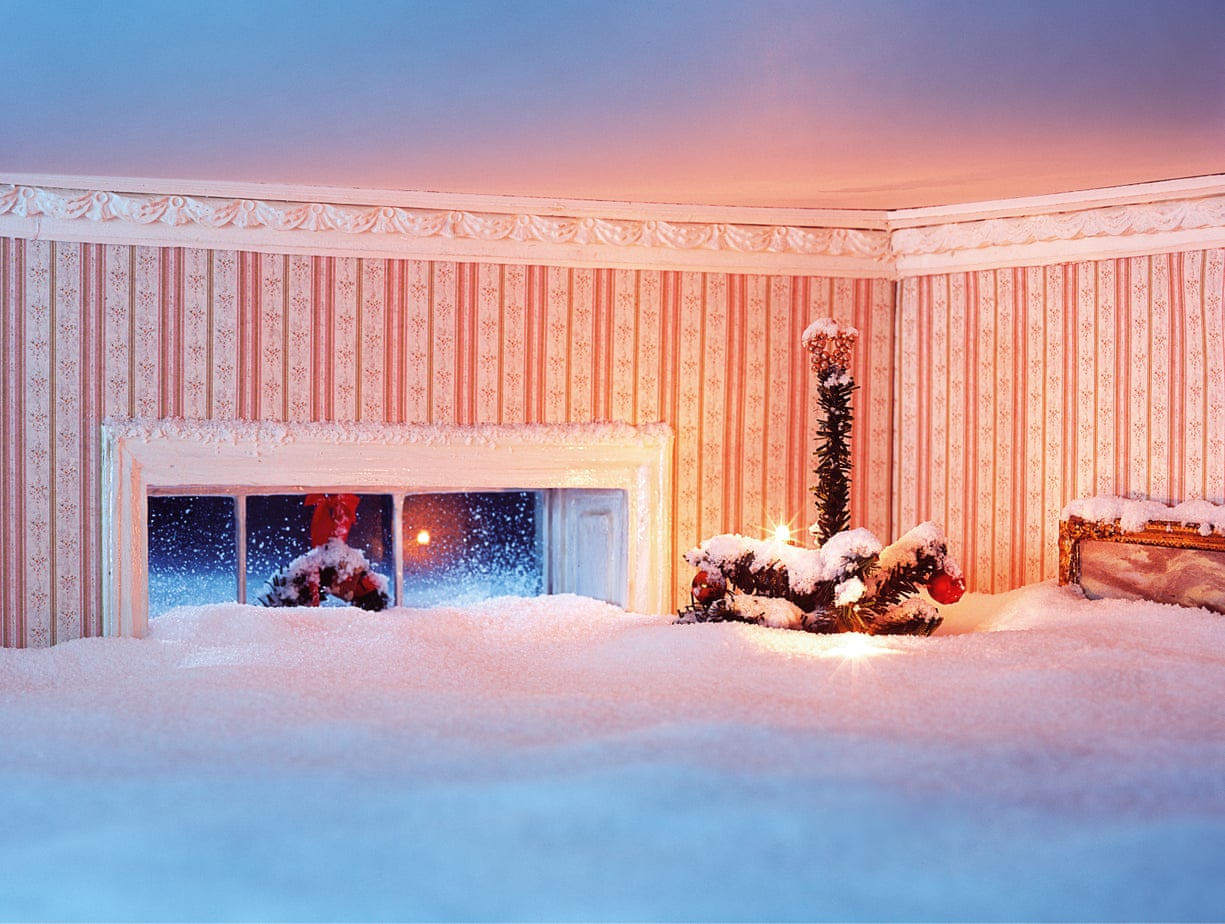 Kunert talks of his make-believe worlds as projection screens. The absence of protagonists is what makes them so accessible to anyone looking in: you can make of these worlds what you will. 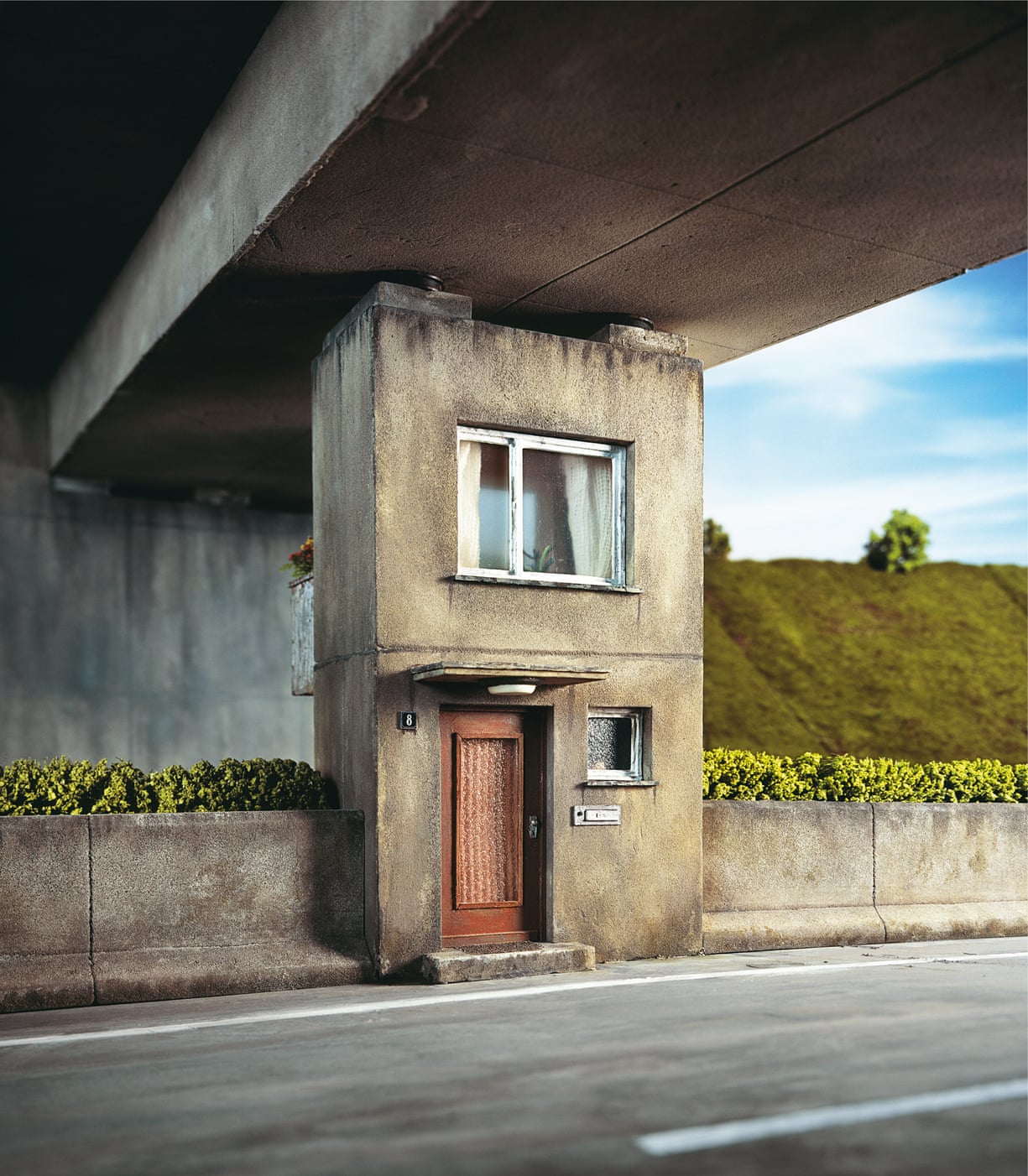 In his introduction to the book, art historian Jörg Restorff notes the pleasure Kunert takes in juxtaposing – or indeed enmeshing – impossible pairings. 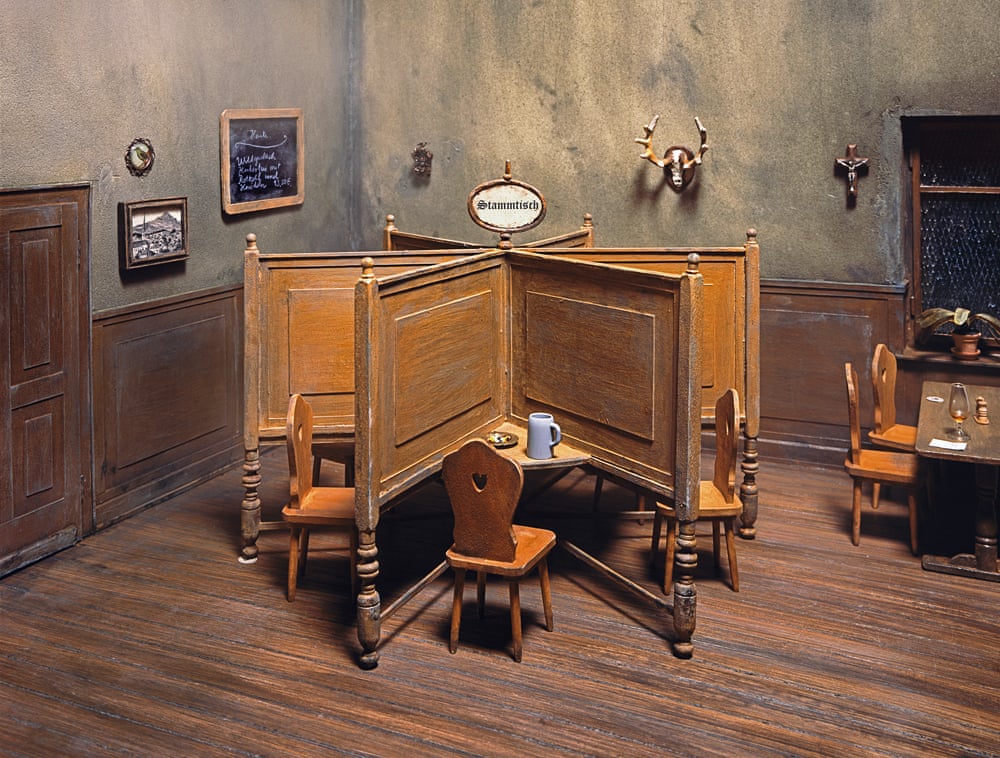 A Stammtisch is both a friendly get-together and the large, circular table one might gather around to have one. The Stammtisch depicted in this image is decidedly neither. 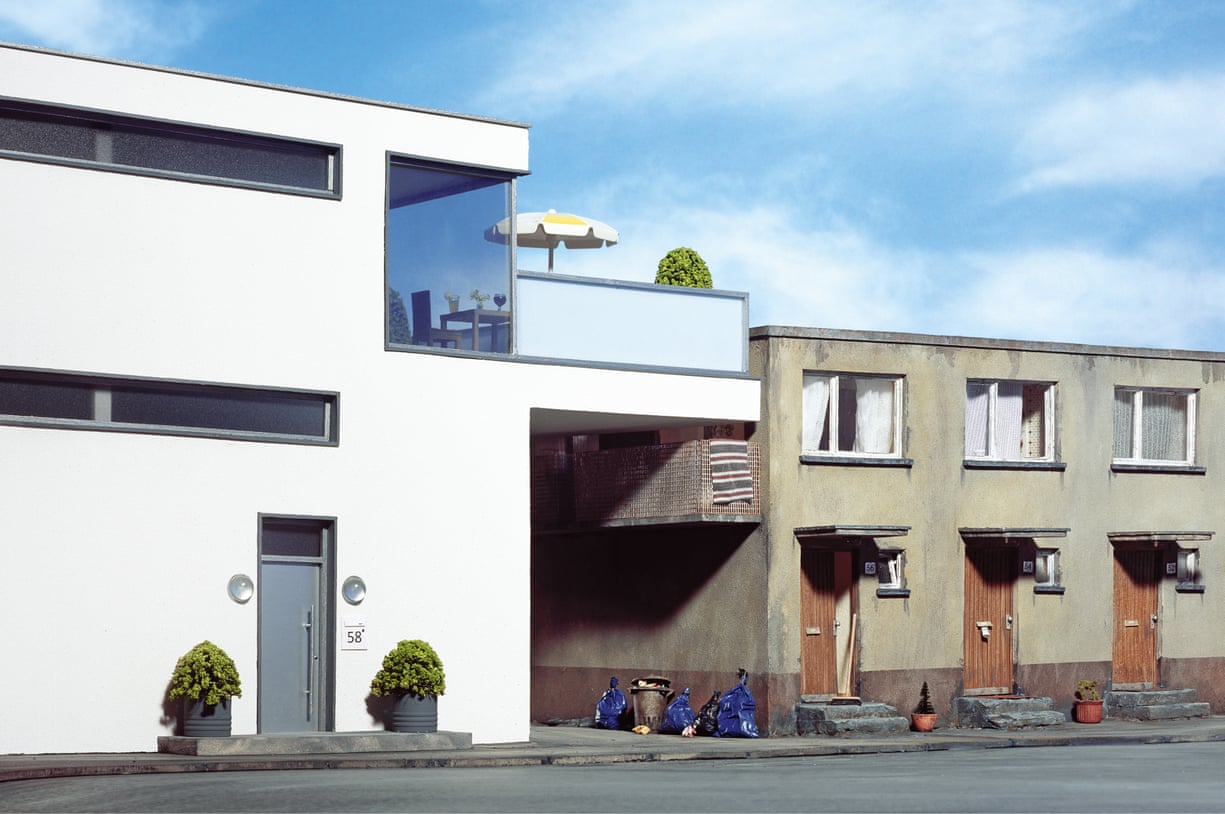 Here the wildly protruding balcony of a new-build crowds out the dilapidated house next door, rendering its own lacklustre balcony unusable. 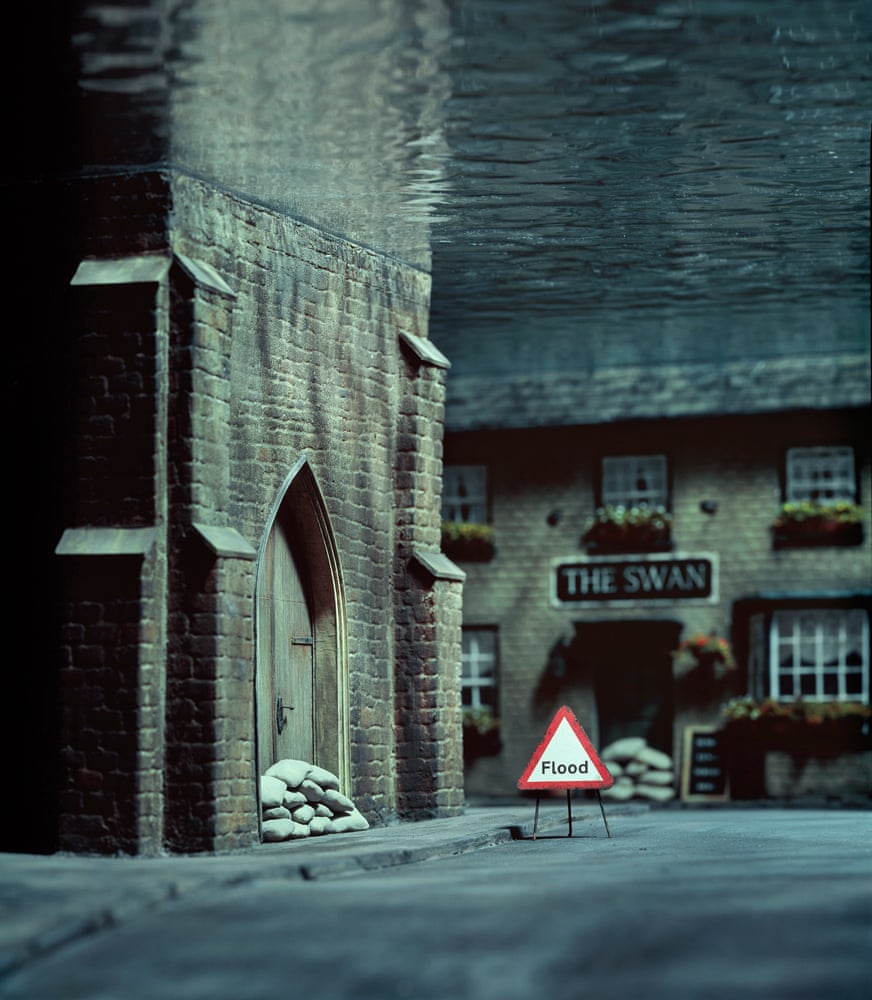 Kunert’s works walk a fine line between the humorous and the ominous. 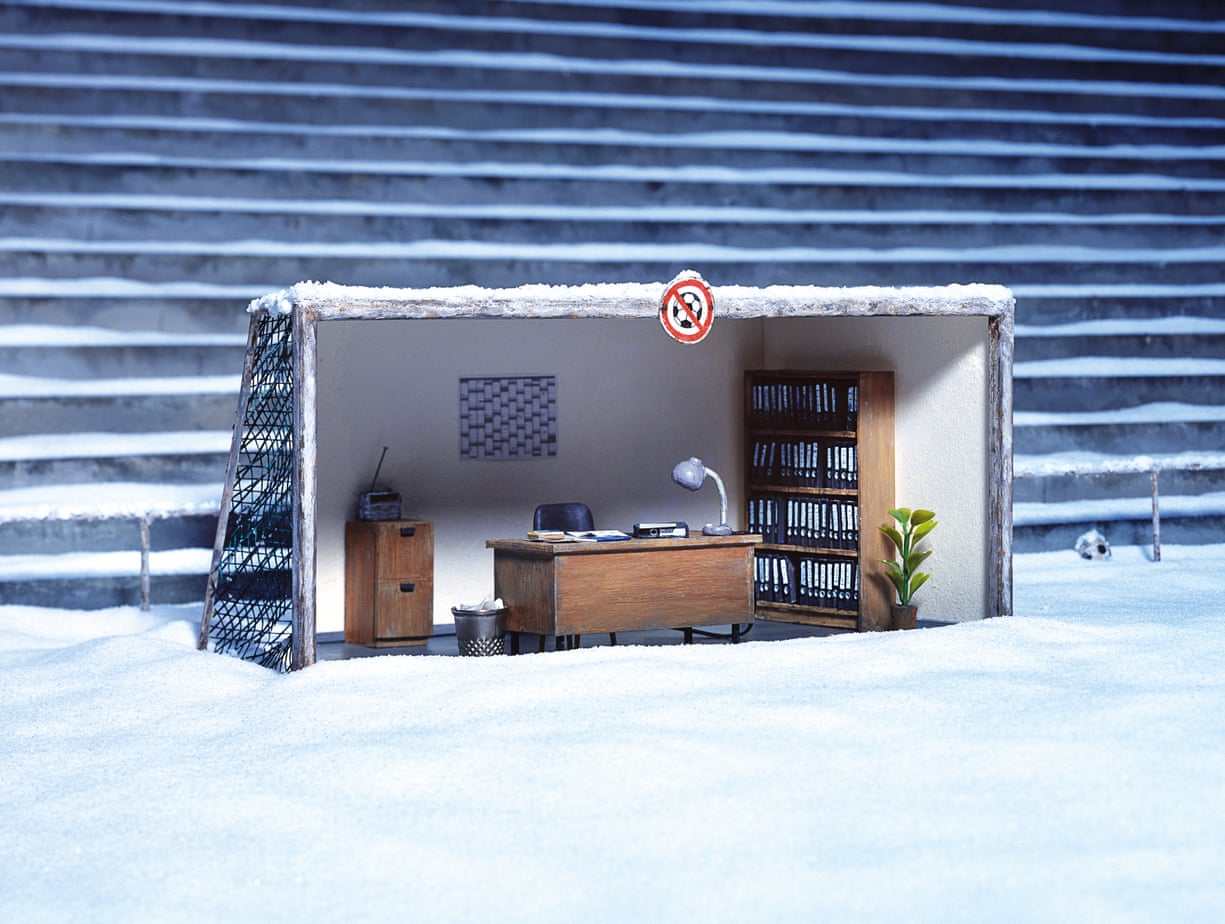 Kunert’s titles play an integral role in his works, this one taking several meanings – snow has made playing football on this pitch impossible, and turned the goal into a dinky study, replete with a no-football sign. 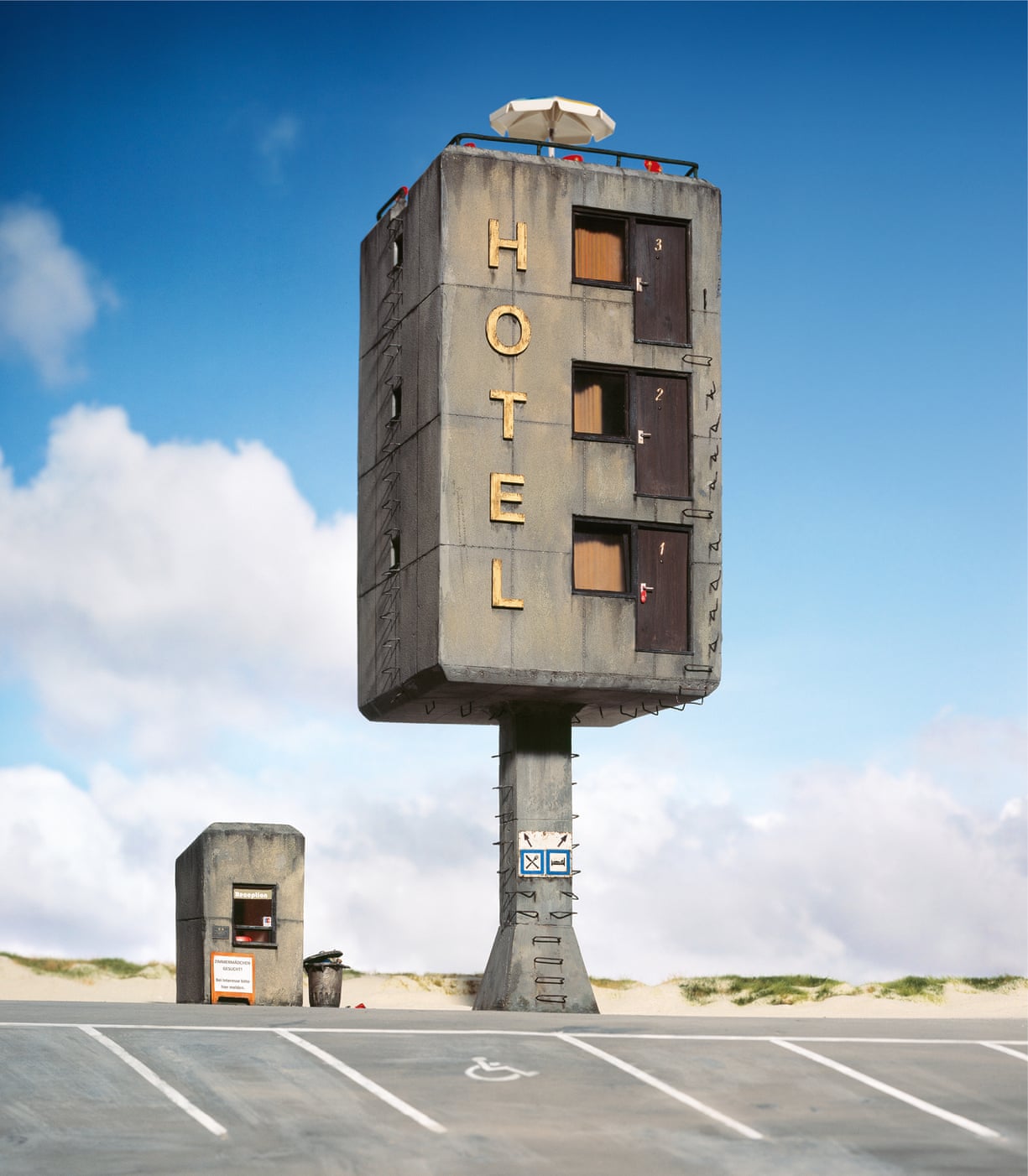 This model of a hotel on stilts brings to mind Tatzu Nishi’s suspended spaces, in which rooms, and even functioning hotels, are installed around historical public monuments.