“Origin Of The Beginning”: Surreal Woden Installations Inspired By The Childhood Memories Of Levi van Veluw

Dutch artist Levi van Veluw will showcase new work from a series of new installations, photographs and videos in which he draws from his own childhood memories to thematically and narratively develop his own brand ofself-portraiture.

The artist has created 3 “rooms” covered withmore than 30.000 wooden blocks, balls and slats respectively.
(without any digital manipulation) Each“room” is executed as a life-size installation (4m x 2.5m x 2.5m) andwill be presented at the gallery together with photographs and videos.

Portrayed in one piece is a desk, a table lamp, a bookcase. Theedge of the table is burned by Levi van Veluw as he had an obsessionfor fire. All of these objects including every inch of the floor, wallsand ceiling is covered in the same material: 14.000 16 cm2 dark brownwooden blocks. The blocks are made by the artist and glued on the wallone by one. The works suggest a narrative world behind the abstractportraits. 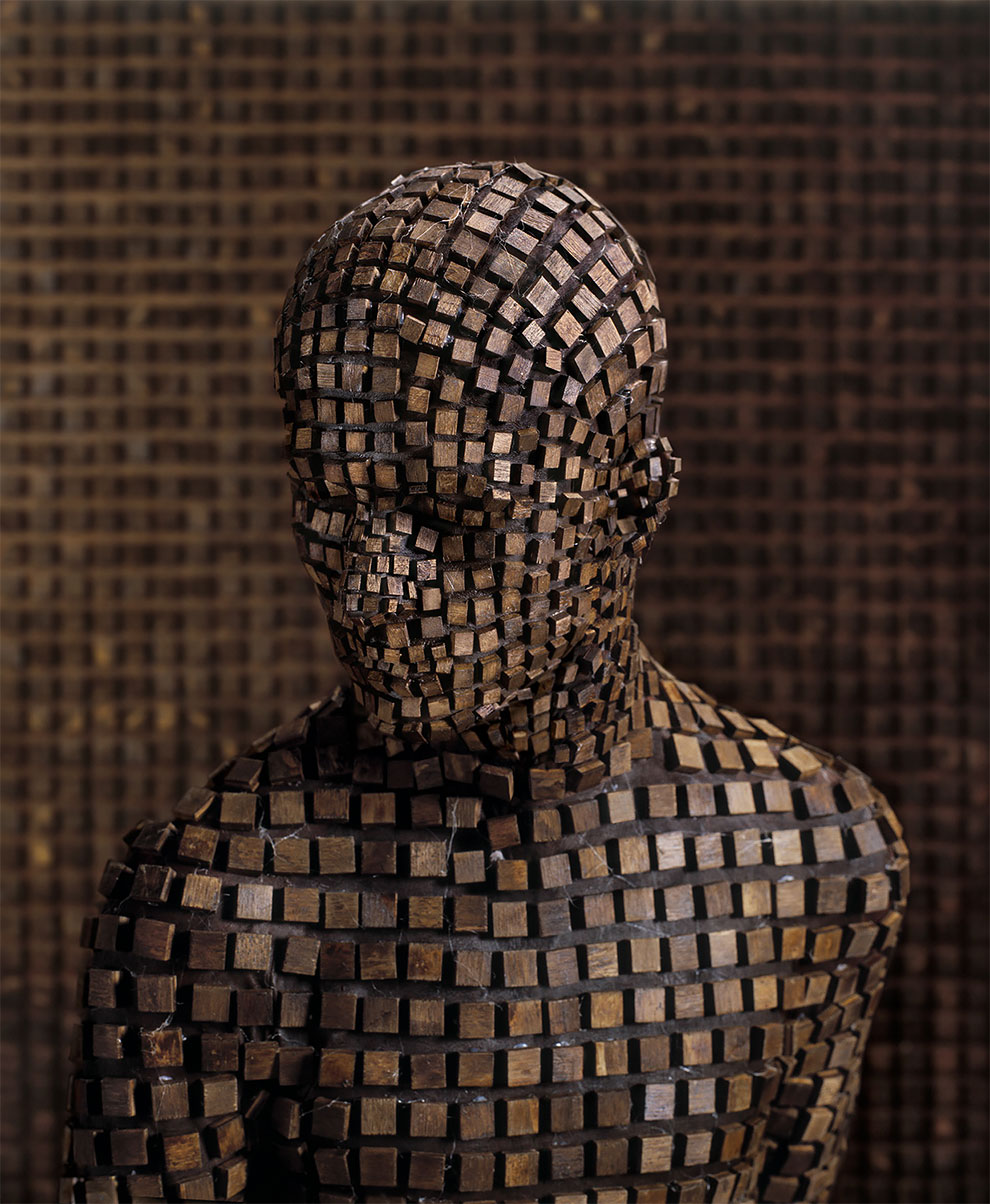 On the one hand these works present themselves as a continuation of vanVeluw’s formal approach to self-portraiture, with their preoccupationfor materiality, pattern and texture. Yet they are simultaneously verypersonal pieces. The repetitive structures seemingly express a ‘horrorvacui’ and recall van Veluw the youth and his obsessive attempts togain control on his life by gaining control of his surroundings. 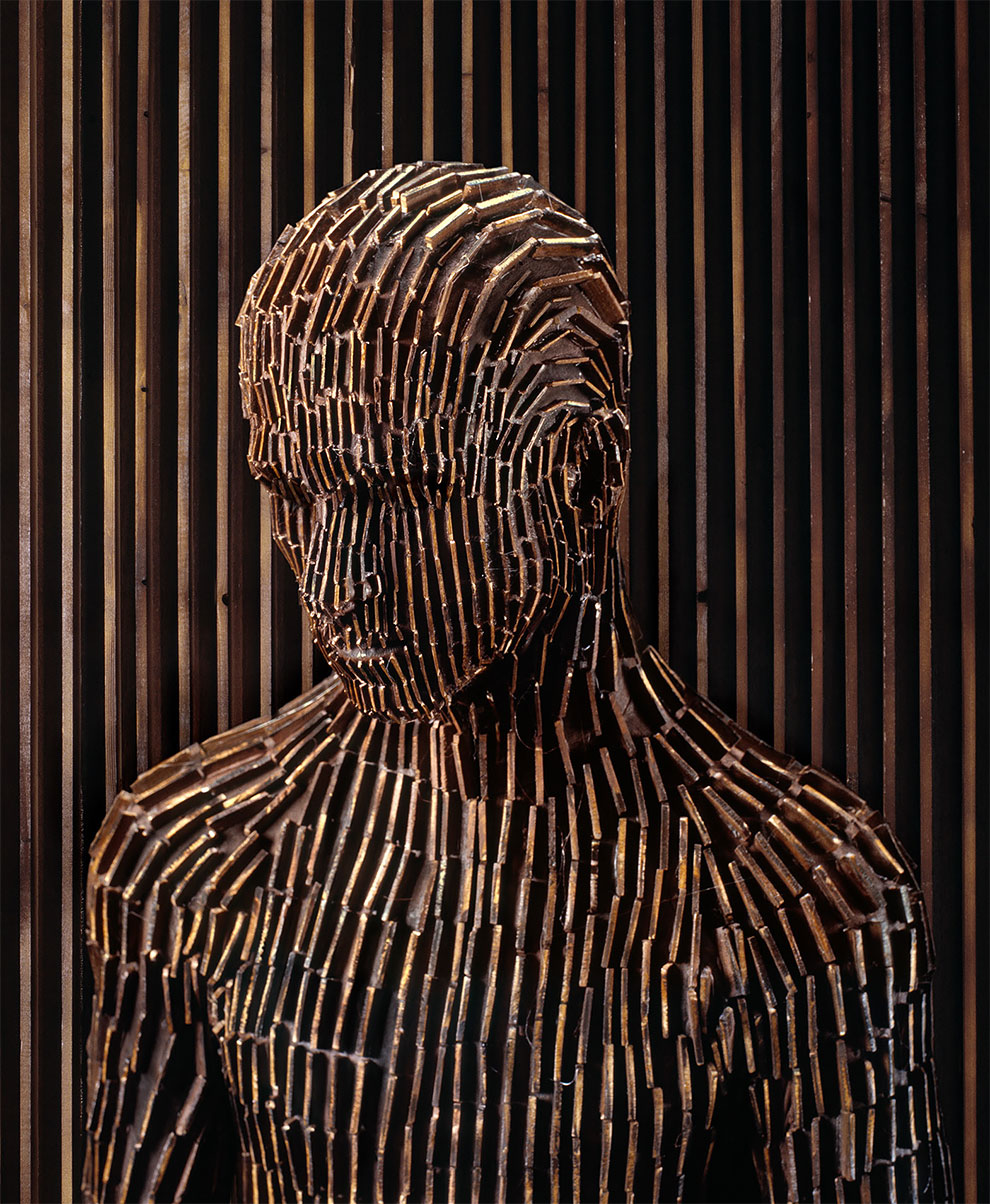 Dimlylight and dark in colour the overriding tone of these pieces areclaustrophobic and sombre, exuding a sense of loneliness. Themeticulous craftsmanship and high quality material with which everylast knock and cranny is covered, result in a series of works that arealso highly aesthetic. 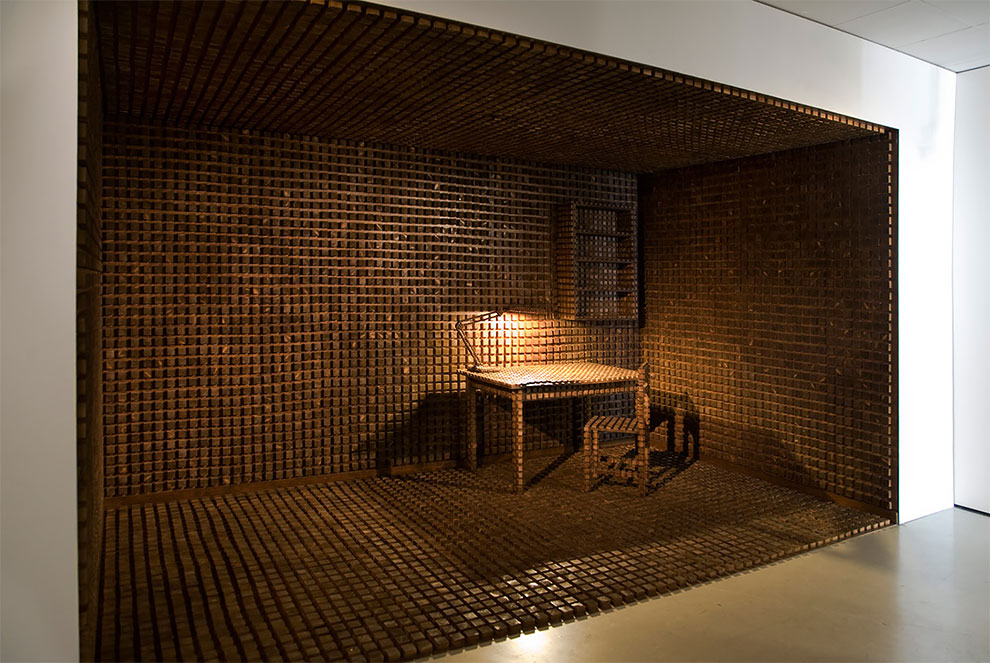 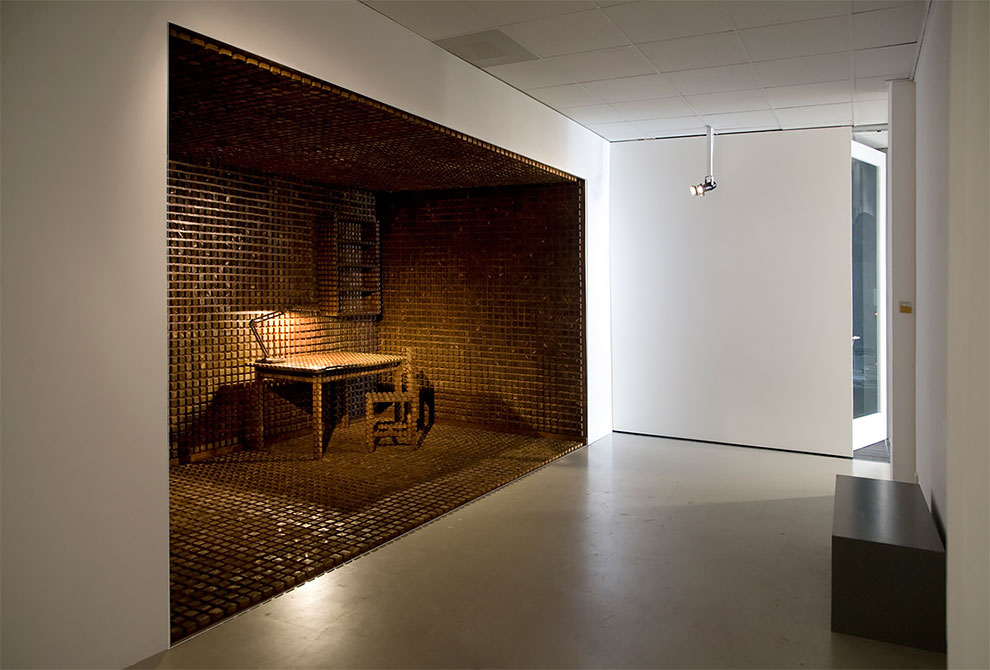 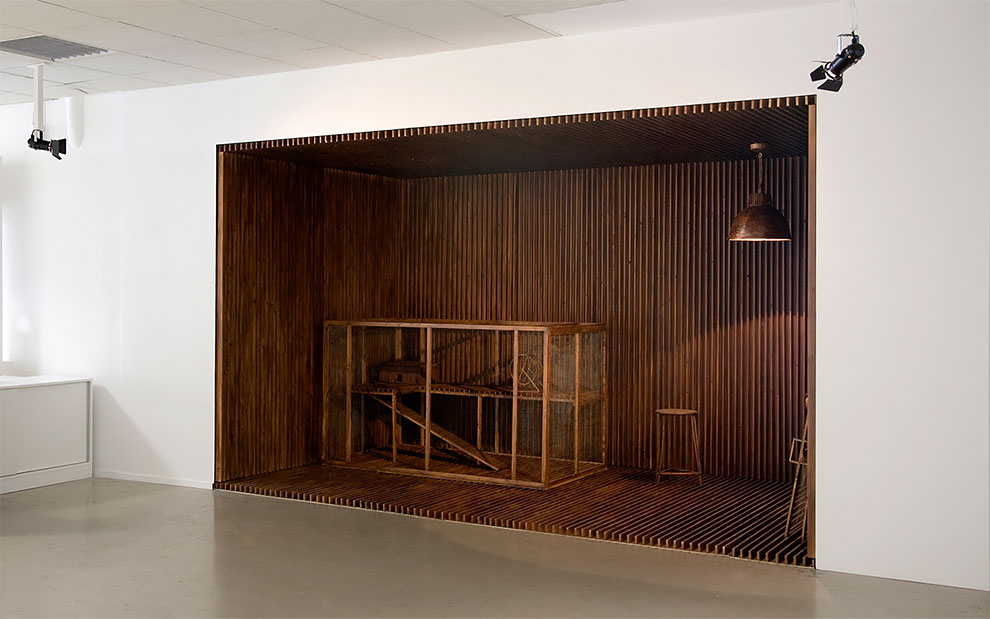 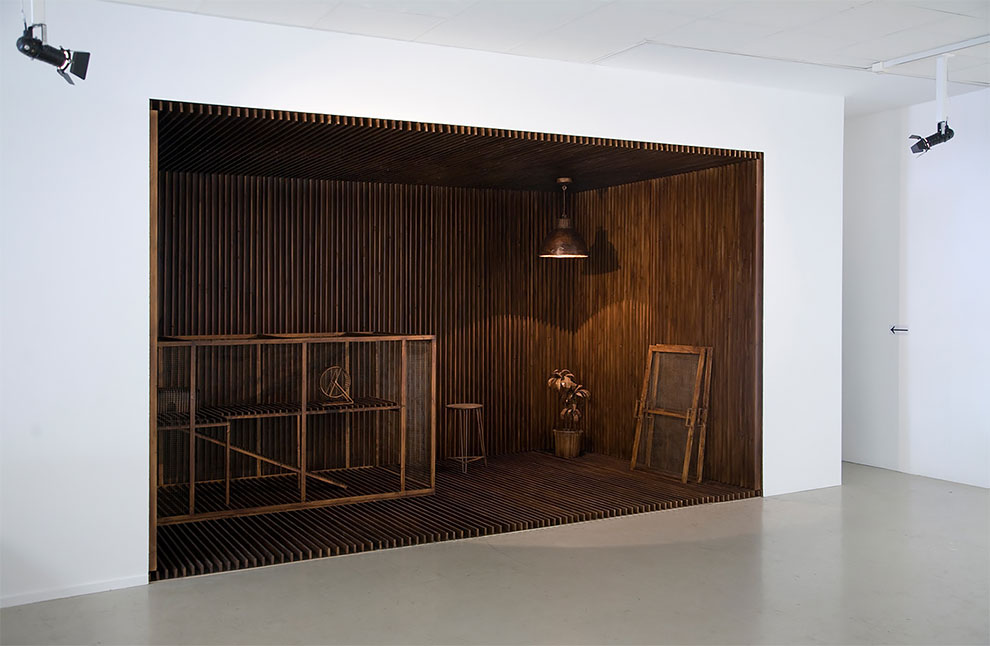 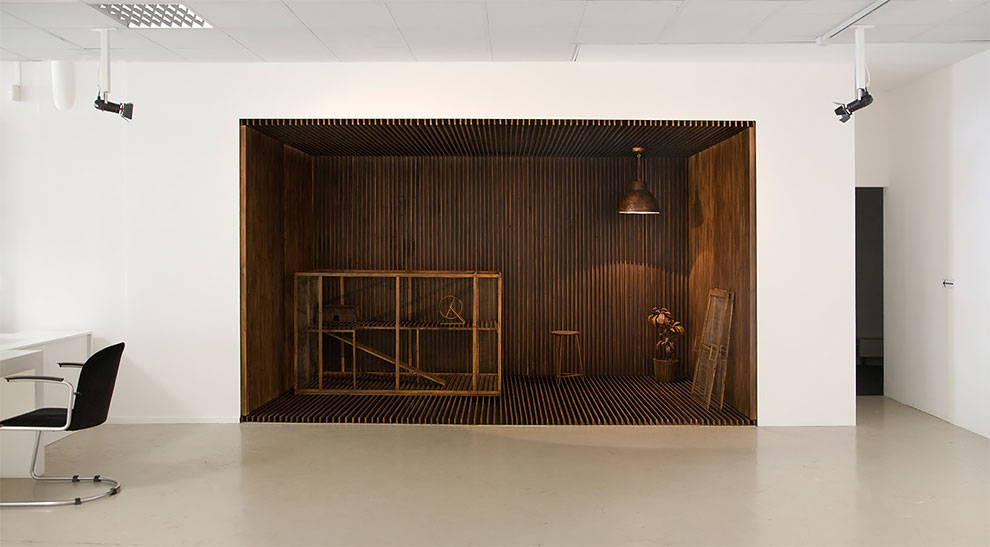 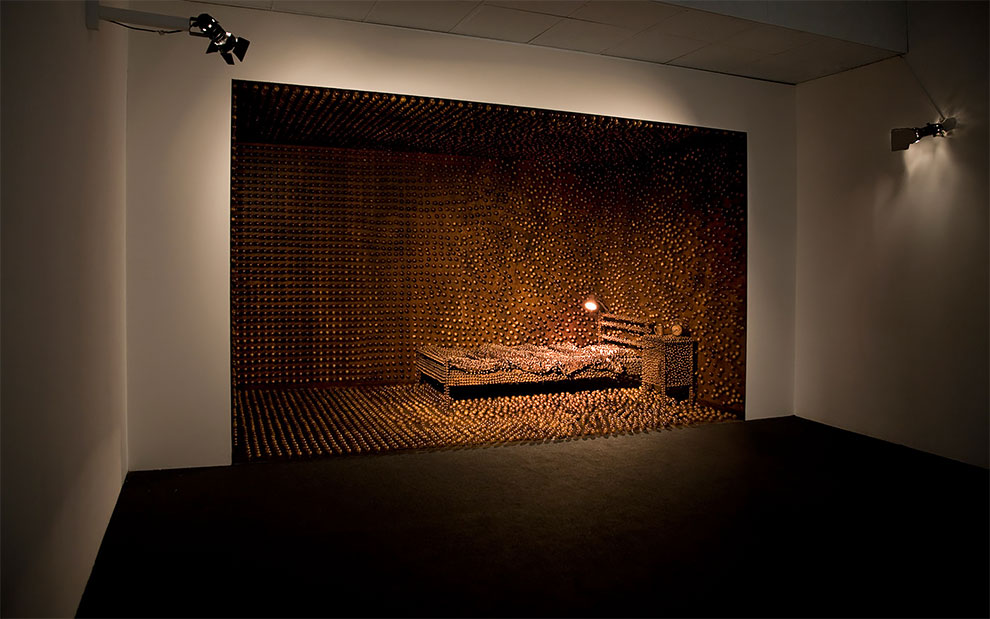 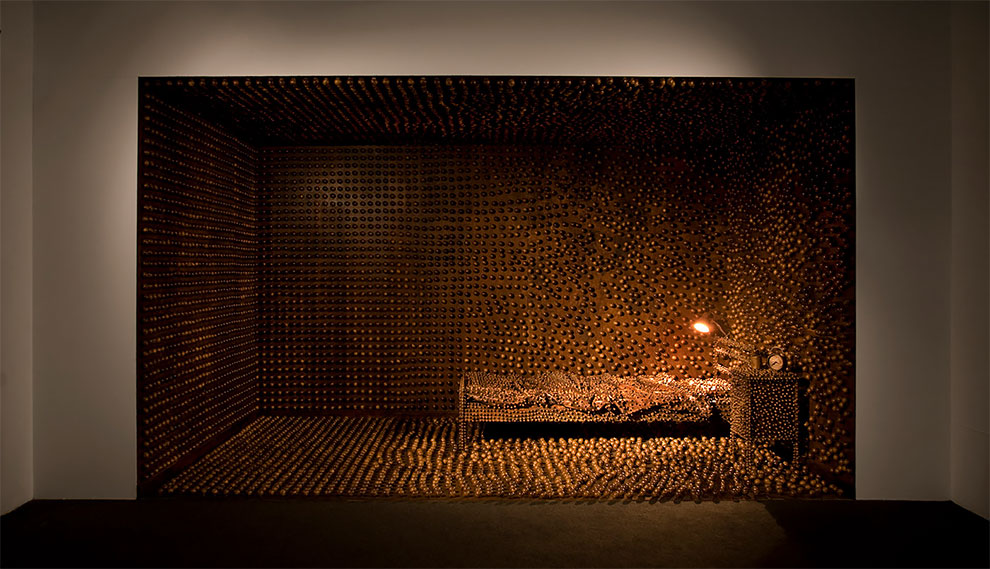