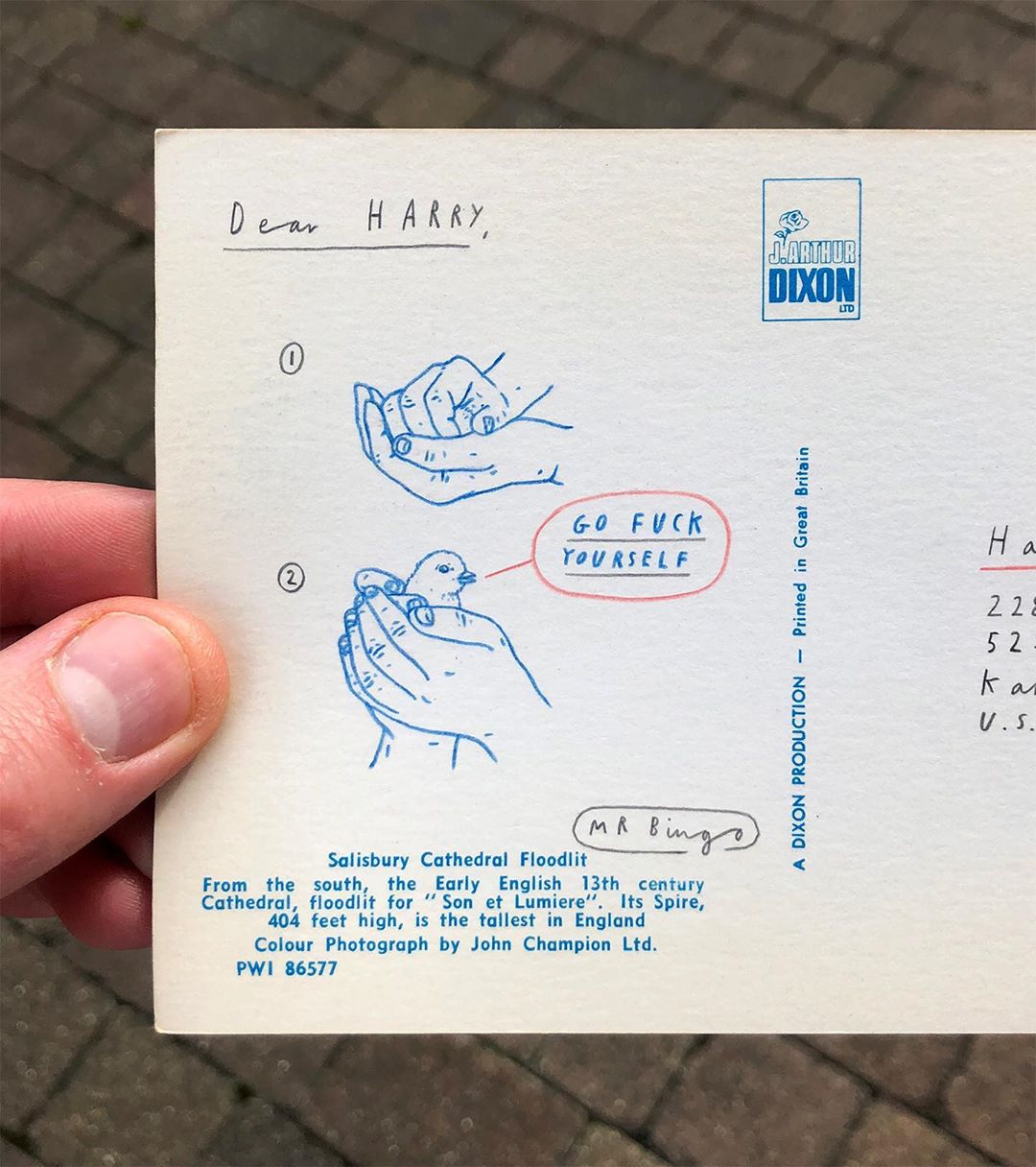 Mr Bingo grew up in Leigh, Kent and attended The Judd School in Tonbridge. In 1998 he studied a foundation course at the Kent Institute of Art & Design in Maidstone and it was during this year that he played Bingo at Gala Bingo in Maidstone earning him the nickname ‘Bingo’. He went on to study graphic design at Bath Spa University College and specialised in illustration. He graduated in 2001 and moved to London.

Mr Bingo is best known for his Hate Mail project which he began in 2011. The project, which involves sending offensive postcards to strangers, started as a ‘drunk idea’ but was then exhibited in galleries and led to 2 books. In 2012, Camden Town Brewery released a limited edition Hate Ale beer with Mr Bingo called Camden Town Is Full Of Cunts. 5000 bottles were produced.

In the summer of 2015 Mr Bingo ran a Kickstarter campaign to fund a high-end art book of his Hate Mail illustrations. The campaign, which was launched with a rap video for which Mr Bingo wrote and recorded an original song, was set to run for 28 days but was successfully funded within 9 hours and finished 386% funded with 3,732 backers, becoming the most successful ever Kickstarter campaign for a book in the UK. 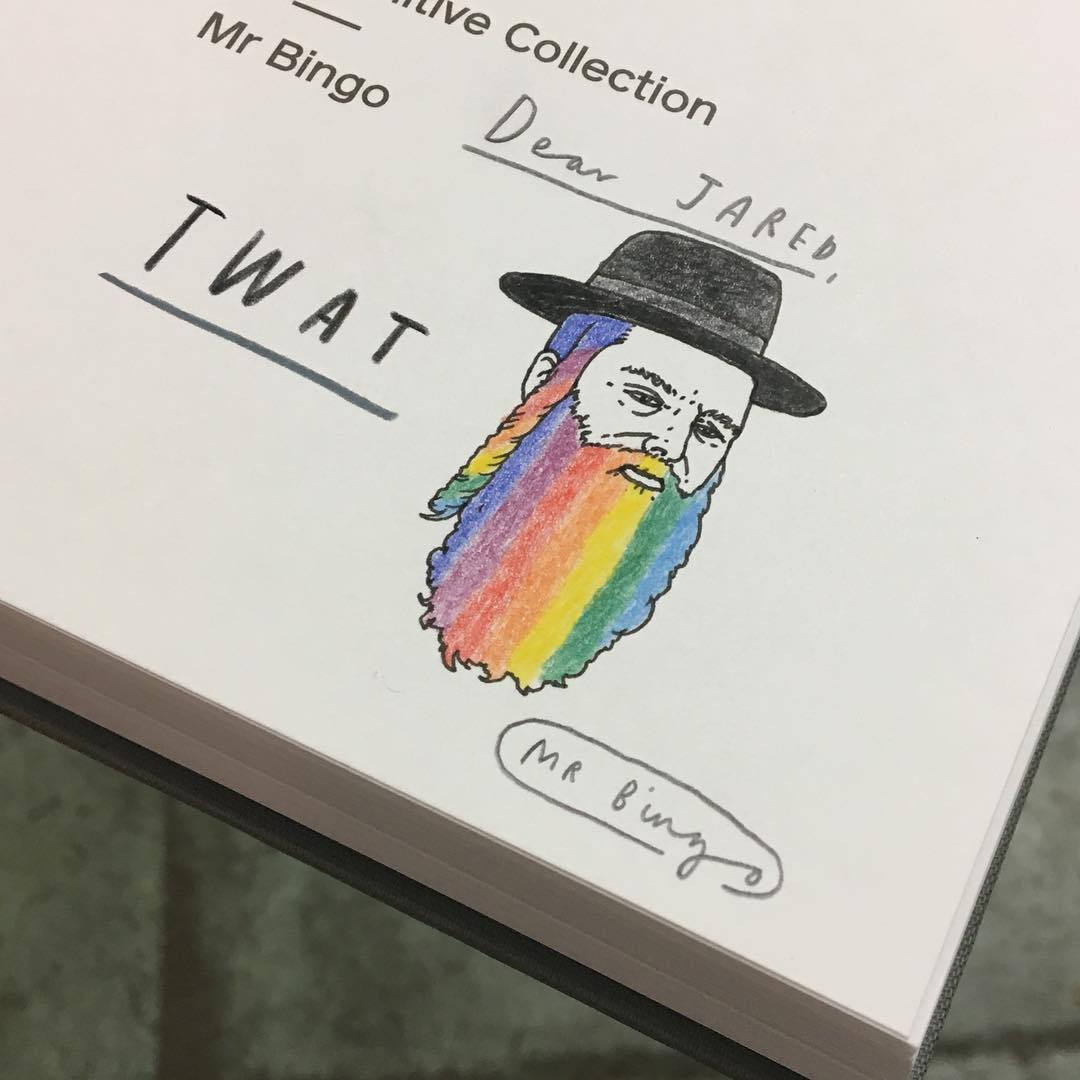 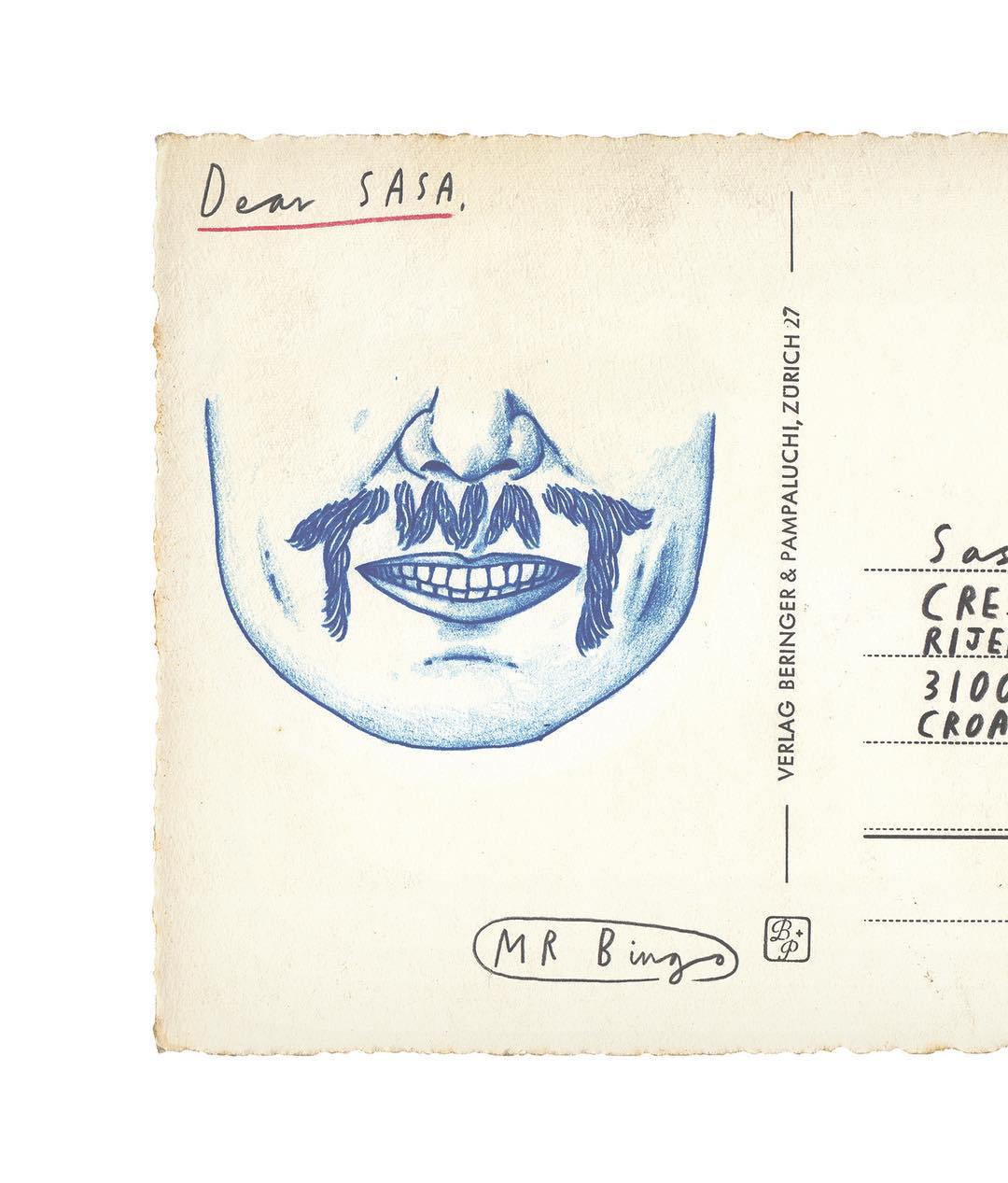 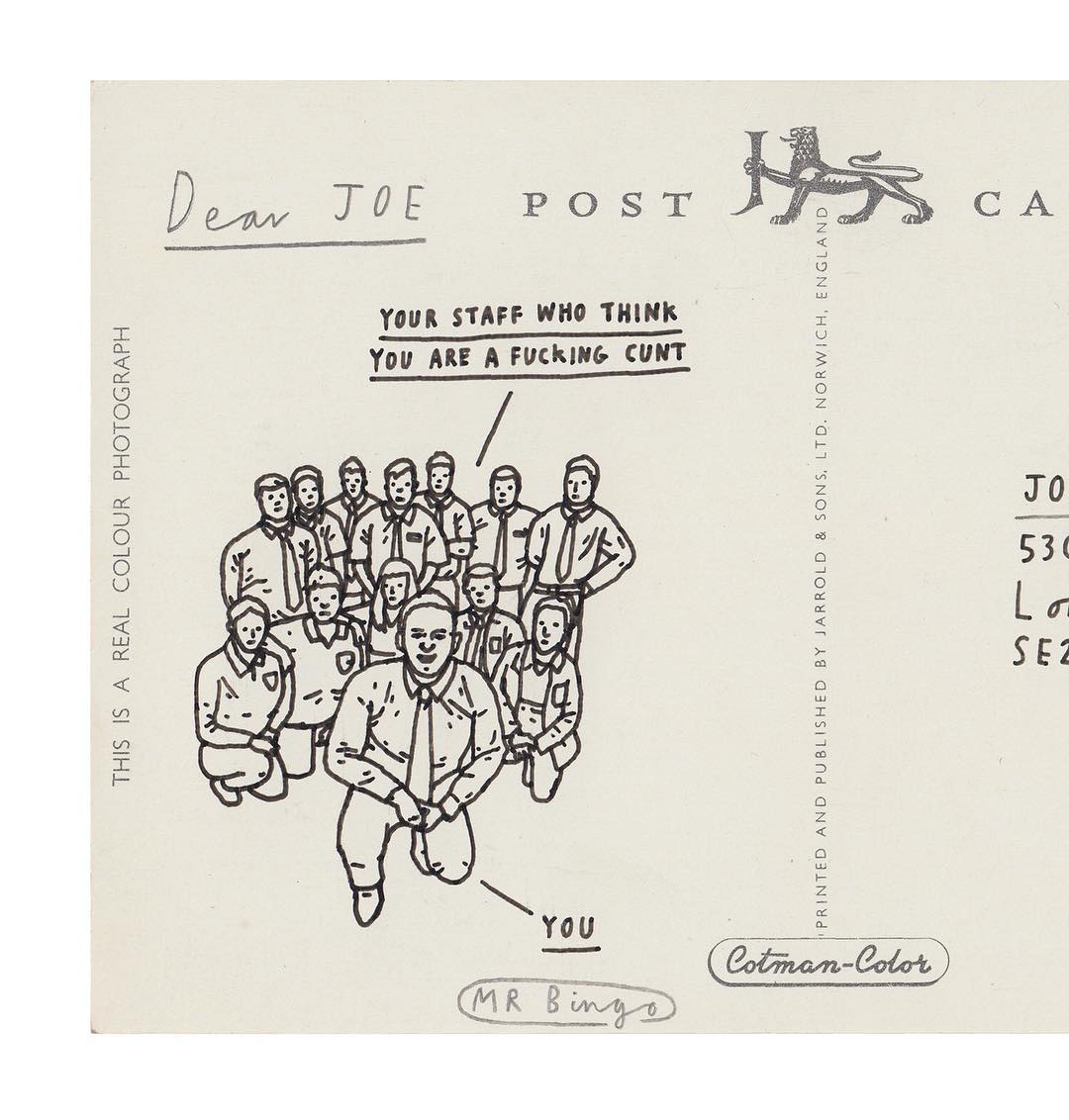 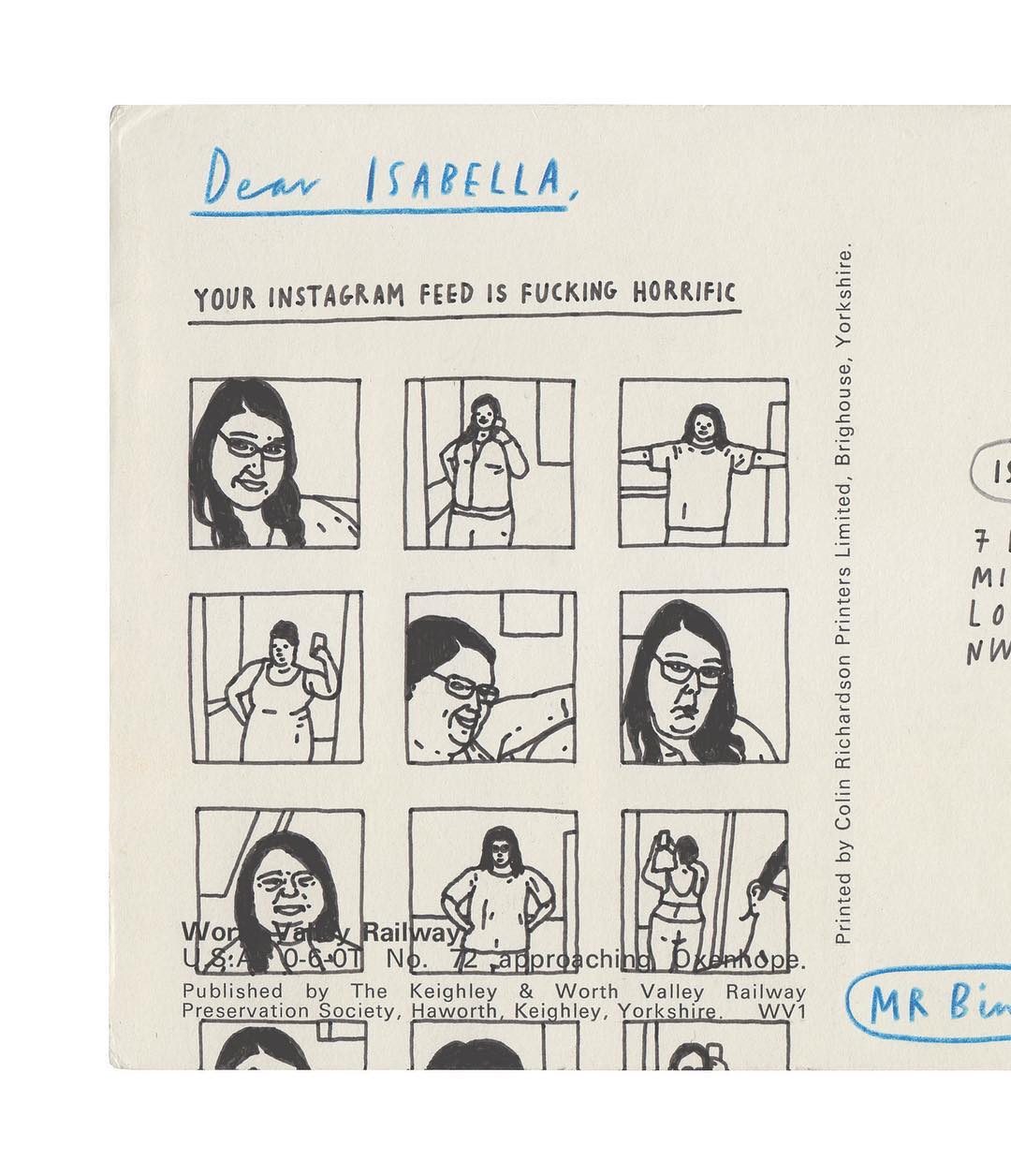 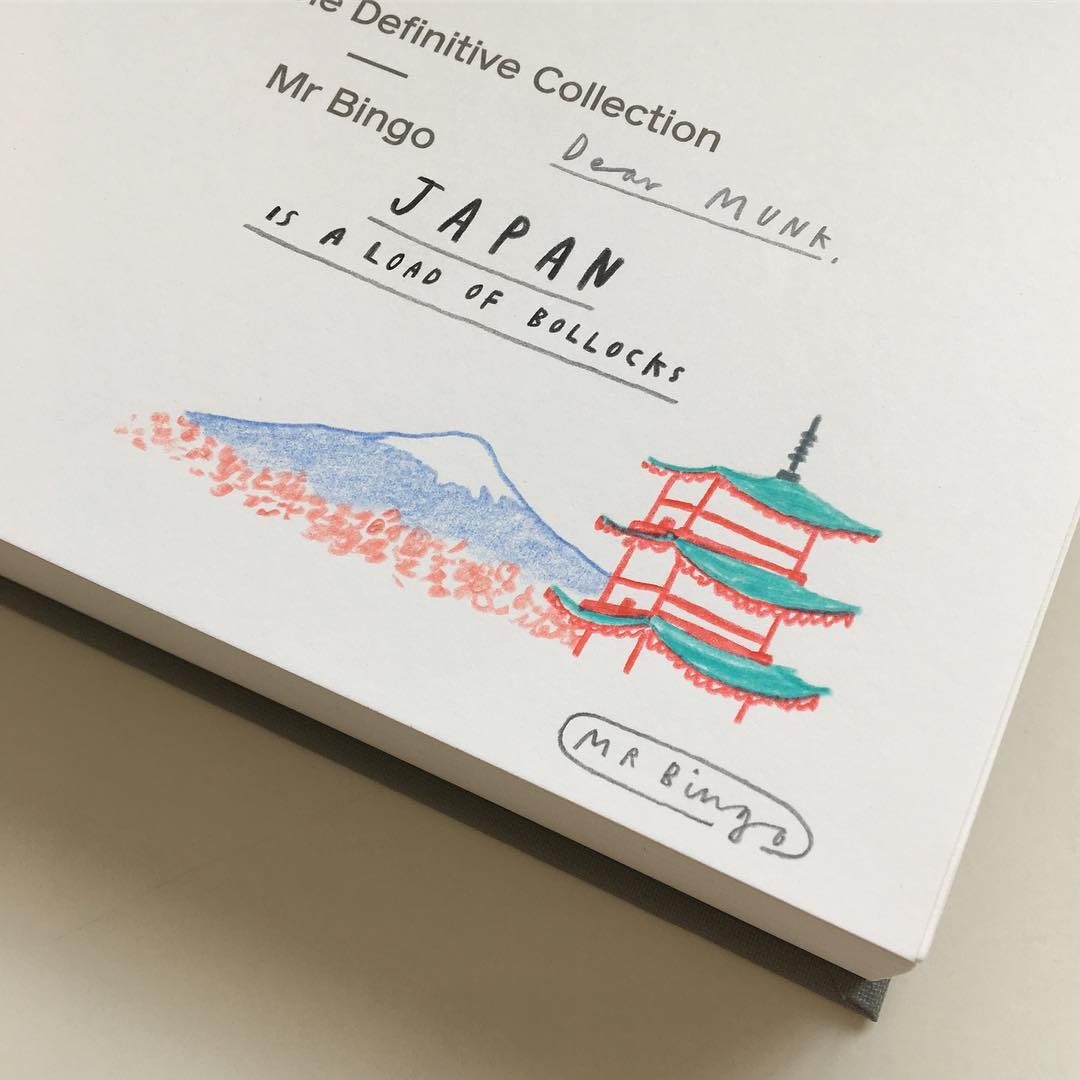 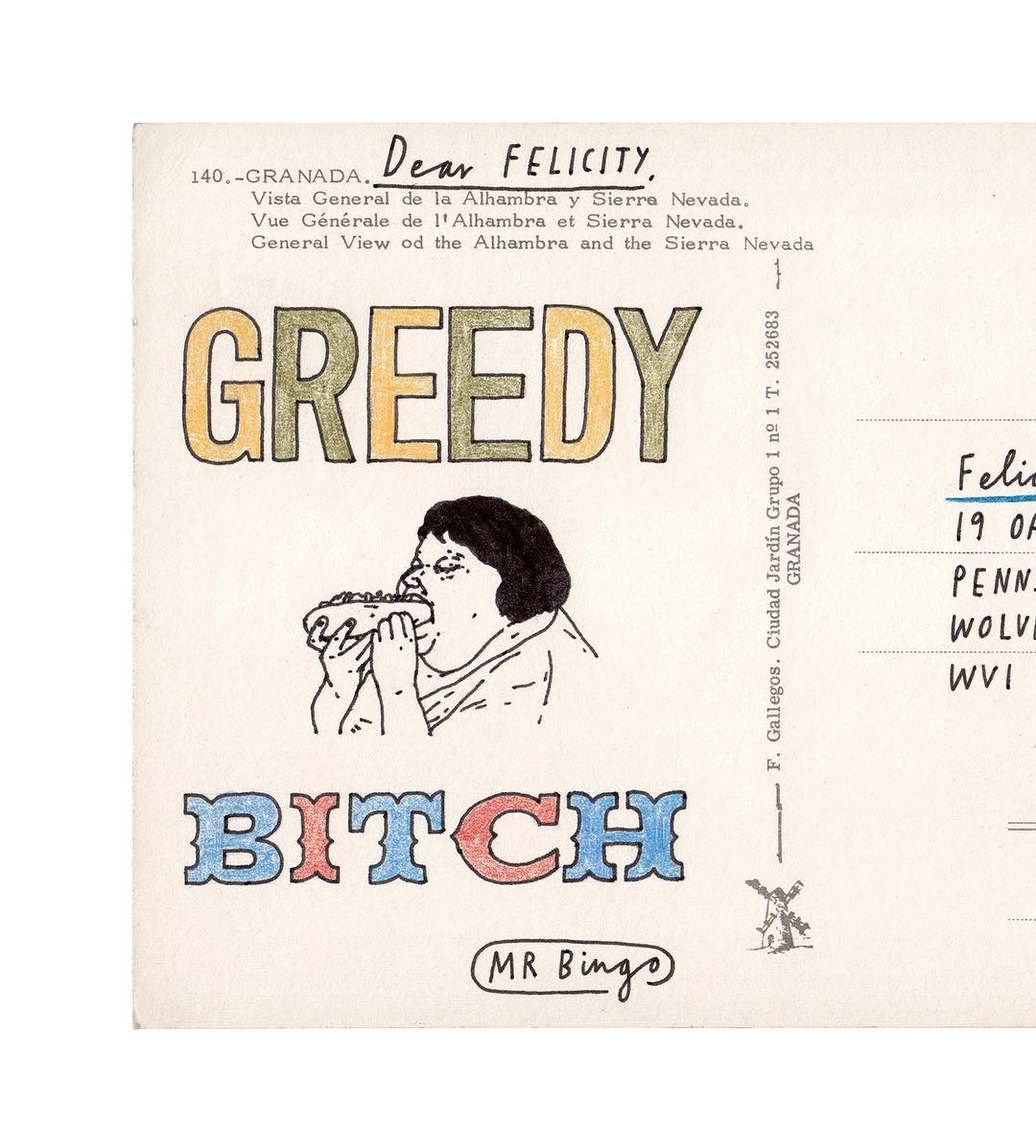 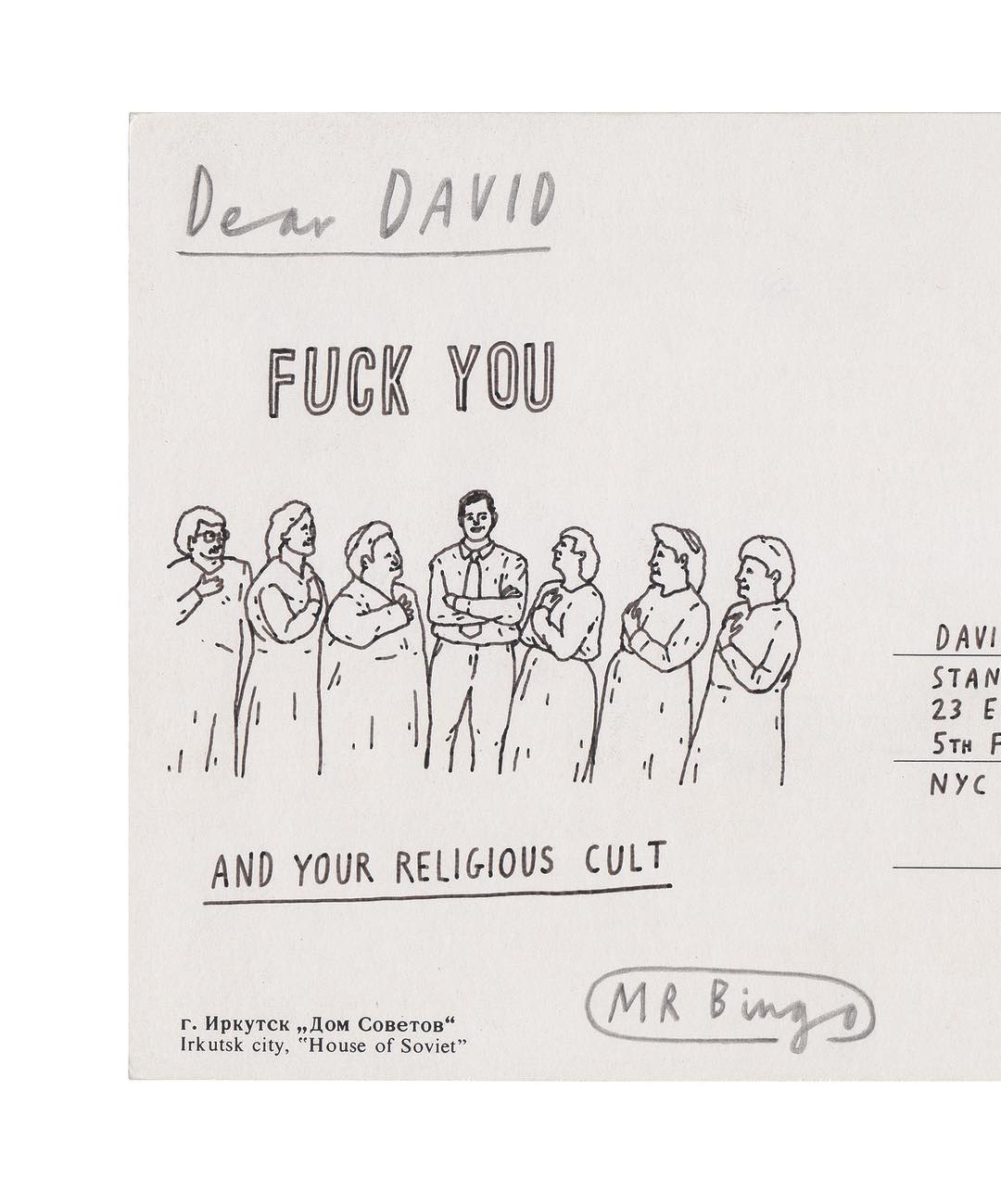 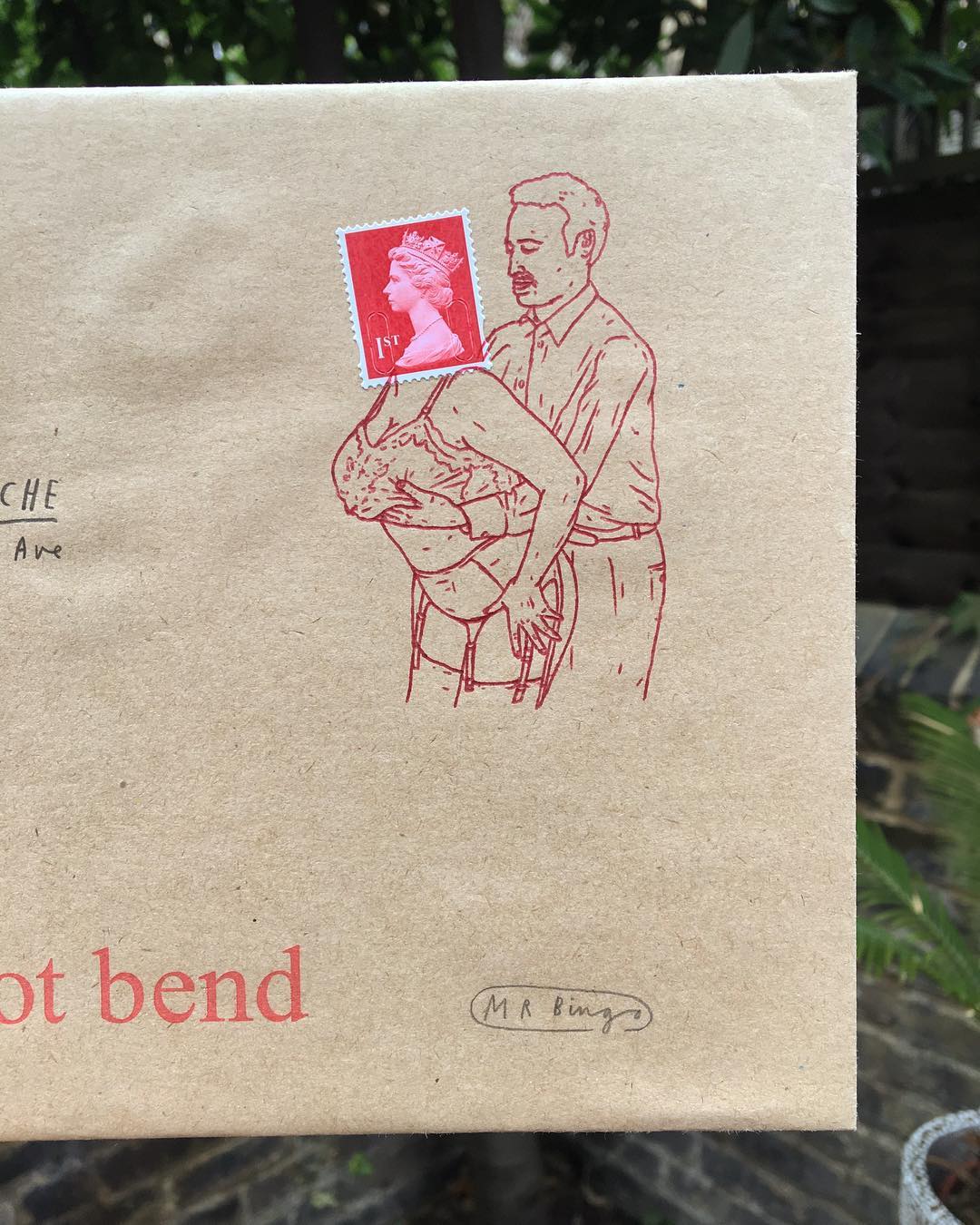 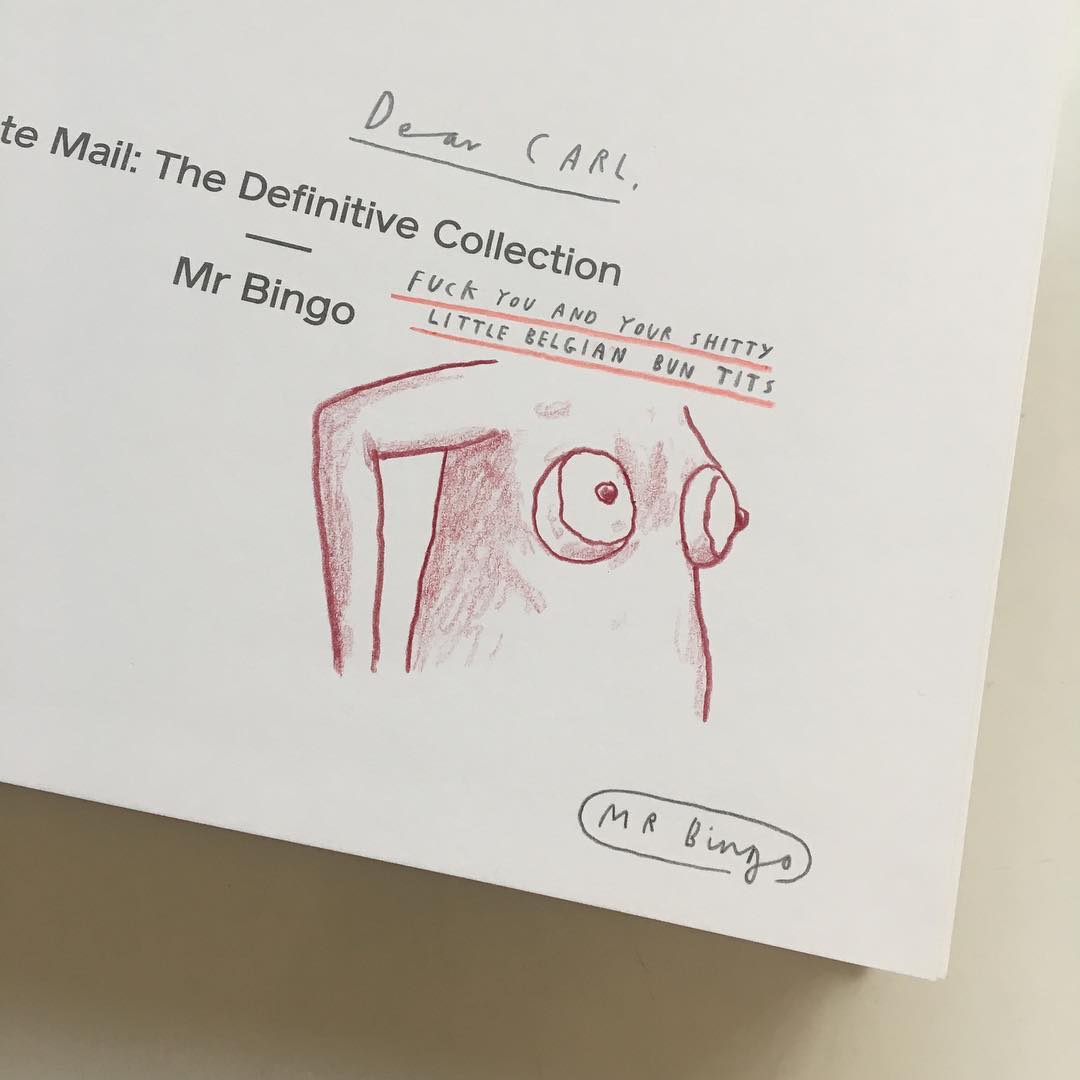 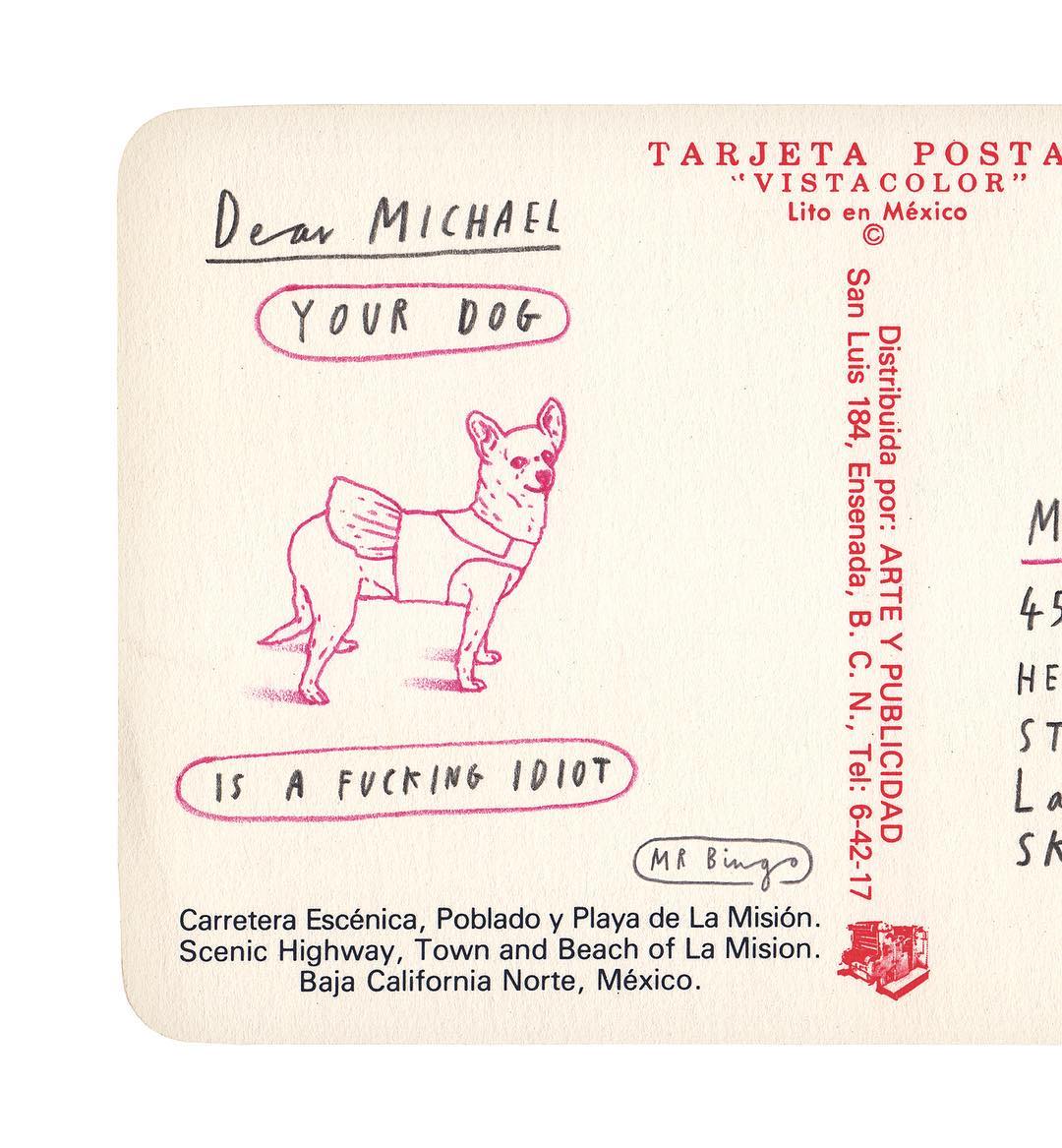 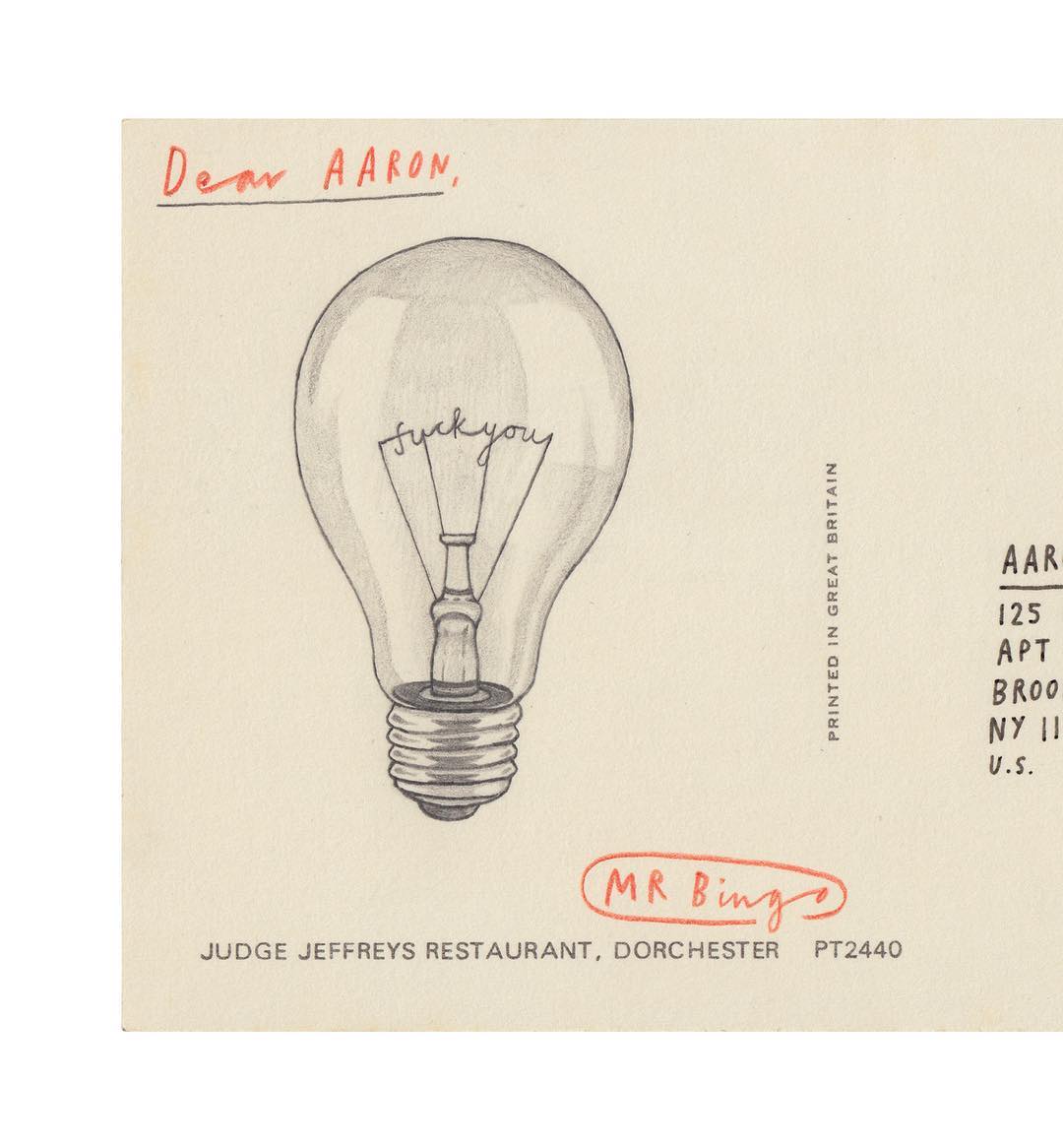 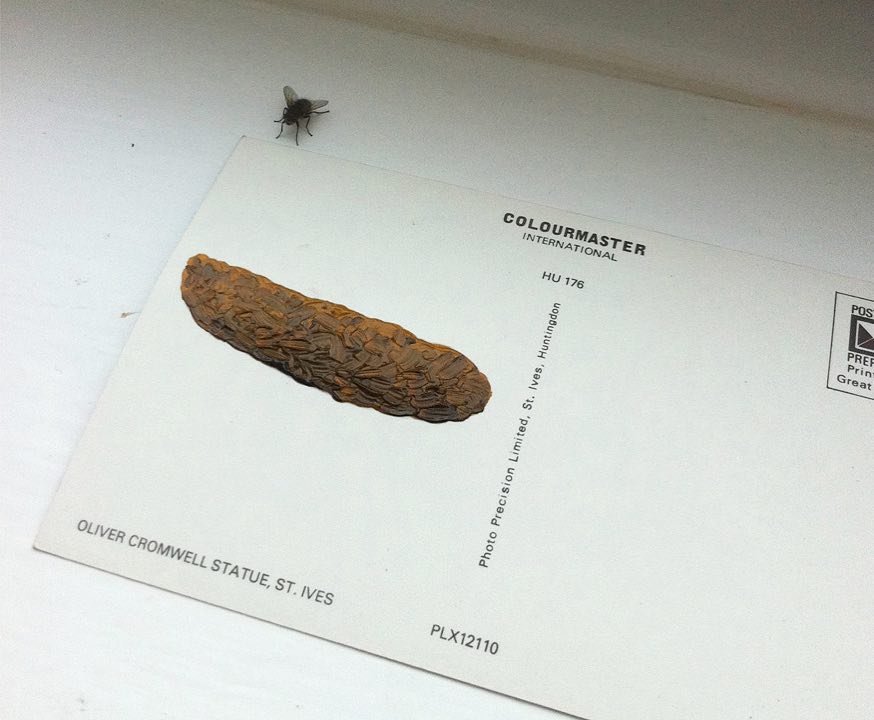 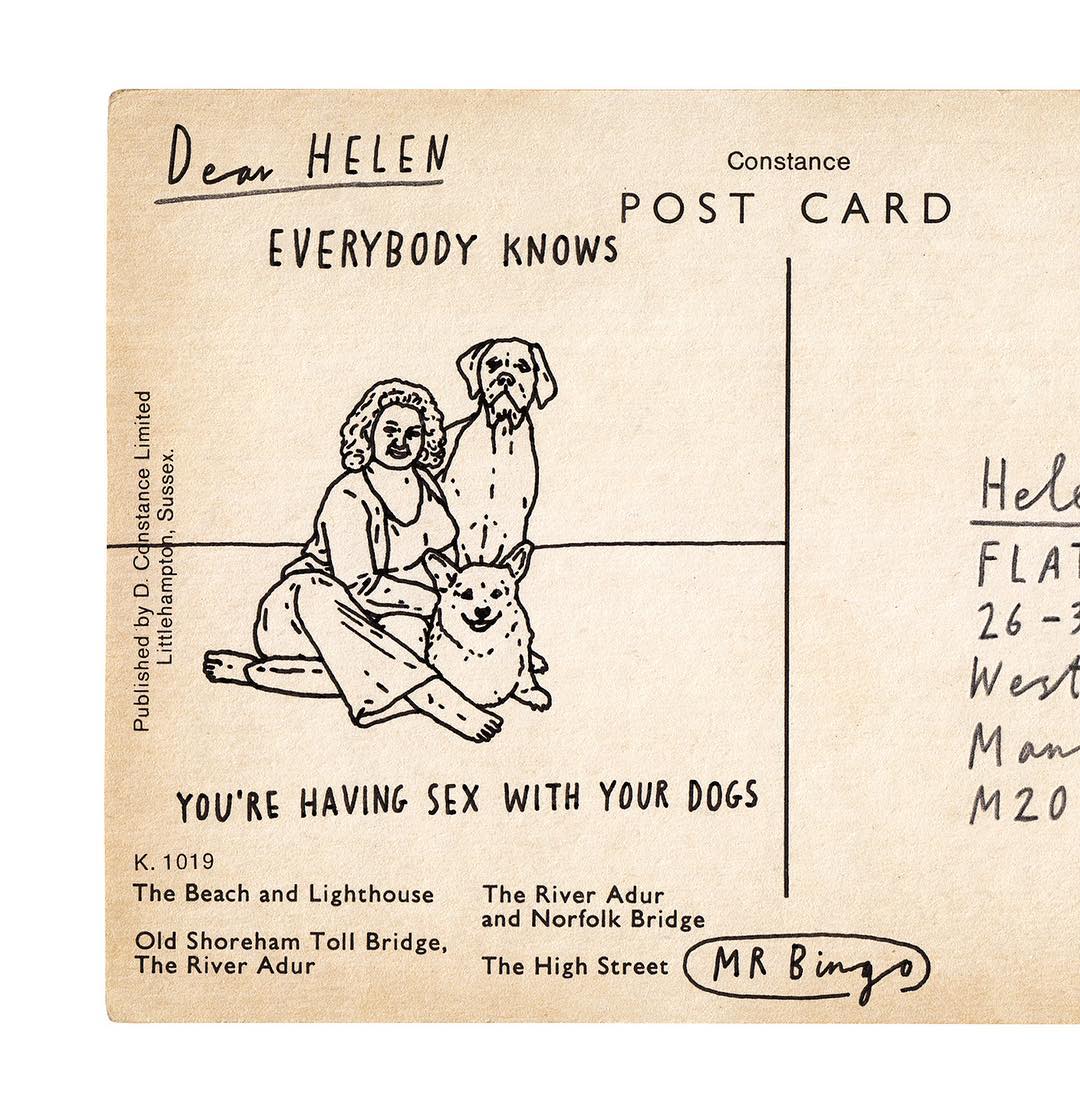 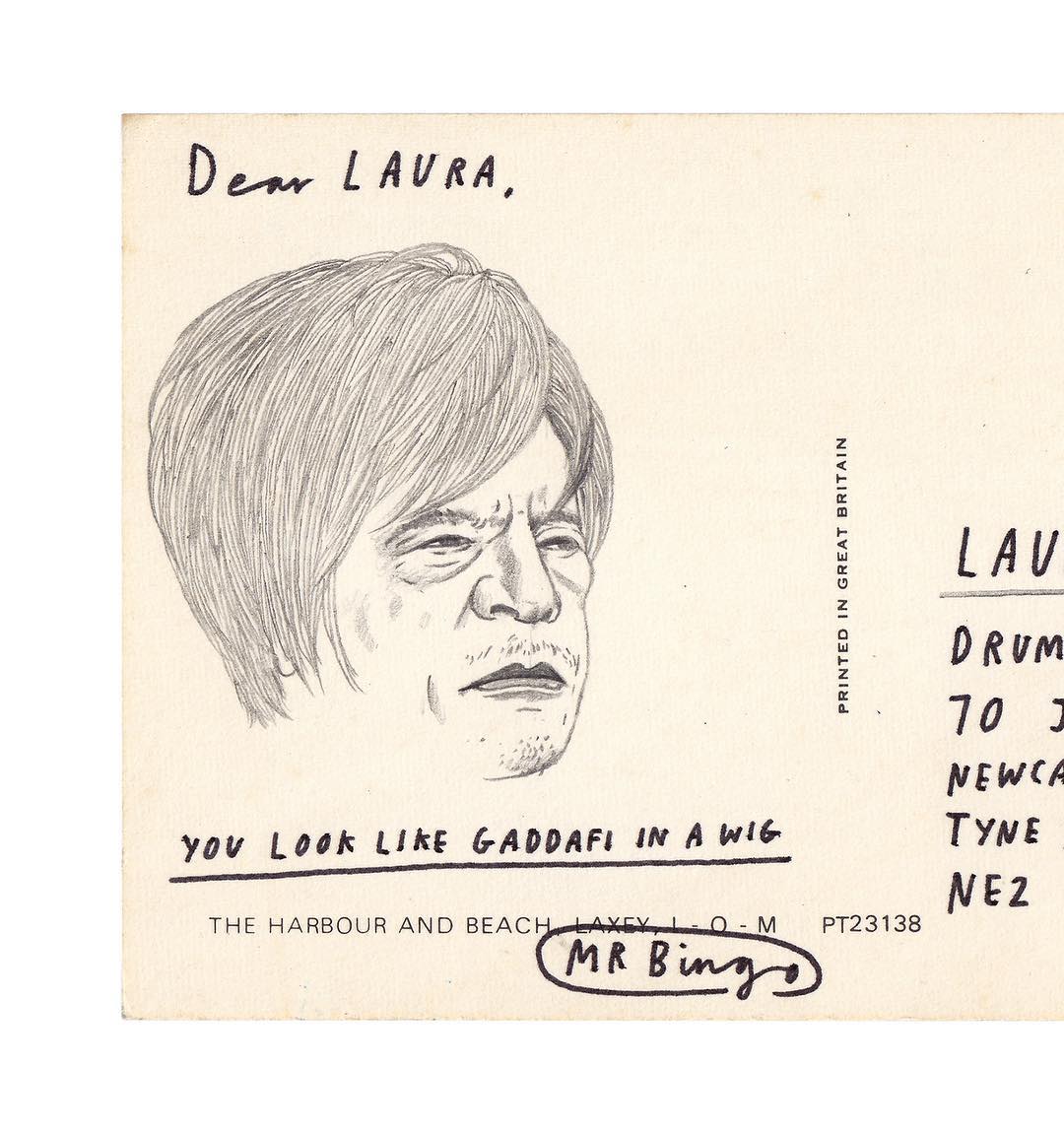 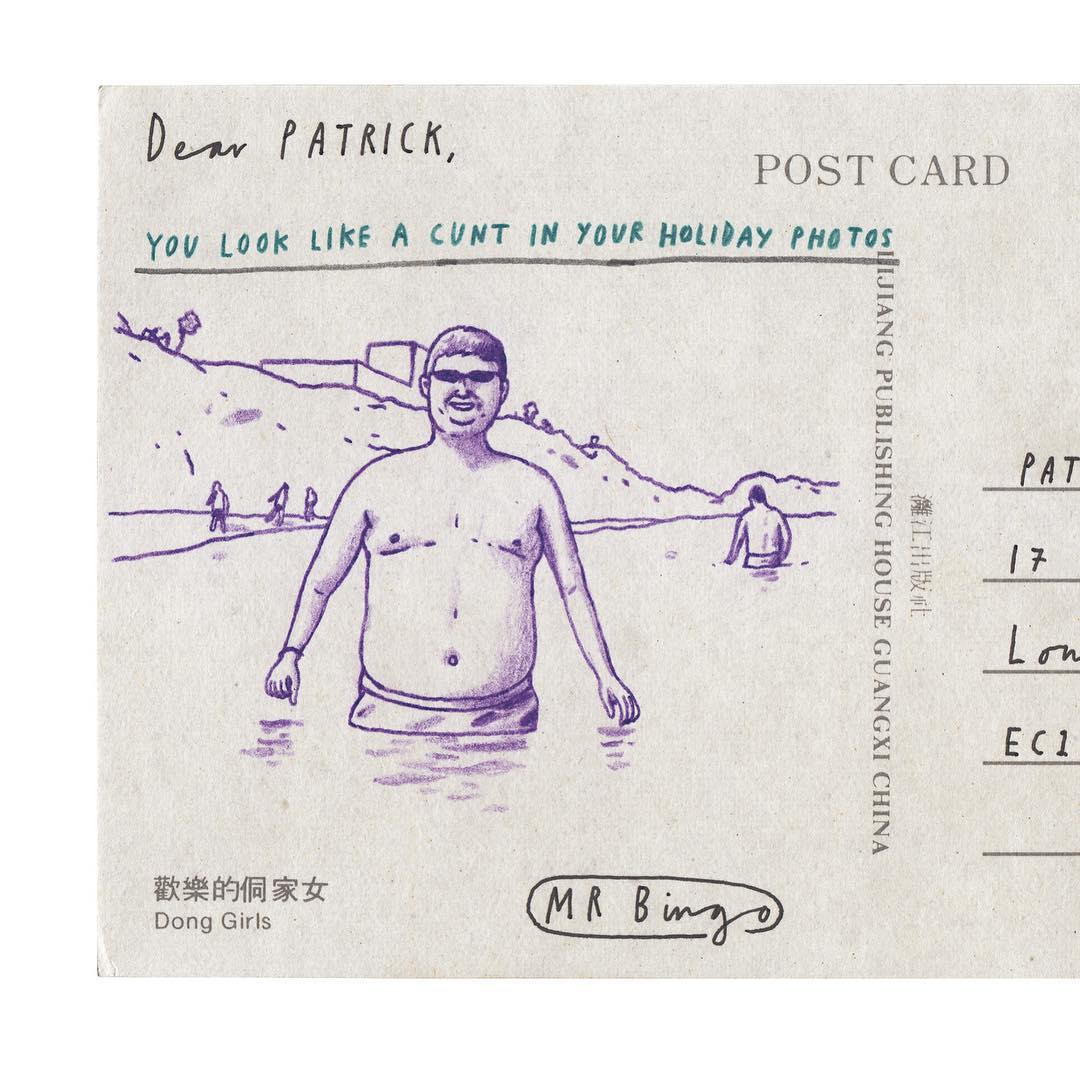 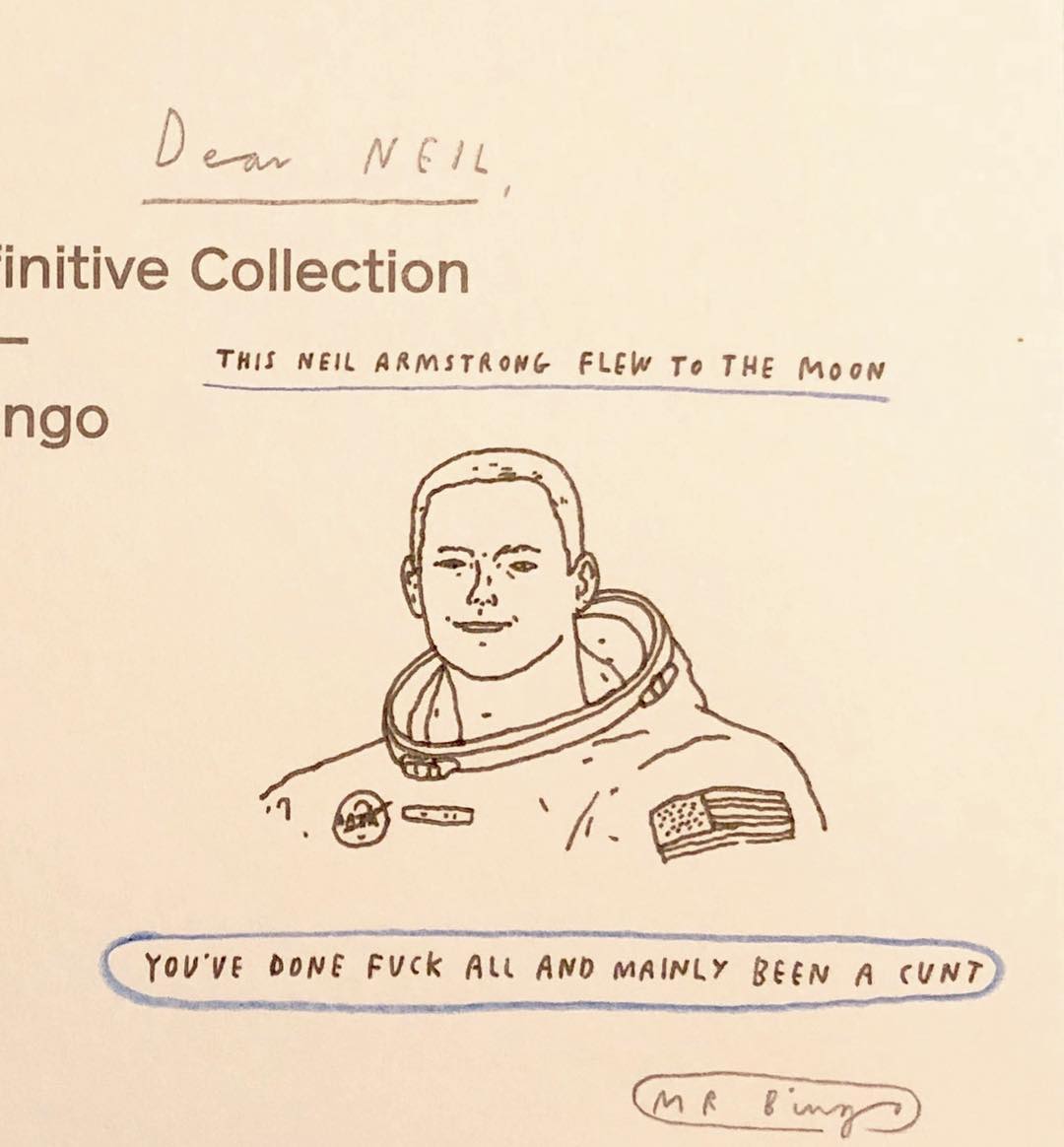 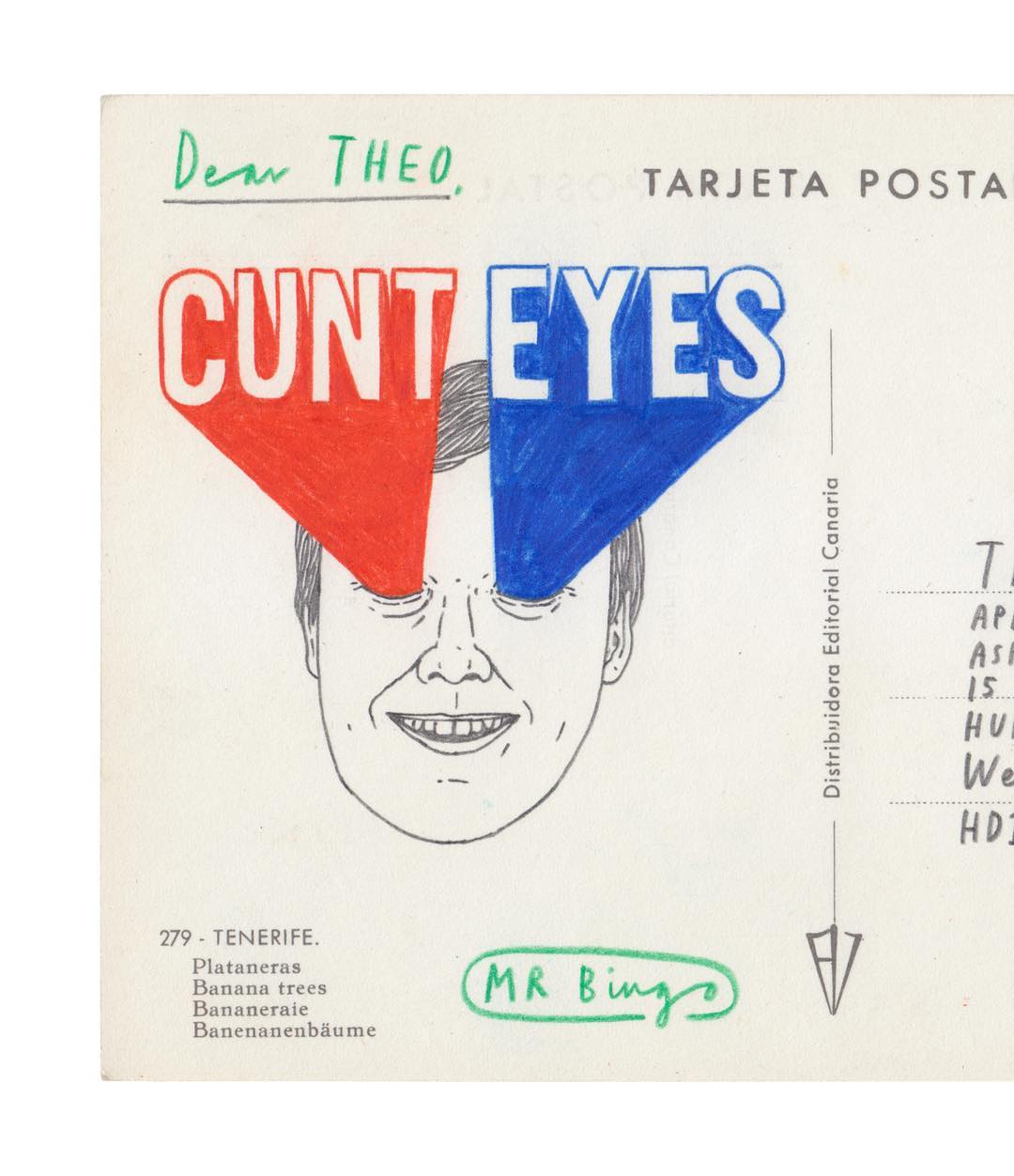 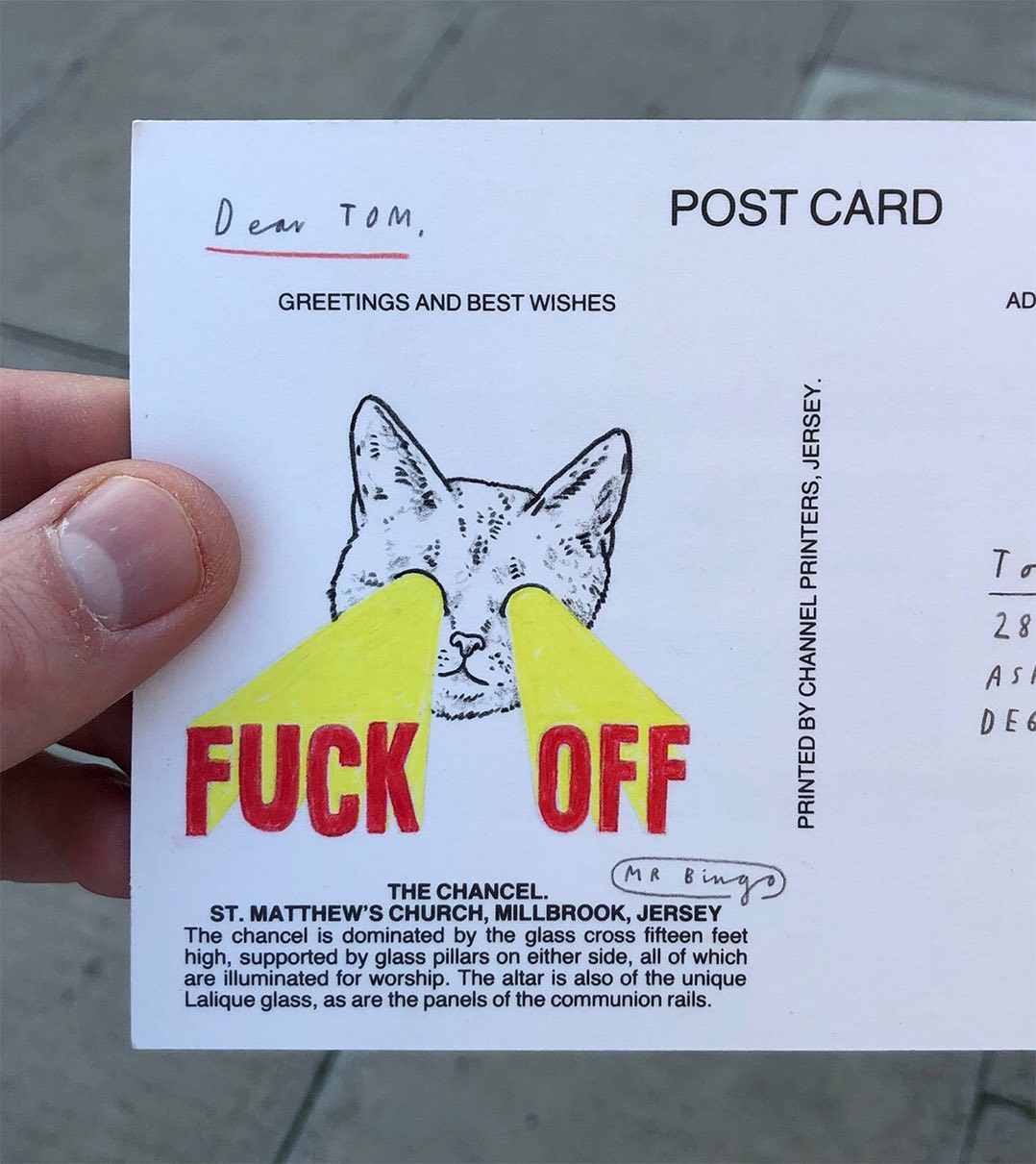 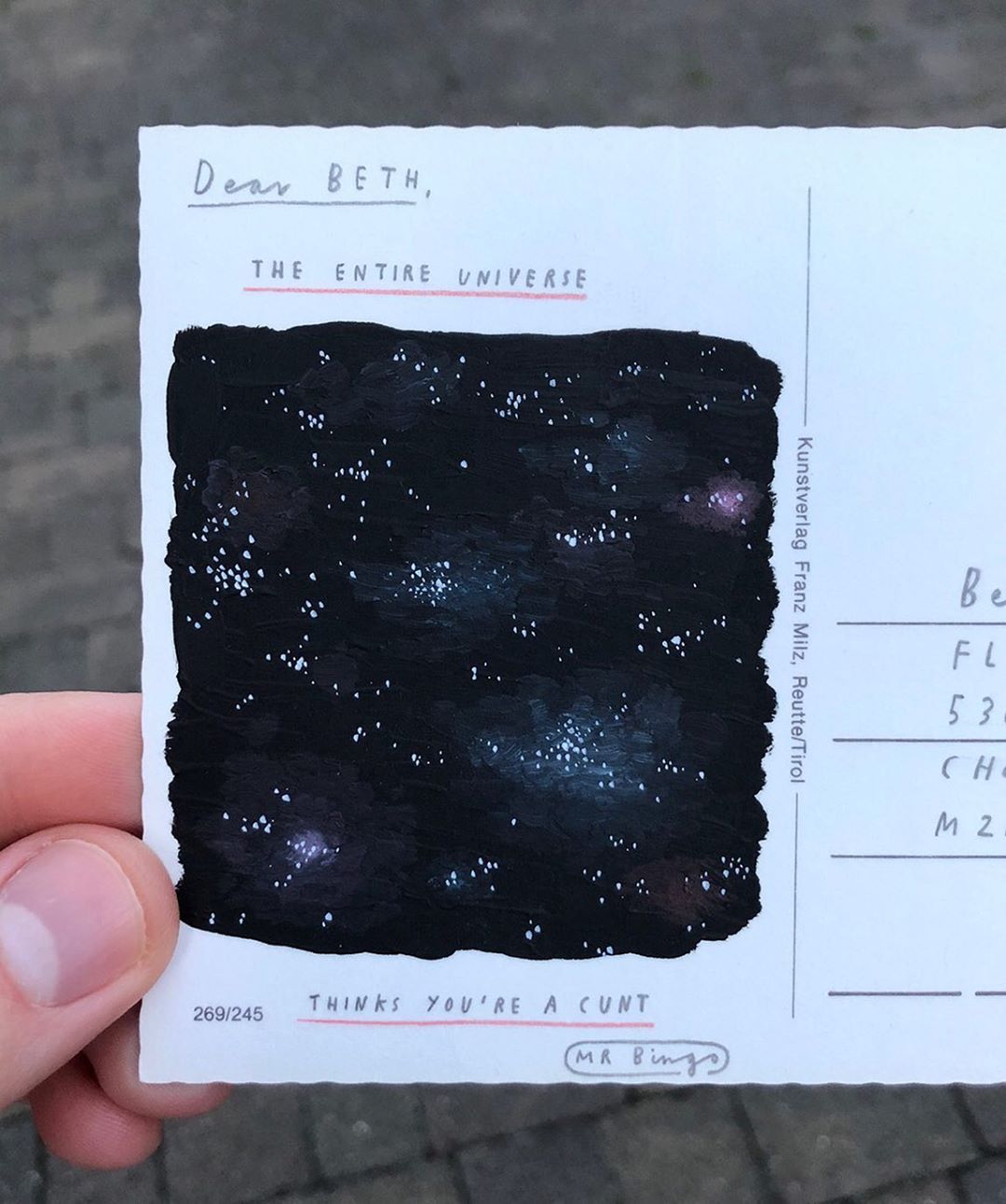 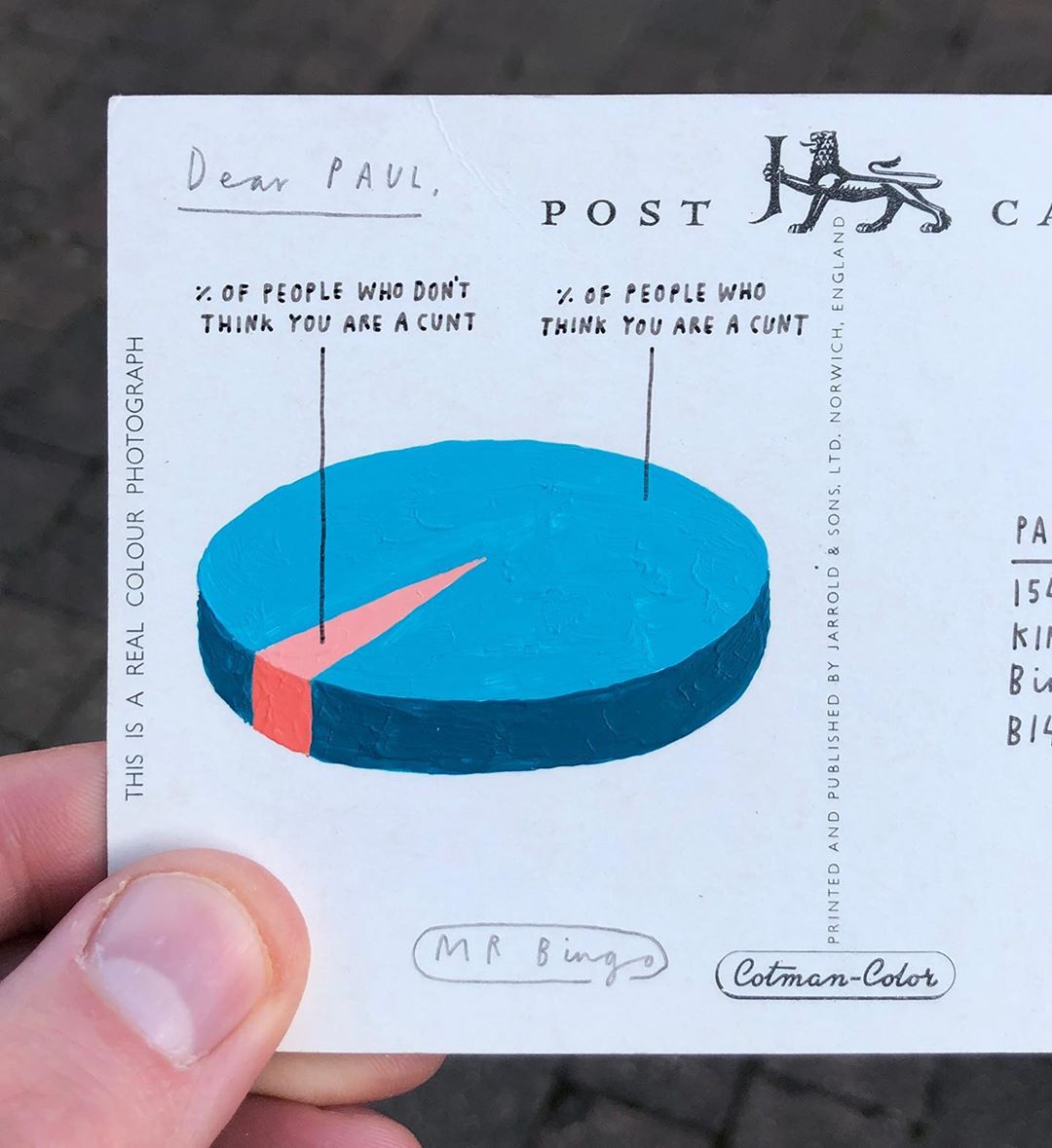 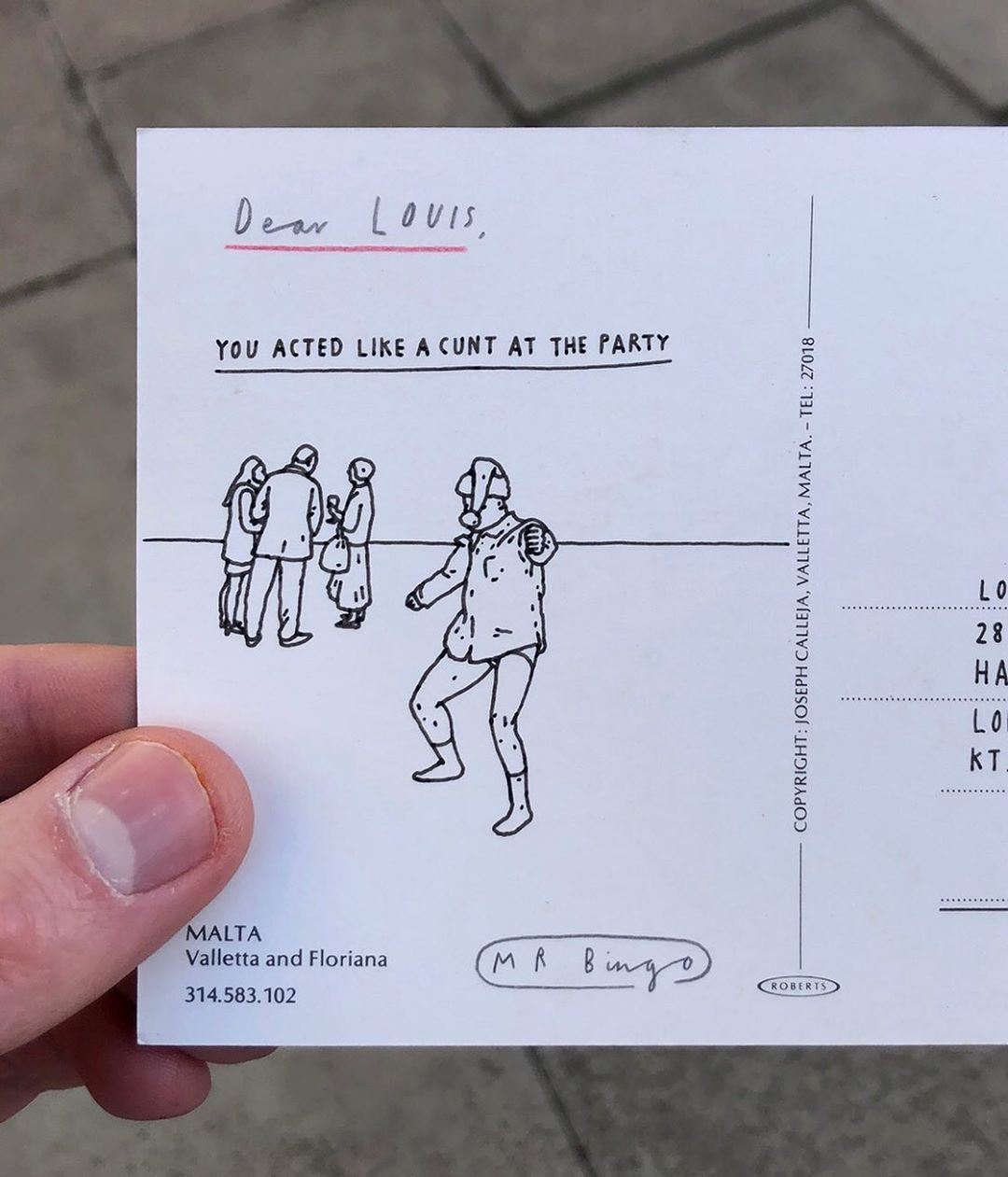 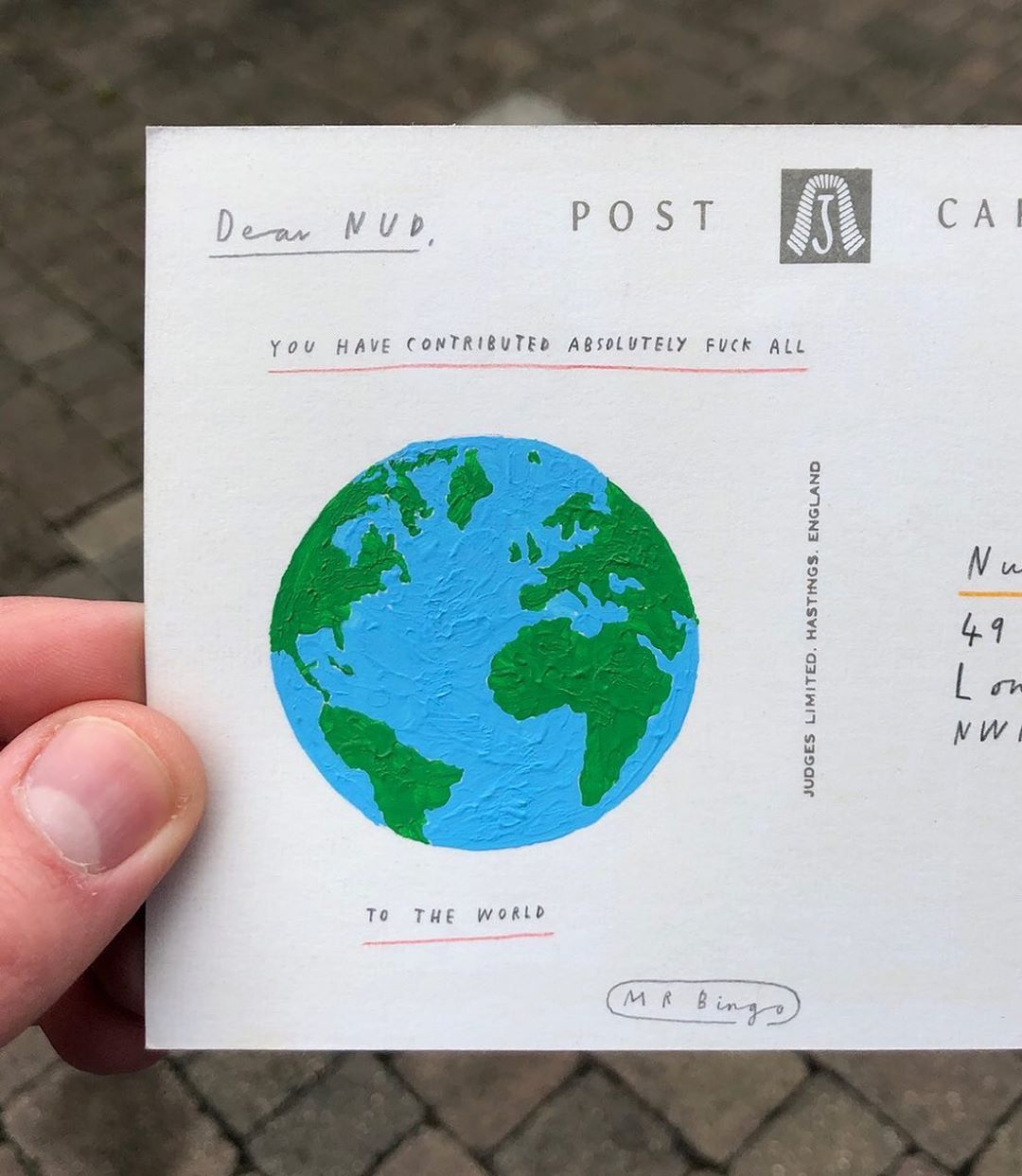 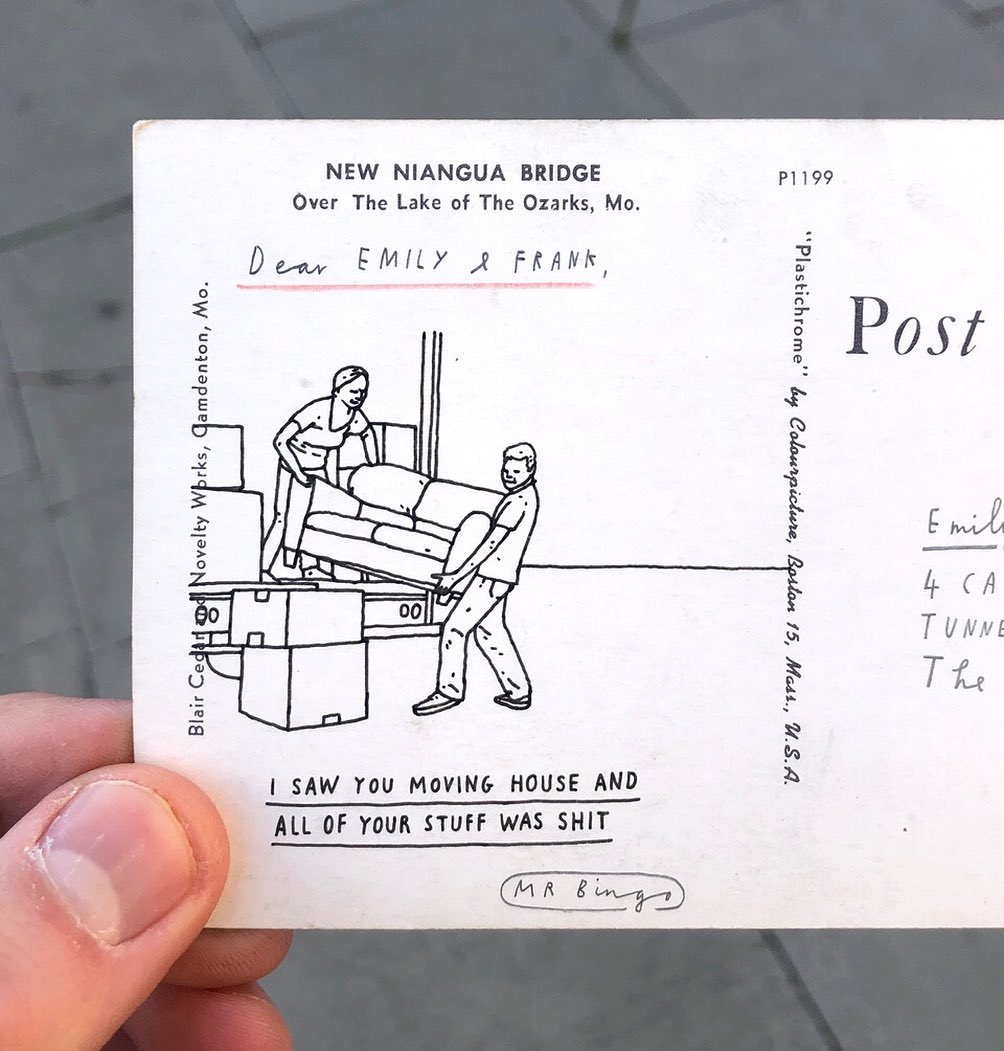 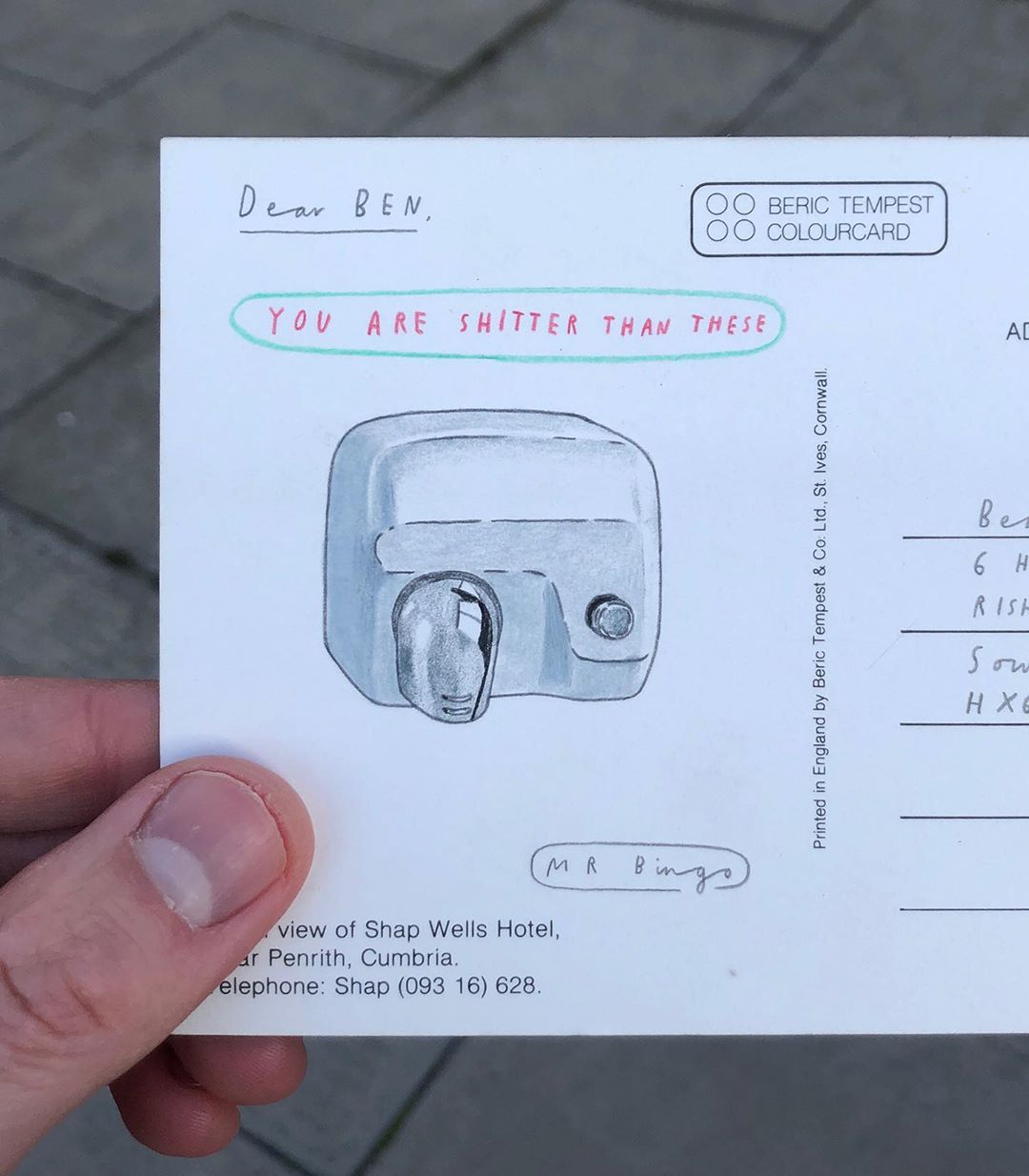 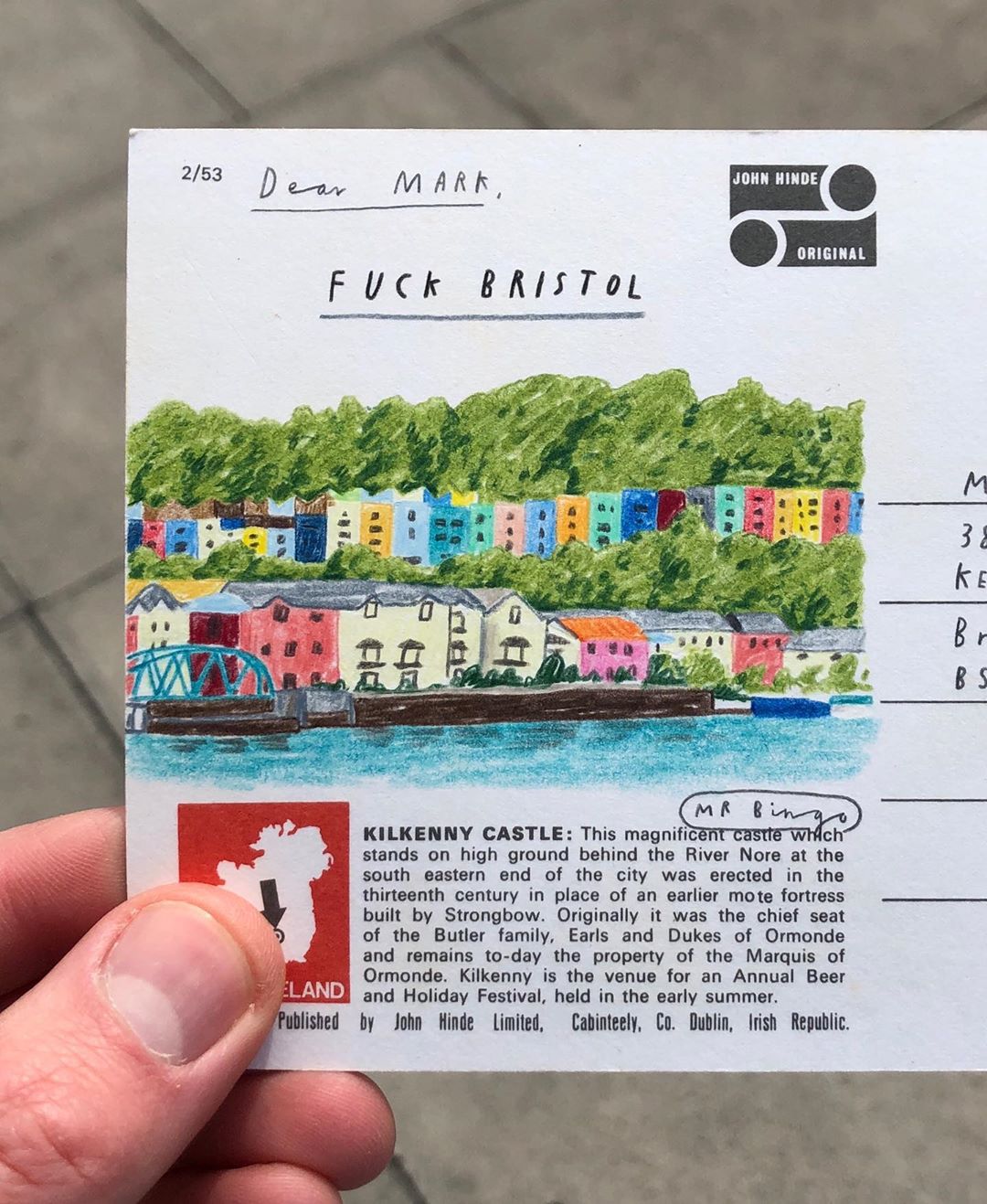 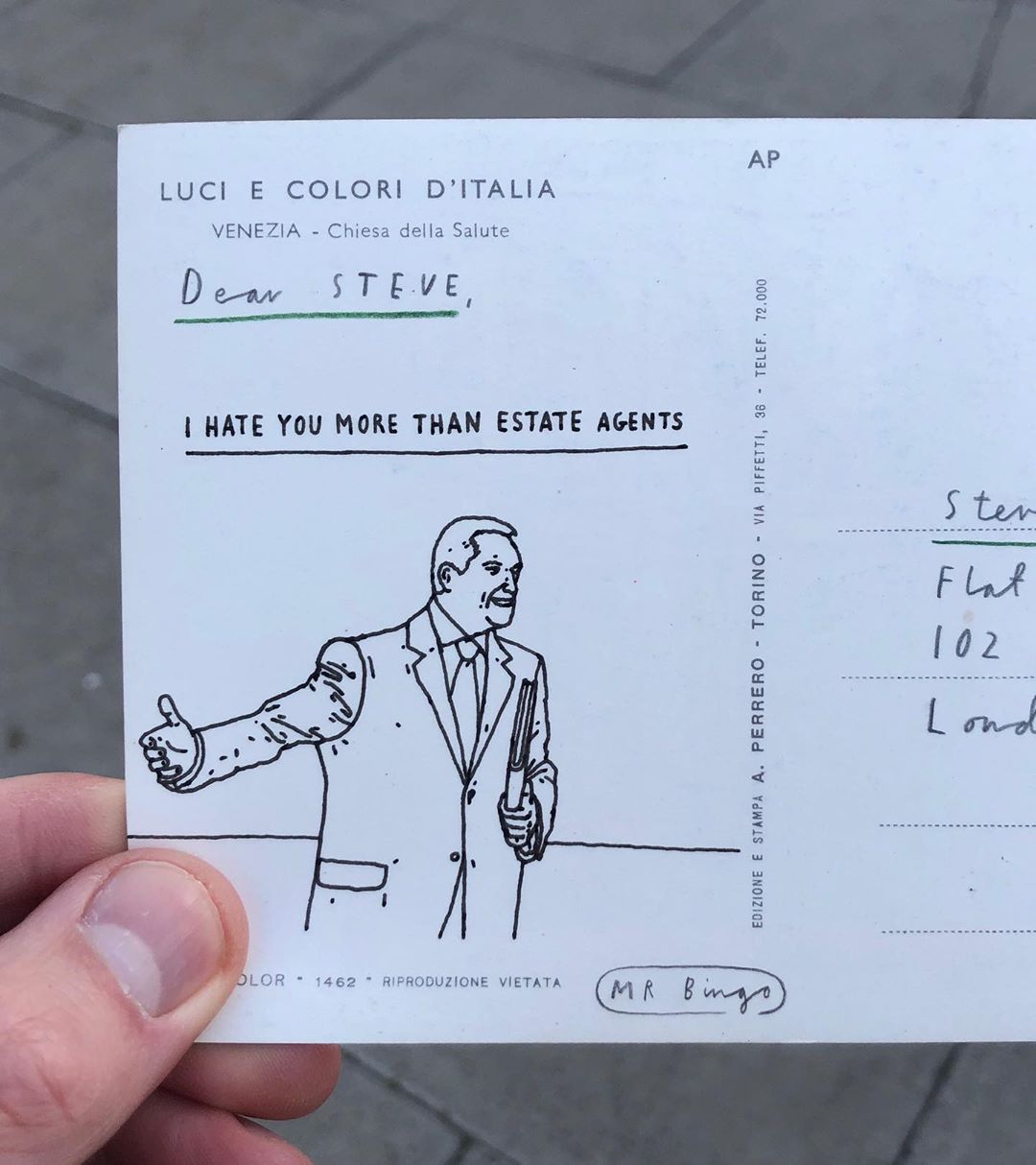 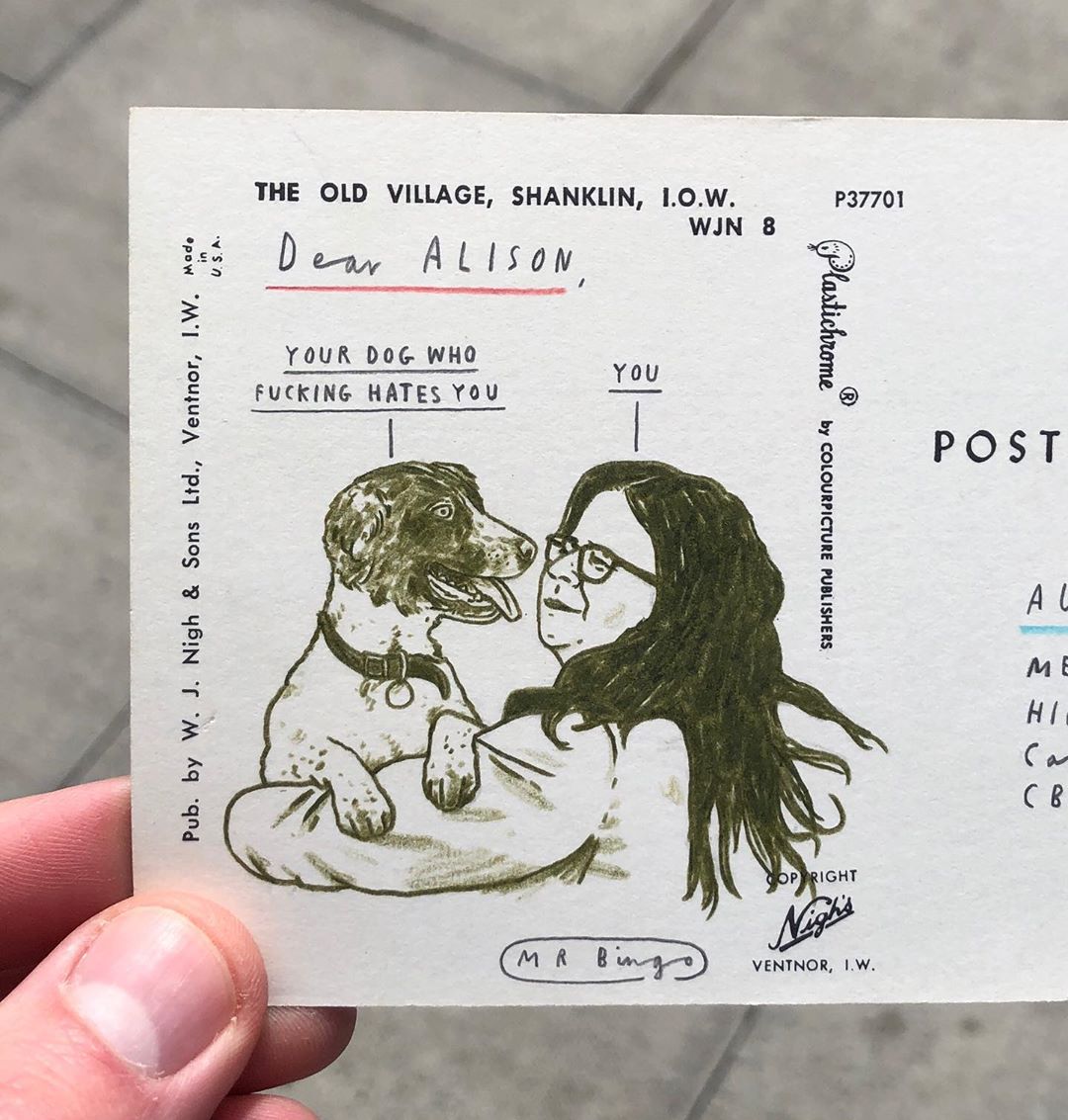 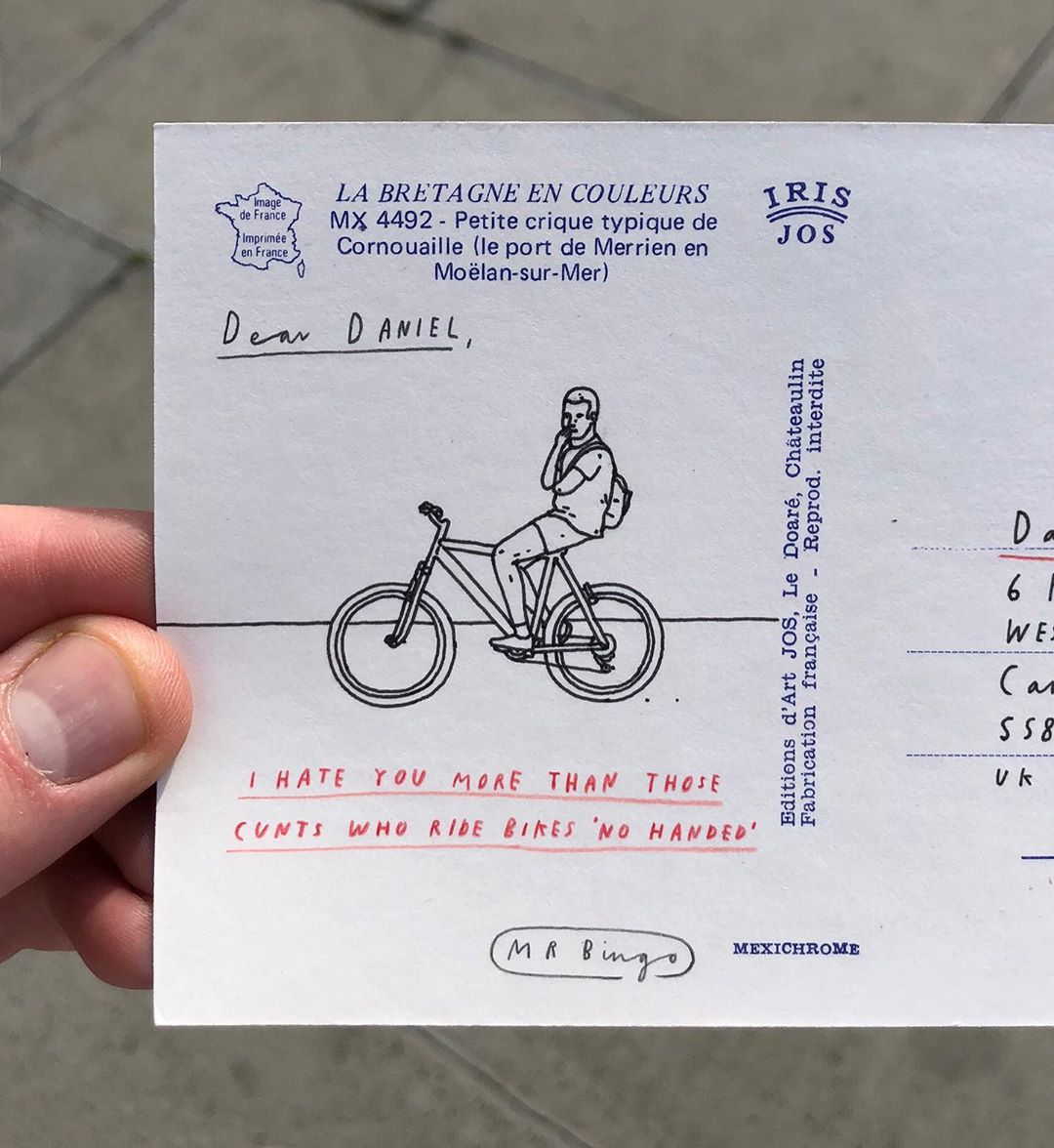 Better Batman Than You: The Superb Comic Illustrations By The Malaysian Artist Kael Ngu
Swedish Artist Creates Beautiful Monochromatic Hyperrealistic Drawings
Young Artist Documents Her Daily Struggles Of Learning To Draw
1,252 Floating Balls Form An Eye When Looking From The Right Angle
Baker Kat Thek Trolls Donald Trump With Cakes That Use His Own Words
Artist Illustrates What Spongebob Characters Would Look Like As Humans
"Heaven's Hell": The Book Of Afterlife Adventures By Anthony Jones
This Is What Disney Princesses Would Look Like If They Were Renaissance Women
"Unwanted Discovery": Stunning Digital Artworks of Kybereality
The Robot Next Door: Playful And Visionary Series By Nicolas Bigot, Niko Photographisme
Days Of Future Past: Natural Act Collages By Merve Özaslan
Artist Creates Animal-Themed Watercolor Paintings That Glow In The Dark
A Wandering Into The Fascinating Sketchbook Of Russian Artist Elena Limkina
These Photorealistic Renders Look Like Real Photos Taken with An Old Camera
Banksy Painting 'Self-Destructs' Moments After Being Sold In London
Smart Social Advertising That Will Make You Look Twice
Theater of The Bauhaus: An Illustrated Guide to Total Art from 1925
Robots And Donuts: The Amazing Retro-Futuristic Art Of Eric Joyner
Imaginary Camouflaged Leaf Insects Painted By Takumi Kama
"Forever Alone": Superb Editorial Illustrations By Angelica Alzona
Prada Marfa: The IIlegal Roadside Ad
Kids Make The Best Protest Signs
This Artist Duo Uses Face As A Canvas To Recreate Famous Classic Paintings
Fashion In Early Photography – Glamorous Photos Show Female Models In Victorian Era
hate, mail, postcards