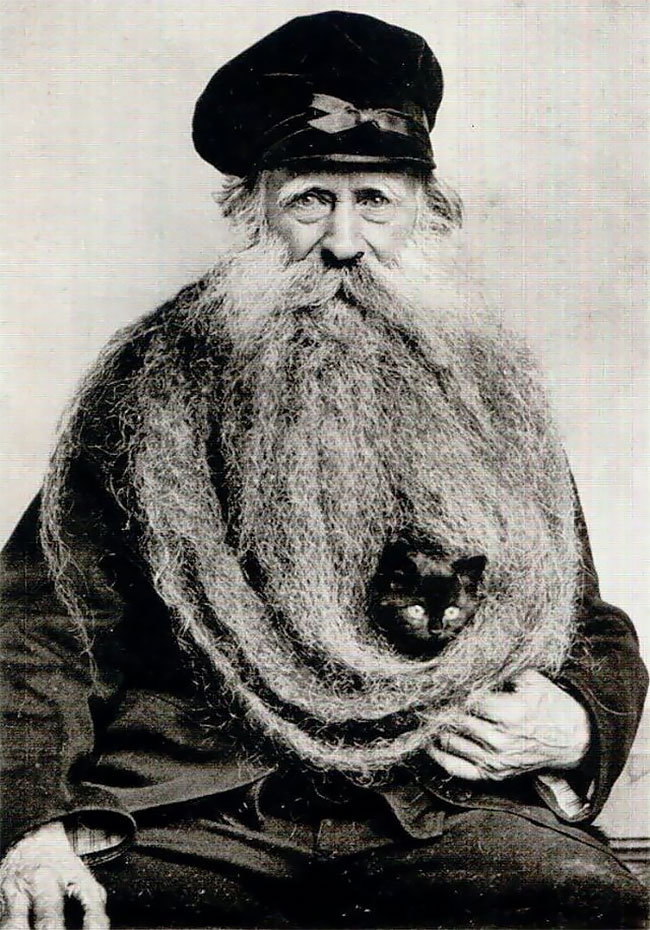 Born on February 26, 1826 in Vandenesse (Niève), Louis Coulon was a “cast iron moulder” at the Forey factory in Montluçon. Apparently, he was already shaving by age 12 but could not maintain the sharpness of his razor blade from its frequent use. In fact, his beard was growing so fast that by age 14, Coulon already had a 50 centimeter (19.6 inch) beard. From then on, it was just a matter of letting it grow to monstrous length. 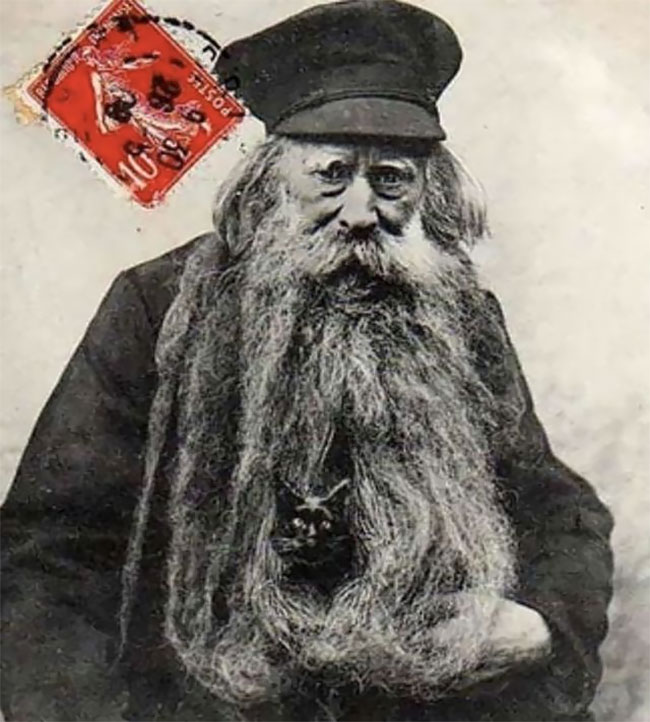 Even if Coulon attained a somewhat famous status, he remained humble, even refusing a lord William’s offer of 10 000 franc to travel. He was featured on many postcards, one in particular stating that his beard was 3.3 meters (11 foot) long as of May 10, 1904. 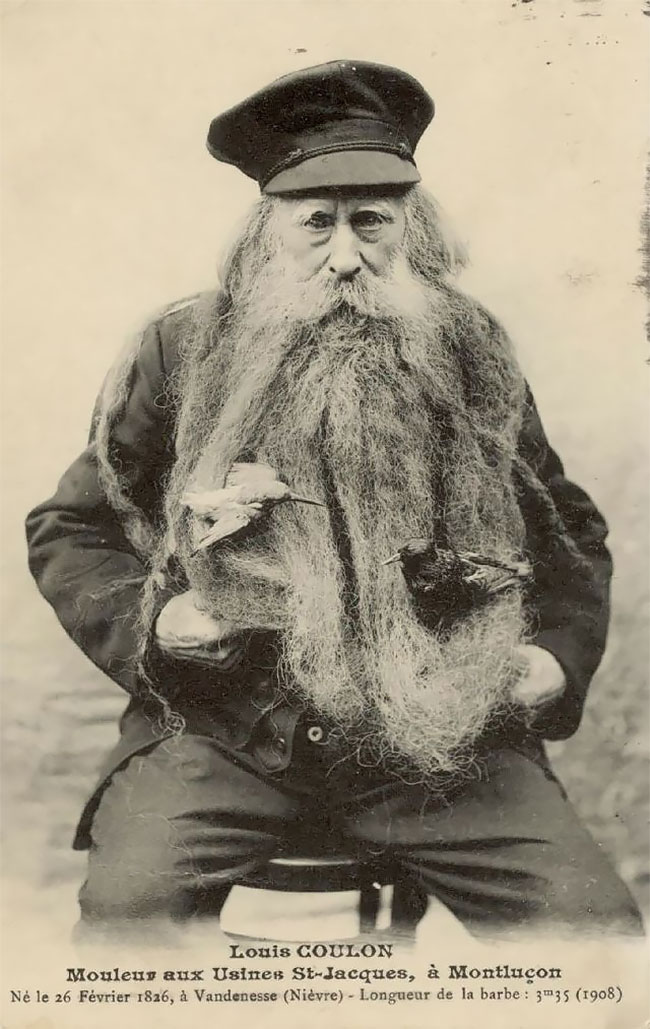 Surprisingly, this beard is not considered the world record: that title belongs to Sarwan Singh of Canada, having a 2.37 m (7 ft 9 in) beard. To Mr. Singh’s defense however, there were no Guinness World Record judges prior to 1954… Let us hope, however, that Coulon’s beard will one day be vindicated! 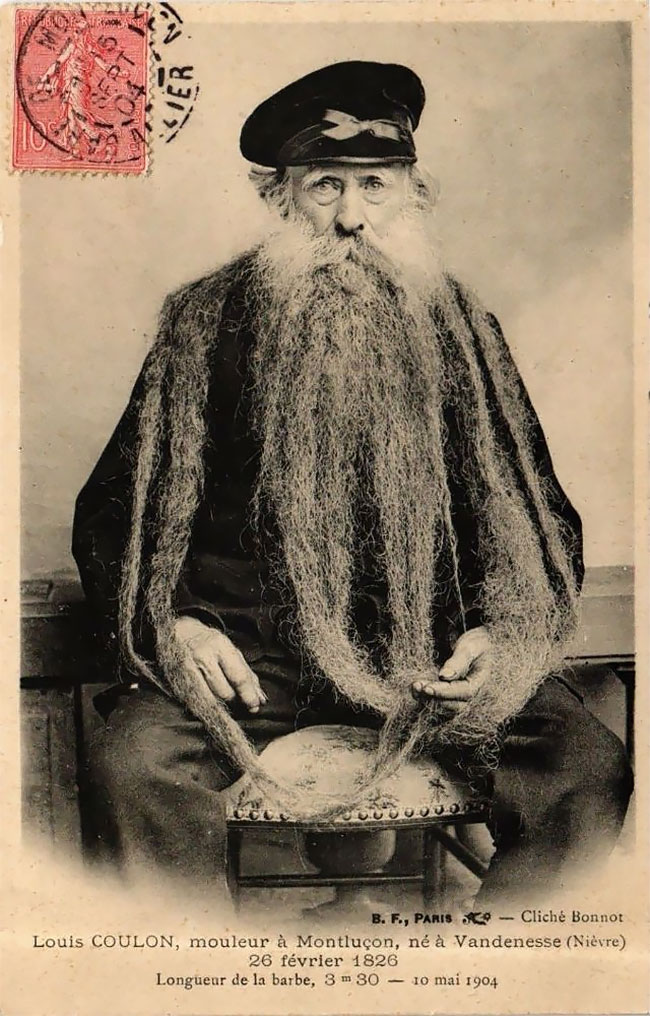 But the fact remains, as amazing as Coulon’s hirsute look is, it just wouldn’t be complete without his fuzzy little companion! 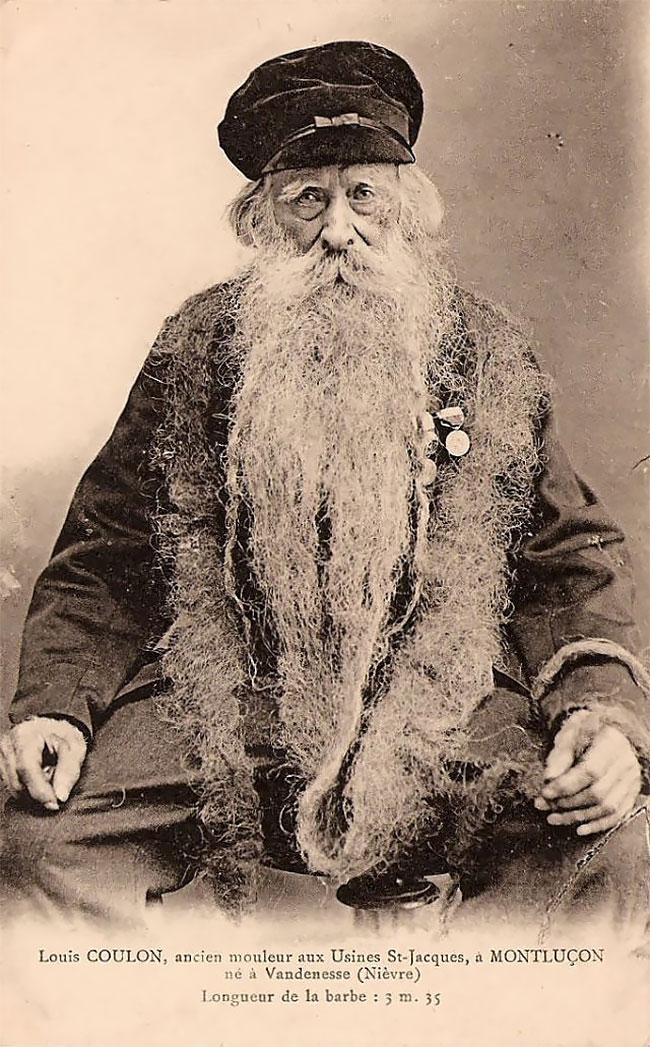 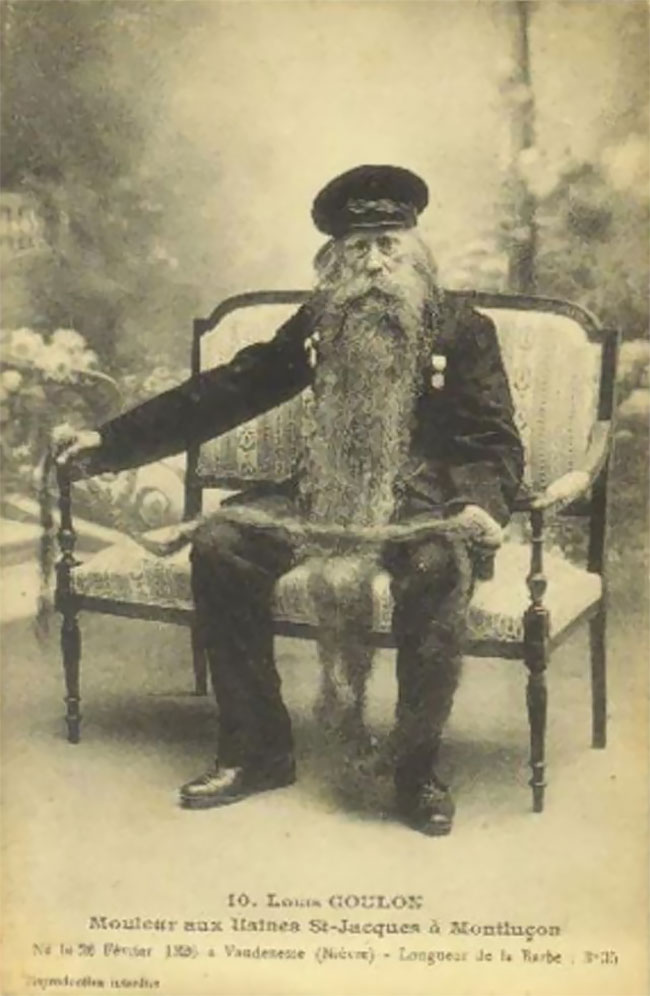 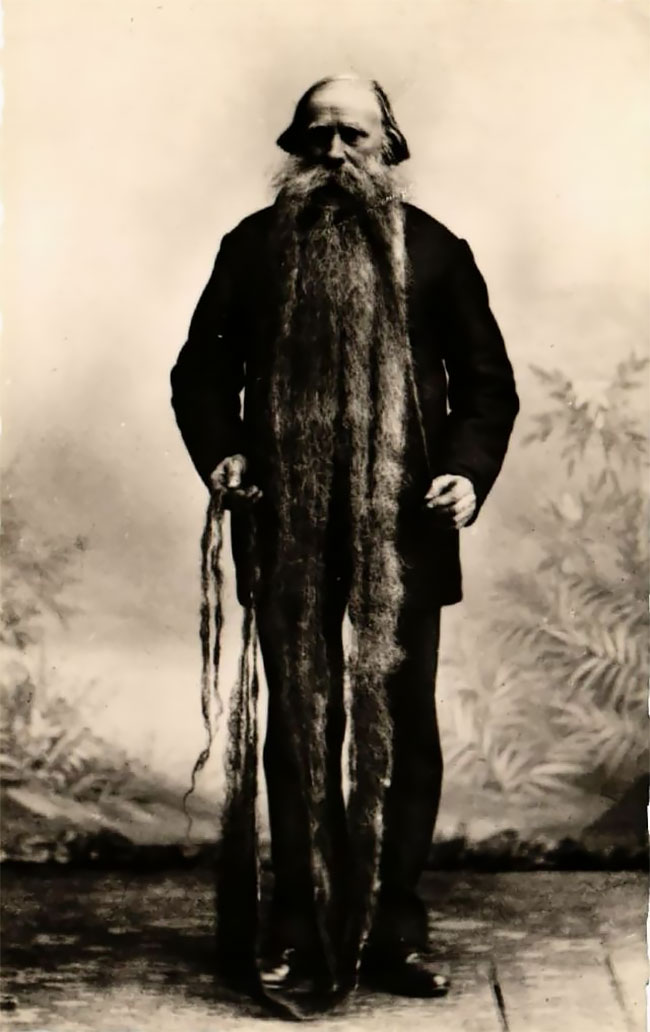 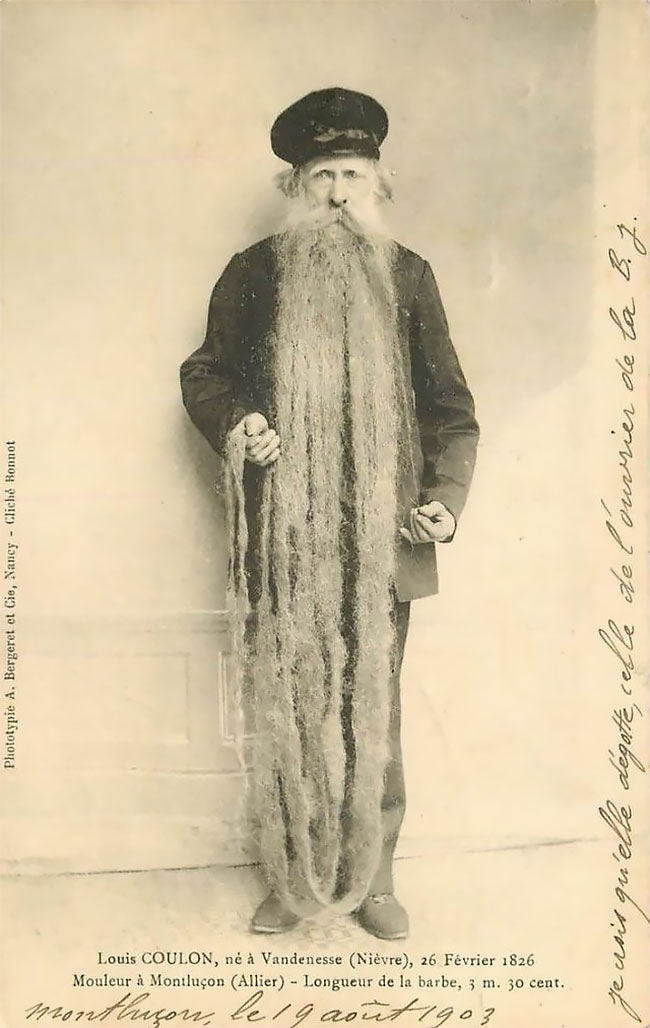 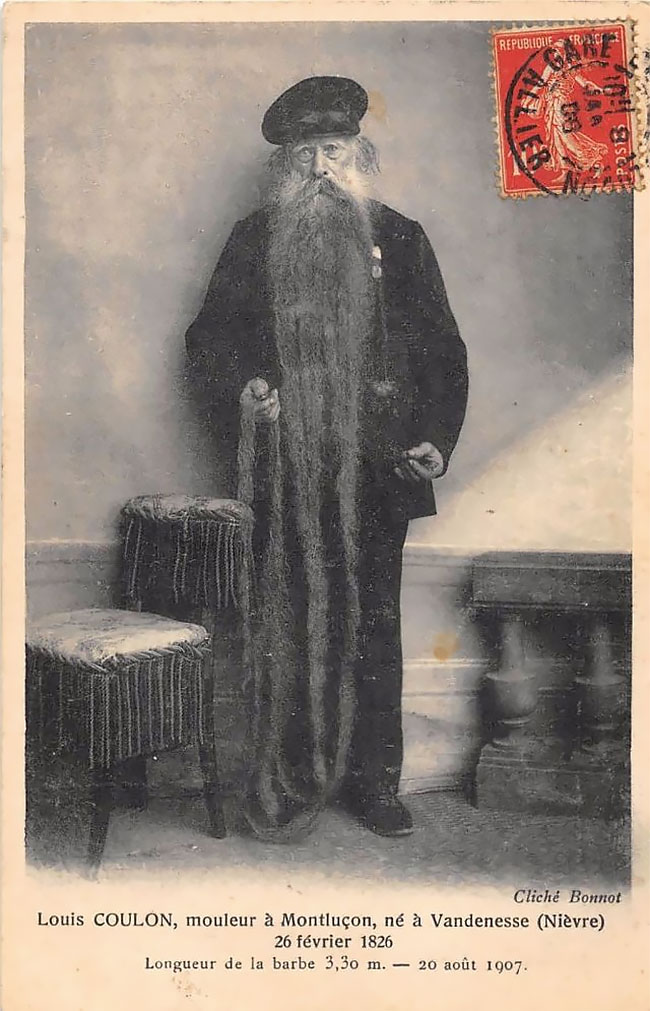 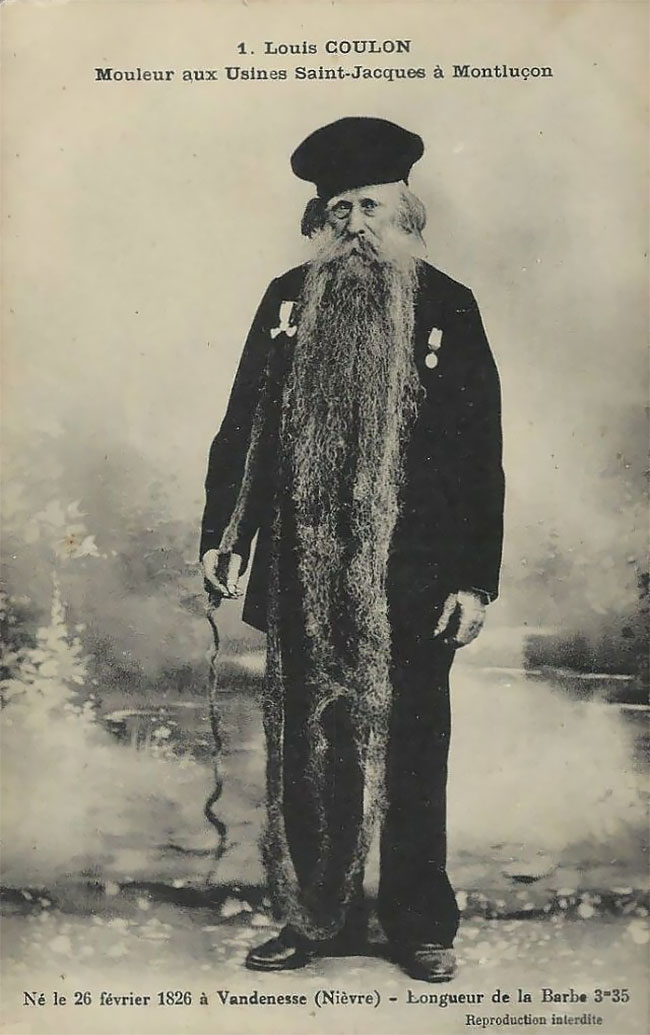 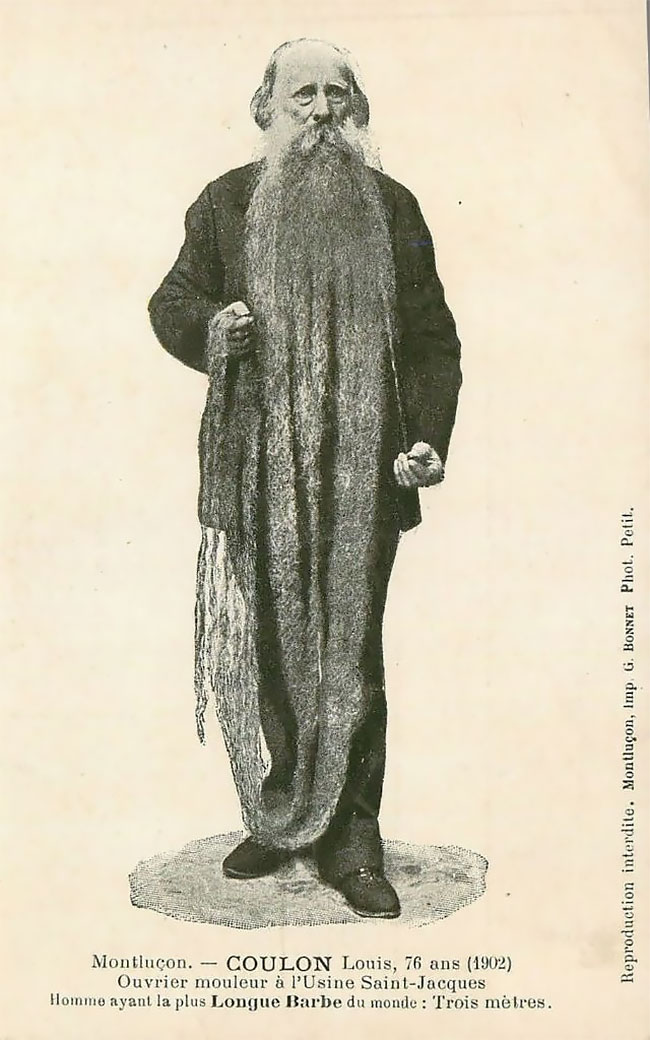 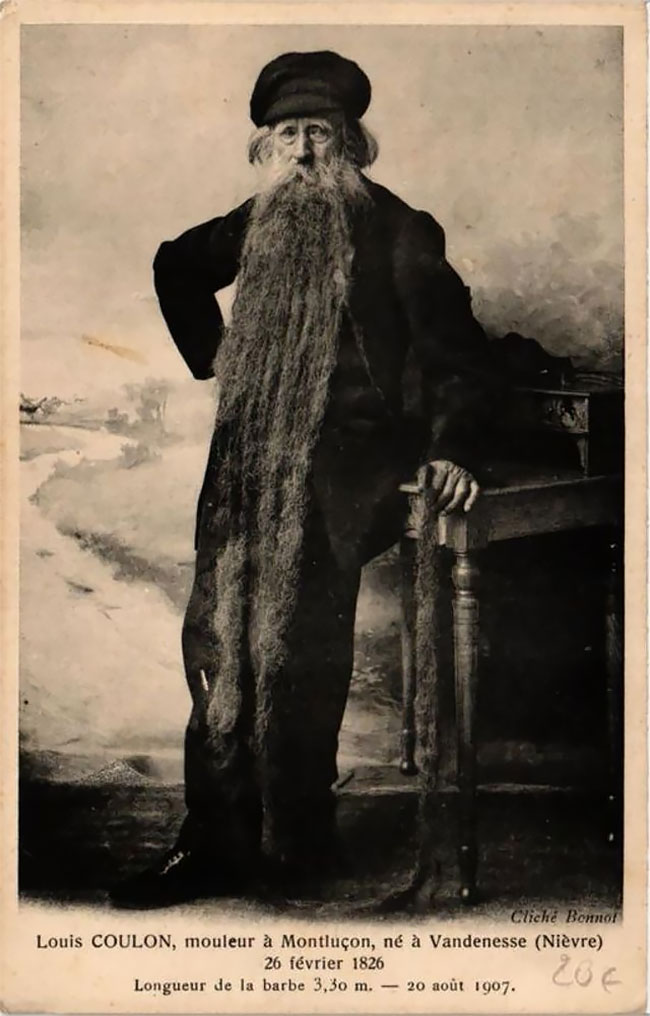 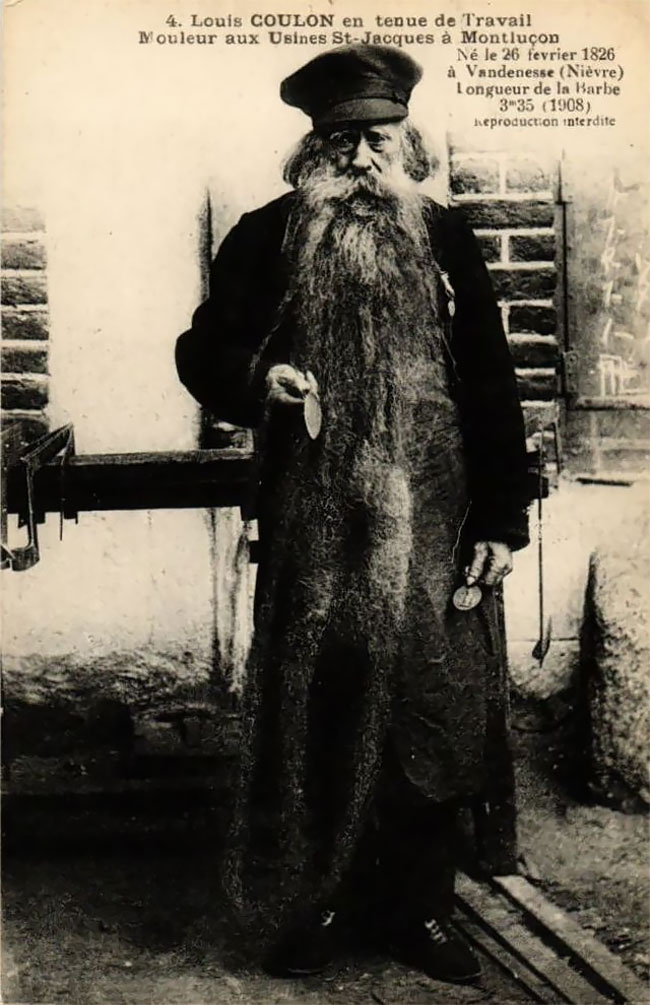 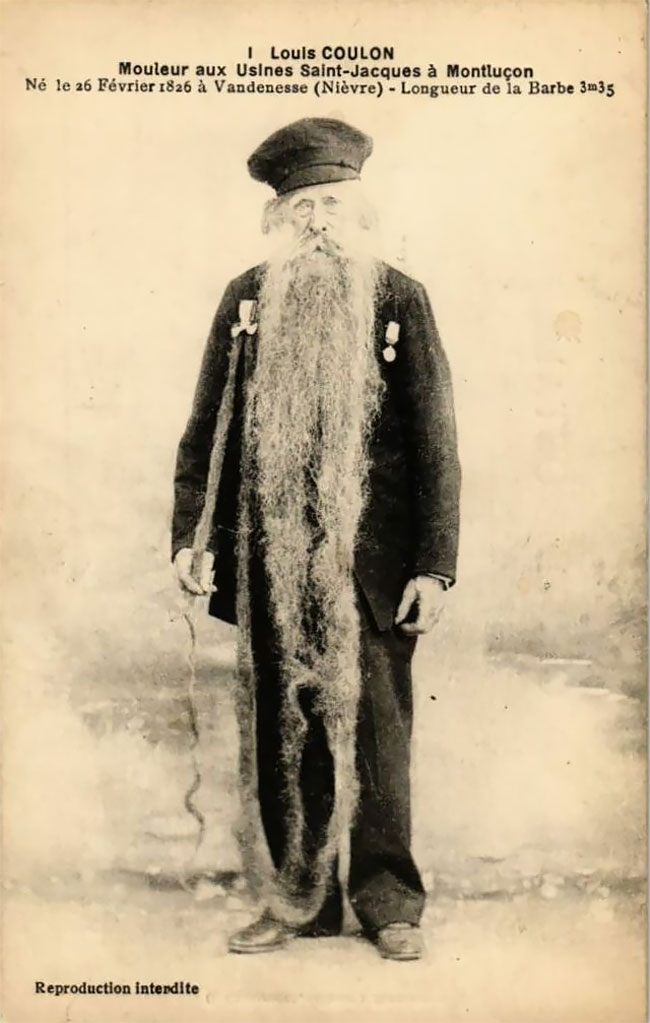 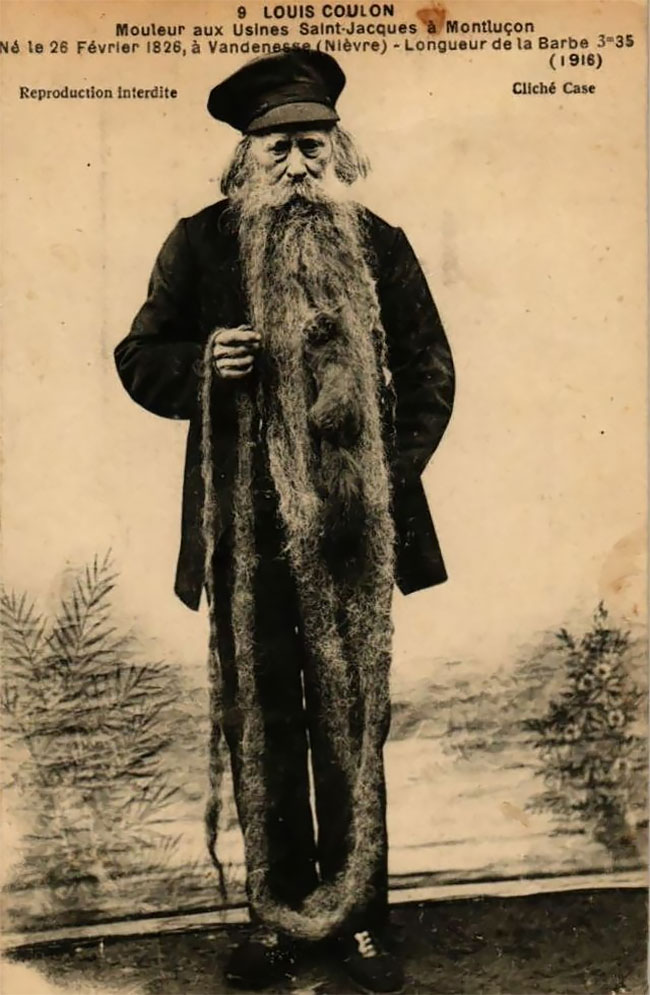 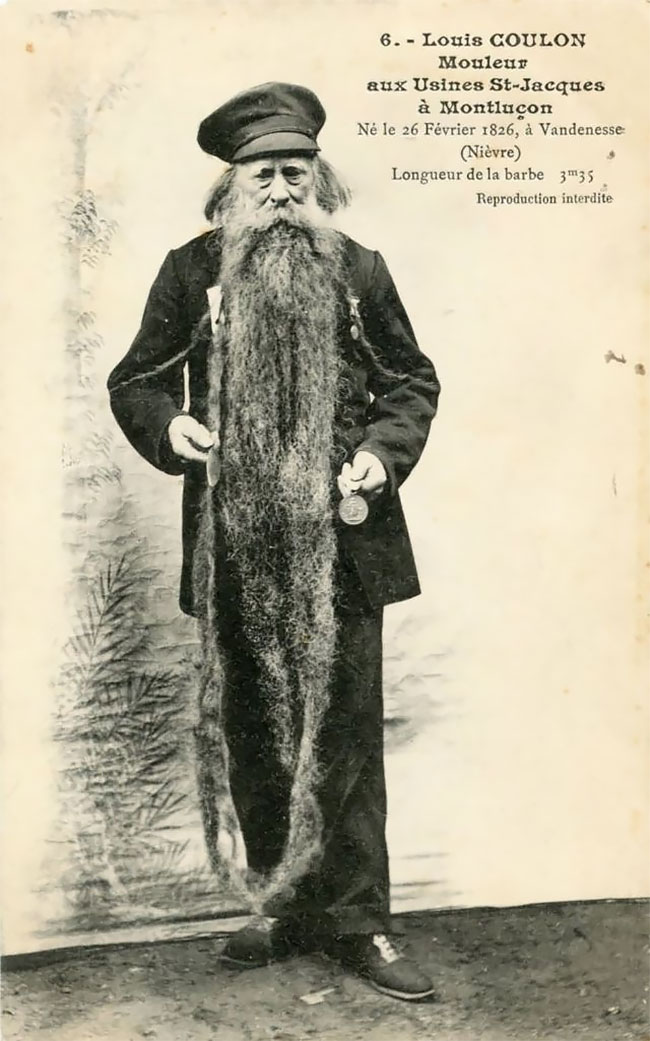 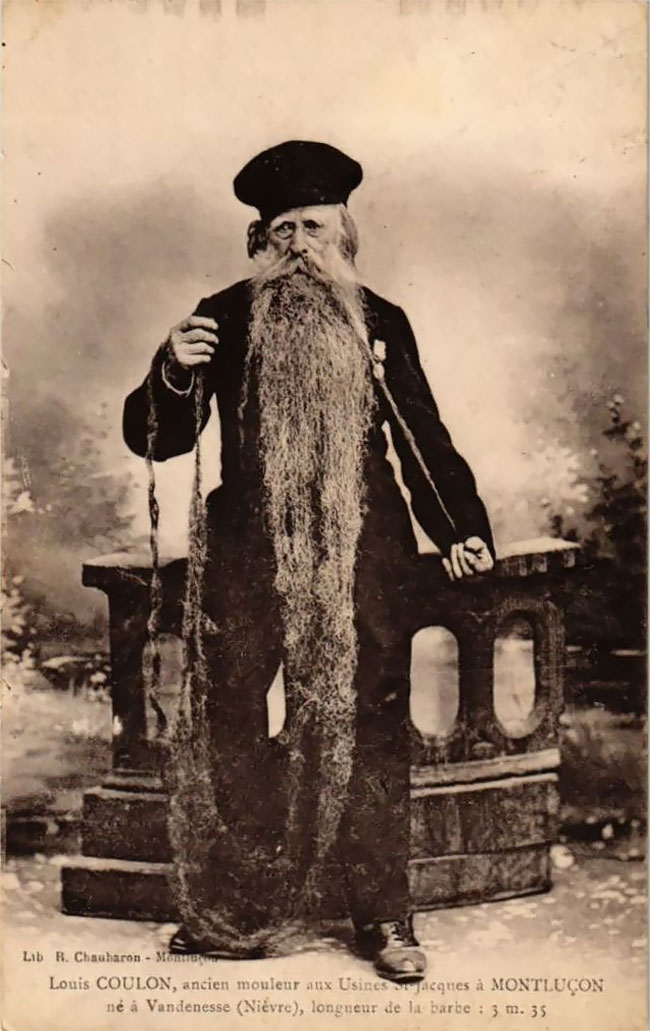 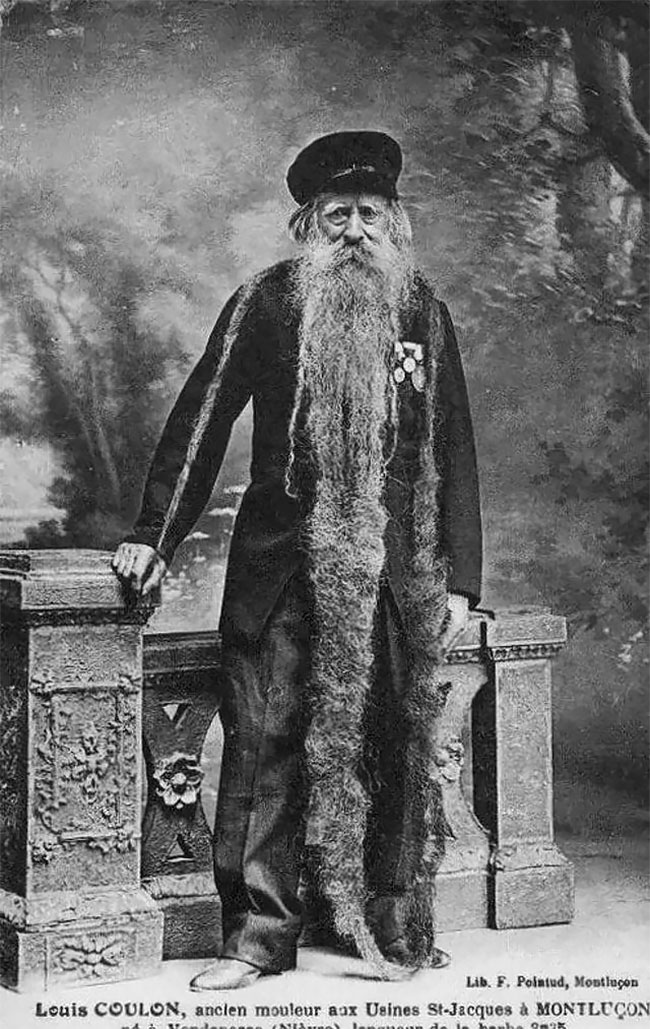 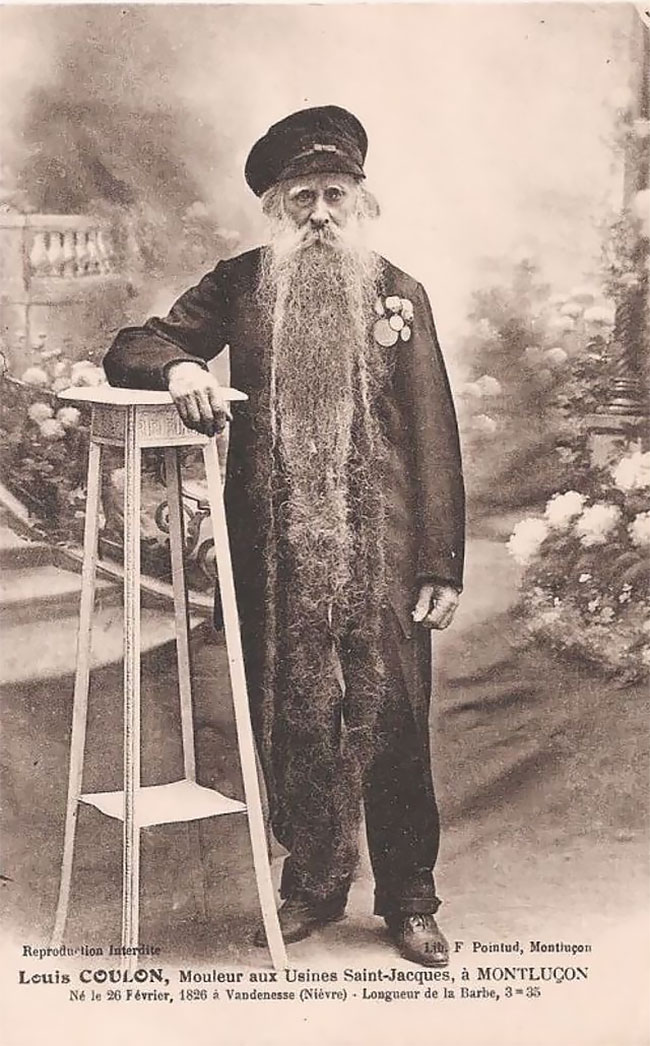 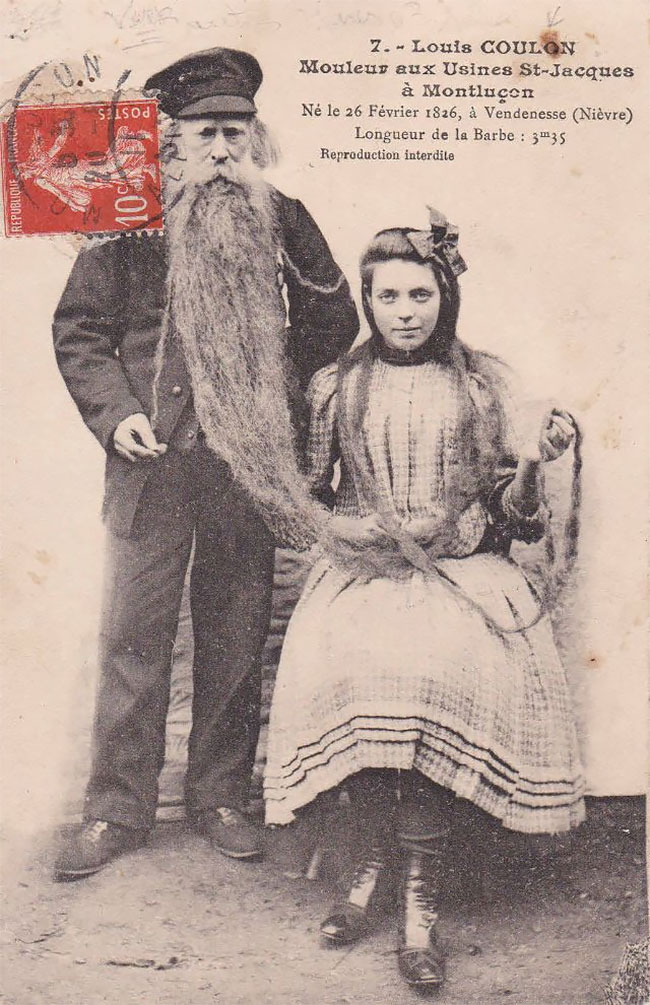 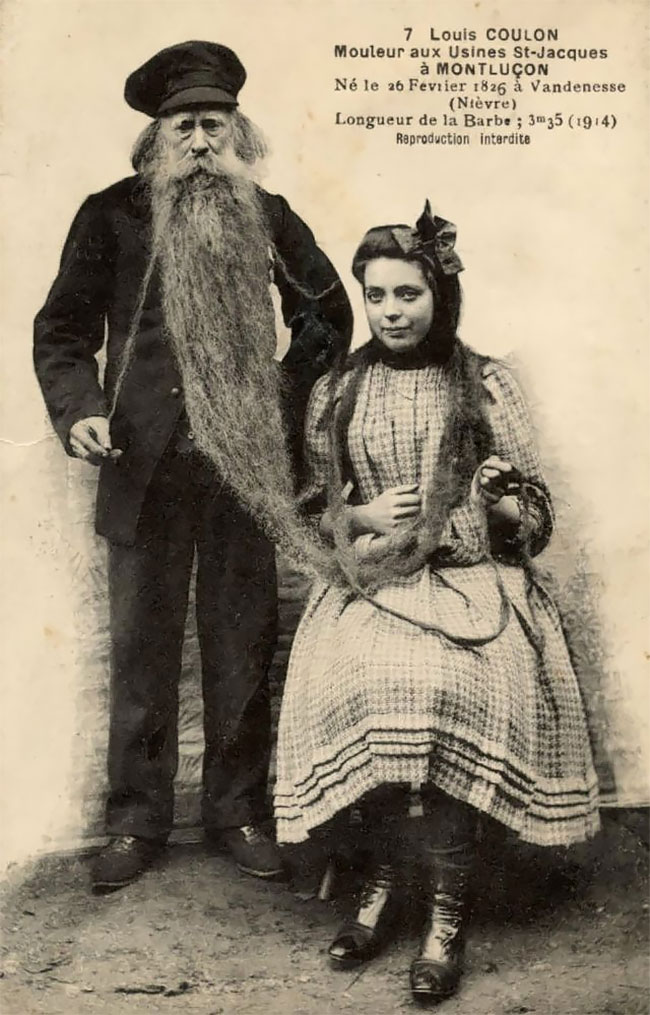 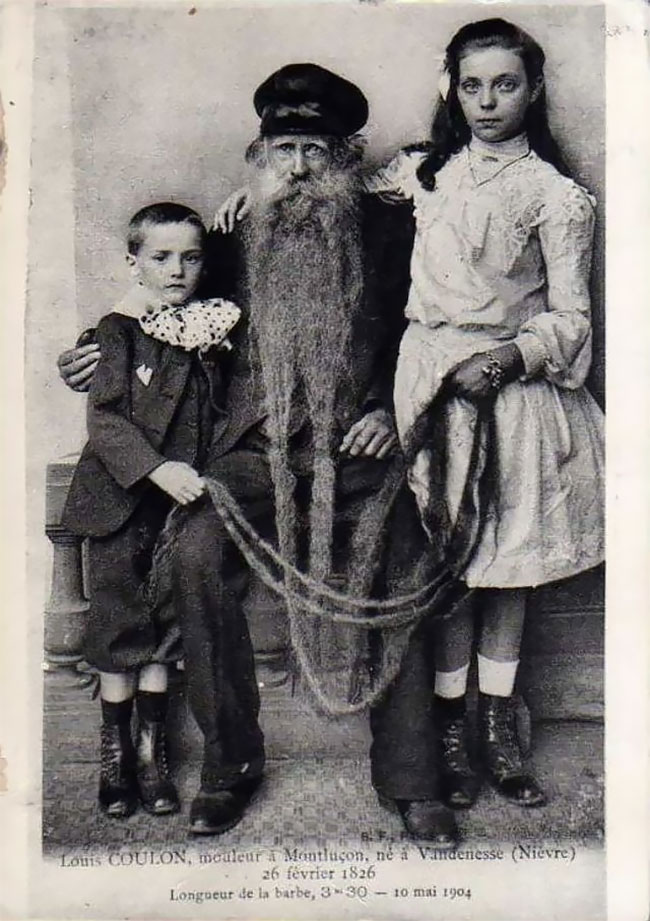 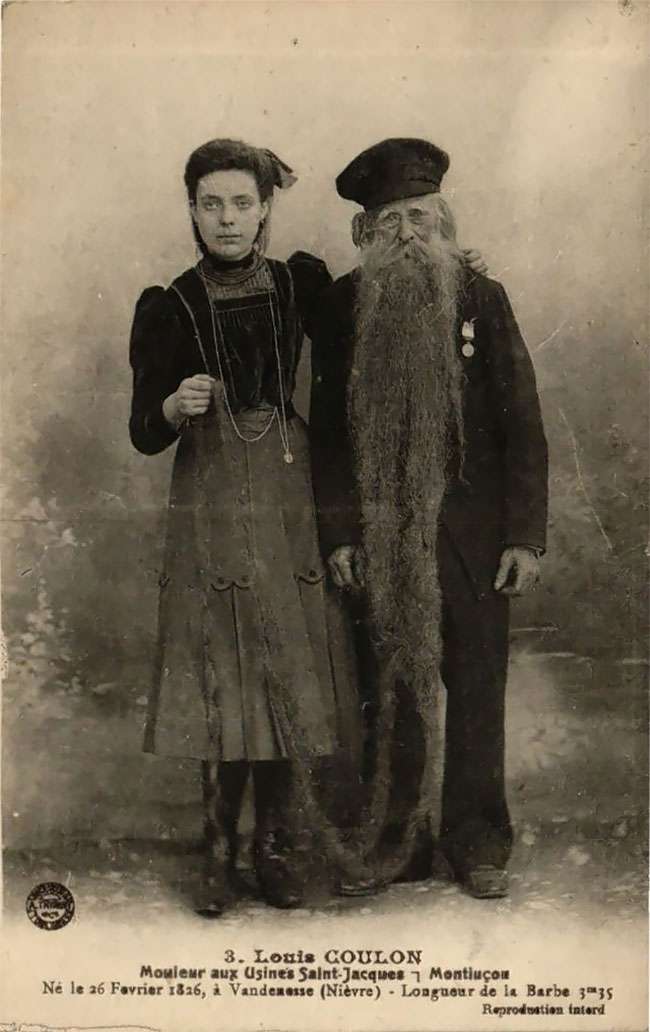 Taylor Wessing Portrait Prize 2015
The Dead City Of Pripyat Now Has A Christmas Tree!
"Desperate Dreams": Awesome Retro-Styled Illustrations by Karolis Strautniekas
"The Neon God We Made": Filipino Photographer Explores Cyber Manila in Neon Noir
The Photographer Terry O’Neill Is Eighty
1938 Buick Y-Job, the World’s First Concept Car
35 Vintage Cosplay Photographs Reveal How Awesome We Used To Be In The 1970s
Dressed Cats: Postcards From The 1950's By Artist Eugen Hartung Published By Alfred Mainzer, Inc.
Wearing Futuristic Protective Suits, Washington State Crews Destroy First US Murder Hornet Nest
Famous Kitty: Cute Illustration Series by Effy Zhang
London in 1982: Among the Sloane Rangers, New Wavers And Everyday People
Emotional Backstage Portraits of the Emmy Awards Nominees
Beautiful 1980s Portraits Capture The Vibrant Residents Of A Single East Berlin Street
On His Own: Stunning Minimalist Photo Series By The Photographer Paweł Franik
A Matter Of Trust: The Mystery Soul Of 'Inner' Russia In Wonderful And Sentimental Photographs Of Vugar Mamedzade
Photographer Took Photos Of Strangers In The 1970s, And When 20 Years Passed, He Set Out To Find Them Again
Photographer Asked Celebrities To Reveal Their Public And Private Personalities In Intimate Double-Portraits
Rosie Hardy Escapes Into Fantasy Worlds Through Her Self Portraits
Fantastic Conceptual Photography by Megan Christine
Toy Jared Middleto Photographer Uses Practical Effects for Amazing Action Photos
Magical Photos Of Early Spring In Japan Captured By Hidenobu Suzuki
Beautiful Ethiopian Headwear Made From Your Trash
Photographs of Excited Dutch Boys Hanging on a Moving Train After the Liberation, 1945
In 1898, Revolutionary French Artist Toulouse-Letrec Went To The Toilet On A Beach, His Friend Took These Photographs
beard, cats, nest, retro

Woman Stages Very Intimate Postpartum Photo Shoot To Build Back Her Body Confidence After Having 3 Babies In One Year
Stunning Photos of Cher Taken by Richard Avedon for Vogue in 1966
Photographer Brings Children’s Dreams To Life In Magical Photos
Vibrant And Moody Urban Photos Of Vancouver By Mado El Khouly
Before The Computers: Looking Back On Typewriters Era
Beautiful Photos of Fiat X1/9, One of the First Truly Affordable Mid-Engine Sports Cars
NASA Captures Unique Elephant Face Image On Mars
"Someone Else's Dream": ’80s-Inspired Illustrations by James White
The Unique Hairstyles of Jean-Michel Basquiat
This Time Travelling Instagrammer Got Stuck Somewhere In The 1950s
2007 ‒ 2022 by Design You Trust. Proudly hosted by WebHostingBuzz.
Privacy Policy · Terms of Service · Content Removal Policy ❤️ 🇺🇦