The other Side of Bengaluru – India’s IT capital

Bengaluru (formerly Bangalore) has become synonymous with a booming technology sector that has created vast wealth for many. Yet the rapid growth of the technology industry in the city known as ‘India’s Silicon Valley’ has barely touched the lives of the 2 million people who live in poverty. Simon Murphy documented their daily experiences. 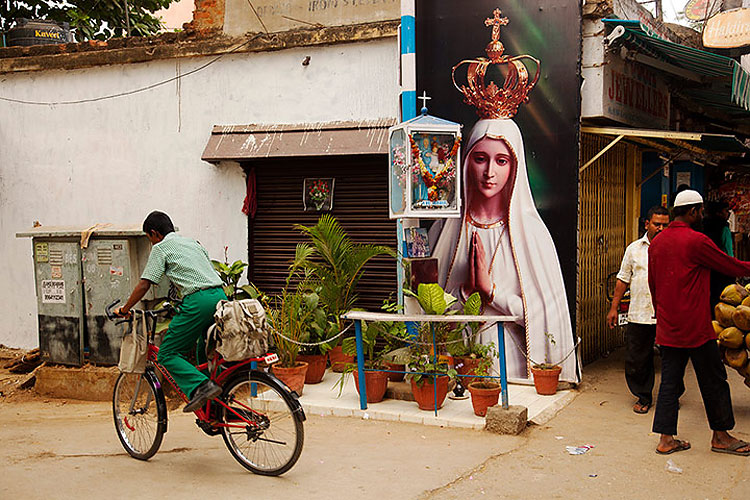 A boy cycles past a shrine to the Virgin Mary on his way to school in Bengaluru (formerly Bangalore). According to the country’s official census, just 2.3% of India’s population is Christian, compared with 80.5% Hindu and 13.4% Muslim. 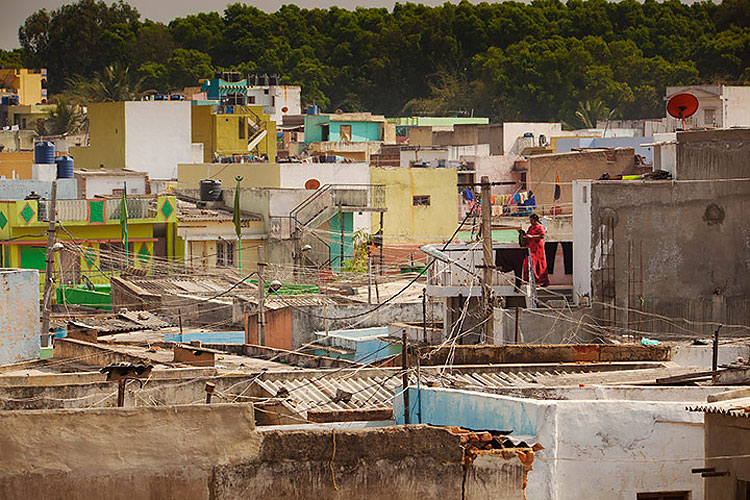 A slum dweller hangs out her laundry. Last year’s census showed the city’s population rose by 47% in just 10 years, making it the second fastest growing city in India, after Delhi. The reason for the rapid growth is the booming information technology sector: the Indian Institute of Science estimates that 30% of the IT workforce live in Bengaluru. Around a quarter of its 8.4 million people live in slums. 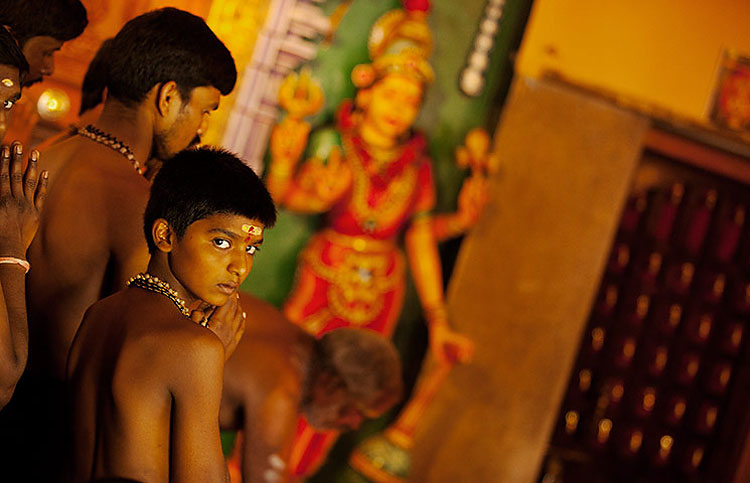 Children during a prayer ritual in a Hindu temple in a Bengaluru slum. 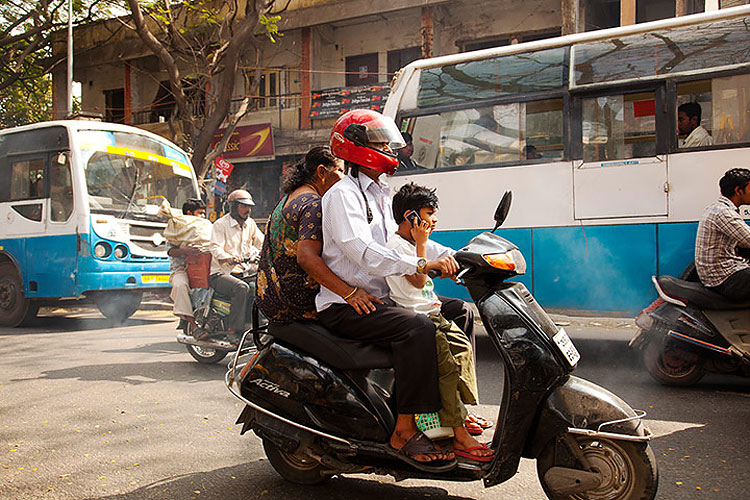 A family travels by scooter in the city. As India’s growing middle class buy more cars and scooters, traffic congestion is a serious problem in many urban areas. 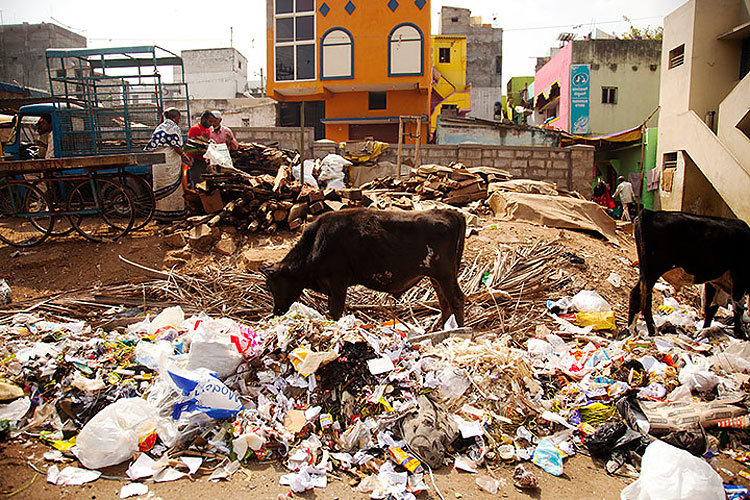 Cows roam the public garbage belt in the slums. The rubbish dumps across the city are a breeding ground for diseases. 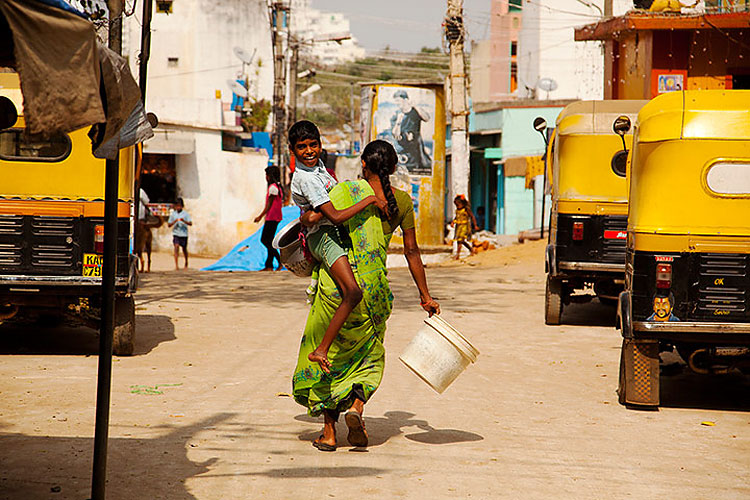 A mother carries her son, who is affected by polio, to fetch water. In February, India was finally removed from the WHO’s list of countries plagued by polio after decades of battling to eradicate the disease. But for the thousands of young people who have already been affected by the disease, it will determine their future. According to the UK-supported charity APD, an estimated 17 million people with disabilities in India do not receive support such as mobility aids. 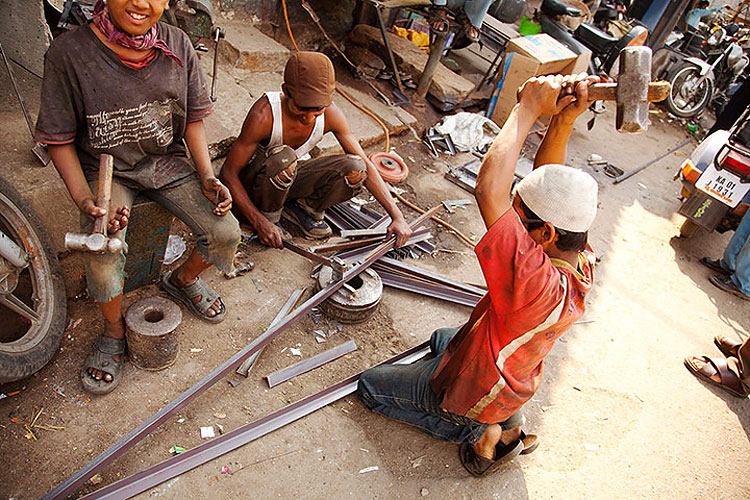 A child works in an iron workshop in a slum. Despite government efforts to provide schooling, many slum kids have to work to help provide income for their families. 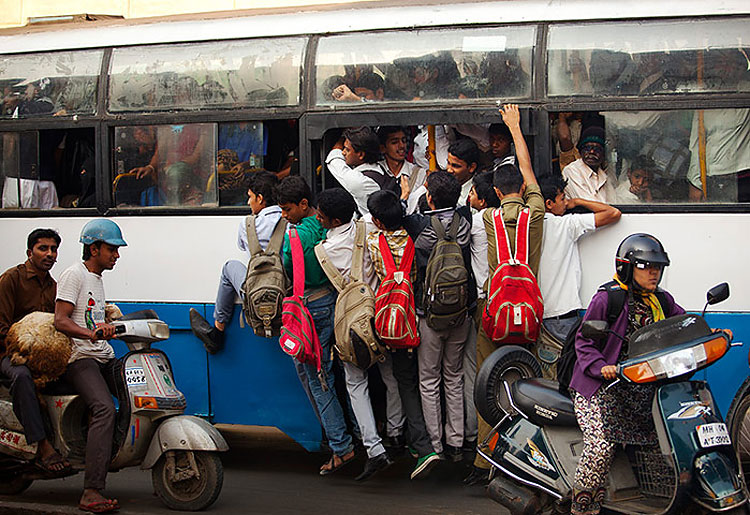 Children cling to a crowded bus as they make their way to school in the rush hour. 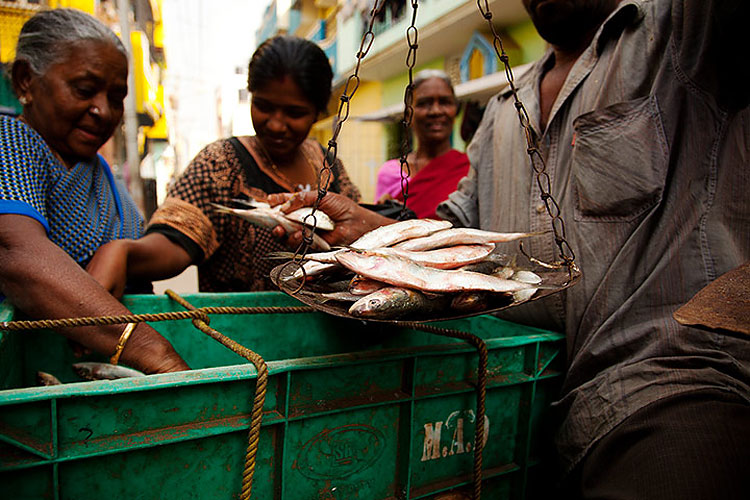 A woman sells fish in a slum. Informal labour still is the only means of income for the majority of the city’s residents. 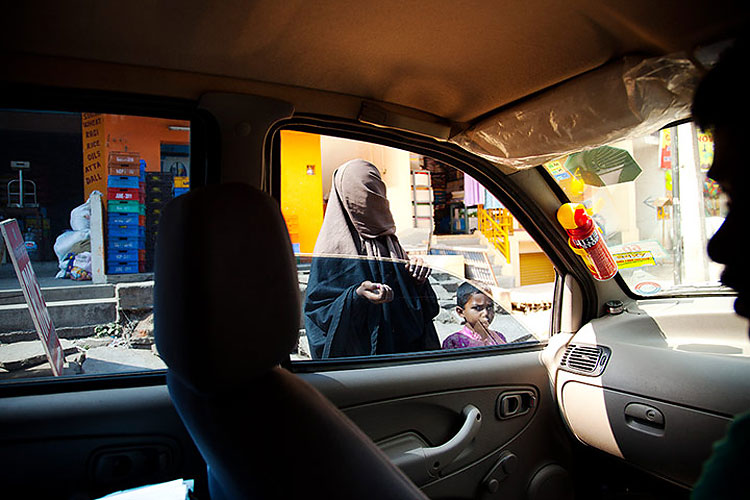 A Muslim woman and her son beg in the rush-hour traffic. In its latest country overview of India, the World Bank warned: ‘India’s integration into the global economy has been accompanied by impressive economic growth that has brought significant economic and social benefits to the country. Nevertheless, disparities in income and human development are on the rise’.

The Lost Golden Age: Soviet Russia, As Seen By Photographer Vladimir Sokolaev
Photographer Perfectly Captures Captures Hidden Parallel Worlds Of Everyday Puddles
1920s Fashion Through The Lens Of Police Mugshots
These Photo Portraits Of People Watching Porn Are Funny, Sweet And Very Awkward
Dubai’s Love Lake: Two Hearts in the Middle of the Desert
Abandoned Russia: Stunning Urbex Photography By Alexei Polyakov
A Junkyard Of Classic Cars Located In Rural Georgia
London: Stunning Photographs By Clement Merouani
100-Year-Old Negatives Discovered In Block Of Ice In Antarctica
"Captivate!": Fashionable 90s in Amazing Nostalgic Photos
"A Magnificent Sculptures By Nature": Otherworldly 'Earth Pyramids' Captured In The Foggy Early Morning Light By Photographer Kilian Schönberger
Photo of the Day: "GGWWWRGHH"
Scandinavian Airlines Pulled Out Vintage Images Of Old Menu Cards And In-Flight Meals
Photograher Captures Photos From The Highest Places In Tokyo Show The Beauty Of The City
The Spectacular Winning Photos From Underwater Photographer Of The Year 2019
Magical Urban And Natural Landscapes In Japan By Hiroki Furukawa
"Perfect Darkness": Foggy Nights and Melancholy Landscapes in Cinematic Photographs by Henri Prestes
"Graphemic Synesthesia": Artist Duo Spent 2 Years Photographing ‘Colored’ Letters To Show How They See Them
A Ukrainian Photographer Turns Long-Haul Trains Into A Fashion Fantasy In Her New Series
Darth Vader In Disneyland
Russian Literature: The Choice Of Asian Girls
This Baby Girl Has An Inoperable Brain Tumor, So Her Parents Did A Photoshoot To Show Their Love
A Couple Traveled to Croatia to Find "Game of Thrones" Filming Locations in Real-Life
Powerful Portraits of the Refugees by Brian Sokol
The Mysterious Woman Who Ticking Military Men Under Their Chins While Taking Pictures in the Photo Booth in the 1940s
Rare Photos That Captured Incredible Moments from History
Architectural Photographer Pavel Bendov
Soviet Ghosts: The Ruins of the Communism
Drugs shipping. Don't do this!
Photo of the Day: Typhoon Chan-Hom Lashes China
bengaluru, capital, india, other