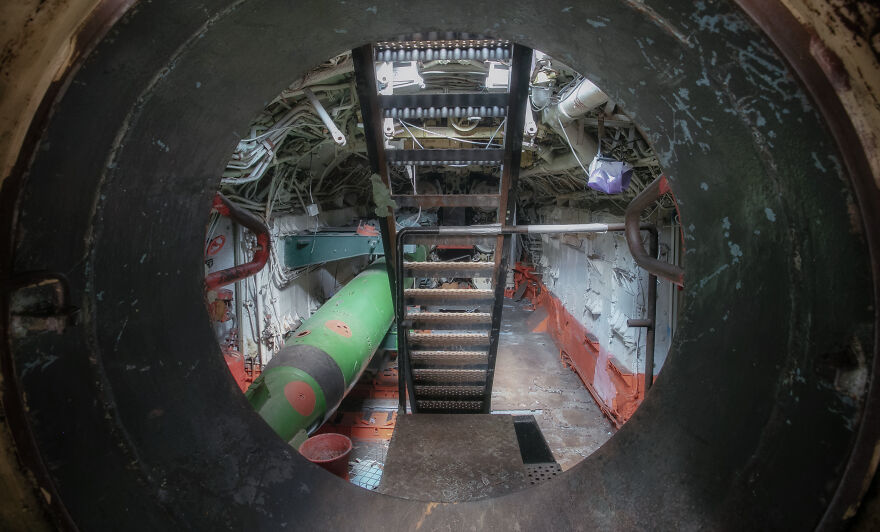 According to an explorers duo: “We are two. Him and Her. A man and a woman, husband and wife. We are open and adventurous. We are not athletes and far from the best photographers. We are searching, we are learning, we are developing, we travel, we look for adventures. And here they are – abandoned, decayed, derelict, lost and forgotten places, urban exploration, city suburbs… call it as you want .. but! As soon as you start exploring, you realize that there is a whole world of abandoned places.

It is different, it does not look real, there is something that is hidden, something that will never become public … secrets, memories, and the irreversibility of being.We do have a thirst for risk and boundless curiosity to find out what is hiding there, further, behind seven seals and locks … and we want to escape from the harsh pragmatic reality, to hide, to feel that we touch the past, to open the curtain of dust, to turn back time and to tell you the stories..” 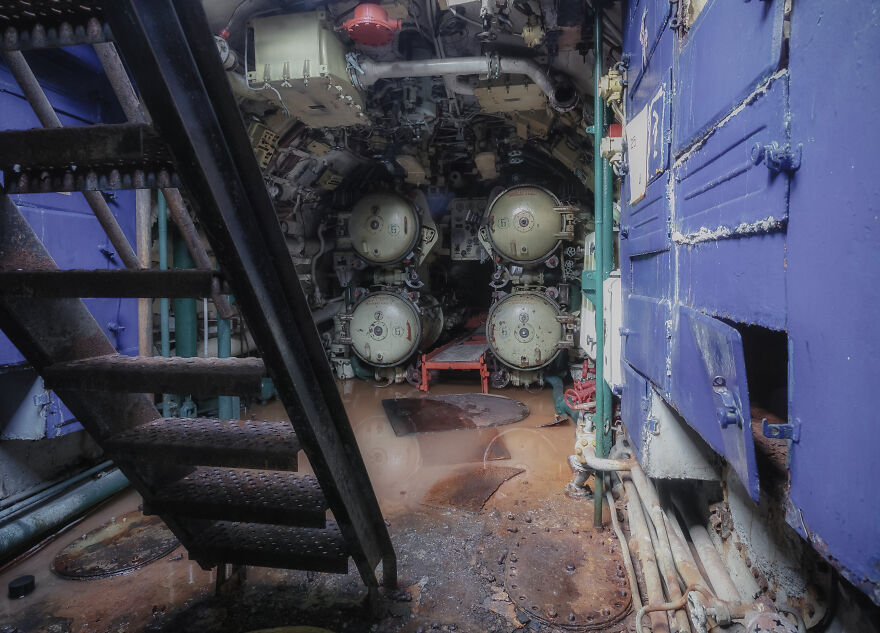 “Having explored abandoned places for quite some time, sometimes it seems that we have seen everything. But this time, it was not the case. We knew it would be special, but we couldn’t imagine that it would be THAT special. During this exploration, under the heavy rain, wind, and cold… there was only one thing that made us feel warmer—the inner voice with “we all live in a yellow submarine, yellow submarine…”

This particular submarine began its career in 1965. It served in the Northern Fleets, Baltic waters, and the Mediterranean, based in Egypt for some years.” 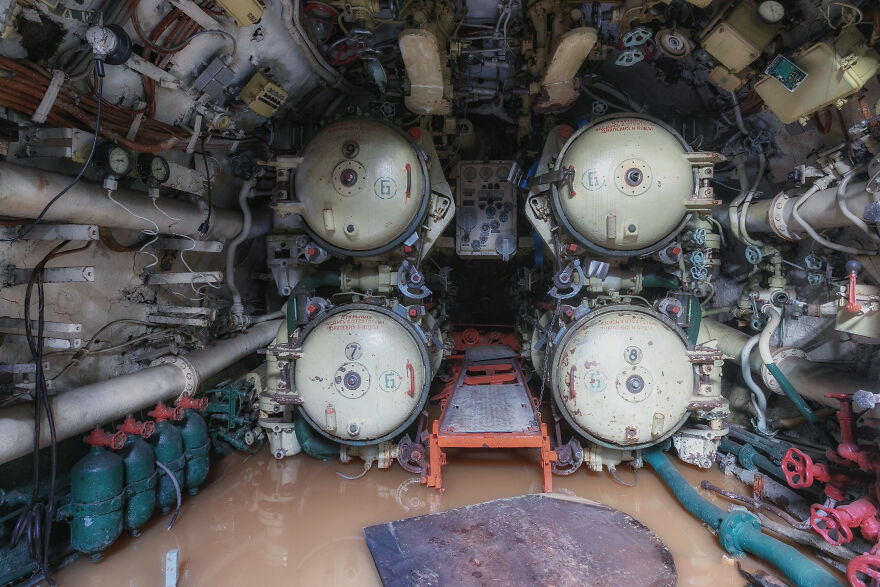 “Submarines of project 641, or Foxtrot, according to the classification of NATO in Soviet times, were recognized as very successful. They were designed for long-distance travel and patrolling the ocean, equipped with new torpedo tubes. The first submarine of the Foxtrot class became part of the Soviet fleet in 1958.

There were 75 submarines built in total, with 17 of them serving in the navy of Poland, Cuba, India, and Libya. The project had already become morally and technically outdated by the time the last submarine was completed in 1983. With the advent of nuclear submarines with no range limitations, Project 641 moved into the category of simply short-range boats.

78 people could squeeze in, work, and live there for several months. Don’t ask me how! Living conditions on board would be rather difficult, there was not enough space for every person, and the captain was the only one who had a cabin.” 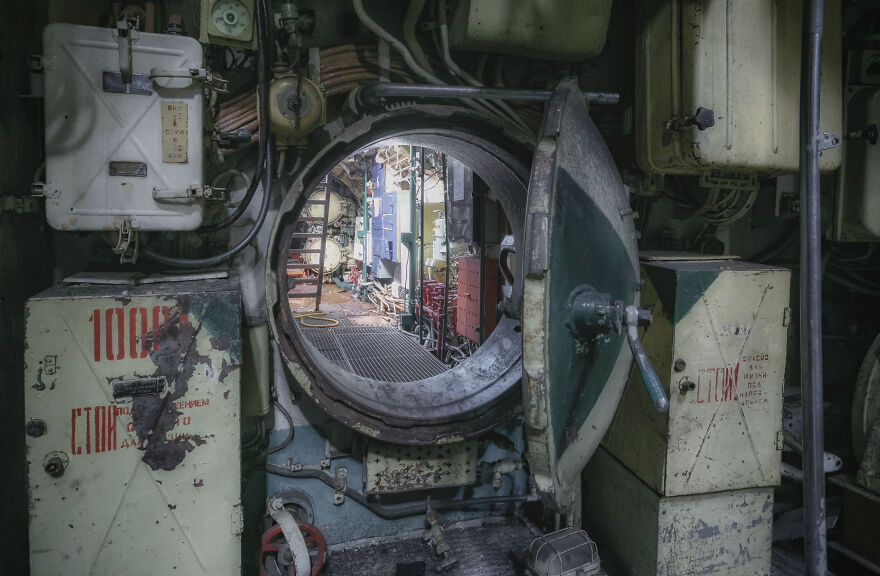 “Entering the submarine aft, we got down into an empty compartment with four torpedo tubes. Passing through a narrow way along with the multiple sets of arrows and buttons, we got to the compartment with a diesel engine, a radio receiver where encrypted messages could once be sent and received, a central information point, RADAR and SONAR sets, as well as an attack periscope that was used to search and triangulate probable targets.” 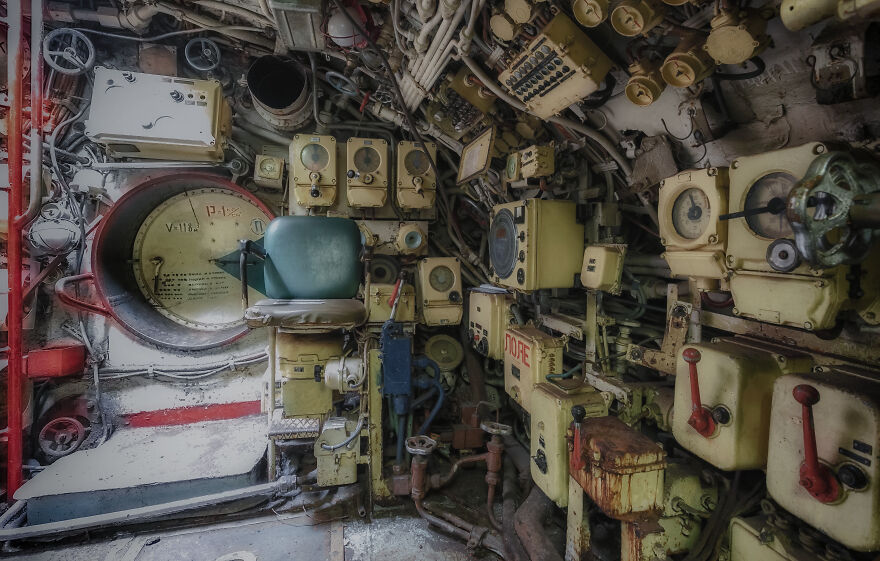 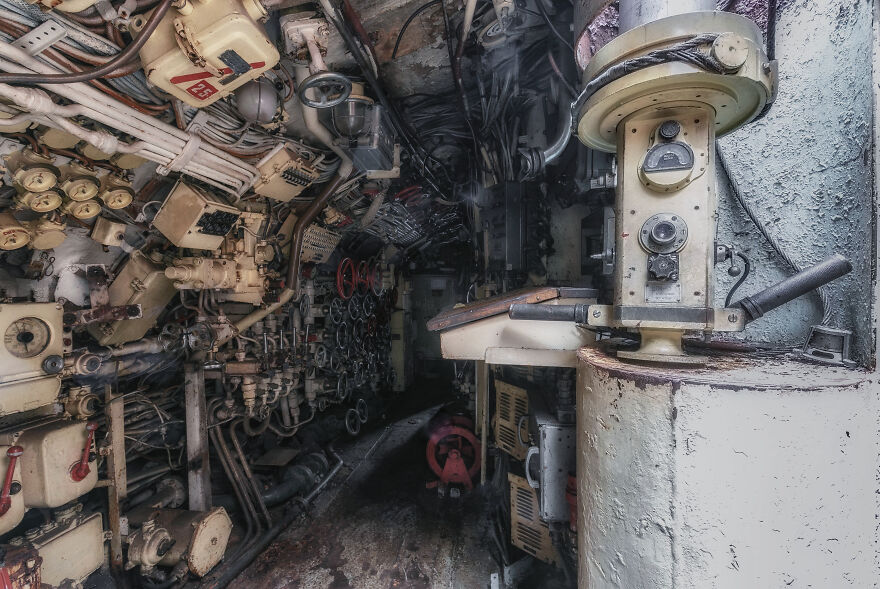 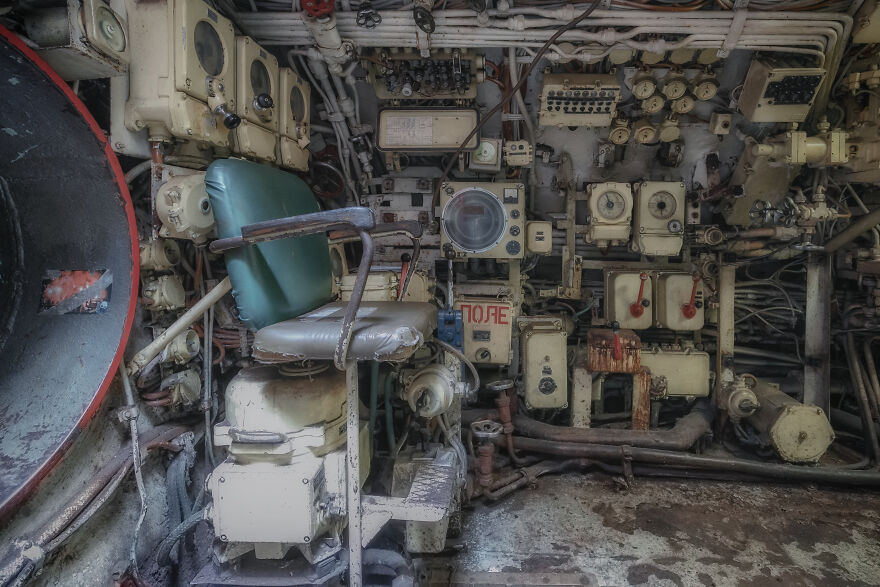 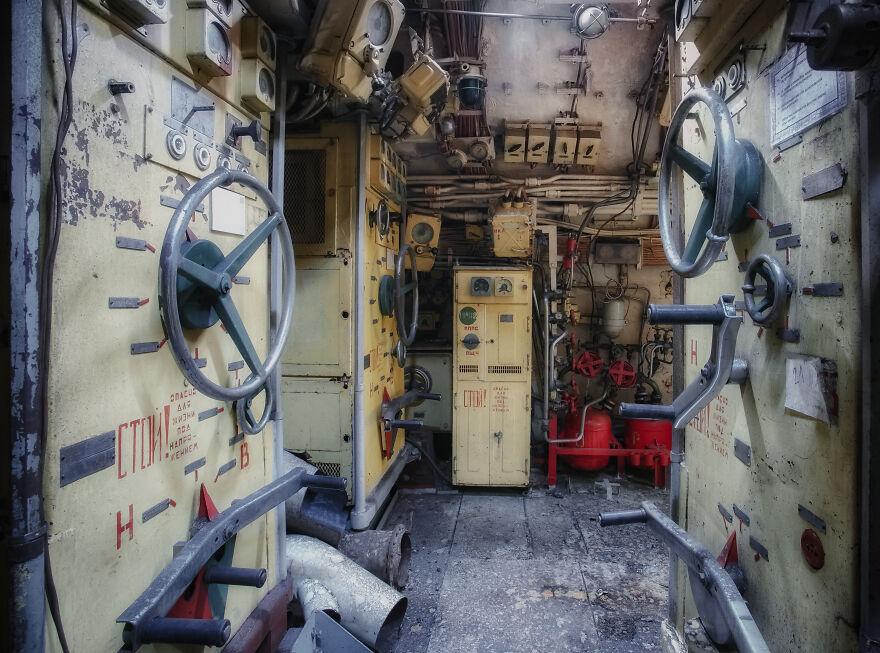 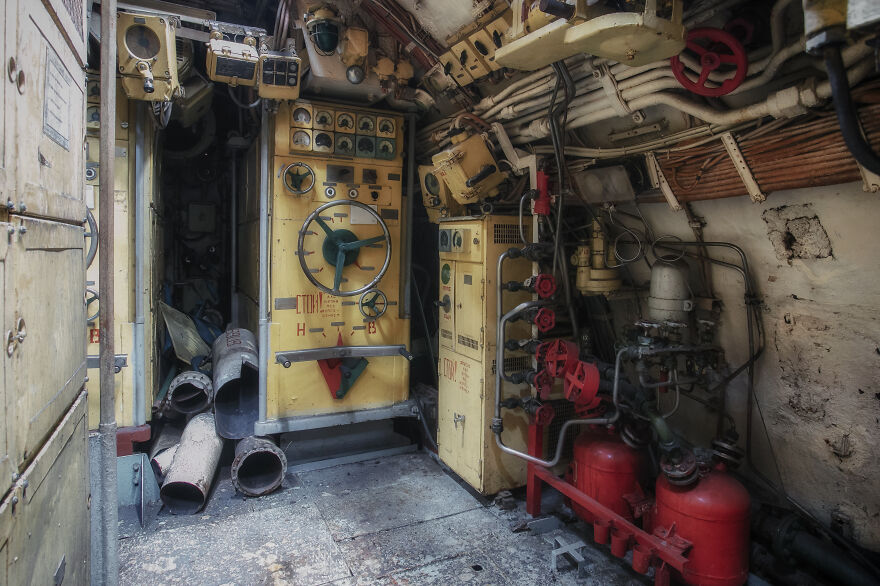 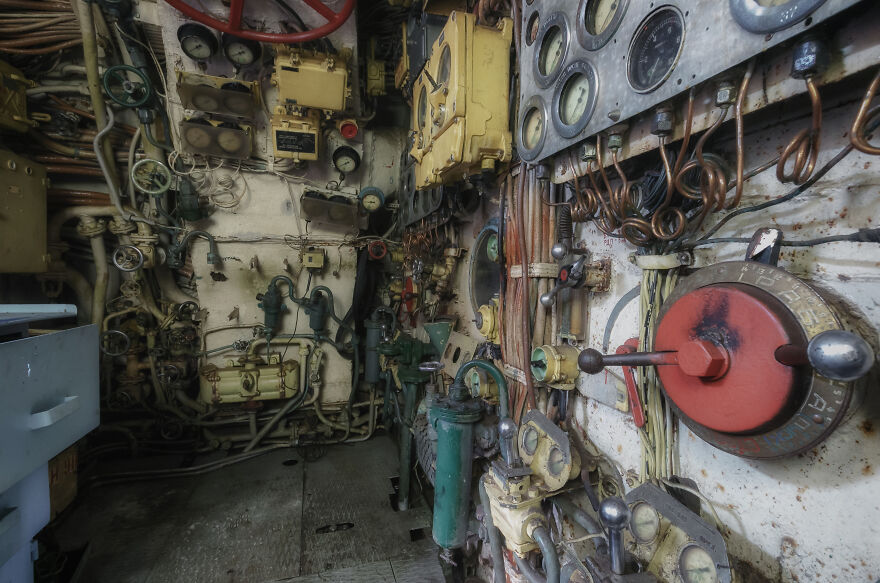 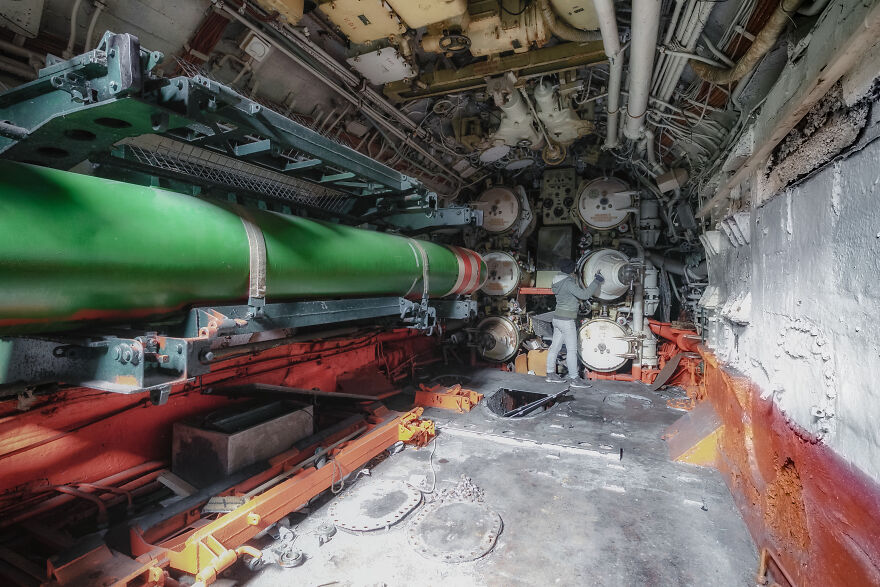 “Climbing and crawling, in the end, we could finally reach the bow compartment. Here, six more torpedo tubes greeted us along with a huge dummy torpedo. This submarine was capable of carrying a total of 22 torpedoes, ten of which were in the tubes, and another twelve were waiting for their placement into the tubes. The crew could sleep here next to the torpedoes, but when the submarine was fully armed, this room became as cramped as everywhere else in the submarine. Now the torpedo-free bow room easily became the largest submarine compartment.” 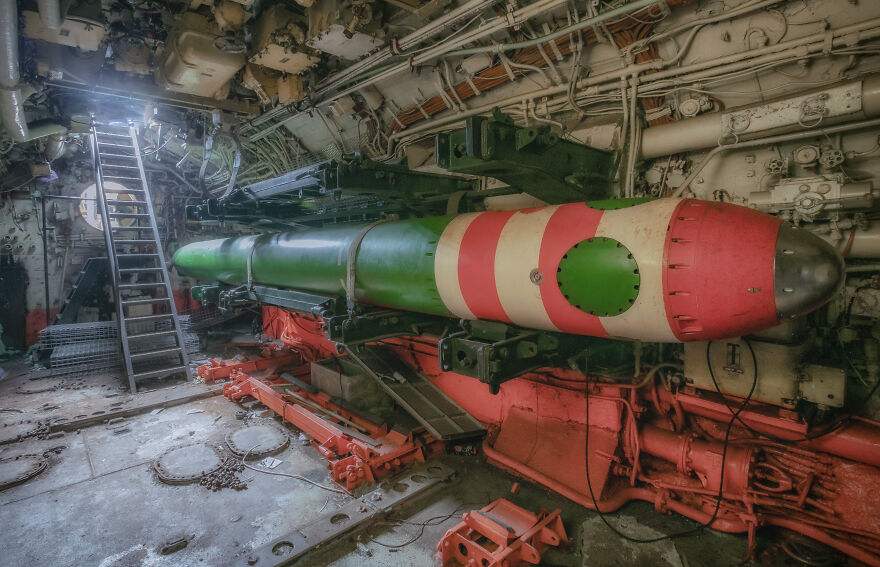 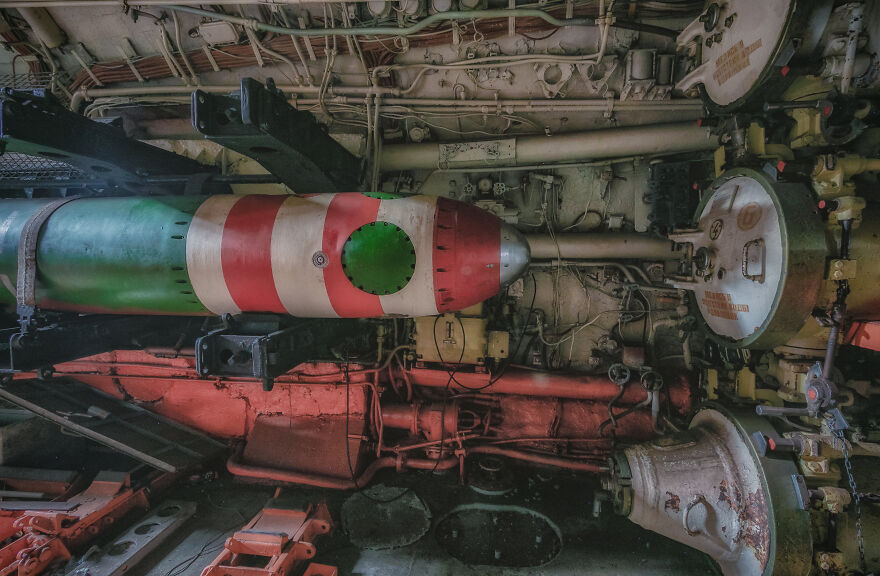 Unfortunately, at the time that we visited the submarine, part of the hull was already cut off, there were huge holes in it, and the equipment was partly removed or damaged.

After her 30 years of service, she was subsequently cut into scrap metal. Pity… but nothing to do. Anyway, it was one of the most spectacular explorations ever. We really enjoyed it. 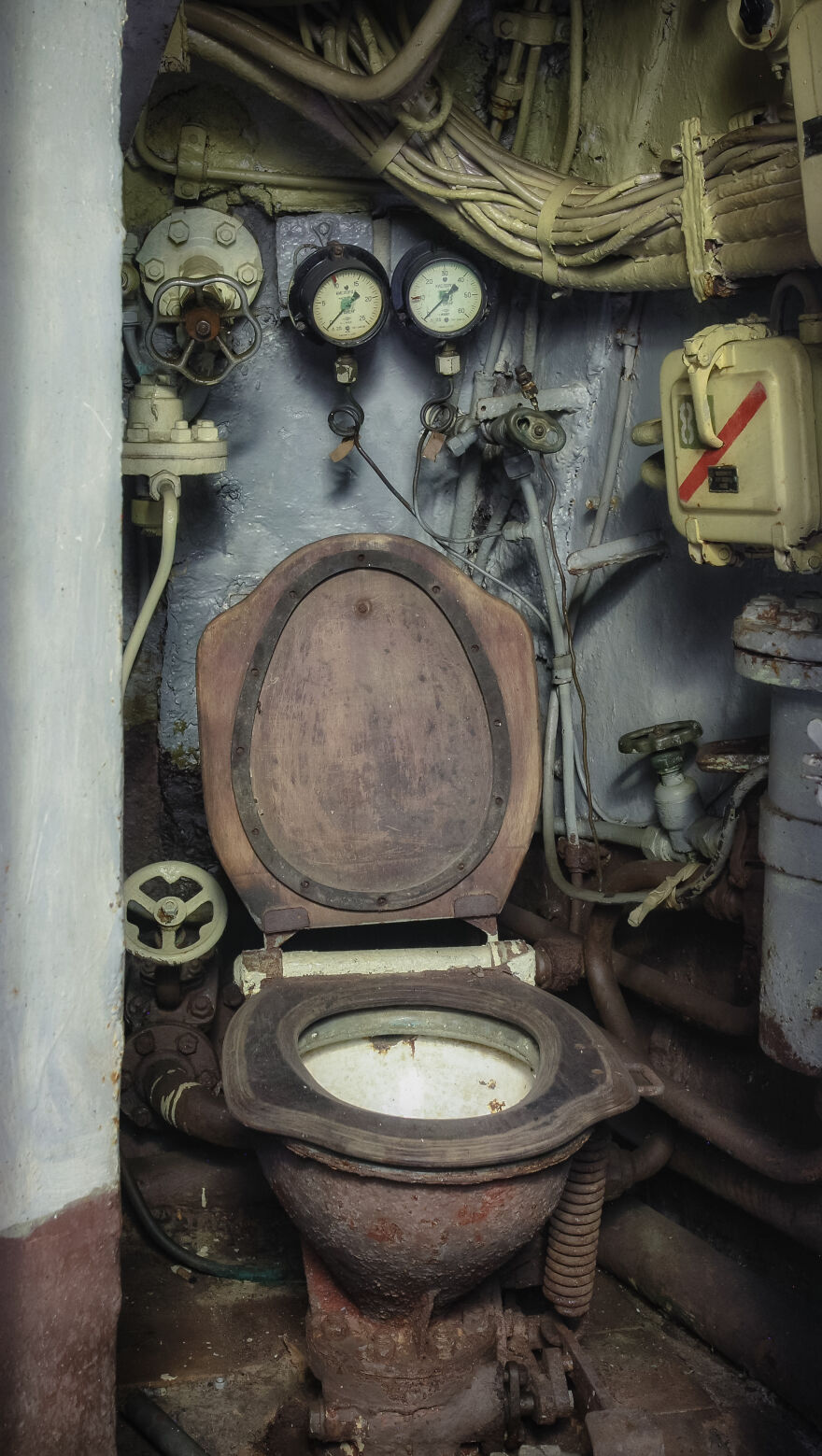 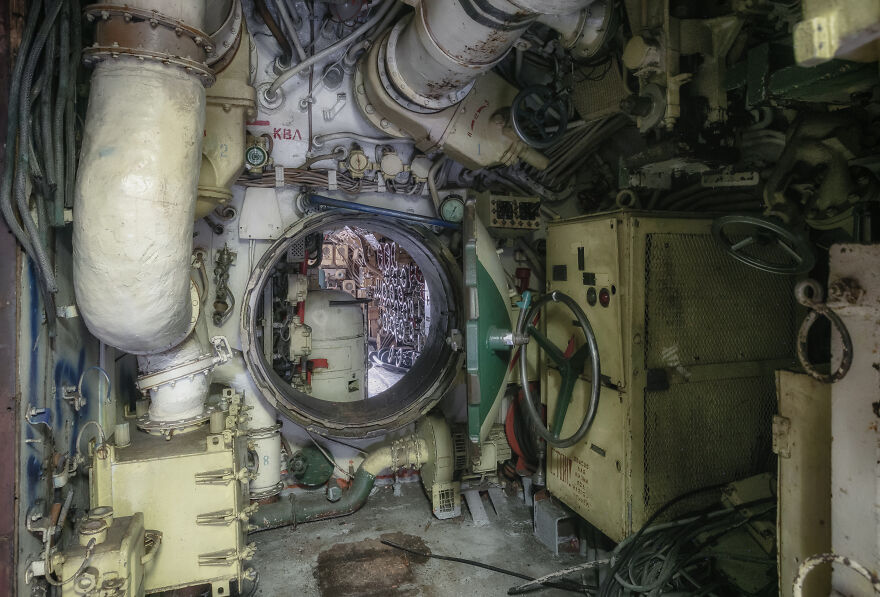 The Joys of the Water Slide
Stunning Photos Capture Bicycles From Underneath In Rarely Seen Angles
40 Weeks and a Mirror: Mother Documents Her 9-Month Journey with Child Through Selfies
Photographer Captures Intimate Photos Of The Russian Student Girls In Their Communal Apartments And Hostels
Amazing Then And Now Photos Merge London's Ghosts Of Christmas Past
Polish Photographer Creates Amazing Slavic Pagan Themed Photoshoot And Proves Slavs Have Amazing Culture
16 Moms Who’re Proud Of Their Perfect Imperfections
Japanese Photographer Captures Beautiful Dreamy Landscapes of Kamakura in Infrared
Gorgeous And Intriguing Series Of Photographs By Øystein Sture Aspelund Capturing Temporary Installations Of Smoke, Light & Fire, Set In Unspoilt Nordic Landscapes
Red Smoke Blankets the Salem Area in Oregon, Casting an Apocalyptic Glow
Beautiful Winning Photos From The Pink Lady Food Photographer Of The Year 2020
Awesome Moody Lifestyle Portrait Photography By Mark Singerman
Stunning Photographs Taken by Surfer Who Lost His Leg in Shark Attack
Autumn Forest Is Prettiest In Czechia Thanks To Photographer Janek Sedlář
This Family Uses Chalk Art To Go On Adventures During The Lockdown
Neon, Moody And Cinematic Nightscapes Of Shanghai And Beyond By Victor Chiang
Photographer Capture’s Kawau Birds Perched On Electric Wires In Tokyo
"Elevations & Avenues": Aesthetic New York Streetscapes By Matt Petosa
Portraits of a Baby Boy and Bulldog Who Were Born on the Same Day
Winning Photographs from The World of Water Competition
Photographer Andrius Burba Captures Stunning Photos Of Dogs From Underneath
Venice Beach Roller Skaters: Cruising The Promenade Of LA's Chillest Neighborhood
Incredible Photos Of Violinist Jascha Heifetz Playing In Darkened Studio As Light Attached To His Bow Traces The Bow Movement In 1952
Spectacular Winning Photos Of The 2017 International Photographer Of The Year Contest
Photographer Karen Jerzyk Paints Entire Rooms A Single Color For Surreal Shots
Sign Of The Times: Protest Signs That Sum Up The Sixties
An Alabama Mom Turned Her Baby Girl And Husband Into Terrifyingly Realistic Zombies
Donut Doubles by Brandon Voges
Dad Creates A Springtime Pregnancy Photoshoot Parody
"Symbiosis Of Working And Living": Claustrophobic Homes Of Beijing In Stunning Photographs By Alina Fedorenko
abandoned, inside, military, russia, soviet, submarine