Most Stunning Photos From The National Geographic Instagram Photography Contest

National Geographic has made a name for themselves with their earth-shattering photographs, so it was no surprise that they made Instagram history as the first brand to reach 100 million followers (those are almost Kim Kardashian numbers). To celebrate in true Nat Geo fashion, they opened up a photography contest across the photo-sharing platform – using the hashtag #natgeo100contest. In the 24-hour contest window, the magazine received more than 94,000 photograph submissions. The photo editors and photographers at Nat Geo went through the entries and narrowed them down to the top 10 most stunning images and then let their 10 million followers vote on who would be the grand prize winner. Below you can view the contest winning photo, the top finalists along with some other gorgeous entries that didn’t make the cut but are still just as mind-blowing. 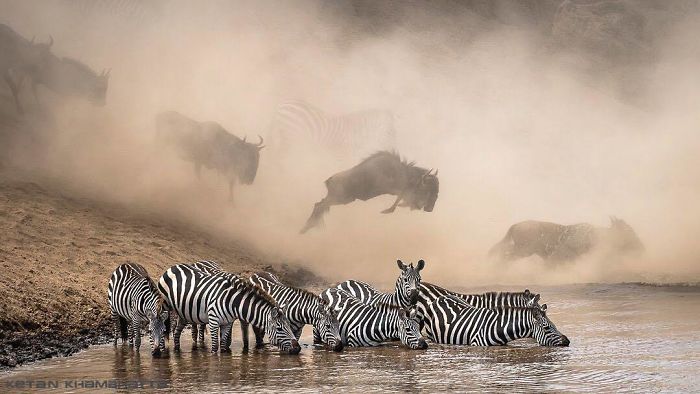 Grand Prize Winner Ketan Khambhatta. In the Maasai Mara National Reserve in Kenya, zebras search for crocodiles while wildebeest run across the river. Photographer Muhammed Muheisen: The image is so dynamic, with a powerful depth that keeps me looking. A moment well captured. 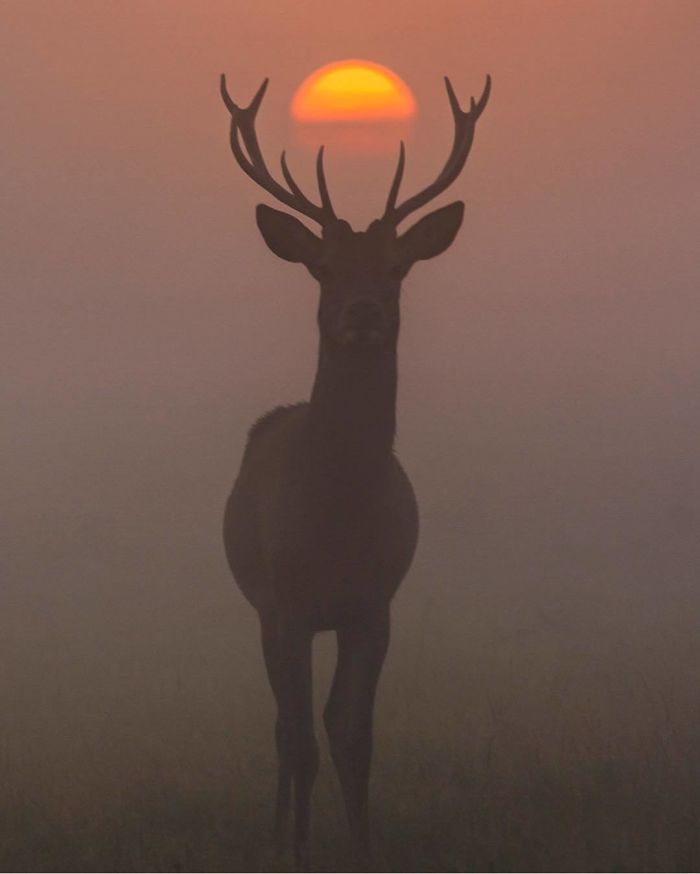 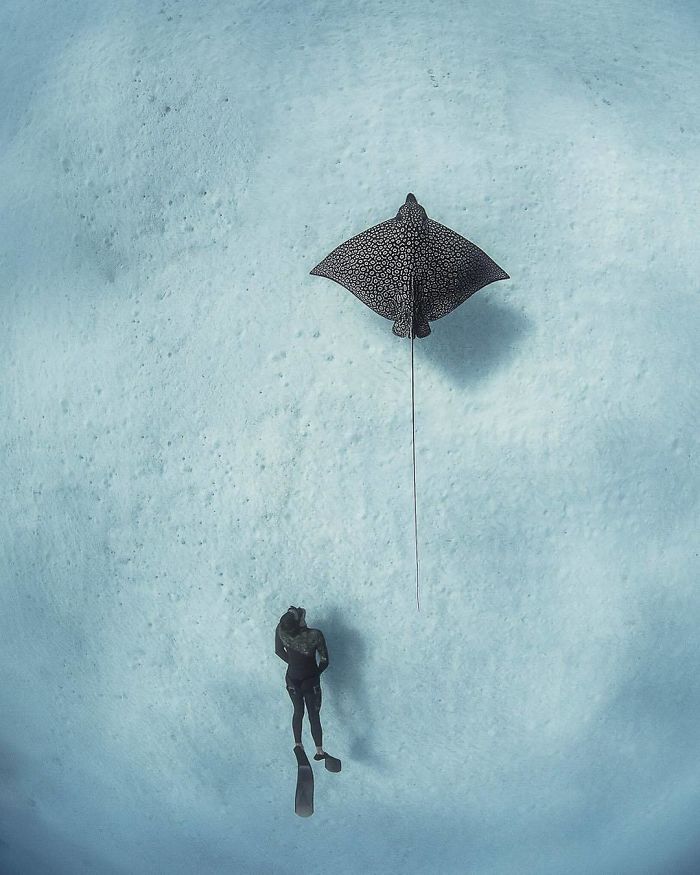 André Musgrove. Looking down from above, like a satellite orbiting around the earth, my camera’s view finder presses against my mask, this is one of the most memorable views from My World. Pushing through the strong currents, low visibility and rough waves this day was most definitely worth it. 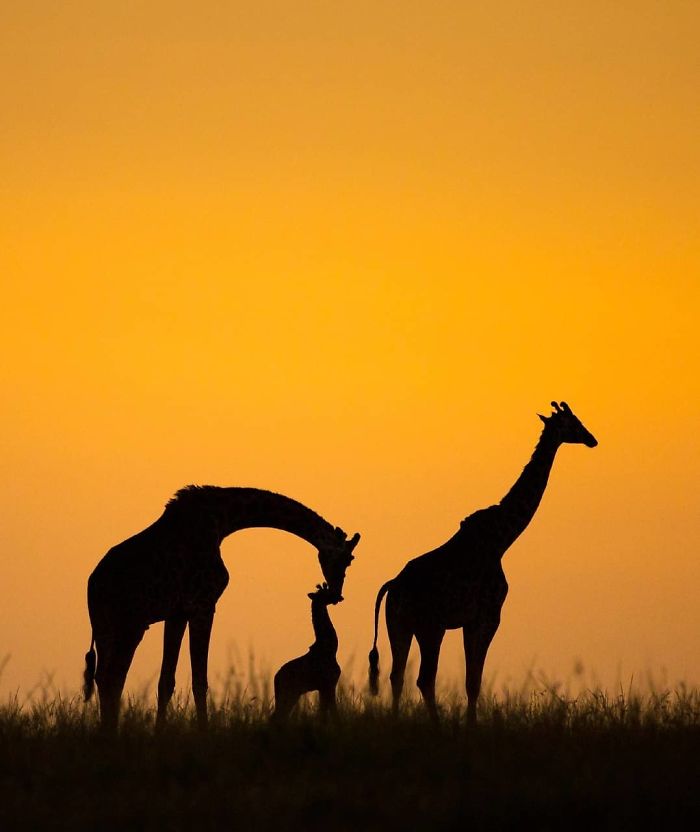 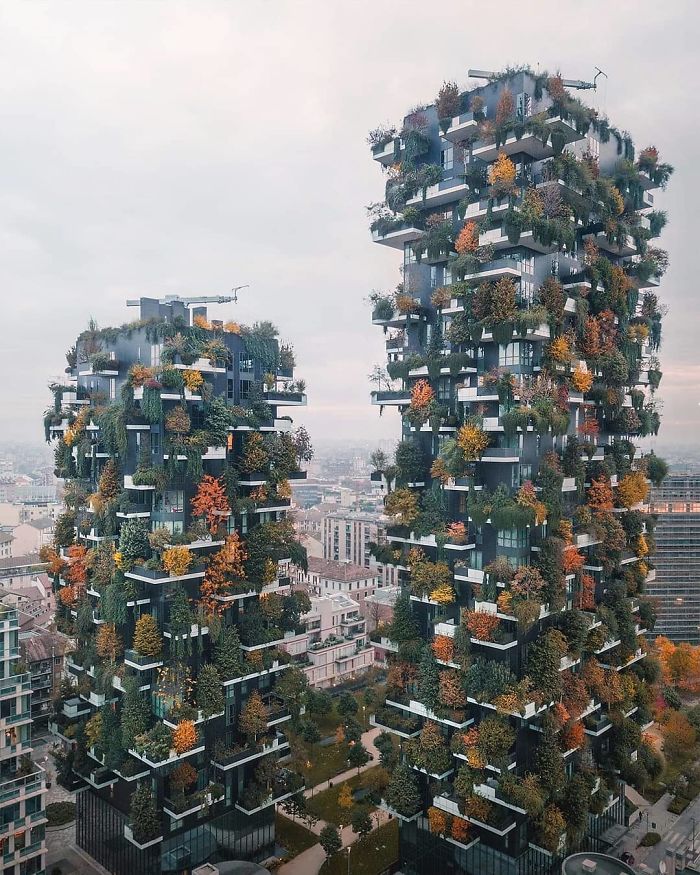 Sebastien Nagy. Always prefer the focus on a single tower but yes… there is another one right next. 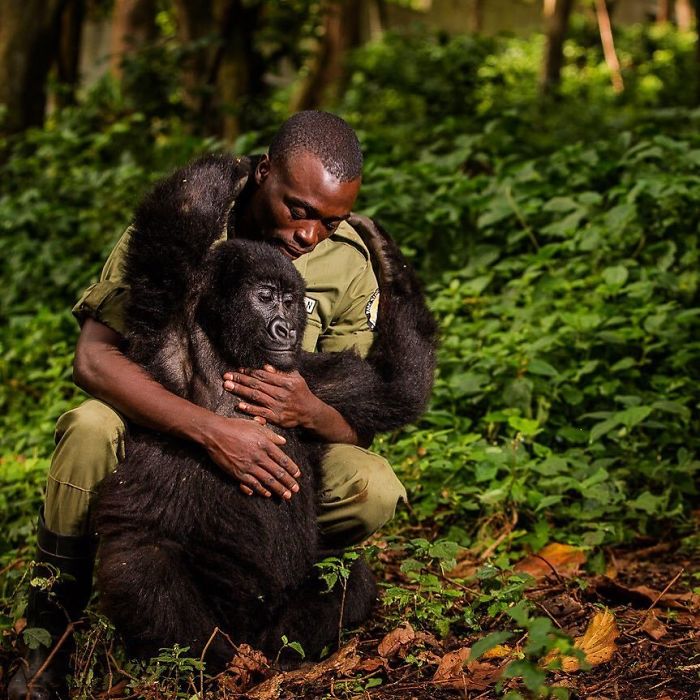 Finalist Adam Kiefer. National Park Ranger Matthieu Shamavu embraces Matabishi, an orphaned juvenile mountain gorilla, at the Senkwekwe Center, in the Democratic Republic of the Congo. Senkwekwe is the only rehabilitation center for mountain gorillas in the world. Photographer Ami Vitale: The image is sublime because we immediately understand that it’s a metaphor for unspeakable brutality but also great tenderness. This image illustrates our complex bond with the natural world. 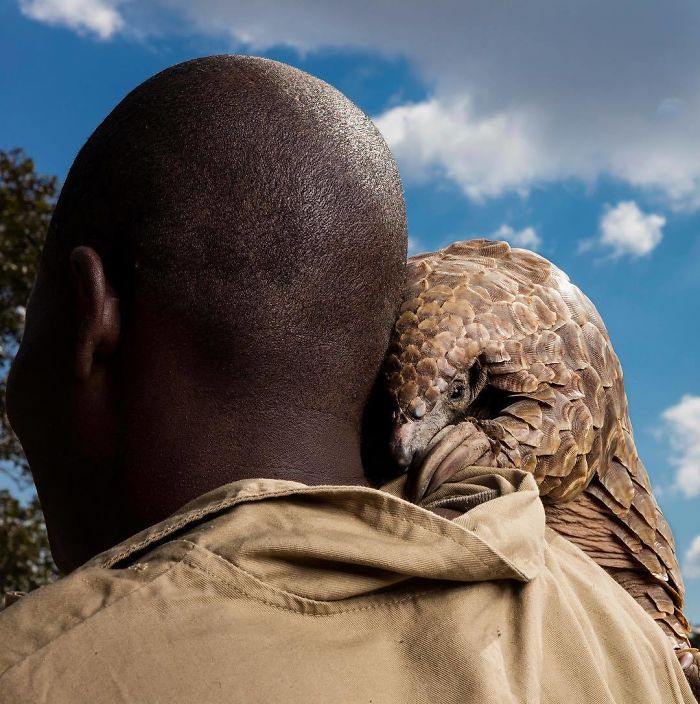 Brent Stirton. I was totally privileged to spend time with the world’s best pangolin care-givers at the Tikki Hywood Trust for an upcoming natgeo magazine story. I witnessed an extraordinary relationship unfold as these men helped rescued, traumatized pangolin to find ants and termites to eat and kept them safe from predators and poachers. Pangolins are the world’s most trafficked animal in the illegal wildlife trade and are extraordinarily endangered.

The Tikki Hywood Trust undertakes public awareness campaigns, trains law enforcement and judiciary personnel, conducts research, and rehabilitates pangolins that have been confiscated from the illegal trade. They operate with partners across Africa and advise in Asia. A recently opened extension Tikki Hywood Trust Foundation cameroon is doing great work in the epicenter of the illegal pangolin world. Founder Lisa Hywood is seen as a global expert on how to care for Pangolins in captivity and along with partner Ellen Connelly, they represent an extraordinary example of how to care for animals. The trust also engages with other organizations and governments throughout Africa to highlight the plight of pangolins, raising awareness of their conservation status and educating them as to the need for conserving pangolins, as well as implementing conservation actions. Many of their activities are not covered by research grants and they rely on sponsors and donations to continue their work.

It is estimated that over a million pangolin have been lost in the last ten years, this is from a population that we have never counted, we have no idea how many remain, and we know it is not possible to breed these animals in captivity. We are losing these extraordinary animals so quickly to the illegal Asian market that they may disappear before we can truly appreciate them. 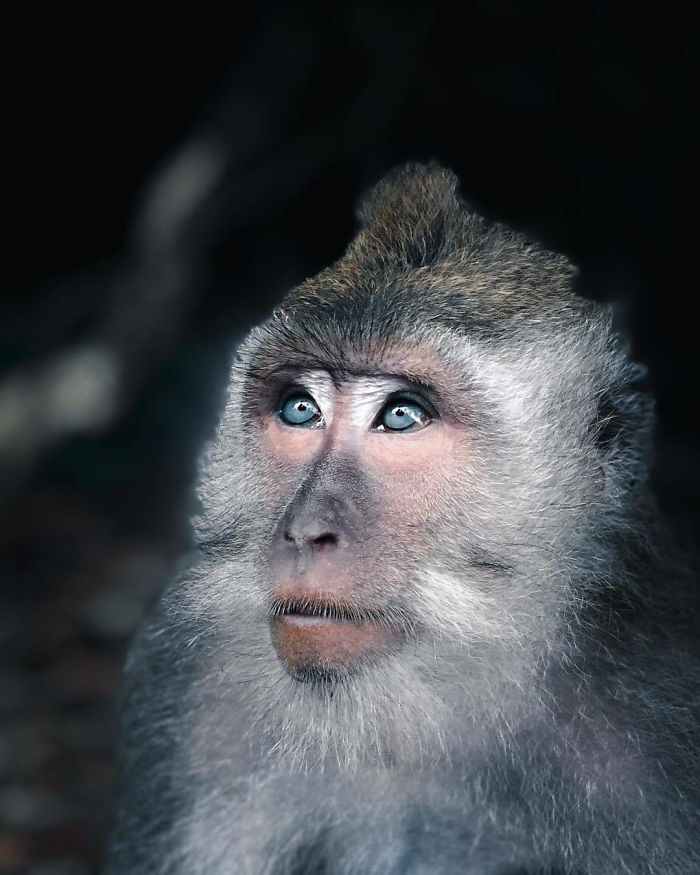 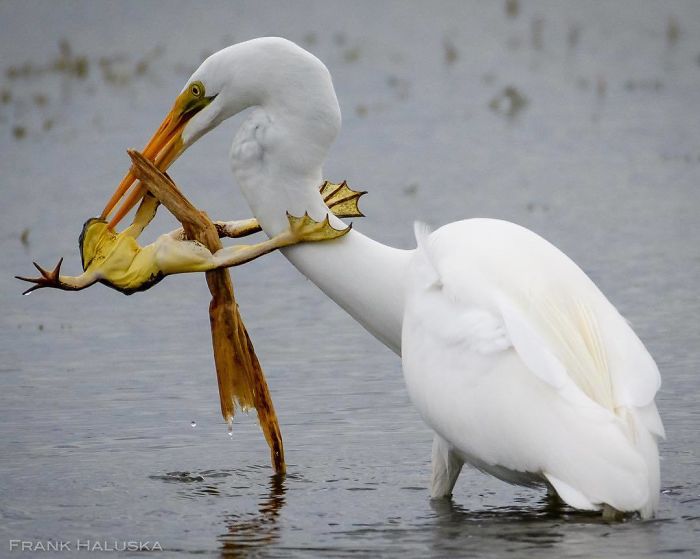 Finalist Frank Haluska. Great Egrets appear serene and still in wetlands, but they are also vicious hunters, who eat anything they can catch—including this bullfrog, who appears to be fighting hard for survival. Photographer Cory Richards: This moment is so bizarre and confusing that I had to zoom in to make sure another animal’s foot wasn’t sticking straight out of the water to block the distressed frog from certain death. 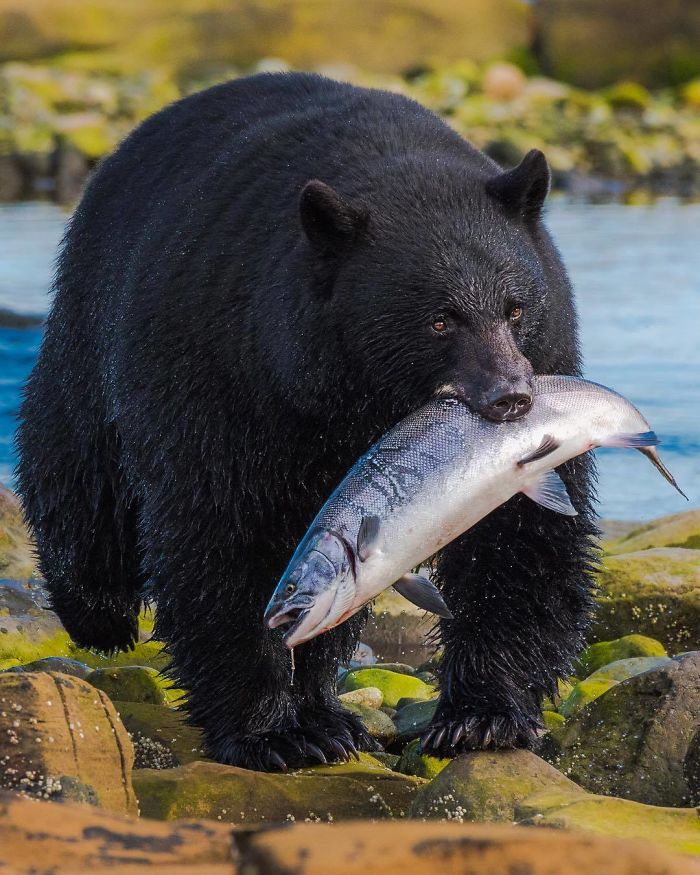 Yuri Choufour. Sashimi anyone? Black bears enjoy a varied diet, but these omnivores greatly depend on protein rich salmon to build up reserves as they prepare to hibernate in winter. 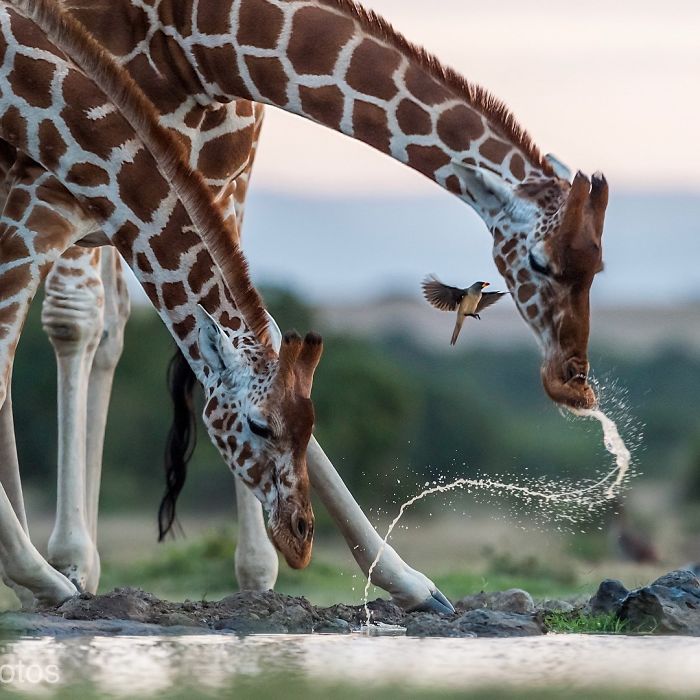 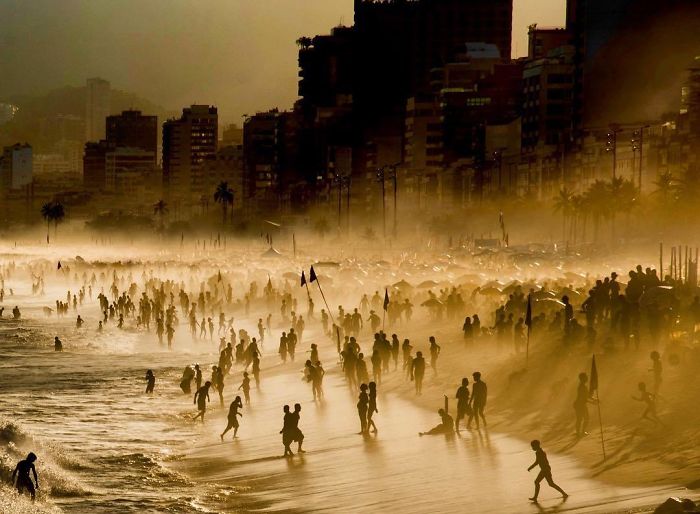 Finalist Sandra Cattaneo Adorno. On a day when the sea was unusually rough and the undertow dangerously strong, bathers on Ipanema beach, in Rio de Janeiro, appear hesitant to take the plunge. Photographer Michaela Skovranova: A surreal scene—this image highlights an eclectic mix of light, human impact, and the power of the environment. It’s as if the heat of the Earth and the humans is radiating off the sand, creating their own micro climate. 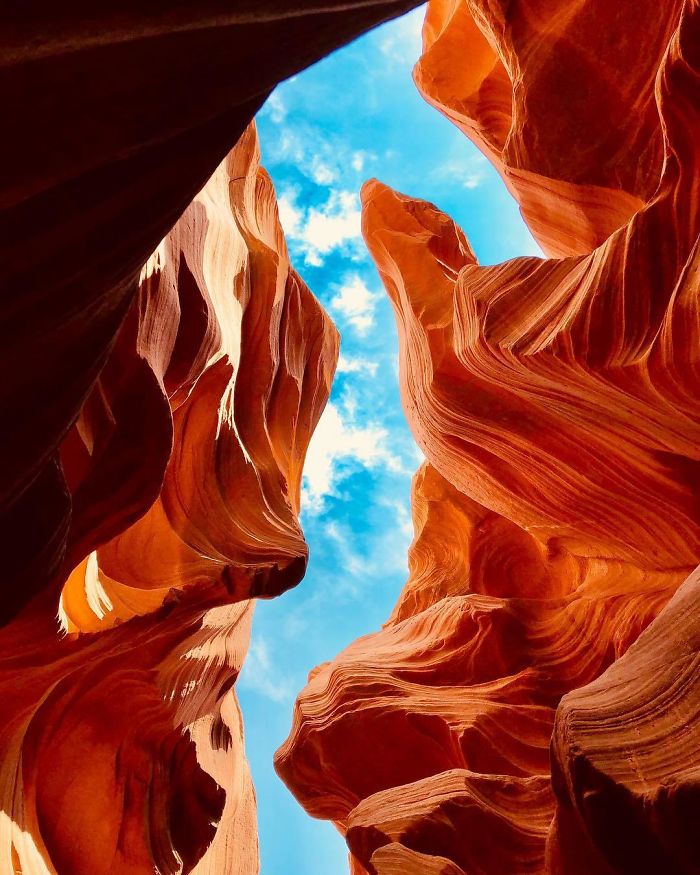 Devon Fox. Can you see the sea horse? This photo was taken in Page, AZ during our last road trip. Strange shapes start to appear in the layers carved into these slot canyons. 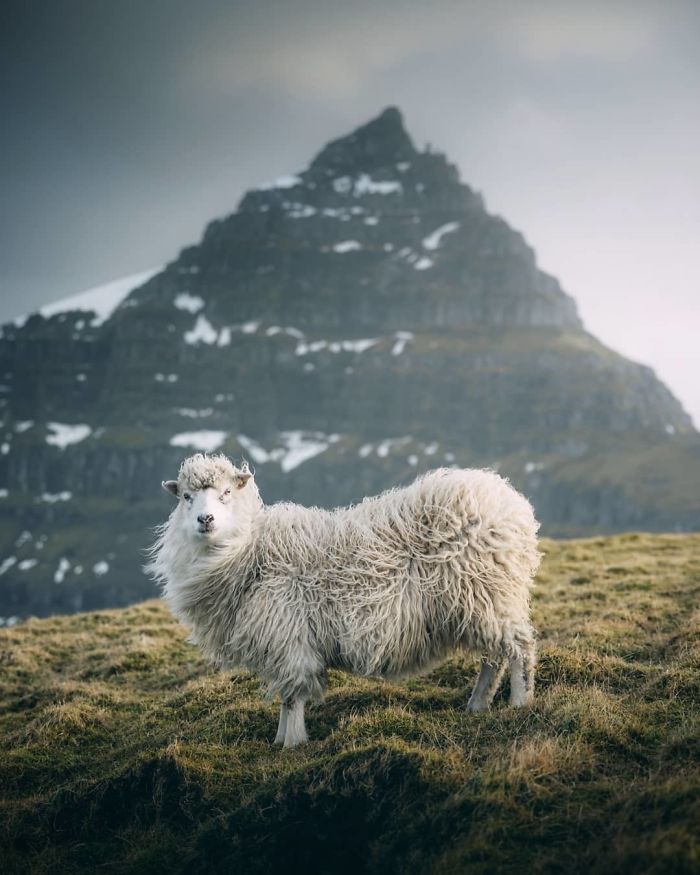 Sebastian Scheichl. Starting my pictures from the Faroes with a sheep, probably the first thing that comes to your mind when thinking about these islands. 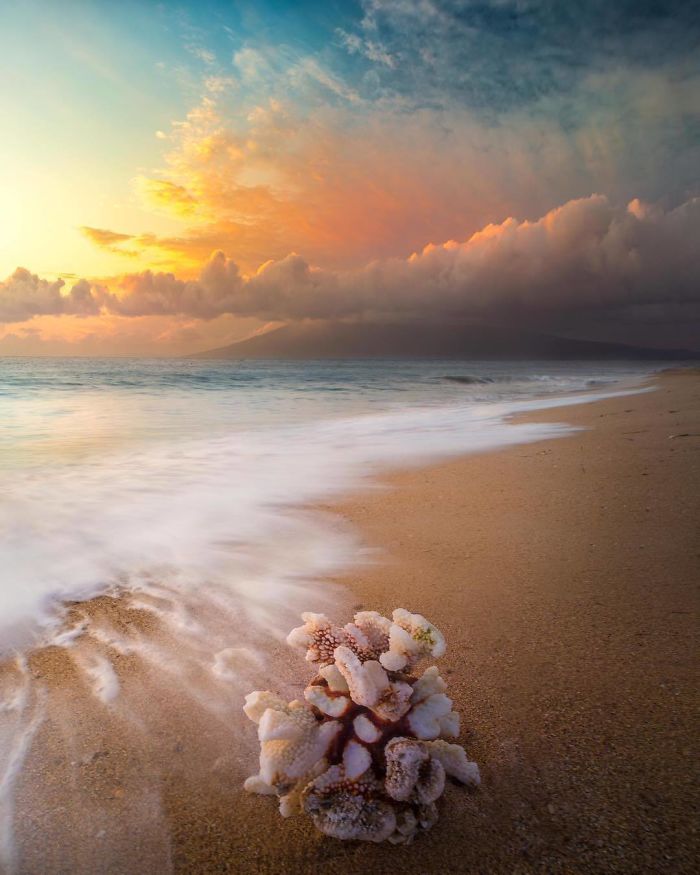 Nicholas Parker. Following one of the worst winter storms in Hawaii’s recent history, large swells wiped out the beaches of western Maui. The next day, large pieces of coral were scattered throughout the beach.. I picked through the most colorful and beautiful pieces and found this composition of the island of Moloka’i. The wave action reminds me of fingers from the sea coming to reclaim the coral back. 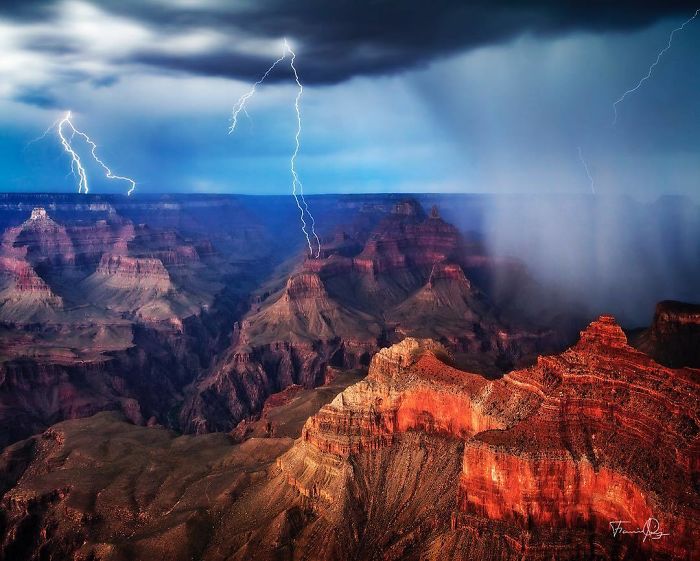 Finalist Francisco J. Perez. A summer thunderstorm rolls over the Grand Canyon. This image is a combination of three consecutive long exposure photos of the storm. Photographer Charlie Hamilton James: This is an exceptional image of lightning striking the Grand Canyon. It is muddy, dramatic and demonstrates excellent technical ability. 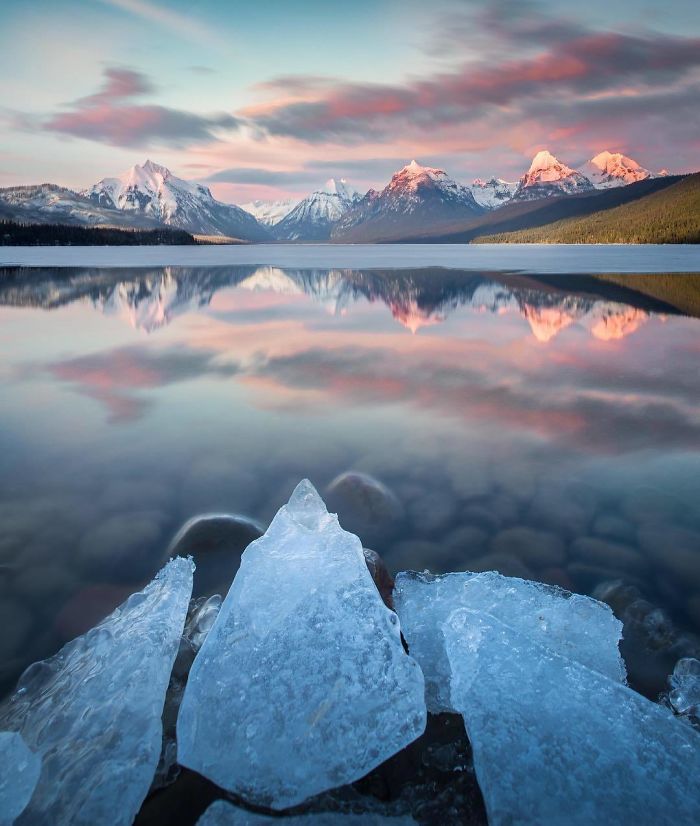 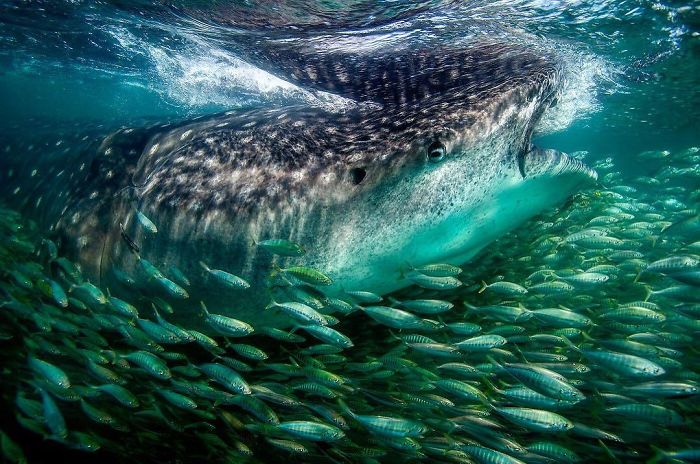 Finalist Matt Potenski. Whale sharks have personalities. This one was bold and curious, approaching the boat anytime we came near. Whale sharks are huge, so large they resemble living reefs. No other terrestrial animal can match their size, power, and grace. Photographer Cristina Mittermeier: I have done a lot of swimming with whale sharks, and you never get to see an absolutely beautiful moment like this that exemplifies the abundance of healthy oceans. 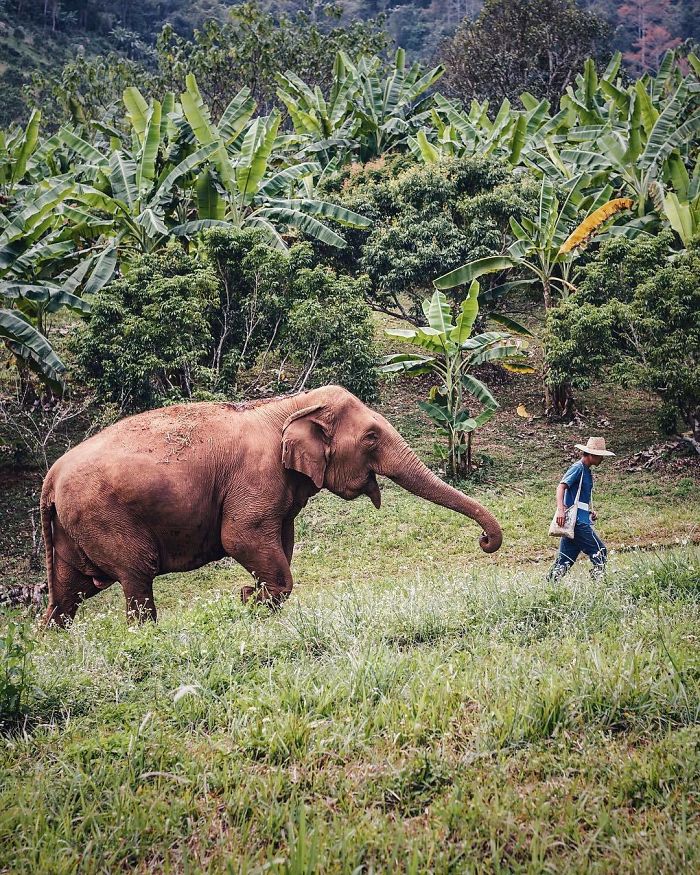 Jacintha Verdegaal. I still have a lot of Thailand photos to share, but this – spending the day with 4 rescued elephants – was definitely one of the highlights of 2019 so far. 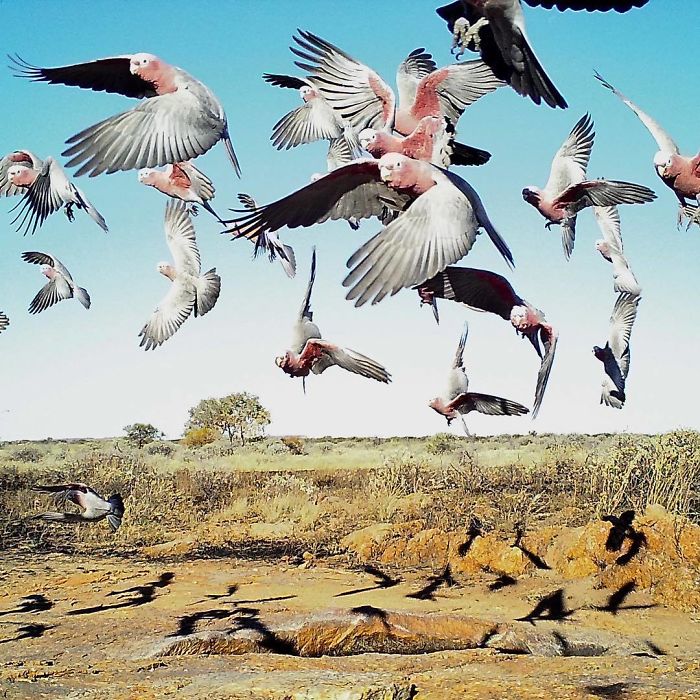 Finalist Chris O’bryan. Galahs, a species of cockatoo, scour the parched Outback for water in Western Australia. Here, waterholes are the vital source of life. Photographer Wayne Lawrence: Of all of the images of wildlife, this one seems less clichéd and stood out because of the masterly use of color and composition. Juan Quinteros. One from the “sharks in the sandstorm” series. 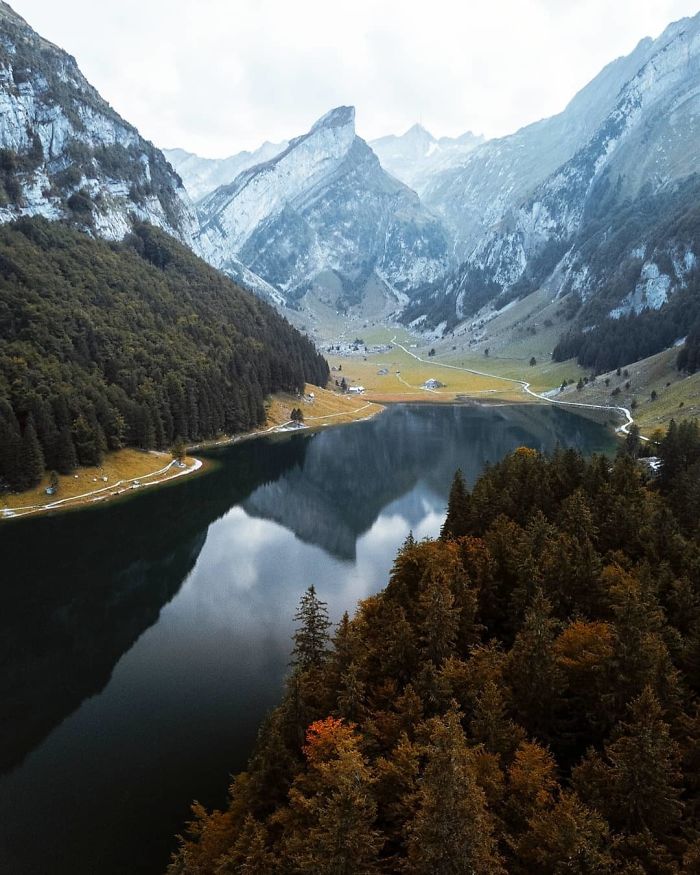 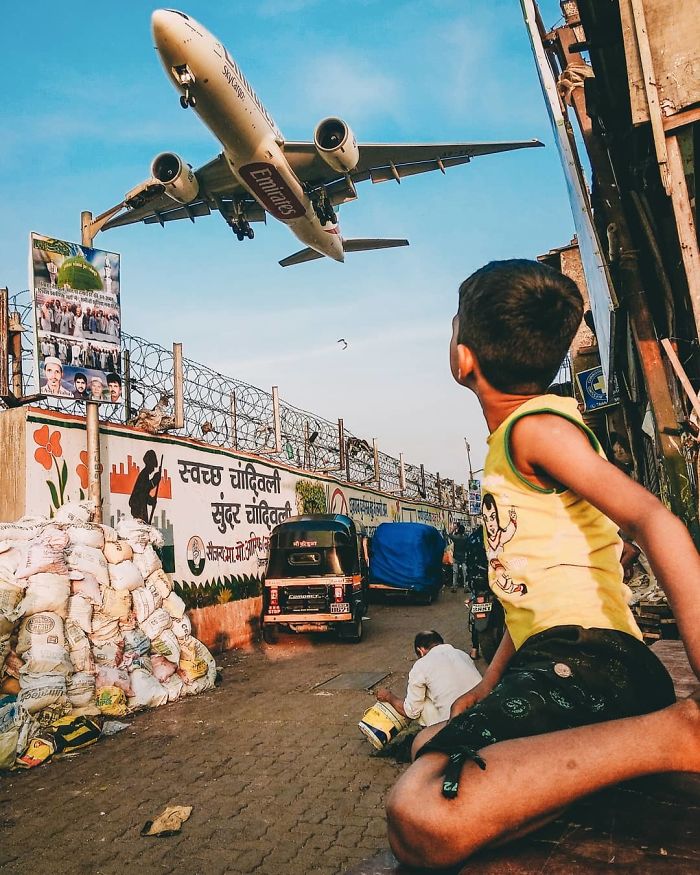 Shivam. Madness is somewhere between chaos and having a dream. 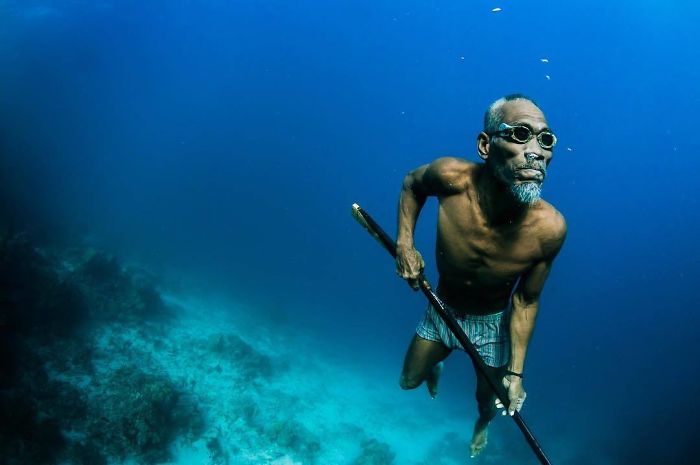 Caine Delacy. This is probably my most favorite shot. 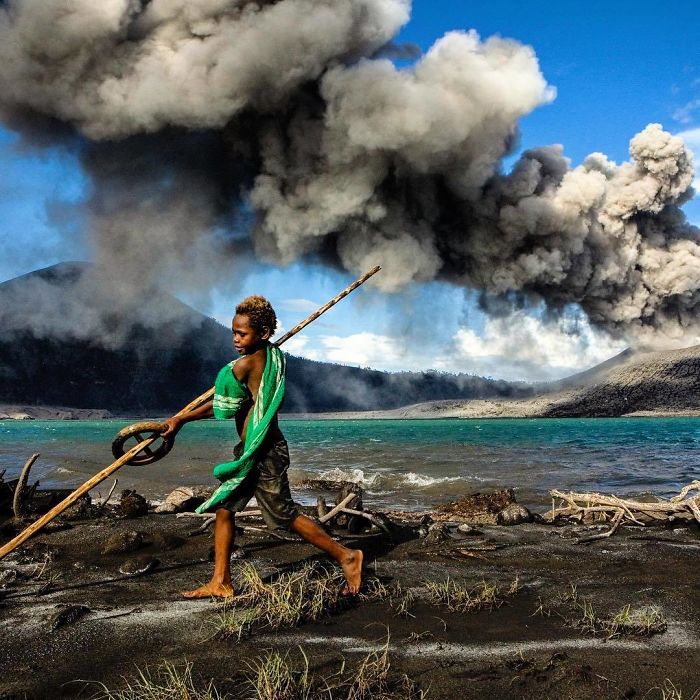 Ulla Lohmann. Another one of my all time favorite images: Munganau walks home. The erupting Tavurvur volcano has destroyed beautiful Rabaul town. The people showed amazing resilience against the odds of nature and stayed with the hope, that their paradise will one day return. Fingers crossed that the volcano stays quiet! 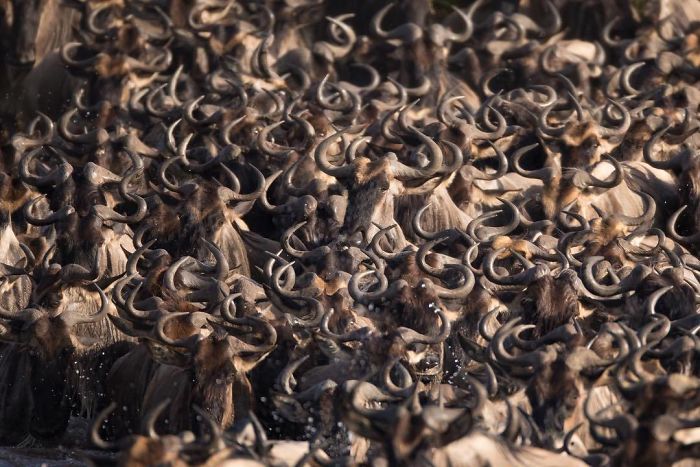 Finalist Sara Stein. This image depicts the frantic momentum of wildebeest crossing the Mara River in Tanzania. Photographer Tasneem Alsultan: I enjoy photos that aren’t that obvious. Is it wasps of hair? Or shards of wood? The mass of horns rushing my way seem lethal, and yet the photographer made us see the image from an artistic view. 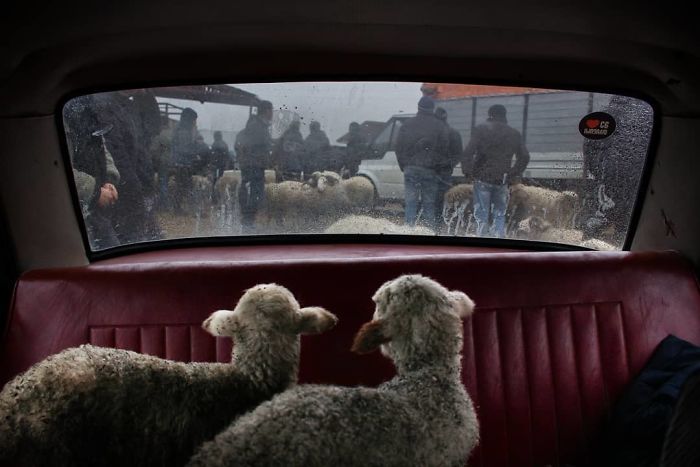 Finalist Khatia Nikabadze. A pair of lambs stare out a car window at a livestock market in Marneuli, Georgia. Photographer David Guttenfelder: This photograph wasn’t made in the wild, yet the picture, in one moment, tells the seemingly bittersweet story of the young lambs. 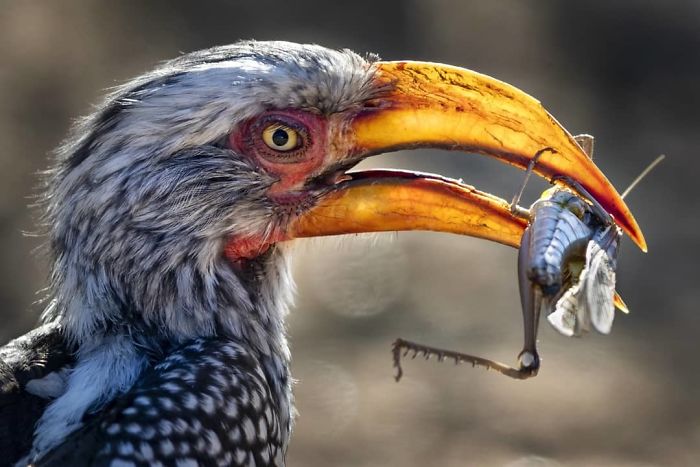 Ken Geiger. It’s time for breakfast! Backlit by the early morning sun a southern yellow-billed hornbill snags a grasshopper for a snack. 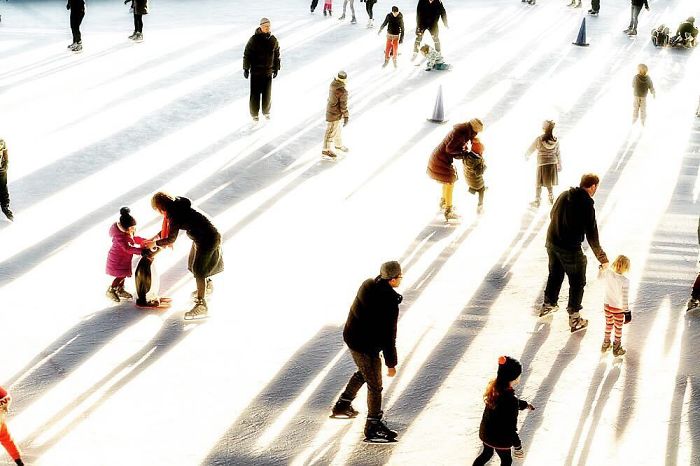 Finalist Felice Simon. Families glide on an ice rink in Brooklyn, New York’s Prospect Park on an unseasonably warm January day. Photographer Maggie Steber: This photograph of skaters large and small somehow reminds me of a memory from childhood. The way the pristine light shoots across the ice creating long shadows feels symbolic of how we have to stay the challenging course of raising our children, always being there to catch them if they fall. 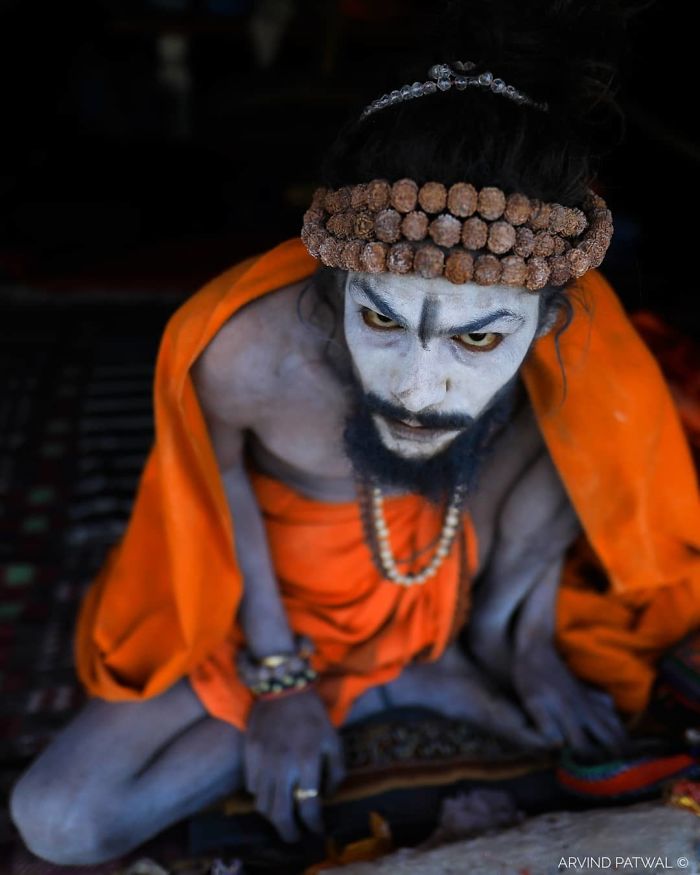 Arvind Patwal. “NAGA “. Believes that the twinkle in her eye may be the reflection off her lost marbles.

Japan’s Tiny Instagram Models, These Hedgehogs’s High Concept Photoshoots Give Us Life
Propaganda Pictures Of The Vietnam War From The Enemy Side
Edwardian Angels: The Pure Beauties From The 1900s
Through The Light And Darkness, Off The World And Back With Photographer Gueorgui Pinkhassov
Satellite Eye on Earth: March 2012
Heroes: Portraits Of 35 Frontline Workers That We Turned Into A Billboard In The Center Of Warsaw
"My Surreal Photography Is A Reflection On Years Of Depression"
Fascinating Fashion Photography By Yuliia Stepanok
Marvelous Beauty And Lifestyle Portraits By Consuelo Sorsoli
A Photographer Travels Across India To Show How Beautiful And Diverse Local People Are, And We’re Mesmerized
Source of inspiration since 2007. Proudly hosted by WebHostingBuzz.
Privacy Policy · Terms of Service · Content Removal Policy 🇺🇦 ❤️