The shortlist comprises 90 photos by 31 professional, amateur and student photographers, from across the world. Covering topics from the impact of Covid-19 on transgender women in Jakarta, to rising temperatures in the Arctic Ocean, to addiction and the process of recovery, the prize aims to tell provocative visual stories and challenge preconceptions of these urgent health issues of our time. 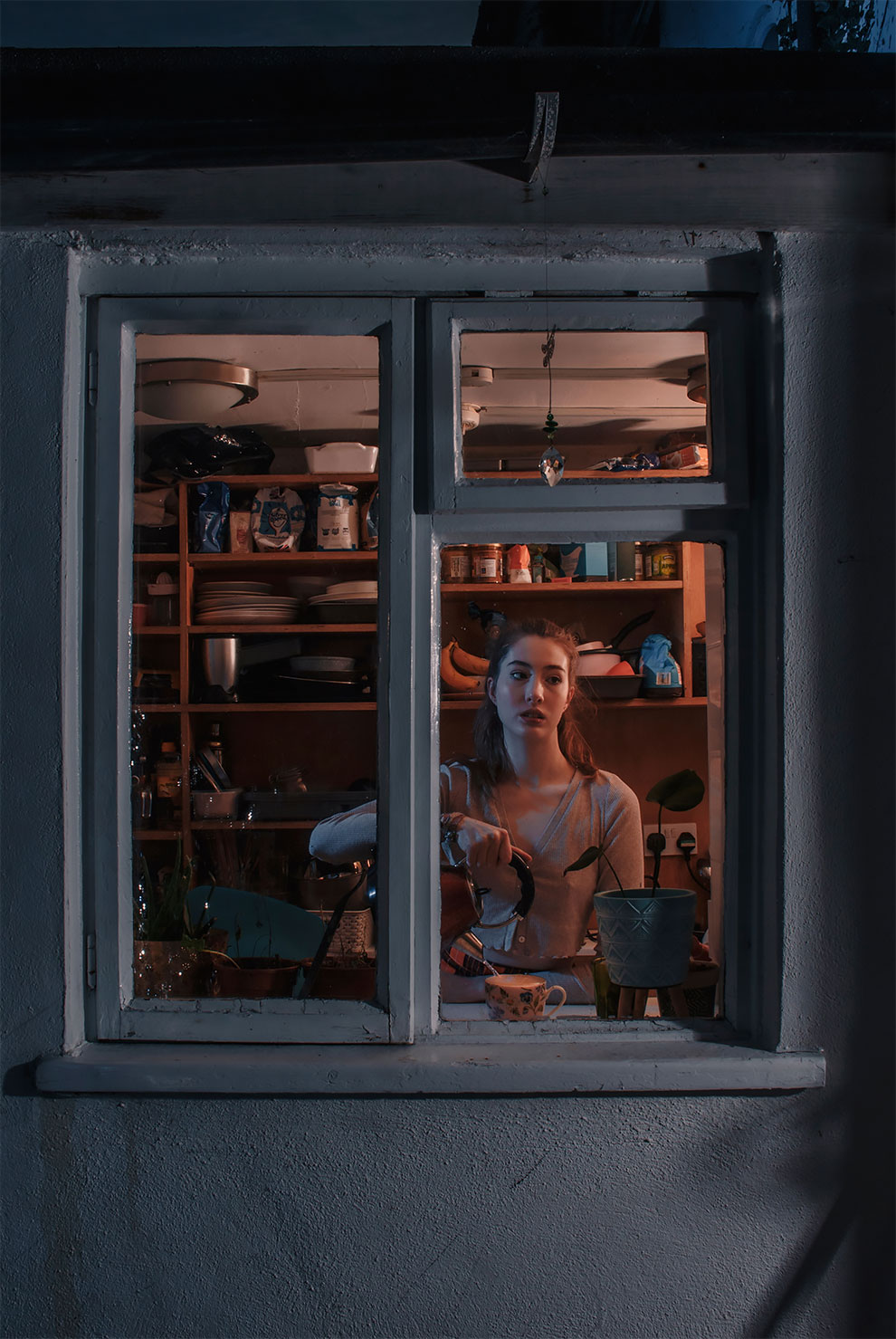 Managing Mental Health (single image). Disconnected by Kate Rosewell. “Experiences of dissociation involve feeling separated from yourself, like watching your life as if it were a film. Distanced self-portraits such as this one capture a sense of that for Kate Rosewell, and help her to make sense of what’s in her mind. Dissociation can be a way of deflecting intense trauma, but it can also occur in less extreme situations, not least the isolation of lockdown, which in another way has separated so many of us from reality”. (Photo by Kate Rosewell/Wellcome Photography Prize 2021) 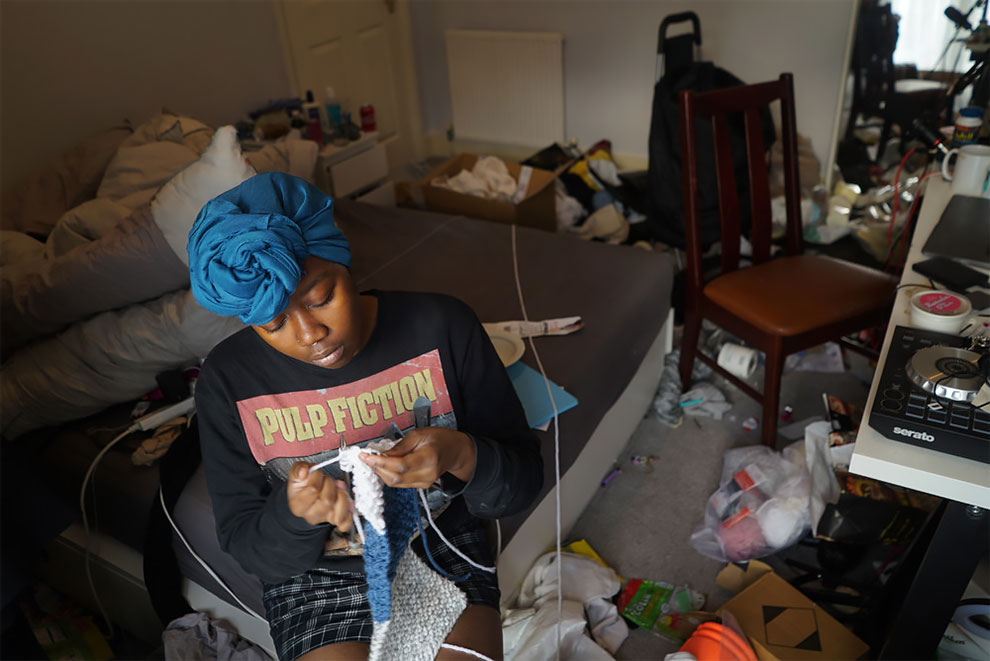 Managing Mental Health (single image). Untangling by Jameisha Prescod. “The isolation of lockdown exacerbated London film-maker Prescod’s depression, as she spent most of her time in the concentrated chaos of this room. ‘It’s where I work a full-time job, eat, sleep, catch up with friends and most importantly cry.’ Before long, she felt like she was ‘drowning in the clutter’. For escape, she turned to knitting, which helps to soothe her mind. It may not be a cure, but it does at least put ‘everything else on pause’ for a while”. (Photo by Jameisha Prescod/Wellcome Photography Prize 2021) 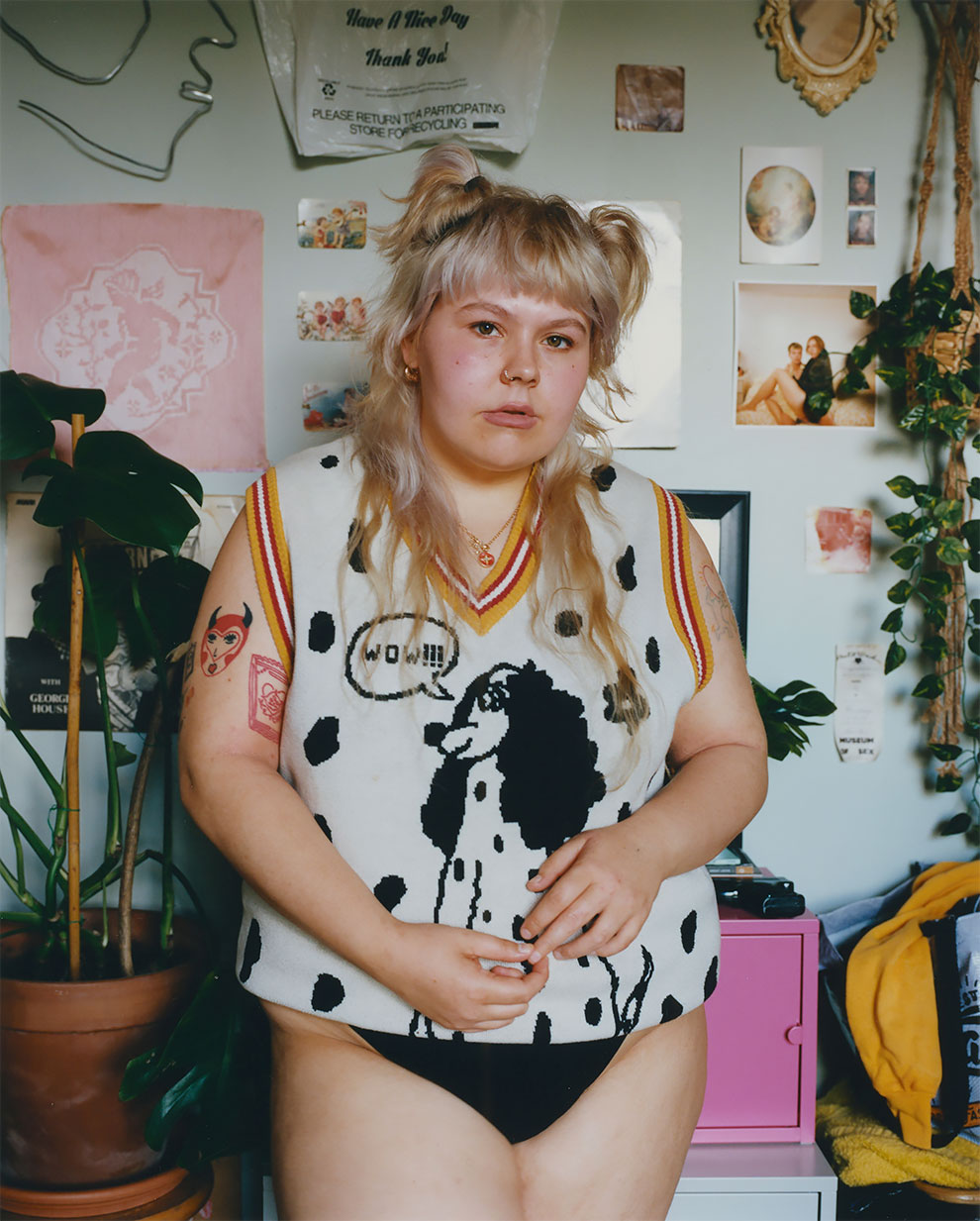 Managing Mental Health (series). ADHD Portraits by Nora Nord. “Rachelle (she/her) keeps her bedroom meticulously organised, an extension of her ADHD brain, filled to the brim with ideas and creativity. ‘I’ve always felt like I am too intense, but now that I understand that this is a symptom of my cognitive processing I feel unapologetic about it’”. (Photo by Nora Nord/Wellcome Photography Prize 2021) 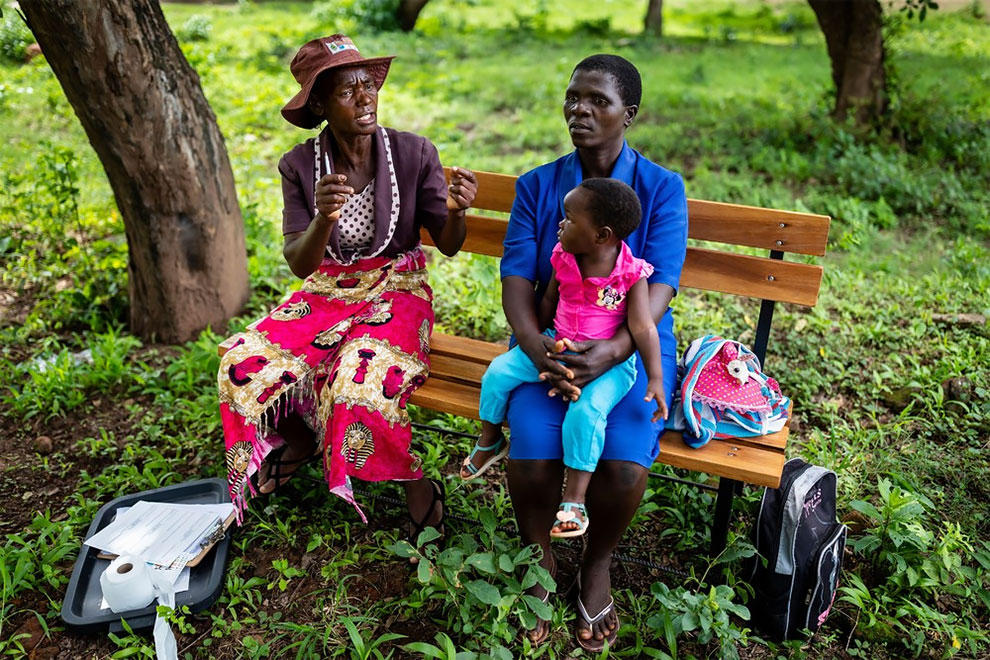 Managing Mental Health (series). Friendship Benches Zimbabwe by Brent Stirton. “Elizabeth Mapaire is a volunteer in the Zaka area. Here she talks to Sophia Nyamuwngi, who had been feeling suicidal after her husband left her. The grandmothers work as voluntary counsellors for those who would otherwise have no access to mental health services. The participants are taught a structured approach to identifying problems and to find workable solutions. Elizabeth referred her to a more experienced counsellor, and talked to her again later about potential support measures”. (Photo by Brent Stirton/Wellcome Photography Prize 2021) 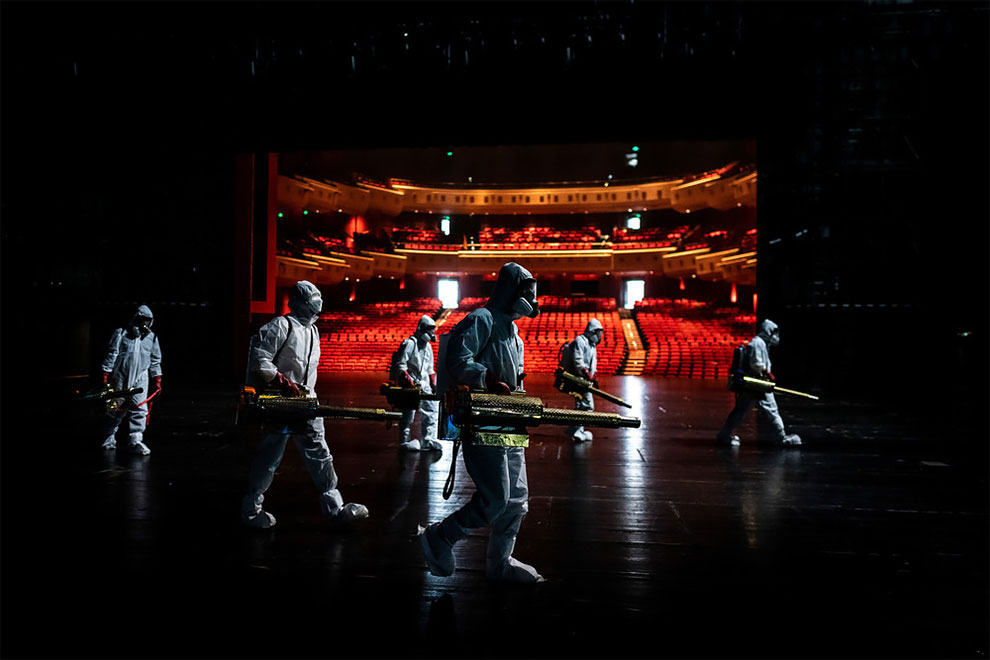 Fighting Infections (single image). The Time of Coronavirus by Aly Song. “The global fight against Covid-19 has been enormous, deploying many different tactics. Here, in Wuhan, China – near where the pandemic started – in April 2020, volunteers are disinfecting the Qintai Grand Theatre. They work for the Blue Sky Rescue team, the largest humanitarian NGO in China. As the pandemic has progressed, we have learned more about which measures are most effective. Some may do more to boost public confidence than prevent the spread of the virus”. (Photo by Aly Song/Wellcome Photography Prize 2021) 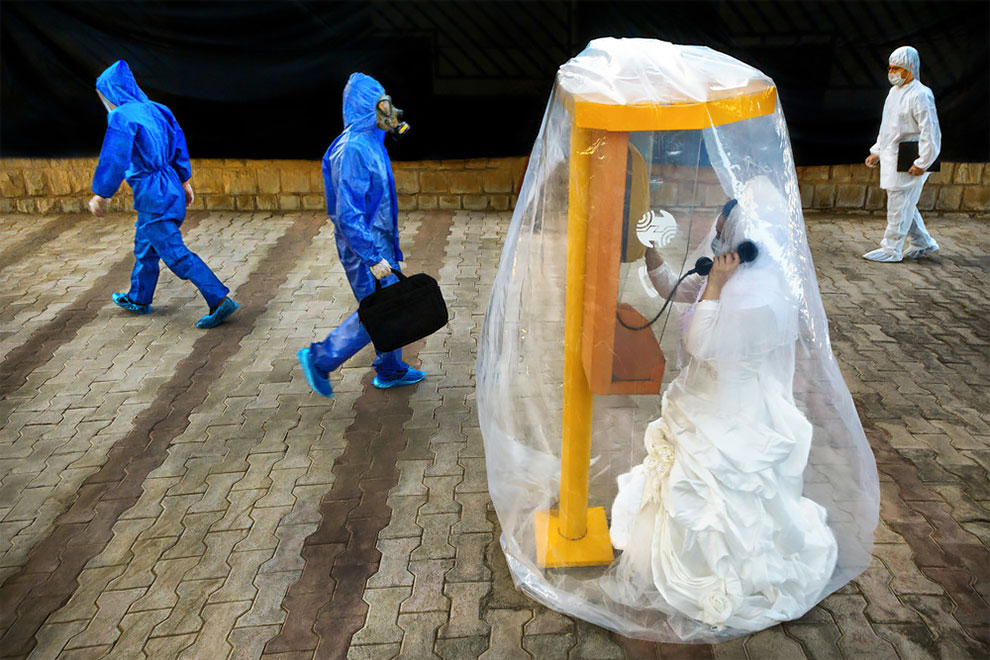 Fighting Infections (single image). Corona Bride by Hadi Dehghanpour. “Covid-19 and social distancing rules have disrupted life in so many ways, causing families all over the world to miss out on countless special occasions. This staged picture in Sabzevar, Iran, imagines how a bride and groom would have to interact if they were kept apart. No wedding ceremony, no cheering guests, no kiss. Love will have to adapt”. (Photo by Hadi Dehghanpour/Wellcome Photography Prize 2021) 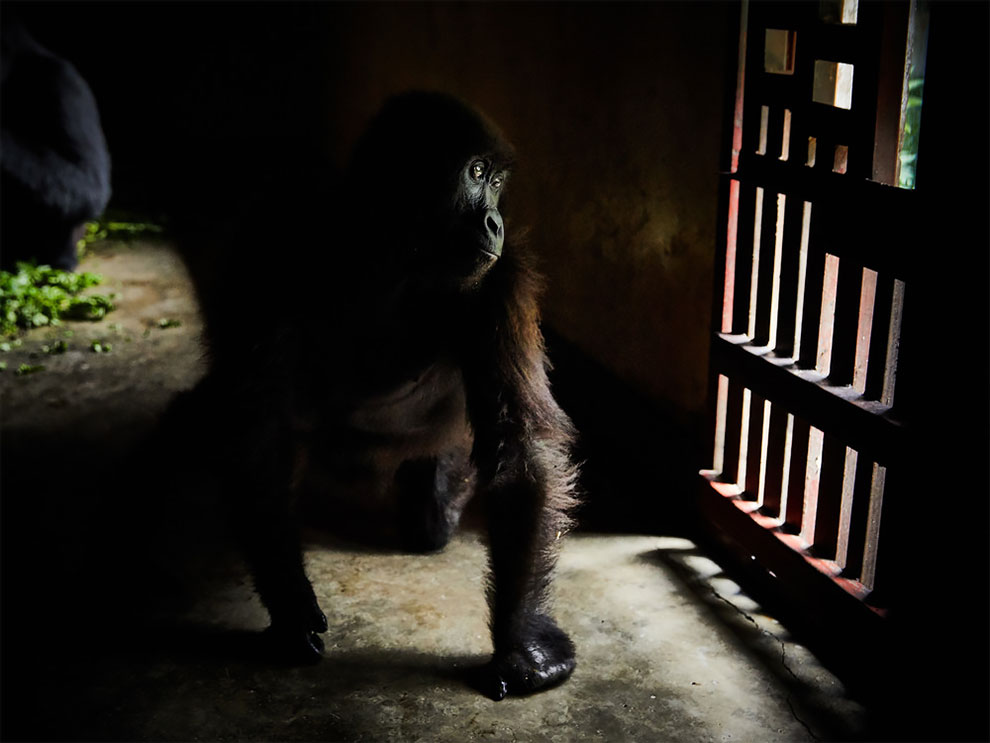 Fighting Infections (series). The Next Pandemic by Hugh Kinsella Cunningham. “Deadly new viruses can spread from animals to humans, and areas of rich biodiversity, such as the forests of the Democratic Republic of the Congo, have been implicated in the emergence of viruses such as HIV and Ebola.Muzuka is a six-year-old mountain gorilla. She was rescued from a poacher’s snare, losing her foot in the process. Virunga National Park operates a shelter for gorillas that have been orphaned or rescued, giving them a safe place to live, free of intrusive human contact”. (Photo by Hugh Kinsella Cunningham/Wellcome Photography Prize 2021) 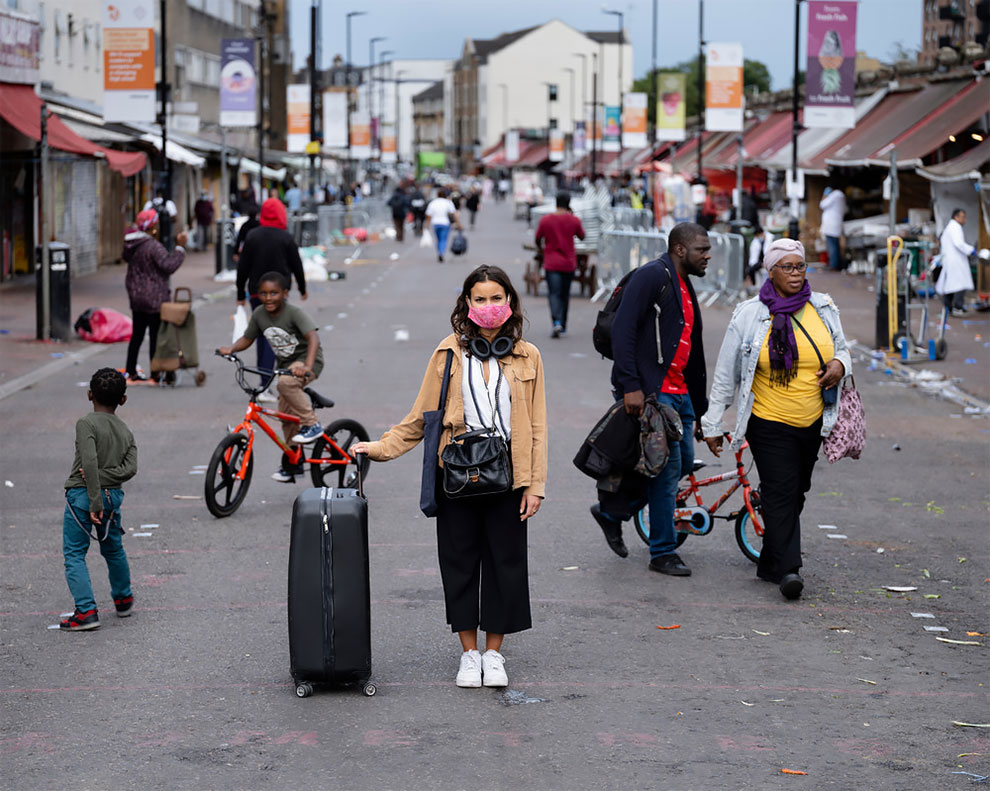 Fighting Infections (series). 2 Metres: Masked Portraits on Ridley Road by Gideon Mendel. “Hana Lameiras, IT project manager. ‘The biggest impact on my life is my redundancy. I cried when I heard because I was feeling like a failure and I was ashamed. Now I am grateful for where I’m at and excited because it taught me to be resilient and to have the courage to grow into the unknown’”. (Photo by Gideon Mendel/Wellcome Photography Prize 2021) 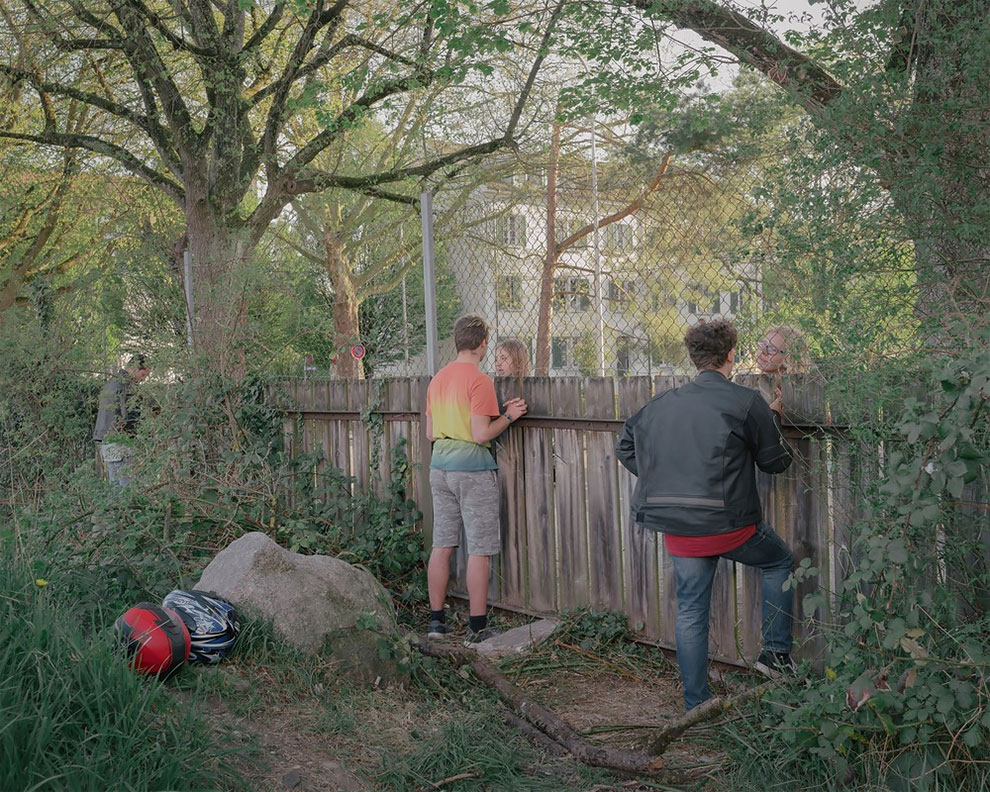 Fighting Infections (series). Measure and Middle by Ingmar Björn Nolting. “Young couples meet at the previously open border between Konstanz, Germany, and Kreuzlingen, Switzerland. The authorities put up a fence, and later a second one to force distancing more effectively. Here, on a stretch on private ground, there was only one old fence, allowing a little physical contact”. (Photo by Björn Nolting/Wellcome Photography Prize 2021) 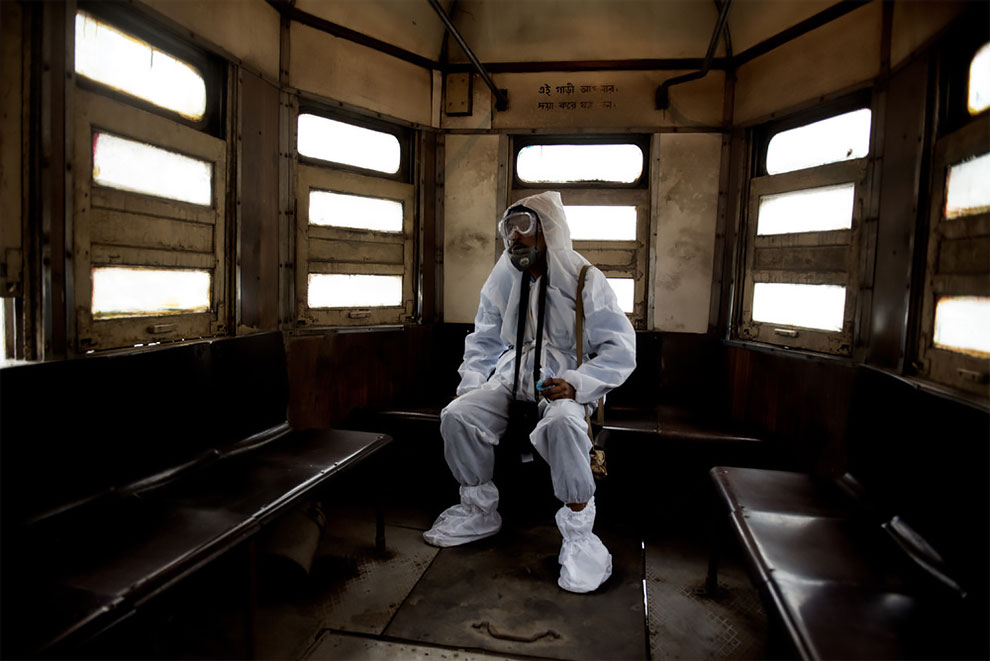 Fighting Infections (single image). Fighting Pandemic by Sudipto Das. “It’s exhausting. A tram conductor in Kolkata, India, wears protective clothing from head to toe even in the heat of a summer afternoon. This was when restrictions were easing after India’s first Covid-19 lockdown – public transport was running, but staff were advised to suit up like this. We’ve all grown used to saluting the efforts of healthcare workers, but plenty of other people in public-facing jobs have performed gruelling duties too to keep people safe”. (Photo by Sudipto Das/Wellcome Photography Prize 2021) 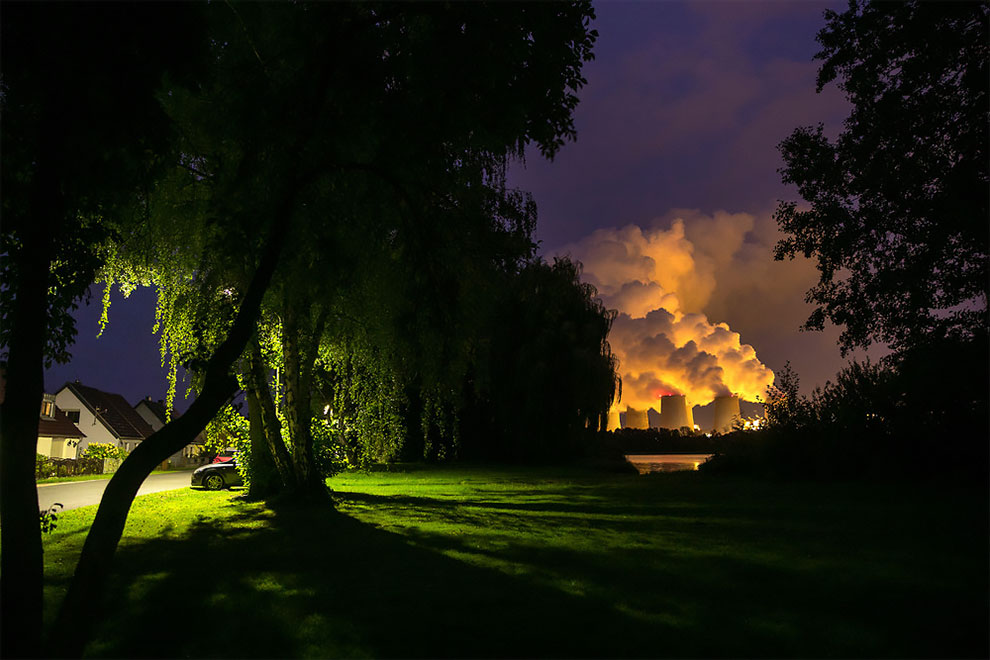 Health in a Heating World (single image). Eliminating Fossil Fuels in Germany by Krisztián Bócsi. “Prevention is better than cure. The faster the world can cut greenhouse emissions, the better we’ll be able to avoid the health dangers posed by global heating. A big part of this will come from replacing fossil fuel use, like the Jänschwalde lignite power plant in Peitz, Germany. Lignite, also known as brown coal, is one of the most carbon-intensive sources of power. The German government is committed to eliminating coal use by 2038 as the country moves more into renewables”. (Photo by Krisztián Bócsi/Wellcome Photography Prize 2021) 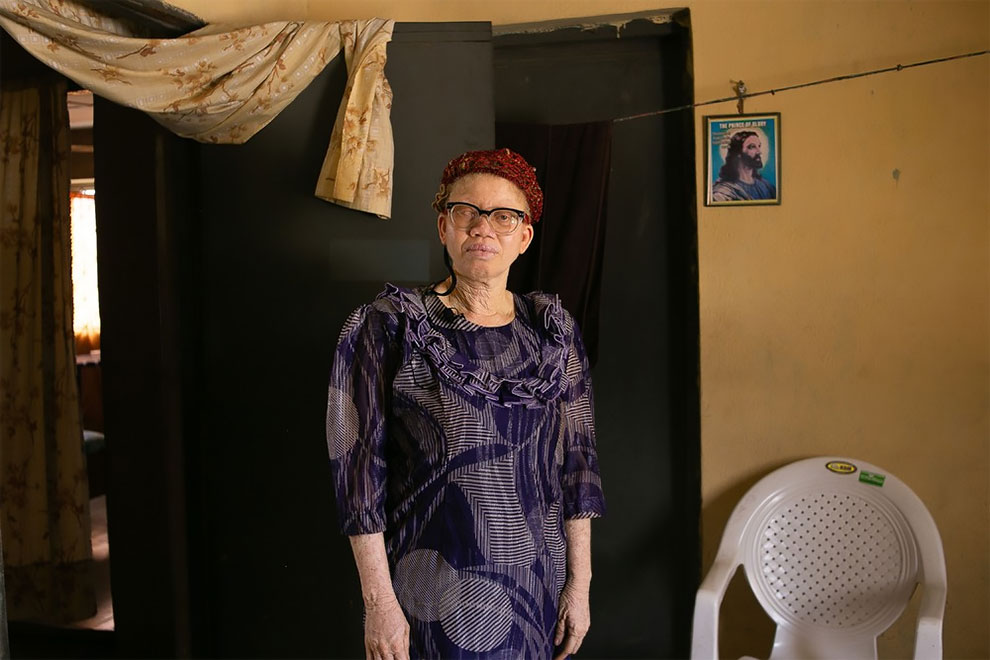 Health in a Heating World (series). Sun, Not Salt by Ayomitunde Adeleke. “There’s evidence that rising temperatures are increasing the risk of skin cancer – a particular danger to people with albinism. In Nigeria, the connection is not always well understood, and people often think the symptoms are caused by eating too much salt. Victoria lost her brother and sister to skin cancer. Their jobs exposed them to harsh sunlight every day. After uncertainty about why they were getting ill, they were eventually taken to hospital, but by then it was too late”. (Photo by Ayomitunde Adeleke/Wellcome Photography Prize 2021) 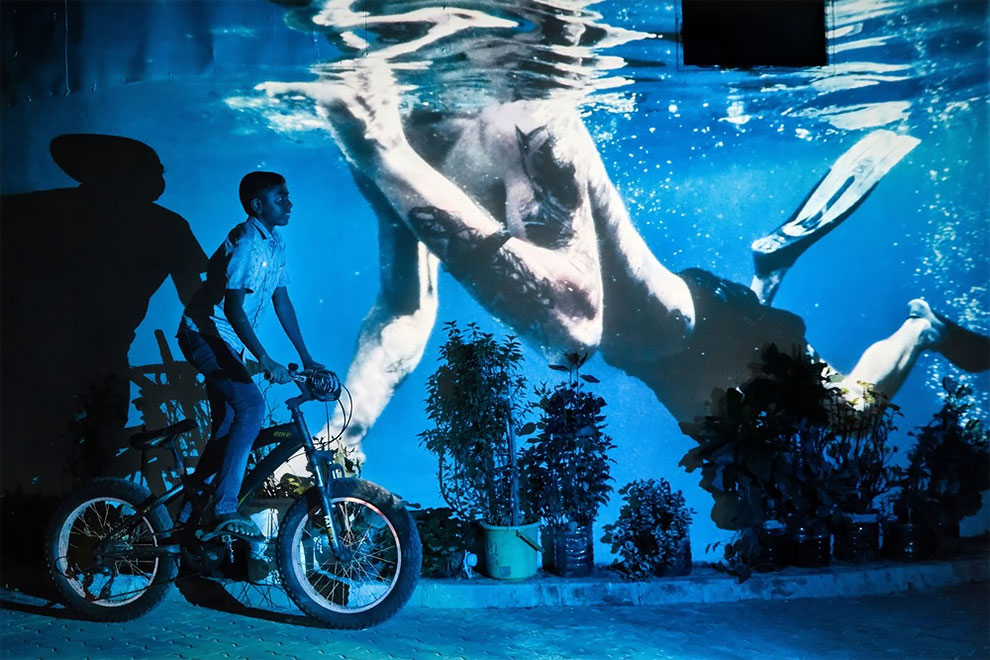 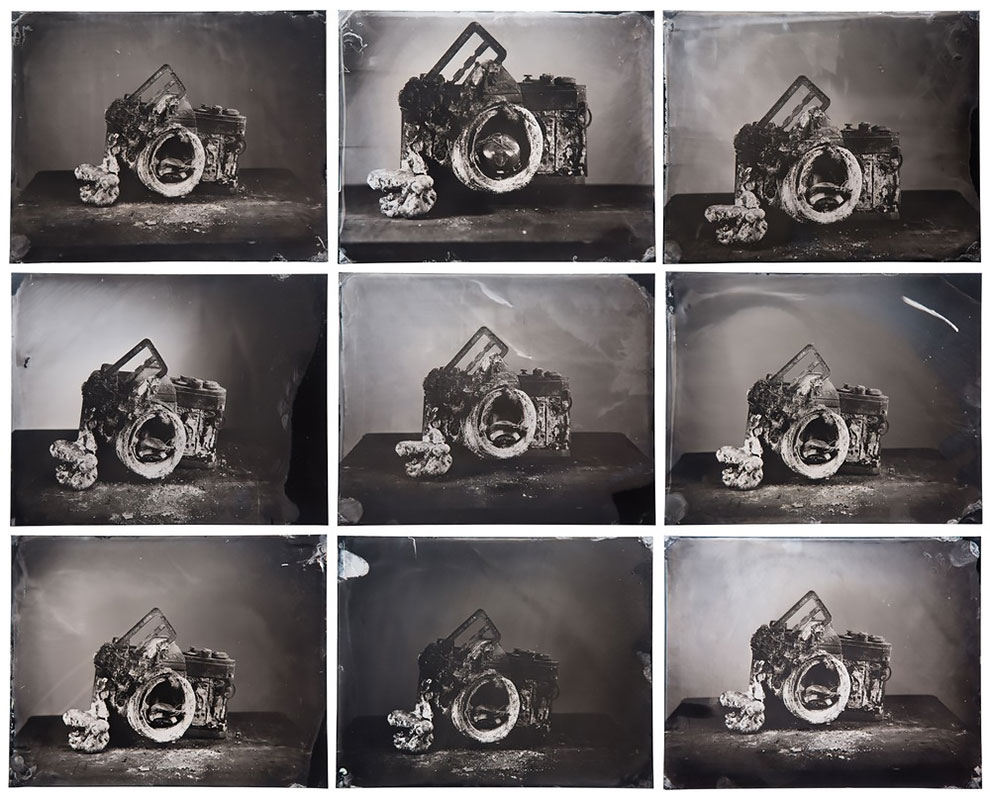 Health in a Heating World (series). Burnt Memory: Archaeology from a Climate Emergency Gideon Mendel and Jonathan Pierredon. “The Carr fire in 2018 was one of California’s most devastating wildfires ever, spreading across dry land and accelerated by a tornado. It destroyed 359 sq miles of land and forced 36,000 people to evacuate, and its smoke spread across five states. Eight people died. Rising temperatures and extreme weather events make fires like this an ever-greater threat to human life. Mendel worked with Pierredon to create tintype photos of damaged objects found in the ruins of people’s homes”. (Photo by Gideon Mendel and Jonathan Pierredon/Wellcome Photography Prize 2021) 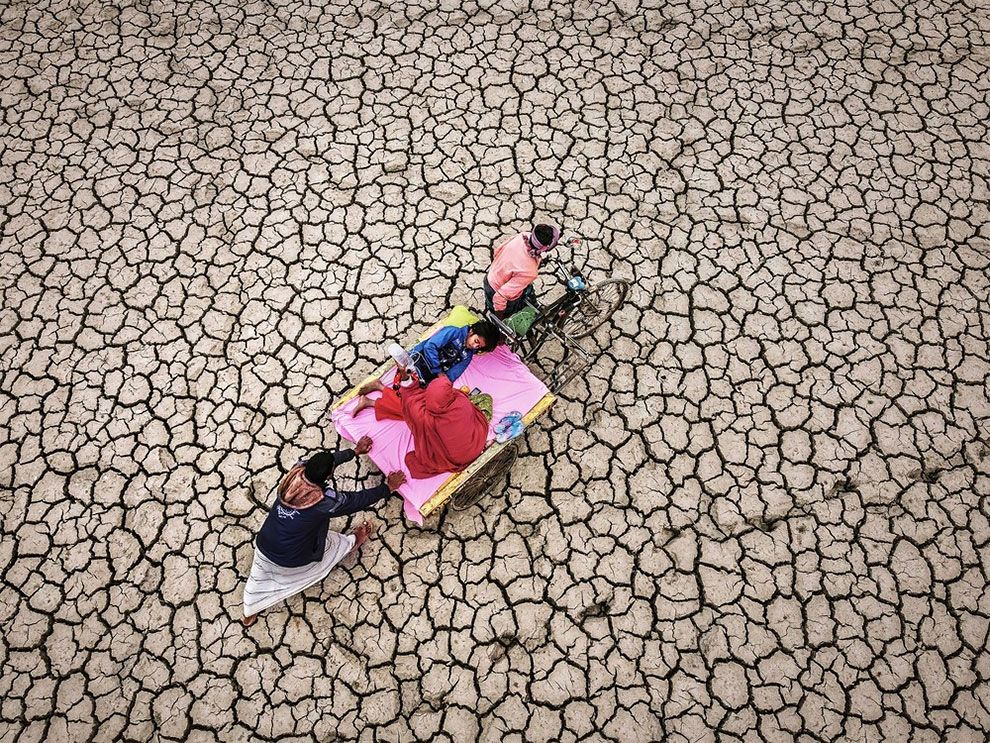 Health in a Heating World (single image). Tears of Drought Sharwar Apo. “Parents take their child to hospital in Rajshahi, Bangladesh, 10-15 miles across this drought-parched land, the mother holding a saline drip all the way. For much of the year, the land is dead like this, but for four months it is flooded. Either way, safe drinking water is scarce, crops can’t grow, health problems abound – from dehydration to infection – and transport is limited. This family’s journey succeeded, and the child was treated for her diarrhoea. But many of those who attempt this journey are not so lucky”. (Photo by Sharwar Apo/Wellcome Photography Prize 2021) 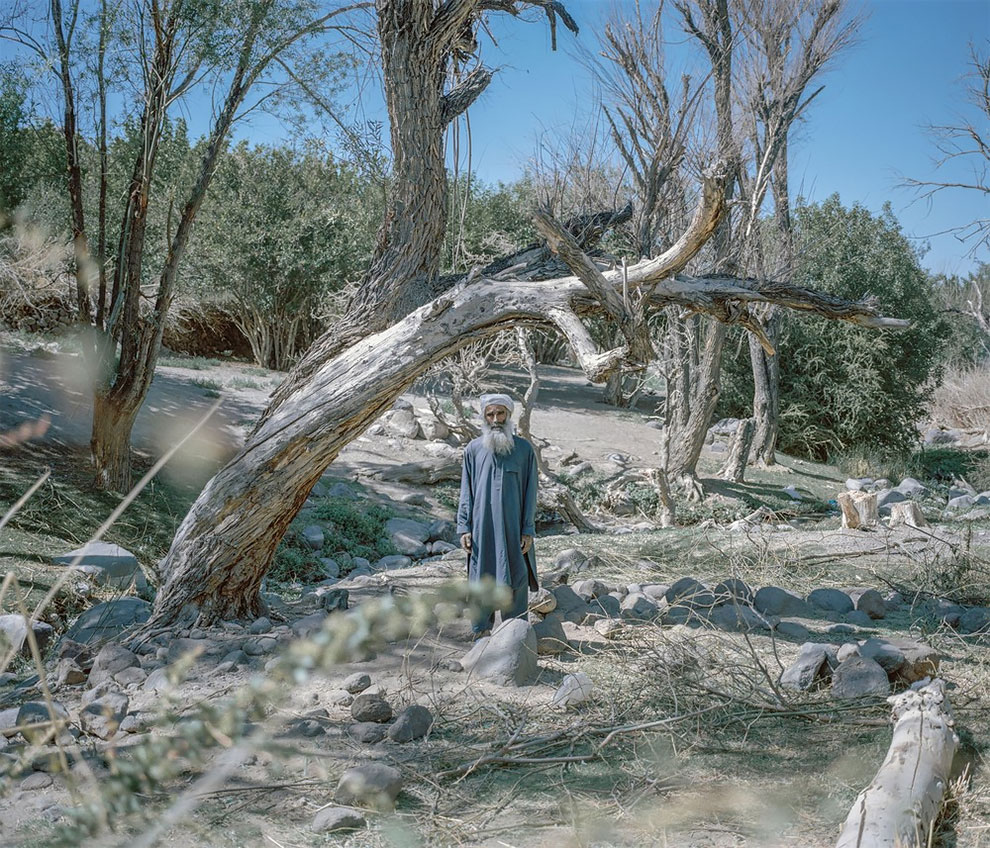 Health in a Heating World (series). An Elegy for the Death of Hamun Hashem Shakeri. “For centuries, Sistan and Baluchestan has been a fertile region of Iran, with forests and productive cropland. But rapid climate change is turning it into a desert, bringing drought, hunger, unemployment and mass emigration. Abdullah, who is fasting, is resting under a fruit tree that has recently dried out and been infested by beetles. There are still plenty of green trees around, but he believes that farming will soon become unviable here”. (Photo by Hashem Shakeri/Wellcome Photography Prize 2021) 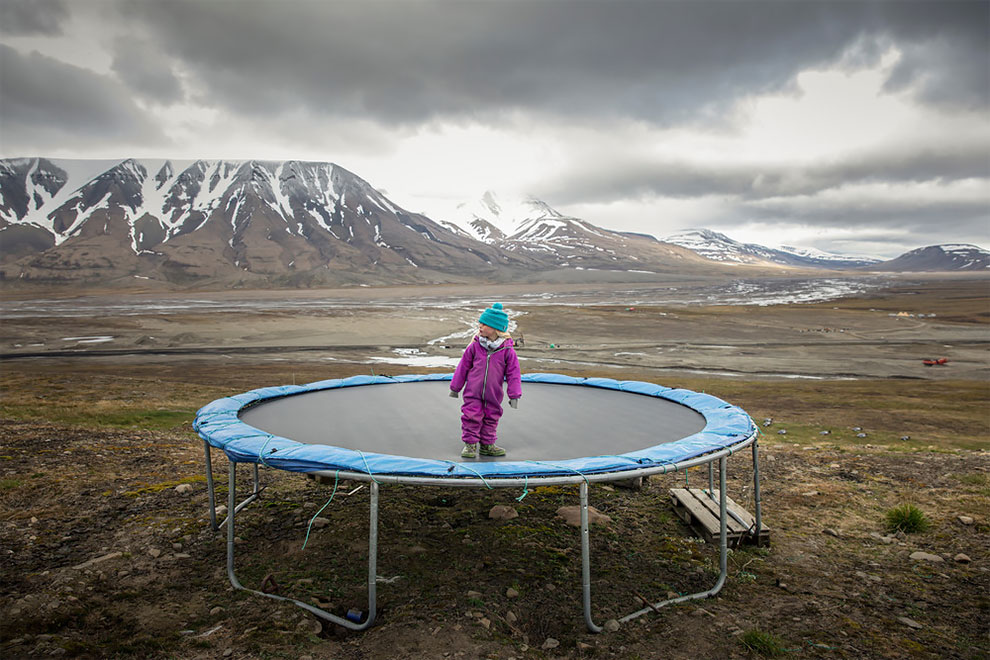 Health in a Heating World (single image). The Family at the End of the World by Michael Snyder. “Here, on the edge of the northernmost town in the world, a little girl has gone out to play. Saga Bernlow and her family live on the Norwegian archipelago of Svalbard in the Arctic ocean, where temperatures are rising fast. Their dogsledding business faces an uncertain future as the snowpack melts earlier every year. And other risks lurk too: scientists fear that melting permafrost may release long-extinct bacteria or viruses back into the atmosphere”. (Photo by Michael Snyder/Wellcome Photography Prize 2021)