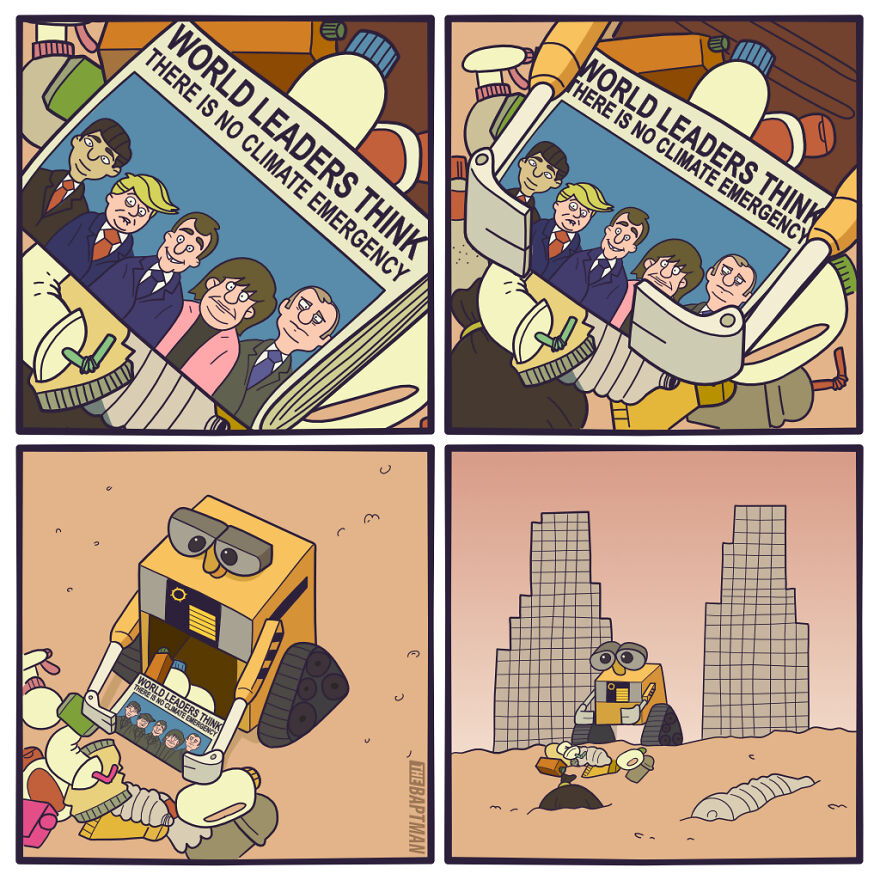 “My name is Baptiste Drausin, a.k.a. The Baptman, and I’m a self-taught artist. I grew up with pop culture, and I love to use it. I’m particularly a fan of DC comics. When I began to draw in 2017, I did a mashup with two characters from pop culture. Now I use them to talk about ecology issues. Check my illustrations out, and take a look at my Instagram for more of my content.” 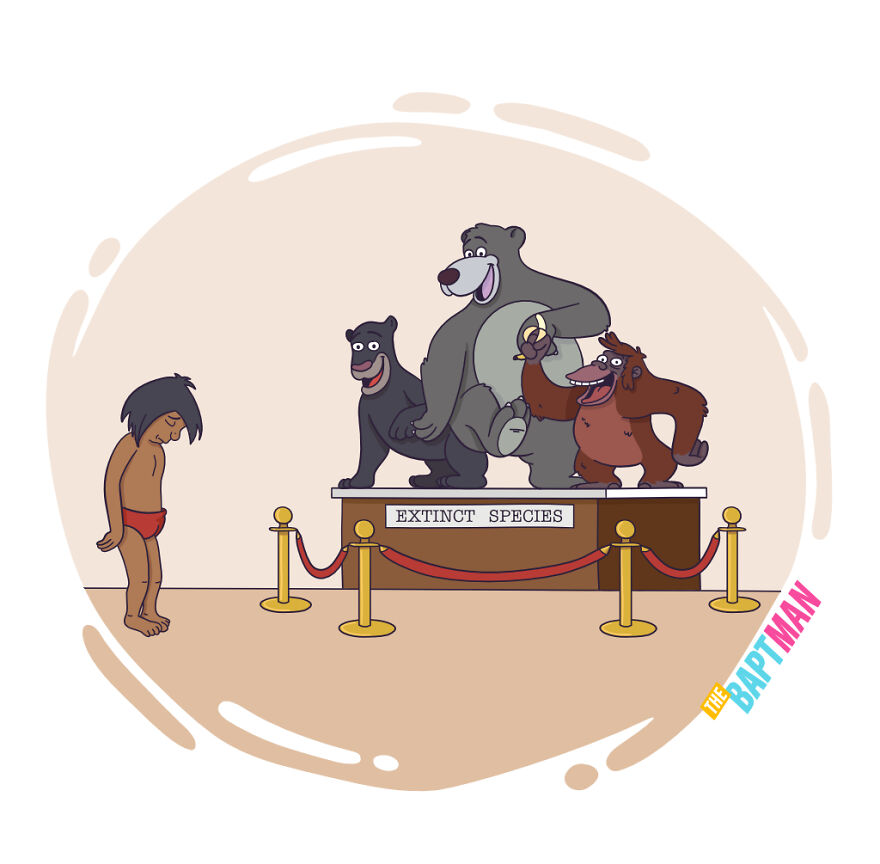 “I’ve drawn ever since I was young, but I never took classes; I’m self-taught.

I have also been a massive fan of comics, movies, and TV shows. That’s why I always wanted to do drawings that used pop culture.

I started to draw on Instagram in 2017. I started with doing mashups (a mix of 2 characters from pop culture). But it was in October 2018 that I started drawing on ecology.” 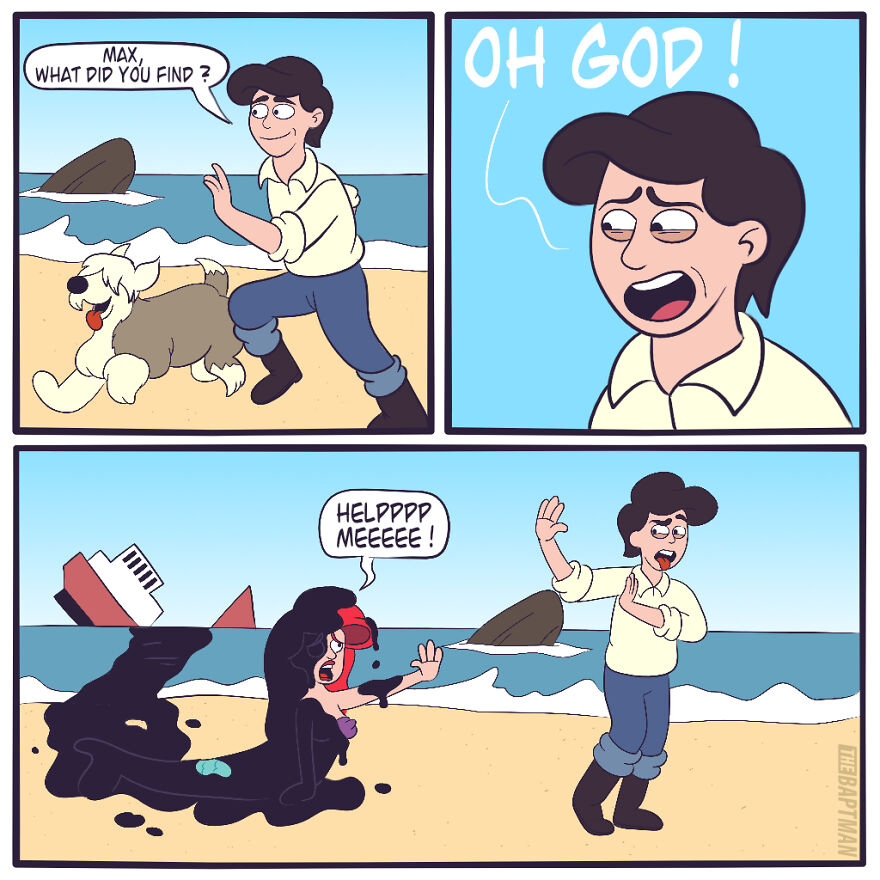 “I was returning from a year of traveling in Australia and Asia, and I saw pollution everywhere, even in places where there were no people. When I was looking for an idea for the 2018 Inktober, I spoke with a friend. He advised me to talk about the pollution and what I had seen. So I decided to speak about ecology by using pop culture to touch on what we love the most and shock people who would see the drawings,” The Baptman told Bored Panda. 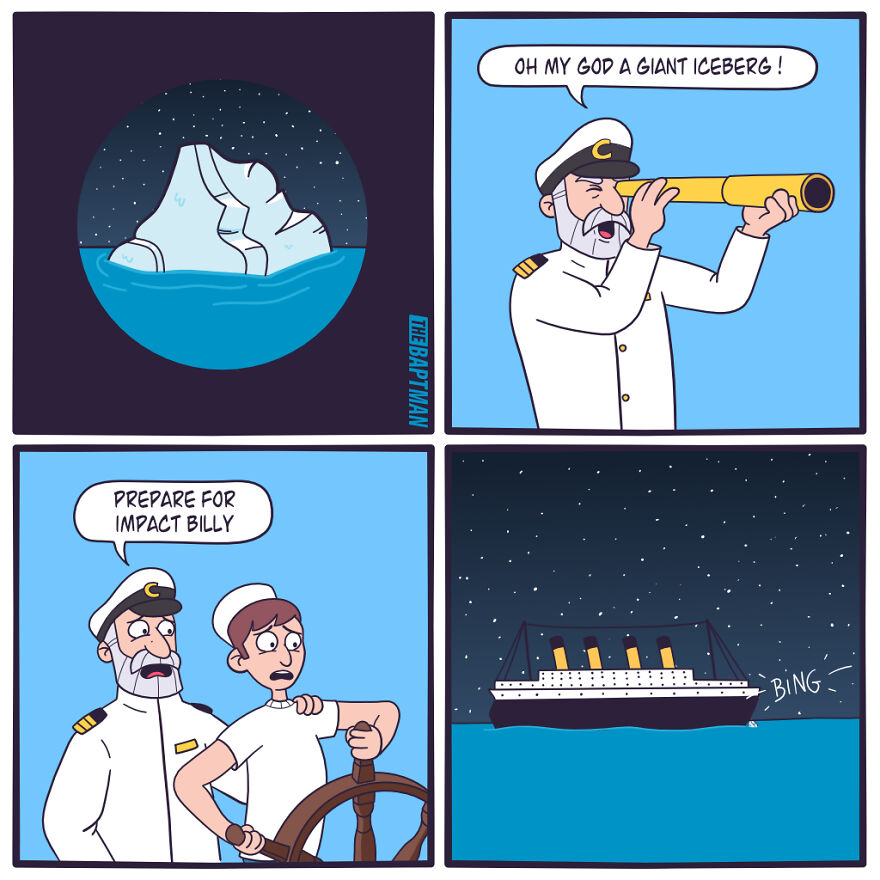 “I have grown up with Disney, Star Wars, and Comics, so it was essential to use these characters for me. As for superheroes, I have two favorites: Batman (hence the Instagram name Baptman) and Green Lantern. Batman because it’s a Human who wants to change his city to Make a better place. Green Lantern because he is stubborn and wants to save people whatever happens.” 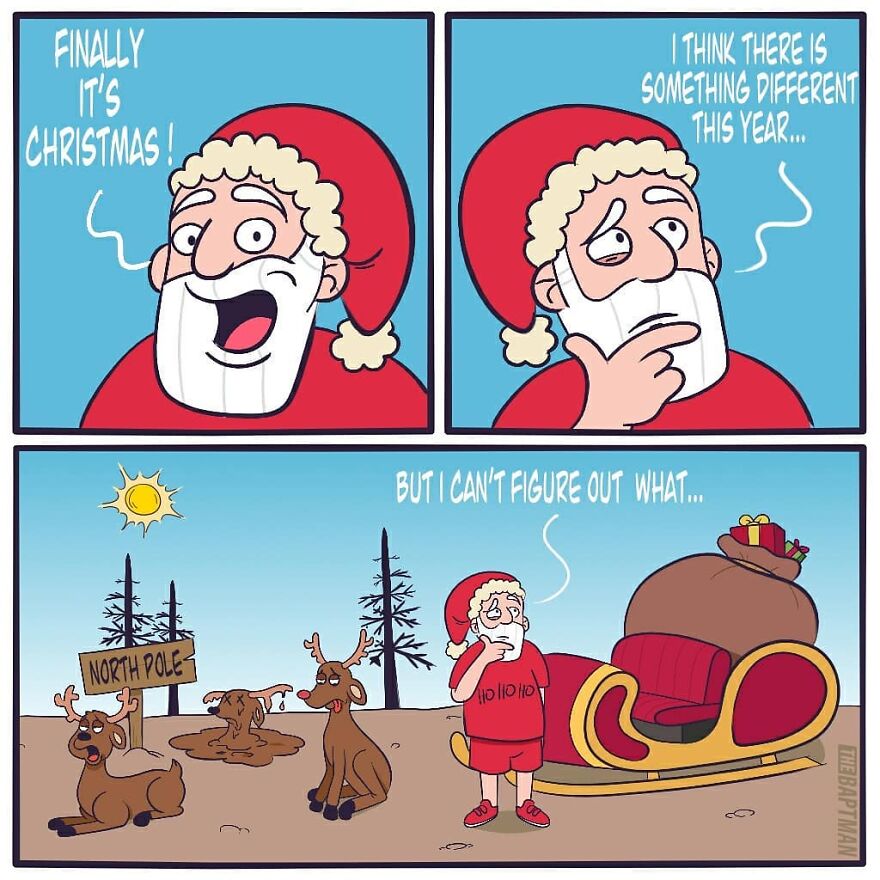 “I think a lot about global warming and ecology, and I think we need to change now. A few days ago, the IPCC report gave back the keys to act and save humanity. We don’t just destroy the planet as if it will have no consequences; we will die in the end, too. Planet earth will continue to live after us. We will only be one more extinction. But if we want to get past that, we must all change our behavior, our way of life.” 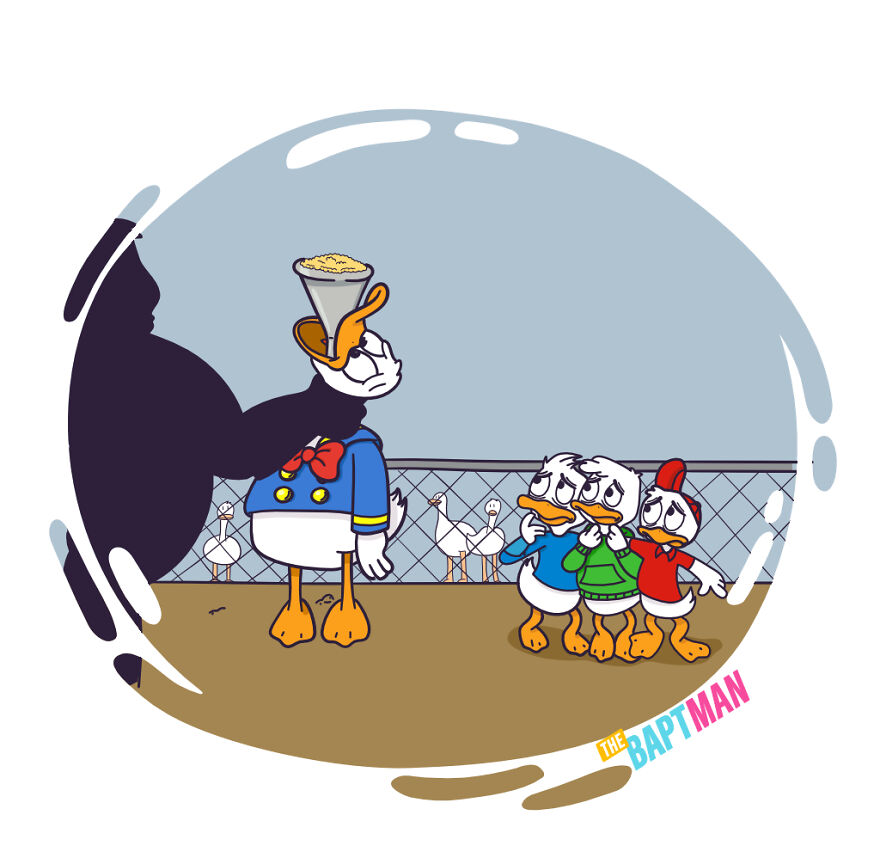 “As for me personally, things are going well, even if there is global warming, covid, and other nasty stuff going on worldwide.

I try to publish a Book about ecology, and I work with a friend on a New Instagram page about drawing and pop culture. So check out and follow my Instagram to get updates on that.”

The Lion Long And The Hunt 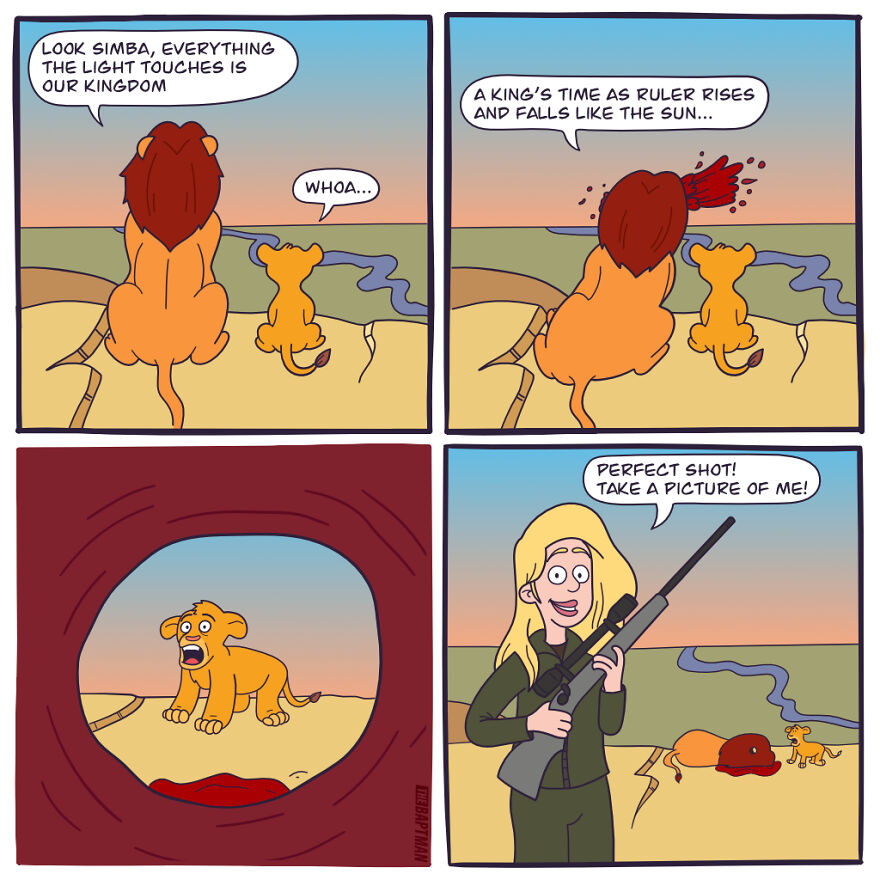 Godzilla Against The Plastic 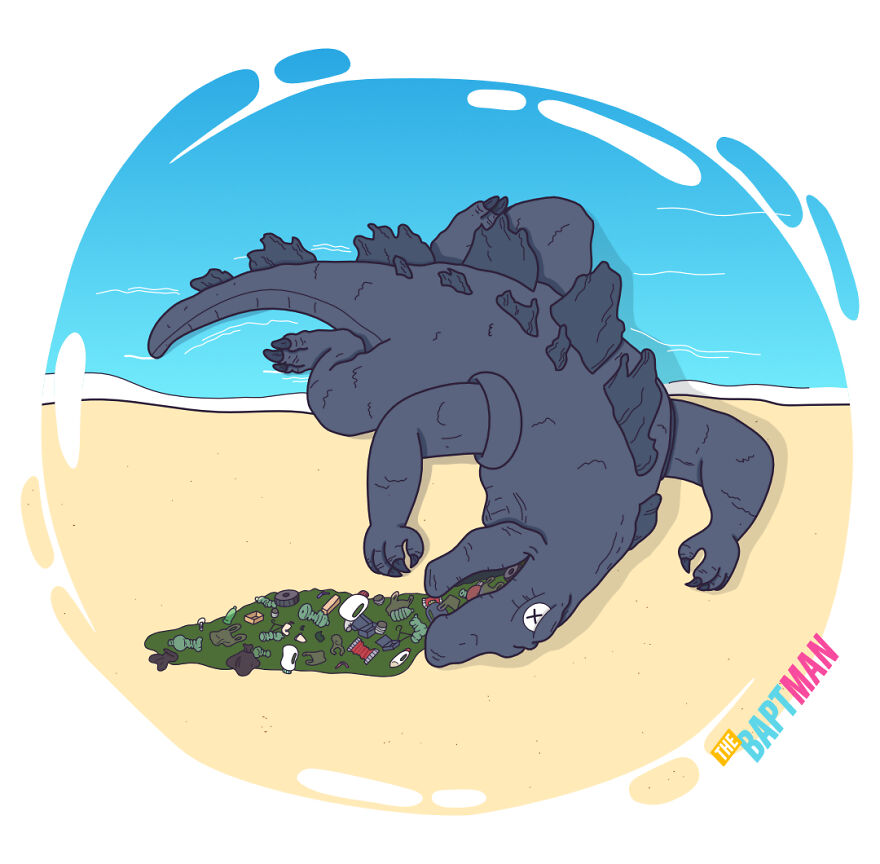 Ariel And The Ocean Trash 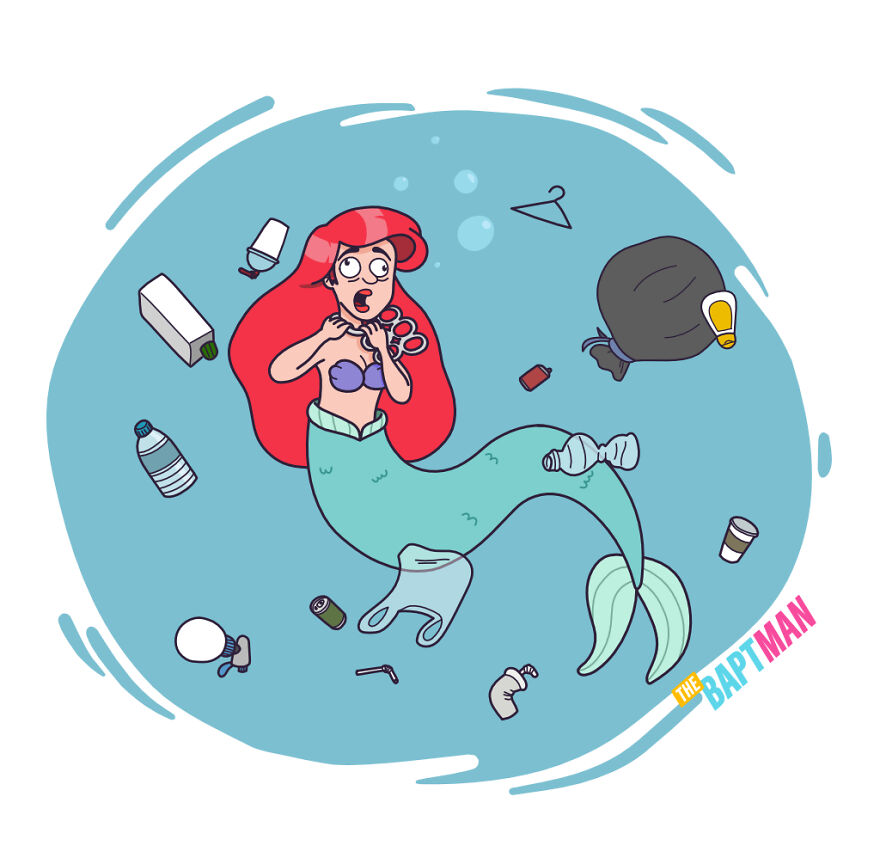 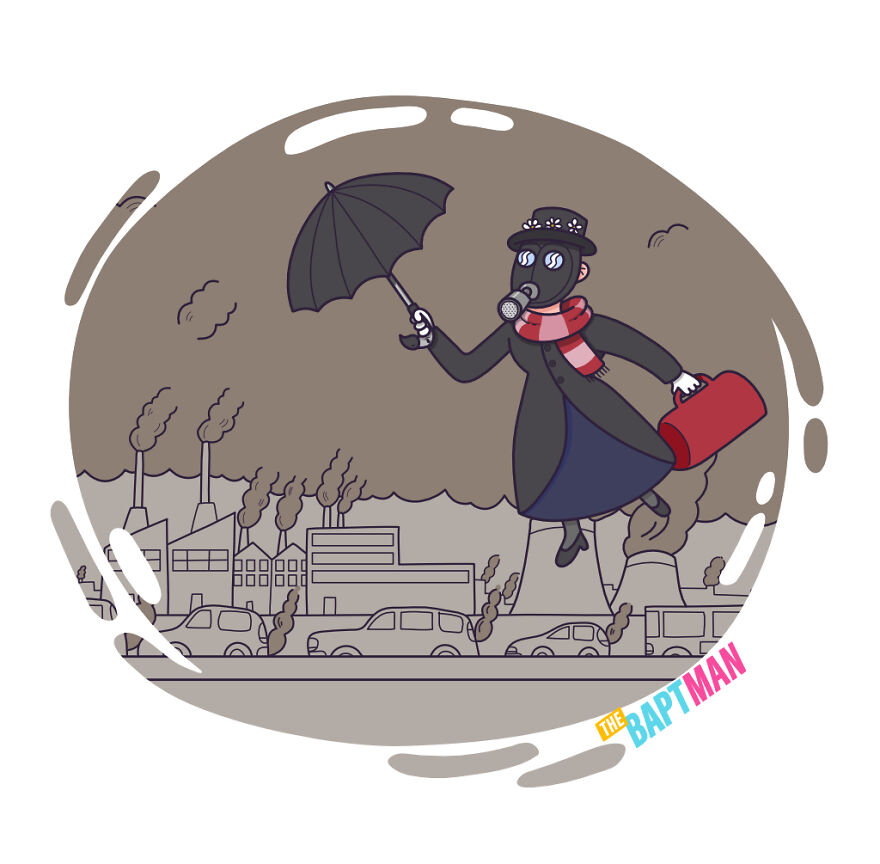 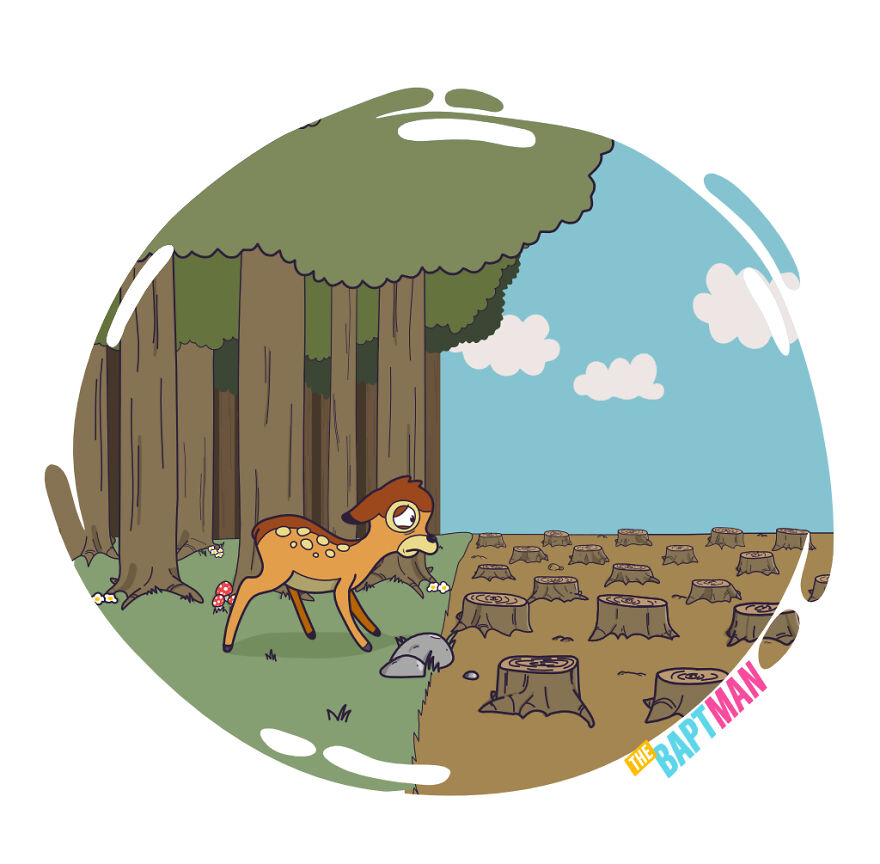 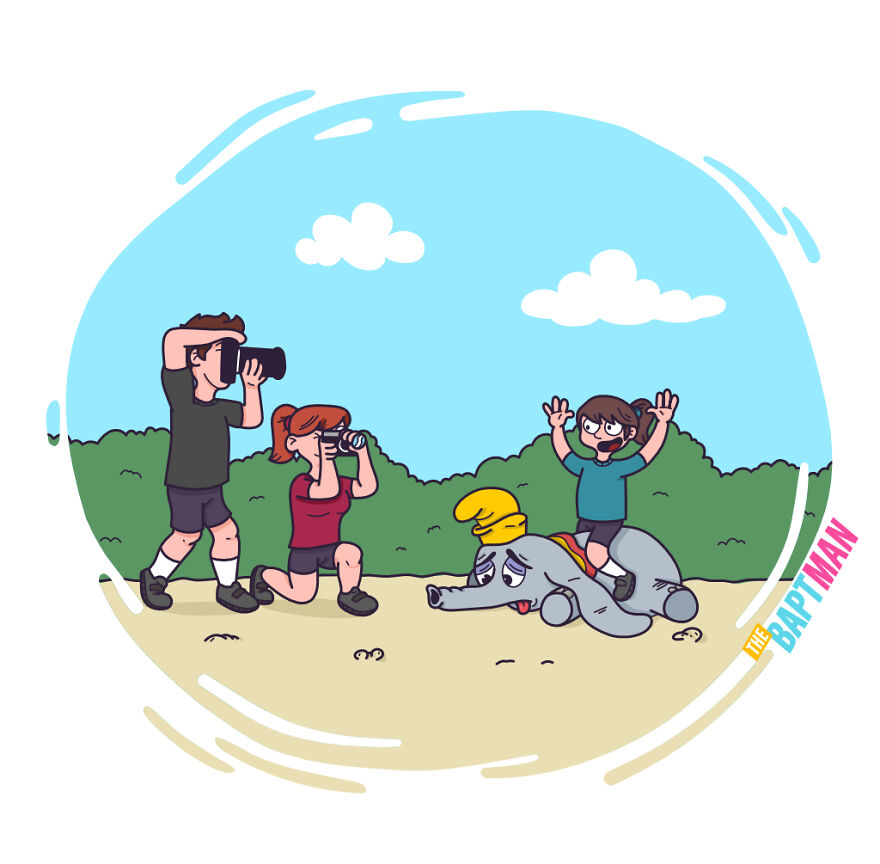 The Beast And Animal Experimentation 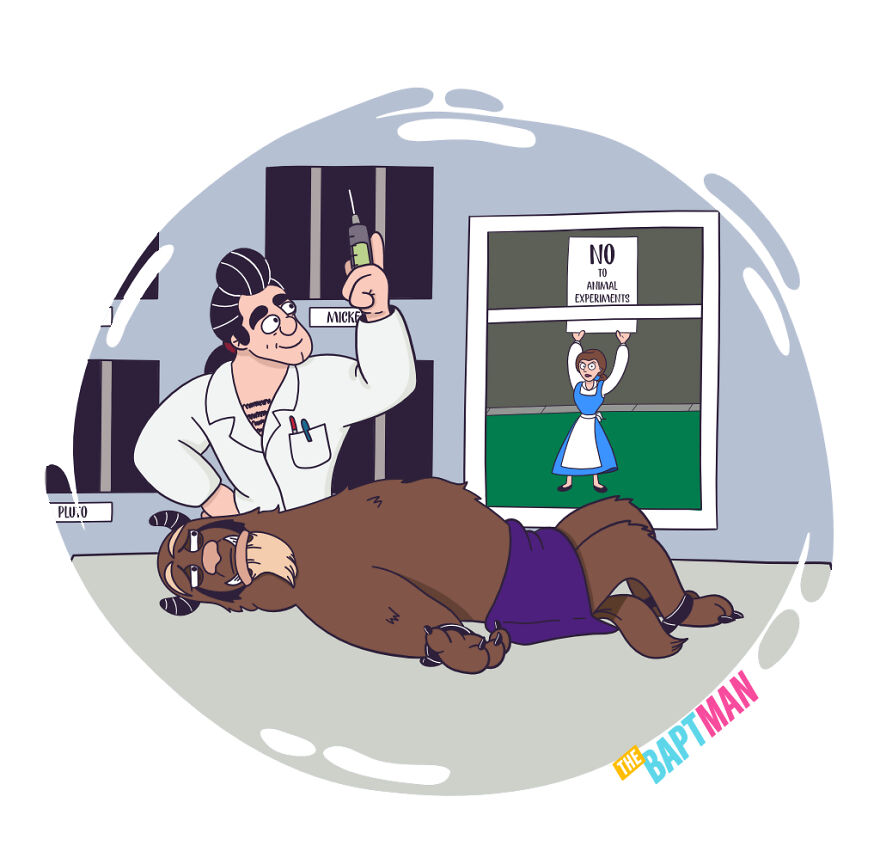 Winnie The Pooh And Bee’s Extinction 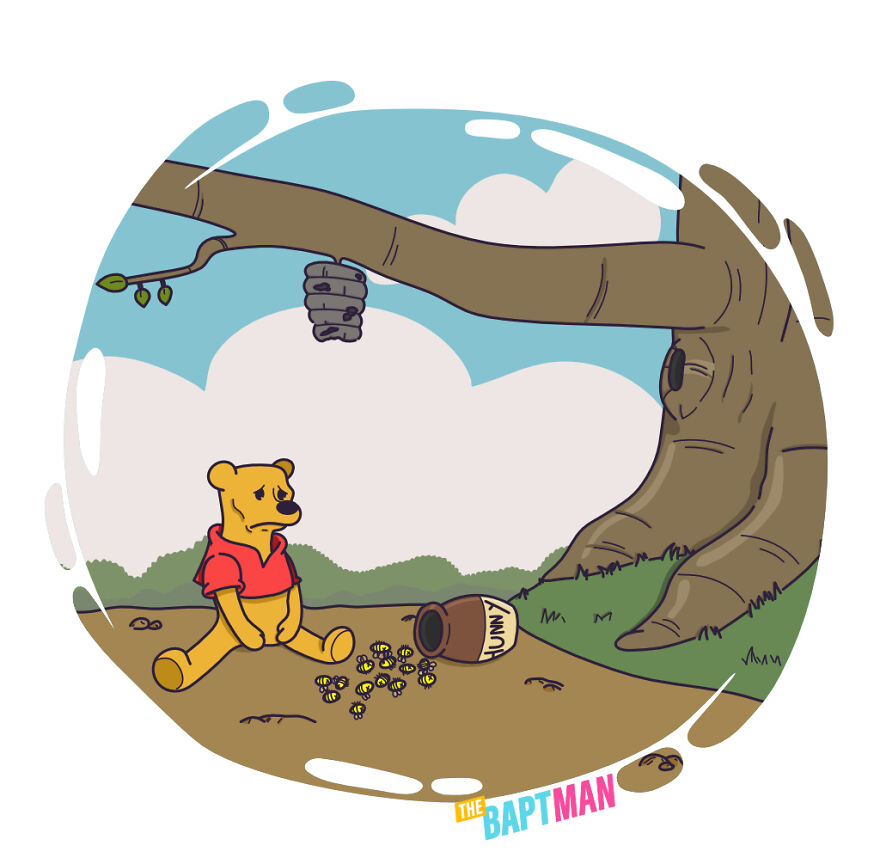 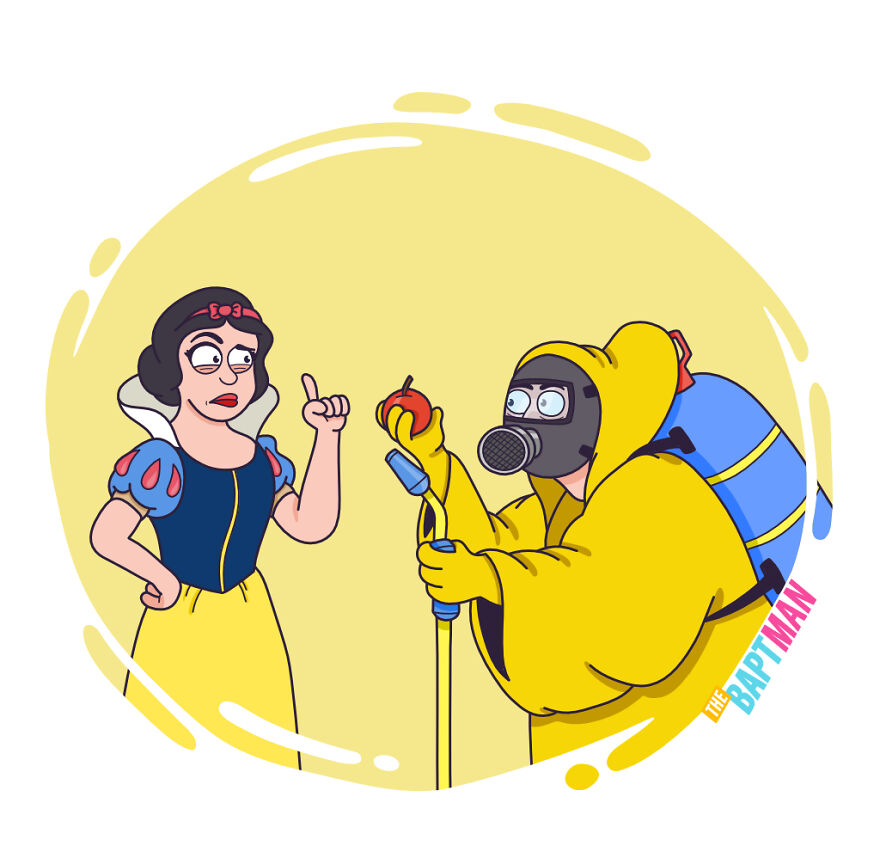 Pinocchio And The Plastic 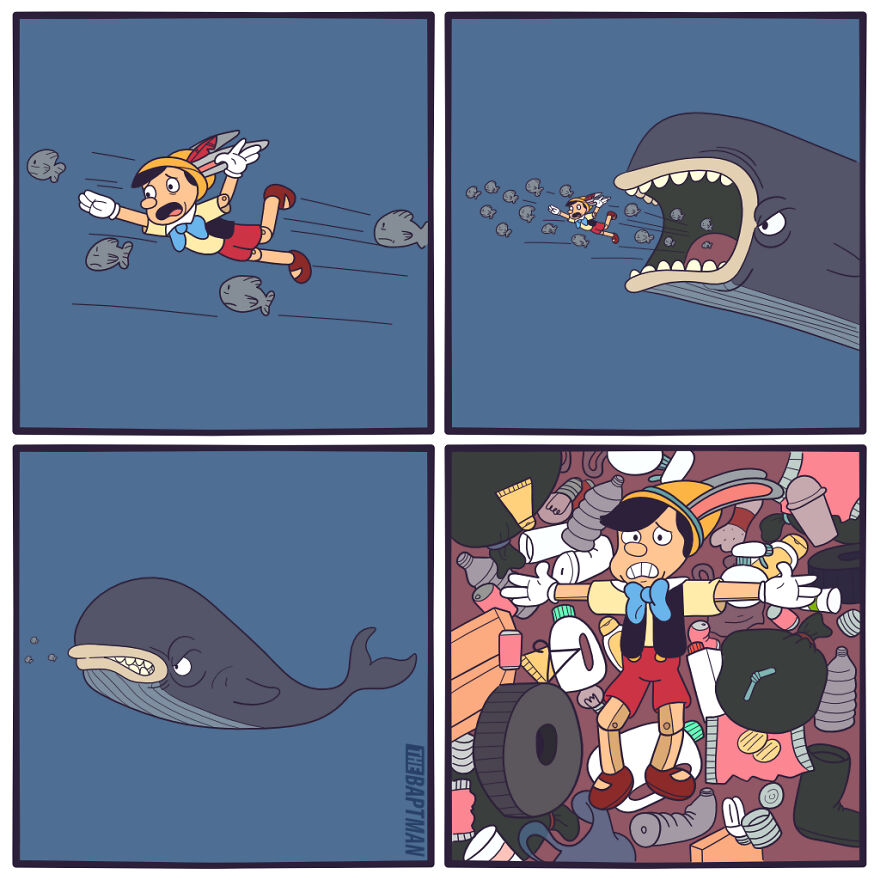 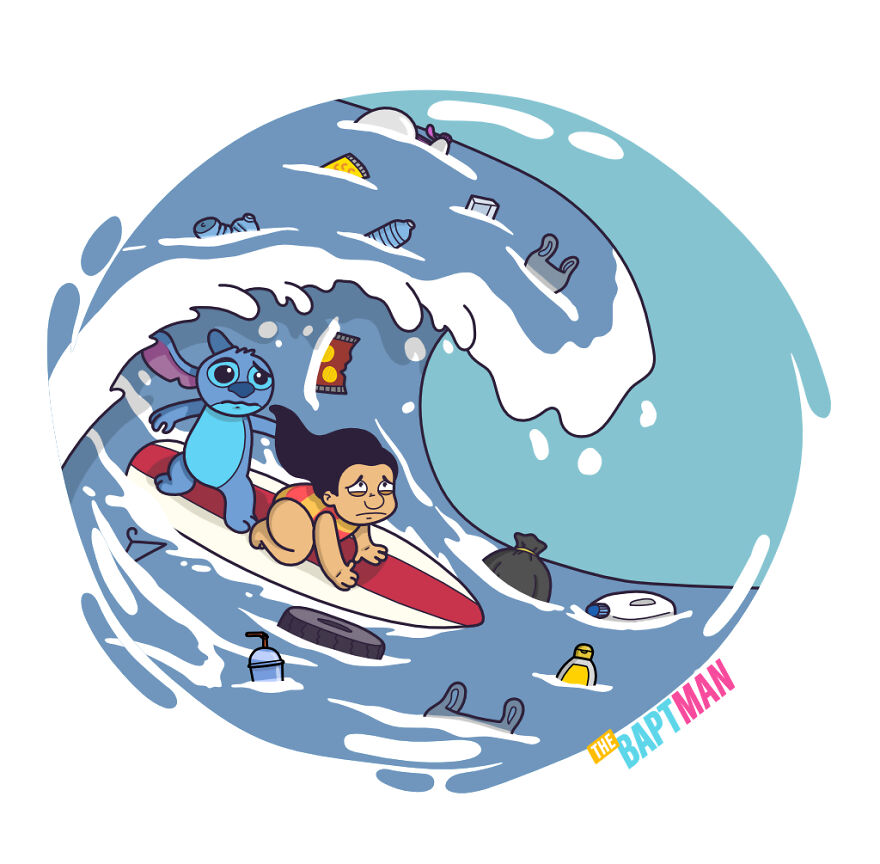 Superman And The Melting Glaciers 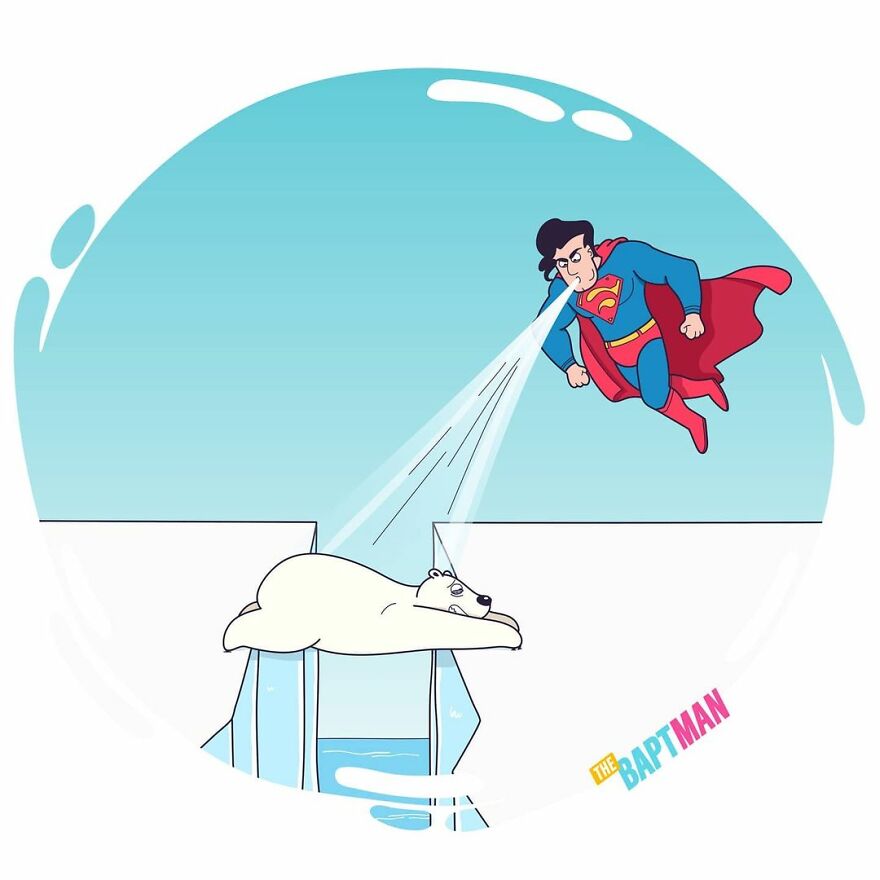 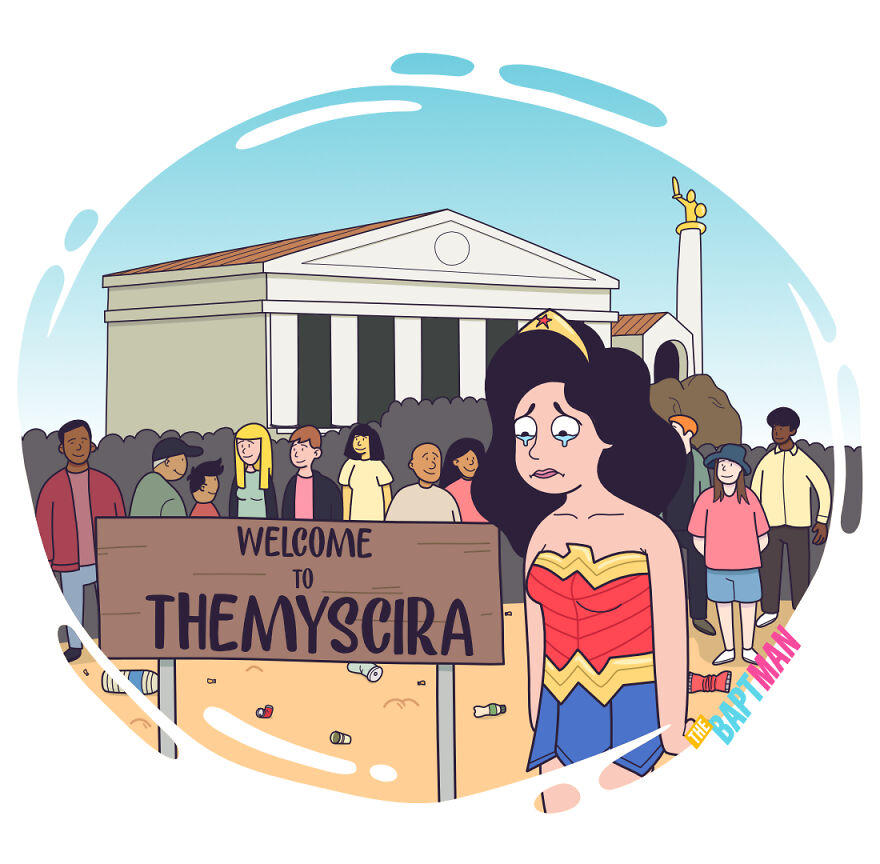 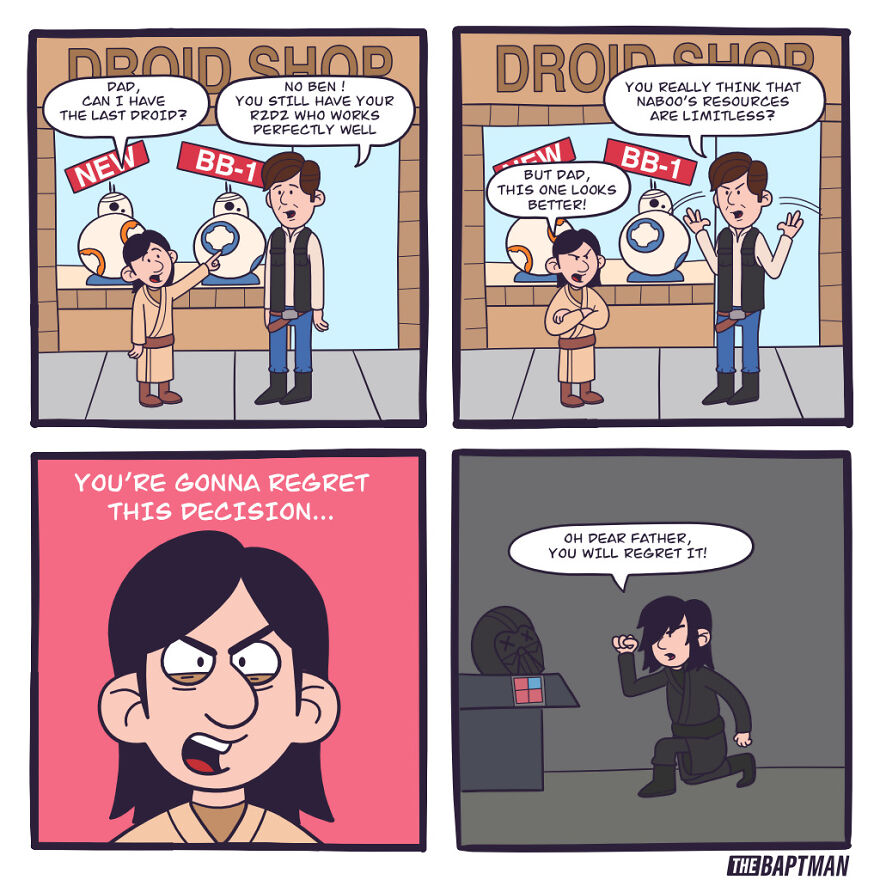 Don’t Miss PETA’s Cheeky New Ads That Warn Drivers, ‘Meat Interrupts Your Sex Life!’
Urban Swan: A Photographer Took Stunning Pictures Of A Ballerina In The Streets Of Romania
Seeing spots: Yayoi Kusama Exhibition at Tate Modern
Sensitive Ballerina Watercolour Portraits By Liu Yi
Artist Paints Stunningly Realistic Portraits on His Hand and Stamps Them on Paper
If Famous Faces From Classical Paintings Discovered Selfies
The Real Power Of Healing Crystals
Benny Harlem And His Record-Breaking Hair
Meet Brazilian 'Human Barbie' Andressa Damiani
Artist Shows Us What Famous Characters Would Look Like In Real Life
Hilariously Bad Celebrity Portraits by Twitter Picasso
Dressed Cats: Postcards From The 1950's By Artist Eugen Hartung Published By Alfred Mainzer, Inc.
Yung Cheng Lin's Human Art Illusions Address Female Body Modification
36 Widespread "Truths" That Are Totally Fake
What If People From Classical Paintings Attended A Music Festival
The Strikingly Unique And Colorful Art Of Hiroyuki-Mitsume Takahashi
Kazakhstan Is Photoshopping Their Leader’s Photos And They Are Not Even Trying To Be Subtle
Absolutey Stunning Artworks And Funny Soviet Posters In The Pin-Up Style By Valery Barykin
"Before I Die, I Want To..."
Obama, Merkel, And Putin As Leading Actors In Famous Movies
Business Cards Of The Real Street Gangs From All Around The World
Artist Modernizes Disney Characters By Placing Them In All Sorts Of Interesting Scenarios
The Sculptor Created a Series of Bizarre Sculptures that Represent the Skeletons of Famous Cartoon Characters
Artist Isabella Montan Creates Pantone-Inspired Pop Culture Graphics
Baptiste Drausin, Baptman, cartoons, characters, comics, ecology, problems, society