A look at a selection of the winning images from the Budapest International Foto Awards – a platform for photographers from all levels and genres to share their best images with the creative community in Hungary and eastern Europe. 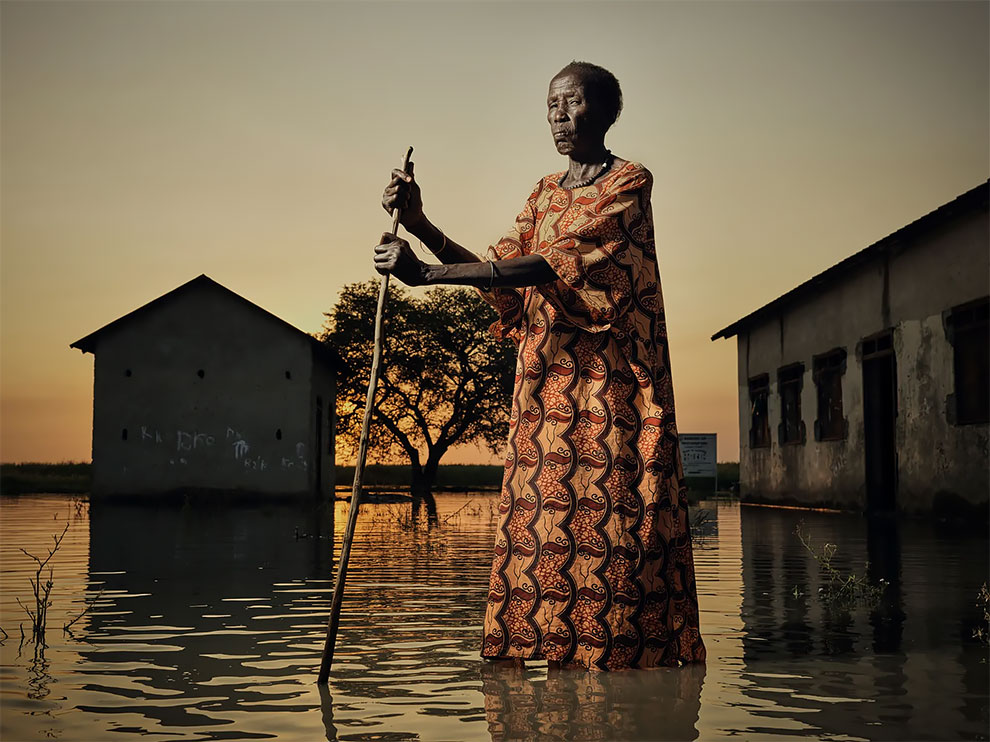 Floods in South Sudan have triggered food insecurity across the country. About 1.3 million children suffer from acute malnutrition, exacerbated by the spread of malaria and drinking water made unsafe by the floods, which have affected a million people since July 2020. Jonglei state is at the heart of the devastation. This project documents the devastation on three levels: natural disaster, food insecurity and loss of dignified living. (Photograph: Peter Caton/Budapest International Foto Awards) 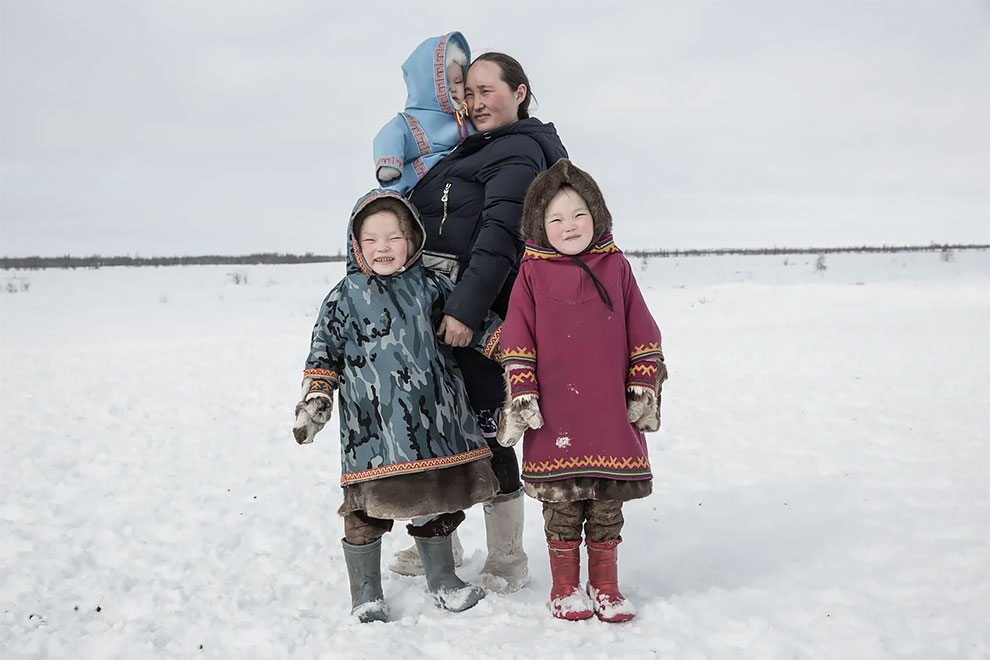 ‘In the far north of Russia, on the Taymyr peninsula, indigenous peoples continue to live according to the traditional way of life. They wander from place to place with their herds of deer. They spend all year in the tundra from birth to ripe old age, except for the time when children leave to study in boarding schools. It was surprising for me to learn that they are not hostages of the situation, they have a choice. Many families have apartments in settlements, but they do not want to live in them – choosing to roam the endless expanses.’ (Photograph: Yulia Nevskaya/Budapest International Foto Awards) 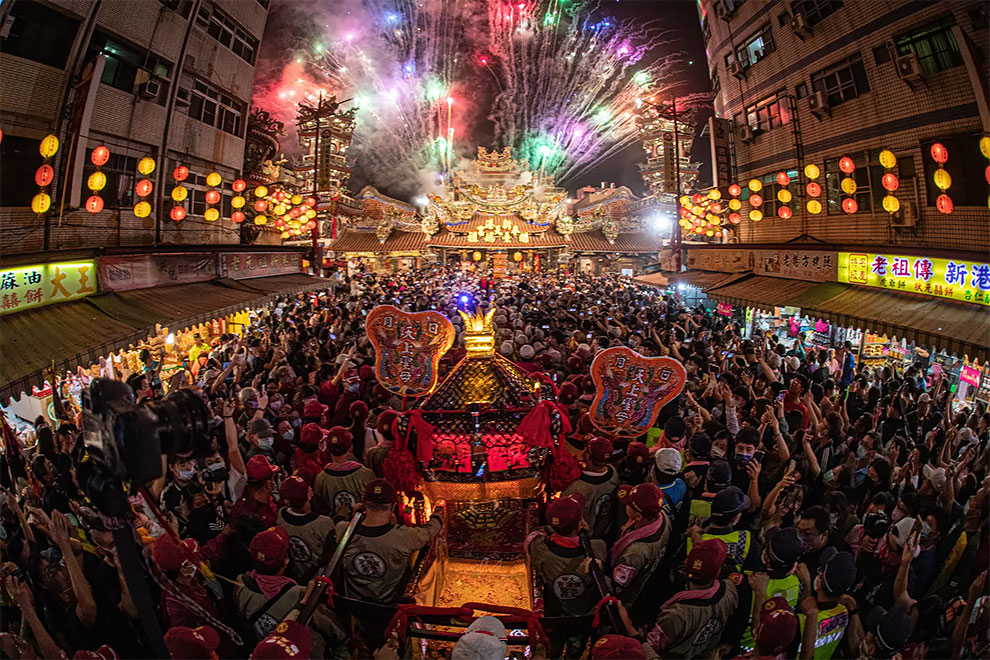 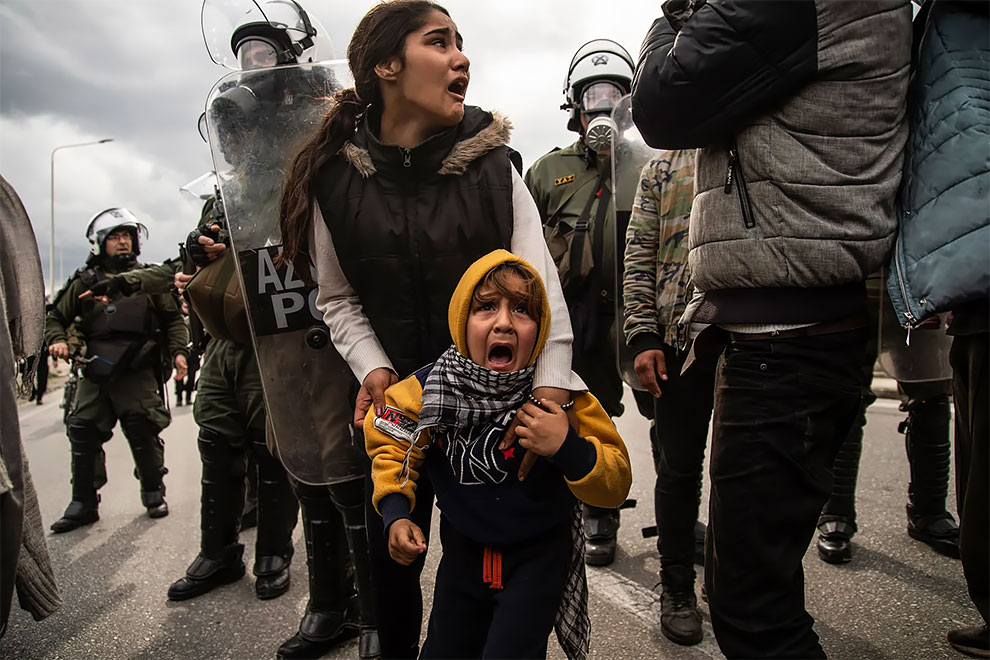 Two migrant girls mourn during clashes between refugees and riot police on the Greek Island of Lesbos on 3 February 2020 in Mytilene, Greece. Refugees protested against the conditions in which they lived inside the Moria refugee camp. Moria was the largest refugee camp in Europe, providing temporary shelter to about 20,000 asylum seekers, before a fire and its final abandonment in September 2020. (Photograph: Ivan Romano/Getty images/Budapest International Foto Awards) 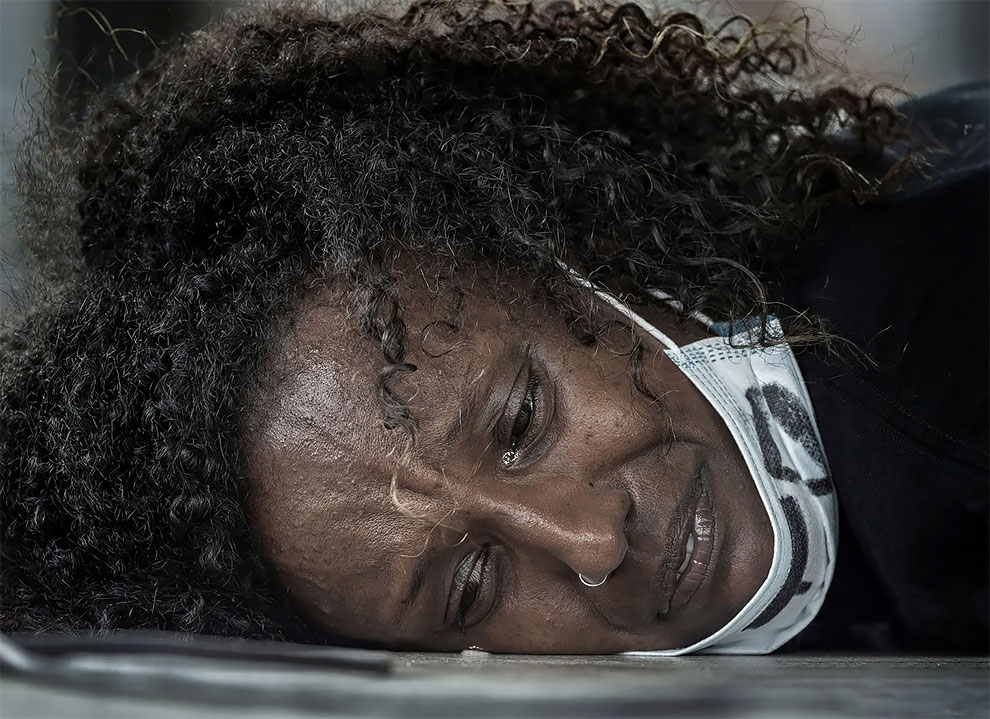 At a Black Lives Matter protest in Cairns, Australia, US citizen Hermela Bealfan cries as she lies on the ground for eight minutes and 46 seconds – the time it took police officer Derek Chauvin to kill George Floyd by kneeling on his neck in Minneapolis. Cairns residents came out in their hundreds not only to protest against Floyd’s murder but also the Australian indigenous death toll ‘in custody’ – at the time 432 since 1991. (Photograph: Brian Cassey/Budapest International Foto Awards) 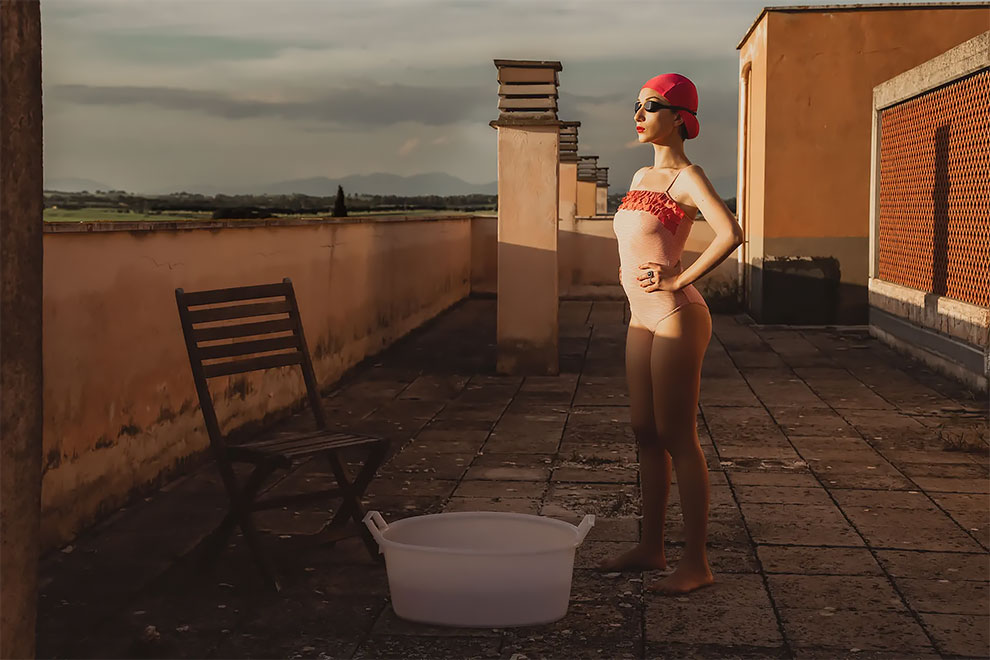 ‘I’m a freelance photographer based in Tuscany but working all round Italy. I have approached professional photography only in recent years and I travel all around Italy for my projects. Every shooting session is an opportunity to grow both as a photographer and as a person. I want to give my portraits a deep and knowable meaning, ‘asking’ my images to spread energy and emotions and sometimes denouncing what I see happening to our world.’ (Photograph: Sean Glacio/Budapest International Foto Awards) 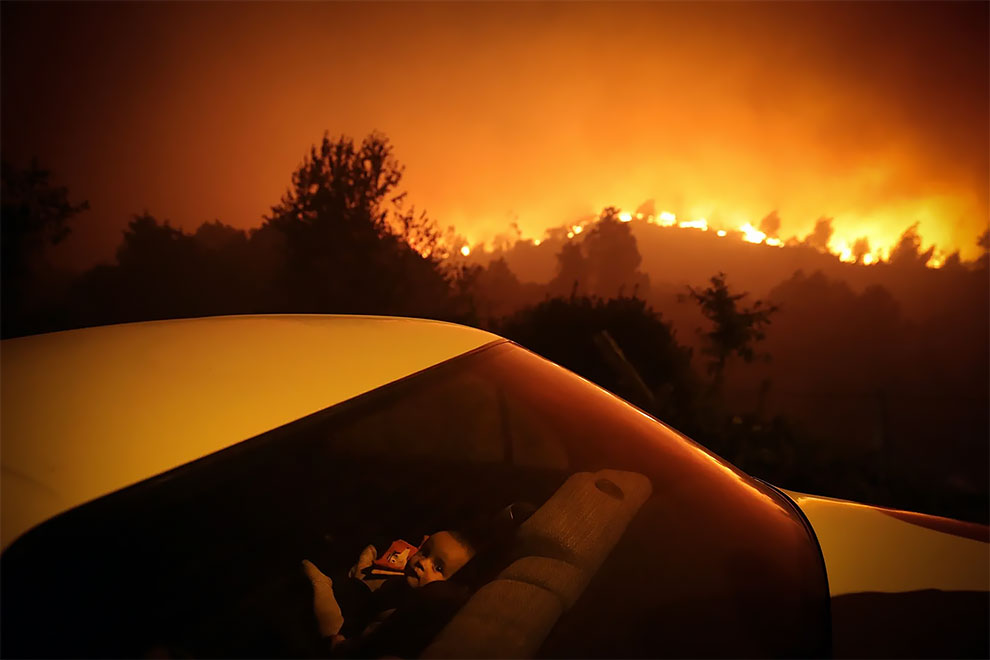 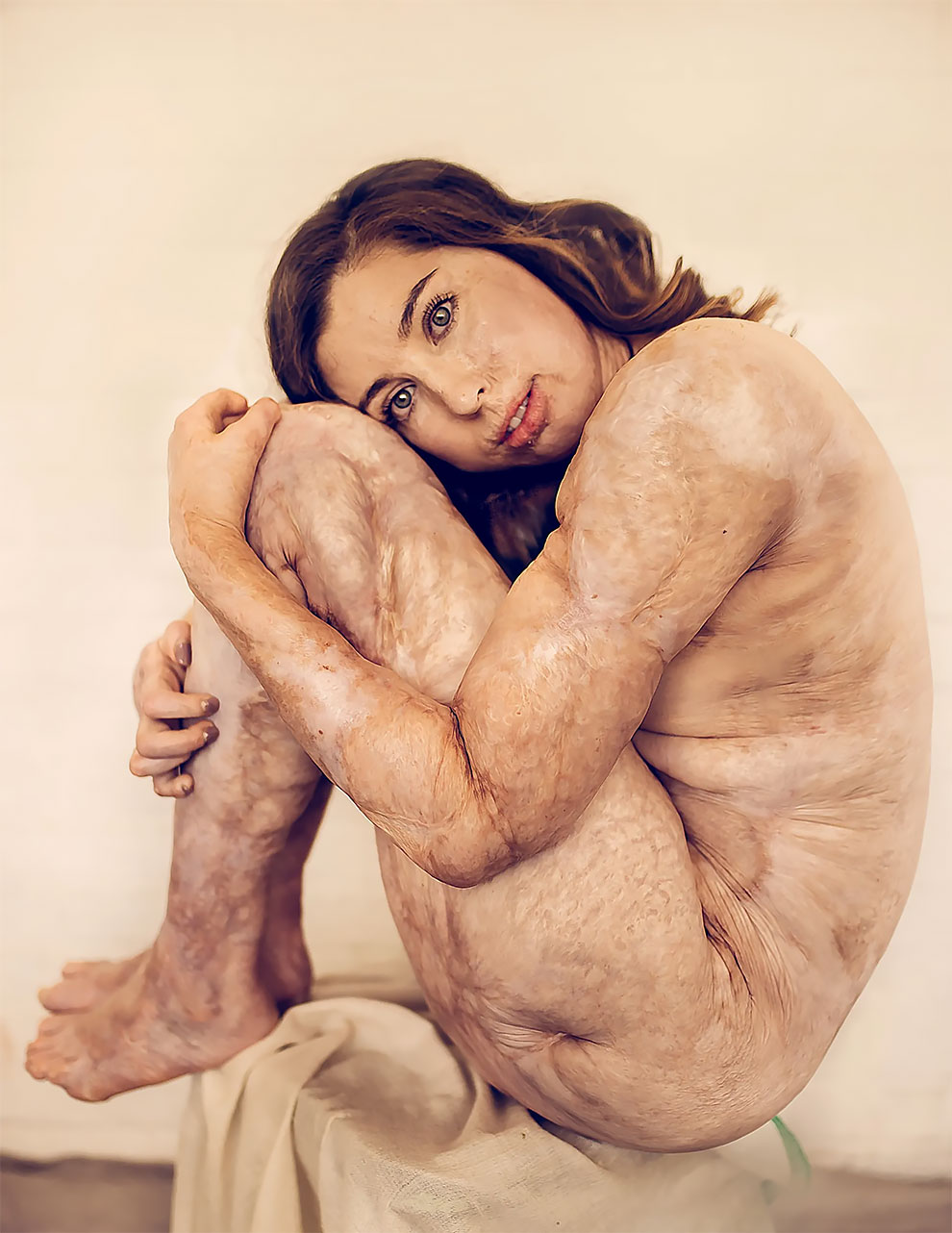 ‘I grew up being called a midget by friends and family, who believed it was endearing to call me so. But as a result, I have battled with the concept of beauty, self-love and appreciation of myself beyond my physical appearance for all of my life. When my eight-year-old daughter came back home to ask if she is beautiful, it hit me the most. Changing the Conversation is a personal series that speaks of beauty as not a bondage but a concept that frees you. Beauty is not this or that; pretty or ugly. Beauty exists beyond binaries.’ (Photograph: Sujata Setia/Budapest International Foto Awards) 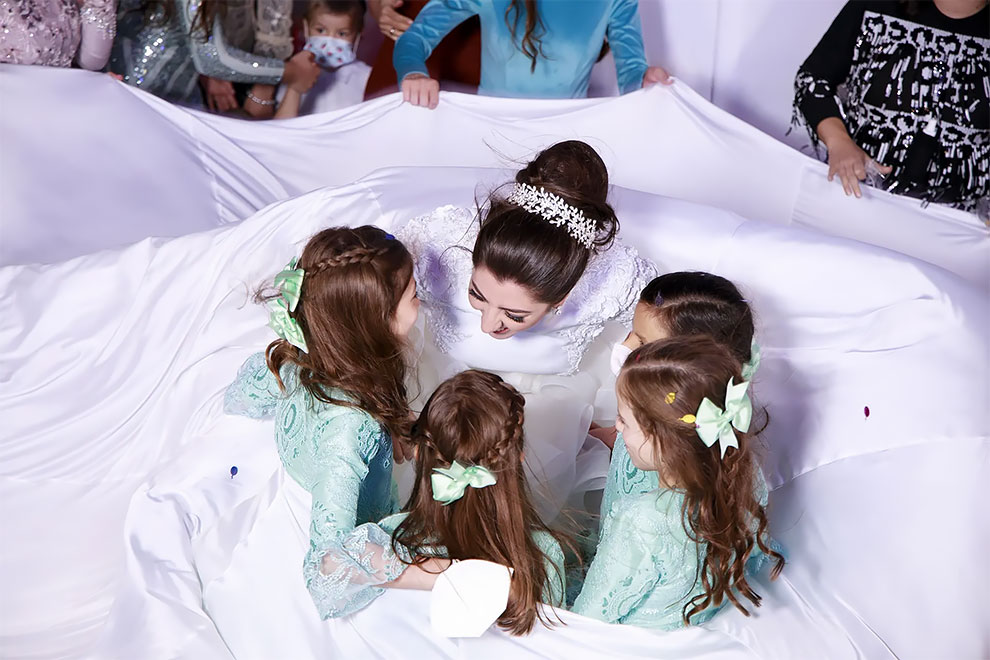 ‘What kind of dress is this? That’s what I asked myself when I was covering this Jewish wedding. They put a cape on the bride, it is like a dress with a hole in the middle where the guests go to dance with her, and so the mother, the mother-in-law, the courtship, her friends and so on entered. It was the first time I saw this and the truth was I was delighted with the result.’ (Photograph: Carolina Plaz/Budapest International Foto Awards) 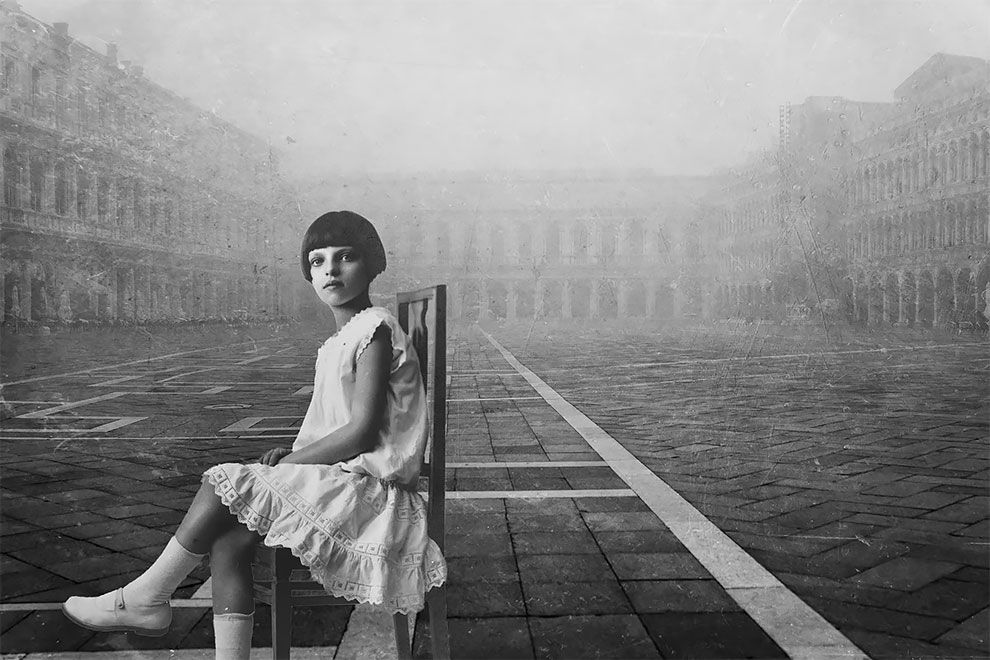 ‘Staying closed at home for months due to repeated lockdowns and being able to go out, as a photojournalist, to photograph my completely deserted city made me think a lot. The sense of loss, the absence of life, I perceived it similar to the sense of pain and absence of all my relatives and relatives who died in recent years. I tried to fill the deep sense of loneliness by making collages from photographs of Venice empty due to the Covid combined with old family photos.’ (Photograph: Barbara Zanon/Budapest International Foto Awards)

You Are My Mother – 1st Place – Portfolio – Professional 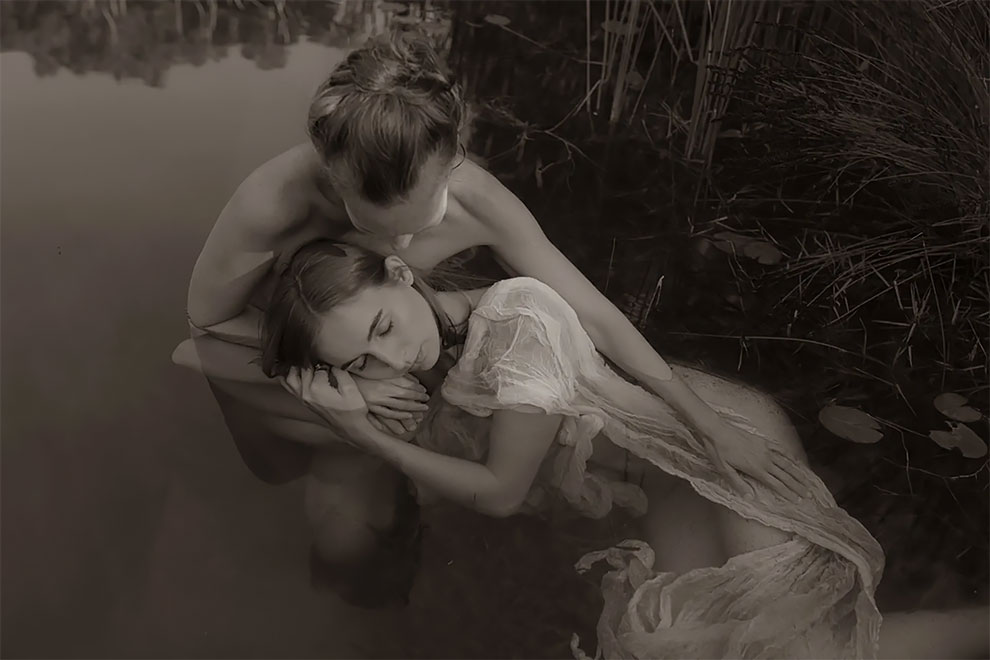 ‘As the Covid pandemic rolled over the world, many of us found ourself going back to basics and spending more times with our families. Angelika started photographing her project in April 2020, while in complete lockdown in South Africa, because she wanted to document beautiful emotional healing she witnessed between a mother and her adult daughter. She started exploring the same ‘story’ in other mother/child connections, examining the impact it had on her own family life and on her audience.’ (Photograph: Angelika Kollin/Budapest International Foto Awards)

Photographer of the Year – Book – Professional 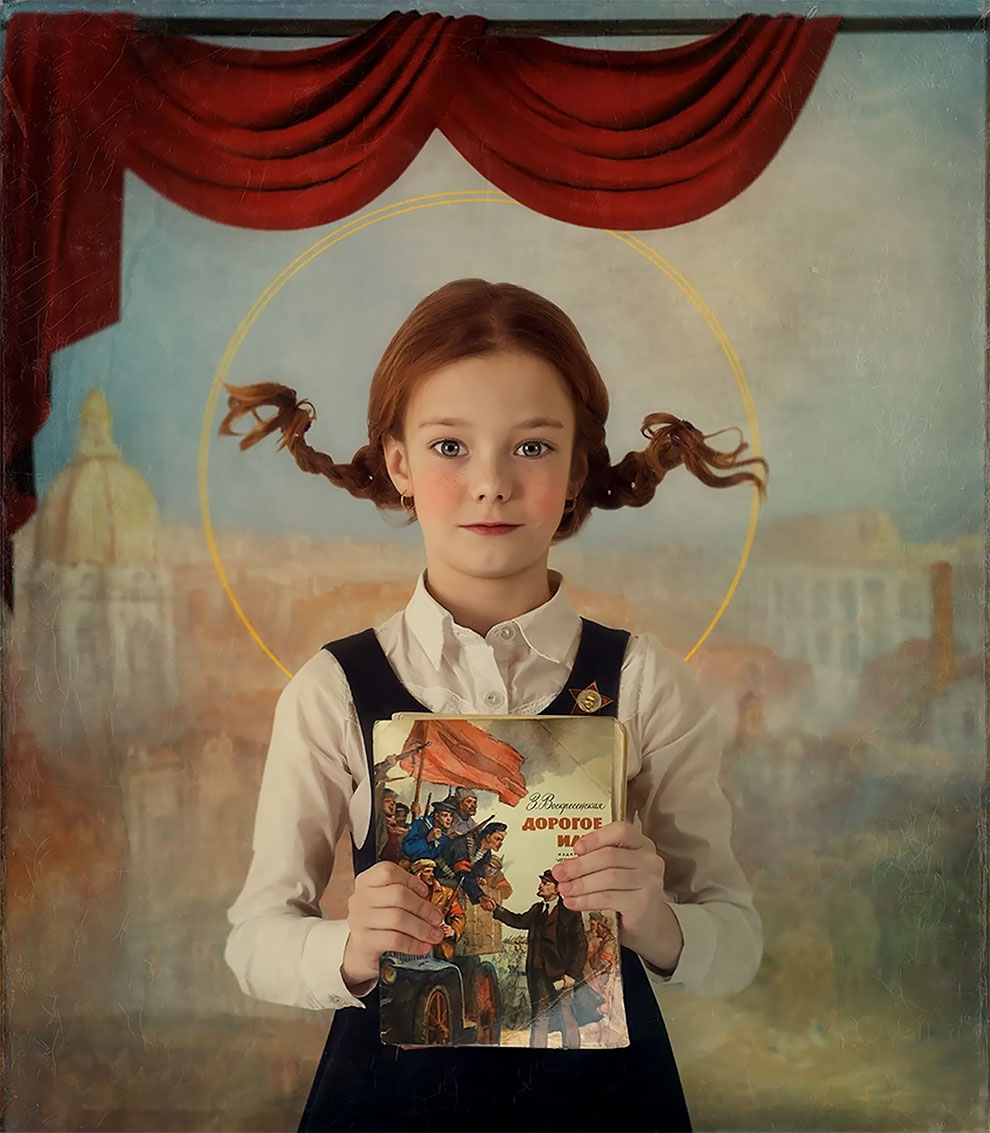 ‘The history of the Soviet Union is a clear example of how propaganda shapes the worldview, values and way of life of a person. We, who were born in the Soviet Union, sincerely believed in the values that we were inspired in early childhood. And only during perestroika [the reformation movement] we discovered the Other World.’ (Photograph: Svetlana Melik-Nubarova/Budapest International Foto Awards) 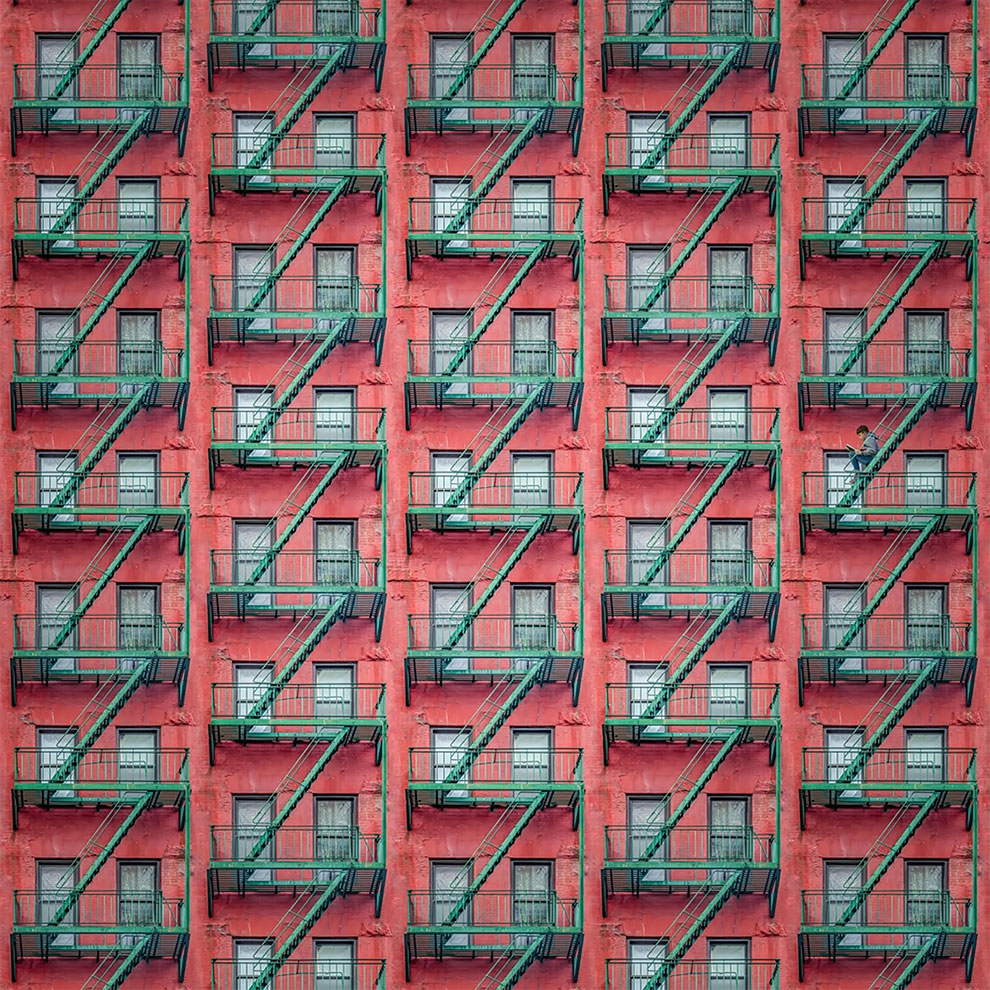 ‘My ongoing series of New York fire escapes is an uplifting tribute to the rhythm of this fascinating city. To me the fire escapes and the facades behind them are very characteristic for New York. On one side they are abstract compositions, but at the same time the stairs and windows behind provide a tangible reference to the human scale.’ (Photograph: Paul Brouns.jpeg/Budapest International Foto Awards) 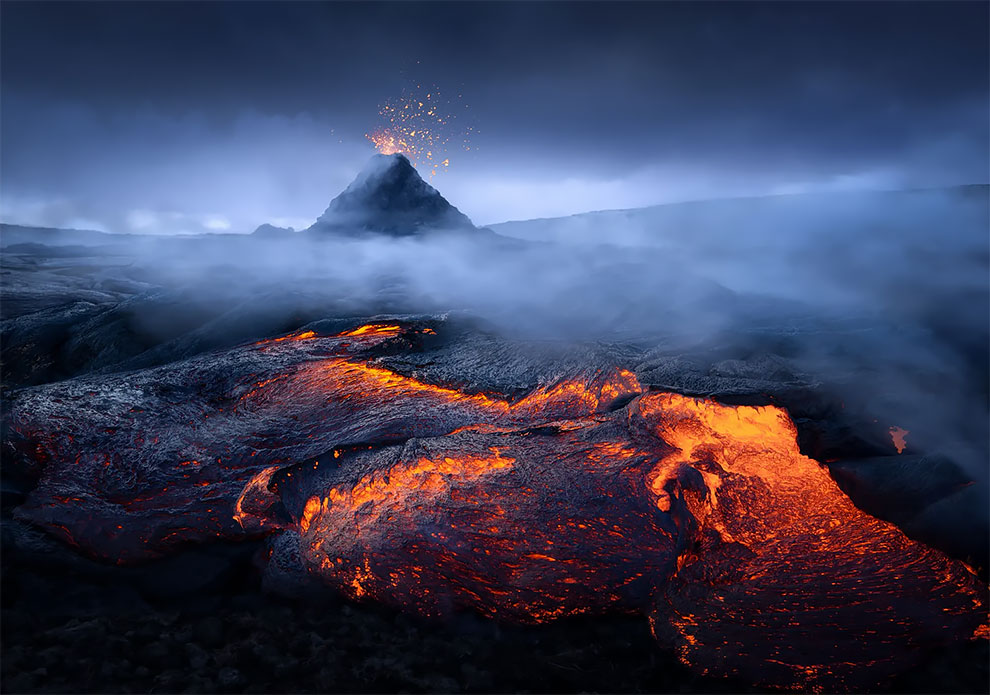 ‘During my expedition to the volcanic area of Fagradalsfjall in southwestern Iceland, it was the first photo just after the first contact with lava and the ubiquitous poisonous gas. Volcanoes are a rare opportunity to observe the complete transformation of the landscape. Places that were only recently valleys and meadows became hills, craters and lava fields. Being there was a great experience.’ (Photograph: Filip Hrebenda/Budapest International Foto Awards) 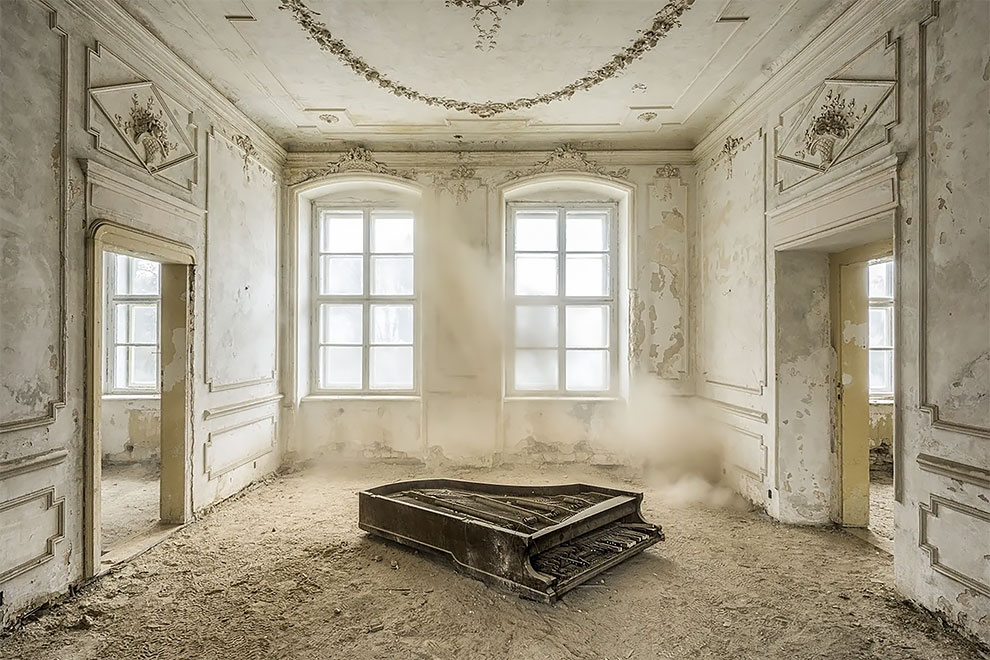 ‘What remains of their finery? Blown away marble, disembowelled fireplaces, torn hangings. These great houses have lost their glory. However, lurking in the shadows, astonishing wood and cast iron monsters with lacquered skin display their toothless smiles with ivory reflections. These pianos are the soul of the place, too heavy to be moved.’ (Photograph: Romain Thiery/Budapest International Foto Awards) 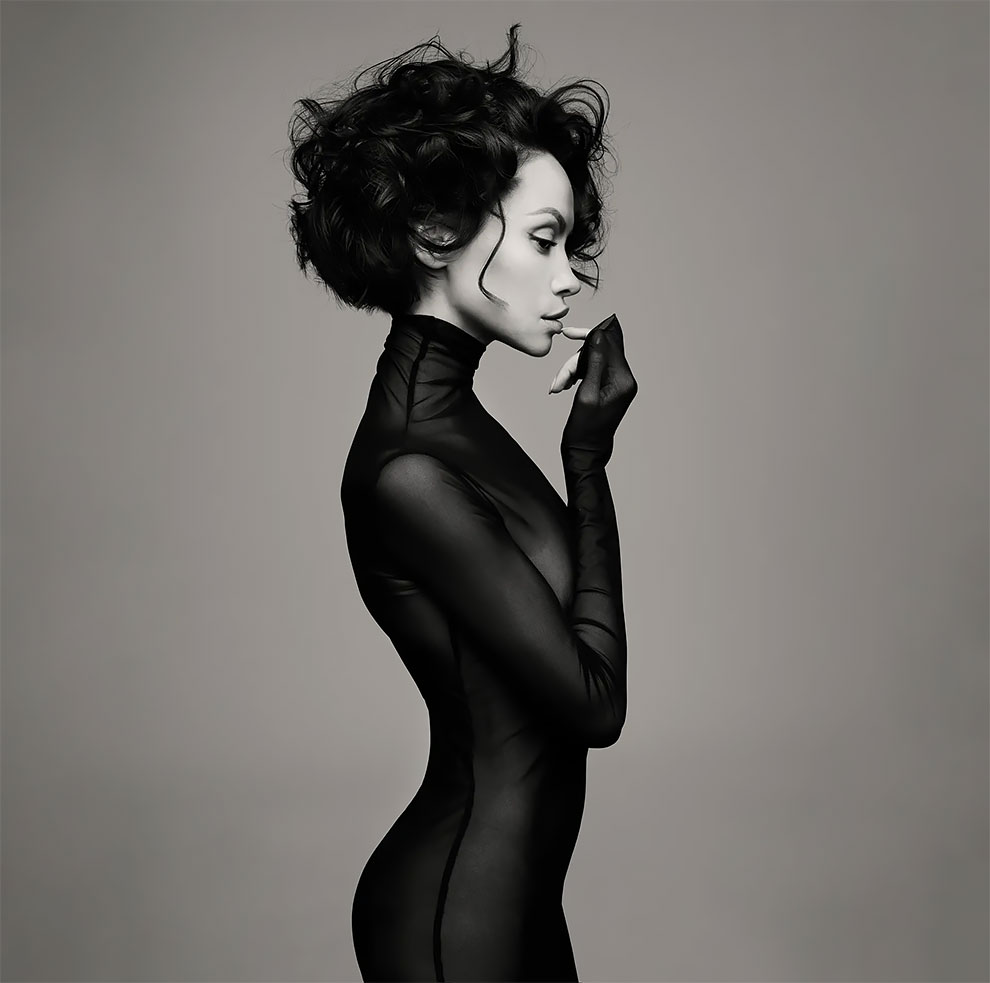 ‘The conception for the photo project was the creation of a perfect female image, romantic and mysterious, and at the same time daring and exciting.’ (Photograph: George Mayer/Budapest International Foto Awards) 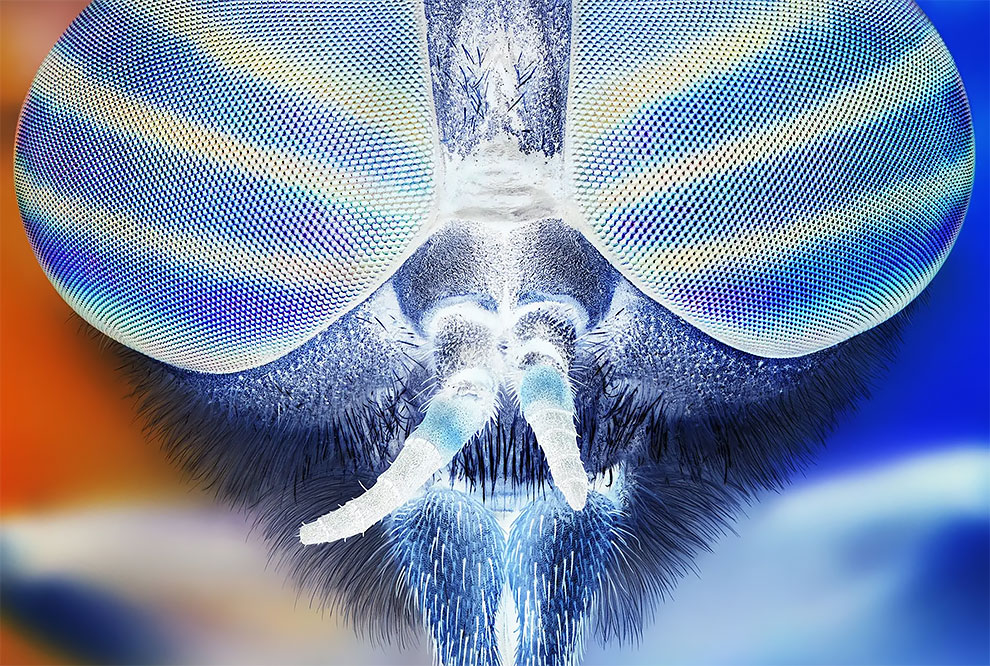 ‘People are often afraid of insects. The insects are akin to creatures from other parallel dimensions or sci-fi movies. The insects’ physiology, superpowers, and the way of life are different from that of humans. I tried to show the true essence of beings from other dimensions using negative images of the original photos.’ (Photograph: Irina Petrova/Budapest International Foto Awards) 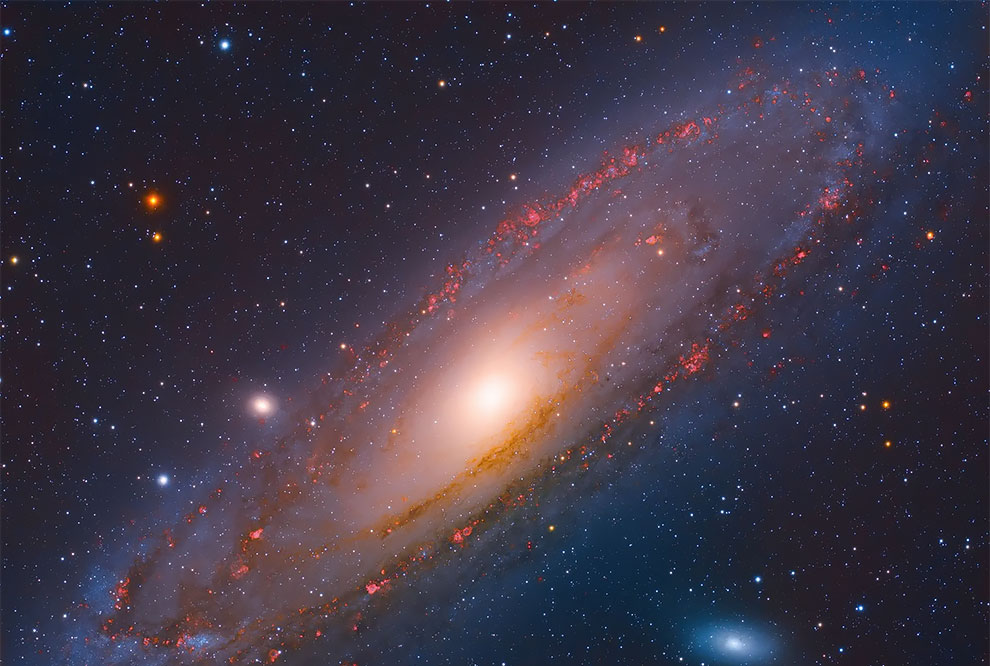 ‘I have spent a year capturing all these mysterious and beautiful images of the universe, including galaxies and nebulas. Every image was shot for at least 25 hours, which means multiple nights per final image. Most of the images were taken at a dark site located in west Texas. Every night I watched the stars while my equipment is working, it makes me think of how tiny we are as human beings, and how little colour and luminosity we can perceive with our eyes’ (Photograph: Zixiong Jin/Budapest International Foto Awards) 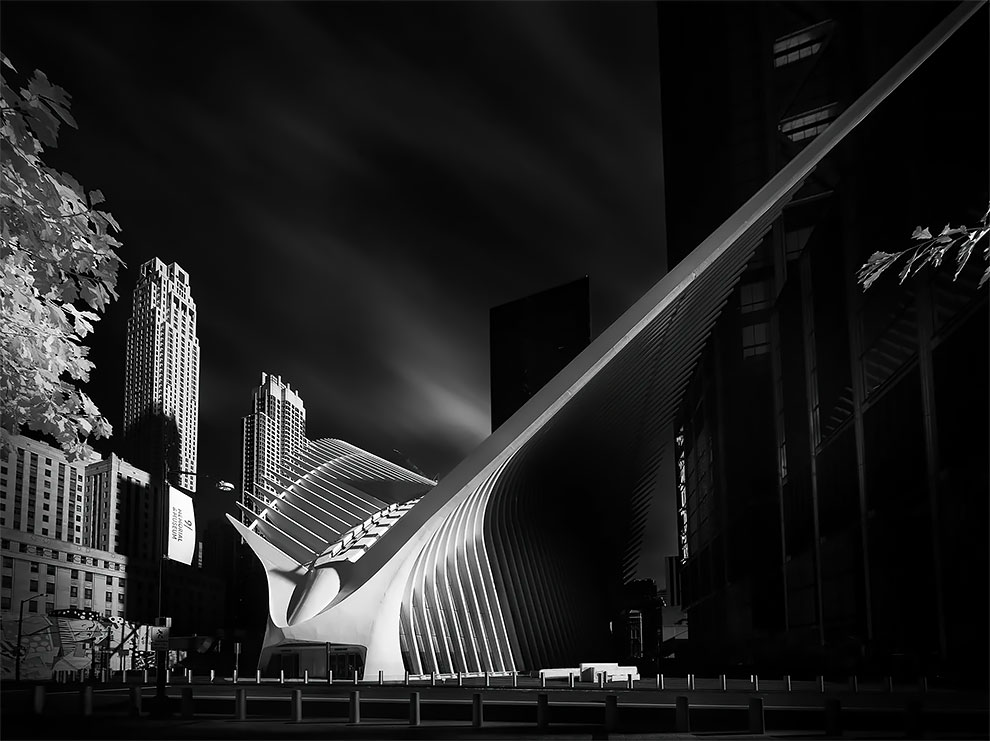 ‘The most iconic buildings and landmarks of major cities around the world shot using DIY modified cameras for infrared photography. Infrared light renders a surreal atmosphere where the notion of colour has no meaning and luminosity is far different from what we normally perceive with our naked eye. This atmosphere is further enhanced by the total lack of human presence.’ (Photograph: Raffaele Canepa/Budapest International Foto Awards) 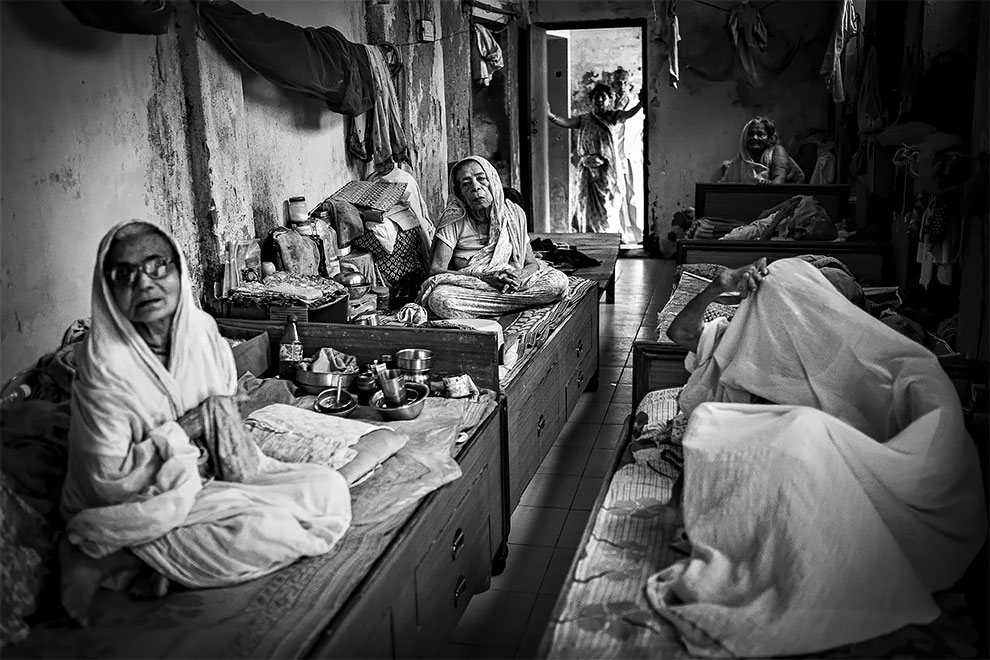 ‘Modern Indian society seems to be not able to modify some aspects belonging to the most orthodox Hindu culture, according to which a widow no longer has any right or social utility, and loses her identity when the husband dies. Kicked out of houses, they are banned from all social moments of life. A phenomenon that crosses all social classes, doubly enclosed within the walls of the ashrams and the cultural prisons of a society that prefers to make them invisible rather than questioning themselves.’ (Photograph: Valter Darbe/Budapest International Foto Awards) 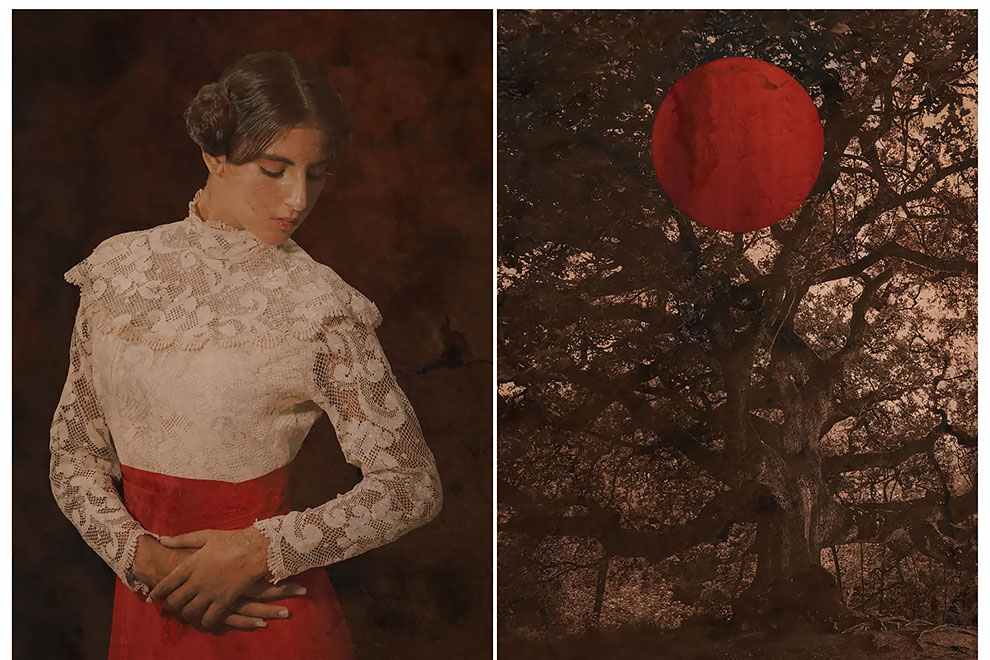 ‘Teresa Bandettini was one of the most talented eclectic woman of the 19th century, born in Lucca in 1763. She is well known as the intellectual dancer due to her captivating and touching performances. She became the first woman to be admitted to the Arcadia Academy with the name of Amarilli Etrusca. I portrayed her through a series of diptychs inspired by Teresa’s feminine character and the deep knowledge she could source to create her art.’ (Photograph: Nicoletta Cerasomma/Budapest International Foto Awards) 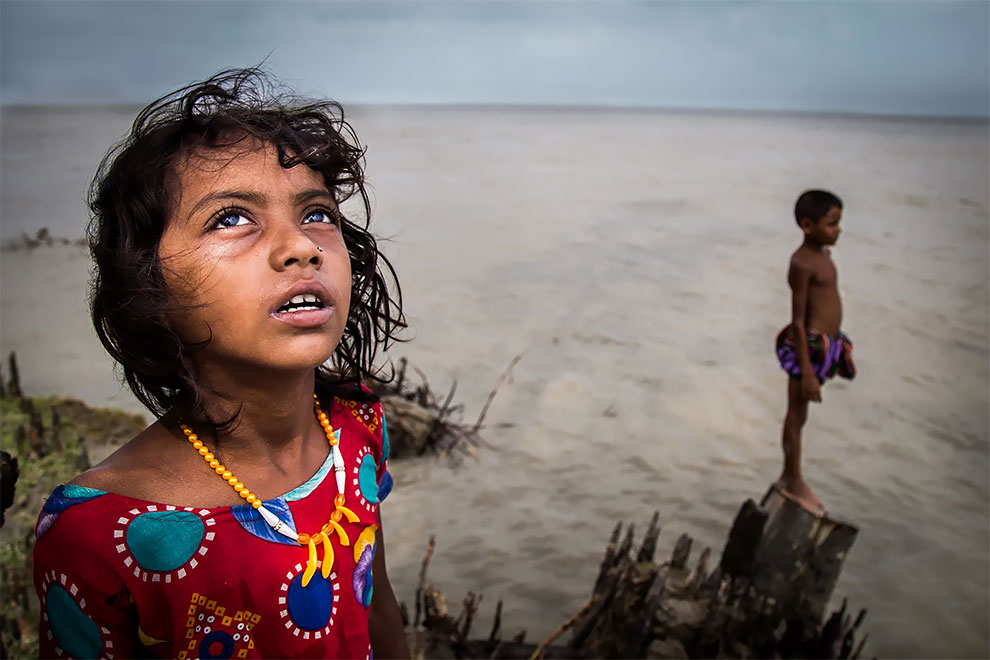 ‘Bangladesh is one of the countries most likely to suffer adverse impacts from anthropogenic climate change. Threats include sea level rise, floods, and cyclones (approximately 130,000 people were killed in the cyclone of April 1990). The impacts of climate change will only exacerbate the problems already facing the population. Climate change and exposure to natural disasters threaten to derail efforts to eradicate poverty.’ (Photograph: Moniruzzaman Sazal/Budapest International Foto Awards) 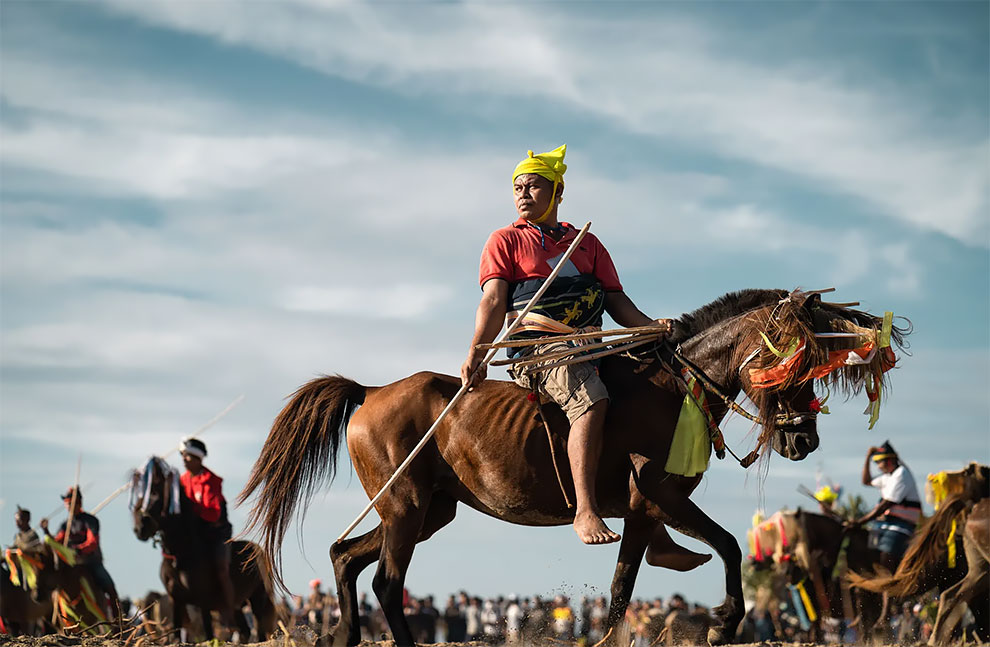 ‘Heralded by the arrival of the nyale, mythically revered sea worms, the Sumbanese celebrate a spectacular spear fight on horseback at the end of each rainy season. Pasola, a war ritual played to celebrate the rice planting season. Captured in 2020, Sumba Barat, Indonesia.’ (Photograph: Weinhardt Wolfgang Pasola/Budapest International Foto Awards) 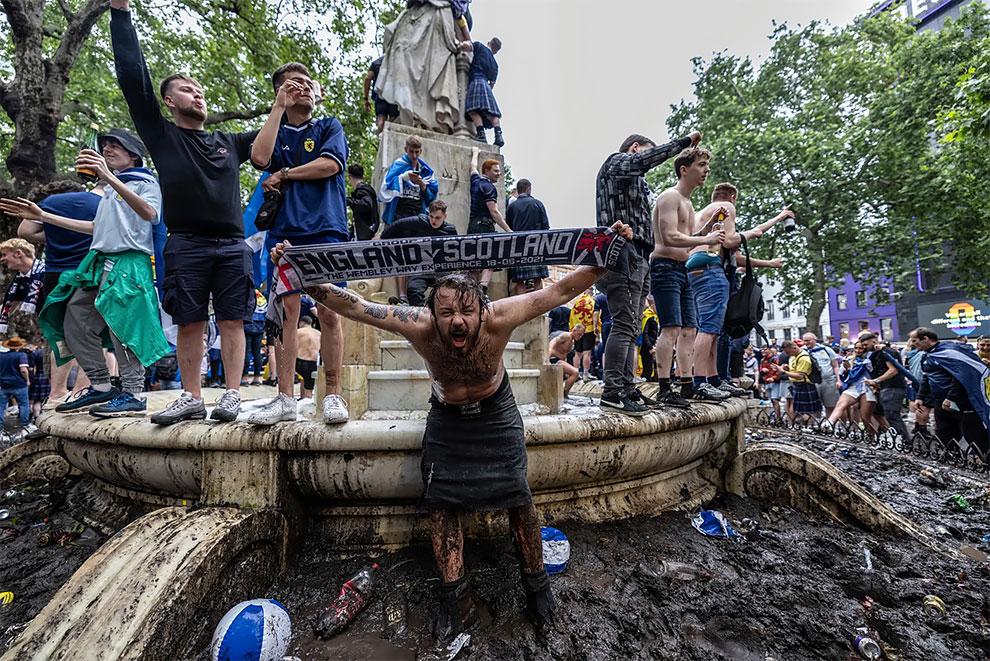 ‘Drunken Scottish football fans in the west end of London to celebrate Euro 2020. Thousands of Scottish fans headed to Leicester Square, where they wore their country’s shirts, kilts, waved flags and set off smoke bombs ahead of watching the match against England which ended in a 0-0 draw, enough to keep Scotland in the tournament. Supporters had been urged not to travel to London unless they had a ticket or had organised somewhere to watch the game.’ (Photograph: Jeff Gilbert/Budapest International Foto Awards)

Photographer Captures The Lives Of People Living In Yakutia, One Of The Coldest Regions In Russia
Cool Pics Show Fashion Styles of ’80s Couples
Photographer Andrius Burba Captures Stunning Photos Of Dogs From Underneath
Playful Pictures of Marilyn Monroe Having Breakfast in Bed, 1953
Two Spain-Based Photographers Playfully Interact With Geometry Of Architecture In These Images
Romanian Urban Explorer Captured An Abandoned Crematorium And Found Human Remains
'The Winners' by Rafal Milach
Walmart Keeps Posting Pictures of This Employee Posing With Stuff, She Goes Viral
Flight Of Fantasy: Incredible Art Photography By Ravshaniya Azulye
The Selected Impressive Finalists' Images of The 2021 Bowness Photography Prize
Cool Pics That Show How People Enjoyed Parties In The 1970s
Burning Man 2019 Mega-Post: Fantastic Photos From The World’s Biggest And Craziest Festival
Spectacular Winning Photos Of The 2018 UK Underwater Photographer Of The Year Contest
Vibrant Fashion Photography In Gloomy Neon By Jake Hicks
Japanese Photographer Perfectly Captures His Grandmother’s Playful Nature In Touching Portraits
Rollers of Venice
Bewitching Photos Of Late-Night Tokyo That Look Like A Movie
September 7: This Day In Photos From The Past
KangHee Kim’s Images Are As Satisfying To Create As They Are To Look At
101 Best Picture Comparisons From Lilliput Or Chamberlain And The Beautiful Llama
This Guy Shot 50,000 Pics To Make An 81MP Photo Of The Moon
Japanese Instagrammer Performs Bicycle Tricks On One Wheel
42 Wonderful Behind The Scene Photos From Classic Movies
Photographer Explores the Beautiful Diversity of Redheads
awards, budapest, contest