Family of the Photographer 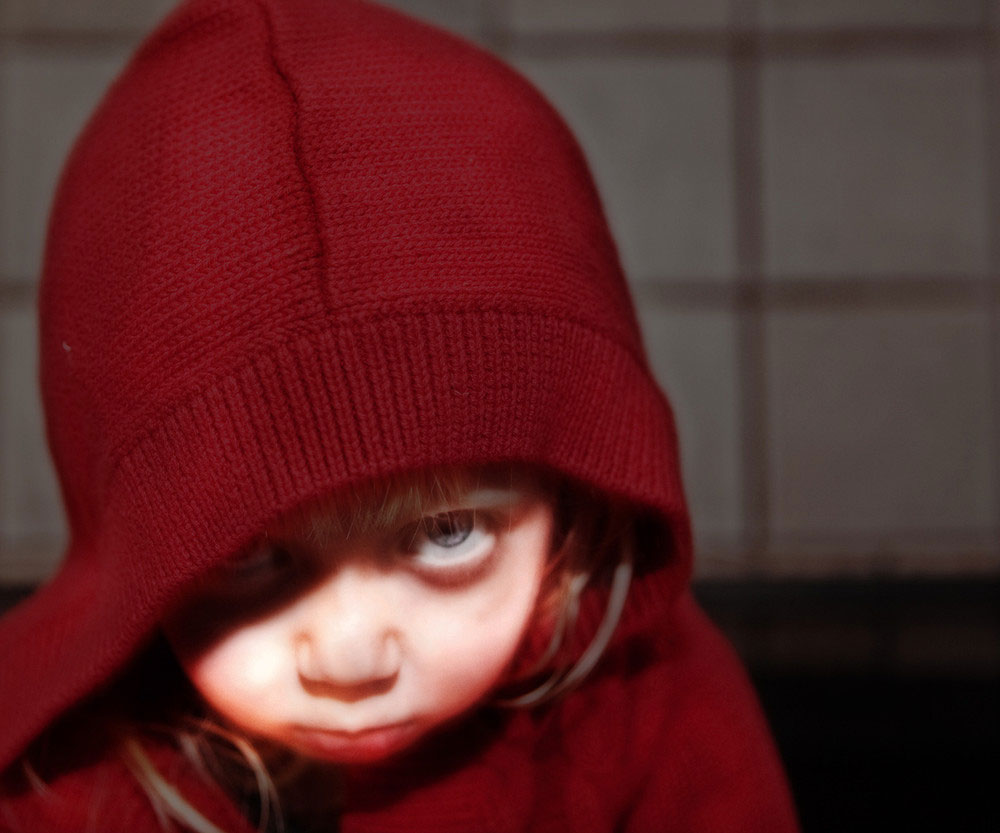 Little Red Riding Hood. “The moment I pulled this sweater out of the drawer for Frankie I knew what I wanted for my picture today. I envisioned the look, the style, and the composition. When working with a 2 year old it is never easy to actually get the shot you want, especially when they decide to skip nap time. But I really like how this one turned out” – Rich. 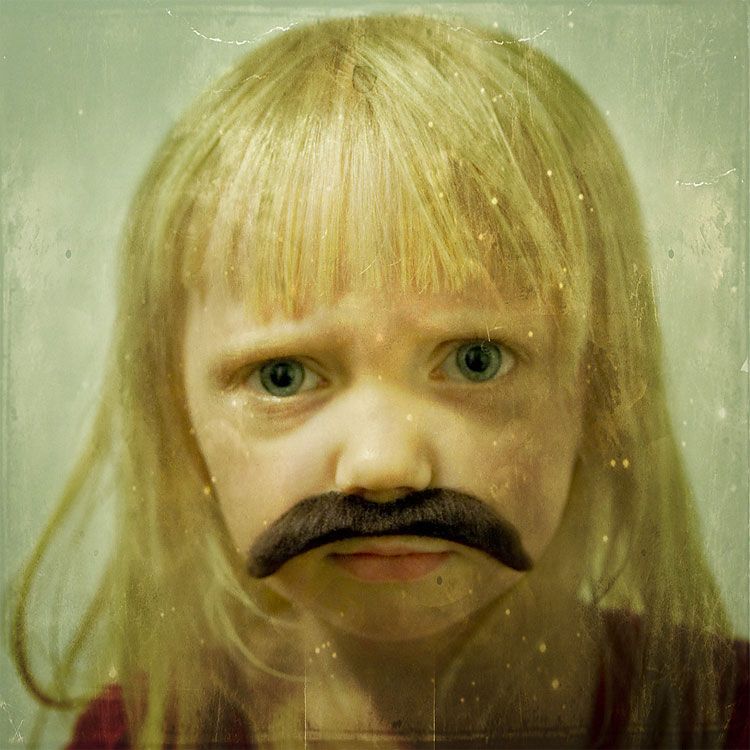 Frankie “The Kid”. “ This is the last known picture of Frankie “The Kid”, ring leader of the Tres Amigos gang. “The Kid” is a fugitive WANTED in 57 counties for tomfoolery, mischief making, dog wrangling, avoiding chores, laughing loudly, eating junkfood, tv watching, staying up past her bedtime, public display of cuteness, and last but not least… wearing a fake mustache” 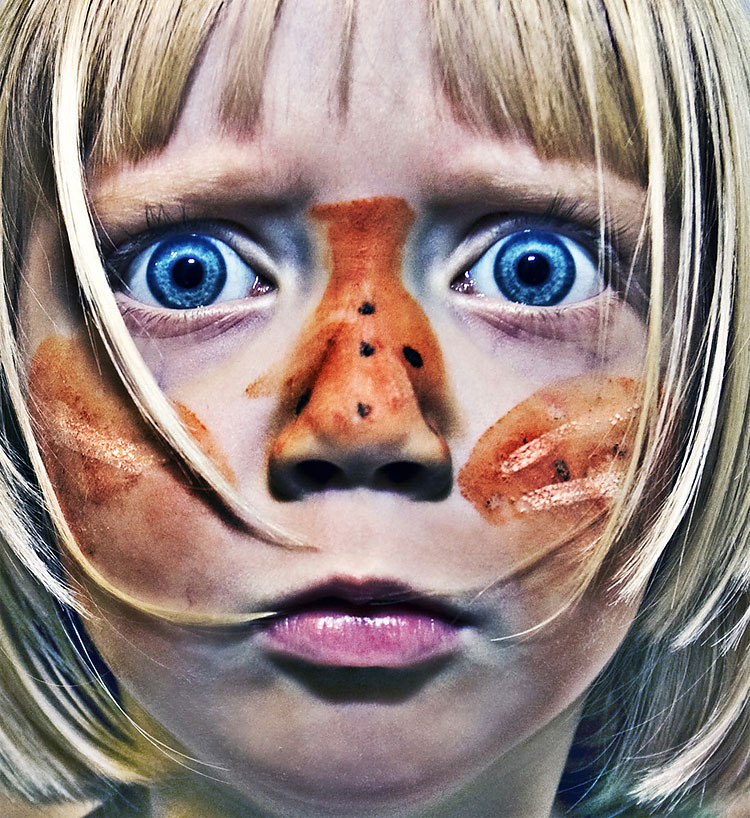 Call of the Wild. “Yay for face painting at daycare. Happy Belated Chinese New Year. Year of the Tiger” 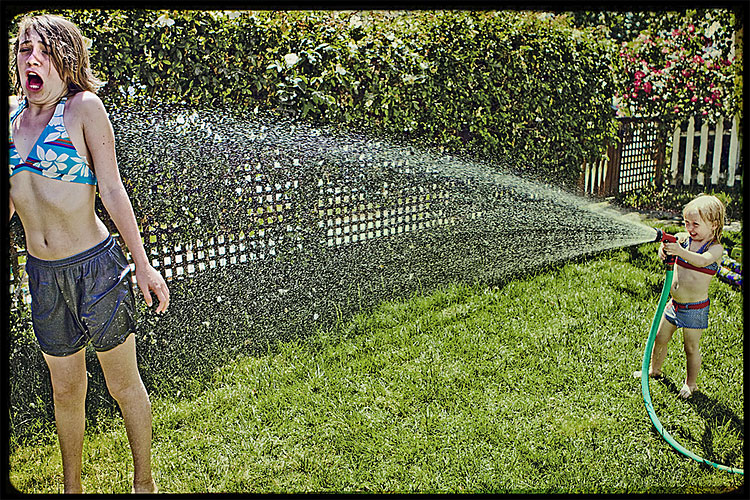 Summertime Hosedown. “Dang, it’s like 90 degrees in Alameda today. Bought a kiddie pool and the girls had a water fight. This shot shows the 3 foot underdog won that fight” 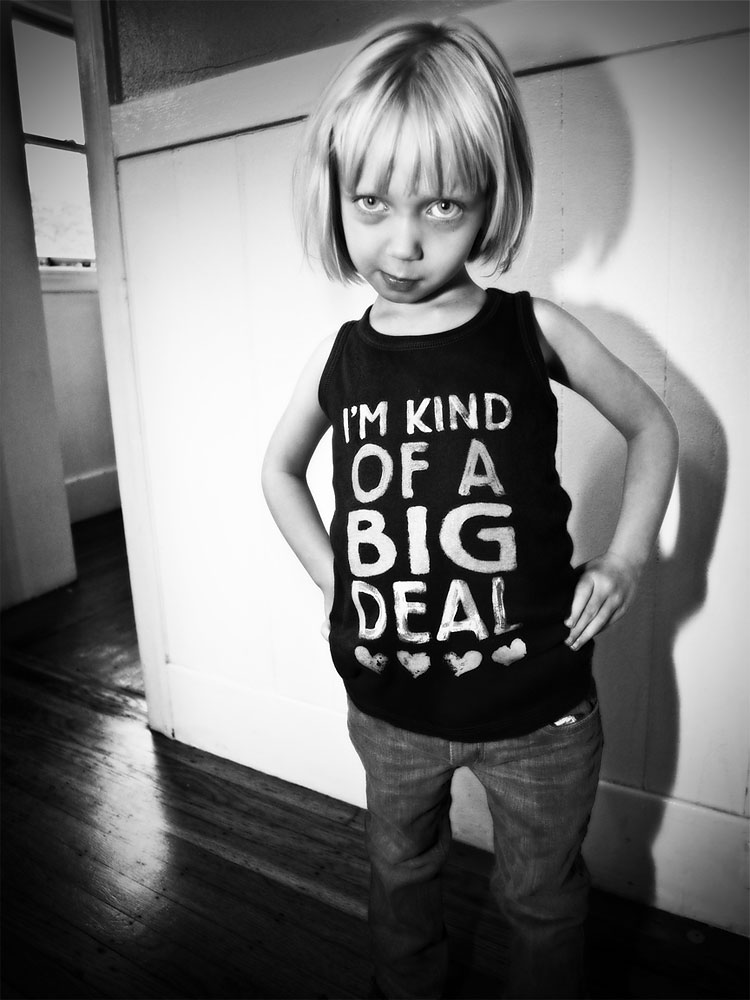 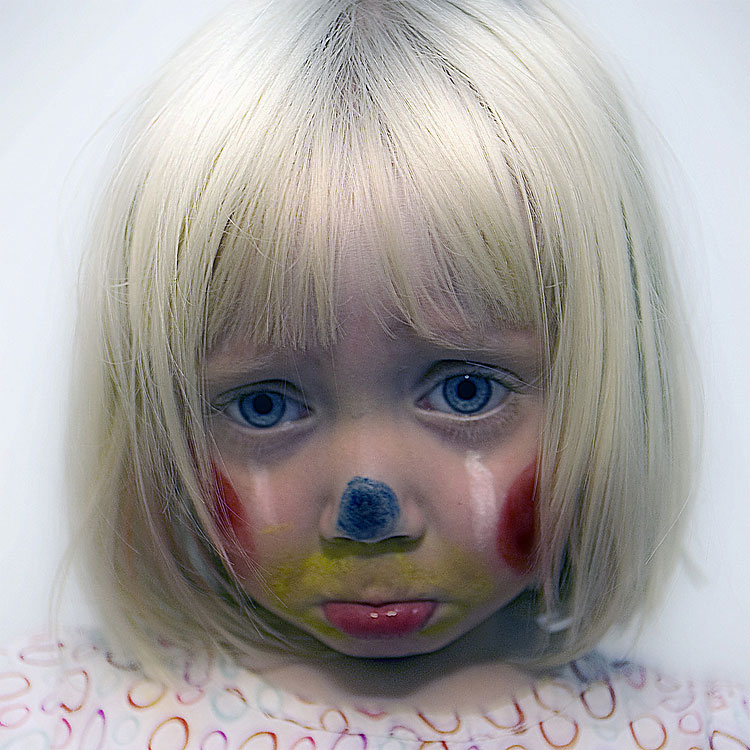 Sad Clown. “God I love face painting day at daycare. Today Frankie came home as a clown. Which should be a happy thing but I always think of clowns as sad so I immediately said “time to take pictures” and “make your sad face”. She takes direction so well for an almost three year old. Later, we were in the back yard with the dogs and Colonel Mustard had an apple and jumped on the lawn chair to eat it. Frankie turns to me and says “We need a picture of this”. That’s my girl!” 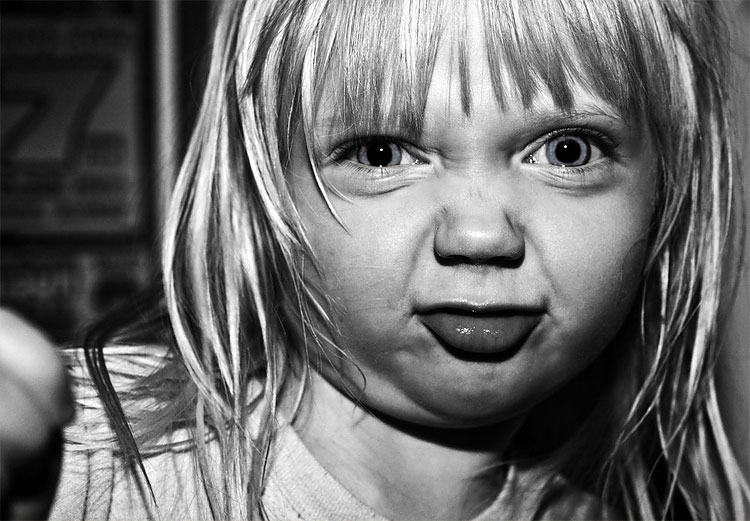 Momma Said Knock You Out. “TOTW – One line lyrics. Wish I had a little more of the fist that ended up hitting my camera. Frankie can be a badass mofo sometimes” 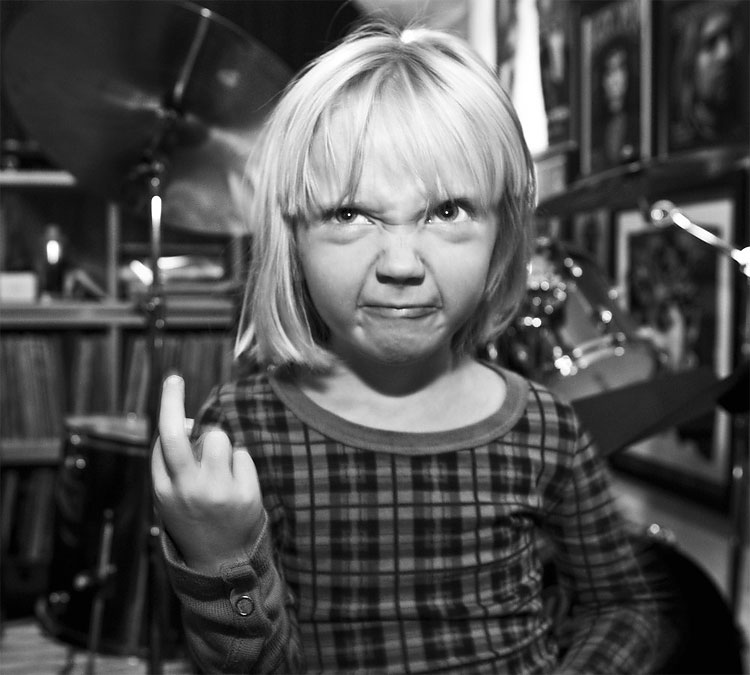 FU. “Don’t bother. I already called CPS on myself” 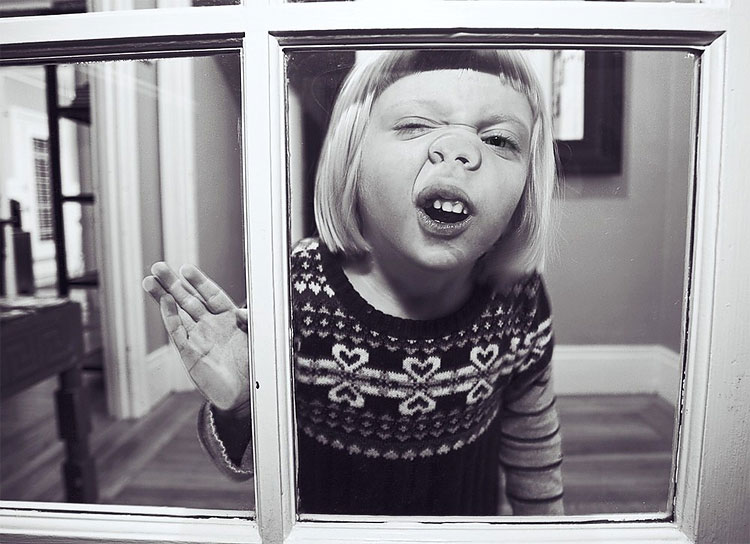 Little piggy. “Oink! Ahh… it’s Saturday night, you are 40, your wife is watching some 48 hour mystery on the TV, and you have kids. What to do? Take future blackmail pics of your 3 year old for when she gets her first boyfriend (in like 20 years or so hopefully)” 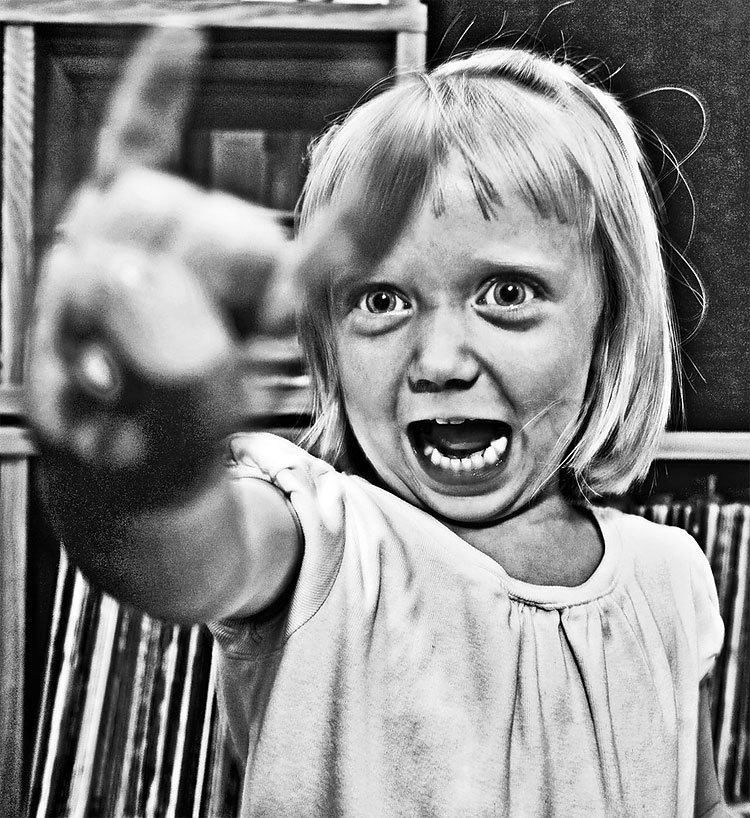 Raise the Horns. “Frankie rocking the horns and a new cute as hell haircut”

Romantic Photos of the ’60s Couples
2014 National Geographic Photo Contest, Week 3
Fascinating Vintage Photos of a Batman-Themed Dance Class in New York in the 1960s
Winners Of The National Geographic's Kids Photography Competition 2015
Flying Over the Frozen Waters
The Astronomy Photographer of the Year 2014 Contest
Kissing On A Rainy Beach: Bruce Davidson’s Photographs Of 1960s Britain
A Teenager’s Photos of 1970s Brooklyn NYC: Led Zeppelin, The El, snow and All the President's Men
The Velvet Kingdom: Diverse Regions of Southern Europe in Cinematic and Melancholy Photoworks by Henri Prestes
Stunning Color Photography in the 1950s by Saul Leiter
Belarus Fashion Week: Model Casting and Lingerie Show
Beautiful Color Photographs Of England During The 1920s
"All Dressed up With Nowhere to Play": Photographer Richard Davenport Captures Edinburgh's Stranded Fringe Stars
Through Photographer Jesse Rieser’s Lens, The Architectural Fallout Of The E-Commerce Revolution Is Beautiful
Beautiful Black And White Photos Of Kim Basinger In 1977
What If Abstract Models Were Real People? Photographer Imagines What The Subjects In Famous Paintings Would Look Like!
Mexico Day Of The Dead Parade 2019
Magical Cityscapes And Travel Landscapes By Dotz Soh
This Couple Of Artists Photographs Yoga Poses
Urban Photographer Roman Robroek Spent 5 Years Scouring The Continent For The Grandest Examples Of Forgotten Architectural Beauty
Derek Zoolander By Annie Leibovitz
2014 Sony World Photography Awards
Neringa Rekasiute's "We. Women" Photo Project Places Women In the Throes Of A Major Fear — And Is An Ode To Raw Self-Love
These Winning Photos Of The 2018 Underwater Photographer Of The Year Contest Will Take Your Breath Away
family, photographer

20 Award-Winning Photos Capture the Terror and Beauty of Giving Birth During the Pandemic
The Alley Cats: Photographer Nayan Khanolkar Captures Leopards In The Middle Of Mumbai
"Colorize To Remember": Samir Belhamra Colorized Historic Images To Bring The Past To Life
Lay's Summer Days Promotion Puts Your Fav Summer Photo An A Bag Of Chips
Breathtaking Aerial Ocean Photographs By Seth Willingham
Impressive Portraits of Grace Jones in the 1970s and 1980s
Eerie Pictures Of An Empty NYC
Spectacular Winning Images of The Female in Focus Photography Award 2022
September 17: This Day in Photos from the Past
Beautiful Pics Of Marilyn Monroe Taken By Sam Shaw On The Beach In 1957
2007 ‒ 2023 by Design You Trust. Proudly hosted by WebHostingBuzz.
Privacy Policy · Terms of Service · Content Removal Policy ❤️ 🇺🇦