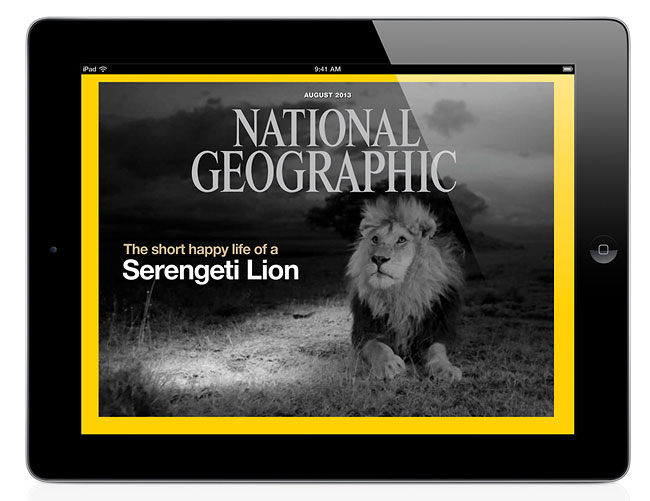 Images are from ‘The Serengeti Lion’ on National Geographic’s website.

“Tigers are solitary. Cougars are solitary. No leopard wants to associate with a bunch of other leopards. The lion is the only feline that’s truly social, living in prides and coalitions, the size and dynamics of which are determined by an intricate balance of evolutionary costs and benefits.

Why has social behavior, lacking in other cats, become so important in this one? Is it a necessary adaptation for hunting large prey such as wildebeest? Does it facilitate the defense of young cubs? Has it arisen from the imperatives of competing for territory? As details of leonine sociality have emerged, mostly over the past 40 years, many of the key revelations have come from a continuous study of lions within a single ecosystem: the Serengeti.

Serengeti National Park encompasses 5,700 square miles of grassy plains and woodlands near the northern border of Tanzania. The park had its origin as a smaller game reserve under the British colonial government in the 1920s and was established formally in 1951. The greater ecosystem, within which vast herds of wildebeest, zebra, and gazelle migrate seasonally, following the rains to fresh grass, includes several game reserves (designated for hunting) along the park’s western edge, other lands under mixed management regimes (including the Ngorongoro Conservation Area) along the east, and a transboundary extension (the Masai Mara National Reserve) in Kenya. In addition to the migratory herds, there are populations of hartebeests, topi, reedbuck, waterbuck, eland, impalas, buffalo, warthogs, and other herbivores living less peripatetic lives. Nowhere else in Africa supports quite such a concentrated abundance of hoofed meat, amid such open landscape, and therefore the Serengeti is a glorious place for lions and an ideal site for lion researchers.” Full article. 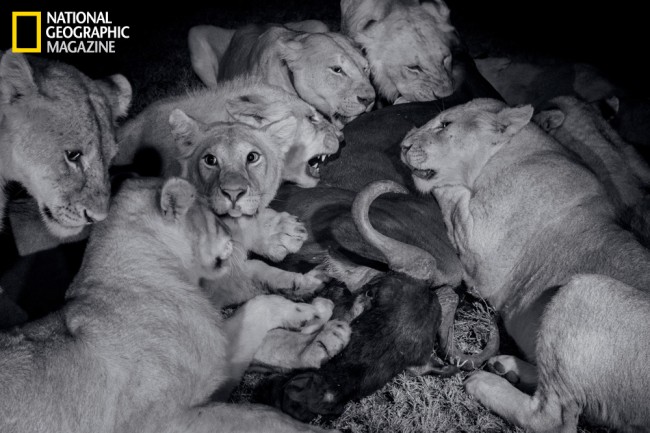 Large cubs of the Vumbi pride and a grown female (fifth from left) feast on a wildebeest. The darkest, moonless hours are prime hunting time because the cats can see better than their prey. These black-and-white photographs were made with infrared light to minimize disruption to the lions. (© Michael Nichols/National Geographic) 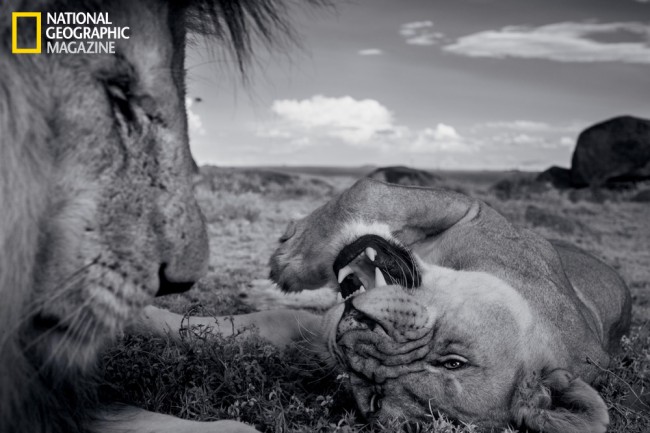 C-Boy and a Vumbi female relax between matings. During estrus a female may be monopolized for days by a single male consort. Dark manes correlate with robustness, and dark-maned studs like C-Boy are preferred. (© Michael Nichols/National Geographic) 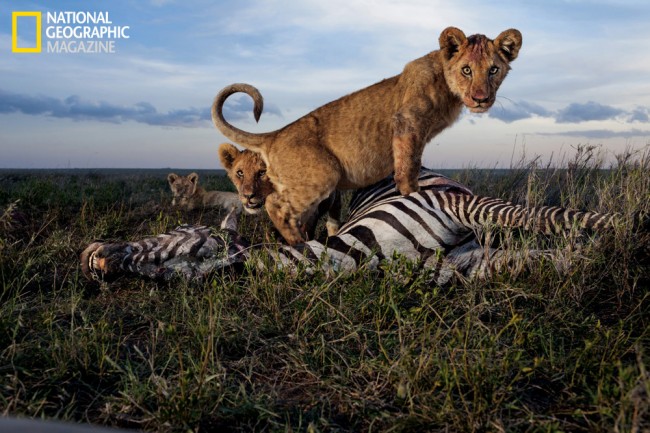 Cubs of the Simba East pride: too young to kill but old enough to crave meat. Adult females, and sometimes males, do the hunting. Zebras and wildebeests rank high as chosen prey in the rainy season. (© Michael Nichols/National Geographic) 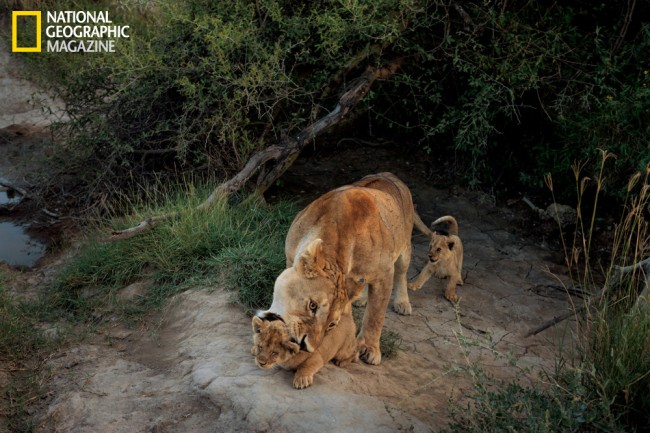 A female wrangles her infant cubs. During the first few weeks, when they’re too young for the competitive jumble among older cubs in the pride and so vulnerable to predators, she keeps them hidden away in a den. But these will soon join the group. (© Michael Nichols/National Geographic) 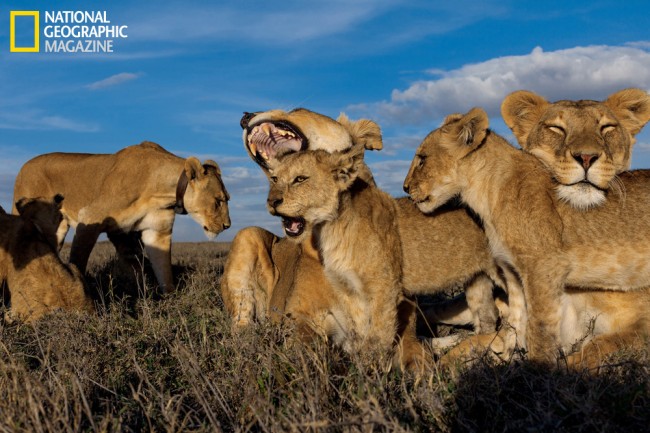 Older cubs like these Vumbi youngsters are raised together as a crèche, or nursery group. Pride females, united in the cause of rearing a generation, nurse and groom their own and others’ offspring. (© Michael Nichols/National Geographic) 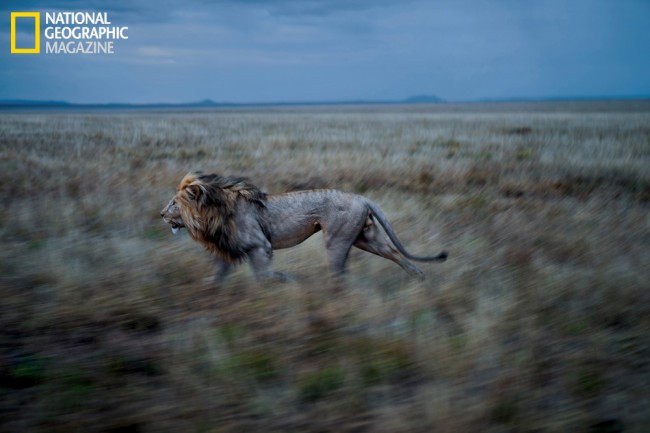 The Adventures Of Fish And Chips
Sharon Montrose's Animal Prints On Display
The Wonderful Art Of Missing Pet Posters
Cats Of War: This Artist Hilariously Combines Military Hardware With Giant Cats
London and Chester Zoo’s Annual Animal Stock Take
Bears Fighting on Road
Adorable Dog Hilariously Photobombs Engagement Photo Shoot
Brave Boy Risks Own Life to Save a Baby Deer from Drowning
Matchbox Art Of Drunk Cats
Photographer Takes Photos Of Cats High On Catnip, And The Results Are Brilliant
These Portraits Reveal The Incredibly Humanlike Expressions Of A Variety Of Apes
A Thrill-Seeking Photographer Risked Life And Limb As He Swam Alongside A Ten-Foot-Long American Crocodile Near Belize
Taiwanese Shop Owner Installed A Glass Ceiling For His Cats And Now They Won’t Stop Staring At Him
This Cat and Dog Duo Love Travelling Together And They Take The Best Pictures
Chameleons Will Hold Anything You Give Them, and They Look Like Tiny Old Men!
The Man Who Tried To Live As A Goat
Pet Photographer Photographer Fell In Love With Foxes After Taking Their Photos In Her Studio
"Urban Deer Of Nara": A Photo Series By Yoko Ishii Documents The Free-Ranging Urban Deers In Japan
Demonic Glowing Eyed Cats And How To Photograph A Feline
Sygmond The Grey Majestic Cat
Cute Illustrations Of Animals Saying Very Depressing Things
These Two Cats In Japan Have Been Trying To Sneak Into A Museum For Years
Heartbreaking Pics Of Aging Dogs Show Them Grow From Puppyhood To Old Age
Why Paint Cats: The Ethics Of Feline Aesthetics
michael, nichols, serengeti