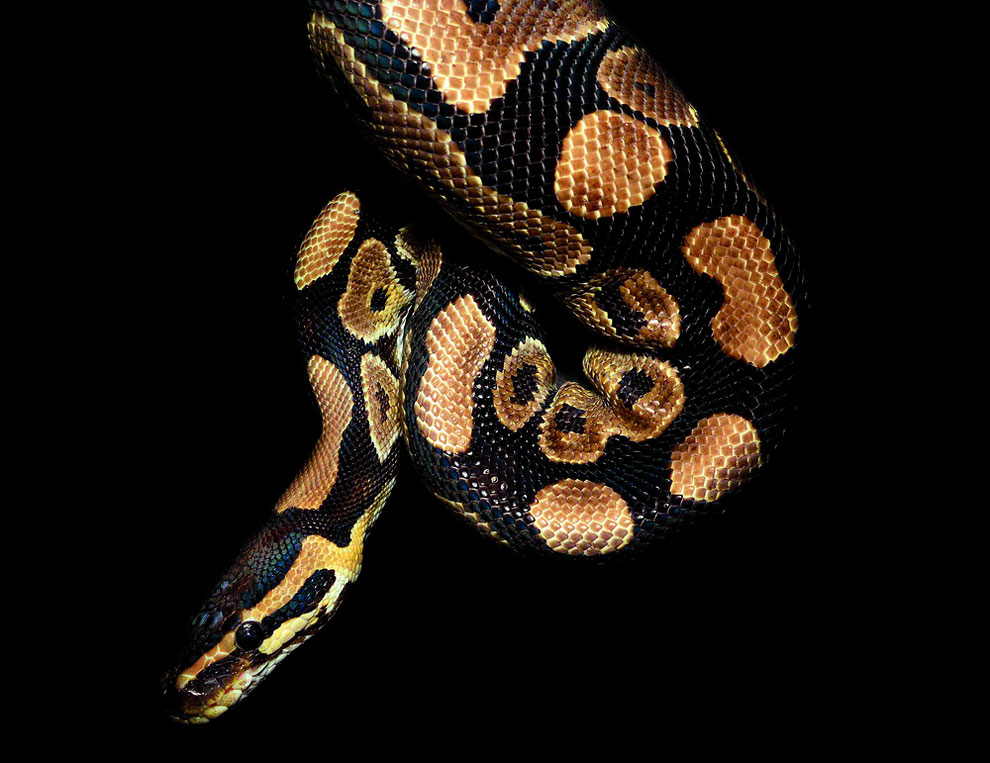 Sometimes it’s easier to hear than to see nocturnal animals. “Listen to them – the children of the night! What music they make!” Dracula says in the famous 1931 movie. In a beautiful book titled “Nocturne: Creatures of the Night”, photographer Traer Scott shines a spotlight, or at least a well-timed flash, on the children of the night. Here you see the coils of a Burmese python, which can grow up to 12 feet long in the rain forests and wetlands of Southeast Asia. (Photo by Traer Scott/Chronicle Books) 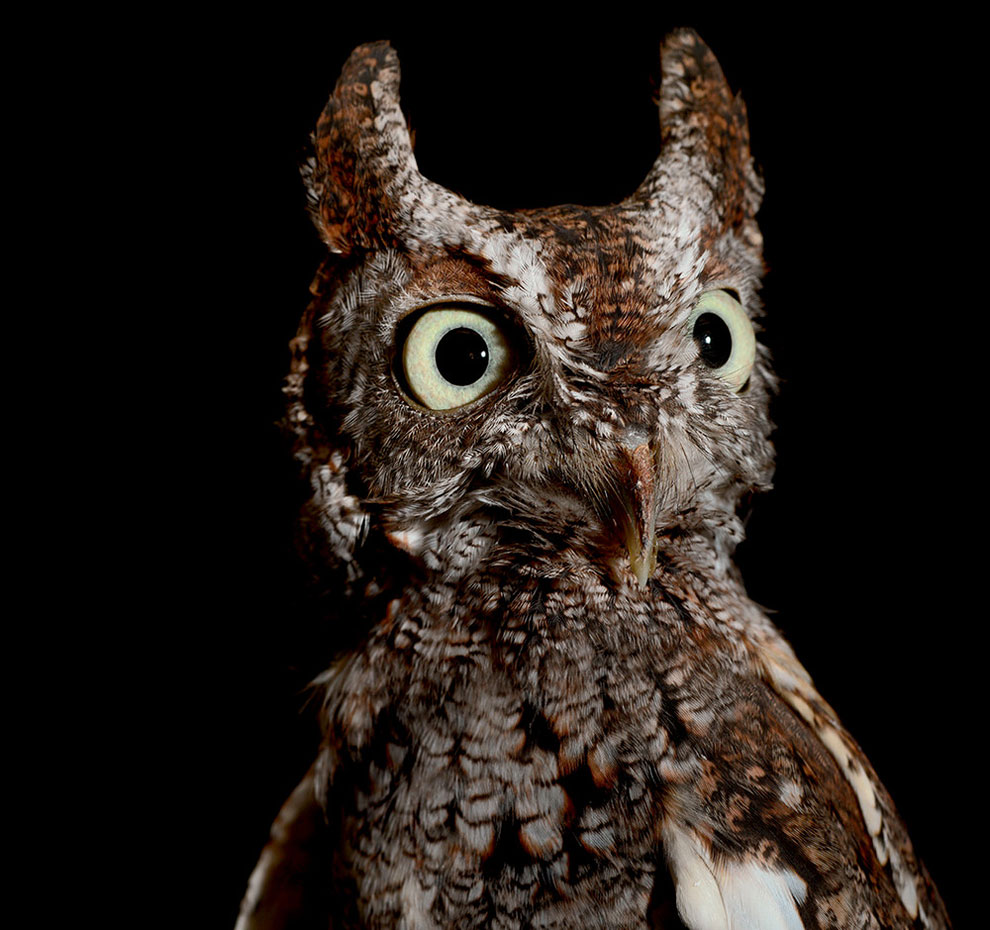 The eerie call of the pint-sized Eastern screech owl sounds much more like a high-pitched warble or tremolo than a screech. Because of their small size (generally less than 9 inches in height) and adept camouflage, screech owls are much less often seen than heard. (Photo by Traer Scott/Chronicle Books) 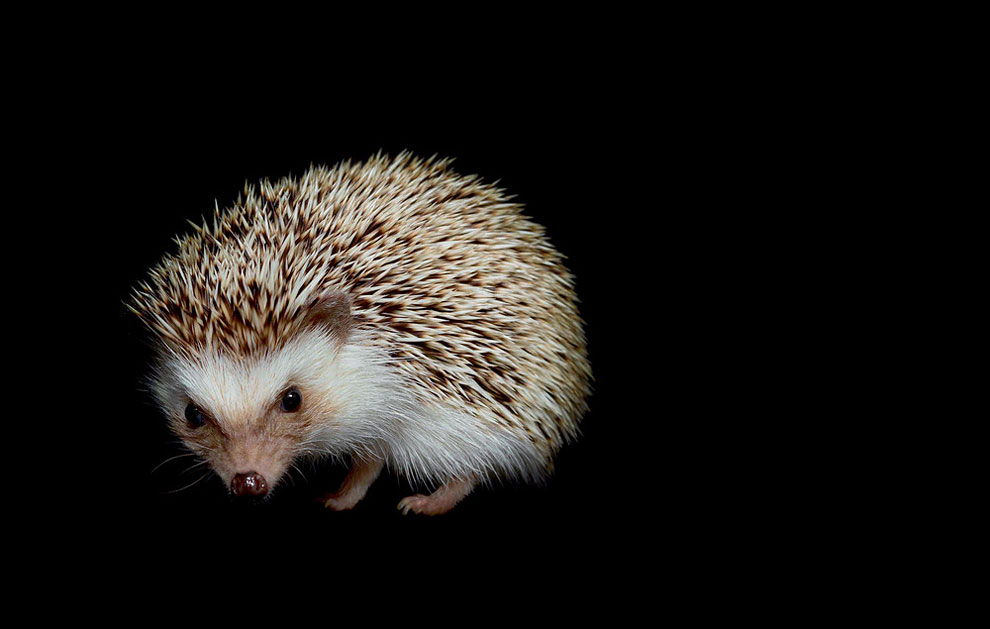 Hedgehogs are extremely vocal. They communicate their preferences and moods using a repertoire of grunts, chirps, hisses and squeals. When truly threatened, a hedgehog’s primary defense is to roll up into a tight ball with all of its spines facing outward. Hedgehogs are nocturnal because most of the tiny animals they feed on are nocturnal as well. (Photo by Traer Scott/Chronicle Books) 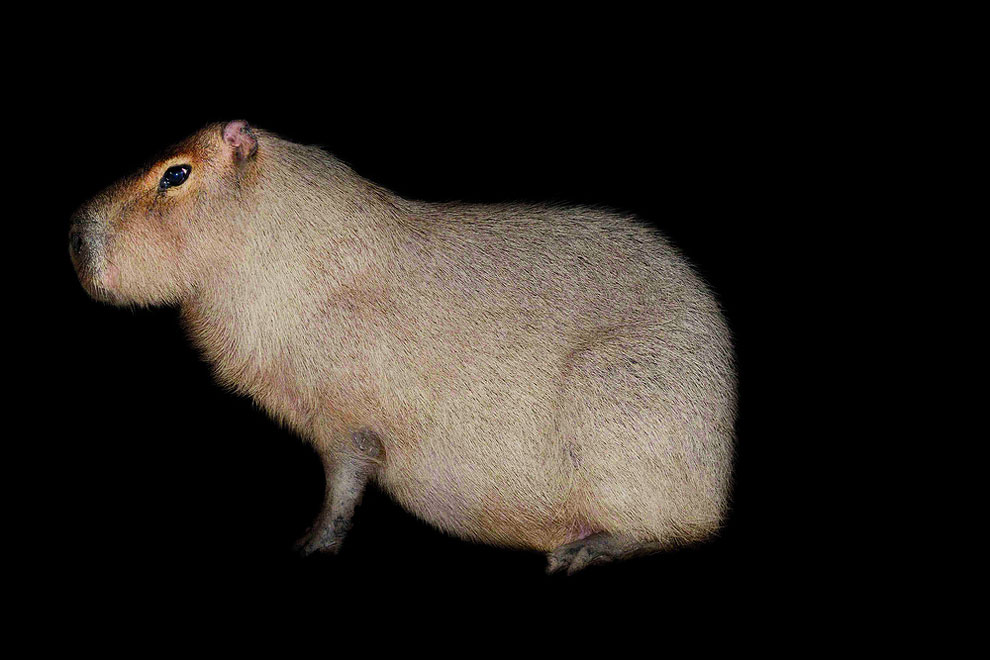 A giant cousin of the guinea pig, the capybara is the largest rodent in the world, with adults generally weighing between 80 and 140 pounds. Capybaras are semi-aquatic herbivores that live in the dense forests near lakes, streams and marshes in Central and South America. They are usually most active at dawn or dusk, but they become nocturnal in areas where they are threatened by humans or other predators. (Photo by Traer Scott/Chronicle Books) 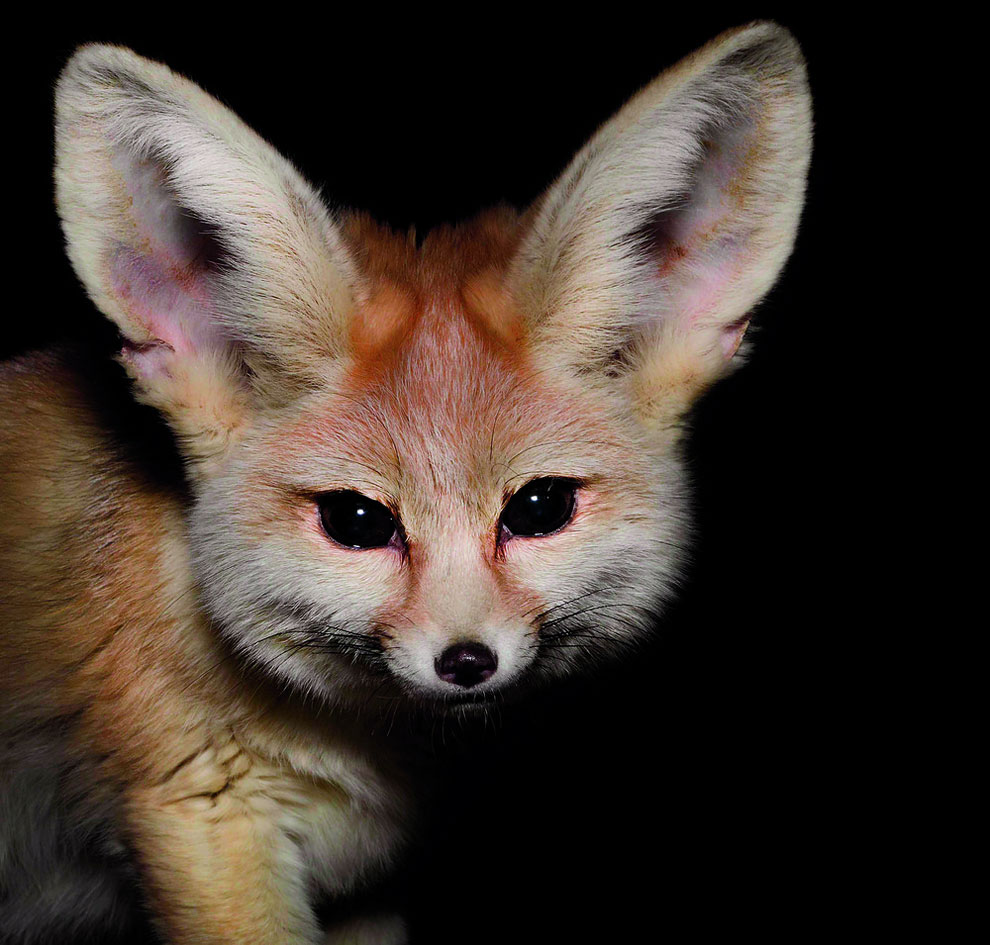 Although the fennec fox is the smallest of all fox species, it boasts the largest ears, relatively speaking. Beyond making these tiny, Chihuahua-sized foxes inimitably adorable, those big ears help the animals dissipate body heat. The Saharan fennec fox is the national animal of Algeria, and is a nocturnal hunter of rodents, insects, birds and eggs. It burrows underground during the heat of the day. (Photo by Traer Scott/Chronicle Books) 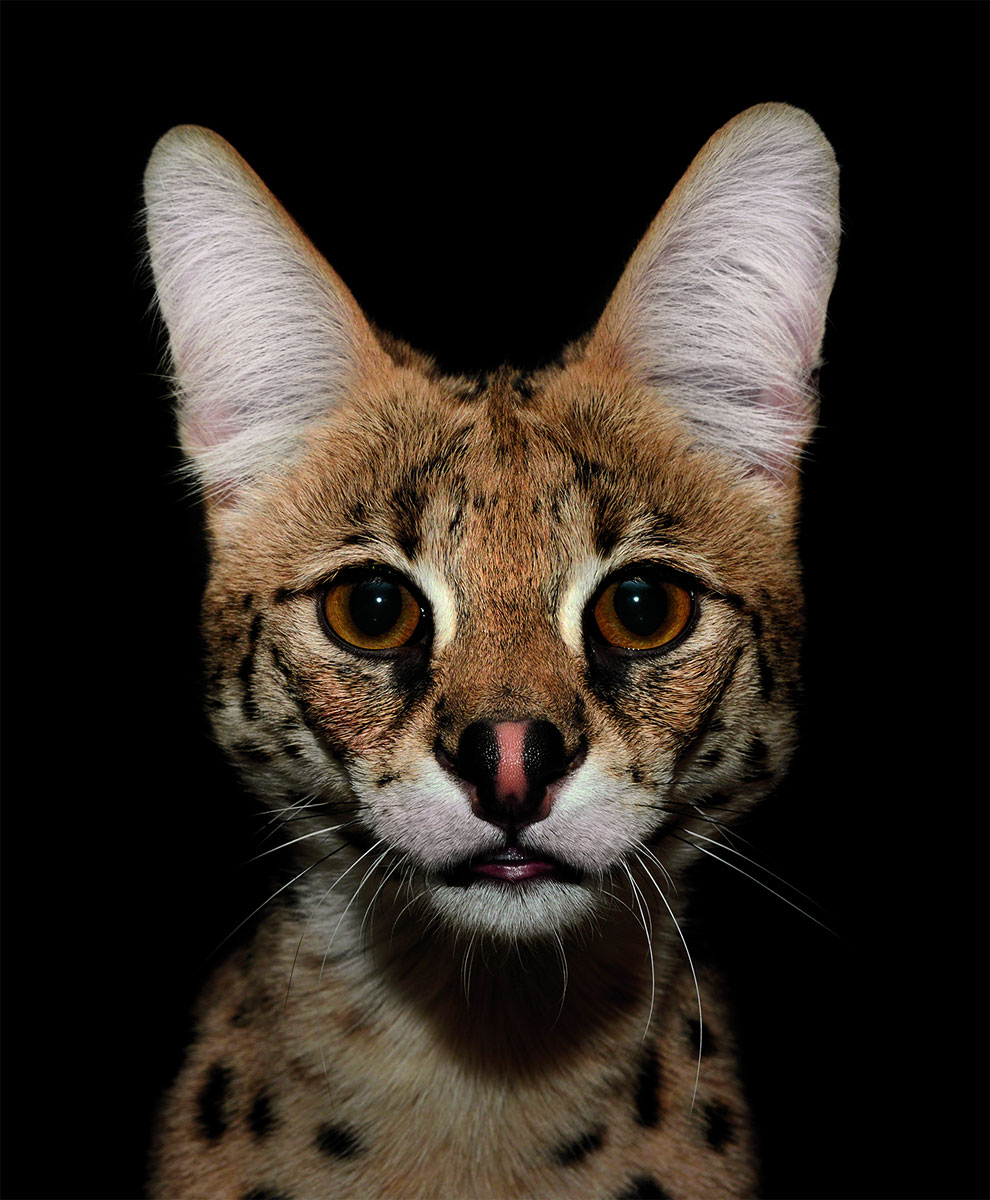 The elegant serval cat was worshipped by the ancient Egyptians for its grace and strength. Although it’s barely twice the size of an average housecat, the serval is the most efficient hunter of all wildcats, with successful kills approximately half of the time. The serval’s large ears give it an acute sense of hearing, and it has the longest legs of any cat relative to body size. (Photo by Traer Scott/Chronicle Books) 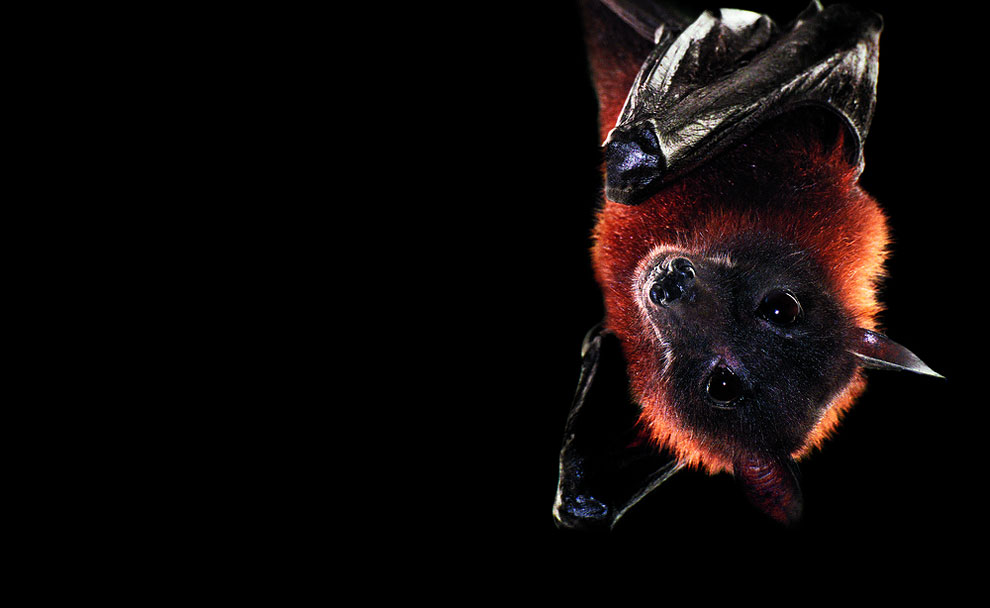 The Indian flying fox, one of more than 1,100 species of bats, is also known as the giant fruit bat. Like vampire bats and most other bat species, the Indian flying fox is nocturnal. But unlike vampires, this species doesn’t lap up blood. Instead, it feeds on fruit and tree flowers. (Photo by Traer Scott/Chronicle Books) 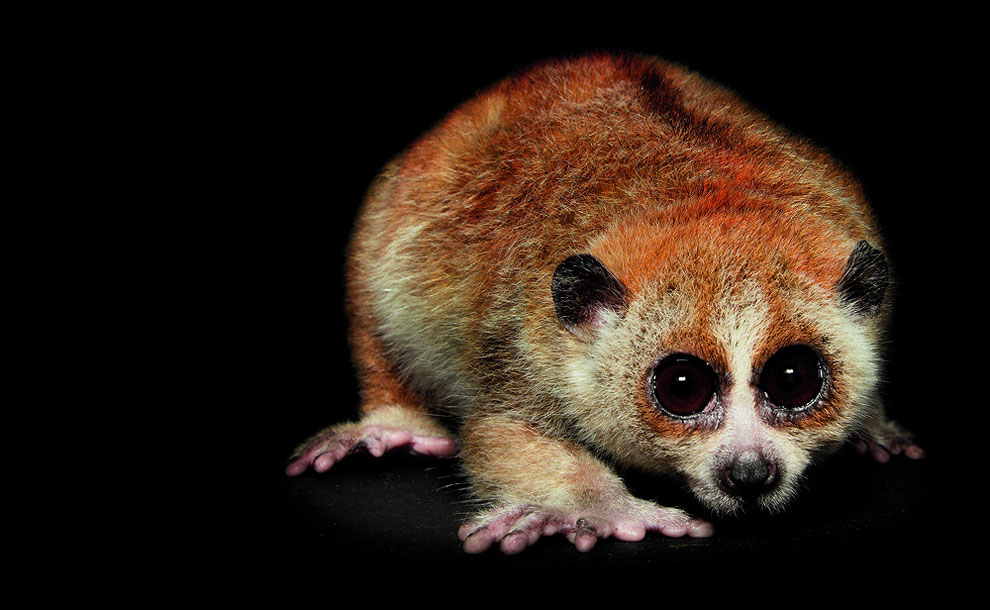 The pygmy slow loris is found in the forests of Southeast Asia. The tree-dwelling primate’s eyes are optimized to hunt prey at night. In addition, it has a poisonous bite, which it gets by licking a toxic secretion from glands on the inside of its elbows. (Photo by Traer Scott/Chronicle Books) 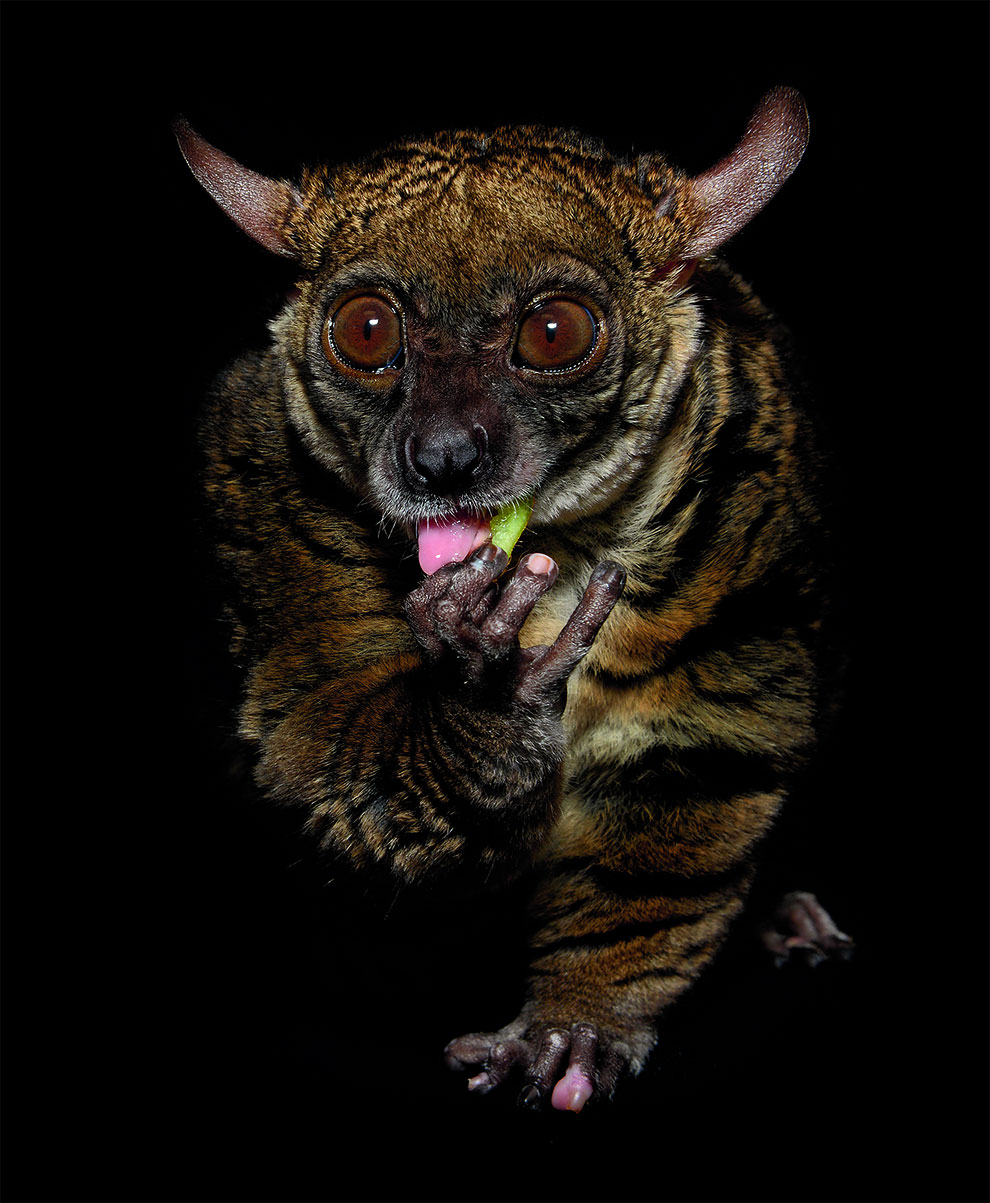 Galagos, more commonly known as bush babies, are tiny African primates with remarkable jumping abilities. Thanks to the elastic energy stored in the tendons of their lower legs, small-eared galagos can jump 6 feet straight up in the air. (Photo by Traer Scott/Chronicle Books) 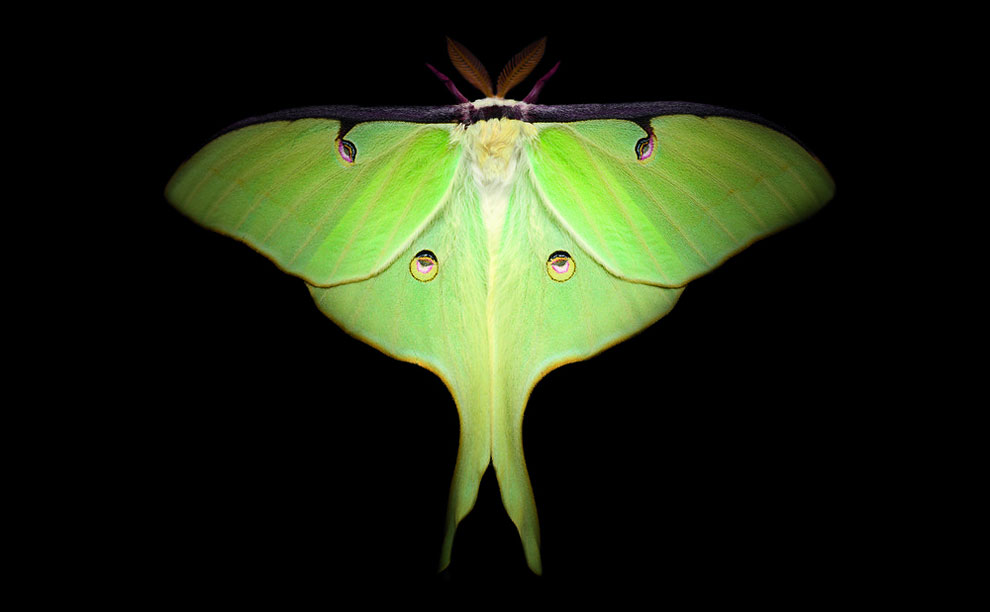 The luna moth is one of the largest moths in North America, with wingspans often reaching almost 5 inches. Like most moth species, it’s most active at night. The lime-green luna moth has prominent markings on its wings that greatly resemble eyes. Researchers suspect those “eyes” are meant to distract would-be predators from the moth’s small, fragile body. (Photo by Traer Scott/Chronicle Books)

This Artist Makes Funny And Creepy Cat Hybrids Bred In Photoshop. Have Things Gone Too Far?
Fisherman Catch Record Breaking Mako Shark
The 'Weird Ass Bird Found In Venezuela' Is A Potoo, Have The Cutest Face You've Ever Seen
Scared Of Coronavirus, Chinese People Have Started Putting Masks On Their Pets
Meet Cute Friendly Swimming Pigs In Bahamas
"The Dogs Show": Photographers Explore The Amazing World Of Dog Breeds
Photographer Continues to Capture Hiding Cats in Venice
Valais Blacknose Sheep Always Look Like They’re Posing For A Metal Album Cover
Polar Bear Came To Play
A Great White Shark Preserved In Formaldehyde In An Abandoned Wildlife Park
A Landscape Photographer Turned The Camera On Himself To Take A Set Of Incredible Selfie While Visiting Some Of The World's Most Beautiful Destinations
Failed Animals Panoramic Photos That Are Worse Than You’d Think
When You Don't Read The "Don't Feed The Monkeys" Sign
A Visit To The World’s Only Black-Cat Cafe
Designed By Nature: Russian Fisherman Posts Terrifying Creatures Of The Deep Sea Again, And People Want Him To Stop
Fight!
People Spend Quarantine by Making Tiny Crochet Couches For Their Cats
Fox Village In Japan Is Probably The Cutest Place On Earth
Plufl – The World’s First Dog Bed For Humans
Zookeeper Can’t Take It Anymore, Decides To Add Pokemon Go Signs Next To Animals
Entries of the Scottish Seabird Centre's Nature Photography Awards
Teenage Girls Iron Their Hair Before A Night Out In New York City In 1964
Princess Cheeto, A Sweet Tuxedo Cat Who Happily Poses In Really Creative Photos For Her Human
Want to Take Your Pet Fish for a Walk? There’s a Bag for That!
creatures, night