When Amanda Guarascio and her friend Dylan Parkinson heard about a lost and lonely dog which was living in the mountains near the town of Carbonado, Washington, they decided they would do whatever it takes to help bring it home. 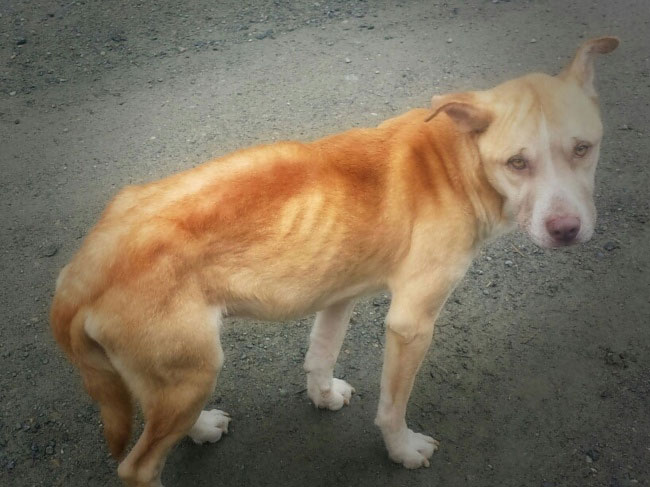 The problem was that the dog had for a long time been refusing to come anywhere near to people; it is impossible to attract it even with food. Amanda spent an hour trying to approach the dog and give it some food. 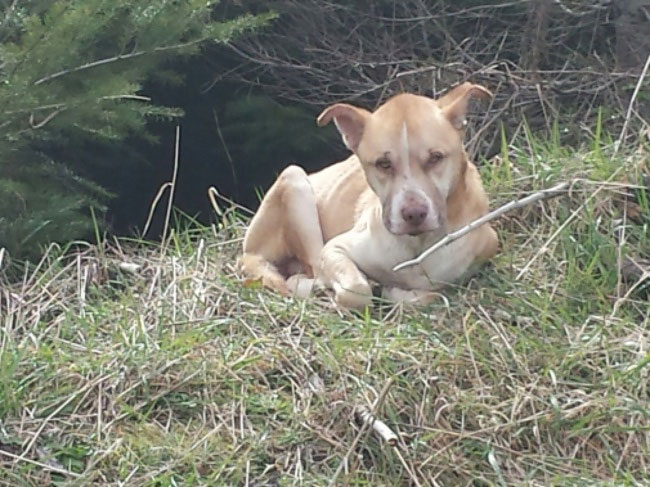 Her efforts were in vain, and they turned around heading for home. But ultimately they just couldn’t let the dog stay up in the mountains alone, and soon turned back. They made efforts to approach to the dog again up until 3 am. The most heart-warming thing was that despite having already spent so much of their time trying to help the stray dog, Amanda and Dylan stubbornly refused to give up and go home. They just kept trying and trying to reach the dog to bring it into safety and care. Eventually, they came up with a risky, but very interesting idea. 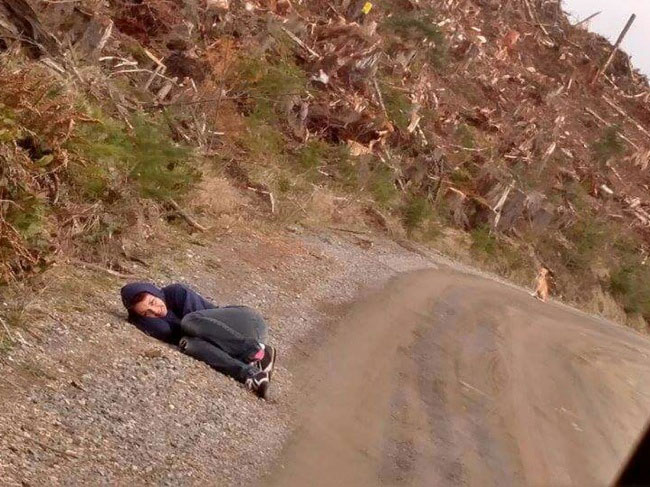 “I got out of the truck and lay down in the foetal position on the road, right by the pup but with my back to him. He started growling a little bit, but you could tell he was intrigued. For a while, he just sat staring at me, but eventually his curiosity got the better of him, and he came closer. I lay in the road for about 20 minutes while he walked around close by, getting used to my scent. Then he lost interest and wandered off, lying down on the grass nearby.”

It was then that Amanda slowly began to creep up to the dog. 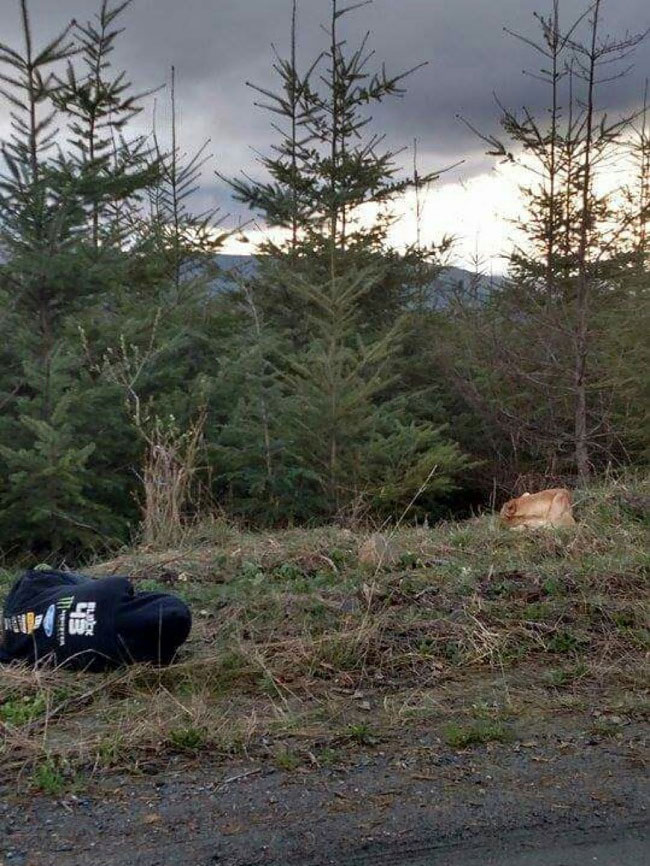 It took a whole hour to get right up close to the dog. If it felt uncomfortable, the girl simply froze on the ground so it could get used to her presence. 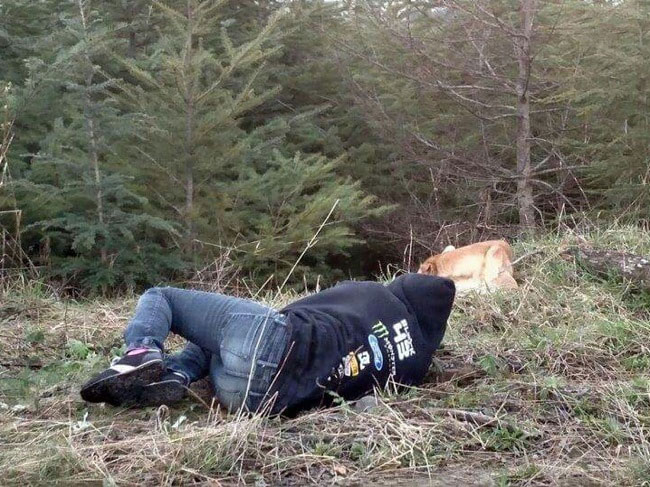 Whenever it started growling, Amanda would yawn and whine to calm the dog down — these sounds are known to help pacify such animals. Oddly enough, Amanda’s method eventually met with success! 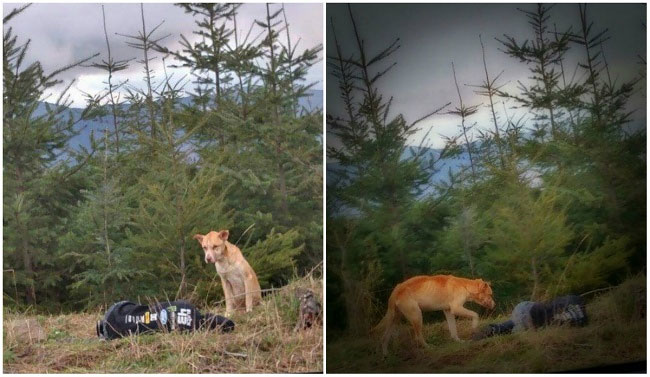 Eventually, the dog lay down side by side next to the girl, warming itself. 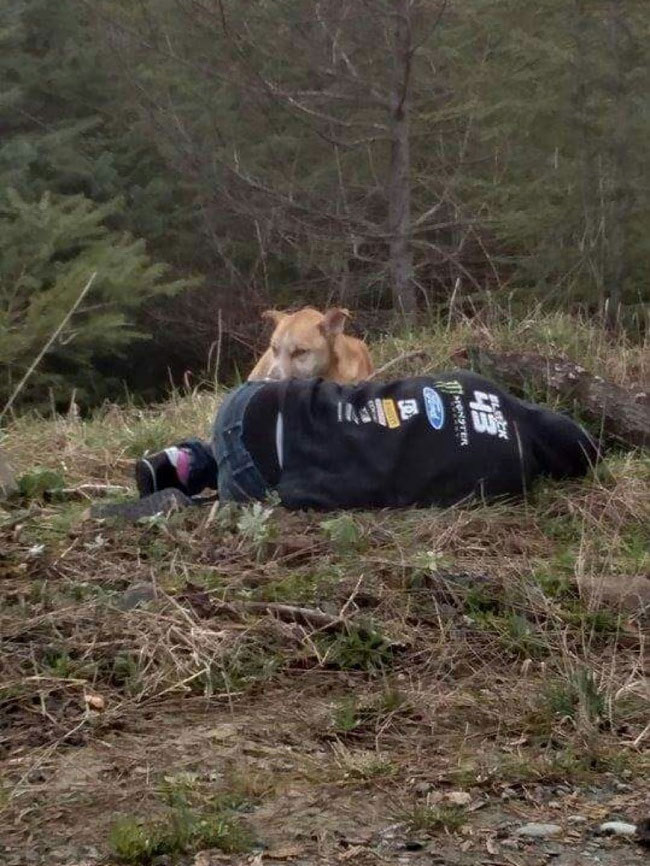 After it stopped seeing Amanda is a threat, they managed to persuade it to sit in their car, and they then took the dog to the vet. 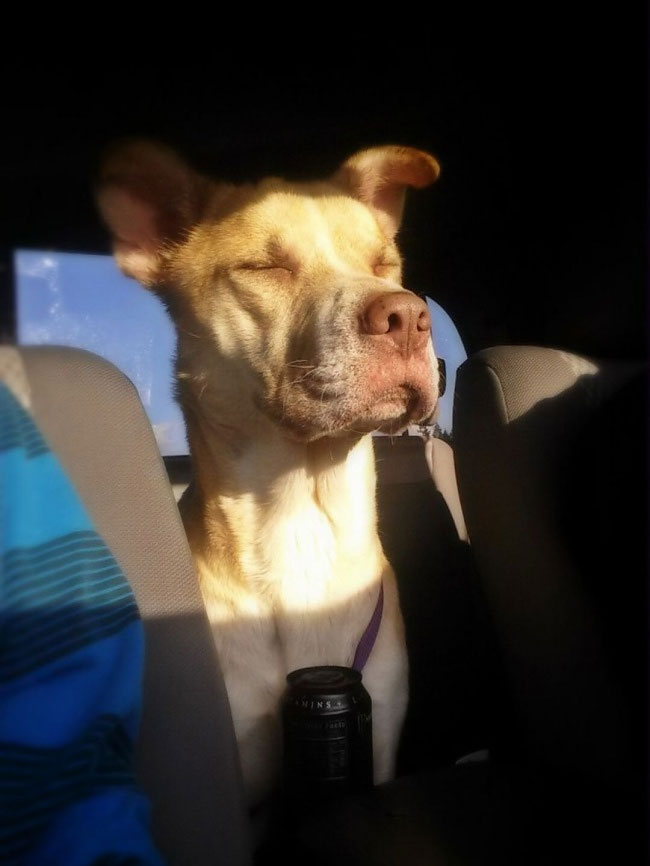 The guys are now looking for a good owner for the dog, but the first and most important step in its new life has clearly already been made. The fearless Amanda became a true saviour to this beautiful animal. 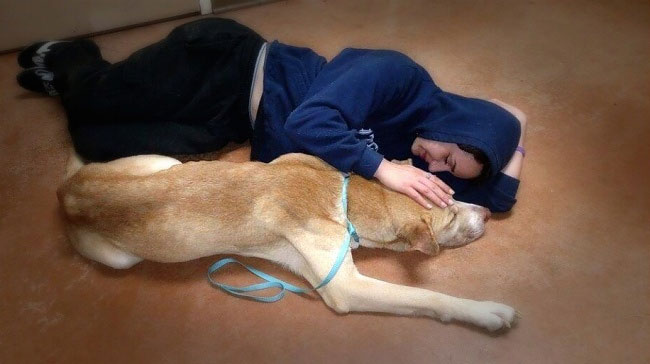 This little story once again proves that a positive outlook and unconditional love for others can produce miracles. It’s kindness like this which makes the world go round.

Via Lost & Found Pets, Bright Side

3D Printed T-Rex Arms For Chicken Cosplay
Seriously, 2022 Social Justice Kittens Calendar Is Here!
Longcroft - Luxury Cat Hotel
Low Resolution Pets Behind Pixelated Glass Doors
2015 World's Ugliest Dog Contest
Corgi Gets Photoshopped Into Popular Movie Posters
80-Year-Old Man Builds A Dog Train To Take Rescued Stray Dogs On Adventures
Rare And Sentimental Photographs Of Homeless Children In Soviet Union In The 1920s
Thousands of Starlings Descend on Rigg, Scotland
Mimi The Cat Cruises With Wangcai The Dog Over The Streets
This Facebook Group Is Dedicated To Crappy Wildlife Photos That Are So Bad They’re Good
A Shocking Campaign Uses Graphic Images To Point Out The Damage That Plastic Pollution Has On The Ocean’s Wildlife
Nubian Ibex Make the Most of Lockdown in Israel
This Art Director Beautifully Redesigns Homeless People's Signs
Australian Native Wildlife: The National Geographic Photographer Creates A Photo Archive Of Biodiversity Around The World.
There’s A Species Of Wild Cats Where The Adults Look Like Kittens Their Entire Lives
Trapped Raccoons Saved from a Waste Container
Stunning Images Of The Marine Seals Were Captured By A Diver Who Did Well To Hang Onto His Camera When One Of The Seals Attempted To Take A Bite Out It
The Wild Side Series: The World’s National Animals And Their Tracks
World's First "Kitten Bar" Opens in Japan
Beautiful Photos Of Mali The Dog Enjoying Christmas Time
Hilarious Comics Reveal The Dark Side Of Animals
Baby Zoo Animals, Part 2
Photographer Continues to Capture Hiding Cats in Venice
homeless, ingenious, inspirational, saved