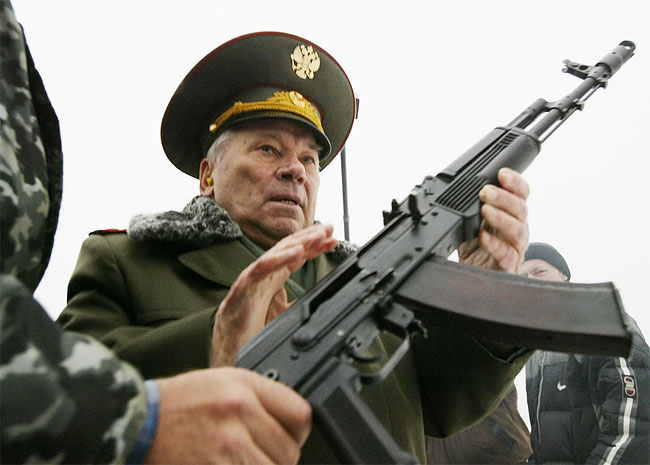 Mikhail Kalashnikov, the father of the world’s most popular assault rifle, is handed an AK-74 November 23, 2002 in Izhevsk,1000 East km. from Moscow. November 23 marked the 55th anniversary of the release of the first Kalashnikov gun. According to the Moscow-based Center for Analysis of Strategic and Technologies some 70 million to 100 million Kalashnikovs have been built worldwide since 1947, compared about 7 million to Kalashnikov’s Western rival the M-16 assault rifles. (Photo by Oleg Nikishin/Getty Images) 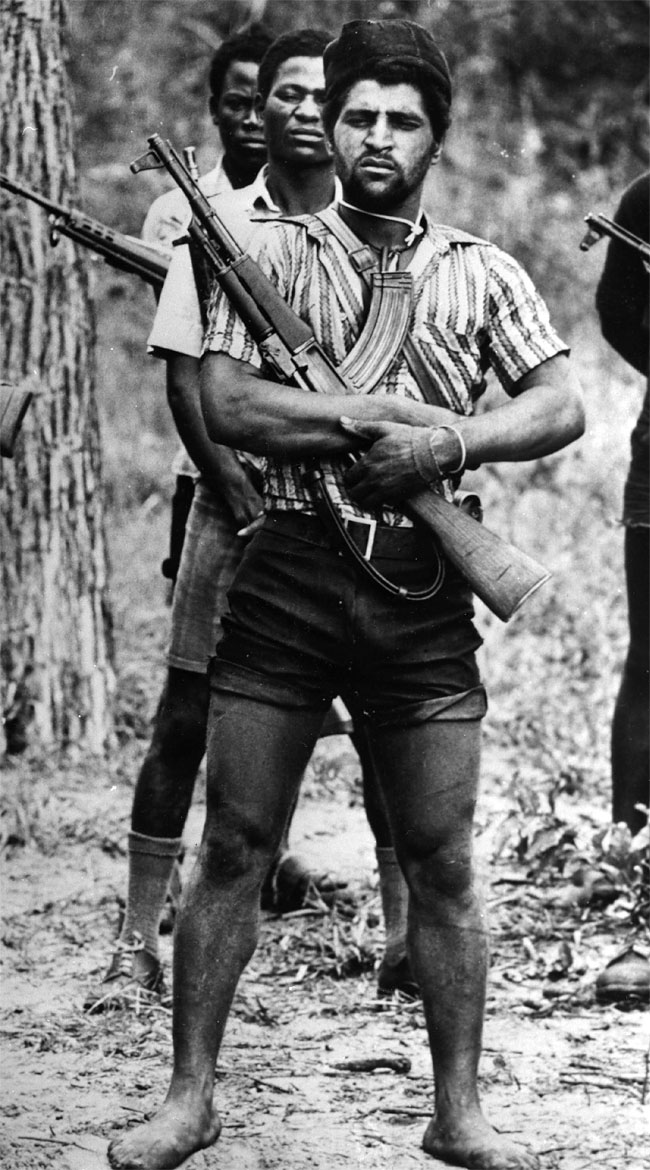 Fighters of the UNITA pro-Western forces armed with a local variant of the AK-47 Kalashnikov during the civil war in Angola, 1977. (Photo by Cloete Breytenbach/Getty Images) 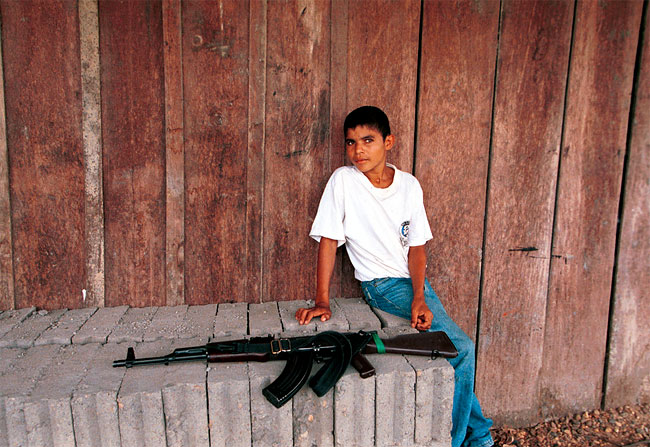 A boy sits near an AK-47 assault rifle at a FARC check point February 26, 2001 in Cristales, Colombia. The FARC (Revolutionary Armed Forces of Colombia) is the country’s largest rebel group and has been waging an insurgency against the government for decades, at the cost of some 3,000 lives a year. (Photo by Carlos Villalon/Newsmakers) 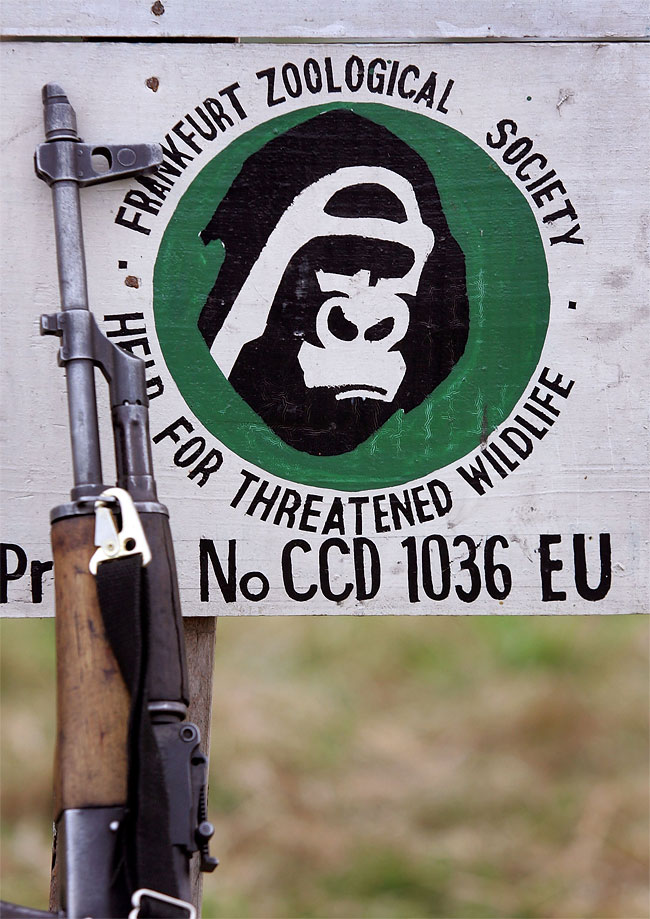 An AK-47 assault rifle rests against a sign at the entrance of a paramilitary training center for park rangers July 21, 2006 at Ishango in the Virunga National Park in eastern Democratic Republic of Congo. (Photo by John Moore/Getty Images) 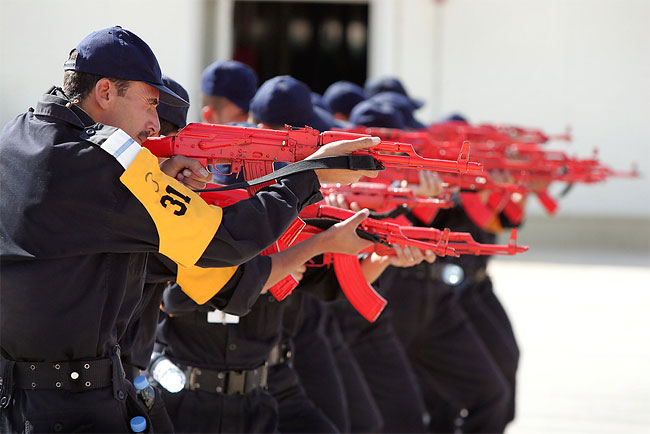 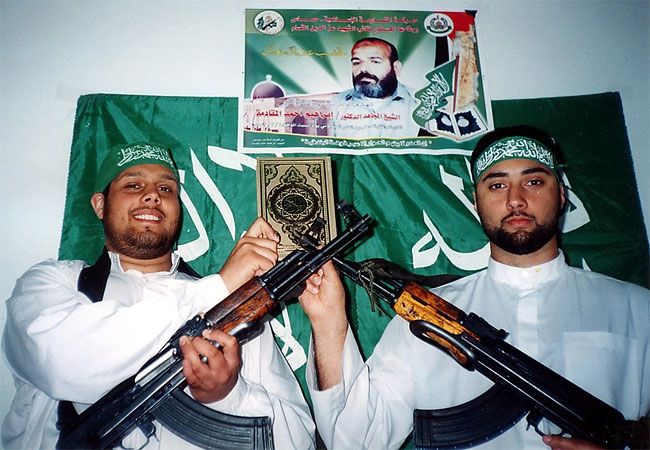 In this frame grab handout image released March 8, 2004 by Hamas nearly a year after their deaths, British Muslim suicide bombers, 27-year-old Omar Khan Sharif (R) and 22-year-old Asif Muhahmmad Hanif stand together in uniform as they hold AK 47 rifles, and stand together under a poster of Hamas leader Ibrahim al-Maqadmehin, February 8, 2003 in Gaza Strip. (Photo via Getty Images) 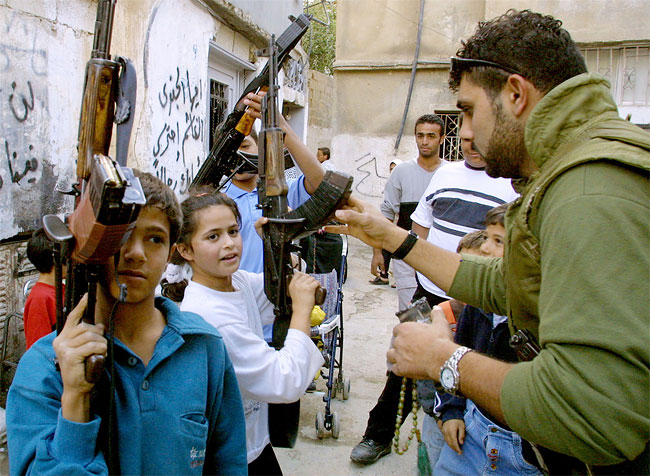 A Palestinian gunman gives his AK-47 assault rifle to a young girl to hold October 26, 2001 in the al-Azzar refugee camp, as he takes a break from fighting with Israeli soldiers in the West Bank town of Bethlehem. (Photo by David Silverman/Getty Images) 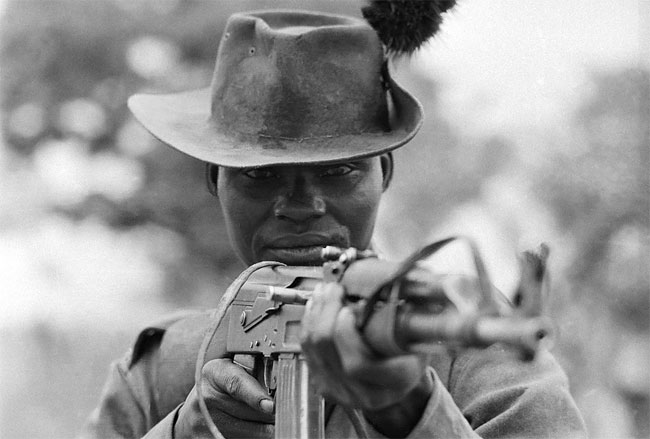 A soldier in the anti-government army of the Sudan holds his Kalashnikov AK-47 automatic rifle at the ready, on 8th March 1971. (Photo by John Downing/Express/Getty Images) 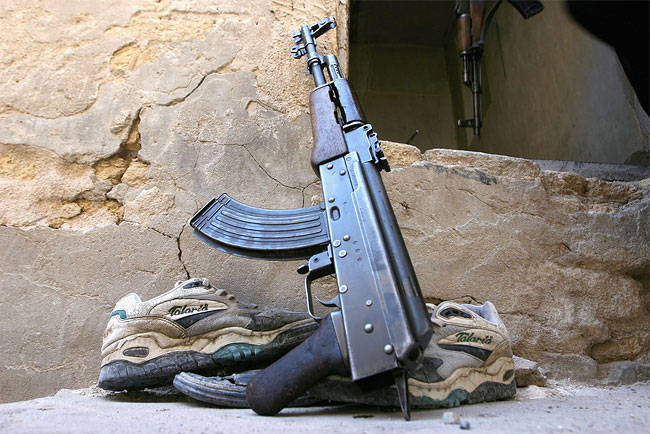 An AK-47 rifle is laid against the wall of a make shift militia mosque on August 20, 2004 in Najaf. (Photo by Ghaith Abdul-Ahad/Getty Images) 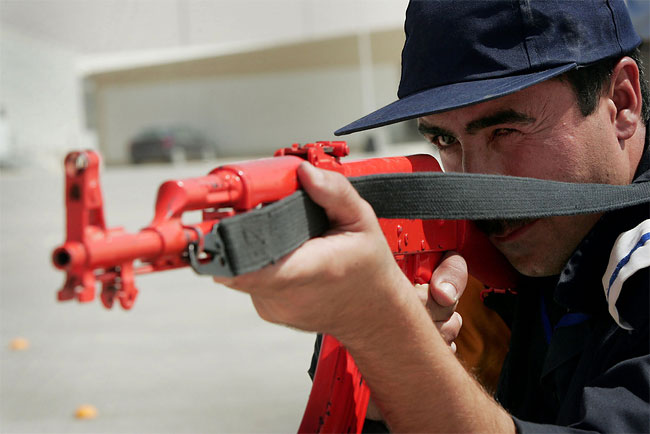 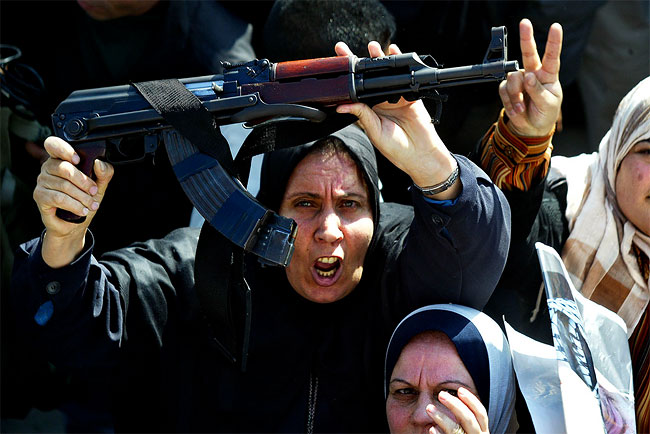 A Palestinian woman holds an AK-47 above her head as she shouts pro-Arafat slogans during a rally to mark the 39th anniversary of the Palestinian National Liberation Movement’s (Fatah) foundation on December 31, 2003 in Gaza City, Gaza Strip. (Photo by Abid Katib/Getty Images) 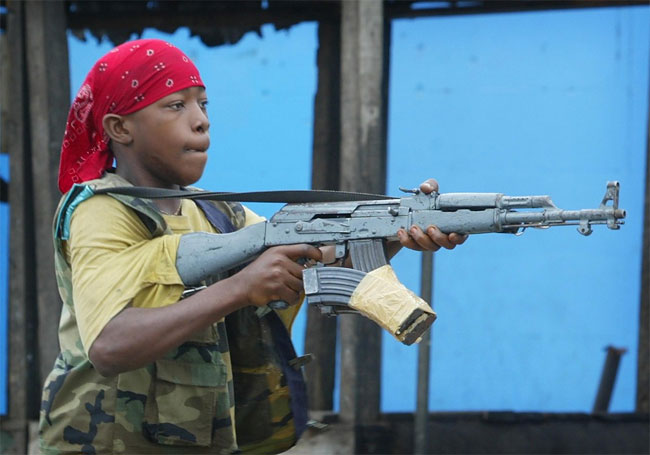 A child soldier loyal to the government fires at rebels July 23, 2003 at a key bridge in Monrovia, Liberia. (Photo by Chris Hondros/Getty Images) 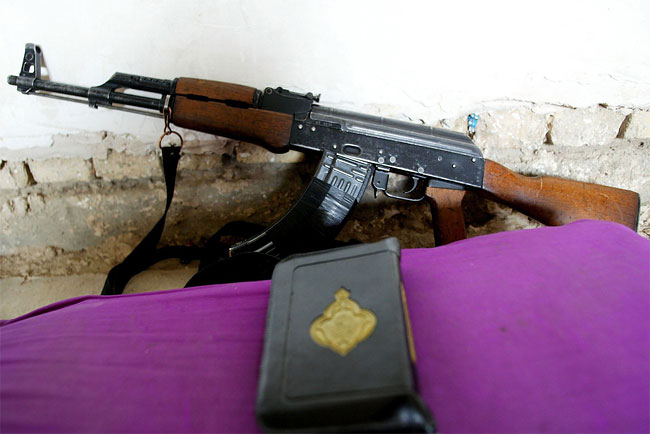 An AK-47 rifle and a Quraan are pictured against a wall in a fighters nest on November 7, 2004 in the city of Fallujah, Iraq. (Photo by Ghaith Abdul-Ahad/Getty Images) 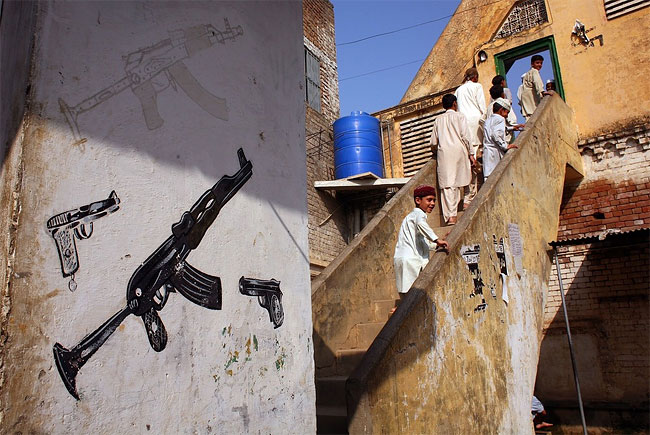 A shop advertising AK-47 assault rifles and pistols stands next to a school for Islamic studies, or “madrassa”, September 10, 2006 in the tribal area of Sakhacot in western Pakistan. Small shops produce and sell thousands of weapons to people in the area near the porous border with Afghanistan. (Photo by John Moore/Getty Images) 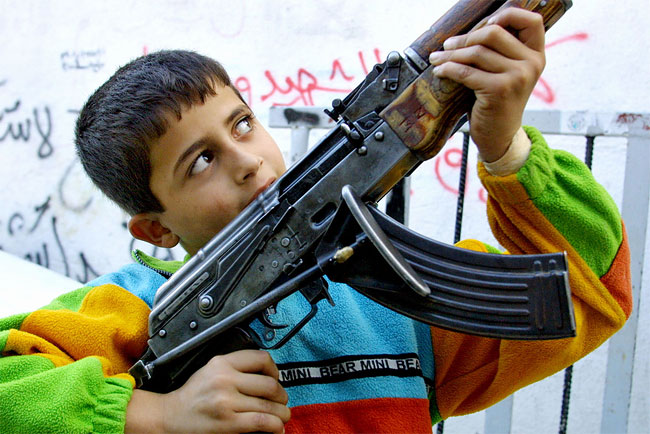 A Palestinian boy holds a gunman’s AK-47 assault rifle during a round of fighting with Israeli soldiers October 26, 2001 in the al-Azzar refugee camp located within the West Bank town of Bethlehem. (Photo by David Silverman/Getty Images) 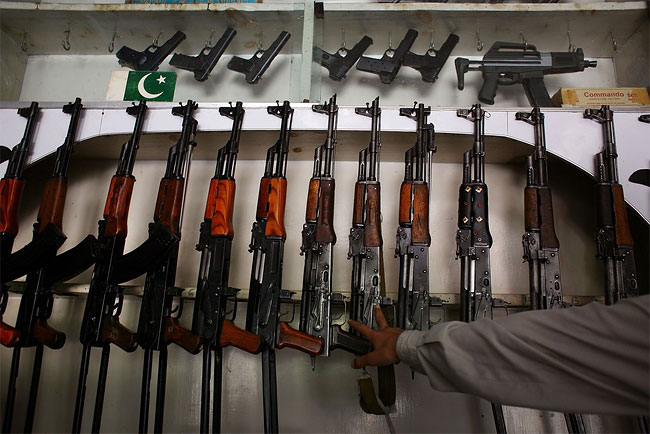 A shopkeeper shows off his wares, Russian, Chinese and Pakistani-made AK-47 assault rifles, September 10, 2006 in the tribal area of Sakhacot in western Pakistan. The Russian AK-47 retail price was $410, the Chinese $300 and the locally made Pakistani version just $125. (Photo by John Moore/Getty Images) 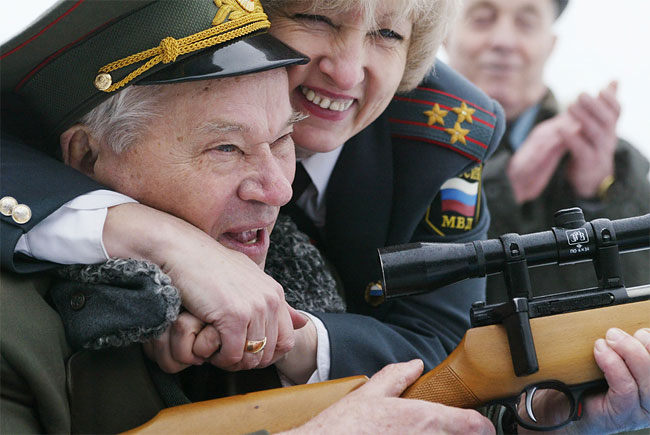 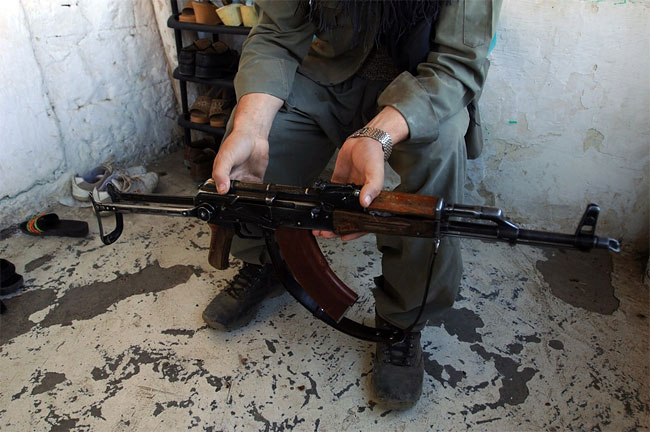 A village guard show his AK-47 in the southeastern Turkish province of Sirnak, October 19, 2007. (Photo by Burak Kara/Getty Images) 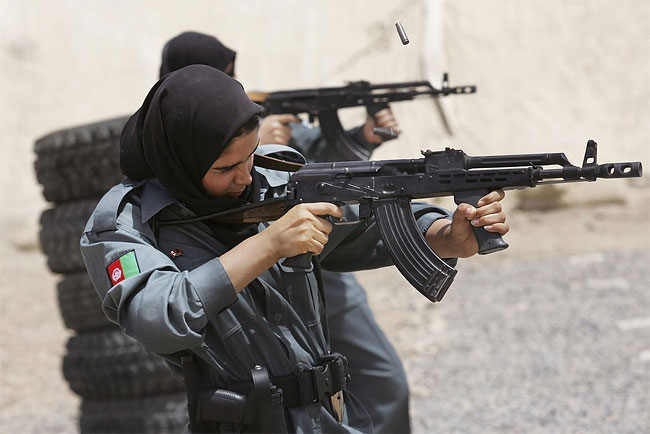 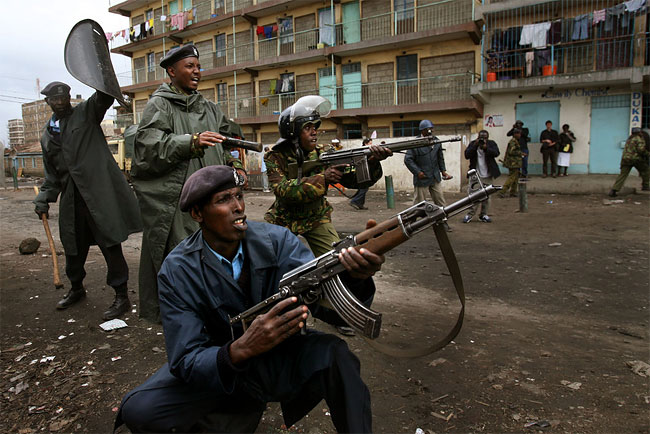 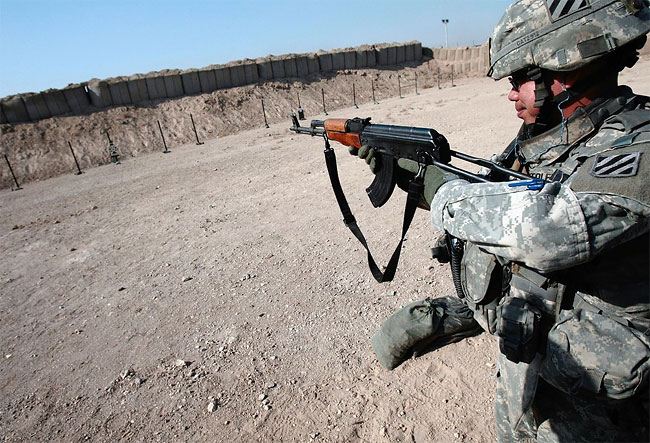 A member of the 2-69 Armored Battalion of the 3rd Infantry Division fires the AK-47 assault rifle during target practice November 24, 2007 in Baghdad, Iraq. (Photo by Chris Hondros/Getty Images) 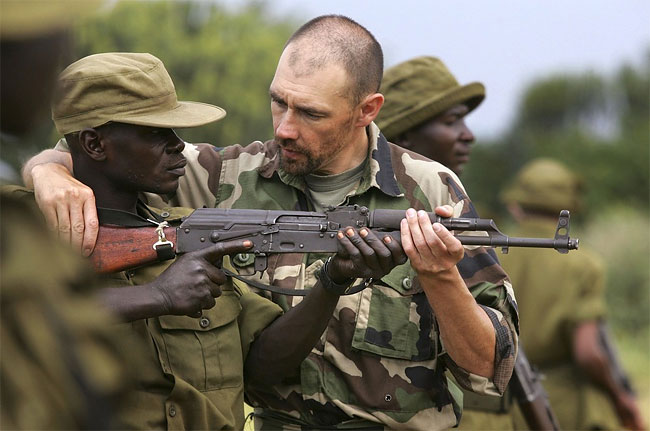 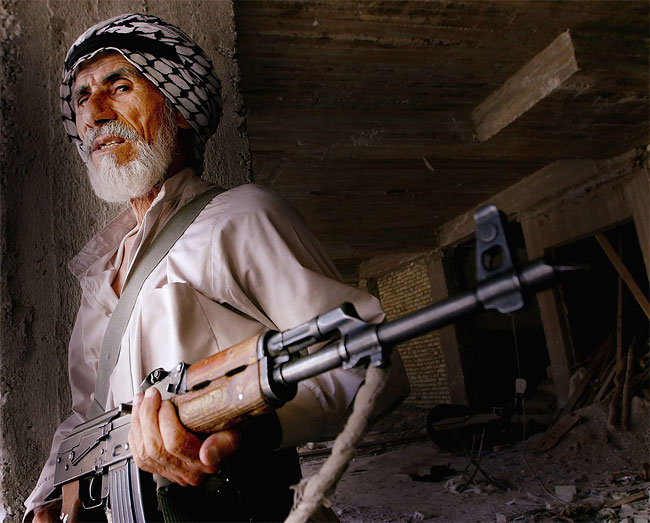 An Iraqi Shiite man loyal to the radical Shiite cleric Moqtada al-Sadr holds his AK 47 during the fighting on August 6, 2004 in Najaf, Iraq. (Photo by Ghaith Abdul-Ahad/Getty Images)