Stunning Winning Images of The Wildlife Photographer of the Year 2022

The winners of the Natural History Museum’s prestigious Wildlife Photographer of the Year competition. Karine Aigner’s remarkable image of a buzzing ball of cactus bees spinning over the hot sand on a Texas ranch won the Grand Title award. ‘Wings-whirring, incoming males home in on the ball of buzzing bees that is rolling straight into the picture. The sense of movement and intensity is shown at bee-level magnification and transforms what are little cactus bees into big competitors for a single female,’ said chair of the jury, Rosamund Kidman Cox. 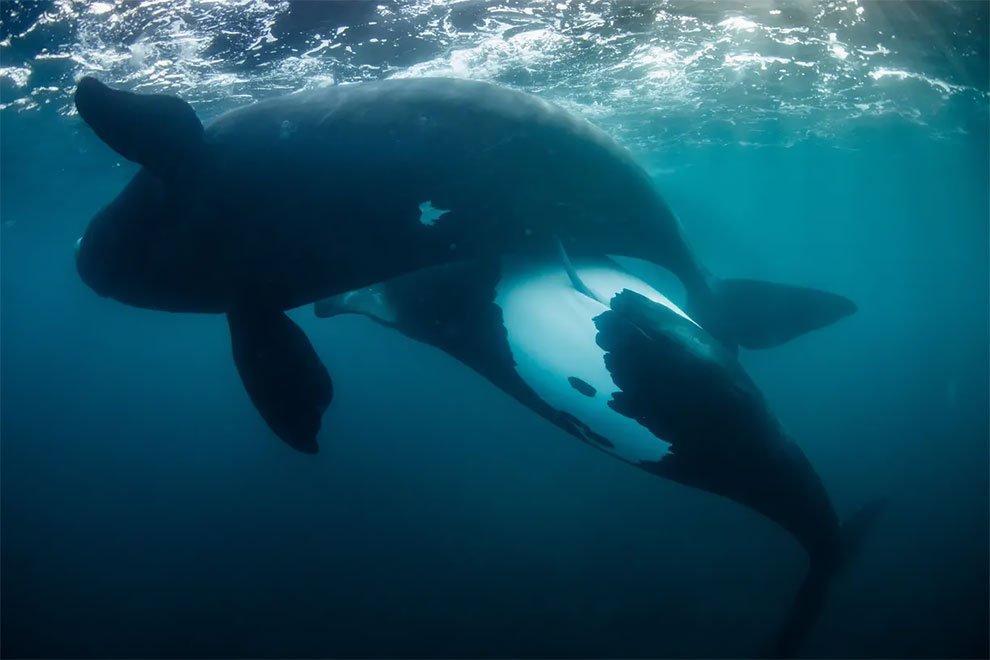 A hopeful moment for a population of whales that has survived against all odds. Hindered by poor visibility, Robinson used a polecam to photograph the whales gradually moving towards his boat. Pushing his camera to its limits, he was relieved to find the image pin-sharp and the moment of copulation crystallised in time. Known by the Māori as tohorā, the New Zealand population was hunted to near extinction in the 1800s, so every new calf offers new hope. Deas Head, Auckland Islands, New Zealand Photograph: Richard Robinson/Wildlife Photographer of the Year

More: The Wildlife Photographer of the Year, Instagram h/t: guardian 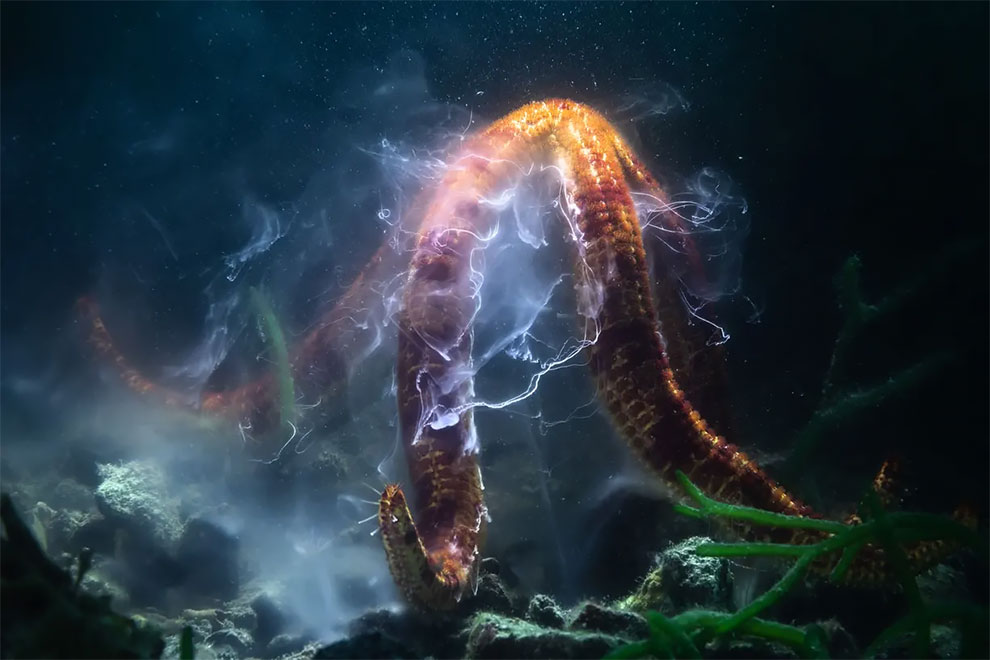 The electrifying reproductive dance of a giant sea star. As the surrounding water filled with sperm and eggs from spawning sea stars, Wu faced several challenges. Stuck in a small, enclosed bay with only a macro lens for photographing small subjects, he backed up to squeeze the undulating sea star into his field of view. The dancing posture of spawning sea stars rising and swaying may help release eggs and sperm, or may help sweep the eggs and sperm into the currents where they fertilise together in the water. Kinko Bay, Japan. Photograph: Tony Wu/Wildlife Photographer of the Year

The listening bird by Nick Kanakis, US | Winner, behaviour: birds 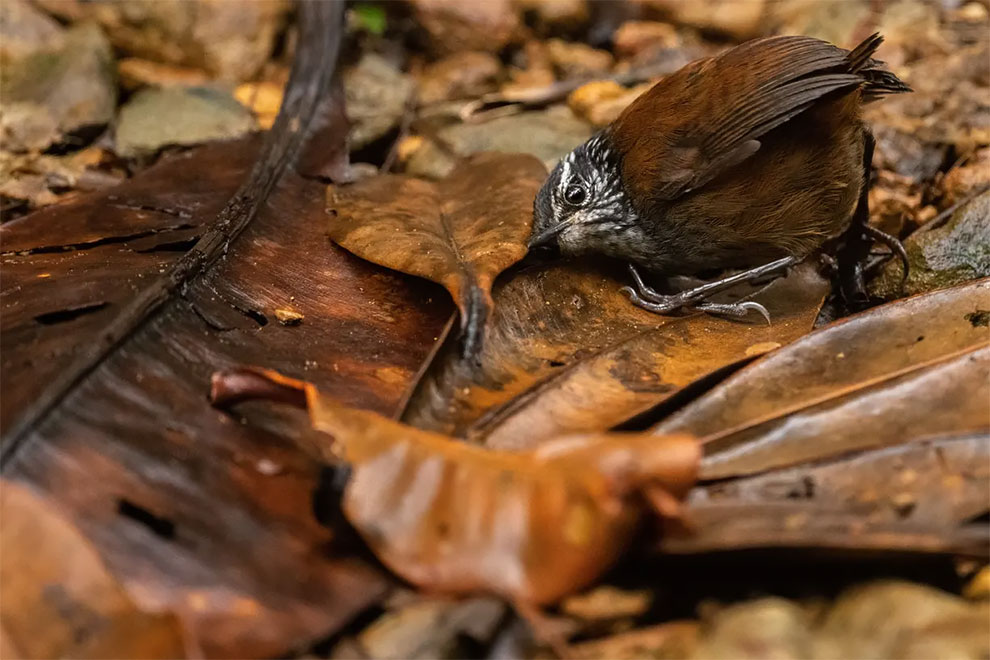 Kanakis spotted the young grey-breasted wood wren foraging. Knowing it would disappear into the forest if approached, he found a clear patch of leaf litter and waited. Sure enough, the little bird hopped into the frame, pressing its ear to the ground to listen for small insects. This prey-detecting technique is used by other birds, including the Eurasian blackbird. Grey-breasted wood wrens are ground-dwelling birds, often heard but not seen. Tatamá national park, Risaralda, Colombia. Photograph: Nick Kanakis/Wildlife Photographer of the Year 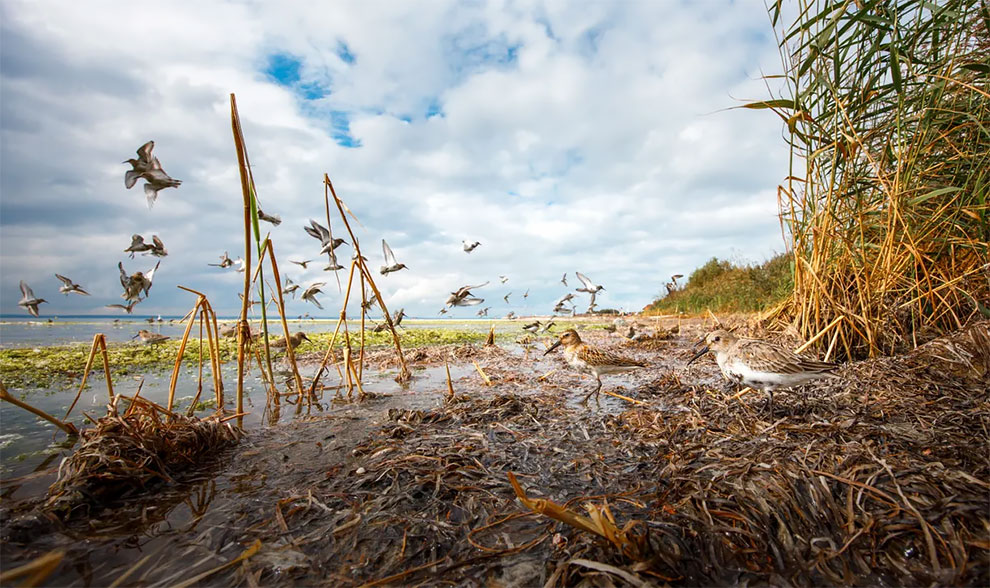 Placing his remote camera on the mud of the reed bed, Piesiak captured the moment when a passing peregrine falcon caused some of the dunlins to fly up. Winner of the Young Wildlife Photographer of the Year award when he was 14, Piesiak explored his locality during the Covid-19 lockdown, with carefully considered camera angles to produce a series of intimate photographs exploring the behaviour of birds. Photograph: Mateusz Piesiak/Wildlife Photographer of the Year

The Cuban connection by Karine Aigner, US | Winner, photojournalist story award – Why the caged bird sings 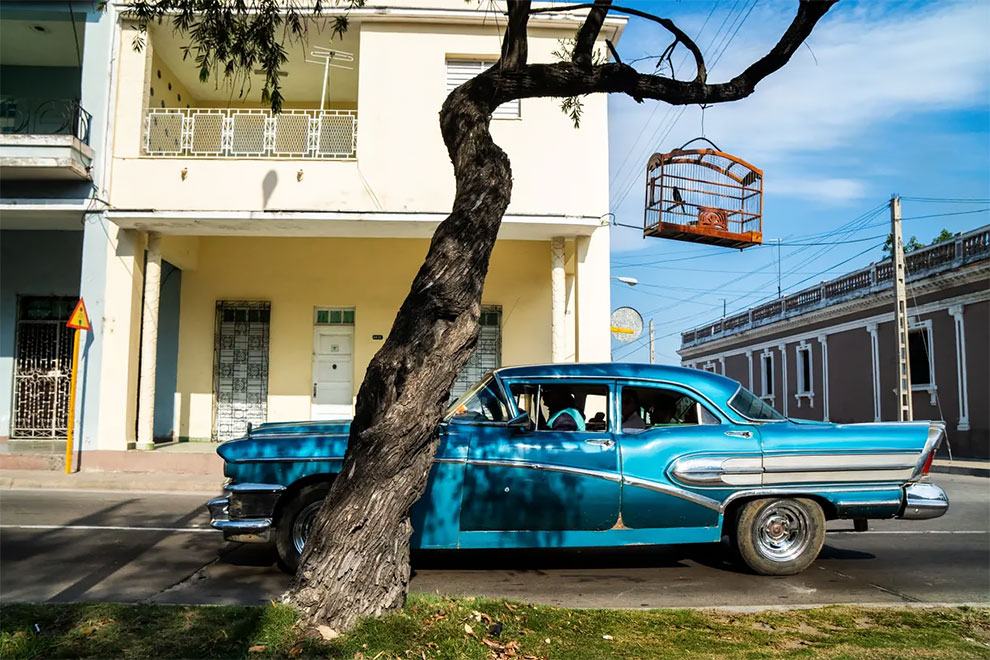 A Cuban bullfinch alongside a road so that it becomes accustomed to the hubbub of street life and less likely to be distracted during a competition. These birds are highly prized for their sweet voice and feisty spirit. Aigner explores the relationship between Cuban culture and songbirds, and the future of a deep-rooted tradition. For hundreds of years, some Cubans have caught and kept songbirds and held bird-singing contests. Photograph: Karine Aigner/Wildlife Photographer of the Year

Out of the fog by Ismael Domínguez Gutiérrez, Spain | Winner, 11-14 years 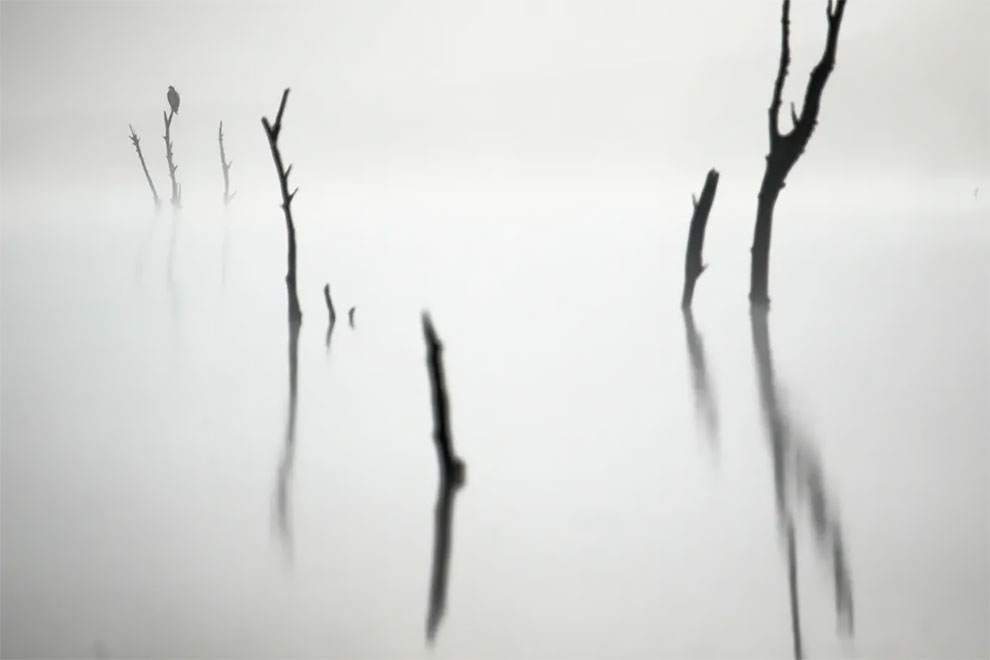 When Ismael arrived at the wetland, he was disappointed not to be able to see beyond a few metres – and certainly he had no hope of glimpsing the grebes he wanted to photograph. But as the fog began to lift, it revealed the opportunity for this striking composition. Ospreys are winter visitors to the province of Andalucía. Here the many reservoirs offer these widespread fish‑eating raptors shallow, open water that is clearer than many rivers and lakes. Embalse de Los Hurones, Cádiz, Spain. Photograph: Ismael Domínguez Gutiérrez/Wildlife Photographer of the Year

The beauty of baleen by Katanyou Wuttichaitanakorn, Thailand | Winner, 15-17 years 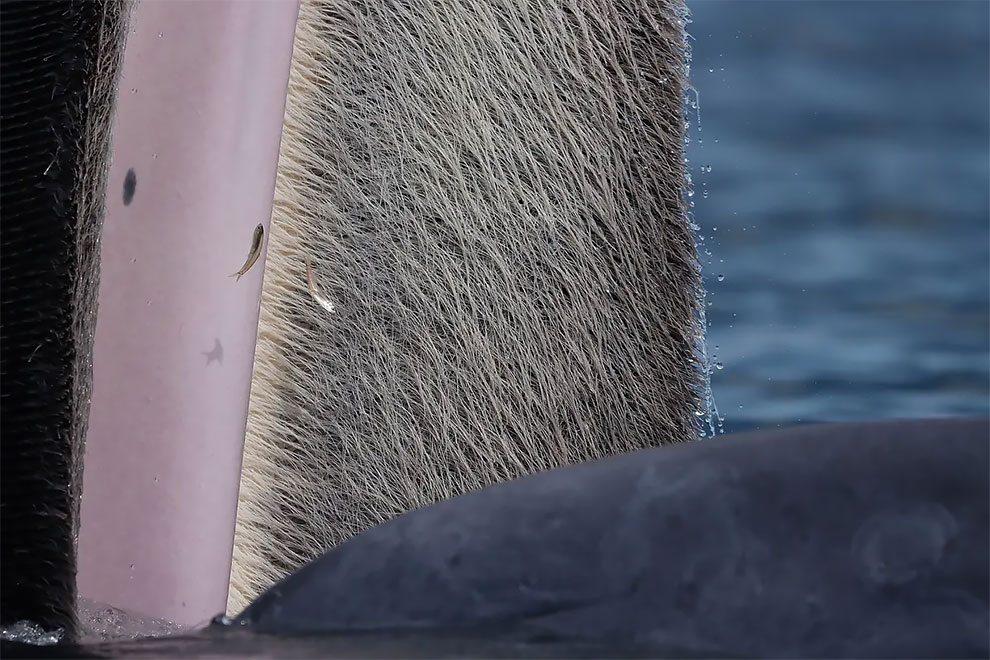 Katanyou is intrigued by the contrasting colours and textures of a Bryde’s whale. The tour boat he was travelling on turned off its engine as the whale appeared close by. This meant he had to steady his hands to capture this closeup as the boat rocked in the swell. Bryde’s whales have up to 370 pairs of grey-coloured plates of baleen growing inside their upper jaws. The plates are made of keratin and are used to filter small prey from the ocean. Upper Gulf of Thailand, Phetchaburi, Thailand. Photograph: Katanyou Wuttichaitanakorn/Wildlife Photographer of the Year 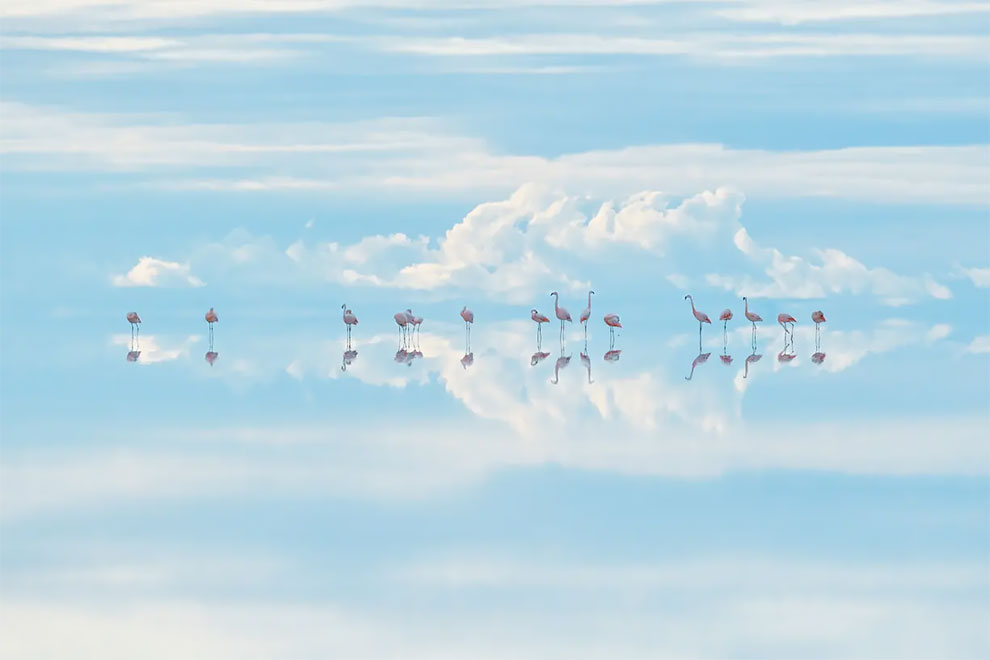 Takasago powers through altitude sickness to produce a dream-like scene. He crept towards the preening group of Chilean flamingos. Framing their choreography within the reflected clouds, he fought back his altitude sickness to capture this dream-like scene. High in the Andes, Salar de Uyuni is the world’s largest salt pan. It is also one of Bolivia’s largest lithium mines, which threatens the future of these flamingos. Lithium is used in batteries for phones and laptops. Daniel Campos province, Bolivia. Photograph: Junji Takasago/Wildlife Photographer of the Year

Battle stations by Ekaterina Bee, Italy | Winner, 10 years and under 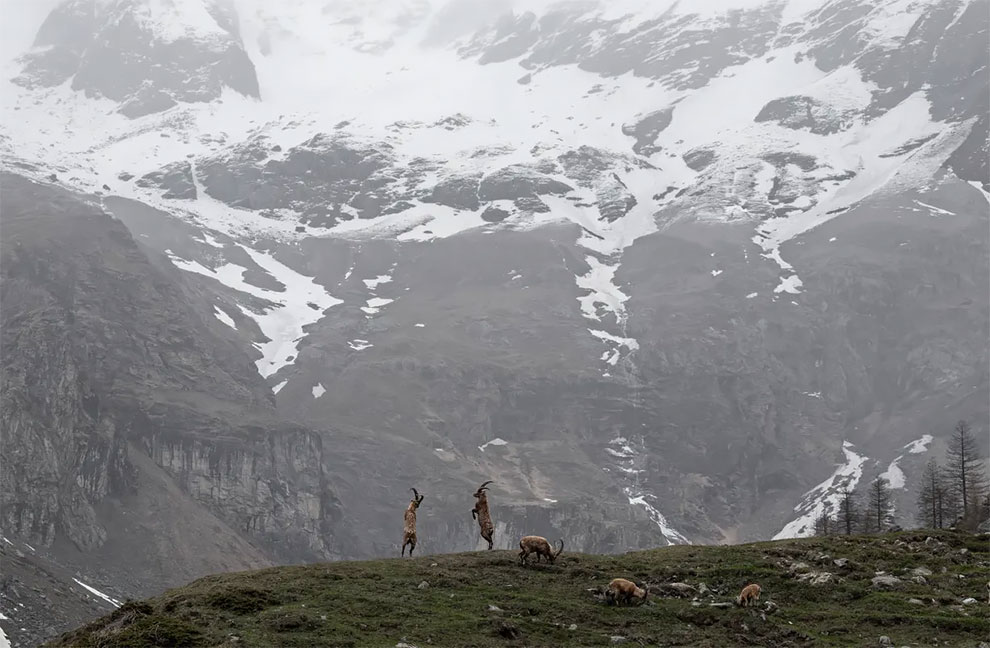 Ekaterina watches as two Alpine ibex spar for supremacy. It was near the end of a spring day trip with her family that she spotted the fight. The two ibex clashed horns and continued to trade blows while standing on their hind legs like boxers in a ring. In the early 1800s, after centuries of hunting, fewer than 100 Alpine ibex survived in the mountains on the Italy–France border. Successful conservation measures mean that, today, there are more than 50,000. Pian della Mussa, Piedmont, Italy. Photograph: Ekaterina Bee/Wildlife Photographer of the Year 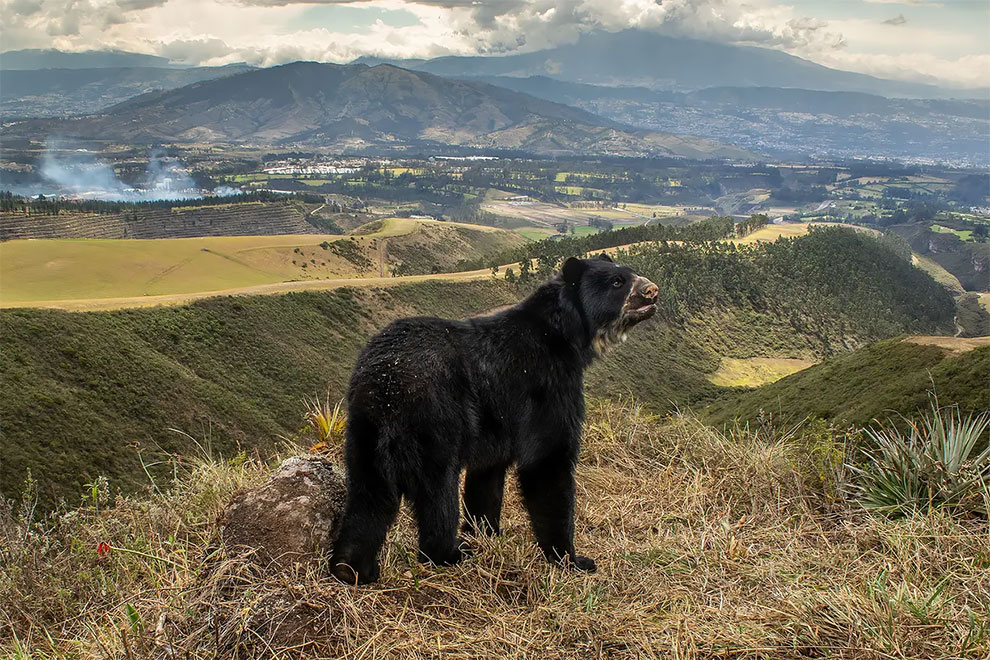 Mideros set up camera traps along a wildlife corridor used to reach high-altitude plateaus. He positioned the cameras to show the disappearing natural landscape with the bear framed at the heart of the image. These bears, found from western Venezuela to Bolivia, have suffered massive declines as the result of habitat fragmentation and loss. Around the world, as humans continue to build and farm, space for wildlife is increasingly squeezed out. Peñas Blancas, Quito, Ecuador. Photograph: Daniel Mideros/Wildlife Photographer of the Year 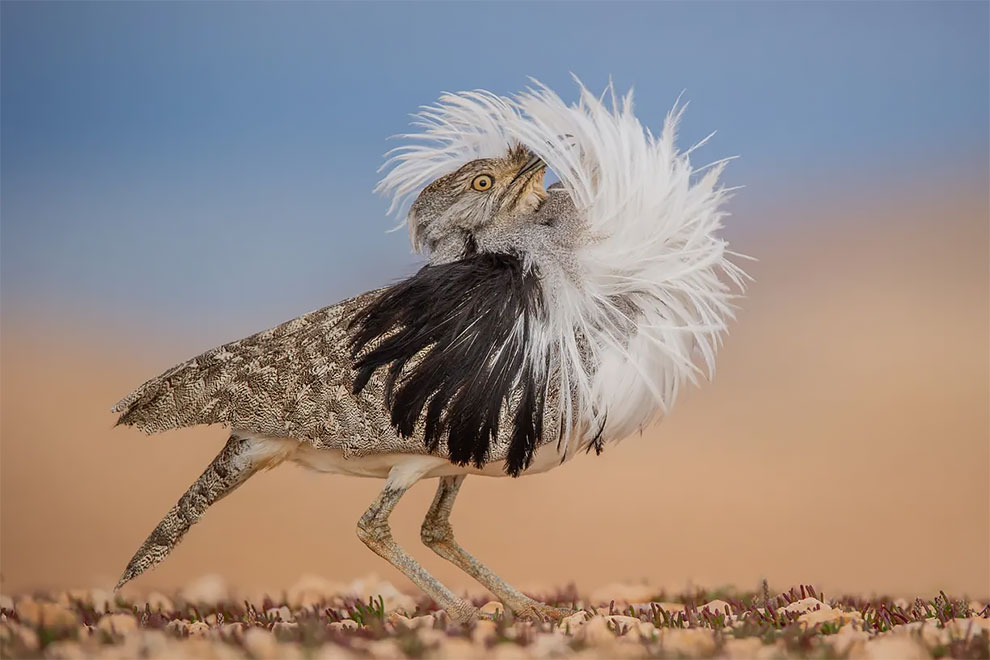 Hernández Martinez arrived at the bird’s courtship site at night. By the light of the moon, he dug himself a low hide. From this vantage point he caught the bird’s full puffed-out profile as it took a brief rest from its frenzied performance. A Canarian houbara male returns annually to its courtship site. Raising the plumes from the front of its neck and throwing its head back, it will race forward before circling back, resting just seconds before starting again. La Oliva, Fuerteventura, Spain. Photograph: José Juan Hernández Martinez/Wildlife Photographer of the Year 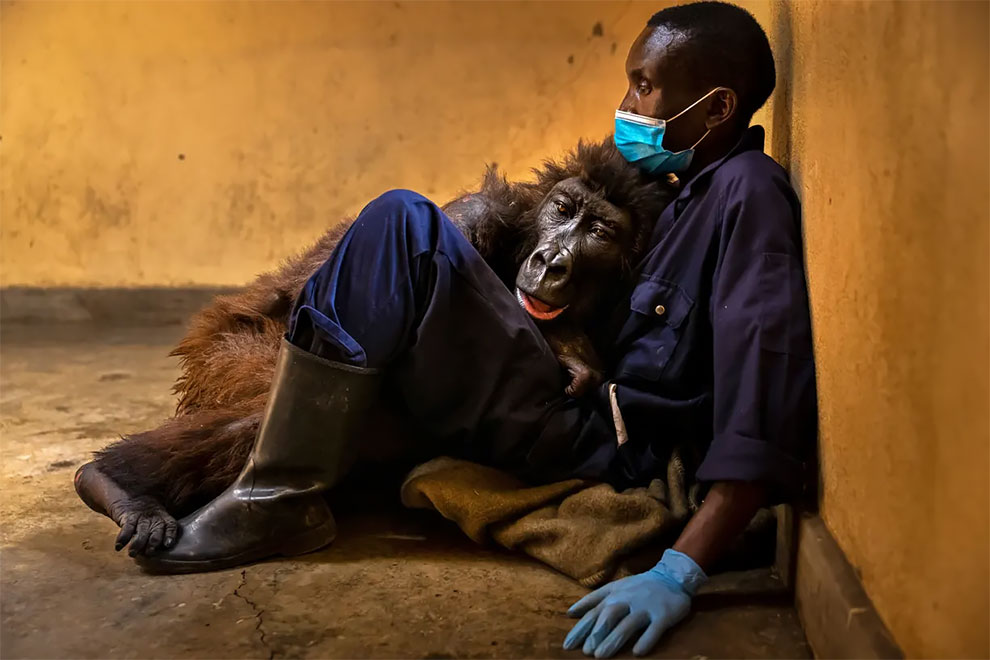 Stirton shares the closing chapter of the story of a much-loved mountain gorilla. He photographed Ndakasi’s rescue as a two-month-old after her troop was killed by a charcoal mafia as a threat to park rangers. Here he memorialised her death as she lay in the arms of her rescuer and caregiver of 13 years, ranger Andre Bauma. As a result of conservation efforts, mountain gorilla numbers have quadrupled to more than 1,000 in the last 40 years. Senkwekwe Centre, Virunga national park, the Democratic Republic of the Congo. Photograph: Brent Stirton/Wildlife Photographer of the Year 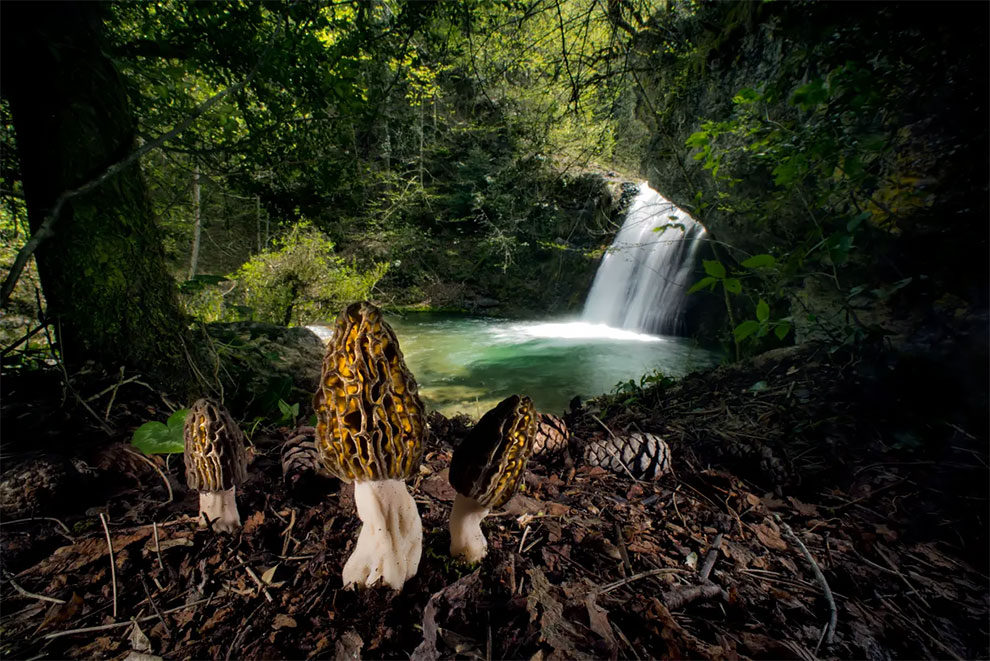 Enjoying the interplay between fungi and fairy tales, he wanted to create a magical scene. He waited for the sun to filter through the trees and light the water in the background, then used a wide-angle lens and flashes to highlight the morels’ labyrinthine forms. Morels are regarded as gastronomic treasures in many parts of the world because they are difficult to cultivate, yet in some forests they flourish naturally Mount Olympus, Pieria, Greece. Photograph: Wildlife Photographer of the Year 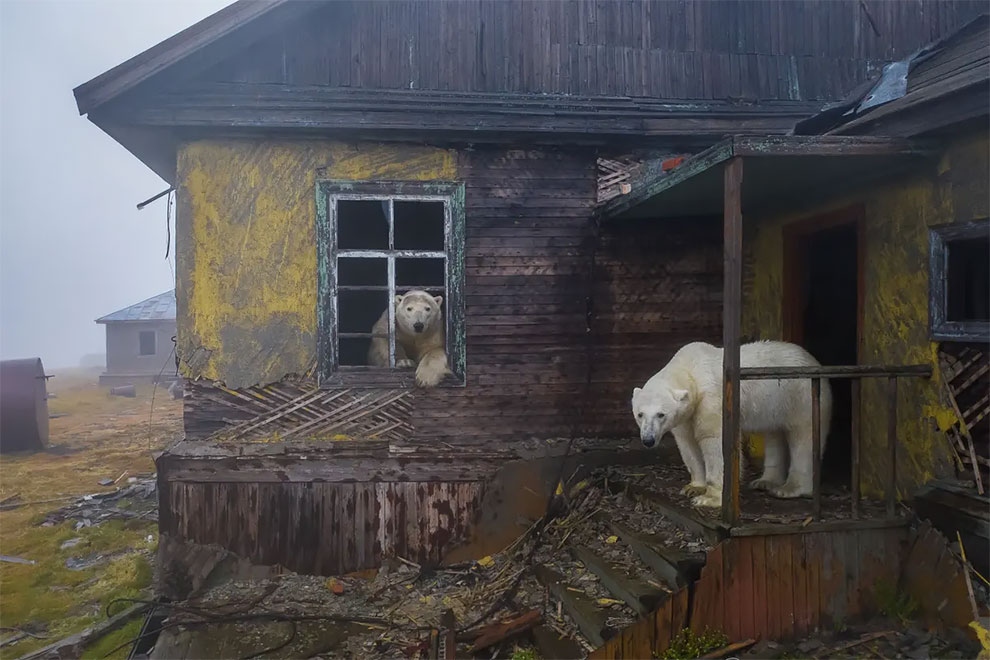 On a yacht, seeking shelter from a storm, Kokh spotted the polar bears roaming among the buildings of the long-deserted settlement. As they explored every window and door, he used a low-noise drone to take a picture that conjures up a post-apocalyptic future. In the Chukchi Sea region, the normally solitary bears usually migrate further north in the summer, after the retreating sea ice they depend on for hunting seals, their main food. Kolyuchin Island, Chukotka, Russia. Photograph: Wildlife Photographer of the Year 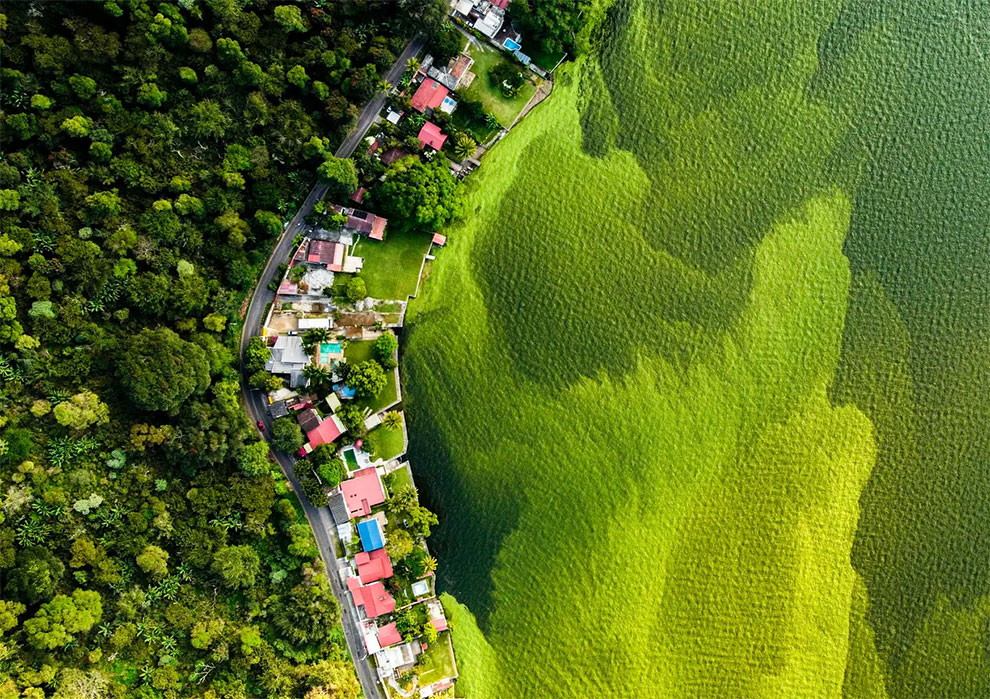 A drone view captures the contrast between the forest and the algal growth on Lake Amatitlán. Núñez took this photograph to raise awareness of the impact of contamination on the lake, which takes in around 75,000 tonnes of waste from Guatemala City every year. ‘It was a sunny day with perfect conditions,’ he says, ‘but it is a sad and shocking moment.’ Efforts to restore the Amatitlán wetland are underway but have been hampered by a lack of funding and allegations of political corruptionLake Amatitlán, Guatemala. Photograph: Daniel Núñez/Wildlife Photographer of the Year 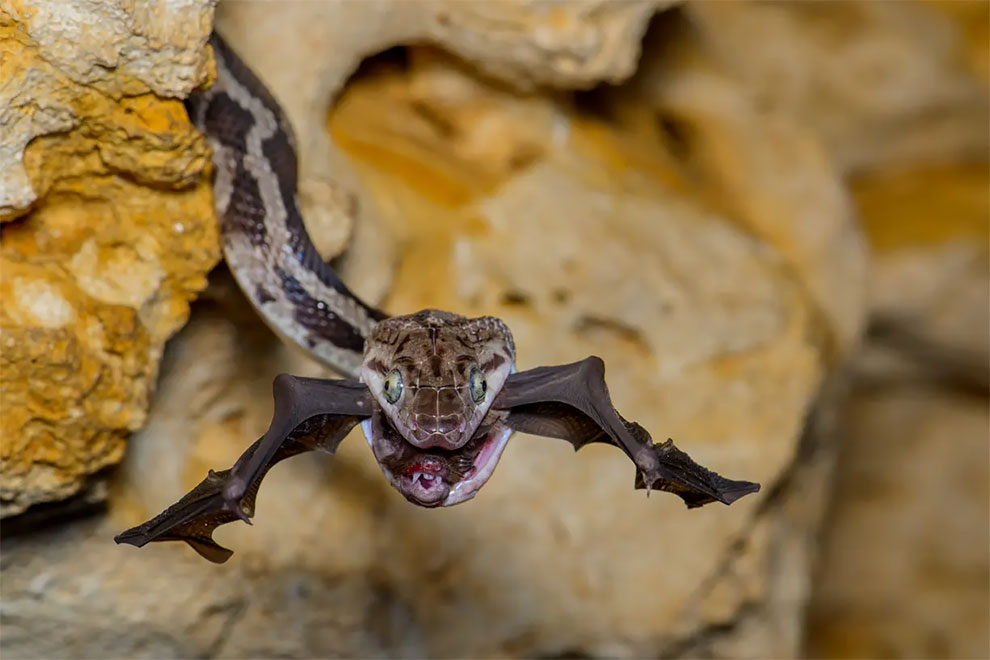 Belmar waits in darkness as a Yucatán rat snake snaps up a bat. Using a red light to which both bats and snakes are less sensitive, Belmar kept an eye on this Yucatán rat snake poking out of a crack. He had just seconds to get the shot as the rat snake retreated into its crevice with its bat prey. Every evening at sundown in the Cave of the Hanging Snakes, thousands of bats leave for the night’s feeding. It is also when hungry rat snakes emerge. Kantemó, Quintana Roo, Mexico. Photograph: Fernando Constantino Martínez Belmar/Wildlife Photographer of the Year 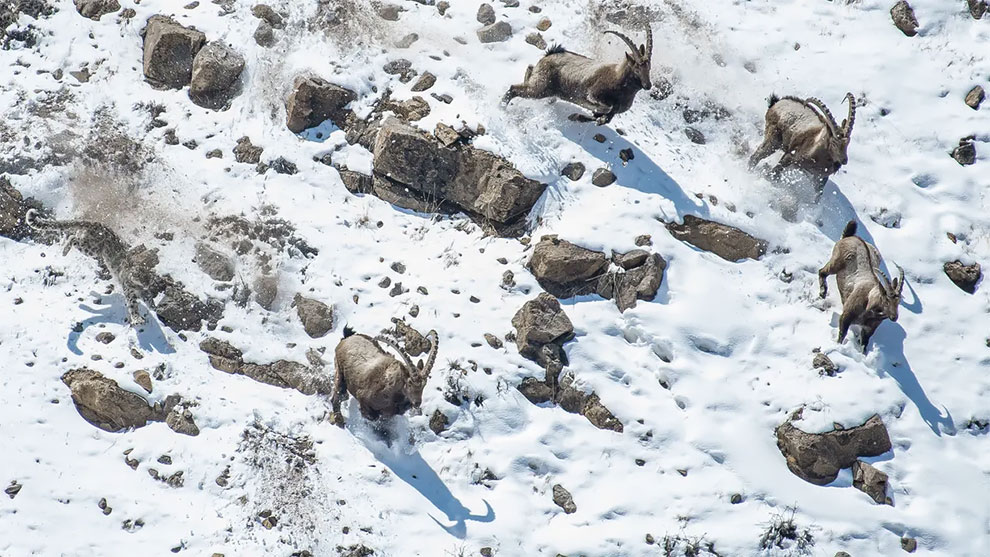 From a vantage point across the ravine, Nambiar watched the snow leopard manoeuvre uphill from a herd of Himalayan ibex. It was perfectly suited for the environment – unlike Nambiar, who followed a fitness regime in preparation for the high altitude and cold temperatures. Snow leopards live in some of the most extreme habitats in the world. They are now classed as vulnerable. Threats include climate change, mining, and hunting of both the snow leopards and their prey. Kibber wildlife sanctuary, Himachal Pradesh, India. Photograph: Anand Nambiar/Wildlife Photographer of the Year 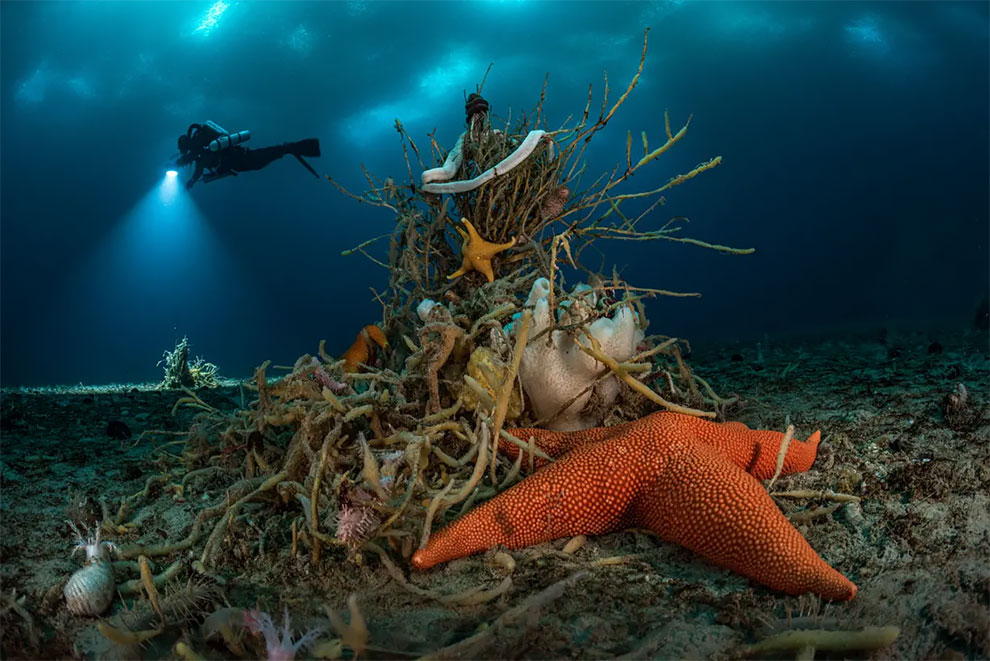 Living towers of marine invertebrates punctuate the seabed off Adelie Land, 105ft (32 metres) under east Antarctic ice. Here, a tree-shaped sponge is draped with life, from giant ribbon worms to sea stars. Ballesta endured below-freezing dives to reveal the diversity of life beneath Antarctica’s ice. His expedition, took two years to plan, a team of expert divers, and specially developed kit. His 32 dives in water temperature down to -1.7C included the deepest, longest dive ever made in Antarctica. Photograph: Laurent Ballesta/Wildlife Photographer of the Year

The big buzz by Karine Aigner, US | Winner, behaviour: Invertebrates and Wildlife Photographer of the Year 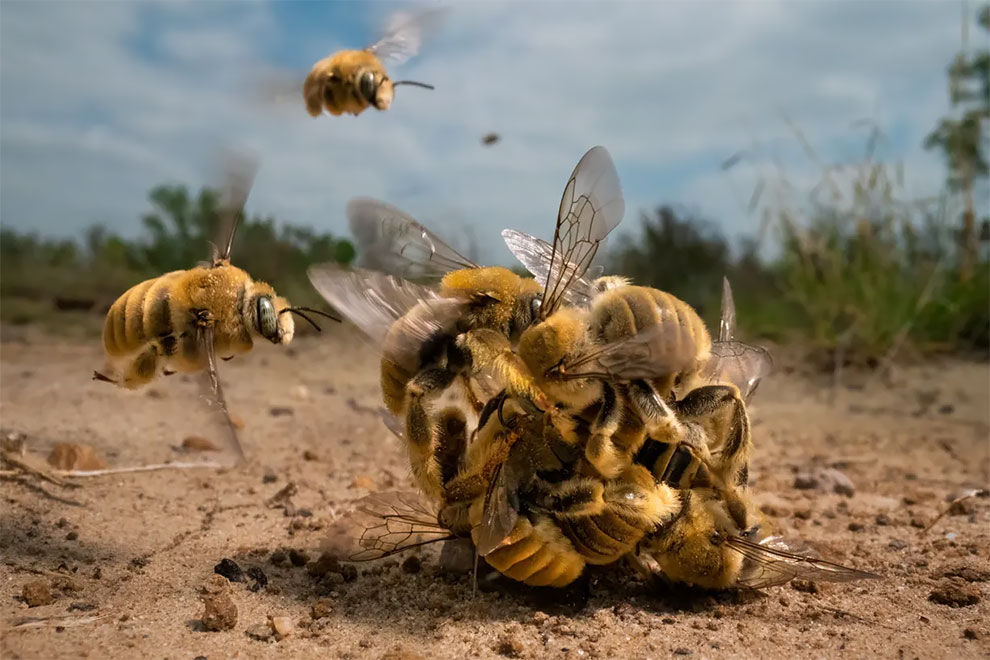 Using a macro lens, Aigner captured the flurry of activity as a buzzing ball of cactus bees spun over the hot sand. After a few minutes, the pair at its centre – a male clinging to the only female in the scrum – flew away to mate. The world’s bees are under threat from habitat loss, pesticides and climate change. With 70% of bee species nesting underground, it is increasingly important that areas of natural soil are left undisturbed. South Texas, US. Photograph: Karine Aigner/Wildlife Photographer of the Year