It’s the tale of two World Cups. One will be played on the field. The other will be in the streets of a moody nation not yet convinced that hosting the event was worth the price paid. Even so, many across Brazil — and around the world —can’t wait for the games to begin. 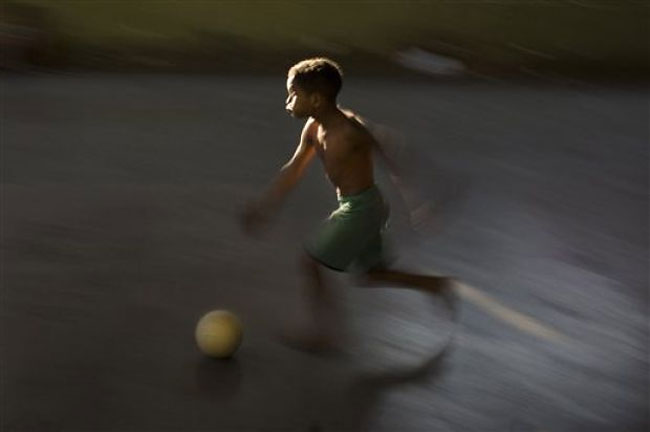 In this Monday, June 2, 2014, a youth runs with a soccer ball in a small court in the Mangueira slum of Rio de Janeiro, Brazil. The practical obstacles in accessing the Maracana stadium, located less than half a kilometer away, to watch World Cup games haven’t dampened the boys’ passion for what Brazilians call the “beautiful game.” (AP Photo/Leo Correa) 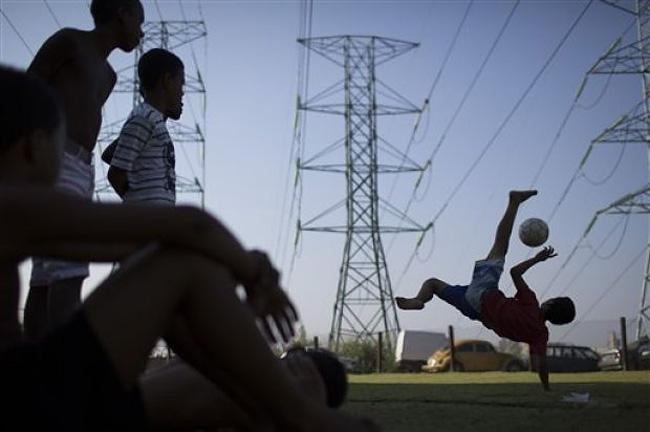 Boys watch as another boy practices his soccer bicycle kicks at a Rio de Janeiro slum, Brazi, Monday, June 9, 2014. The 2014 Word Cup soccer tournament is set to begin in just a few days, with Brazil and Croatia playing in the opening match on June 12. (AP Photo/Felipe Dana) 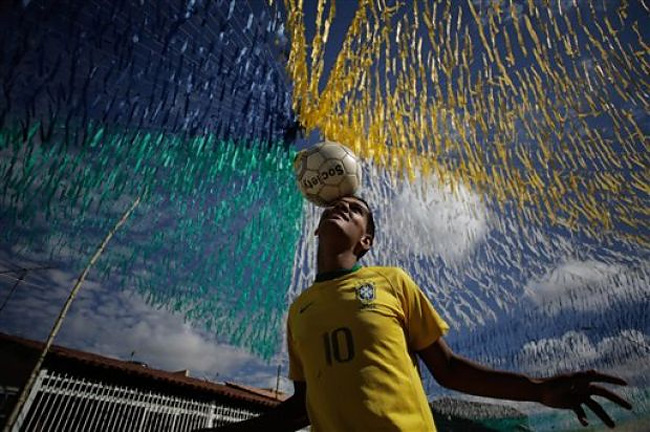 In this June 4, 2014, photo, Joao Paulo, 16, plays ball in a street decorated for the upcoming World Cup in the Ceilandia suburb of Brasilia, Brazil. The international soccer tournament is set to begin next week. (AP Photo/Eraldo Peres) 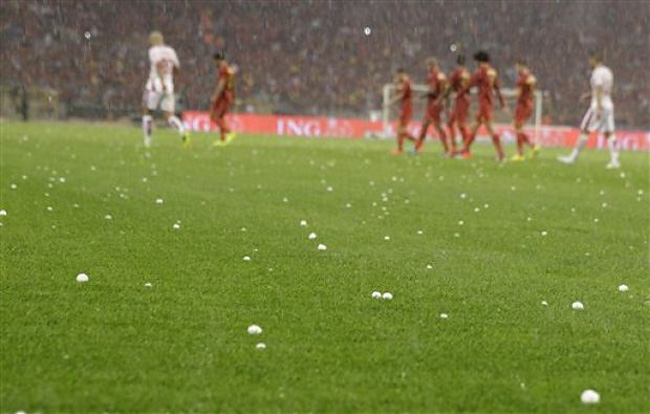 In this June 7, 2014, photo, Belgium’s and Tunisia’s team take shelter during a hail storm during a friendly soccer match at the King Baudouin stadium in Brussels. Belgium will play against South Korea, Russia and Algeria in Group H of the World Cup 2014 in Brazil. (AP Photo/Yves Logghe) 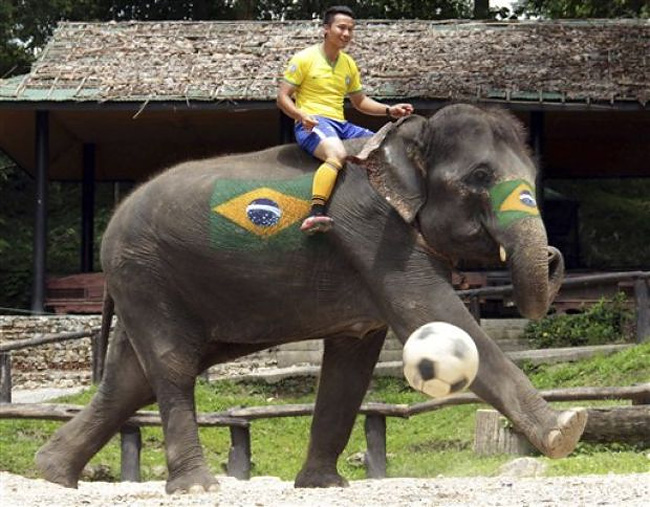 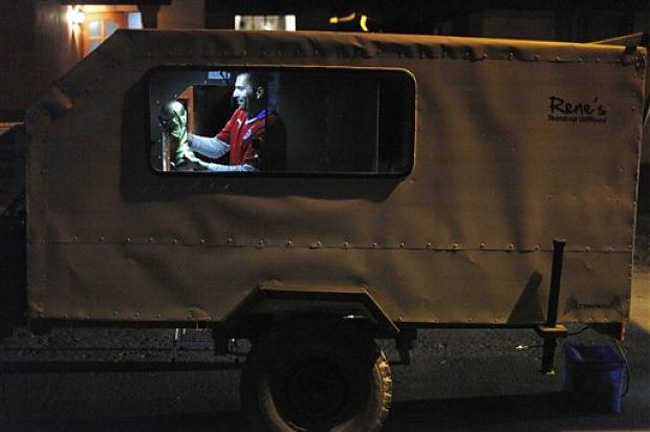 In this June 5, 2014, photo, Chile soccer fan Cristian Uribarri holds up his replica of the World Cup trophy as he decides if he should take it and where to put it in his trailer, which he built from scratch, as he packs it for the next day’s journey with four friends to Brazil from Santiago, Chile. The shiny contraption they call their “Lunar Vehicle” has air conditioning, a stove, an LCD TV, a Playstation and a queen-sized mattress. Using the mini-home on wheels will save them on lodging and meals. (AP Photo/Luis Hidalgo) 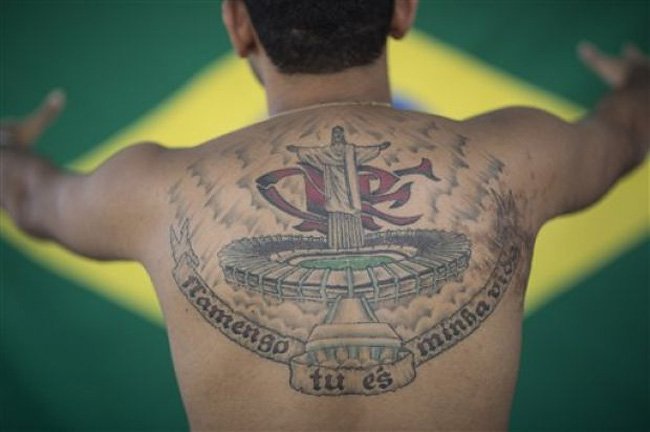 In this May 30, 2014 photo, Felipe da Costa Almeida poses for a photo showing his tattoo of the Christ Redeemer statue over the Maracana stadium, backgrounded by the Flamengo club initials in Rio de Janeiro, Brazil. The tattoo reads in Portuguese, “Flamengo you are my life.” Almeida said “I got the tattoo in early 2009, and later that year Flamengo won the Brazilian championship.” (AP Photo/Felipe Dana) 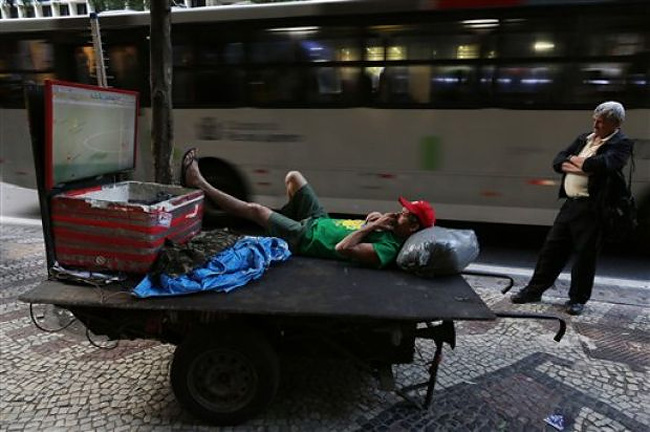 In this June 3, 2014, photo, Elias Vieira, 40, watches the friendly soccer game between Brazil and Panama on a flat screen television set while laying on his handcart, on a sidewalk in downtown Rio de Janeiro, Brazil. The World Cup is set to begin at June 12. (AP Photo/Leo Correa) 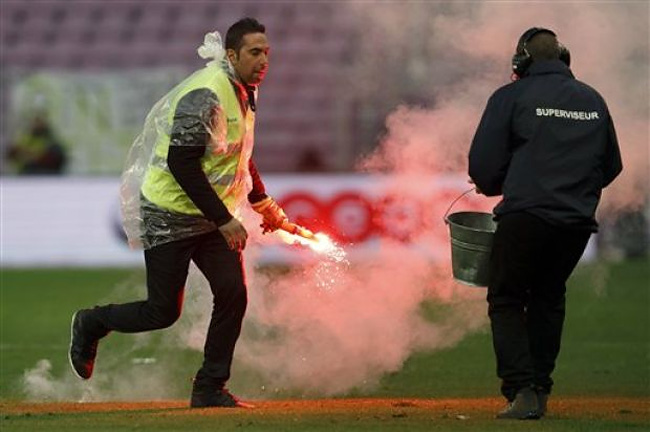 In this June 4, 2014, photo, A member of security staff removes a torch during the international friendly soccer between Algeria and Romania, at the Stade de Geneve stadium, in Geneva, Switzerland. World Cup-bound Algeria beat Romania 2-1 in a warm-up match on Wednesday marred by widespread fan disorder. The teams were taken off the field after 43 minutes and Algeria coach Vahid Halilhodzic appealed for fans to stop throwing lit flares and bottles. (AP Photo/Salvatore Di Nolfi, Keystone) 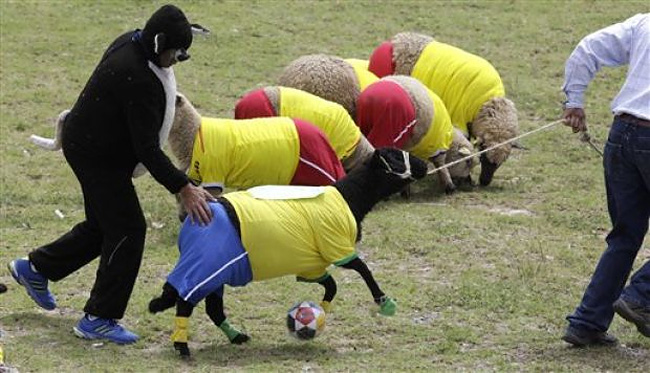 In this June 1, 2014, photo, Shepherds herd a sheep dressed in jersey of Brazil’s national soccer team, during a soccer sheep match between Brazil and Colombia in Nobsa, Colombia. The match was part of the International Poncho Day, celebrated every year in this region of central Colombian where local craftsmen make sheep wool ponchos using ancestral techniques. (AP Photo/Javier Galeano) 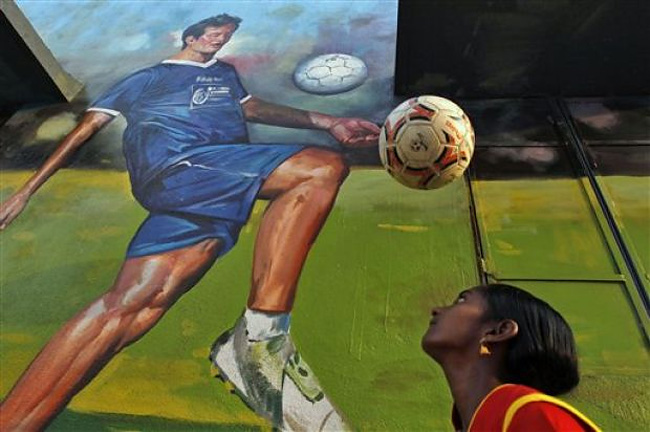 In this June 4, 2014, photo, a girl heads a ball in front of a mural of India’s former soccer captain Baichung Bhutia at a playground in Chennai, India. Soccer fans around the world are gearing up to watch the upcoming World Cup soccer tournament in Brazil. (AP Photo/Arun Sankar K.) 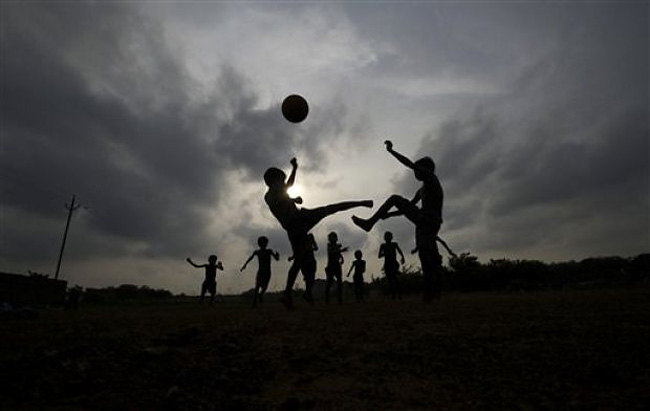 In this June 8, 2014 photo, children play soccer at a playground in Bhubaneswar, India. Soccer fans around the world are gearing up to watch the World Cup soccer tournament starting June 12 in Brazil. (AP Photo/Biswaranjan Rout) 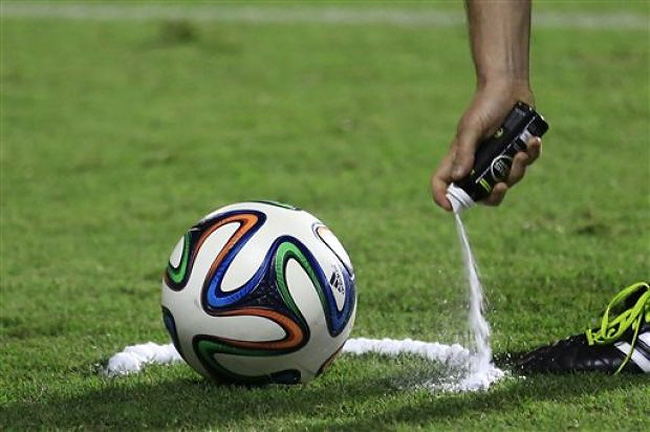 In this June 6, 2014, photo, a referee uses vanishing spray during a referee’s training session in Rio de Janeiro, Brazil. Referees will use vanishing spray during 2014 World Cup to stop defensive walls creeping forward at free-kicks. The international soccer tournament is set to begin in a few days, with Brazil and Croatia competing in the opening match on June 12. (AP Photo/Hassan Ammar) 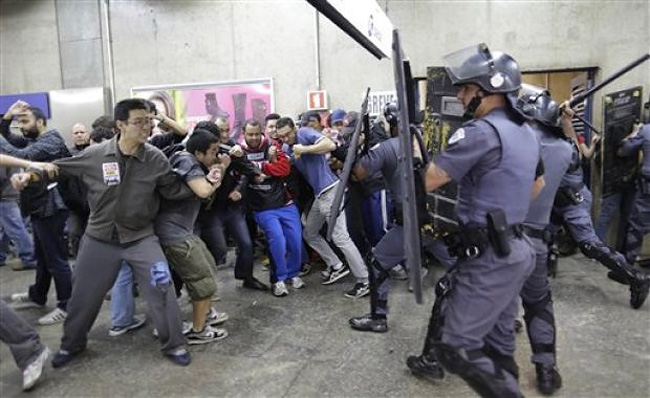 In this June 6, 2014, photo, subway train operators, along with some activists, clash with police at the Ana Rosa metro station on the second day of their metro strike in Sao Paulo, Brazil. The workers clashed with police as they tried to block other operators from breaking the strike. Overland commuter train operators went on strike Thursday, putting at risk the only means that most soccer fans will have to reach Itaquerao stadium ahead of next week’s World Cup. (AP Photo/Nelson Antoine) 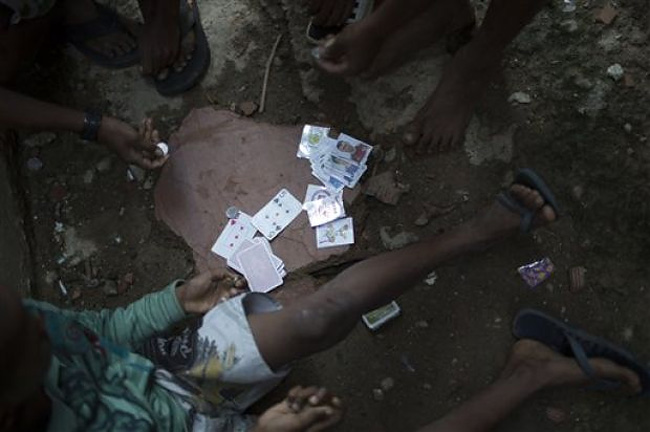 In this June 3, 2014, photo, boys play cards, betting coins and World Cup album stickers at a slum in Rio de Janeiro, Brazil. The Word Cup soccer tournament is set to begin in just a few days, with Brazil and Croatia playing in the opening match on June 12. (AP Photo/Felipe Dana) 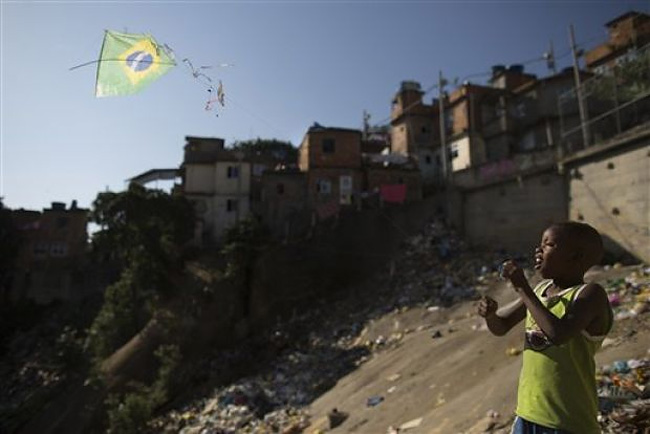 In this June 2, 2014 photo, a youth flies a kite in the likeness of Brazil’s flag on a hillside in the Mangueira slum in Rio de Janeiro, Brazil. Brazil is hosting this year’s World Cup soccer tournament that starts this week. (AP Photo/Leo Correa) 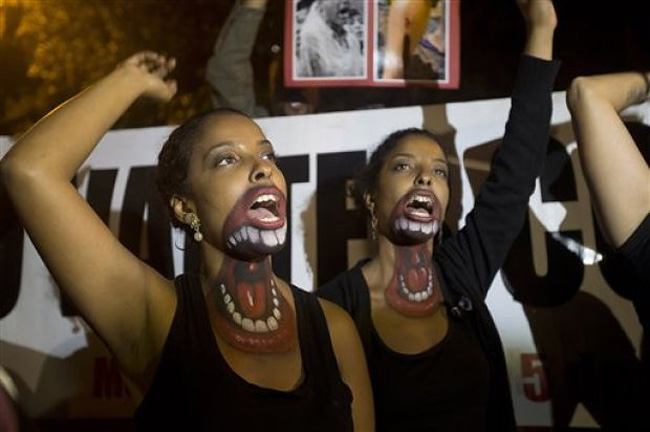 In this June 3, 2014 photo, women protest with mouths painted on them, demanding better salaries and labor conditions in Rio de Janeiro, Brazil. The protest was against the money being spent on the upcoming World Cup, which demonstrators say would have been better used on education. (AP Photo/Silvia Izquierdo) 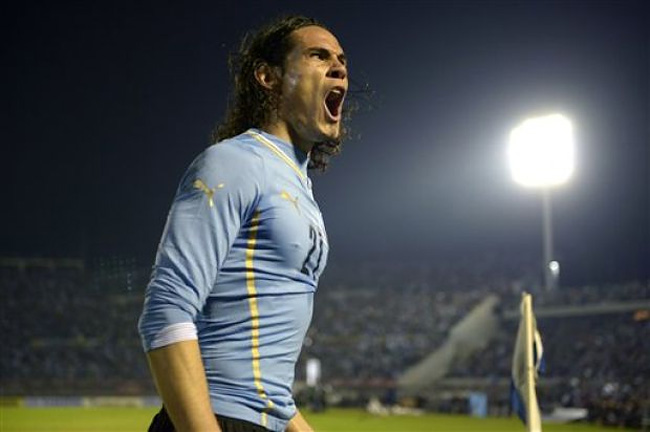 In this June 4, 2014, photo, Uruguay’s Edinson Cavani celebrates after scoring against Slovenia during a friendly soccer match in Montevideo, Uruguay. (AP Photo/Matilde Campodonico) 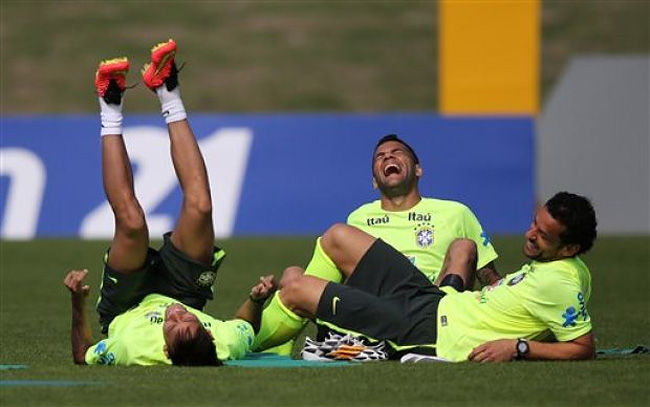 In this June 1, 2014, photo, Brazilian palyers Neymar, left, Daniel Alves, center, and Fred joke around after a practice session at the Granja Comary training center in Teresopolis, Brazil. Brazil’s team will travel this Sunday for the team’s warm-up against Panama on Tuesday in preparation for the World Cup soccer tournament that starts on 12 June. (AP Photo/Leo Correa) 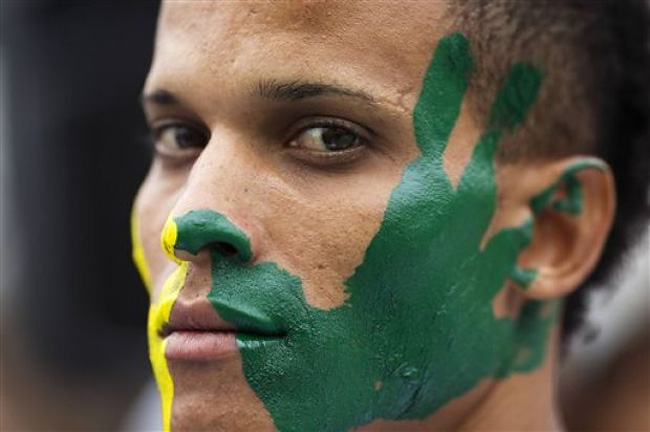 In this June 2, 2014, photo, an inmate poses for a picture during the opening ceremony of the football championship for prisoners at the Castro Castro Prison, in Lima Peru. Peru’s prison service organized a championship between inmates of various jails just ten days from the start of the World Cup in Brazil. (AP Photo/Rodrigo Abd) 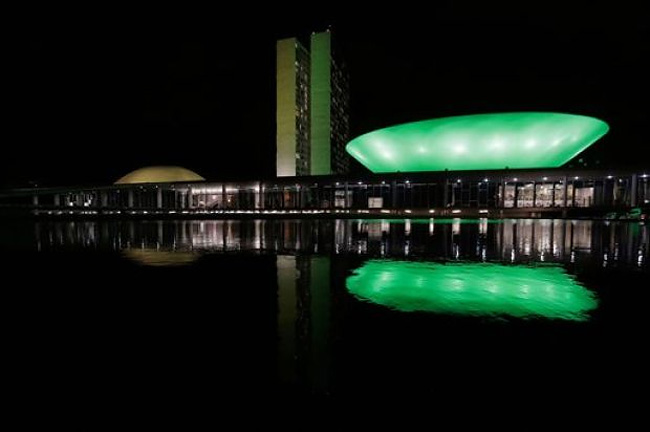 This June 2, 2014, photo, shows a general view of the the Brazilian National Congress building, decorated with green and yellow light, the colors of Brazil, in honor of FIFA World Cup, in Brasilia, Brazil. The World Cup will open on June 12 with Brazil playing Croatia in Sao Paulo. (AP Photo/Eraldo Peres) 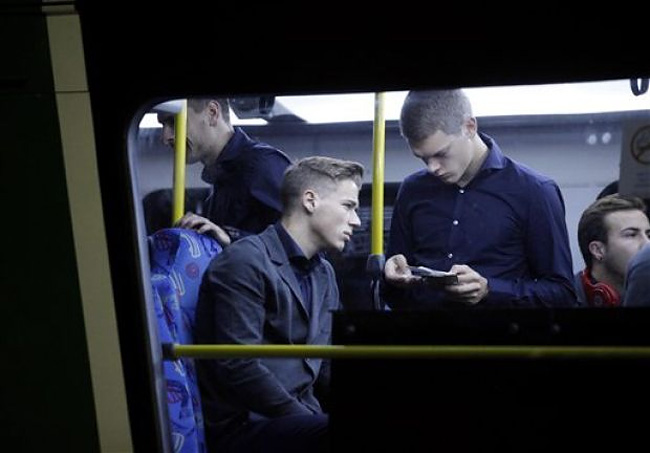 In this June 8, 2014 photo, Germany’s soccer player Erik Durm, left, and Matthias Ginther are seen inside a bus as they arrive at the International airport in Salvador, Brazil. Germany’s national soccer team arrived in Salvador to continue their preparations for the upcoming 2014 World Cup, which starts on June 12. (AP Photo/Raul Spinasse)