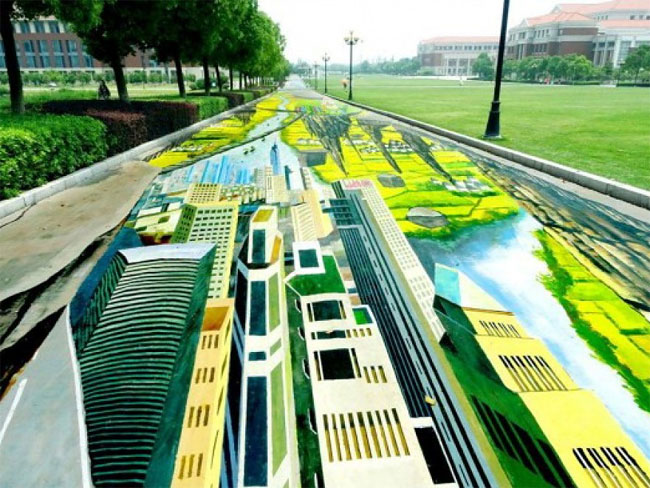 The 365-meter long street painting titled “Rhythms of Youth” was presented to the public for the first time on a lane on the campus of the Nanjing branch of the Communication University of China(CUCN) on Wednesday. The gigantic 3D street painting, or anamorphic painting, covering an area of more than 2,600 square meters, has set two new Guinness World Records as the world’s largest and longest street painting. Its creators led by famous Chinese artist Yang Yongchun were awarded the certificate by the Guinness World Records, the global authority on record-breaking, on Tuesday at a ceremony held in the university. 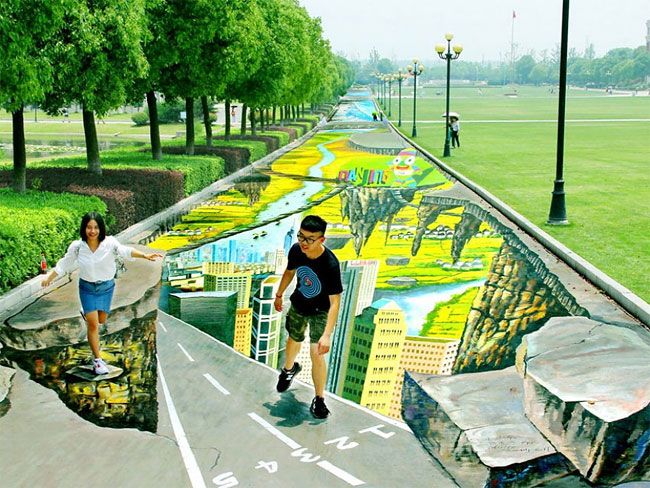 “It took my team more than 20 days to finish the painting on the ground. Every day, we worked on it from daybreak when we could barely tell the colors apart until it turned too dark to see anything. We’ve devoted all of our time, energy and attention to this painting,” said Yang Yongchun. 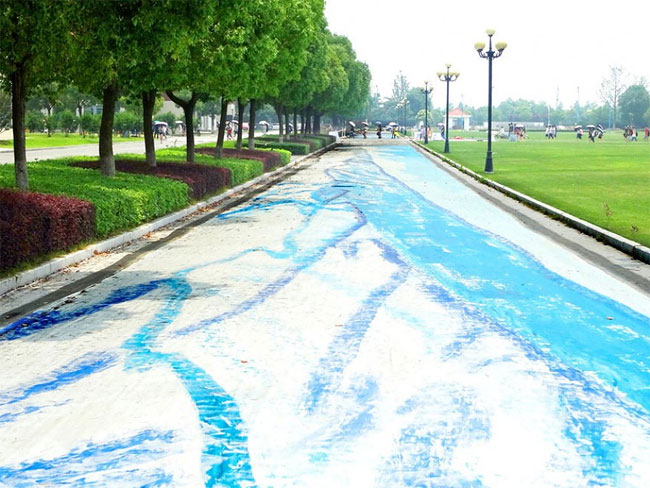 The painting “Rhythms of Youth” features in the Youth Olympic Games and the Nanjing cityscape, including the painting of the games’ mascot Lele, the bird view of major architectures in Nanjing and the Yangtze River that runs through the city.

Funny Cartoons That Perfectly Describe Life In Silicon Valley
Man Reimagines His Life With Kendall Jenner In Humorous Photo Edits
Portrait of Steve Jobs Made With Apples
You'd Better Buy Her Some Flowers
30 Of The Most Epic 3D Tattoos
Stunning Oil Paintings Of Tattooed Women By Chris Guest
Young Artist Documents Her Daily Struggles Of Learning To Draw
A Rainbow of Vegetation Consumes a 7-Story Building in a New Mural from ‘Blu’ in Rome
Hyperrealistic Composites And Surreal Digital Manipulations By Adrian Sommeling
Toilets Around the World
Guy Leaves Hilarious “Shopping Tips” In Grocery Store
Creative Advertisements by Asile Studio
The Superb Futristic Dashboards and Floating UIs by Sebastian Stapelfeldt
Hilariously Threatening Warning Signs
The Vivid Surrealism Of Quentin Deronzier
Lego Lost At Sea: An Online Museum Of Plastic Toys Lost At Sea In 1997
Plus-Size Woman Asks 21 Photoshop Editors To Make Her Beautiful
See The Optical Illusion Noise-Canceling Headphone Ads That Got Cannes Listening
We Are Just Grains of Sand on This Earth: Tomás Sánchez Draws Giant Forests and Massive Landcapes
These Humorous Stinker Station Signs Helped to Provide Comic Relief for Motorists in Idaho During the 1950s and ’60s
Japanese Painter Uses Blackened Eyes and Expressions to Create Social Commentary
Italian Artist Roberto Rizzo Turns Rocks Into Incredible Animal Paintings
This Is How You Deal With People Who Don’t Park Between The Lines
Catch Me If You Can: The Superb Contemporary Surreal Paintings By Leegan Koo
debuts, largest, longest, painting, street, world